What defines the greatest driving roads in the world? There are many but here are some of our top choices. These roads are scenic and yet require some driving finesse... some more than others. Agree or disagree with our choices? Let us know in the comments section.

What defines the greatest driving roads in the world? There are many but here are some of our top choices. These roads are scenic and yet require some driving finesse... some more than others. Agree or disagree with our choices? Let us know in the comments section.

This road could be considered a work of art. It is an 8.3 km section of the Norwegian National Road. It is a large tourist attraction for locals and visitors and is a known fishing spot – one of the bridges was specifically designed for fishing. The road is also used as a backdrop for many auto commercials. The road travels through an archipelago in Eide and Averøy in Møre og Romsdal, Norway. The route was started in the 1983 and was completed in July of 1989. The cost was $122 million Norwegien Krone (about $20 million Canadian). 25% of the cost was financed by tolls – the government estimated it would take 15 years to pay off that portion. However, the road was paid off in 10 years and the tolls were removed. Imagine that. In 2006, The Guardian declared this to be the World’s Best Road Trip.

2. The Alcan Highway, Canada to Alaska 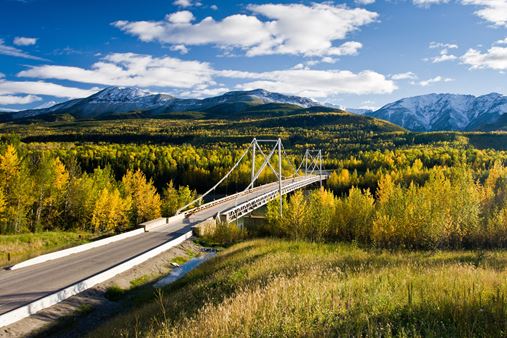 
Also known as “The Alaska Highway” or "Alaska-Canadian Highway”, this road was constructed during WWII in order to connect the State of Alaska to the rest of the United States through Canada. When completed, the highway was 2,700 km long. Currently, it is only 2,200 km long – the shortening is due to re-routing and simplifying the road. Amazingly, the highway is paved the entire stretch and is open year-round. Working on the road would have been no easy task. The recruitment ad stated they were looking for men who could work and live in the most extreme conditions imaginable. Temperatures ranged from -70°F to 90°F. The men had to work through swamps, rivers, ice, insects and obviously the cold. The highway connects Dawson Creek, BC to Delta Junction, Alaska. Planning a trip to the region? Be sure to purchase The Milepost - “The Bible of North Country Travel” Since 1949. The cost (without labour included) was $138 million. 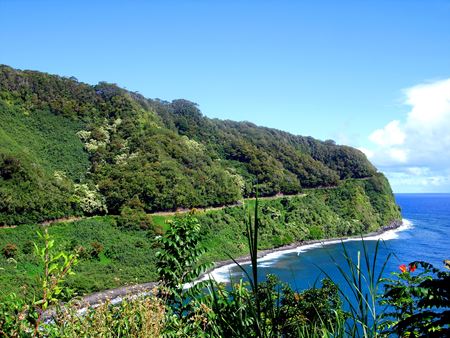 
This drive is really for those who LIKE to drive. The Road to Hana stretches just over 100 km from Kahului to the town of Hana in east Maui. This is one of the most beautiful drives but make sure you give yourself time. Though not that long, there are many one lane sections and the road is incredibly winding and narrow. There are 59 bridges – 46 of which are one lane only. This is best suited for small cars and motorcycles. What can you expect to see along the way? Waterfalls, cliffs, mountains, rain forests, beach access, animals… basically everything Hawaii has to offer. The Road to Hana is really about the experience – not the destination. Parts of the road are treacherous and many major car rental companies forbid driving the dirt road past Route 31 as it is a hot spot for landslides and is pretty rough. The highway ends at the 'Ohe’o Gulch, or more commonly known as the Seven Sacred Pools. This is an amazing series of waterfalls and pools inside the Haleakala National Park. 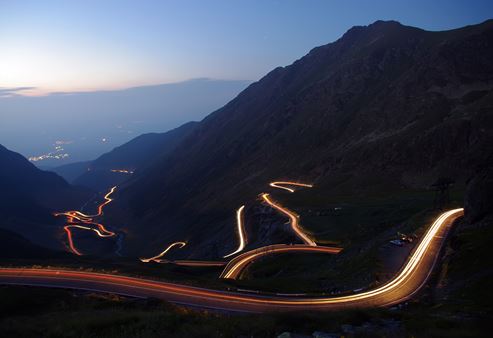 
The Transfagarasan Road, also know as the DN7C, is the second-highest paved road in Romania after the Transalpina. It was initially built for military purposes and stretches 90 km across the tallest sections of the Fagaras mountains. This is a very winding road… not to be done when tired. The road was completed in 1974 in response to a possible invasion by the Soviet Union. (The Soviet Union had invaded neighbouring Czechoslovakia in 1968) The road was primarily built by military personnel – and many lost their lives in the process. The government claims around 40 died, though survivors on this project put this number in the hundreds. Due to the high altitude, hair raising hairpin turns, long S-curves and sharp descents this road is generally open from June to October. Fan of tunnels? This road has 5 tunnels including one (880 m long) near the highest point at Bâlea Lake. Just be aware – the road in this tunnel is always wet. There are many places to stop along the way for food, lodging, sightseeing and even bungee jumping. There is also the Poienari fortress near the village of Arefu. This castle is where Vlad III the Impaler lived – a prince who inspired Bram Stoker’s character Dracula. The castle sits at the top of a high and remote cliff. Visitors can get to the citadel if fit enough to climb the 1480 steps. If you are a Top Gear follower you will know this is one of their favourite places to film. In 2009, Jeremy Clarkson declared this as the Best Road in the World. 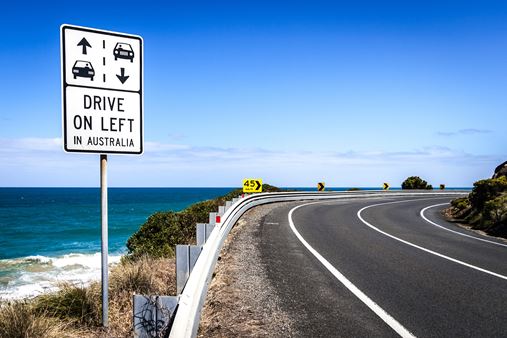 
This has got to be one of the most scenic coastal drives in the world. This road follows the south-eastern coast of Victoria connecting Torquay and Allansford. Along the almost 250 km of road you can view iconic surf breaks, waterfalls and the 12 Apostles. Stop to walk along the Great Ocean Walk, a journey from Apollo Bay to the 12 Apostles. This is a 104 km coastal route but you can walk sections/trails at many points. Discover National Parks, wildlife, deserted beaches, rain forests , shipwreck sites and marine sanctuaries. This road took 13 years to build and was completed in 1932. It was built by approximately 3,000 returned soldiers and is the world’s largest war memorial. This 2-lane highway has sections that travel along almost-vertical cliffs – road signs warning of rock falls are in place in sections prone to falling debris. 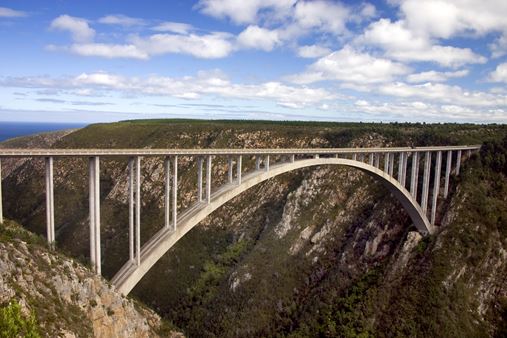 
The Garden Route is a scenic drive on the south-eastern coast of South Africa and is a great eco-tourism destination for hikers and adventure seekers. Typically there are mountains on one side and the Indian Ocean on the other. It connects Mossel Bay in the Western Cape to the Storms River in the neighbouring Eastern Cape. Along the stretch of road you will cross bridges, and view diverse vegetation, lagoons, and lakes. There is plenty to see and do along the route including modern golf courses, ancient forests, secluded artists’ communities and beaches where if you are lucky may spot dolphins, seals, killer whales or humpback whales.  Careful in these waters, shark attacks along this route land these waters in 3rd place on Lonely Planet’s list of the world’s worst shark infested beaches. The Garden Route has an oceanic climate and is the second mildest climate in the world after Hawaii. Temperatures range from 10°C in winter to 28°C in the summer. 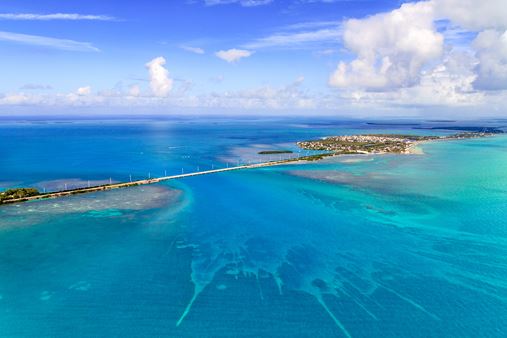 
This is a 200 km highway connecting U.S. Route 1 through the Florida Keys. The original road was completed in 1912 but sections were destroyed in the 1935 Labor Day Hurricane. Unable to finance the rebuild, the Florida East Coast Railway sold the remaining road and bridges to the state of Florida for $640,000 US.  Much of the original highway was built on former railroad lines and trusses. Over the next couple decades improvements were made to the roads, bridges and additional extensions were added to provide better access for the US Navy who had large operations during WWII in the Keys. The Overseas Highway was essentially rebuilt in the 1980’s. This region is a delicate ecosystem and local, state and national agencies are working towards protection measures. The Florida Keys Overseas Heritage Trail is a planned 171 km paved pedestrian and cycling trail in development. As of 2011, about 110 km had been completed. When finished it will connect the island of Key Largo to the island of Key West. The trail is closed to motorized vehicles.  The Florida Keys is also a world hot spot for real estate. The combination of tropical weather, sense of community / life style, green initiatives and limited inventory has resulted in high prices and waiting lists. 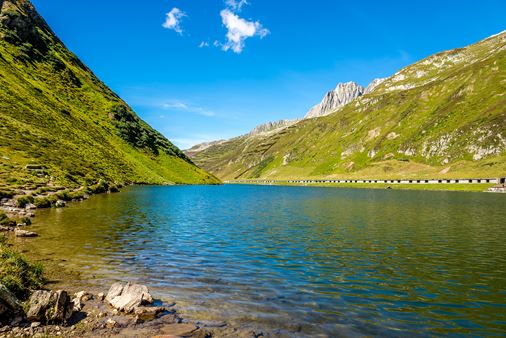 
This is a high mountain pass in the Swiss Alps. It connects the Canton of Graubünden  (East Switzerland) to the Canton of Uri (Central Switzerland) This road is closed in the winter though there is a rail option that can take cars – reservations are required. This is a great ski area (isn’t most of Switzerland?) and there are lots of lodges and cafes along this track of road. The ski area is accessible by the Oberalppass railway station which is located just below.  In addition to driving, this is also a great region for hiking and cycling. 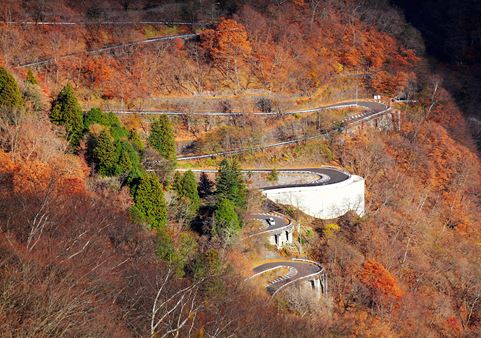 
This is likely one of the most dangerous roads in the world. This is a winding route that connects central Nikko and Oku-Nikko located in the mountains of Tochigi Prefecture, Japan. There are really two roads – you use the First Iroha-zaka to come down and the Second Iroha-zaka to go up. Each corner has a letter from the ancient Japanese alphabet, and they are placed in alphabetical order. Iroha-Zaka ascends more than 1,300 feet (396 m) and consists of 48 hairpin turns. Along this road you will experience stunning panoramic views. The road is very curvy so caution is required especially when passing on-coming traffic, over-taking and around corners. This route is frequently used by Buddhist pilgrims on their way to Lake Chuzenji, which is at the summit. 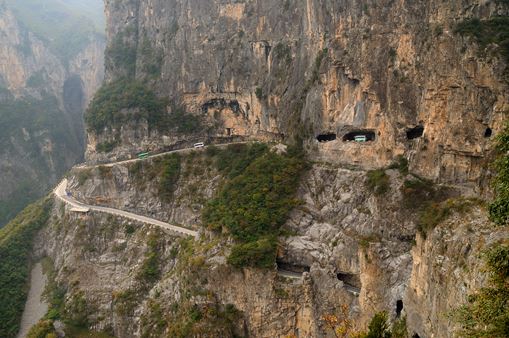 
This tunnel, often referred to as ’The Long Corridor in Cliffs’, is carved through and along the side of a mountain in the Henan Province of China. It links the village of Guoliang which sits at the top of a mountain to the outside via the Taihang Mountains. The 1.2 km of road was constructed by 13 villagers in 1972. Several died during the construction. The tunnel was opened in 1977 and has since been a tourist attraction. Prior to this tunnel being created, Guoling was secluded from the rest of China except for the ‘Heaven Ladder’, a high and steep mountain path. 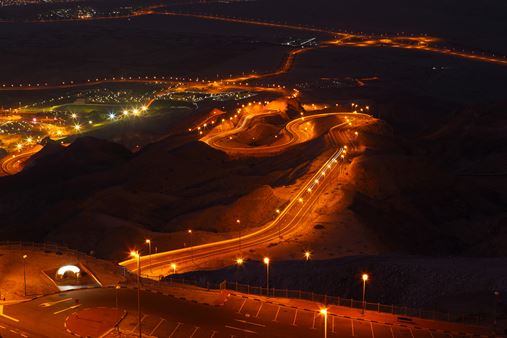 
This immaculate 11.7 km road rises 4,000 ft (1,219 m) up the Jabal Hafeet mountain. It has 60 turns and three lanes. Two lanes climb the mountain and the other descends. At the top of the mountain, the road ends at the parking lot where you will find the Mercure Grand Jabel Hafeet Al Ain Hotel and a palace belonging to the country’s rulers. This road is a training destination by serious cyclists.  The dangerous aspect of this road is sharp turns coupled with the speed at which people travel. 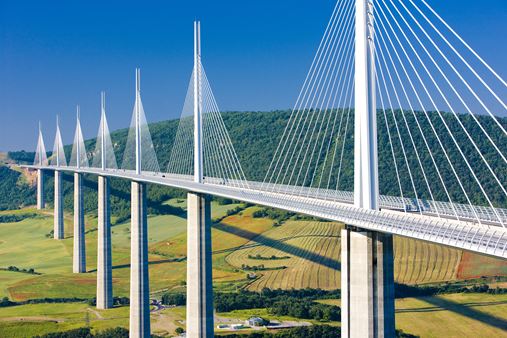 
This modern engineering achievement is the tallest bridge in the world (taller than the Eiffel Tower) with the highest mast reaching a summit at 1,125 ft (343 m) above the base of the structure. It is a cable-stayed bridge that extends across the valley of the River Tarn near Millau in southern France. The cost was 400 Million Euros and was completed in December of 2004. This structure is part of a highway that connects France to Spain and was largely built to offset the summer traffic jams. This bridge was not built without controversy, many organizations such as WWF and other environmental groups were not satisfied with the route chosen. Other critics stated the cost was just too great – tolls would never pay off the cost of the project. Since its 2004 opening, the deck height of the bridge has been surpassed by those constructed in Mexico, China and the United States.