France needed to get around in the late 1940s. Renault’s first chief executive led the way

Driving into a post-war era

Join the Conversation (0)
For Pierre Lefaucheux, the architect of the new Renault, whose vehicle helped rescue France from a post-Second World War slumber, the ending was all too ironic.

When his rather large vehicle slid off the overly small road that night just 11 days into February of 1954, the company had just popped the champagne bottles to celebrate its two millionth vehicle. It was an automotive rebirth and also a tragedy that a car crash claimed Lefaucheux’s life at age 56.

The car made the man. The man made the car. Both were equal parts of a good story.

Lefaucheux, Renault’s first chief executive after the Second World War, molded the company into a major player and helped key France’s recovery. It all went back to one very small vehicle: the 4 CV.

Like Lefaucheux, it wasn’t flashy or fast, but his decision to launch the small car gave a struggling nation something it could call its own. The 4 CV was an affordable vehicle, something everyone could park in their driveway.

According to trade magazine “Automotive News Europe,” in an article printed when Lefaucheux was officially elected to the European Automotive Hall of Fame in 2005, the 4 CV became “a symbol of the trente glorieuses, the name the French gave to the country’s 30-year economic boom that lasted until the mid-1970s oil crisis.”

One man with one car? With Lefaucheux, anything was possible.

He was a man who had no automotive experience — and a stacked deck — when he took the job as Renault’s boss. An engineer with a doctorate in law, Lefaucheux came to Renault during a tough time for the company.

In 1945, shortly after French leader Charles de Gaulle decided to nationalize Renault, 21,000 people worked for the automaker, producing about 12,000 vehicles. Half of those were cars.

Within a year, Lefaucheux had Renault on a path to making private cars again, led by the Juvaquatres, a vehicle with hydraulic brakes and shock absorbers.

But 1947 was the turning point. Lefaucheux wanted to call the 4 CV the Regine, Reginette or Regiquatre, but the workers at the factory got the final word.

Lefaucheux had other plans. He envisioned a Renault that would rule France, ahead of Citroen and Peugeot.

By the time it was shelved in 1961, Renault built 1.1 million units. It was the first French car to finish at such a notable level.

Renault shipped them around the world, from South Africa to Saigon, where they were used as taxis. The vehicle even won its class at the prestigious 24 Hours of LeMans endurance race in France. 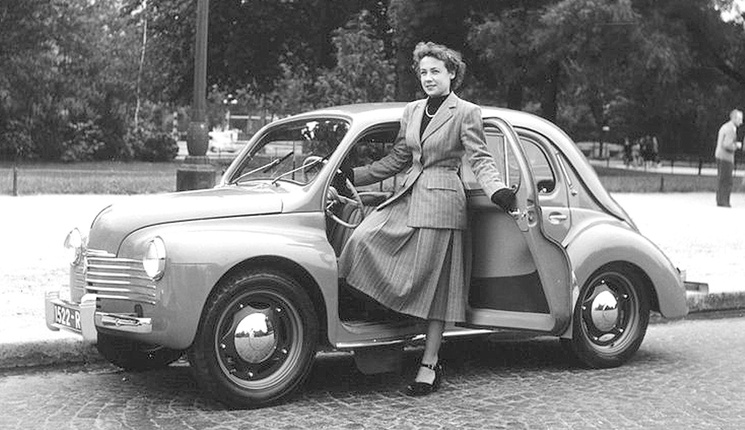 Renault branched out into other areas, building diesel tractors and the Project 109, called the Dauphine, that came with the advertising message: “If the 4 CV is the queen, then the new one has to be a crown prince or princess.”

Meanwhile, Lefaucheux built an assembly plant for the 4 CV in Spain and opened other factories in England and Belgium.

But Lefaucheux wouldn’t see the end of the 4 CV. Less than a month after Renault celebrated the amazing success of the vehicle, he was killed in a car crash while driving a Fregate, a large car that Renault had launched in 1951. His fate wouldn’t fit the man’s raison d’etre.

But the symbol lived on. The 4 CV was eventually declared an official part of the country’s heritage. Lefaucheux, the humble engineer with the law degree, the man in the pinstripe suits with the narrow stare and the broad shoulders, had the little car to thank.