Join the Conversation (0)
Tuktoyaktuk, NT – Life in Canada’s Arctic has always fascinated me. Small communities nestled at the top of the world. Many accessible only by air, effectively isolating them from the rest of the country. Supplies and fuel arrive annually by sealift during the summer months. The rest have to be flown in.

It is a part of the country that remains mysterious. The vast expanse of the tundra, a treeless, eerie landscape painted in shades of copper and ochre is mesmerizing and absolutely beautiful. Lakes permeate the surface as far as the eye can see. This undisturbed land has a way of making you feel small and insignificant.

As I stand on the shores of the Arctic Ocean and run my fingers through the icy waters of Canada’s third coast I think of what a privilege it is to be here in Tuktoyaktuk, also referred to as just “Tuk”. 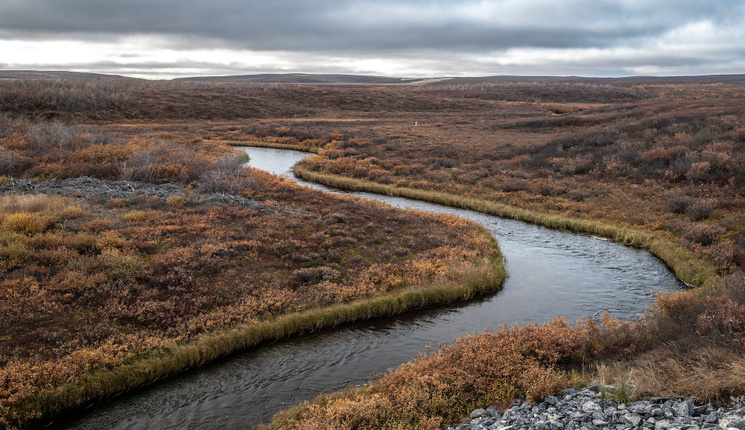 Tuk is an Inuvialuit hamlet of about 900 people and is one of the northernmost settlements in Canada. It is now the only place on the Arctic coast that is connected to the rest of country’s road network, meaning you can make the roughly 7000 km drive from Toronto—if you’re feeling adventurous.

The Inuvik-Tuktoyaktuk Highway is a 138 km unpaved gravel road that begins in the town of Inuvik, where the Dempster highway ends. It winds through the tundra all the way to its northern terminus at Tuk. Taking almost 4 years to complete the road was opened in November 2017 and is accessible by anyone with a car 365 days a year.

Chevrolet’s brand message is “Find New Roads” and it’s quite fitting and also ambitious that they chose Canada’s newest and most remote road to showcase the abilities of the 2019 Chevrolet Silverado.

They call it their best driving and most capable truck ever, and you’d have to be confident with your product if this is the place you decide to let the media test it.


Having to build a road on permafrost that partially thaws in the brief summer months was a big challenge for the engineers and road crews involved. The workforce—over 74% from the Northwest Territories—worked around the clock with over 600 days of construction falling in the winter with temps dipping as low as -60 C.

Using over 5.8 million cubic metres of granular material like gravel, silt, clay, and sand, the road was built on an elevated surface incorporating a geo-fabric layer that insulates the frozen ground beneath. The road treads as light a path through the tundra as possible mitigating any impact to the fragile, untouched environment.

The Inuvik-Tuk highway will continue to evolve and will be closely monitored through a myriad of sensors embedded within it. The shifting permafrost is a living, constantly changing environment.

This road is not for the faint of heart, and you need a tough vehicle to traverse it. Typical family cars might not fare so well, as the rough pockmarked surface is unforgiving and will happily take out a weaker suspension or bend a rim. 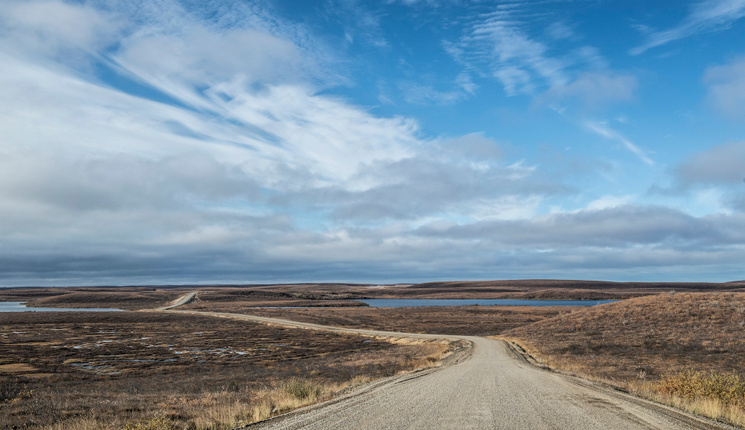 
Good thing then, we were in these new Silverados. Being Chevy’s best selling product they really went to town on this redesign, improving the truck in almost every way over its predecessor.

Truck buyers are some of the most loyal folks out there and they tend to be sensitive to big changes or new features. I’ve personally heard complaints about the styling direction, especially on the front end, but I have to tell you that I don’t know what they’re on about. The face is bold and aggressive like someone shrunk a big-rig. A good thing in my opinion.

The new Silverado now offers buyers more choice than ever before with a variety of trims and configurations that will satisfy almost any need. Like most trucks the sheer number of ways you can spec a Silverado is mind-boggling, and you’ll probably never see two that are exactly the same.

Each can be had in regular, double, or crew cab, and there are three box options: short (5’8”), standard (6’6”), and long (8’). The regular cab comes with the long and standard box, the double cab only gets the standard box and the crew cab can have either the standard or short box. 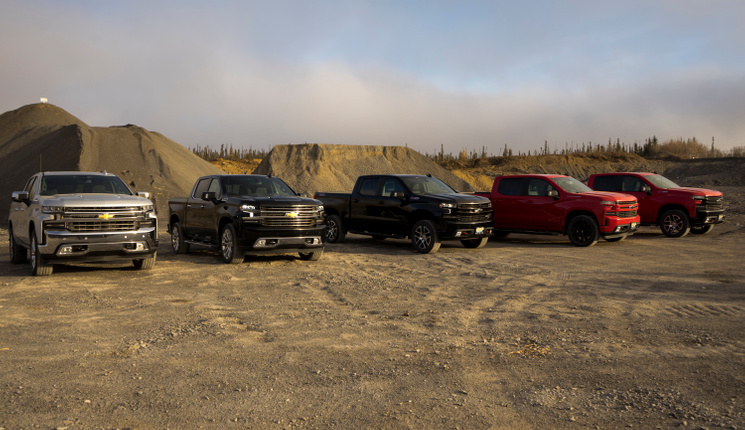 The Work Truck will dominate fleet orders while many other customers will move up to one with a bit more kit. Custom trims come with 20-inch wheels and LED taillights; Custom Trail Boss gets an off-road package that comes with a 2-inch lift and heavy-duty Rancho shocks, and off-road tires.

There’s a new RST model, “the sporty one”, that comes with an appearance package, body-coloured mouldings, and full LED lighting; LT Trail Boss, is like the Trail Boss but equipped with all the LT stuff. The LTZ adds lots of chrome, a more upscale appearance, standard leather appointments, and power-folding heated side-view mirrors.

Sitting at the top is the High Country, the Silverado for the boulevards if you will. It comes with 22” shiny wheels shod with low profile tires, and a segment-exclusive power tailgate. It can be opened and closed with a button, and if your hands are full and you need to shut the tailgate, simply nudge it up with your knee and it will automatically power itself shut.

Yeah, that’s a lot of choice and customization, but it allows you to get exactly what you need and skip the rest, ensuring you’re not paying for things you’ll never use.

To take things a step further, that 2-inch lift and the off-road goodies are available across all the trims, as a dealer installed option. 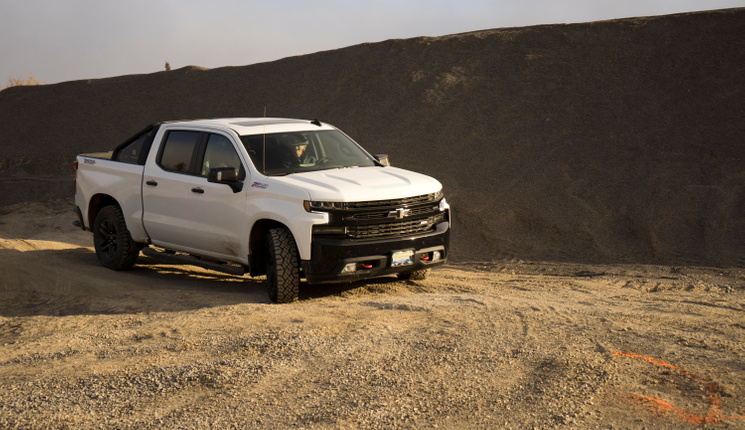 But if you need more capability, there’s always the 6.2-litre V8 with Dynamic fuel management (DFM), a new cylinder deactivation system that has 17 different firing configurations furthering the capability of the old system. DFM is also available on the updated 5.3-liter V8 that also gets the 8-speed automatic. A new 3.0-litre diesel straight six that couples to a 10-speed transmission will come later in 2019.

With all these choices, you’d think Chevy would just drop the old V6 and 5.3 litre V8 with their outdated 6-speed cog swappers and reduce the length of that build list a tad. Maybe there’s a surplus, but whatever it is, they need to go.

A new trailering app, essentially a pre-flight checklist, is standard across the board. It includes a handy trailer light test that will cycle the lights negating the need for a second person to check for you. There’s an optional hitch guidance system using the cameras, and a new trailering label standard on all 2019 Silverados that offer VIN specific weight ratings and capabilities to take all the guesswork out of safe towing limits, a simple but innovative industry first.

Through the use of aluminum (the doors and hood are now made of the stuff) and more high-strength steel, the weight of the Silverado has dropped by a significant 450 lbs.

Chevrolet also claims to offer the most volume in its beds by widening the floor a total of 7 inches. The roll formed high-strength steel used in its construction is also very durable and will take years of abuse.

The drive to the Arctic


We didn’t know what to expect from the highway, but immediately we notice that this isn’t going to be an easy cruise. The gravel loose in many places moved the LT Trail Boss around quite a bit at speeds over 80 km/h. To make things more interesting the road was anything but straight, instead following the undulating terrain, snaking through it like a river. Because the road sits on an elevated platform quite high in some cases, dropping a wheel over the edge would not yield pleasant results.

Approaching with a modicum of restraint was necessary to avoid mishaps. Still, the Silverado rode beautifully over the washboard surface. It just took the constant abuse dished out by this remote highway and didn’t skip a beat.

The Rancho shocks and optional 33-inch tires definitely played a role here. Spending some time in the High Country with the optional 22-inch wheels wrapped in low-profile tires confirmed this.

Huge potholes (if you can call them that) did jar us quite a few times but it’s to be expected on a road like this and nothing short of a Dakar racer has the suspension to fully absorb those types of bumps. 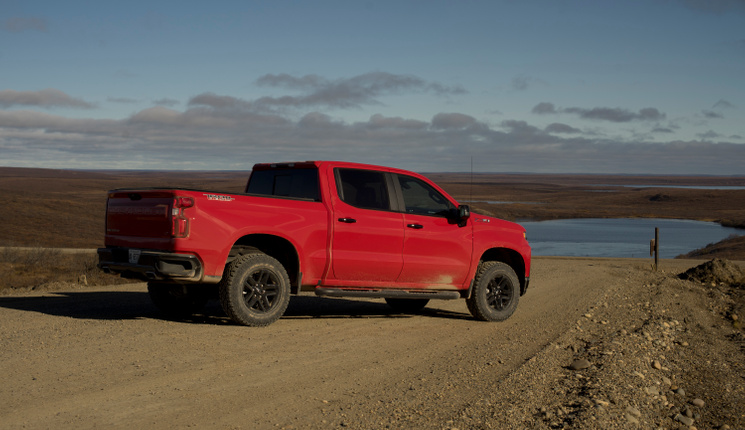 Steering effort is light and it’s accurate enough for a full-size truck. Catching little tail slides with a bit of opposite lock was more fun than it should have been and the Silverado remained easy to control the entire time.

The off-road package includes skid plates, a two-speed transfer case, and an automatic rear locker, more than enough to tackle any construction site or light off-road trail, and it was certainly enough for this most remote of roads.

The Hamlet of Tuktoyaktuk


Tuk’s tiny population welcomed us with open arms, the people just as curious about us as we were with them. Members of the community young and old treated us to some traditional drum dancing; painting a story that recalls ancient legends and stories about the Inuit way of life. Traditions slowly fading away with each new generation, and one that I feel truly lucky to have seen in person. 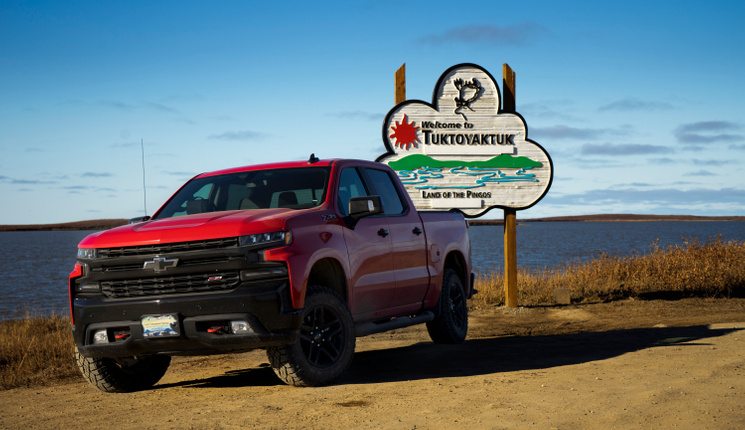 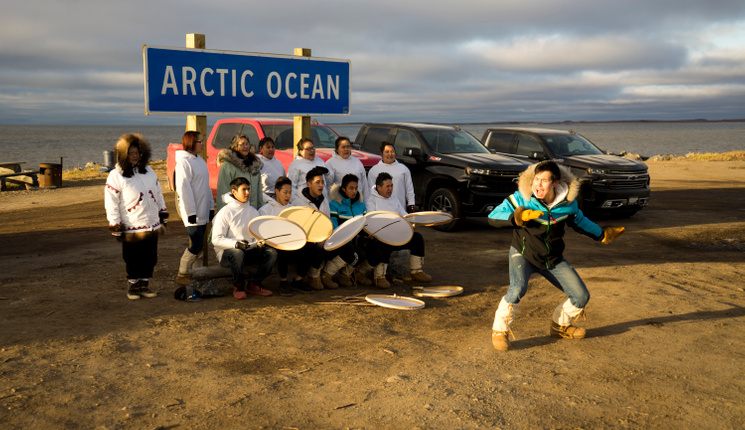 This new road has opened up a part of the country, previously inaccessible to most and will bring with it an influx of adventure seekers and tourists curious about how life works north of the tree line. They will also be treated to some of the most beautiful landscapes I have ever seen.

The full-size truck market is a war zone, but this new Silverado has an excellent battle strategy and should make it more competitive than ever. The 2019 Chevrolet Silverado goes on sale later this year.