Classics: The Chrysler C-300 was a futuristic beacon of performance

When the Chrysler C-300 premiered, it was one of the best-looking domestic cars on the road

Join the Conversation (0)
Had it not been for Virgil Exner, the Chrysler C-300 might have gone virtually unnoticed. Instead, Chrysler’s chief stylist made an example of the car to highlight the company’s contemporary product lineup.

The plan was to build a low-volume automobile that would represent the pinnacle of Chrysler styling and performance and convince the public that the automaker was ahead of the times. Given the company’s history, this attitude adjustment would be a challenge.

In 1953, after years of making frumpy, slow-selling Dodges, Plymouths, DeSotos and Chryslers, the 44-year-old Exner was tasked with creating a completely new vision. The goal was to bring Chrysler more in step with the times by replacing designs that pre-dated the Second World War. He was also given less than two years to complete this enormous project. 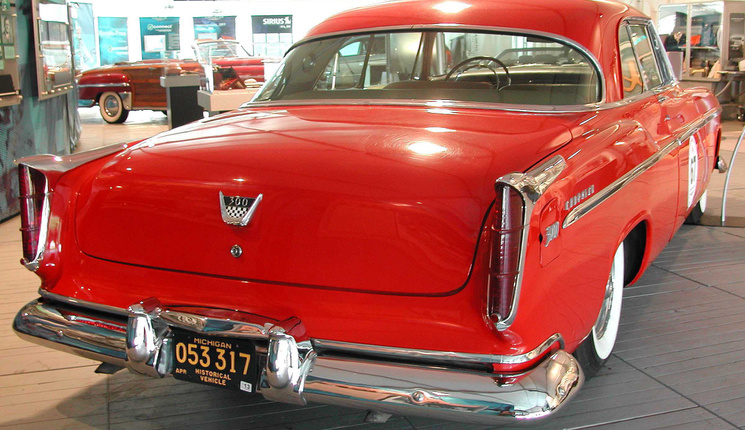 The final result was dubbed “The Forward Look” by Chrysler’s advertising agency and it was more than mere hyperbole. The 1955 models were arguably the best-looking domestic cars on the road and made Exner the toast of Detroit. They were longer, lower and wider than their predecessors and featured an assortment of dazzling multi-tone paint jobs, something buyers loved, but Exner despised.

Along with the fresh lineup came more power — in some cases a lot more power — than Chrysler had ever previously installed. Supplementing the base 1930s-era L-head six-cylinder engine were a number of new V-8s that became available for the first time on all brands. On the top rung was Chrysler’s famed 331-cubic-inch “FirePower Hemi” V-8 that originally appeared in 1951. It was re-tuned to produce a stout 250 horsepower, 70 more than the original. Expensive to produce, the Hemi remained the exclusive domain of the high-end Chrysler and DeSoto brands as well as the newly formed Imperial division.

Physically, the basis for the C-300 was the Chrysler New Yorker St. Regis two-door hardtop, an imposing car featuring a low-slung roofline and a modest pair of chrome-tipped fins. To give the car a unique look, the grille from the more expensive Imperial was substituted while a modest trim strip from the base Windsor model ran across its expansive flanks. Only three solid-tone colour choices could be picked: Tango Red, Platinum or Black.

But what really separated the C-300 from the rest of Chrysler’s herd was its exclusive Hemi engine that cranked out 300 horsepower (the origin of the car’s C-300 name), 50 more than the standard version. Torque was rated at 345 pound-feet at 3,200 revs per minute. A performance camshaft, two four-barrel carburetors and dual exhaust all contributed to its extra strength.

The Hemi (so named because of its domed hemispherical combustion chambers) was connected to a two-speed automatic transmission. A manual gearbox was not offered.

Equally important were the heavy-duty springs and shocks that converted a normally cushiony-soft Chrysler into a firm-riding road car with impressive (for the time) handling qualities. 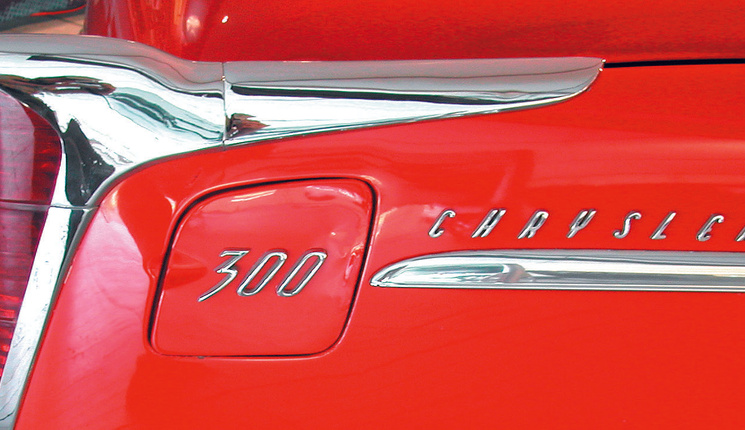 A host of extras were available including wire wheels, power steering, power windows, four-way power front seat, tinted windshield, AM radio, heater and a clock. A lack of space under the hood kept air conditioning off the option sheet and a driver’s-side outside mirror was not offered because it added wind resistance.

The arrival in showrooms of the C-300 in February of 1955 created plenty of curiosity among the public along with the fledgling fraternity of professional stock-car drivers who salivated over the car’s prodigious power.

By the end of the 1955 competition season, factory-sponsored C-300 teams had scored victories in 37 sanctioned events, including half of the 40 races in the National Association for Stock Car Auto Racing (NASCAR) series, handily beating their Ford and General Motors rivals.

Although Chrysler supposedly lost money on every one of the 1,725 C-300s made, the big coupe’s fastest-car-around cachet and on-track potency helped establish the corporation’s new-found image. By year’s end, Chrysler’s overall share of the passenger-car market had increased to a healthy 17 per cent, up from the previous year’s 11 per cent. The Chrysler division alone experienced an incredible 73-per-cent jump in sales.

The success of the C-300 as a beacon of high performance led to an unbroken succession of “letter” cars that ended with the 1965 300-L. However, recognizing the still-powerful legacy of these models, the appellation was restored as the 300M in 1999 and a V-8-powered 300C was launched for the 2004 model year. The C’s arrival marked the first Chrysler to feature a Hemi-branded V-8 since the 1958 300D, and the 300 is of course still being made.

And to think Exner’s amazing C-300 was just the beginning.