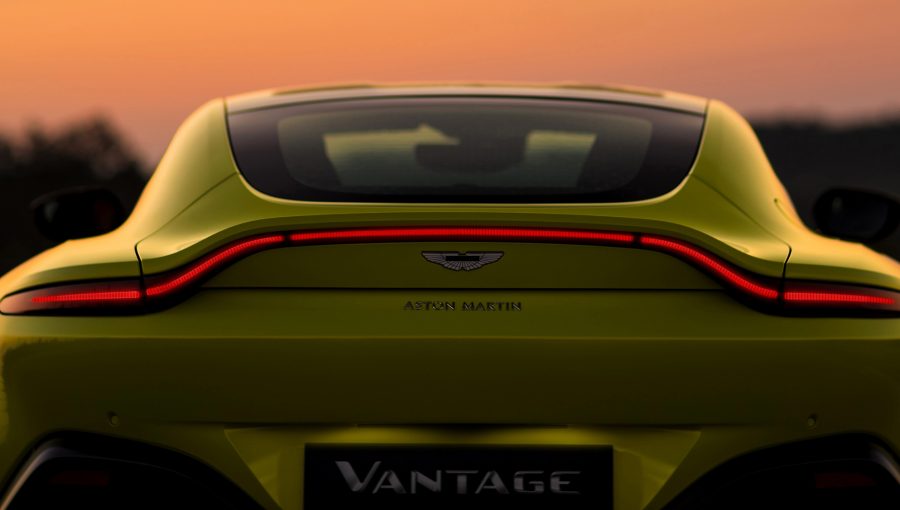 The dynamic brief for the new Aston Martin Vantage was to make it as exciting and engaging as possible without compromising its everyday usability or making it too challenging for drivers of all abilities. The key to achieving this objective was to integrate the powertrain, transmission, suspension and steering systems, which work together to offer three distinct dynamic modes: Sport, Sport Plus and Track.

The all-new next generation 2019 Aston Martin Vantage has a bold and distinctive design language with minimal front and rear overhangs creating a muscular and aggressive stance. New head and tail lights form dramatic new signatures giving the Vantage unmistakable road presence and contribute to a strong and individual identity within the growing Aston Martin model range. 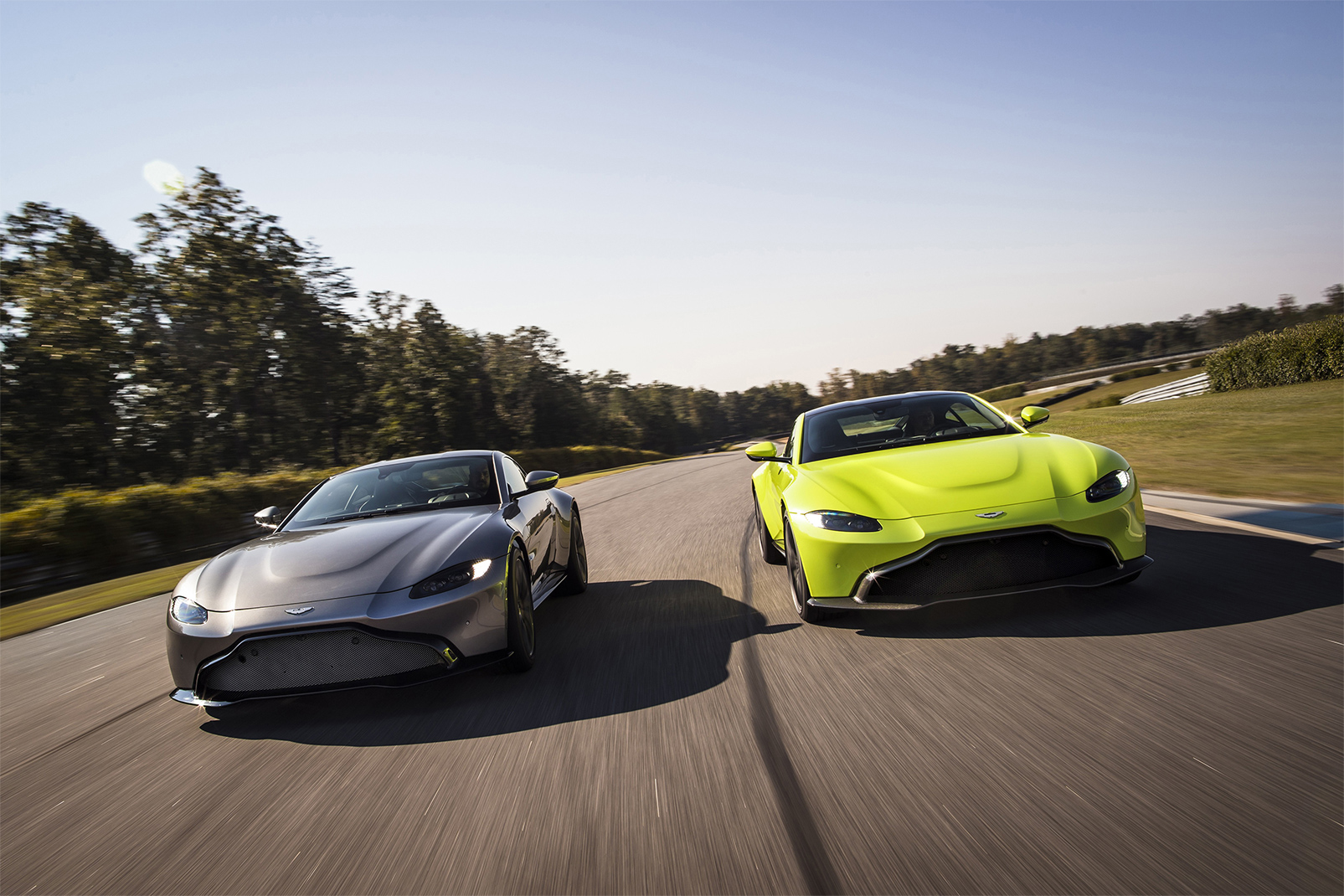 The heart of the Vantage is Aston Martin’s potent new alloy, 4-litre twin-turbo V8 engine which is set low and as far back in the chassis as possible for optimal centre-of-gravity and perfect 50:50 weight distribution. The high performance and efficient engine develops 503 hp at 6,000 rpm and 505 lb-ft of torque from 2,000-5,000 rpm. With a dry weight of 1,530 kg (3,373 lbs) this gives the Vantage formidable power-to-weight and torque-to-weight ratios aiding in the cars impressive performance capabilities. Aston Martin has tuned the induction, exhaust and engine management systems to give the Vantage an equally aggressive soundtrack.

The Vantage is driven by its rear wheels via a rear-mounted ZF eight-speed automatic transmission and can achieve acceleration runs from 0 to 60 mph (96.5 km/h) in just 3.5 seconds. The Vantage will continue on to a top speed to 313 km/h (195 mph). 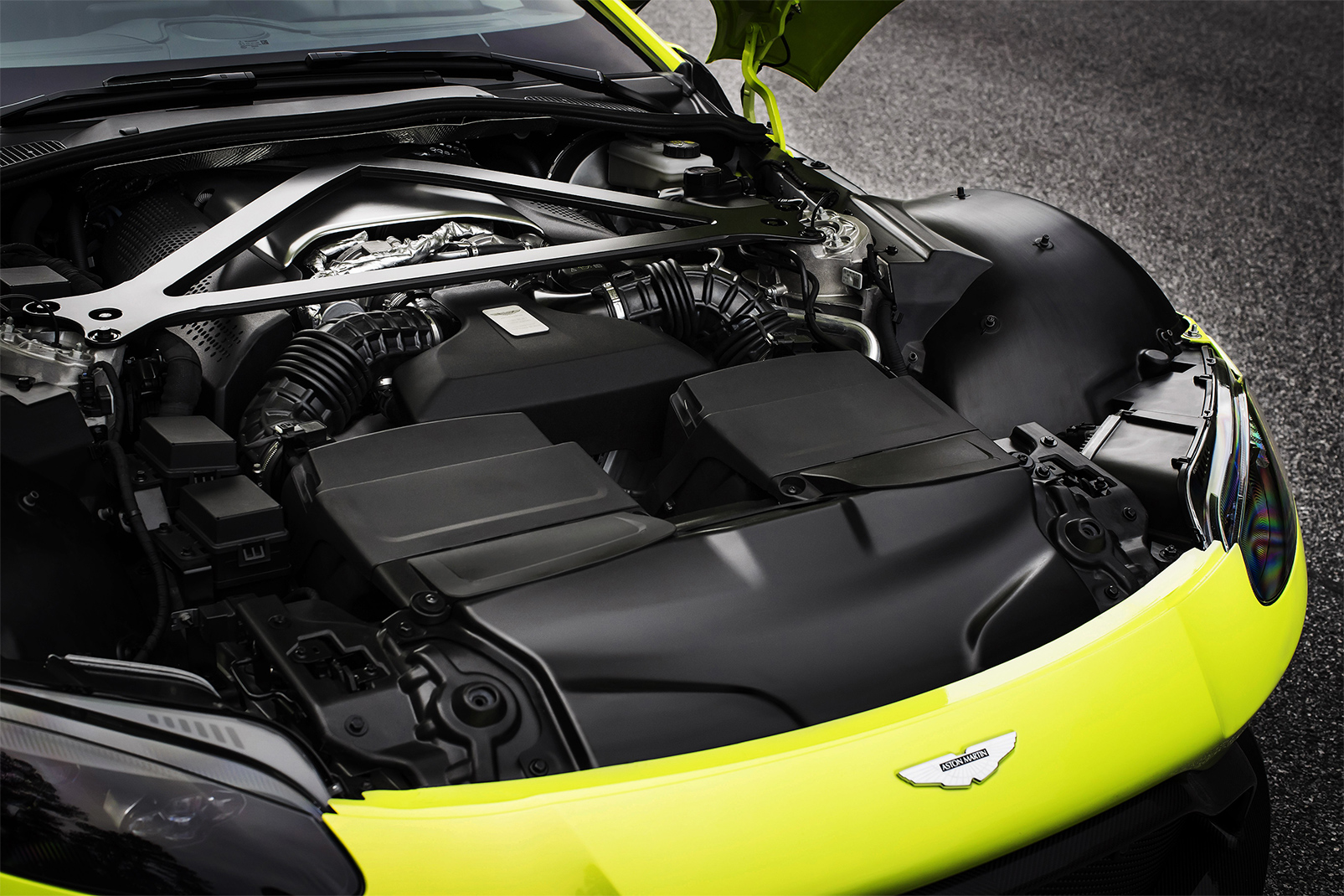 “It speaks volumes for the outgoing Vantage that it is the single most successful model in Aston Martin’s history,” said Dr. Andy Palmer, Aston Martin Chief Executive Officer. “Creating a worthy successor has been a challenge to relish and a huge source of motivation. I’m enormously excited by what we’ve created: a new Vantage that’s more explicit in looks and intent, wrapping heart-pounding performance and dazzling dynamics into an everyday usable package. A true sports car with a sharper look and a keener dynamic edge, the new Vantage is the Aston Martin pure driving machine enthusiasts have been waiting for.”

The new Vantage comes with 20” wheels and Pirelli P Zero 255/40/20 tires up front and 295/35/20s in the rear, all specifically tuned to suit the driving dynamics of the Vantage in wet and dry conditions.

Chief Creative Officer Marek Reichman touted the new car’s design as “the most powerful and provocative …ever seen in a Vantage.” Reichman likened the car to “a hunter,” and explained how the duality of usability and athleticism combine aesthetically as they do functionally: “It is based on a single line under tension, inspired by the DB10 and the extreme track-only Aston Martin Vulcan, blending the two unique design languages together into a form that is sculpted, dynamic, pure and elemental.” 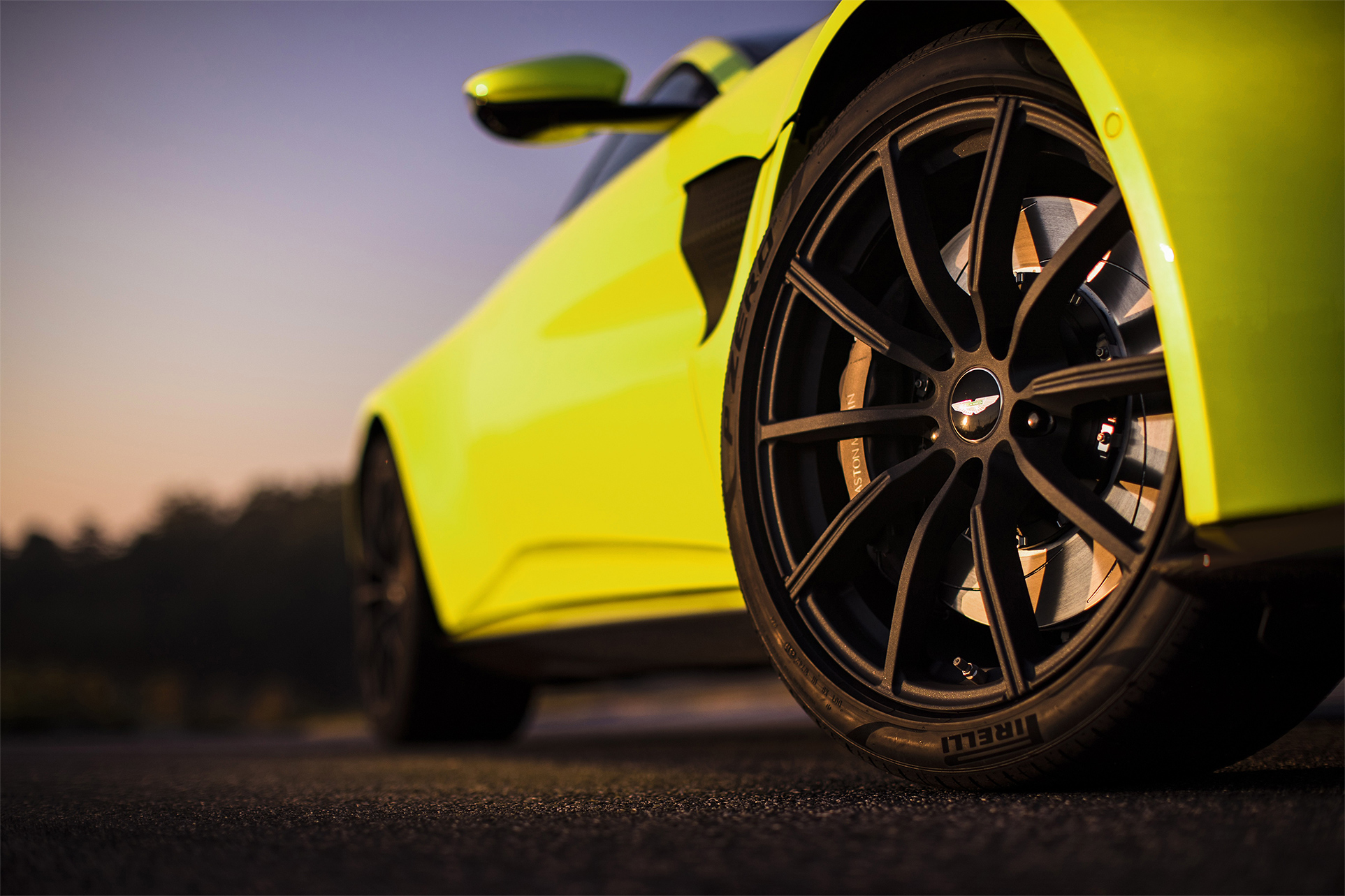 An array of integrated electronic systems provide drivers with maximum control, including Dynamic Stability Control and Dynamic Torque Vectoring. The speed-dependent electric power steering has 2.4 turns lock-to-lock for a combination of responsiveness and precise steering control.

“As an automotive engineer, the challenge is always the same: to achieve greater efficiency in every area of the car,” said Max Szwaj, Chief Technical Officer. “With an unashamed sports car such as an all-new Aston Martin Vantage you have another challenge – the relentless pursuit of greater emotion and excitement. Not only have we massively improved the hardware of this new Vantage, we’ve invested it with true heart and soul.” 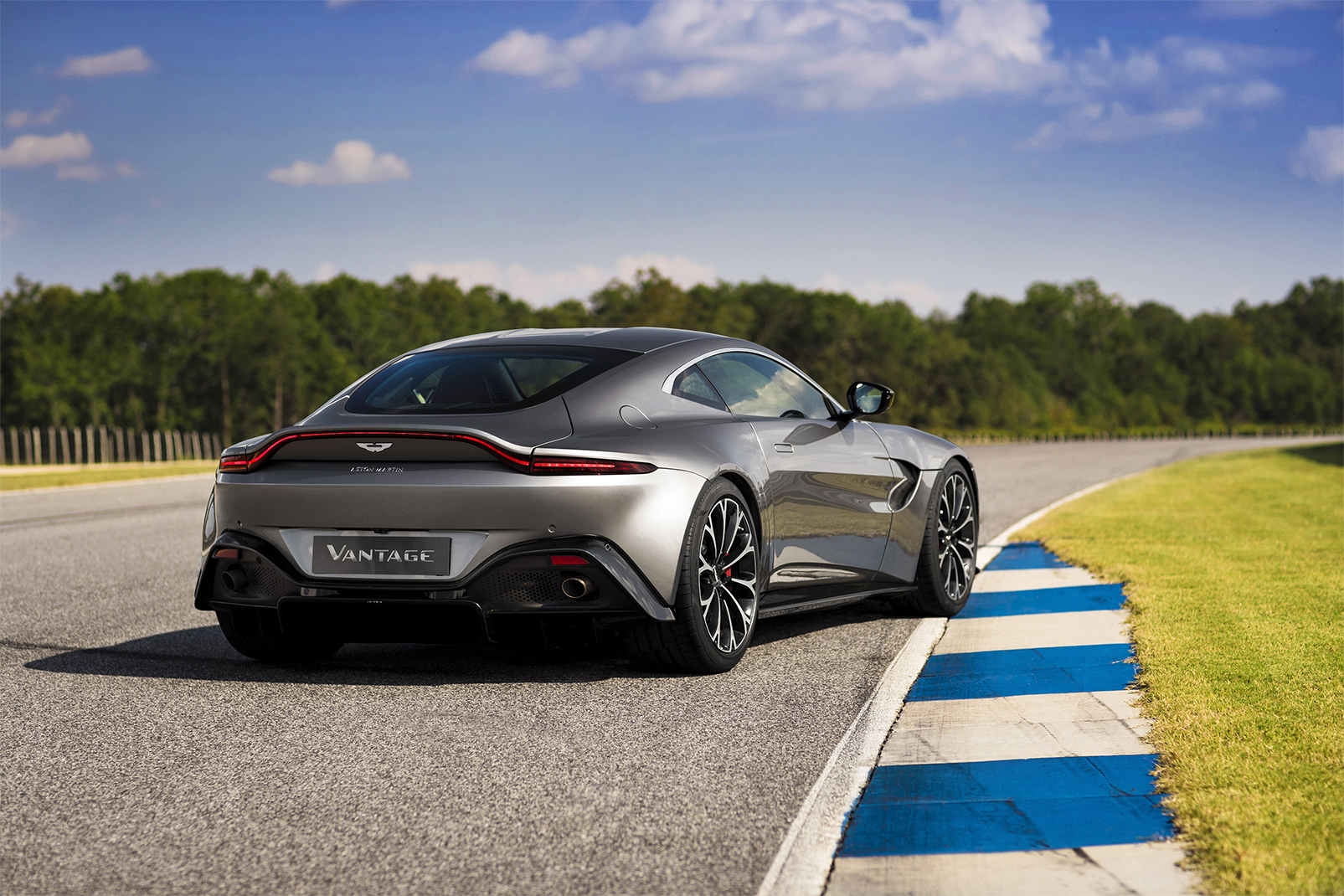 At 4,465 mm, the new Vantage is 284 mm shorter than the Aston Martin DB11 and is 34 mm shorter than a Porsche 911. This compactness helps give the car its inherent agility, something for which the outgoing Vantage was renowned and on which this new model raises the bar.

“With Vantage we’ve really ramped-up the feeling of agility, response and excitement,” said Matt Becker, Chief of Vehicle Attribute Engineering. “Key to this is the new Electronic Differential, which works with Dynamic Torque Vectoring and the car’s Dynamic Stability Control to make the car feel more responsive in slow and medium corners, but more stable in high-speed turns. We’ve put a huge amount of effort into the calibration of these electronic systems so the car feels natural and connected. It’s incredibly quick across the ground, but the speed doesn’t come at the expense of feel and enjoyment. It’s a proper driver’s car.” 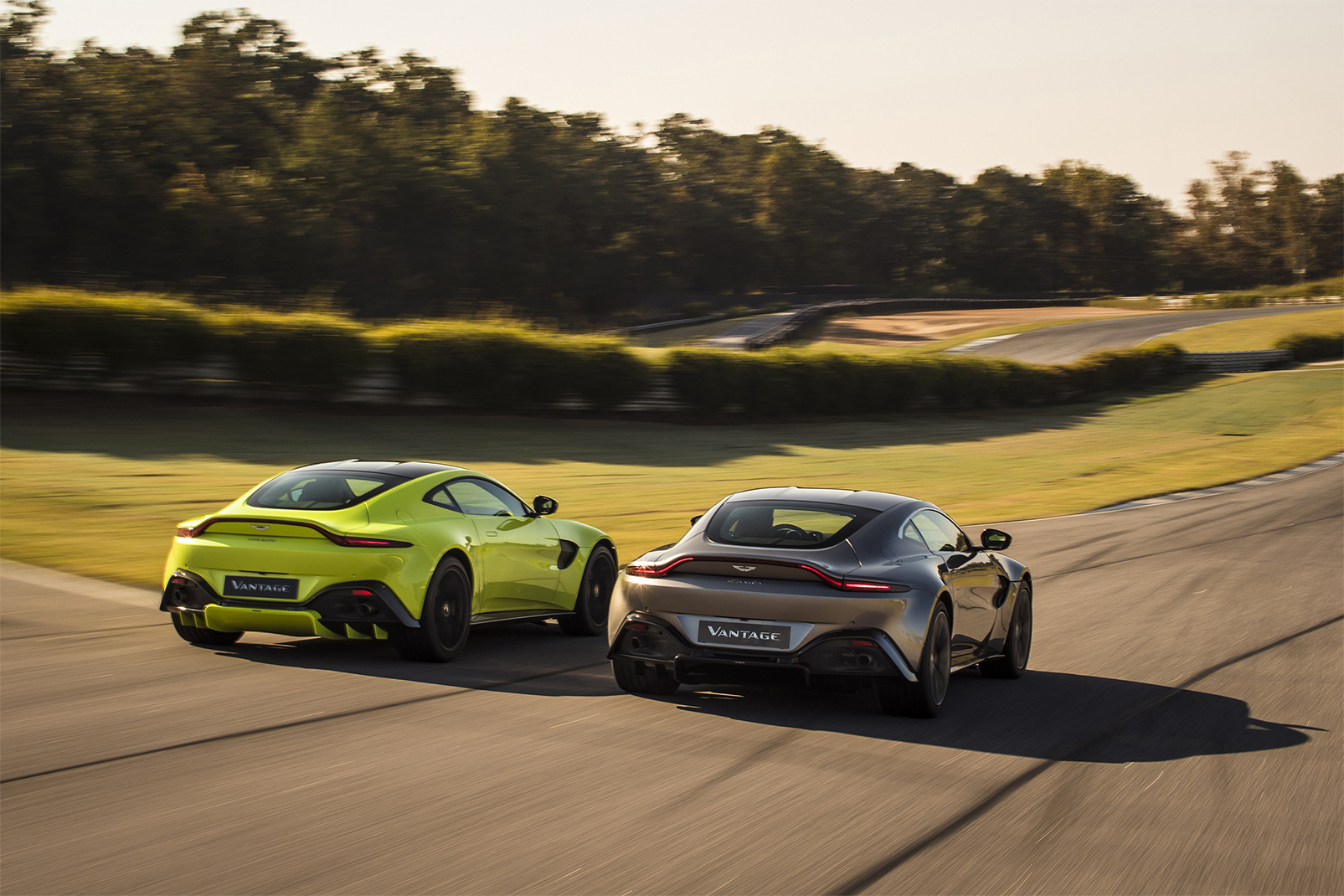 The braking system features ventilated two-piece 400 mm cast-iron discs at the front, with ventilated 360 mm discs at the rear, with 6-piston front and 4-piston rear calipers. The master cylinder and booster have been updated to ensure the Vantage feels and responds as a true sports car, creating a more responsive and confidence-inspiring drive.

Aerodynamic performance was central to the Vantage design concept: the front splitter directs airflow underneath the car, where a system of fences channels cooling air where needed and also ensures the rear diffuser receives clean airflow. The design of the diffuser creates an area of low pressure air while also preventing turbulence generated by the rear wheels from disrupting the flow of air exiting centrally from beneath the rear of the car. New side gills integrated into the body surface bleed air pressure from the front wheel arches, and, with the pronounced upswept rear deck lid, the Vantage generates a significant level of downforce – a rarity on any production car and a first for a core production Aston Martin model.

Aston Martin decided on fixed paddle shifters designed to so that drivers can shift without having to reposition their hands. Further, Aston Martin even specifically honed shift feel – yes, the feeling of each shift – to generate optimal satisfaction.

For the first time on an Aston Martin, the new Vantage features an Electronic Rear Differential (“E-Diff”). This differential is linked to the car’s electronic stability control system so it can understand the car’s behaviour and react accordingly to direct the engine’s power to the relevant wheel. Unlike a conventional Limited Slip Differential (“LSD”), the E-Diff can go from fully open to 100% locked in a matter of milliseconds. At higher speeds, the E-Diff’s speed and sensitivity of response enables the system to take very fine control of the car’s dynamic behaviour. It makes the car feel much more composed both in terms of its straight-line stability and its cornering performance, providing the driver with increased levels of confidence to explore and enjoy the car’s capabilities to the fullest. 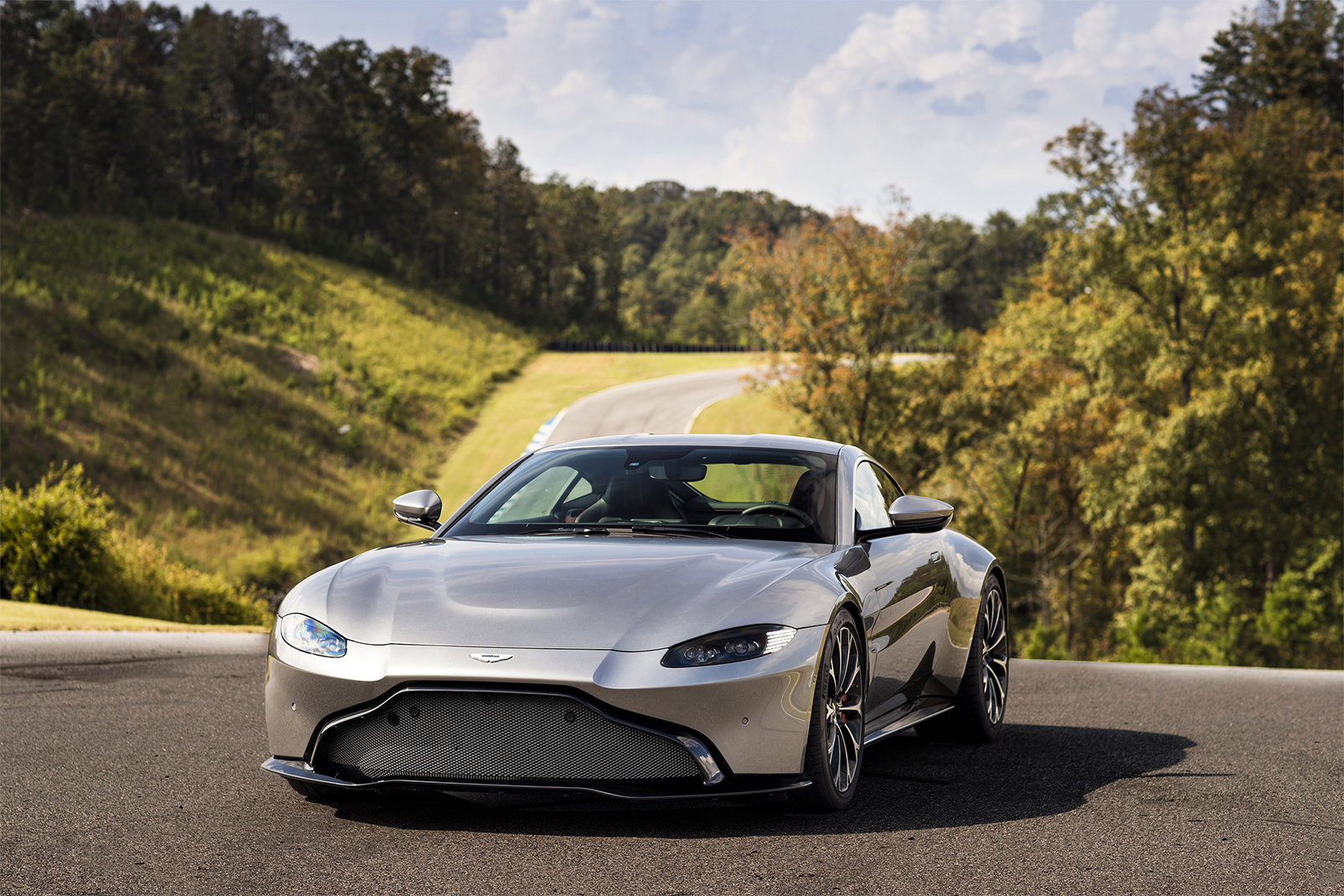 Thanks to full integration of engine, transmission, E-Diff, Dynamic Torque Vectoring, Dynamic Stability Control, Adaptive Damping and the electric power steering systems, each driving mode optimises every area of the car as one. With each step the Vantage gains in agility and responsiveness, its character becomes progressively sharper, more vocal and more exciting. This is the essence of the Vantage driving experience – a car that’s connected and engaging with the breadth of capability to revel in challenging roads and bare its teeth on track. 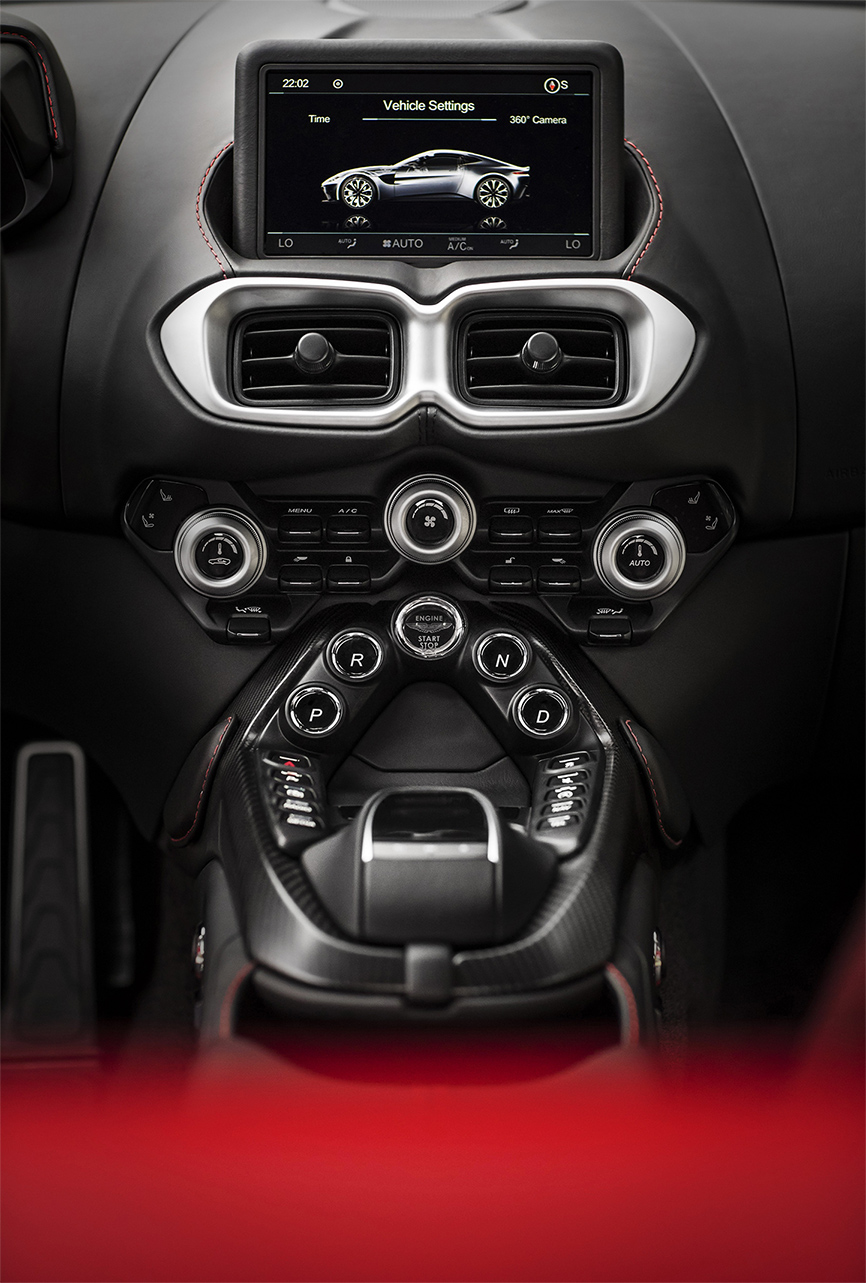 The new Vantage is on sale now with an MSRP starting price of £120,900 in the UK and USD$149,995 in the United States. Deliveries are scheduled to begin during the second quarter of 2018. Canadian pricing will be released soon. 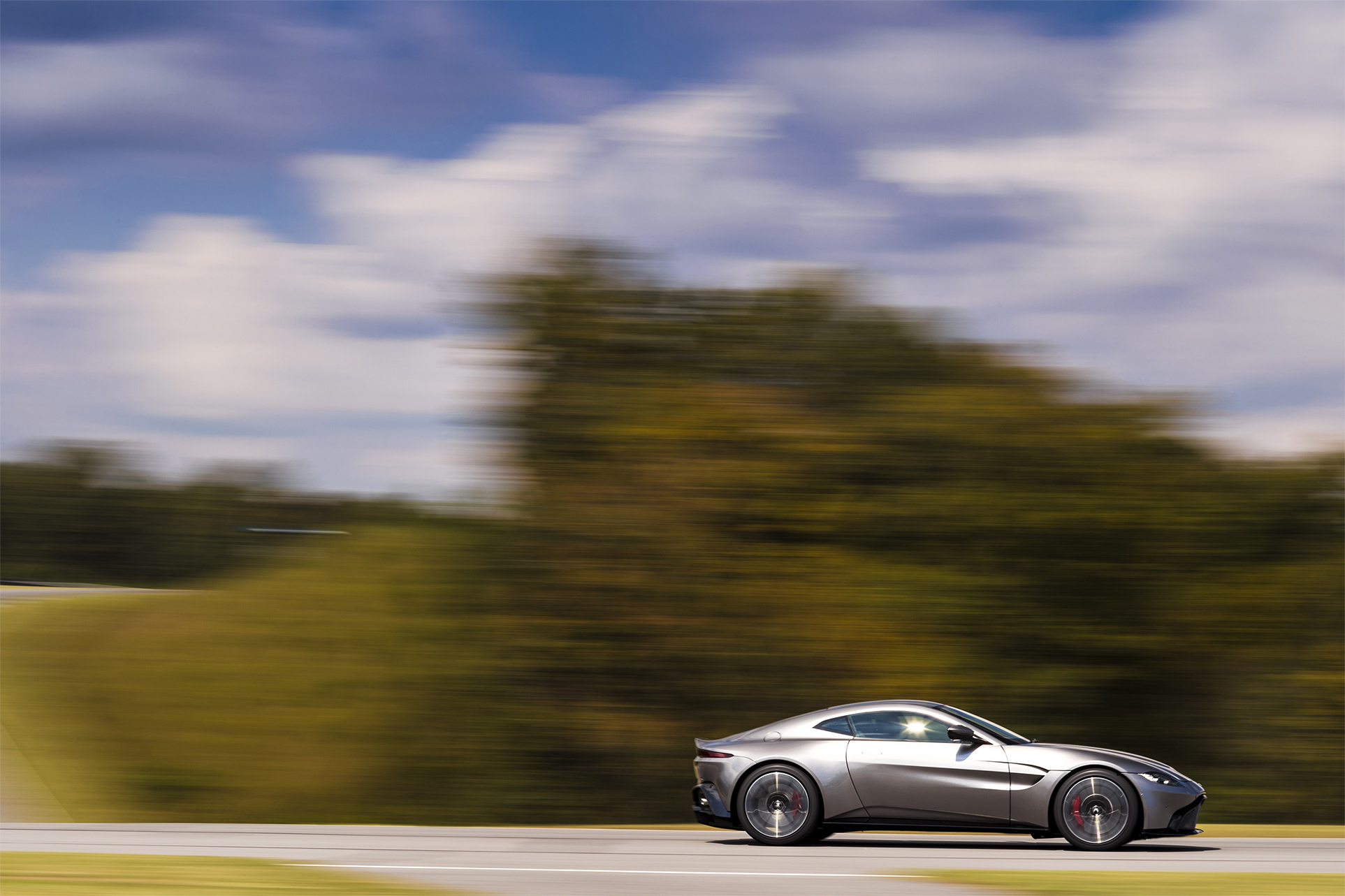 For seven decades the heartbeat of Aston Martin’s purest models, the Vantage nameplate has been worn by some true icons. First used in 1951 on a high-output engine option for the DB2, Vantage was quickly established as a model in its own right. Highlights include the William Towns-designed V8 Vantage, spectacular twin-supercharged V600 Le Mans and the much-loved V8 Vantage. Today this formidable sporting dynasty is poised to hit new heights with the introduction of the new Vantage.

When the name “Vantage” was first introduced, few could have imagined its future significance. Originally used in 1951 in sales literature for a high-performance derivative of the DB2, the Vantage engine – offering 125bhp against 105 for the standard model – was far from a standalone model, but established the name as one that would appeal to the keenest drivers.

The company next used the name to denote a distinct model in 1962 with the DB4 Vantage. In addition to a high-performance engine, these Vantage specification cars also featured subtle styling modifications. With the introduction of the DB5 in 1964, the Vantage model became firmly established as the high-performance derivative. The DB5s were visually distinguished by discreet Vantage badges attached to the side strakes on the front wings – a strategy that also applied to the DB6, DB6 Mk2 and DBS.

The first standalone Vantage model was the short-lived AM Vantage – in essence a re-styled DBS Vantage with a 4.0-litre 6-cylinder engine. Produced for a little over a year between the spring of 1972 and 1973, it was sold alongside the new William Towns-designed AM V8. Though only 70 examples were built, the AM Vantage spawned a true icon in the shape of the V8 Vantage. Introduced in 1977 as Aston Martin’s performance flagship, the Vantage was defined by its muscular looks and immense performance courtesy of a tuned 375bhp version of the 5.3-litre V8. One of the fastest and most desirable cars of its day, the V8 Vantage would ultimately spawn Volante and Zagato versions before it ceased production.

By now firmly established as the quintessential British supercar, the next Vantage was a magnificently brutal evolution of the V8-engined Virage Coupe. With uprated brakes and suspension and a pair of superchargers attached to the hand-built V8, this new Vantage was a 550bhp monster. Later developments saw power rise to 600bhp, with the final V600 Le Mans models amongst the rarest and most desirable Vantage models of all and the last Vantage model to be built at Newport Pagnell.

The DB7 Vantage of 2000 was a landmark car, as it introduced Aston Martin’s new 6.0-litre V12. A huge step up from the six-cylinder DB7, the Vantage was a true Ferrari rival. Available with manual or automatic transmission, and in Coupe or Volante body styles.

With the introduction of the all-new 2005 V8 Vantage, Aston Martin was to experience unprecedented levels of kudos and sales success. Built around the company’s innovative VH platform and upon a strong, lightweight bonded aluminium chassis, this generation of Vantage continually evolved. First, with a large capacity V8 engine, then with the introduction of an Automated Sequential Manual transmission. When Aston Martin launched a V12 Vantage in 2009 it wowed enthusiasts around the world. Since then, special series models such as the track-biased Aston Martin GT12 and GT8 models have continued to exploit a design with apparently limitless potential.

Now, with the introduction of the new Vantage, a fresh chapter is about to begin. 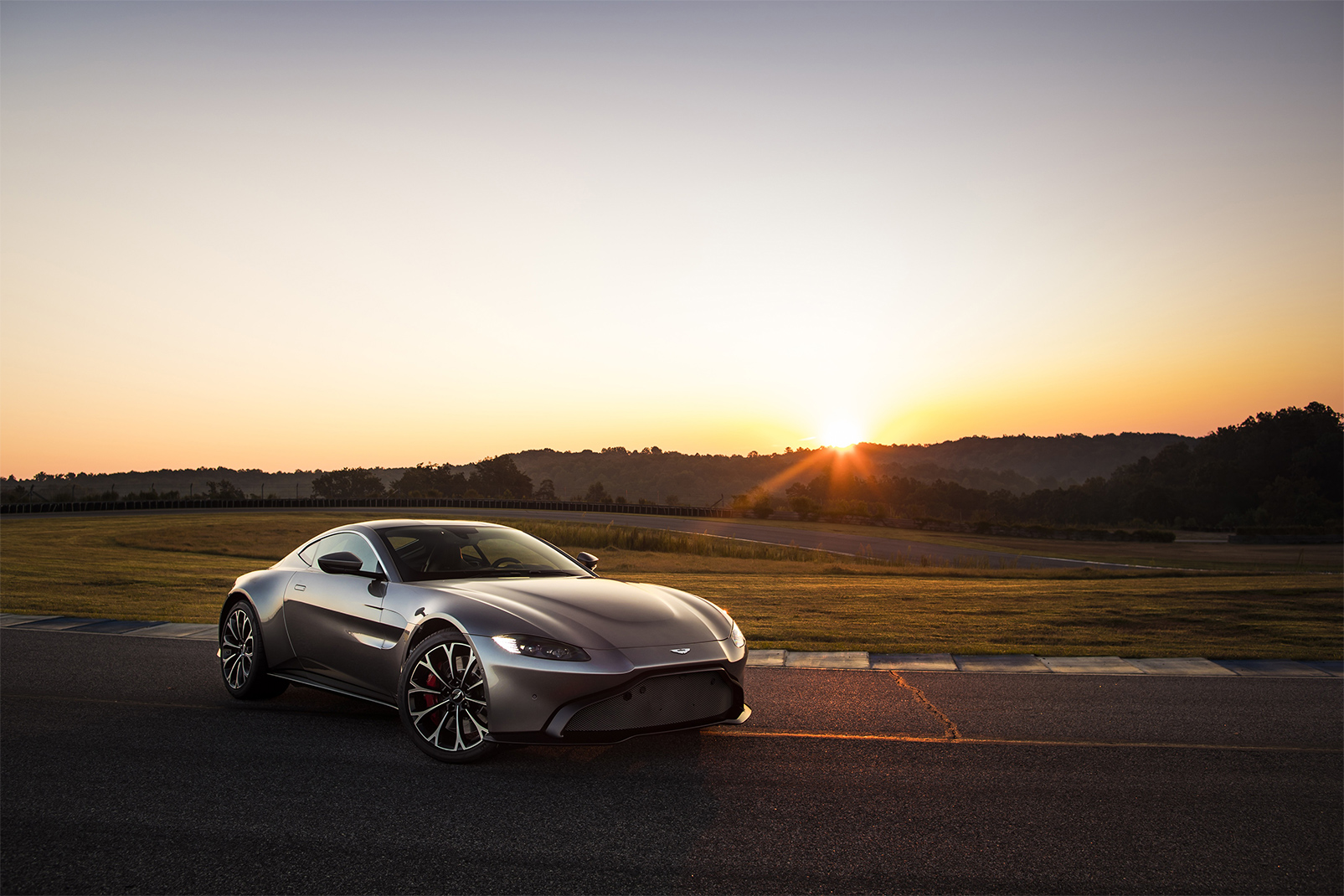 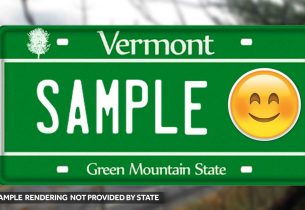 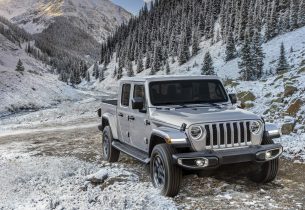 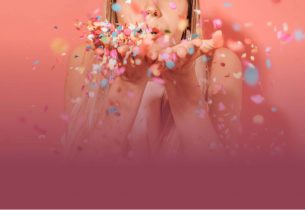 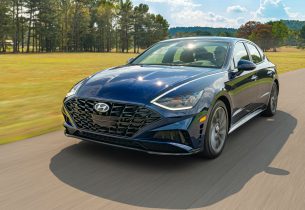