What is it about the James Bond character that has captivated audiences for over 50 years? Is it the cinematography? The fantastic script writing? Is it the impressive casting of handsome Hollywood men? Or is it the luxuries? Let’s face it: Bond doesn’t do anything that’s average.  007’s lovers, his lifestyle, and especially his cars are always top notch. Today, we’ll just focus on the cars.  Here are the Top 10 James Bond Cars in chronological order of appearances:

The car James drove in the first Bond movie was a Sunbeam Alpine Series II 1962. Not his most extravagant, but definitely worth a mention. The 1935 Bentley Mark IV appeared in the second James Bond movie ever made, From Russia With Love(1963). The Mark IV makes this list because when it was featured in this 1963 film, it was already 30 years old.  At the time, it was considered a classic. It was important for the producers to include a Bentley in the film because in many of the Ian Fleming novels, Bond drives a Bentley 4.5 litre. In From Russia With Love, James is seen picnicking with Sylvia Trench alongside the Bentley.  He pulls the convertible top up from the car and he and Sylvia have some Bond-style alone time.

Specs: 2 door coupe body style with a front mounted engine delivering power to the rear wheels.
4 litre engine is a naturally aspirated, double overhead camshaft, 6 cylinder that has an output of 282 bhp, top speed: 240 km/h, A 5 speed manual transmission delivers the power to the driven wheels.

VIDEO: Spectre: Aston Martin and Jaguar race through Rome in the next James Bond film

The 1963 DB5 was the first Aston Martin to make an appearance in a James Bond film.  It first appeared in Goldfinger(1964) and then in the Bond movie that followed immediately after it; Thunderball(1965). Since its James Bond Film debut, the ‘63 Aston Martin has become one of the most infamous movie cars.  It is often referred to as, “James Bond’s car.” Some even argue that James Bond films were what really put Aston Martin on the map. This classic was featured in some of the more recent Bond films as well; Goldeneye(1995), Tomorrow Never Dies(1997), Casino Royale(2006) and Skyfall(2012). Aston Martin and James Bond became an on screen iconic relationship.

In the 1971 film, Diamonds are Forever, producers had 007 in one of the most action-packed car chases of his time.  Bond finds himself surrounded by cop cars as he is getting chased by police on the Las Vegas Strip.  Seriously, what else would you drive during a police chase on the Las Vegas strip?  A muscle car was the perfect choice.  A Ford Mustang was an even better decision.  In 1971, Ford wanted the Mustang Mach 1 to be the car that James Bond was driving.  They saw the rise in sales from other car companies after their appearances in James Bond Films and they wanted a piece of the action.  They wanted it so bad that when a Mustang was destroyed while shooting the scene, Ford happily kept sending brand new ones to set.   However, technically the car was not Bond’s in the movie, it was Tiffany Case’s.  James just borrowed it.

Not only did the 1977 James Bond film, The Spy Who Loved Me, gross more than 184 million dollars… it also gave us one of the coolest Bond cars of all time.  The 1976 Lotus Esprit S1 looked way ahead of its time when it came out. The producers wanted to create a chase scene that was innovative and the Esprit S1 was the car for the job.  In The Spy Who Loved Me, 007 uses his Lotus to travel in the air, on the ground or underwater.  Hard to believe, isn’t it? Actually, the submarine version of the Lotus Esprit S1 was real. Producers had a fully functional, real submarine built from the Lotus body shell made just for this film.

In 1985, the James Bond franchise released, A View to Kill. This was Roger Moore’s final 007 film.  There was speculation that it was Roger’s last film because he began to significantly show his age.  One thing I know for sure is that he went out in style.  In A View to Kill, James Bond drives a 1962 Rolls Royce Silver Cloud II.  It’s classy and distinguished; perfect for a seasoned spy.  The Silver Cloud II in this film was actually owned by the producer of the James Bond franchise, Cubby Broccoli.  He purchased it for himself after the success of the first 007 movie called Dr. No. It also had a brief cameo in the 1965 Bond film, Thunderball. For action scenes in A View to Kill, producers used a 1958 Bentley S1 as a stunt-double.

I am not sure why producers did not want to debut the 1985 V8 Vantage Volante the same year A View to Kill(1985) came out, but it makes its appearance in The Living Daylights(1987). Realistically, it’s never too late to throw an Aston Martin in your movie.  James Bond also got a new face in this movie as Timothy Dalton was cast to play the iconic character. Aston Martin came back in this film after an 18 year hiatus. The look of this car is almost exactly the same as the Aston Martin DBS that appeared in Her Majesty’s Secret Service(1969). This could explain why the 1968 DBS was eventually discontinued by the brand.  It could also explain the long break the franchise took from Aston Martin.  The body style of Astons barely changed for quite some time.  This would have been too repetitious for Bond movies.

Enter Pierce Brosnan.  After Timothy Dalton’s rendition of James Bond failed to catch on with audiences, the franchise took a production break for about 5 years.  They rebooted the franchise with a fresh new look and a dapper new Bond.  That also brought on a vehicle makeover!  BMW decided to be the automotive sponsor for the 007 reboot and it turned out to be a success.  In The World is not Enough(1999), James Bond rode in a BMW Z8.  The appearance of this roadster screams Bond. It’s sleek, classic, and of course was equipped with surface-to-air missile launchers.  BMW’s decision to put James Bond in their car was a good choice because every movie they were featured in caused a huge spike in their sales.  As for 007’s ’99 BMW Z8, a helicopter with a metal cutting gadget painfully cuts it in half.  Z8 lovers everywhere shed a tear.

For some unexplainable reason, Bond always has the picture-pervect style everywhere he goes… and a car to match.  In Die Another Day(2002),  007 ends up in Havana, Cuba.  Although the Ford Fairlane is not nearly the fastest Bond car and is not equipped with gadgets, you have to admit it was perfect for the scene.  The two-door 50’s style convertible is exactly what one should drive in Havana.  Although the ’57 Fairlane makes a brief appearance in the movie, it needs to be mentioned.  Bond’s whole life is picturesque. Although he drove it briefly and used it solely for transportation, the Ford Fairlane helped create a memorable Bond moment.

As the world received its new James Bond in Casino Royale(2006), producers decided to stick with Aston Martin as the official Bond car.  This makes perfect sense; a lot of people associate Aston Martin with Bond.  Daniel Craig became the face of the franchise and gave Bond a whole new look.  The movies lost a lot of their gimmicky qualities while still maintaining their 007 demeanor.  The DBS V12 was also briefly at the beginning of Quantum of Solace(2008). This car was named “DBS” after the 1968 Aston Martin DBS seen in Her Majesty’s Secret Service(1969).  Not a lot of people know that the DBS actually made a brief appearance in Diamonds are Forever(1971); it was being fitted for missiles in Q’s lab.  The 2006 Aston Martin DBS V12 that 007 drove was a slightly deeper silver.  The colour of this car is officially called “Casino Royale.”

In November 2015, Daniel Craig will star in the 24th James Bond film.  Spectre(2015) will be his fourth performance as the spy.  In the Bond movie before this, Skyfall(2012), James was seen driving the classic  Aston Martin DB5… seriously, you can’t go wrong with that car. Since Skyfall(2012), Bond has not been on our movie screens in 3 years.  This offers Aston Martin the perfect opportunity to have 007 drive the gorgeous new 2015 DB10.  It has a whole new sleek body.  You almost might not even recognize it.  It is still a 2 door coupe, but with an entirely different feel.  The DB10 was unveiled in December 2014 as the official James Bond car. This year marks the 50 year partnership between Aston Martin and the James Bond Franchise.  This is James Bond’s 6th Aston Martin. 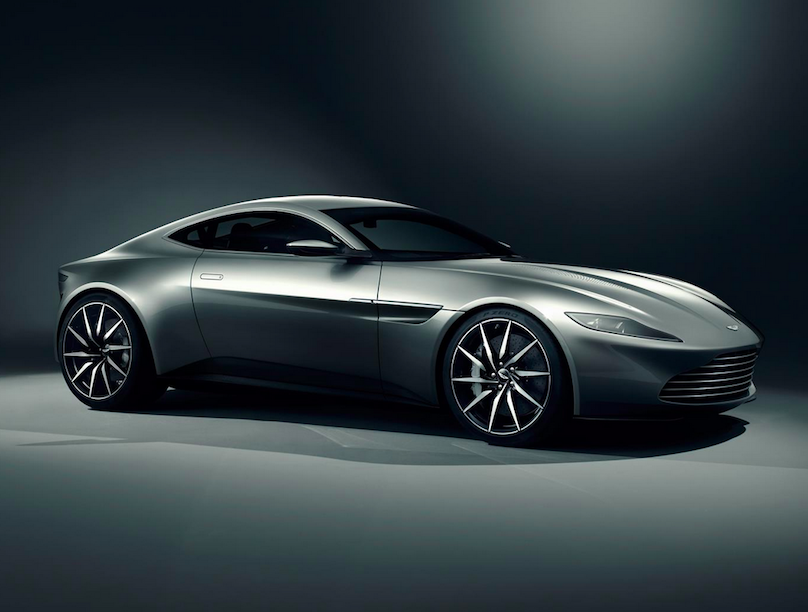 We have known James Bond since 1962, and one thing we can say with confidence is that this character does everything with panache… especially driving.  If you are a car lover, plan a day of watching a 007 marathon.  You won’t be disappointed.  Even the villains in James Bond movies drive in style.

Some other memorable cars that did not make our list are: