FINALLY, after what seems like eons, we Canadians get to experience one of the joys of compact motoring, and that’s a Ford compact with “RS” badges attached to its tailgate.

FINALLY, after what seems like eons, we Canadians get to experience one of the joys of compact motoring, and that’s a Ford compact with “RS” badges attached to its tailgate. And seats. And big rear wing. And steering wheel—they’re everywhere, actually, presumably because Ford is worried that too many will still write this off as just another version of their mass-market hatch. Which it isn’t. Far from it, in fact. 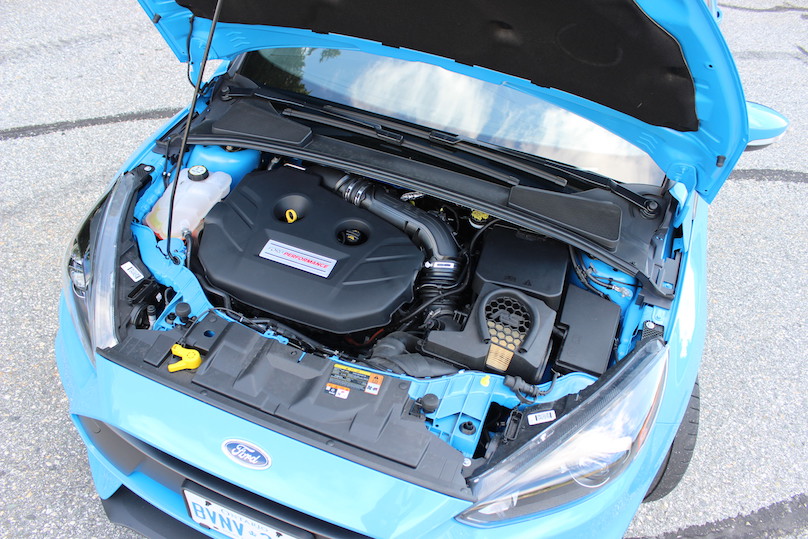 Thanks to some tech borrowed from the Ford Mustang (it shares that car’s 2.3L EcoBoost turbo four-cylinder), the RS now makes 350 hp and 350 lb-ft of torque, enough for a claimed 0-100 km/h sprint of 4.7 seconds. It’s also good for one of the most addictive sounds as you blast down your favorite b-road, dual exhausts hollering on acceleration and spitting backfire on lift-off. Engrossing. 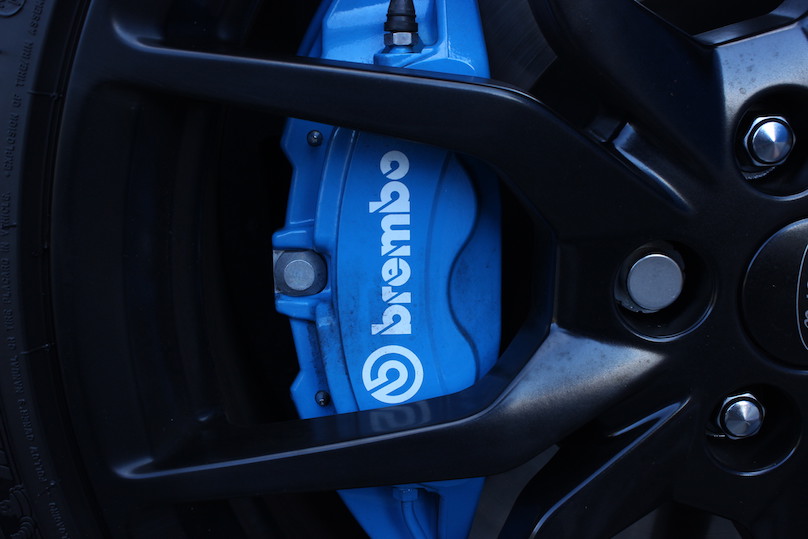 Big blue Brembos at the front leave little to the imagination. The four-piston calipers pinch 350 mm discs up front, while the rear discs are 302 mm. Plenty of stopping power, then. 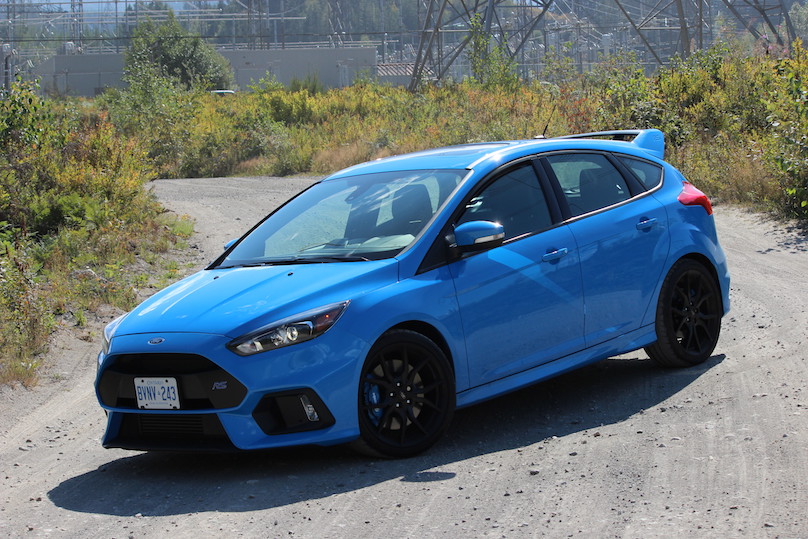 The Focus RS comes with AWD as standard, whose torque-vectoring system can transfer up to 100 per cent of available torque to a single wheel. That means understeer is greatly reduced and, coupled with specially-tuned dampers (which can be set to two stiffness levels) and a more direct steering rack, turn-in is much more immediate. In the most extreme cases, brakes are automatically applied to help rotate the car, too. 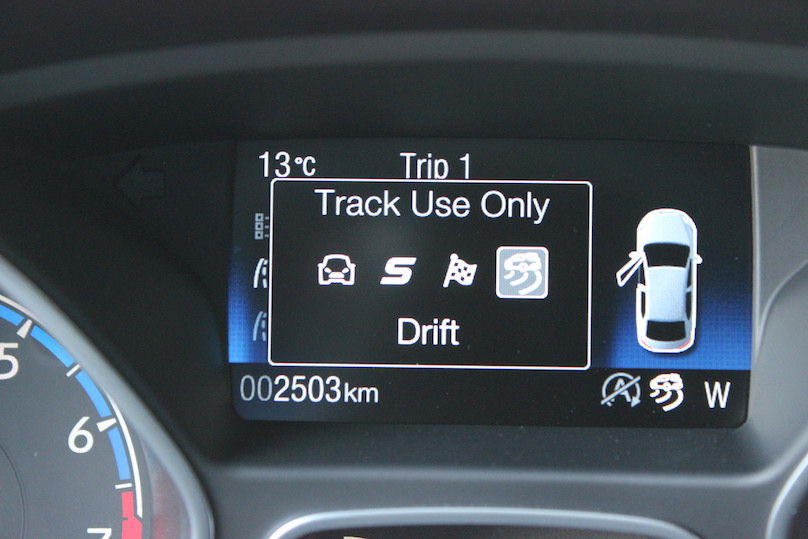 Normal, Sport and Track modes that modify your steering, throttle and damper settings are all pretty familiar; we’ve seen variations of modes like this on everything from Yarises to Ferraris, so that’s not huge news. What is newsworthy is the addition of a “Drift” mode, which essentially tells the computer that handles your AWD power to allow you to slide your hatch around. If you’d rather customize your settings, then the dampers can be individually set regardless of your drive mode. 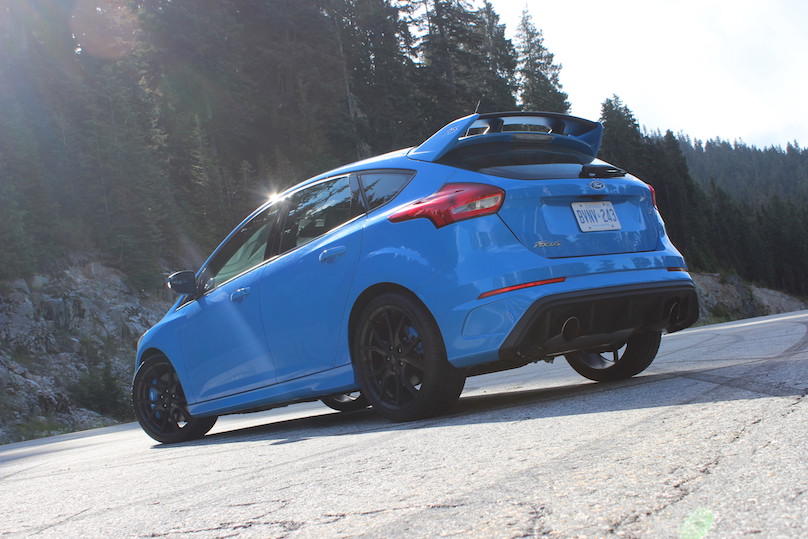 Big wings, scowling headlights, aggressive front splitters…it’s all here. Three colours come as standard – Shadow Black, Frozen White, and Stealth Grey – but if it were up to us, we’d spring for the extra $995 required to get the spectacular Nitrous Blue, as seen here. In a car like this, you want maximum visual impact; since when has black been the best choice for that? Then again, the blue brake calipers do stand out that much more against a black car…

THOSE wheels and tires 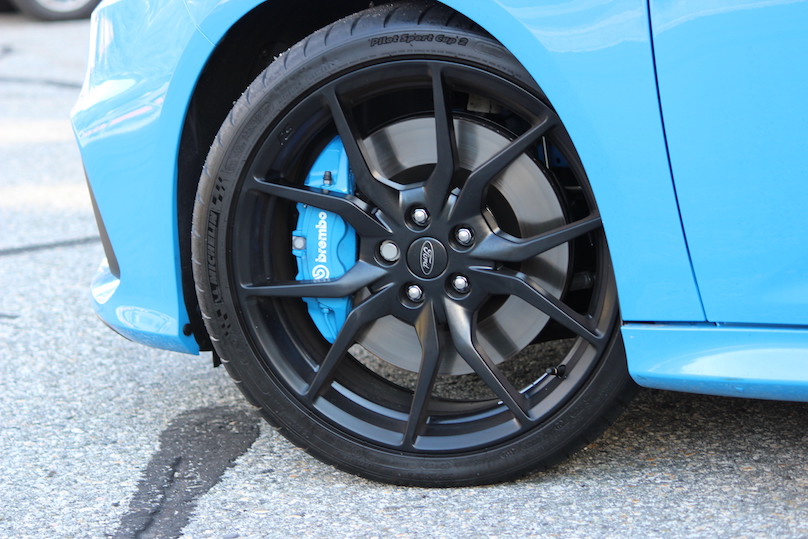 You only get one wheel choice, but the black 19” forged alloy wheels that come as standard are so gorgeous, I can’t imagine anyone really being bothered too much about the lack of choice. They are wrapped in ultra-sticky Michelin Pilot Sport Cup 2 tires, which are normally reserved for fire-breathing sports cars and coupes such as the BMW M4 GTS. 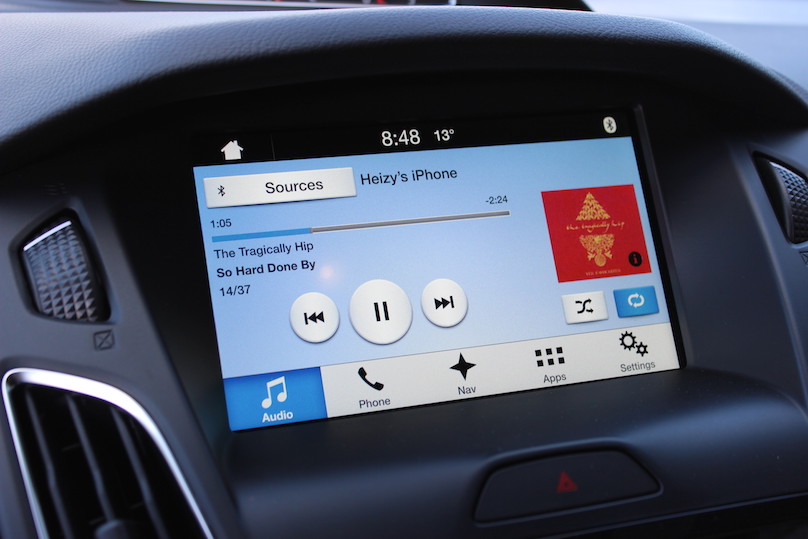 Much ado has been made about SYNC3 lately, but when your new tech is such a marked improvement over what you used to offer, it’s worth the hype. A more responsive touchscreen, nicer graphics and more intuitive interface makes Ford’s latest offering one of the best in the biz. 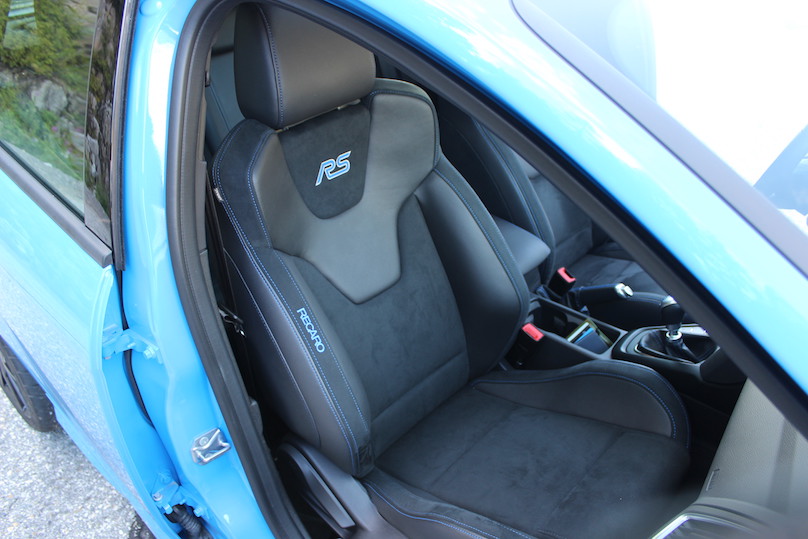 If it’s in a fast Ford these days, then it’s gotta be Recaro. Like the Mustang with which the RS shares its engine, it also gets a pair of deep-bolstered buckets finished in leather and Alcantara suede. Better still, Ford has managed to find a seating sweet spot that can accommodate a number of body styles. 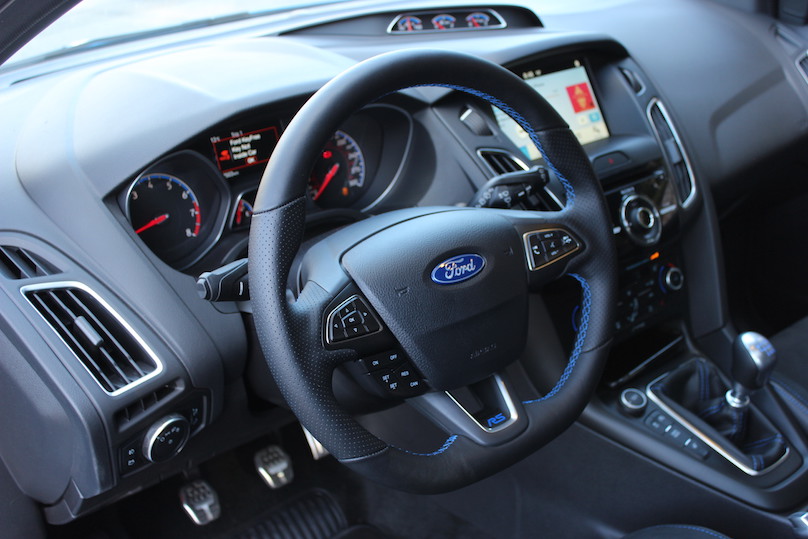 Until this year’s Shelby GT350, not even the highest-po Mustangs have gotten a flat-bottomed wheel, but the RS gets one. It’s also nicely chunky and gets the same body-colour matched stitching that the seats do. It connects you to a steering rack that now requires 2 turns to get from lock-to-lock, as opposed to 2.5 on the ST. 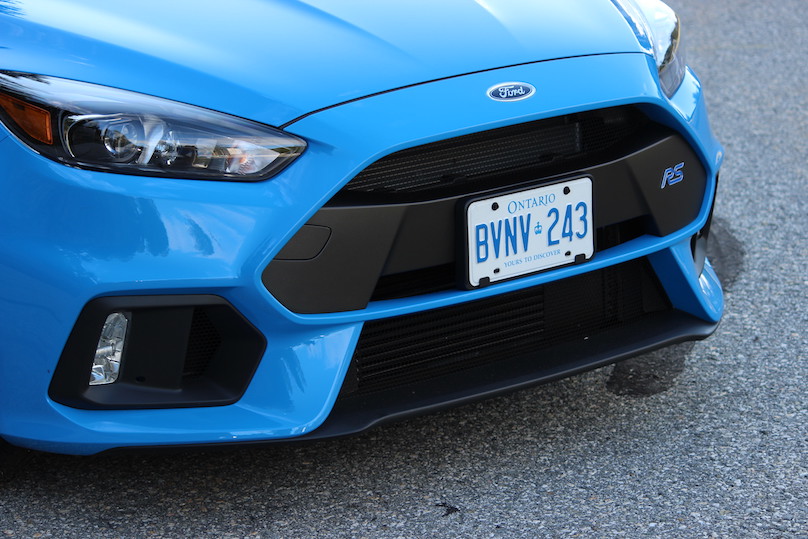 Well, you’d better get used to it, because if our week with the car is any indication, you’re going to get lots of them. Even a friend of mine – a Mini owner through and through – took time to comment on the car. And she NEVER does that.