The Five Most Interesting Reveals from the 2021 LA Auto Show

The auto show is back, and while the LA show might not be what it was in 2019, several automakers embraced the return to the in-person event to showcase their latest and greatest. Some, though, are greater than others, so here are five of the most interesting vehicles. Subaru’s electric Solterra is missing from the list, (along with the nearly identical Toyota bz4X) because we covered it more in depth in an earlier story. 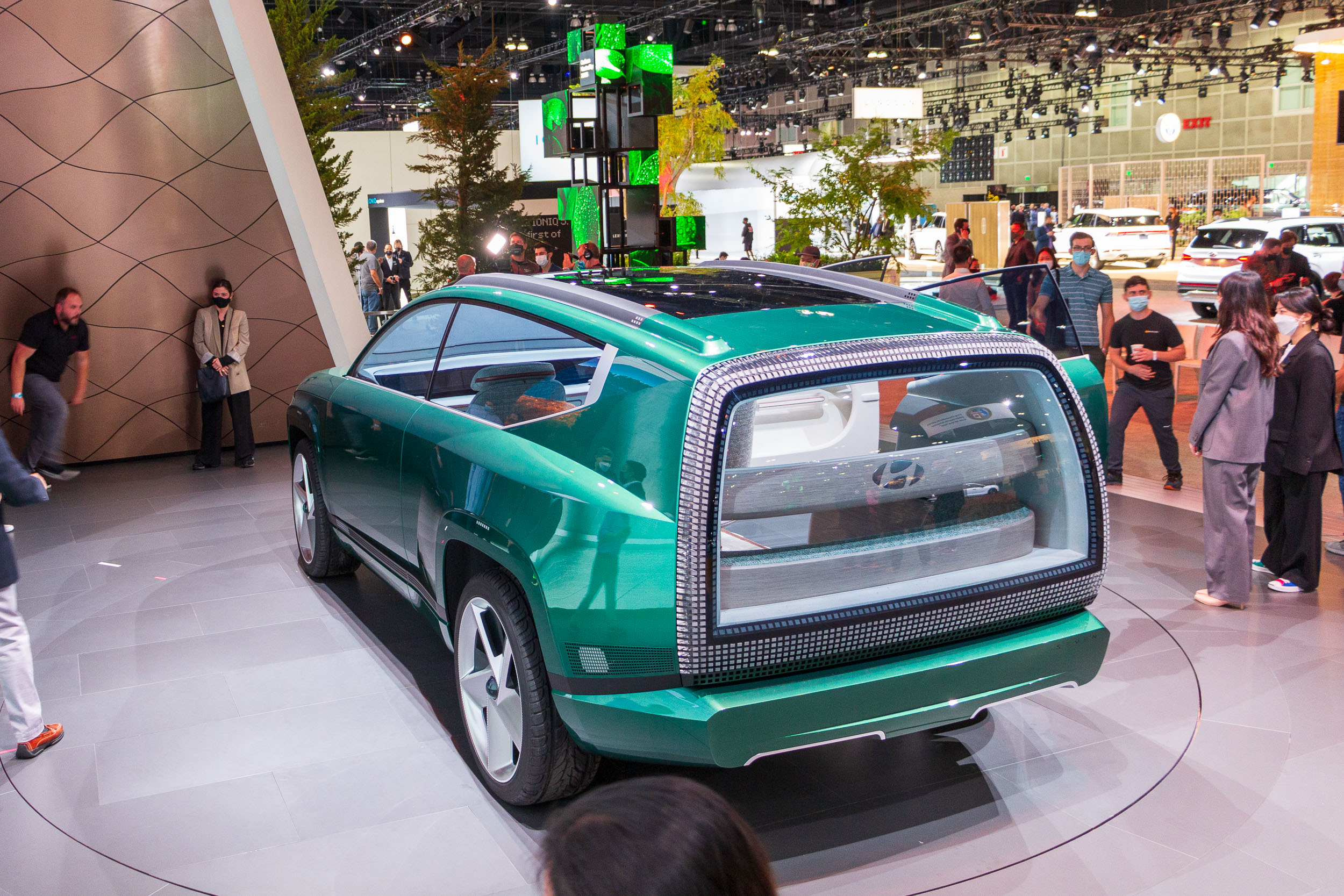 The Seven Concept is the latest vehicle to be based on Hyundai’s all-EV platform and it’s one of the coolest potential new models we’ve seen in some time. With coach doors on the right and a single door on the left, plus a completely vertical glass rear end, it defies description. So does the interior, which boasts chairs and carpeting that look best suited to your living room. Lamps in the doors augment that feeling. It has Hyundai’s Parametric Pixels lighting, active air flaps on the wheels (yes, the wheels), and a wheelbase around 200 mm longer than a Palisade three-row. Designed for an autonomous future, it has a control stick for the driver that disappears when the car’s doing the driving. 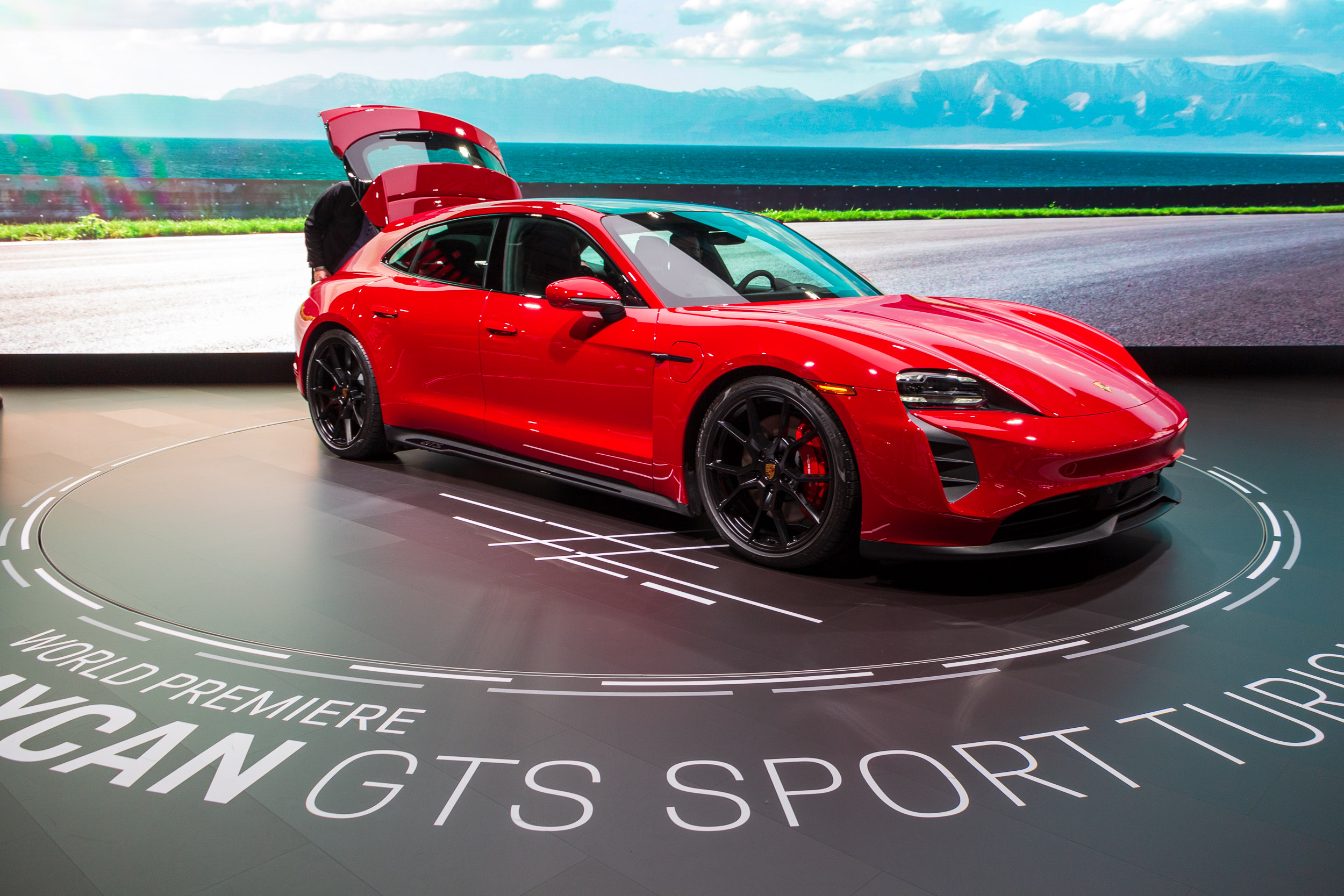 The wagon version of Porsche’s electric Taycan has been on sale for a while now, but in the lifted and slightly more rugged Cross Turismo version. Today the automaker revealed what it is calling the Sport Turismo. The wagon without the lift. Even better, the new model launched the GTS version of the Taycan as well. GTS, in Porsche speak, means loads of performance goodies and sharper dynamics, without going to the full Turbo or GT model. The Taycan GTS gets 590 hp from its two electric motors, almost in the middle of the 4S and Turbo. It gets Porsche’s 800V architecture and 93.4 kWh battery, able to hit 100 km/h in about 3.5 seconds. Suspension tuning is GTS-specific and comes with adaptive air suspension, torque vectoring, and Porsche’s Sport Chrono package. 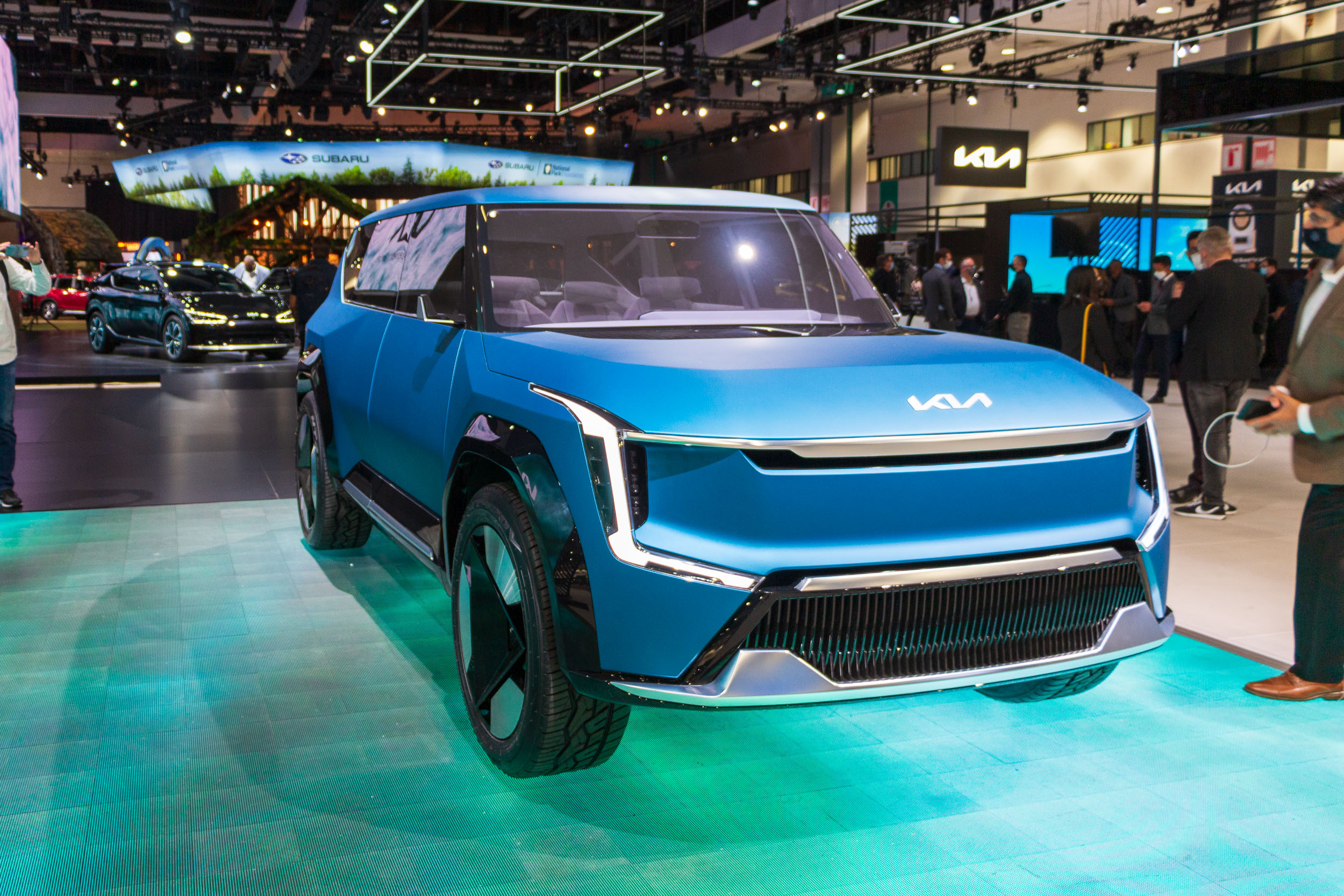 The three-row EV9 concept looks like a cartoon, even without seeing it surrounded by other more conventional vehicles. The proportions and paint finish can make it look like it’s VR, even if you’re standing beside it. A predicted range of 482 km is accompanied by 350 kW charging, but we’re more enamoured with the pixel lighting that dances and plays as you look at the vehicle. The cabin uses ultra-thin seats to give it plenty of room in all three rows. On top of drive modes, Kia has given it what it calls Pause Mode, letting passengers in row one and three face each other and converse; or Enjoy Mode, which flips all three seats backward to let you enjoy the outside (through the open hatch) from the comfort of the vehicle. 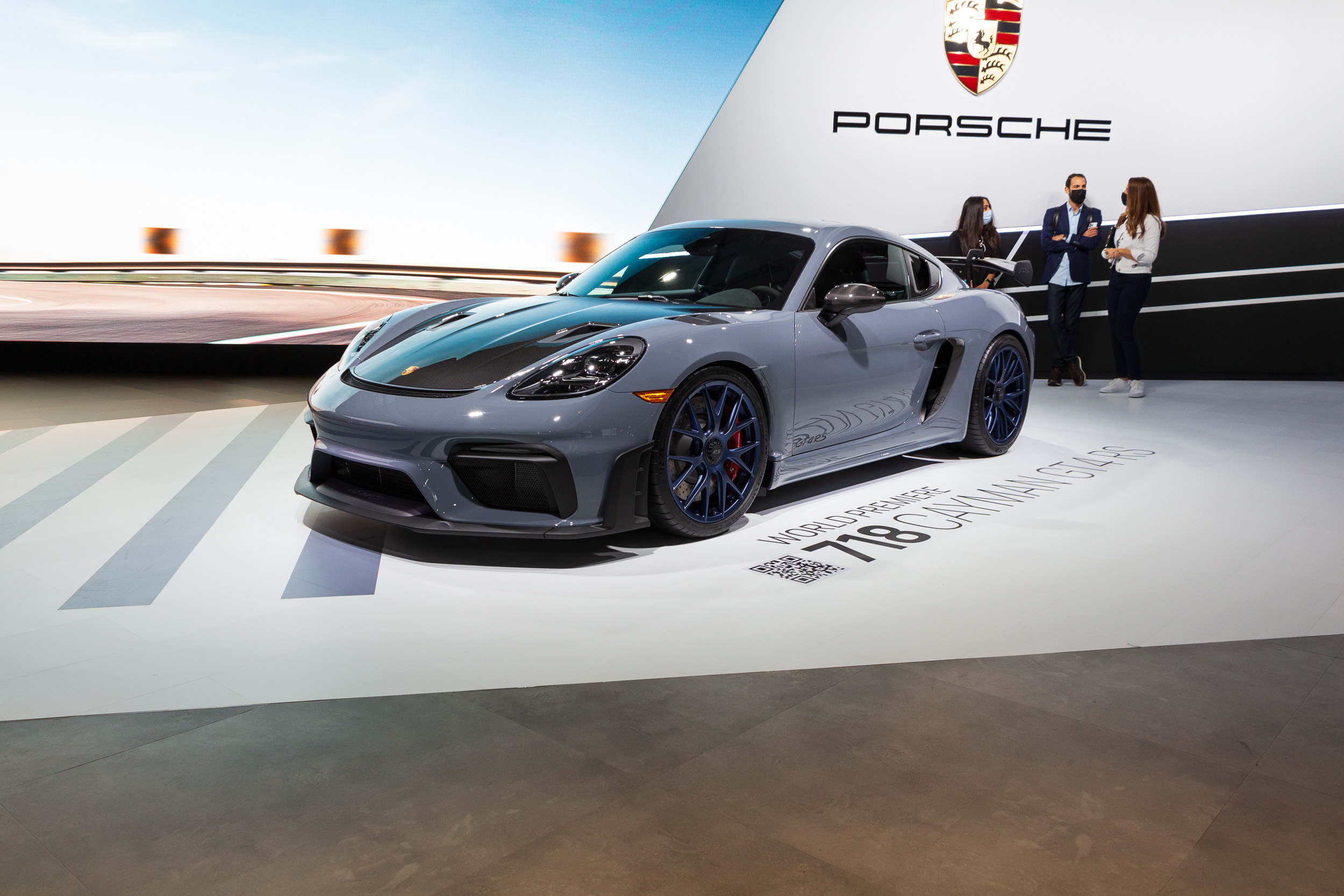 While the brand is clearly moving electric, this is Porsche’s shout from the hilltops that internal combustion is not dead yet. And how! The automaker took the 9,000 r.p.m. 4.0-litre flat-six from the 911 GT3 and crammed it into the Cayman. 493 hp is 79 more than the non-RS Cayman GT4, with exterior changes including air intakes in place of the rear side glass that are meant to make themselves heard as well as suck in more air. It also has a swan neck rear wing adopted from the 911 RSR racer that helps the GT4 RS make 25 per cent more downforce than the GT4. The track-focused suspension uses ball joints in place of bushings and is stiffer all around. Porsche says it’s nearly 24 seconds quicker than the GT4 on the ‘Ring. Oh, and there will be a special Porsche Design watch offered only to buyers of the car. 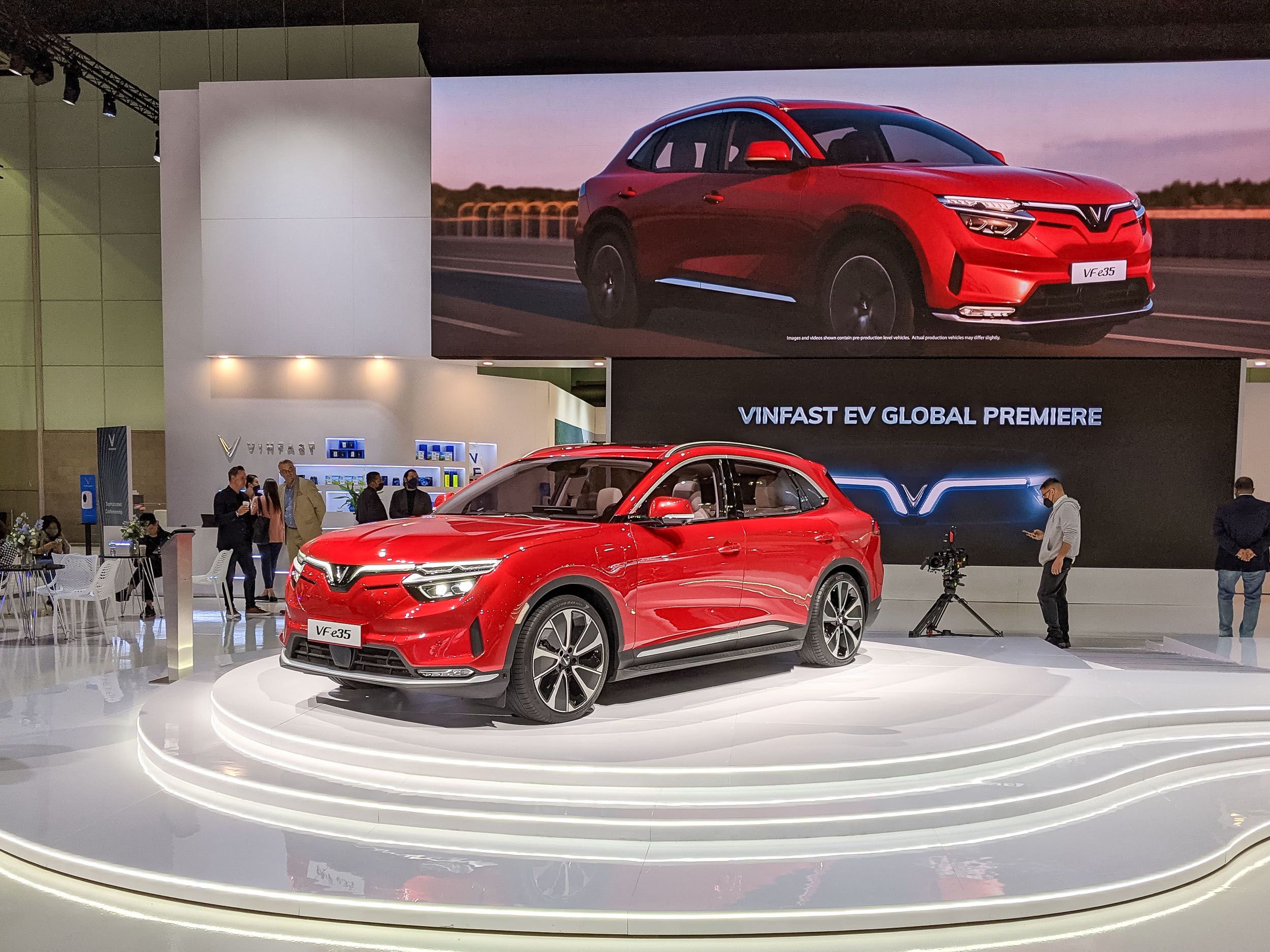 VinFast is just one of about a dozen EV startups at the LA show, so what makes them different? For a start, the automaker has built actual vehicles before, in mass production quantities. It took over a GM factory in Hanoi and is building restyled GM vehicles under license. It’s also built vehicles based on BMW’s 5 Series and X5, and is part of the largest conglomerate of companies in Vietnam. More relevantly, the brand plans 38 showrooms in Canada by the end of 2023, and has actual Canadian employees. The e35 and e36 are electric crossovers, the smaller e35 has an 86 kWh battery, the e36 about 90 (both figures net, not gross). Still, only time will tell if this is another vapourware EV or one that can back up its promises. 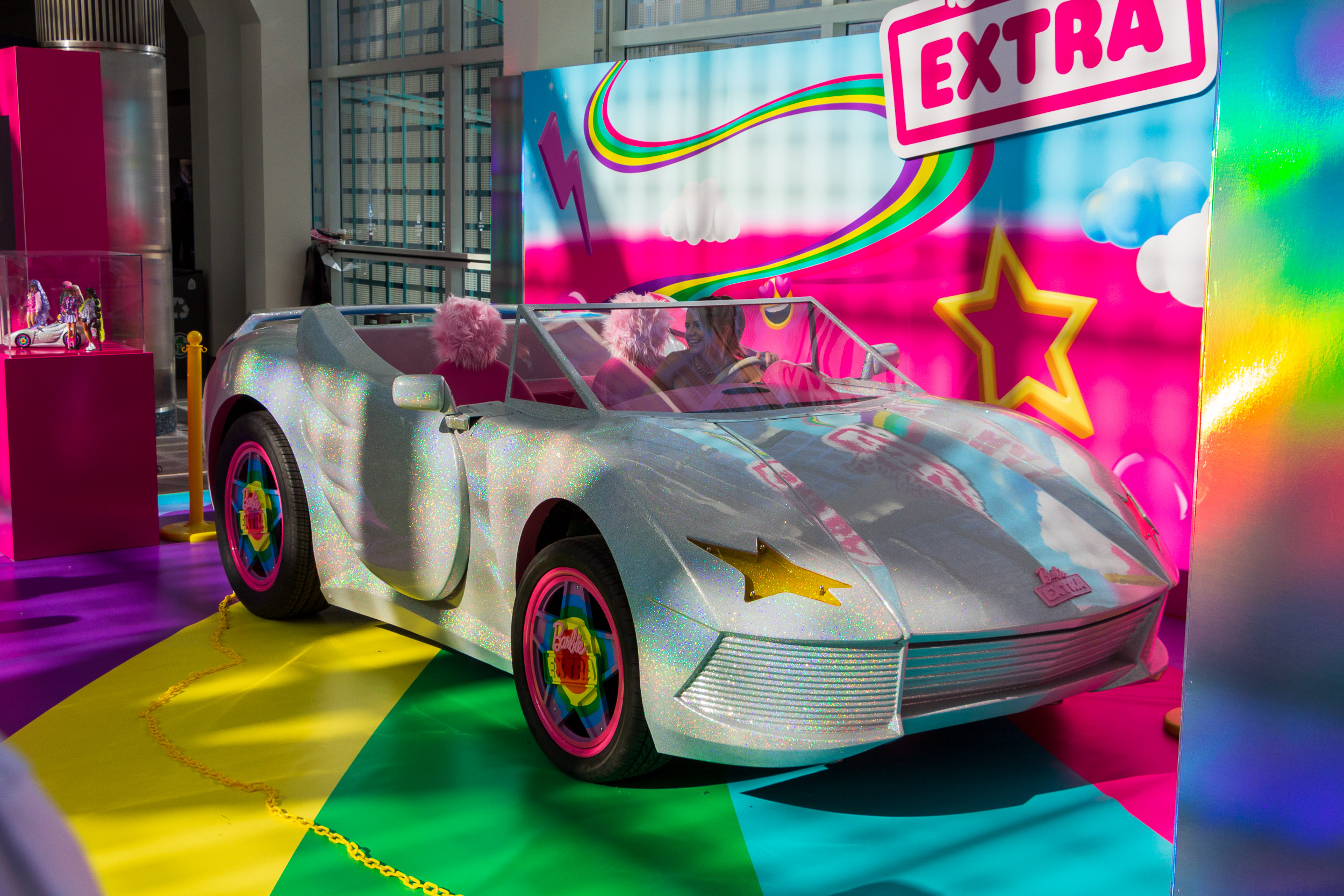 A strange entry on the press conference schedule that read simply “Barbie” garnered significant media attention leading up to the show, but when the cover came off, it was more than any of us had expected. A full-size version of the toy designed to accompany the Barbie Extra doll line (to help sell more toys, not expand the company’s business plan), it was a Fiat 500e completely rebodied using the same CAD files used to create the toy. With a Lambo-style nose and wing doors, this would be a pretty fun ride around town.