SPRINGTIME RAGTOPS: Four cars to enjoy the sun and the wind

Here are convertibles for all seasons that won't break bank.

The vernal equinox ? spring! ? has arrived at last, a fitting time for another look at some affordable second-hand convertibles.

This time, we?ve uncovered what $15,000 will buy in a four-seater ragtop for those drivers who want to bring more than one friend. Except for the Ford Mustang, these cars are based on front-drive platforms to keep development costs down and provide some semblance of practicality.

After all, this is Canada and a convertible has to earn its keep during the other nine months of the year when the sun isn?t shining. As always, our used-car picks emphasize dependability and ease of ownership. 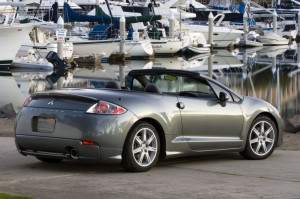 Kudos to Mitsubishi for calling its Eclipse ragtop the Spyder. Normally you?d have to spend $250 large to get that moniker ? along with the Italian workmanship. Built on the Galant sedan?s widebody front-drive platform, the all-new-for-2007 Eclipse Spyder was a sight for sore eyes with its swoopy profile.

The sculpted cockpit was as interesting as its shapely body with better-than-average materials, save for some budget plastics in a few spots. While the low-slung front seats are comfortable, the two-place rear bench is suitable for children only. The insulated three-layer convertible top folds down in just 19 seconds at the touch of a button. Unfortunately, the small rear window hampers the view out back.

Reported mechanical issues include a truculent air conditioner, creaks and rattles in the dashboard and paintwork that may chip and scratch a tad too easily.

This Mitsu is a looker and gives buyers the choice of having a sheep in wolf?s clothing with the noisy four cylinder, or a proper sporty car with the V6. Go for the six. 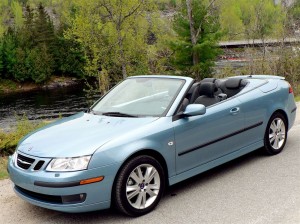 Thanks to the deep pockets of Hong Kong-held NEVS, Saab has restarted production of the 9-3 sedan in Trollhattan, but chances are we may never see a spanking new 9-3 convertible around these parts. That?s okay, because there are still some old ones in our midst and Saabs age gracefully.

The wedgy Swedish convertible was underpinned by GM?s front-drive Epsilon platform, shared with the Opel Vectra and Pontiac G6. The standard turbocharged 2.0-L Ecotec four-cylinder churned out 210 hp, tied to a six-speed manual or five-speed automatic transmission. Aero models used a 255-hp turbo 2.8-L V6, which was available with a six-speed automatic or manual transmission.

For the first time, Saab offered an optional Haldex all-wheel-drive system with the V6 in 2008, and with the four cylinder the following year. The cabin is reasonably roomy and the trunk remains spacious even when the soft top folds down. Saabs hail from Europe, so the electrical issues ? failed door locks, headlamps, computers, alarms and ignition systems ? seemingly go without saying.

Despite the niggling setbacks, the 9-3 is a well-engineered auto that can go the distance, not to mention that owners become part of a rather exclusive club. The lack of dealer support is made up by enthusiastic third-party garages, such as Beacon Motors in west Toronto. 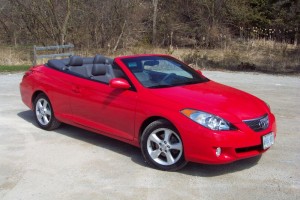 With a name like Solara, a ragtop was a foregone conclusion when the Toyota Camry coupe was unveiled. But unlike the first-generation model that required a roof-o-dectomy during assembly down the road in Cambridge, the second-gen Solara was designed as a convertible from the ground up with enough rigidity baked in to make it a solid ride.

The interior fit and finish was exemplary ? it?s hard not to recognize the Lexus bloodline. A mix of metallic and satin finishes along with high-quality plastics gave the Solara an upscale look. Rear-seat room was generous as was the car?s equipment level, which left little to be desired. The soft top was fully lined, power-operated and featured a large heated glass rear window.

The Solara used Toyota?s 210-hp 3.3-L V6 tied to a standard five-speed automatic transmission (a four-cylinder model was marketing in the U.S.). In terms of owner complaints, there are few. Easily warped brake rotors are a common lament, along with poor audio reproduction, Bluetooth issues and some errant rattles.

The Solara is the most capacious ragtop of this bunch. It can whisk four adults over long distances in perfect comfort, which makes this a boulevardier of the first order. You should never mistake the Solara for a sports car. This hound don?t hunt. 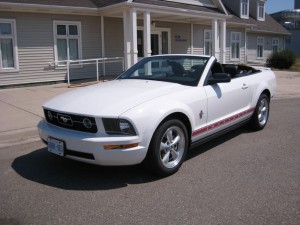 Inspired by its iconic 1960s-era ancestor, the new-for-2005 Mustang convertible borrowed plenty of visual cues from the past.

It adopted its rear-drive DEW chassis ? taken from the Lincoln LS, Thunderbird and Jaguar S-Type ? for foundation duty. To keep the Mustang?s price reasonable, the bean counters specified a MacPherson strut front suspension and a mundane solid axle rear setup.

The base V6 was a somnolent SOHC 4.0-L that made 210 hp and 240 lb.-ft. of torque, tied to either a Tremec five-speed manual transmission or optional five-speed automatic.

Some classic Mustang styling touches lived on inside, with enough space left over for four adults to sit in reasonable comfort. Ride quality was considerably better than any muscle car exhibited in the 1960s.

So the Mustang isn?t perfect, but like the Eclipse it offers a choice between a serene evening cruiser with the V6 and a full-bore street shaker with the V8.

And, yes, adding racing stripes does make it quicker.

An RV, a Bear and Alberta – all because of COVI...