These affordable used vehicles are dependable and efficient.

With gasoline prices rising to record-breaking heights, motorists are bound to see ads for bogus “fuel-saving” gadgets again, designed to siphon money out of unsuspecting wallets.

Popular Mechanics has dissected much of the phony technology, things like hydrogen generators, ion generators and vortex generators – the latter being a fan installed at the engine intake that induces a mini-tornado to better mix the fuel and air for improved combustion.

PM discovered that the vortex reduces power and increases fuel consumption, ironically. Another hoax is the fuel magnet, which attaches to the fuel line to break up the orderly rows of gasoline molecules into a more random orientation to promote complete combustion. As if.

In reality, vehicle manufacturers have been making the internal combustion engine eco-friendlier since the first energy crisis in 1973. Automakers turned to light-weighting – replacing heavy steel components with plastics – and smaller engines and smarter transmissions that work more efficiently.

If you’re contemplating a more fuel-efficient vehicle, here are six thrifty, dependable used models to consider. Why used? In addition to a lower purchase price, you can take delivery tomorrow, instead of being placed on a waiting list for a new model.

Redesigned for 2018, the minuscule Kia Rio is a surprisingly sophisticated subcompact that sells well in many parts of the world, including Europe, where cars like this are expected to do it all. The Rio is praised for its solid construction, nimble handling, comfy seats and low ownership costs. The cabin is handsome and free of gimmicks, and there’s just enough space to accommodate four people well, or five in a pinch.

Motivating the wee hatchback and sedan is a single available engine, a direct-injected 1.6-litre four-cylinder making 130 horsepower and 119 pound-feet of torque, tied to either a six-speed manual transmission or optional six-speed automatic. Kudos to Kia for sticking with a conventional automatic transmission rather than a continuously variable transmission (CVT).

Fuel economy is good for its class; owners typically report getting up to 40 mpg (7 litres/100 km) in city/suburban driving, while highway cruising can yield 50 mpg (5.7 litres/100 km) with a light foot. Drivers get hybrid-like numbers without the expense of hybrid technology. On the downside, the flyweight Rio is susceptible to cross winds and the standard Korean tires are not very durable, owners report. 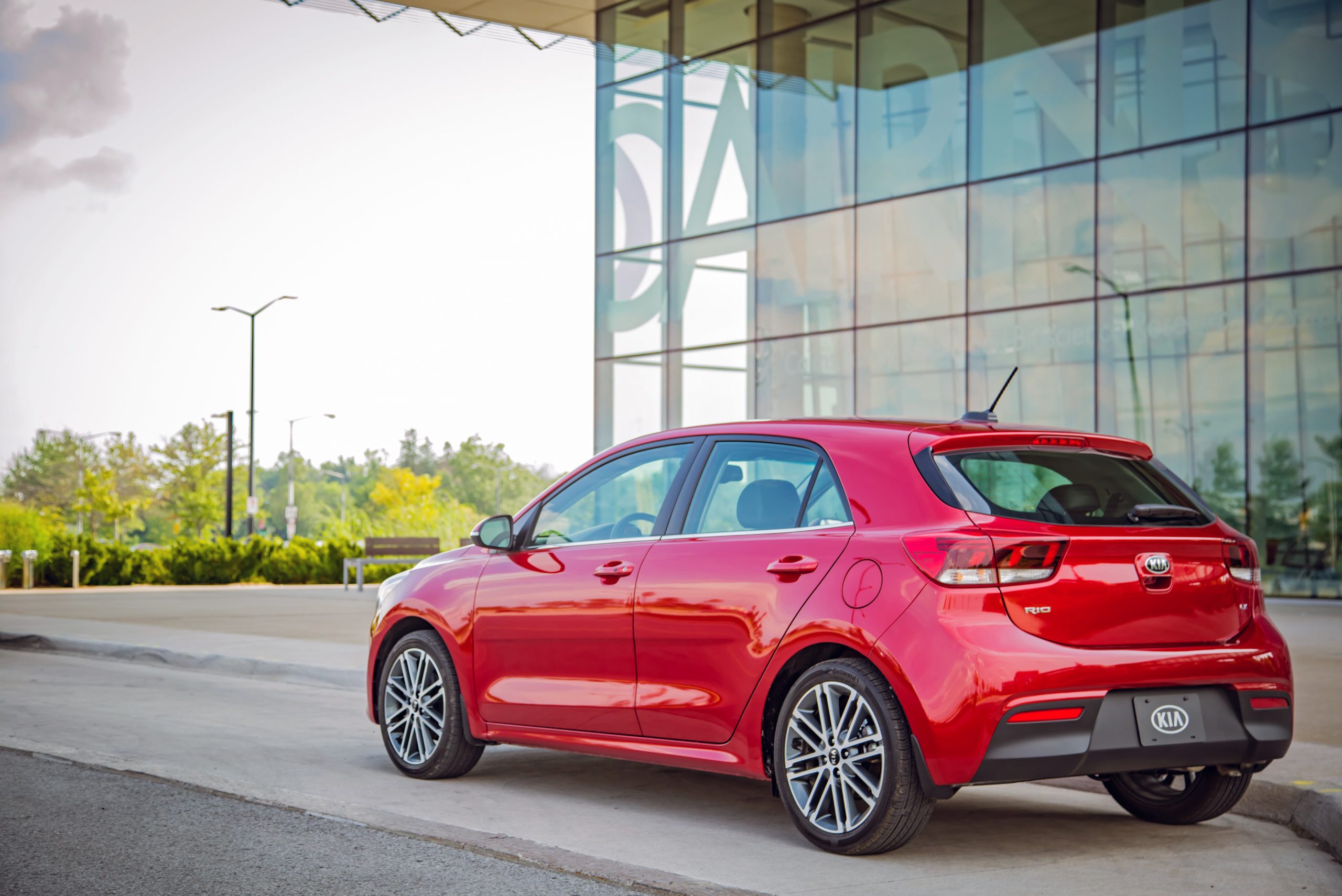 For the first time anyone can remember, the all-new 11th-generation Toyota Corolla sedan actually turned some heads thanks to crisp styling borrowed from the Furia design concept. A 10-cm wheelbase stretch paid dividends in terms of an improved ride and more rear-seat legroom, while better seals and insulation provided more quiet refinement.

Some proven components remained under the stylish new sheetmetal. The Corolla’s familiar 1.8-litre four-cylinder engine carried on, rated at the same 132 hp, although there was a revised version powering the Eco model. Its tweaked 1.8 makes more horsepower (140 hp), but less torque (126 lb-ft versus 128), thanks to modifications to the variable-valve system to improve efficiency.

Base models made do with a four-speed automatic transmission that has been fixture in Corollas since the Pleistocene Era, while upscale trims got a CVT automatic of Toyota’s own design. No question the Corolla is thrifty, exceeding 40 mpg (7.0 litres/100 km) in mixed driving, according to owners. But CVT-equipped models provide sleepy acceleration, and a small number have been buggy (try before you buy). Manual-transmission Corollas at least can keep up with traffic. 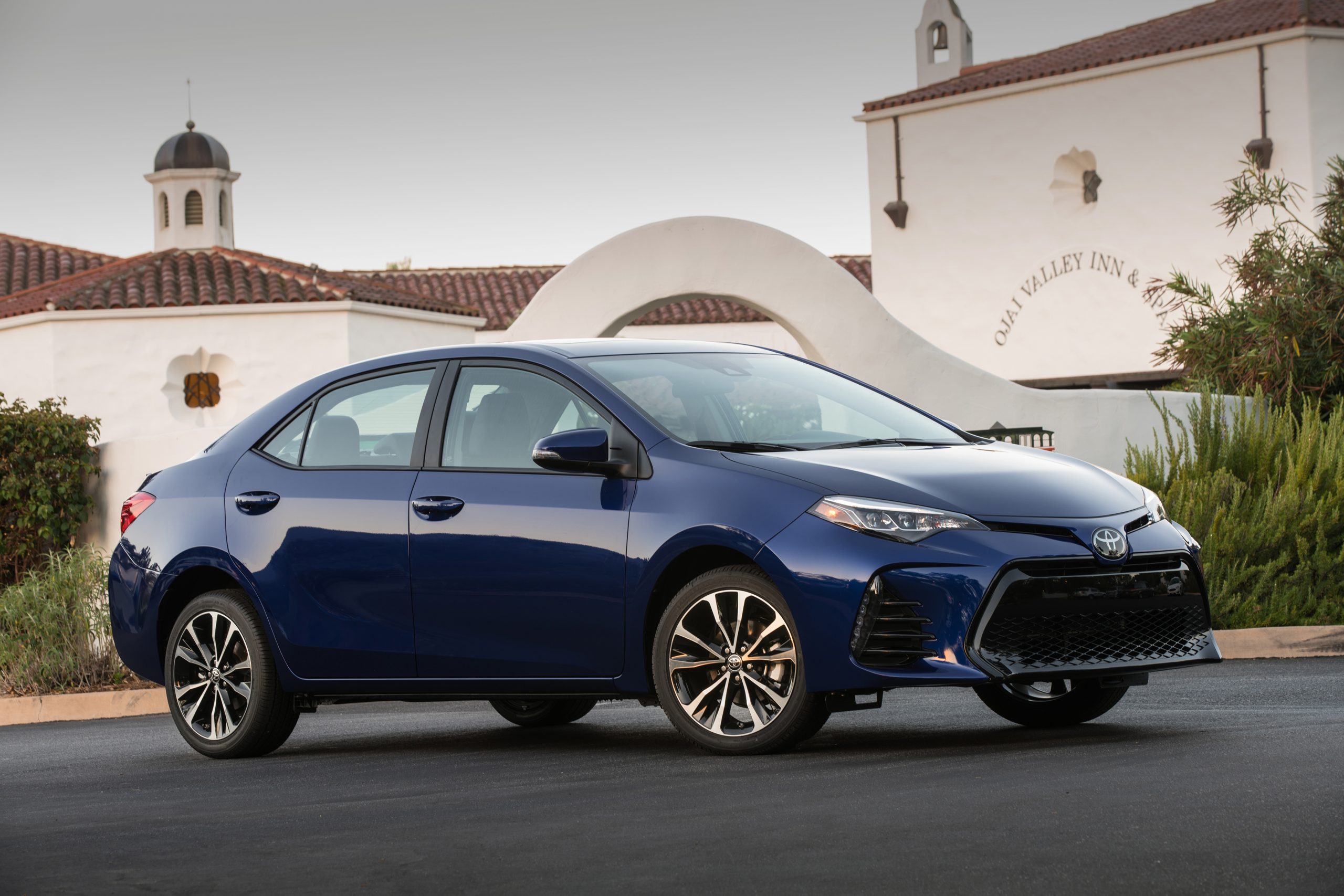 Volkswagen is infamous for its allegiance to diesel burners, but we’re going to zig here and endorse another maker: Chevrolet. In building a lighter and more efficient second-generation Cruze for 2016, General Motors drew on its global compact platform engineered largely by Opel, GM’s former German subsidiary.

The all-new Cruze was a handsome effort, complete with a big greenhouse that offers an airy environment for occupants and great forward visibility. It arrived as a four-door sedan and, in 2107, added a slick hatchback. Initially, all models used a 153-hp 1.4-litre four-cylinder turbocharged gasoline engine working through a manual or automatic transmission, both with six gears.

Its 1.6-litre turbodiesel four-cylinder returned for 2017, cranking out 137 hp and 240 lb-ft of torque when mated with the manual gearbox or a nine-speed automatic unique to the Cruze Diesel. While not as smooth as Volkswagen’s TDI, the Opel-sourced engine actually saves more fuel. Drivers can easily surpass 4.7 L/100 km (60 mpg), and even the gasoline engine can top 5.6 L/100 km (50 mpg) on the highway. 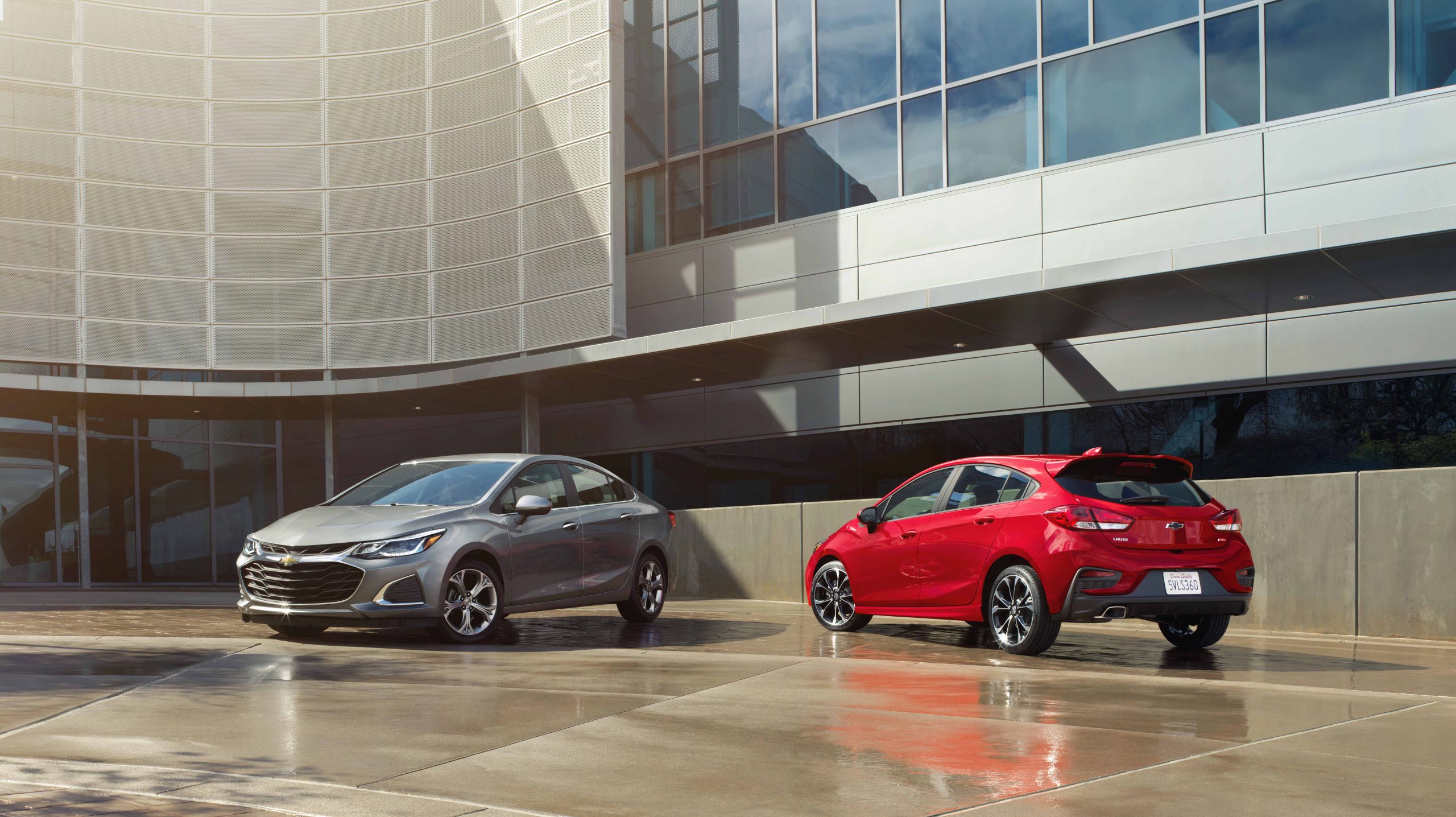 Inside the perfectly normal cabin is more space than a Prius can offer, although tall passengers in the back seat may not like the slope of the roof rearwards. The hatchback offers a lot of flexibility in terms of accommodating cargo, but there’s the obtrusive lift-over height to contend with.

Joining the Ioniq family is an all-electric model that uses an 88-kW electric motor producing 118 hp and 215 lb-ft of torque with 200 kilometres of range, while the Plug-in Hybrid variant features a bigger 8.9-kWh battery for greater electric-only operation, but retains its gas engine so range anxiety is never an issue.

The Ioniq’s fuel efficiency earns raves; owners delight in achieving 65 mpg (4.3 litres/100 km) with a light foot. Mechanically, there isn’t much to fret about. Early builds exhibited a few issues with the gasoline engine stalling or reverting to low output, a problem traced back to faulty fuel injectors and oxygen sensors. Canadians get an 8-year/160,000-km warranty on powertrain components. 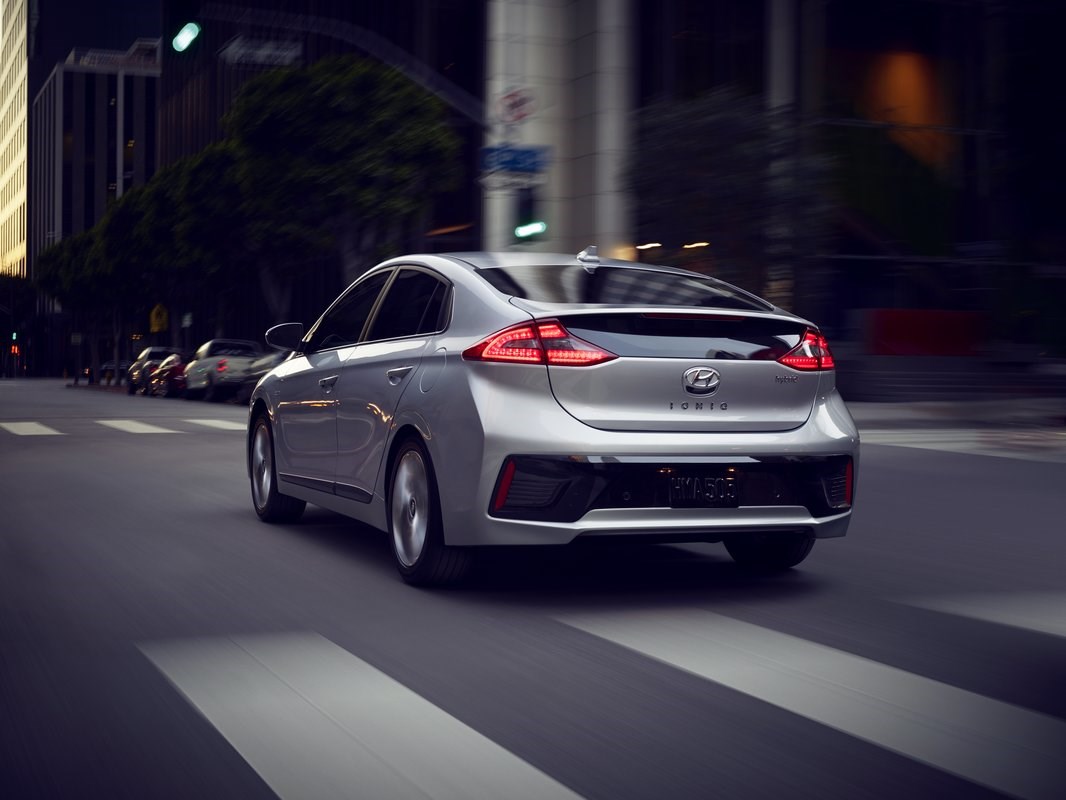 For families keen to ditch their gas-guzzling minivan for something more fuel-efficient, the Honda CR-V deserves a long look. Launched for 2017, the redesigned fifth-generation CR-V is based on the bones of the compact Civic sedan, despite its chunky profile. The latest version offers a spacy cabin along with an exceptional amount of cargo room that positions this compact crossover as a bona fide alternative to midsize SUVs.

All Canadian CR-Vs employ the Civic’s 1.5-litre turbocharged four-cylinder engine, making 190 horsepower and 179 lb-ft of torque using regular-grade fuel. A continuously variable automatic (CVT) is the sole transmission, and the optional all-wheel-drive system is updated with a smart, variable system capable of distributing the torque where needed.

Like many Hondas, the CR-V shines at the gas station. The turbo impeller spins madly to keep the crossover ahead of traffic, yet it sips fuel with the best of them. Owners are very happy with the fuel consumption, which averages 7.9 litres/100 km (36 mpg) in mixed driving.

Note that Honda modified the software in 2017-2018 CR-Vs to allow the turbo engine to warm up quicker and improve fuel combustion in cold weather to prevent unburned gas from diluting the oil. Additionally, the 1.5-litre engine is so efficient it reportedly had trouble producing enough heat to clear the windshield and warm the interior on frigid winter mornings. 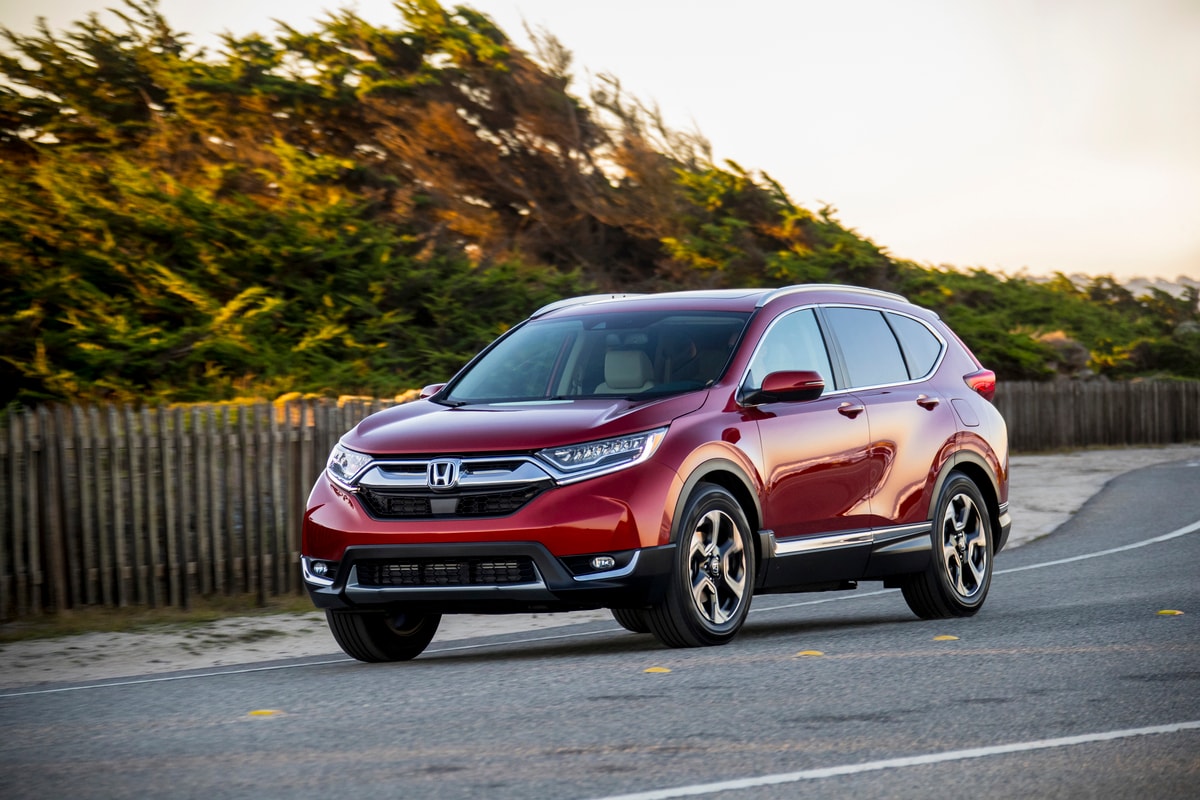 Who says saving gas has to be a somber drive? Unveiled in 1990, the Mazda MX-5 Miata took the world by storm with its racecar shifting, telepathic steering and g-whiz cornering talent. Like the Lotus Elan that it faithfully traced, the Miata is the epitome of efficiency. In crafting the fourth-generation Miata, engineers trimmed 100 kg of “excess” weight from a roadster that was already one of the lightest around.

Driving a snug two-seater has its compromises: the trunk is tiny and there’s precious little extra space in the intimate cabin for passengers or personal items. The car is fitted with a fabric roof that can be opened or closed manually within seconds (the RF Targa model has a power-folding hardtop). What drivers get in return for their sacrifices is a stunning road handler in the true sports car tradition.

The rear-wheel-drive MX-5 is powered by a 2.0-litre four-cylinder engine rated at 155 hp and 148 pound-feet of torque; a six-speed manual transmission is standard, with a six-speed automatic optional. Zero to 97 km/h comes up in 6.2 seconds with the stick, a half-second quicker than previous Miatas could muster. Best of all, this sports car achieves 42 mpg (6.7 litres/100 km) in real-world driving.

Mechanical issues are few and far between. Owners report a few prematurely worn clutches, windshields that chip and crack easily, and a few rattles. Keep in mind there’s no spare tire on board and the Miata is noisy on the highway – the price of having a visceral driving experience. 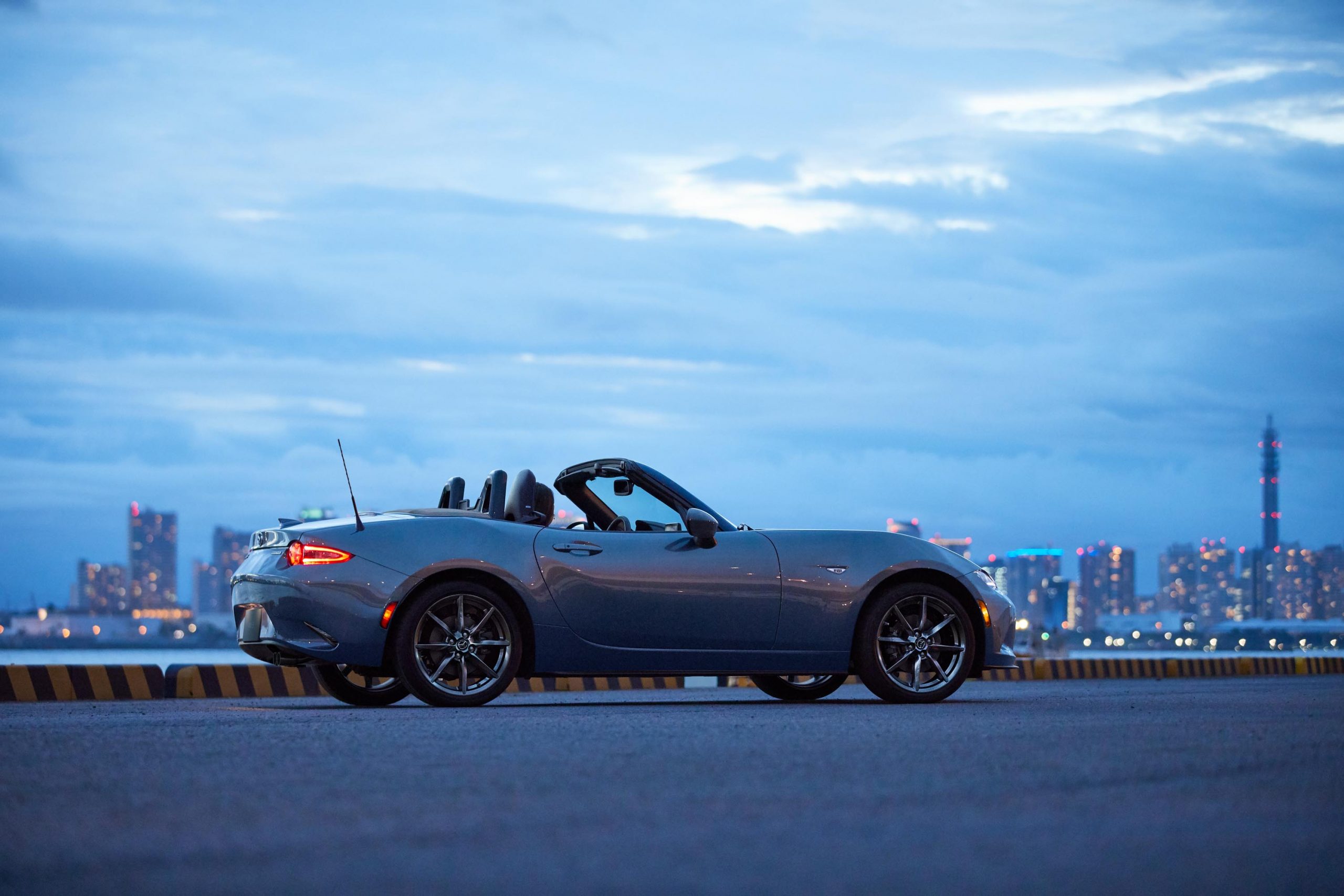 The market’s shifting to EVs and that explains ...