For decades, Italian cars ruled the streets when it came to style. Sure there were some good looking cars from other places, but nothing that could come close to the best from the likes of Pininfarina, Bertone, and even from in-house designers at Alfa and Lamborghini. But when it came to power, the Americans were the default choice. Sure a screaming but tiny displacement Italian V12 could deliver impressive figures, but they were always highly stressed and finicky. Big American V8s delivered serious shove with less effort and better reliability. And for boutique carmakers much less cost.

Over the years, some automakers have gone after the best of both worlds. Italian design with American muscle. So let’s take a look at some of the best Italian cars with American hearts. 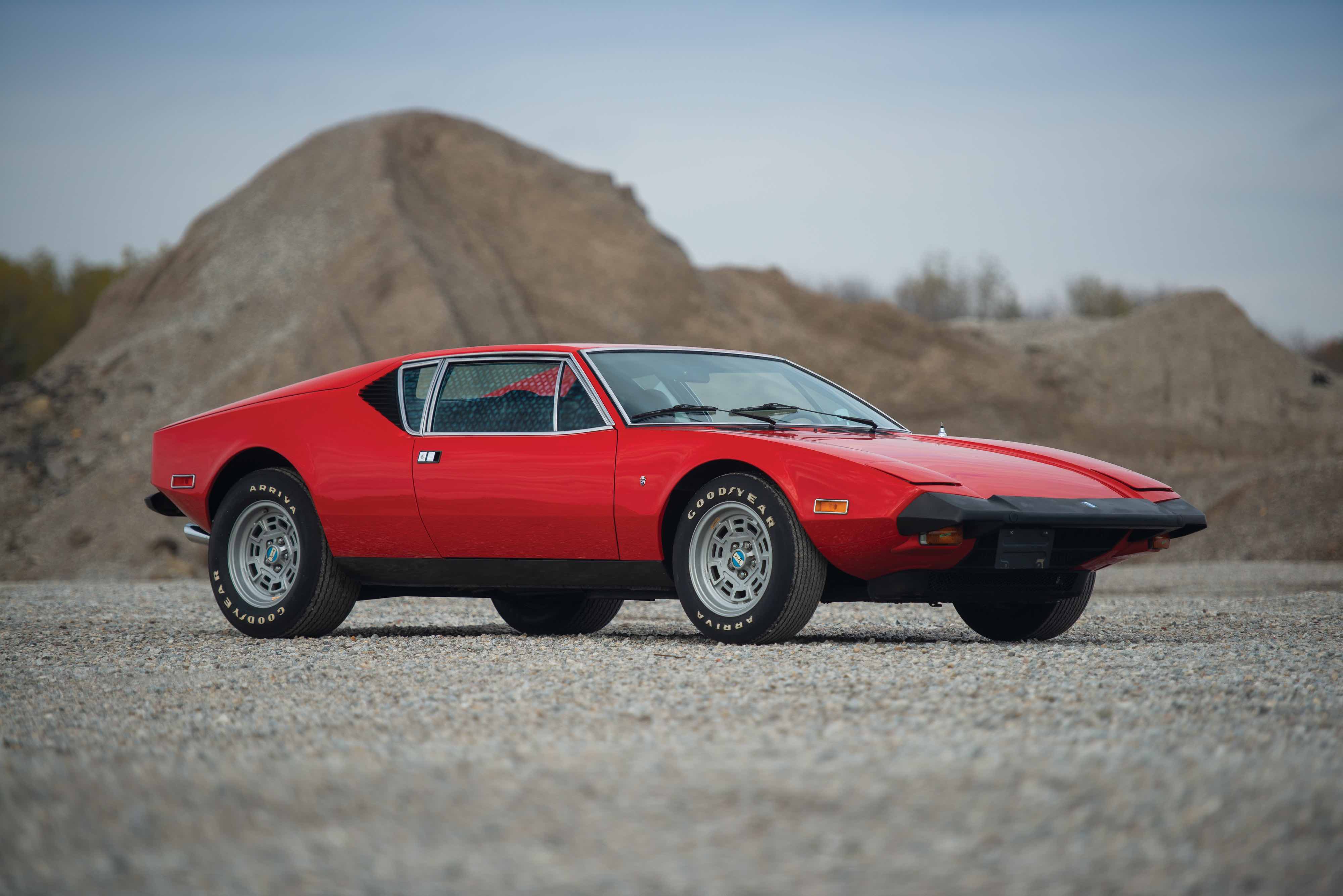 The De Tomaso Pantera is probably the best-known car to put a big V8 in an Italian shell. De Tomaso had a history of putting Ford V8s into Italian bodies, starting with the Mangusta of 1967. But it’s the Pantera that’s probably best remembered. Styled by Ghia, built in Modena, and packing 5.8L of Ford Cleveland V8 behind the driver. The Pantera was even sold at Lincoln-Mercury dealers and imported with some help from Ford. For the first few years, at least. That’s 326 hp and 344 lb-ft of torque when the car launched in 1971. 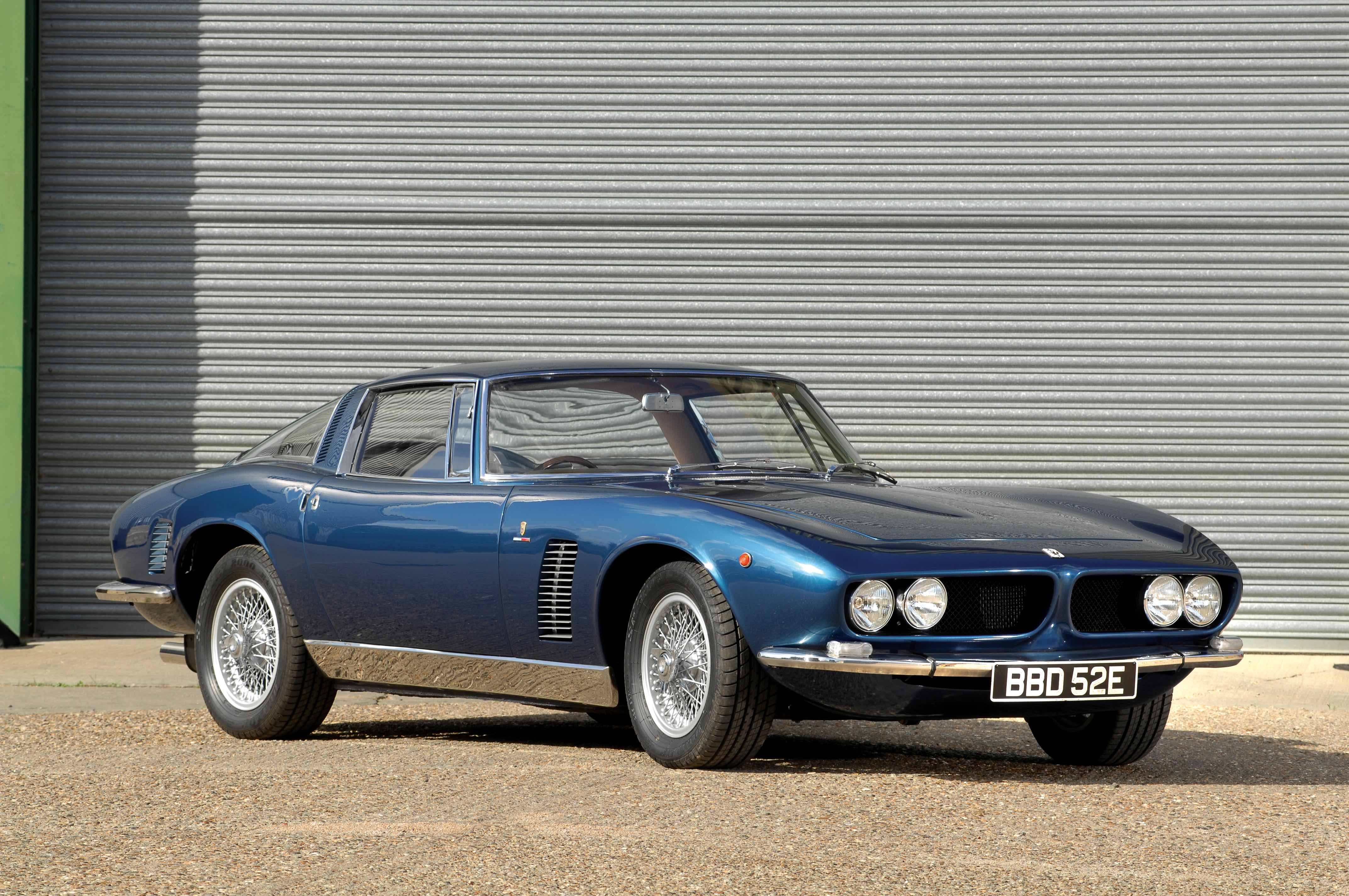 Iso started making transportation as a motorcycle manufacturer (Iso is actually short for isothermic because they originally started out with refrigeration) before moving to microcars (remember the Isetta?) and then moving on, as one does, to grand tourers. Like the Grifo.

It was aimed at cars like Lamborghini’s 400 GT. But instead of Italian bits underneath, the team of Giorgetto Giugiaro and Giotto Bizzarrini looked across the ocean to a 5.4L small-block Chevy V8 from the Corvette. That’s up to 350 hp combined with a four-speed stick. Later cars stepped that up once again. In 1968 the Grifo 7 Litri arrived sporting a 7.0L Chevrolet big block V8. 435 hp and more torque than Fiat’s entire lineup that year. Ok, maybe that’s an exaggeration, but it’s not much of one. 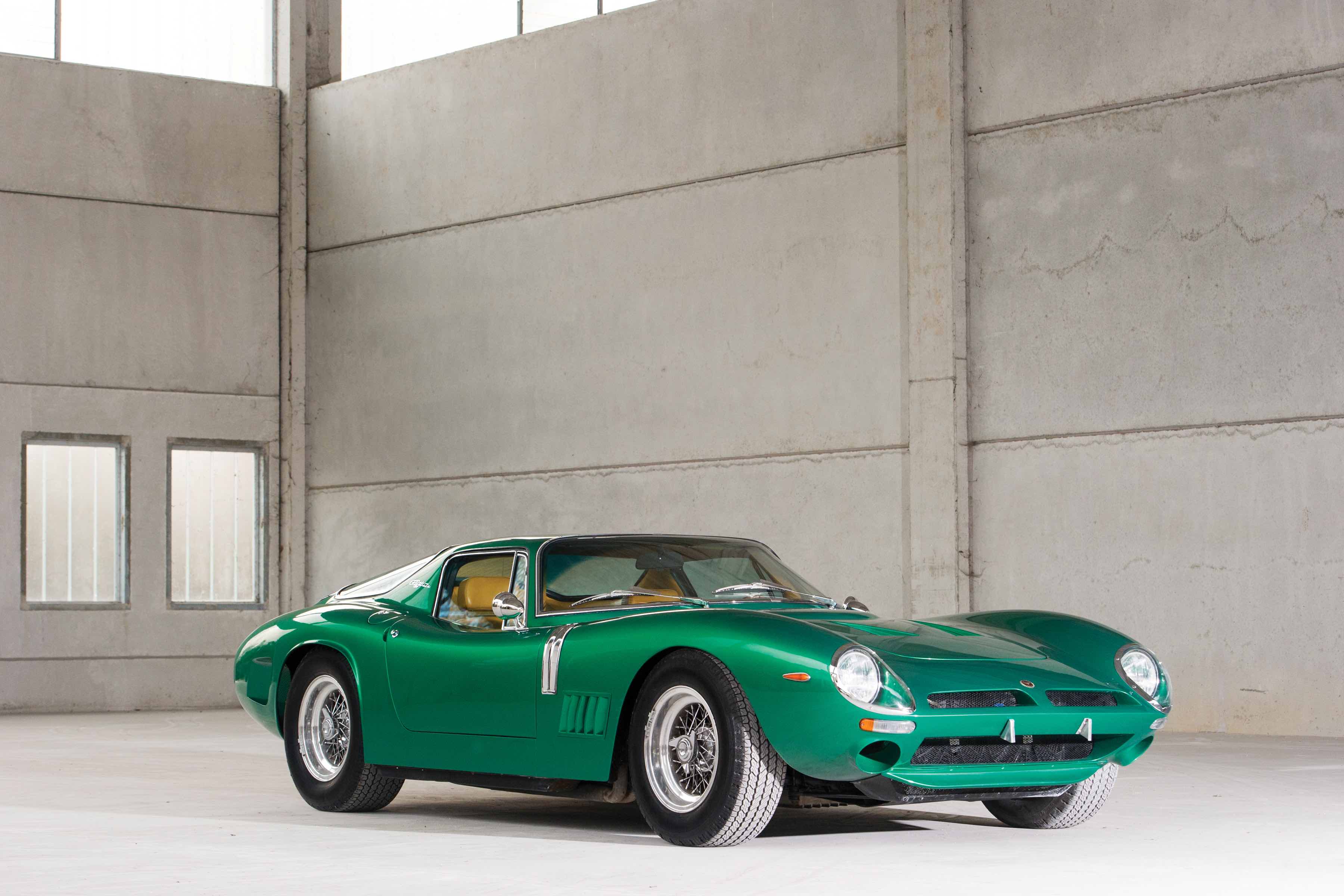 Giotto Bizzarrini is a name that’s associated with quite a few cars on this list. The former Ferrari chief engineer designed and helped develop many Italian superstars from the 1950s through the 1970s. One of the few that sold under his own badge was this. The Strada.

It looked mid-engine, but the powertrain was up front. A 5.4L Corvette V8 that offered up to 400 hp. The tiny tube-frame car was small and light. Tipping the scales at just 1,200 kg. It’s a striking car and represents some of the best styling of the time. 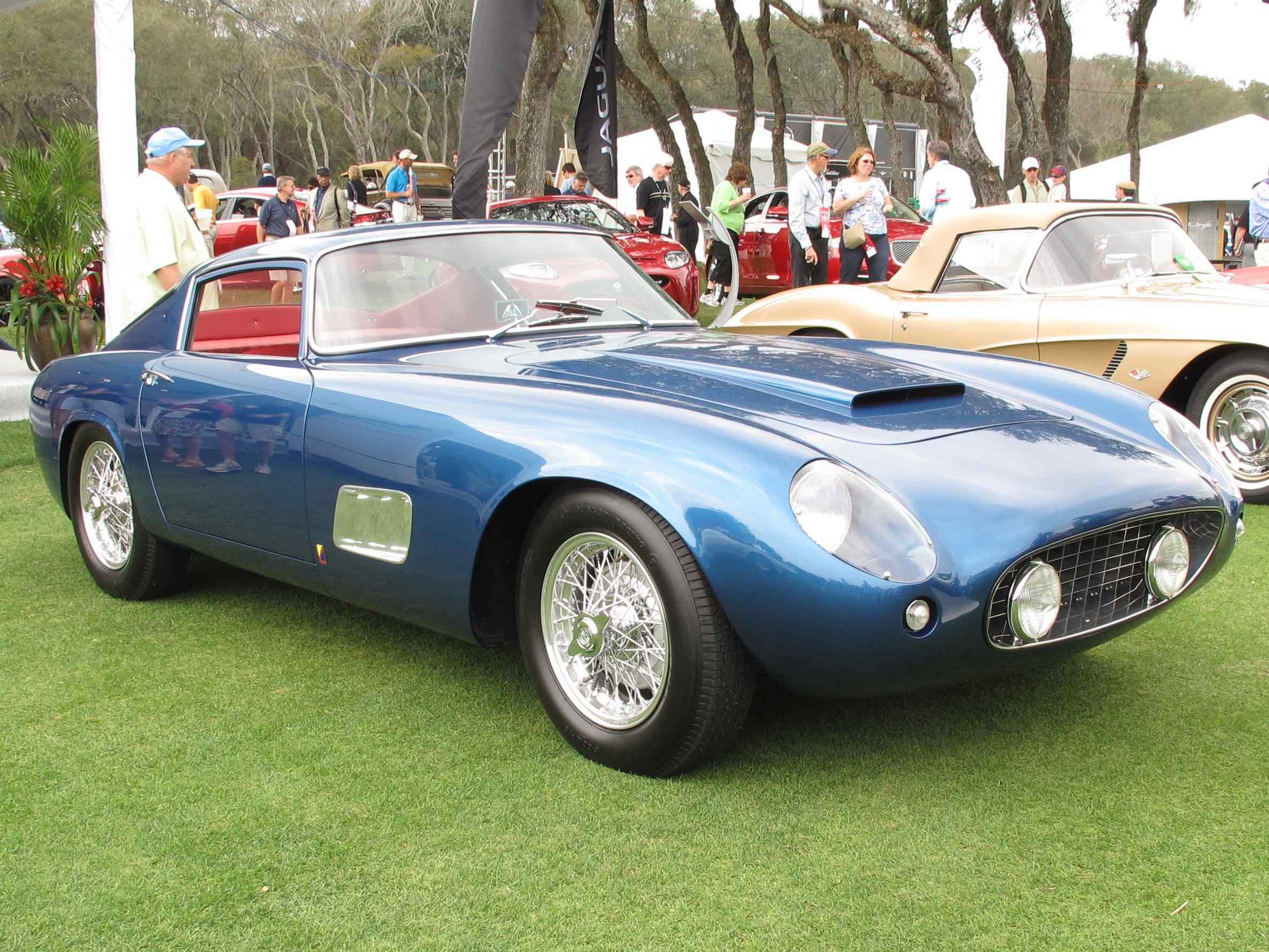 This car comes from a name that’s definitely known for putting an American engine into an Italian car. Carrol Shelby. But this time, it wasn’t a British car and it wasn’t a Ford powerplant.

A Texas oil tycoon had just suffered a broken crankshaft in his Ferrari. Not a cheap repair. But he knew Shelby and the two brewed up something special.

It was a car with bodywork from Scaglietti with the chassis of a Corvette. Since Laughlin, the oil man, also owned some Chevy dealers, they were able to get some bare 1959 ‘Vette chassis. Only three of the cars were built, but they are absolutely stunning. One even got the 4.6L fuel-injected 290 hp V8. 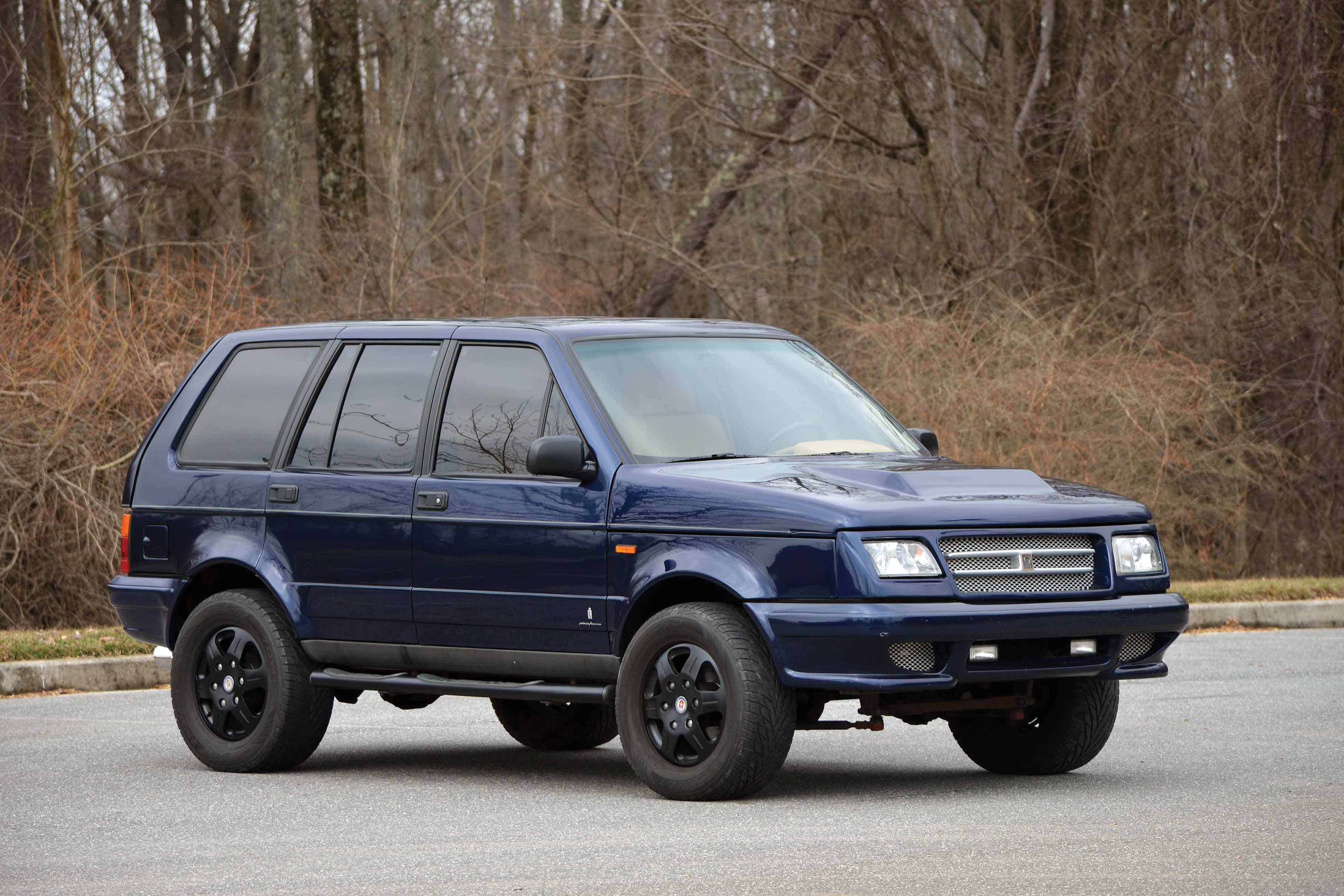 Not all of the cars on this list are from the old classics. The tradition of Italian body American engine continues. It’s even bridged to the SUV segment.

The Rayton-Fissore Laforza was sort of an Italian Range Rover. The boxy off-roader was designed for police use, but with the boom of luxury 4x4s, the Laforza was quickly repurposed into luxury duty.

With Italian leather inside, chunky bodywork outside, and locking differentials underneath. Built on a platform taken from an Iveco commercial van.

While European examples got some tiny gas and diesel engines, North Americans got Ford V8 power. A 5.0L Windsor V8 making around 225 hp. This was the early 1990s, after all. Later models got some more power, though. Some had Ford’s 5.8L V8 and some were even fitted with an optional supercharger. 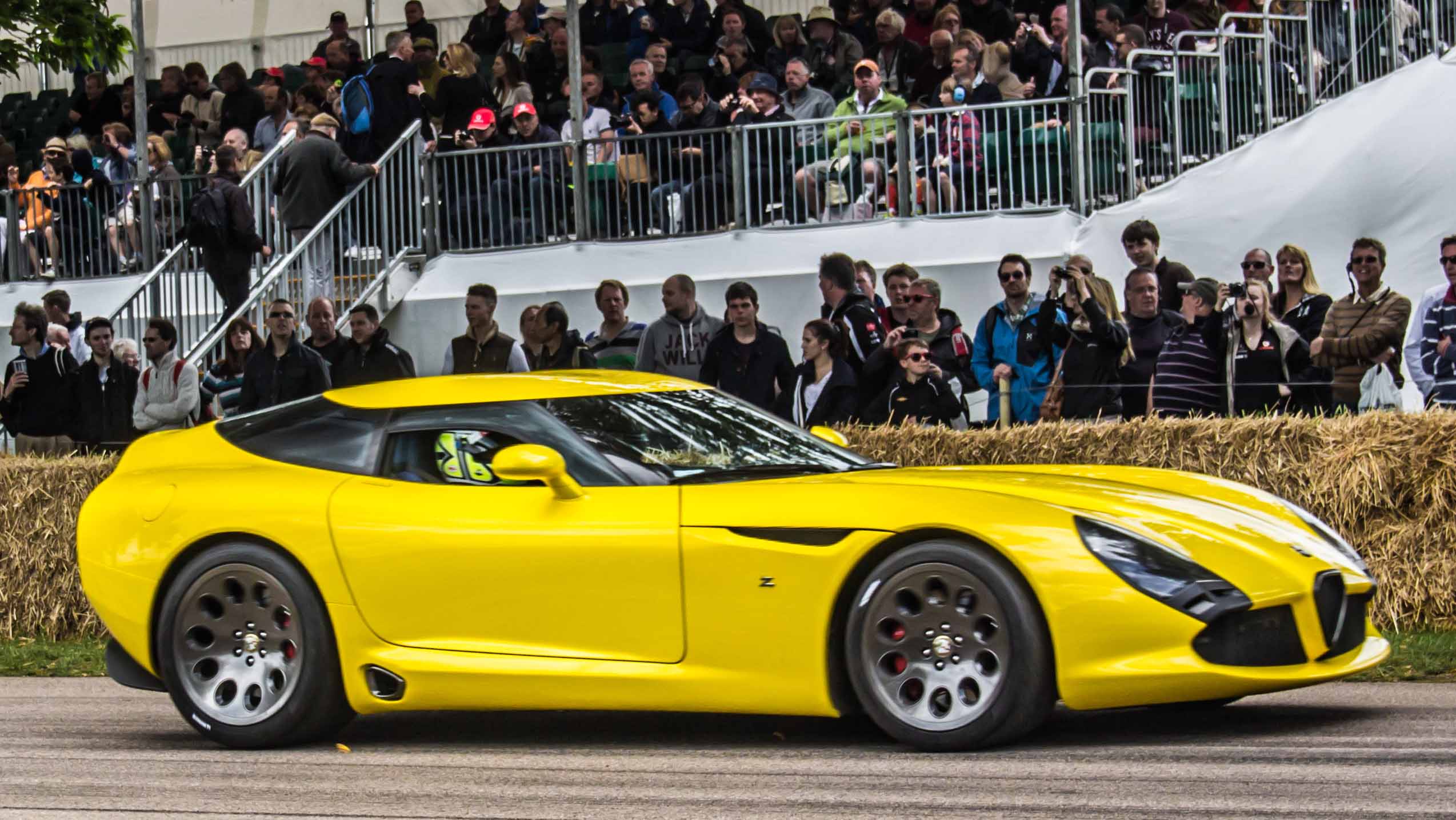 Ok, so this one isn’t a classic (yet) either but it’s one of the best. And maybe the best thing to come out of the Fiat-Chrysler merger. It’s the Zagato Alfa Romeo TZ3 Stradale. This one takes a coachwork body from Zagato, sanctioned by Alfa Romeo, but put on the chassis from a Viper. Not just any Viper. The ACR-X. That means an 8.4L V10 with 640 hp and 585 lb-ft of torque. Since this is a stunning car by Alfa standards, it is the best-looking Viper ever made. Even though it has the tail of a Shelby Daytona Coupe. It was based on the ACR-X, which was the race version of the Viper ACR, though this one was a street car. The Alfa Snake was built in 2010 to celebrate 100 years of Alfa Romeo and yes, the company actually built it. 10 of them, if you’re counting. 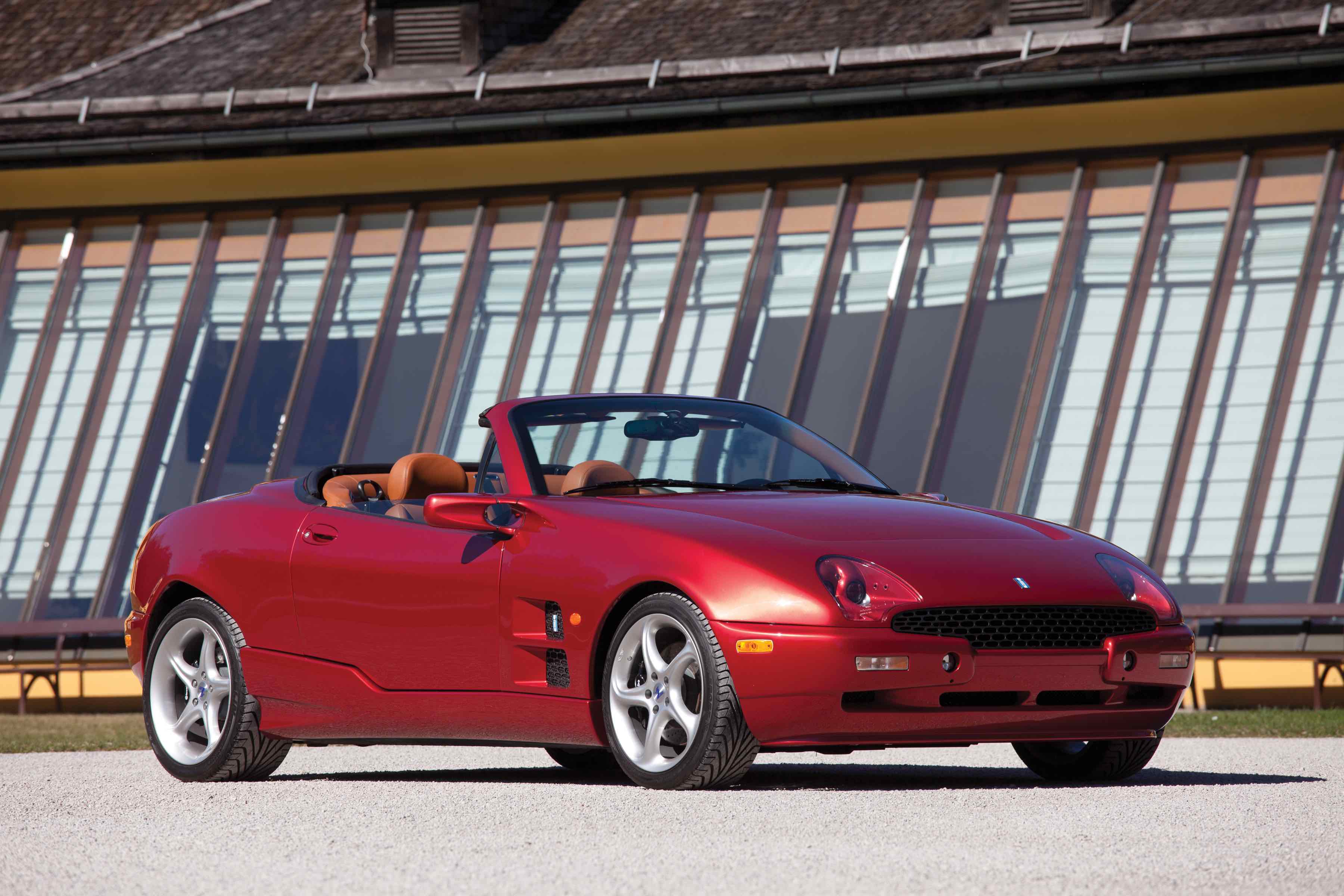 Finally, the most recent. And maybe the least Italian-sounding name. Bruce Qvale was an American car distributor. De Tomaso approached him in the late 1990s, needing funds to help bring his idea to restore the brand to market. Qvale ended up taking over and renaming the cars with his own badge.

The new Mangusta was designed by Gandini and assembled in Modena. It was a very strangely styled car, but under the hood lived a 4.6L DOHC Ford V8. Borrowed from the Mustang SVT Cobra and making 320 hp. Take a look in the cabin and you’ll see all sorts of other Mustang parts. Like switchgear and the instrument cluster.

Bonus Round: Cadillac Allante and Chrysler TC by Maserati 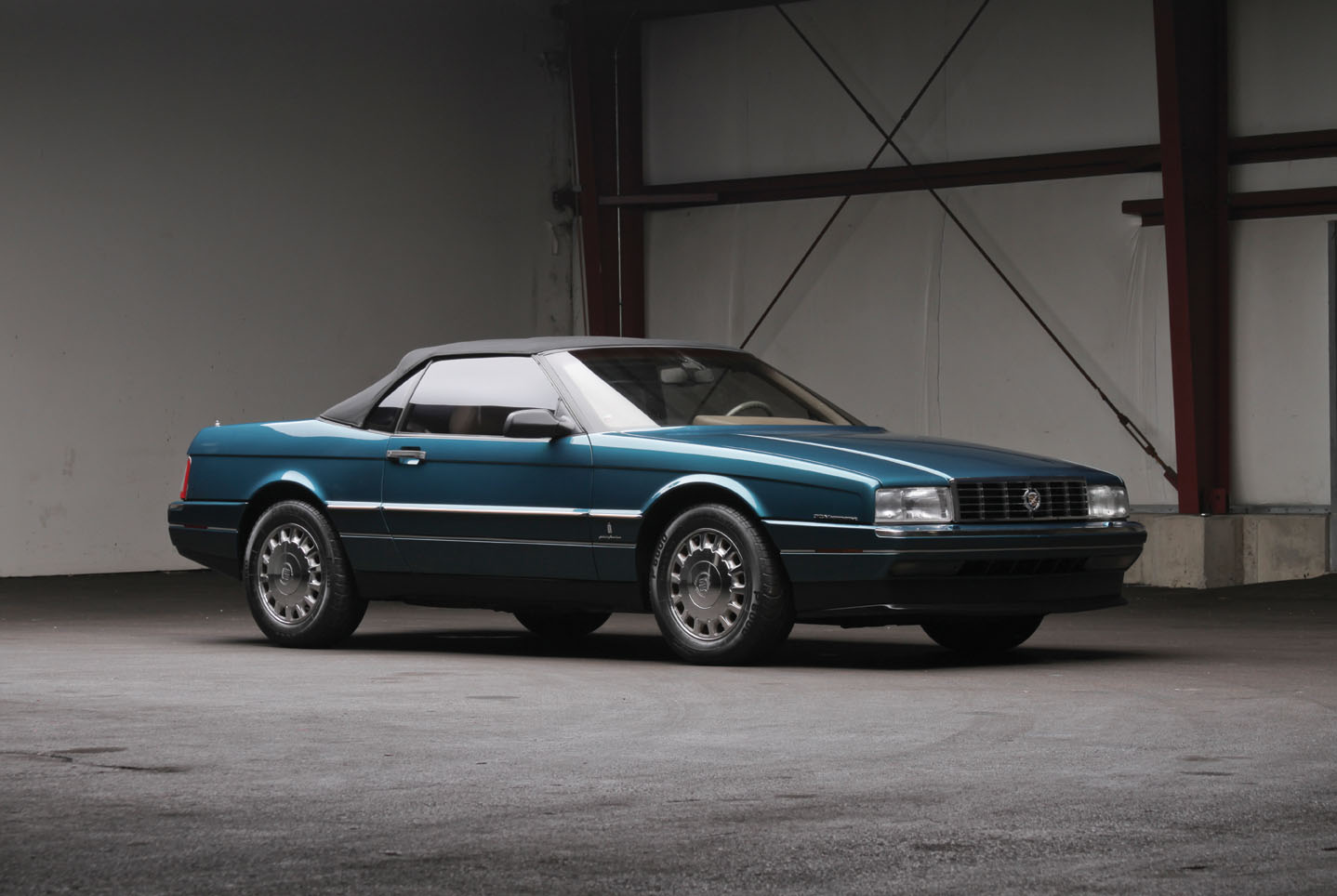 Cadillac had the bodies shipped via 747 from Turin, 56 at a time, delivered to the automaker’s Hamtramck Assembly facility. So it’s an American car, with an American V8, either a 4.1L, 4.5L, or a Northstar 4.6, with an Italian-built body that was finished off in Detroit. With what might be the most expensive assembly line of any car. It’s probably most famous for being dropped from a plane in that Charlie Sheen skydiving movie you don’t remember. 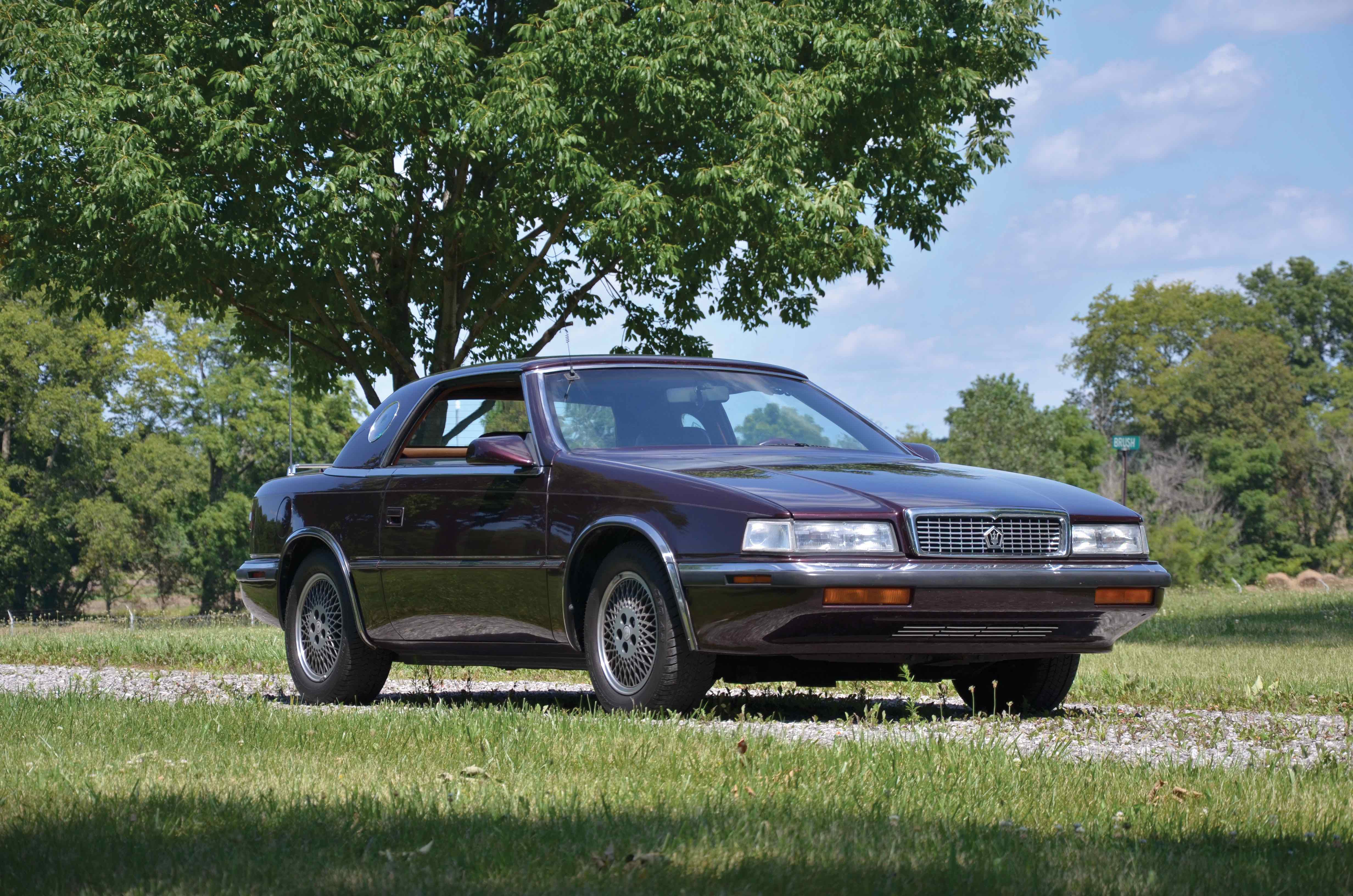 The Chrysler TC by Maserati was another American luxury tourer. Chrysler boss Lee Iacocca was friends with Alejandro De Tomaso, a frequent-offender name on this list. De Tomaso owned Maserati at the time. The two agreed to develop a grand tourer. It was based on the Dodge Daytona, which was itself a K platform derivative. So you might call this the nicest K-Car ever built.

The body was designed and built in Italy, on a Chrysler platform, with a choice of three engines. The first was a 2.2L four-cylinder turbo. Taken straight from the Chrysler catalogue, though at 160 hp it was slightly detuned. There was also a second engine, related to the that 2.2. But it was more international. The American Chrysler block was fitted with a Cosworth head and finished in Italy. We’ll still call it American, though. Oh, and that third engine was from Mitsubishi. But that doesn’t disqualify the car from the list.