The Greatest Racing Liveries of All Time

Sometimes racing liveries can even transcend the cars they adorn

In case you didn’t already know, Porsche won its class at Le Mans this year. It wasn’t an overall win – they scrapped their LMP program – but the GTE PRO class is a competitive one, and a win there is no easy task. More than just winning, Porsche finished 1-2, which is also good. What’s interesting, however, were the retro liveries they were wearing, chosen to honour Porsche’s 70th birthday: one was fairly recognizable, with its Rothman’s livery made so popular in the ‘80s where it adorned the all-conquering Porsche 956 and 962 racers. The other, less so: it was pink, and if you squinted, you could see strange German lettering splattered all over it, used to signify different cuts of pork. Why would they do that? Well, that and much more is explained in our list of the top racing liveries of all time. 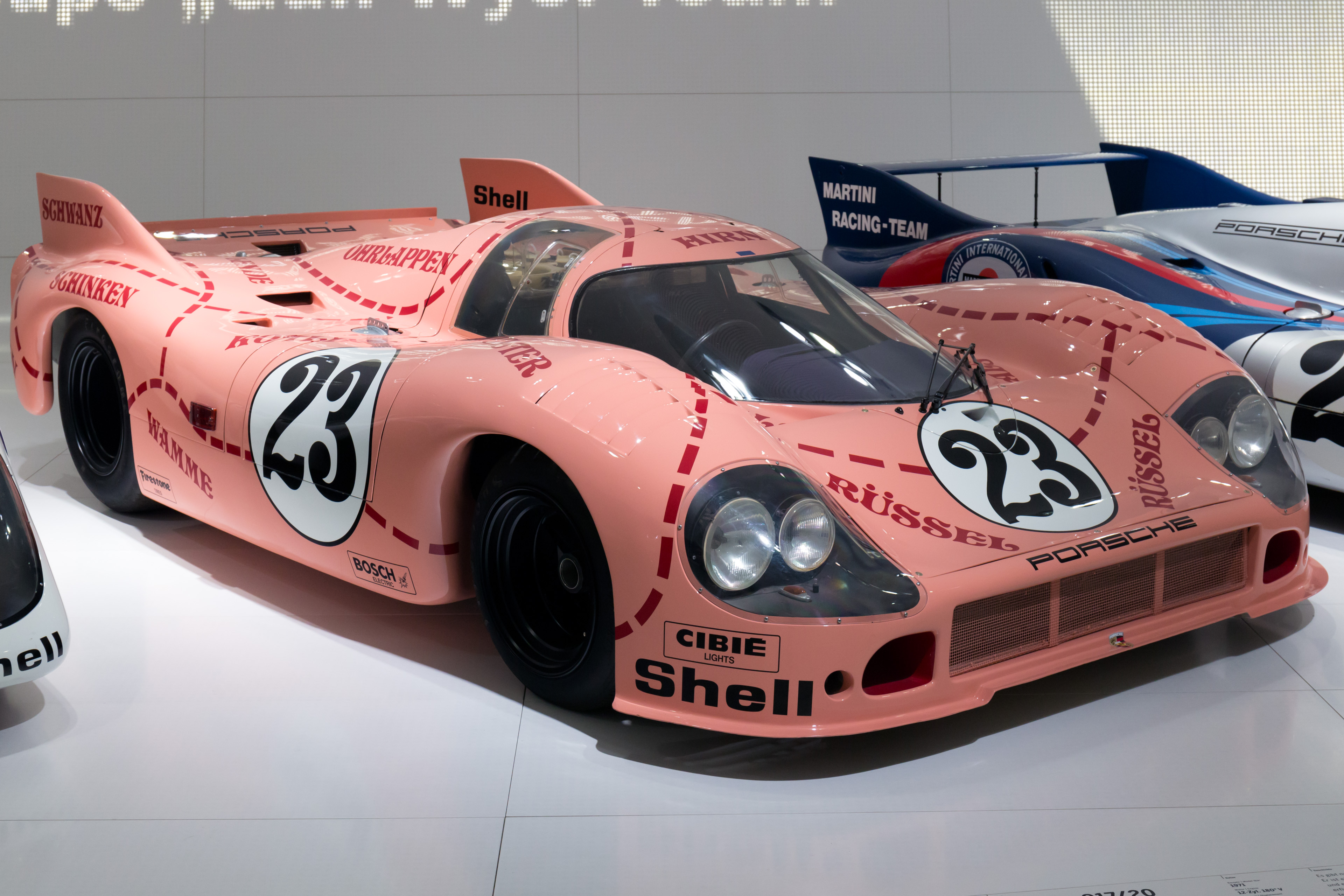 There were many much more successful 917 racers than this one, but this isn’t about how the cars did in their various races; it’s about how they looked while doing it. Basically, the “20” model was given all sorts of strange body mouldings to help improve its aero at Le Mans, though it made it tough to drive and it ended up crashing just a few laps in. The writing on the car? Cuts of pork, because the weird aero gave the 20 a somewhat fat and piggish appearance. 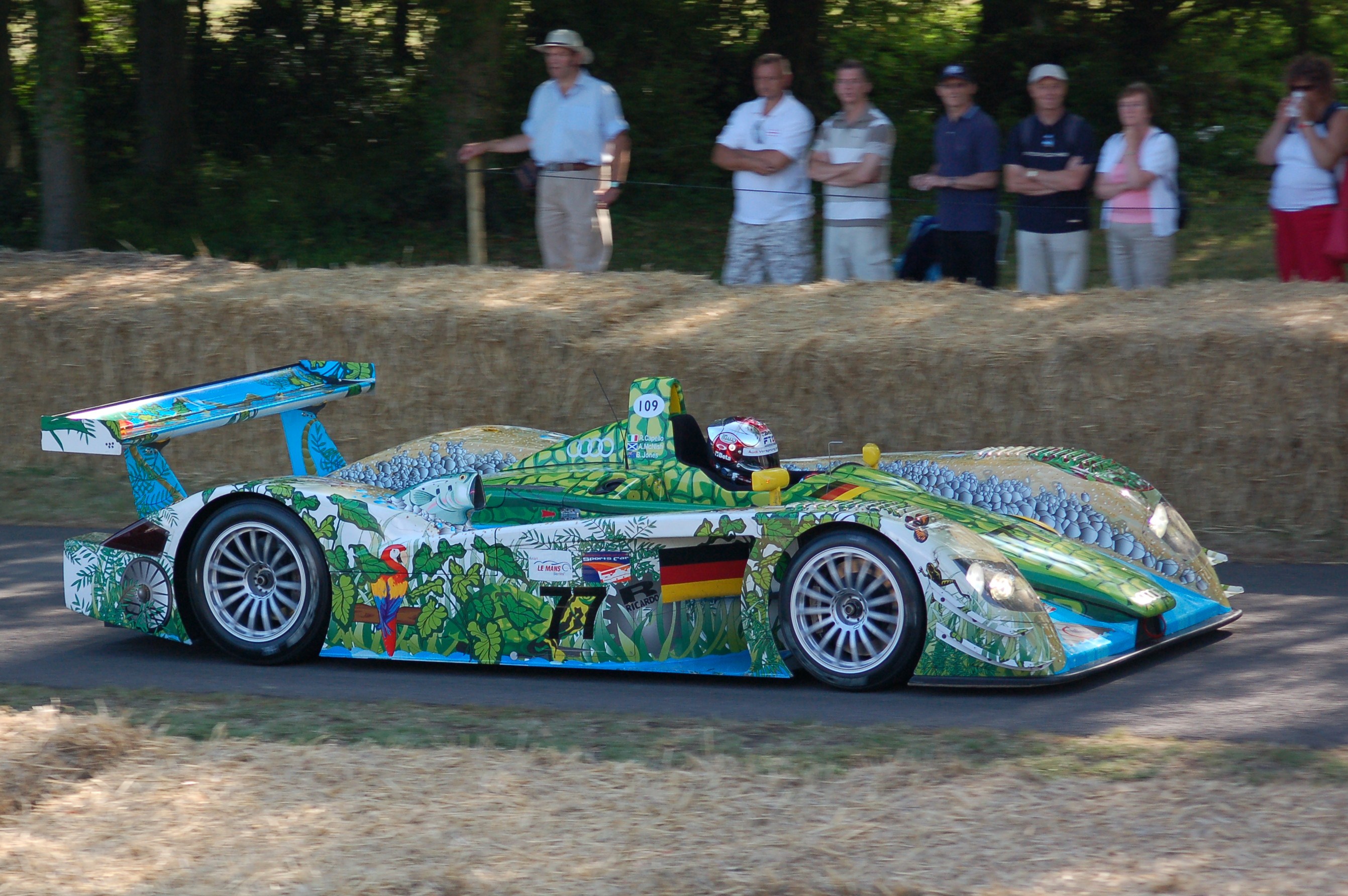 Keeping with the animal theme, we move three decades down the road and down under, where for the first time, the American Le Mans Series (or was that “Australian” Le Mans Series?) ran an event at Adelaide, in Oz. The crocodile paintjob recalled the wildlife in the area, as well as everyone’s favorite Ozzie export, one Crocodile Dundee. Unlike the Pink Pig, the Croc not only finished, but won. 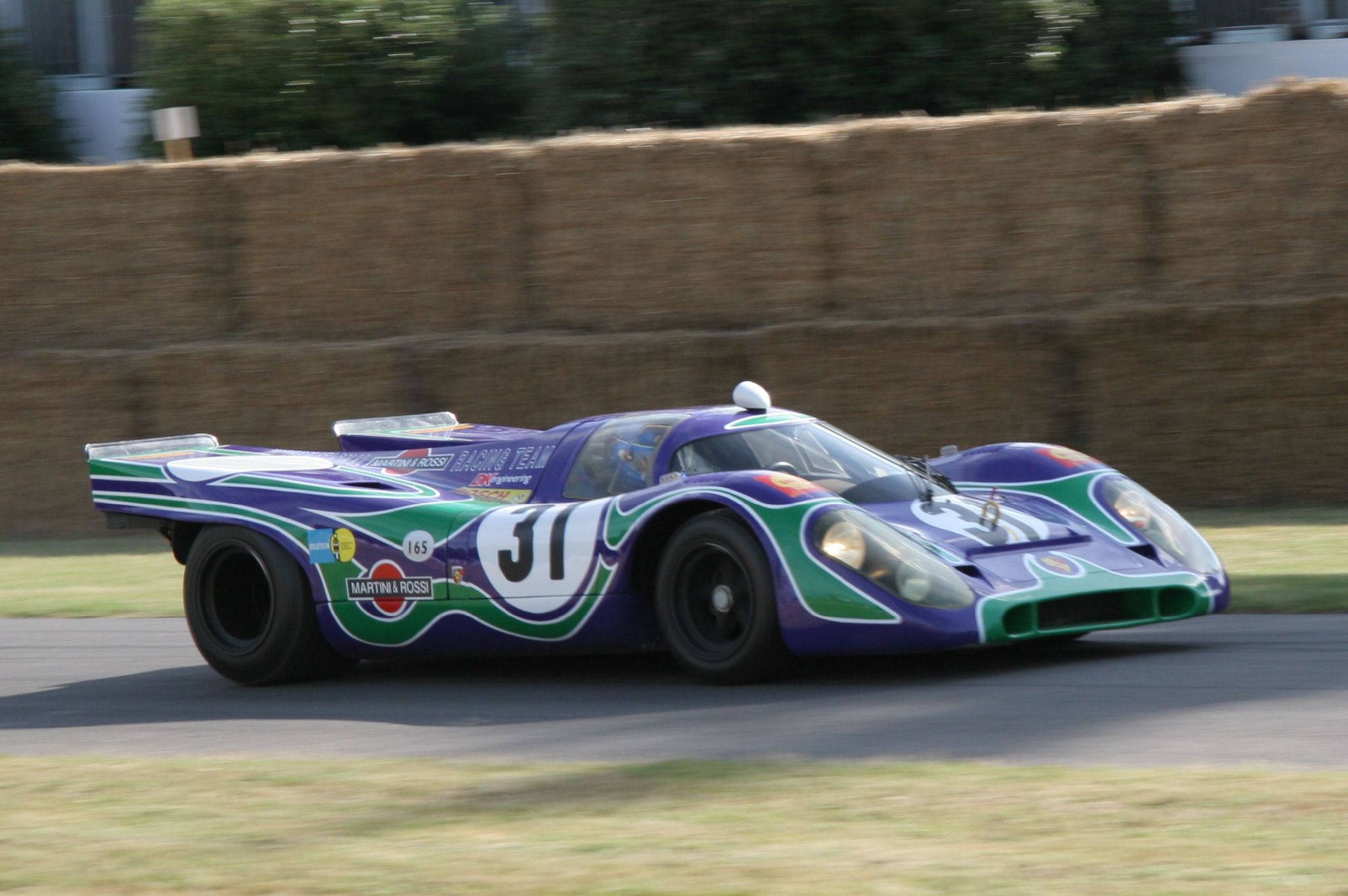 Hippies may be better associated with stuff like the VW Beetle or Bus, but it seems that even racing couldn’t ignore the free love movement of the ‘60s and ‘70s. To wit: the “Hippie” 917 LH. Painted first purple with green swirls, and subsequently red and yellow, these were two of the brightest-coloured cars to ever grace the track. 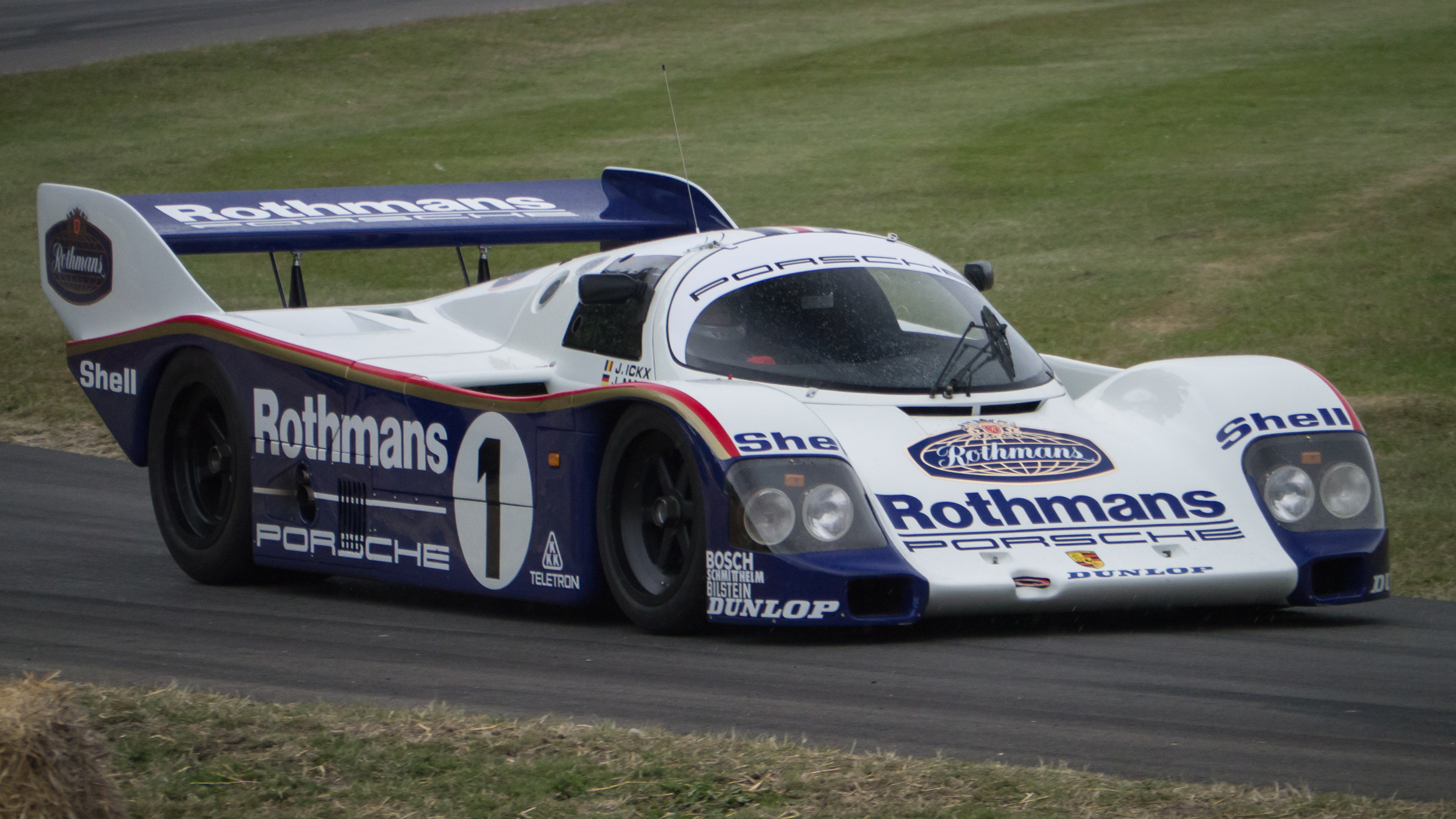 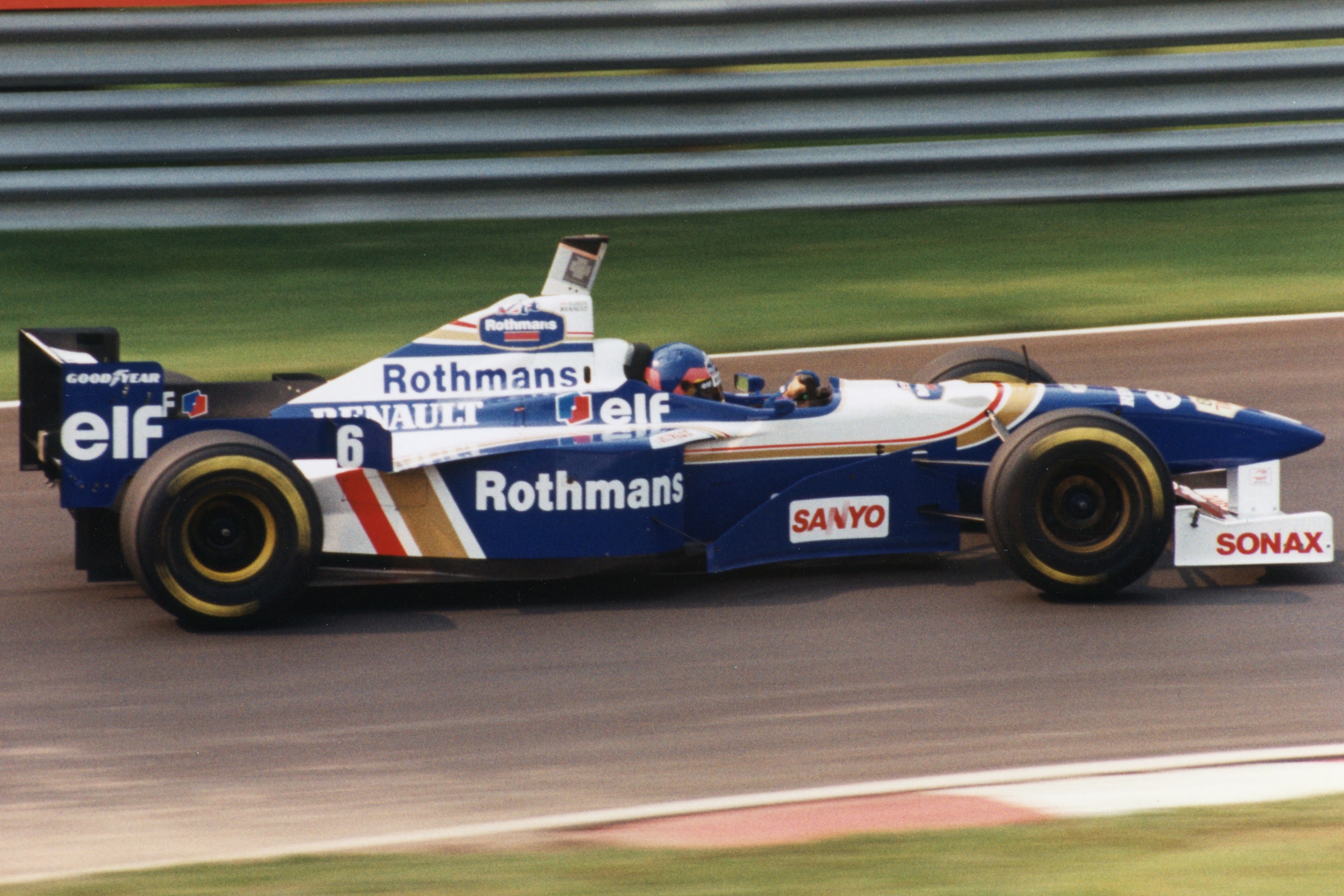 Porsche may have popularized the red, yellow and blue colours of the British cigarette company – they dressed up everything from 956s to 959s in the stuff – but it was also found on the likes of Ford rally cars, Williams F1 cars and Holden V8 supercars. 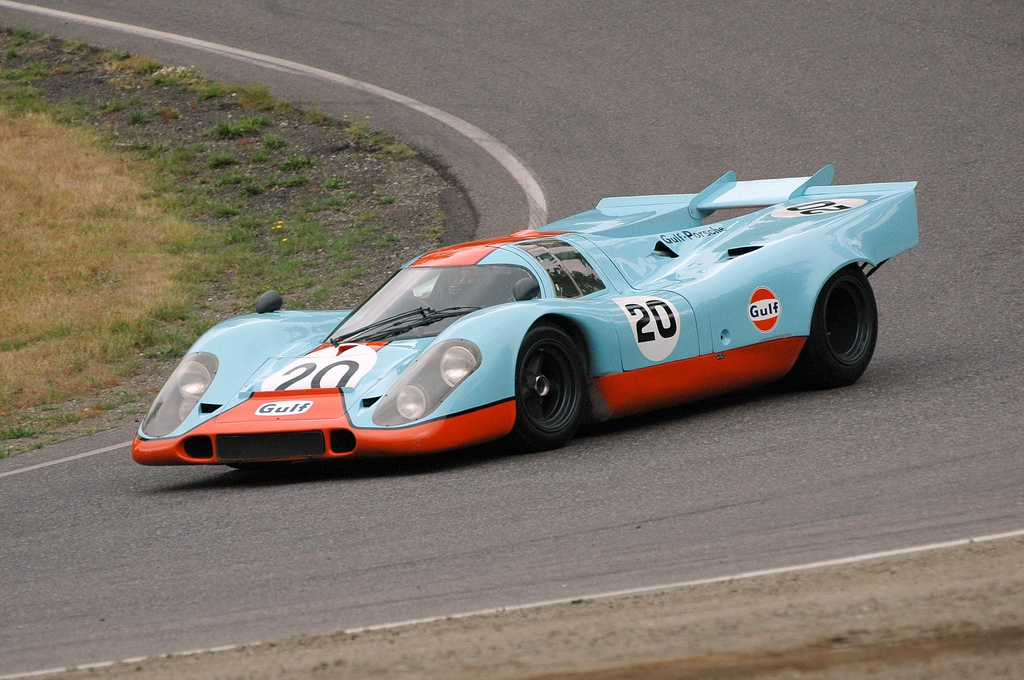 Once again a Porsche staple, this time immortalized on the silver screen in Steve McQueen’s Le Mans, the creamsicle orange/powder blue colours of the Gulf oil company have graced everything from that 917 (golly, that car’s made the rounds through the years), to the McLaren F1, Audi R8 and Aston Martin DBR9. The colour combo has been popularized to the point where you can buy jackets, belt buckles, umbrellas and books emblazed with that legendary logo. 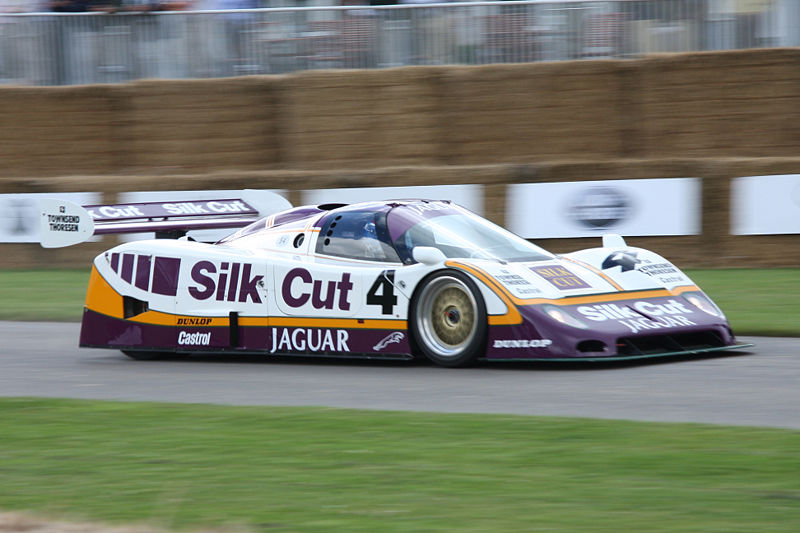 The covered rear wheels were cool, the sound from the seven litre V12 was glorious and the top spot on the Le Mans podium ain’t bad, but it was the purple, gold and white paintjob of yet another British tobacco company that people are going to remember. 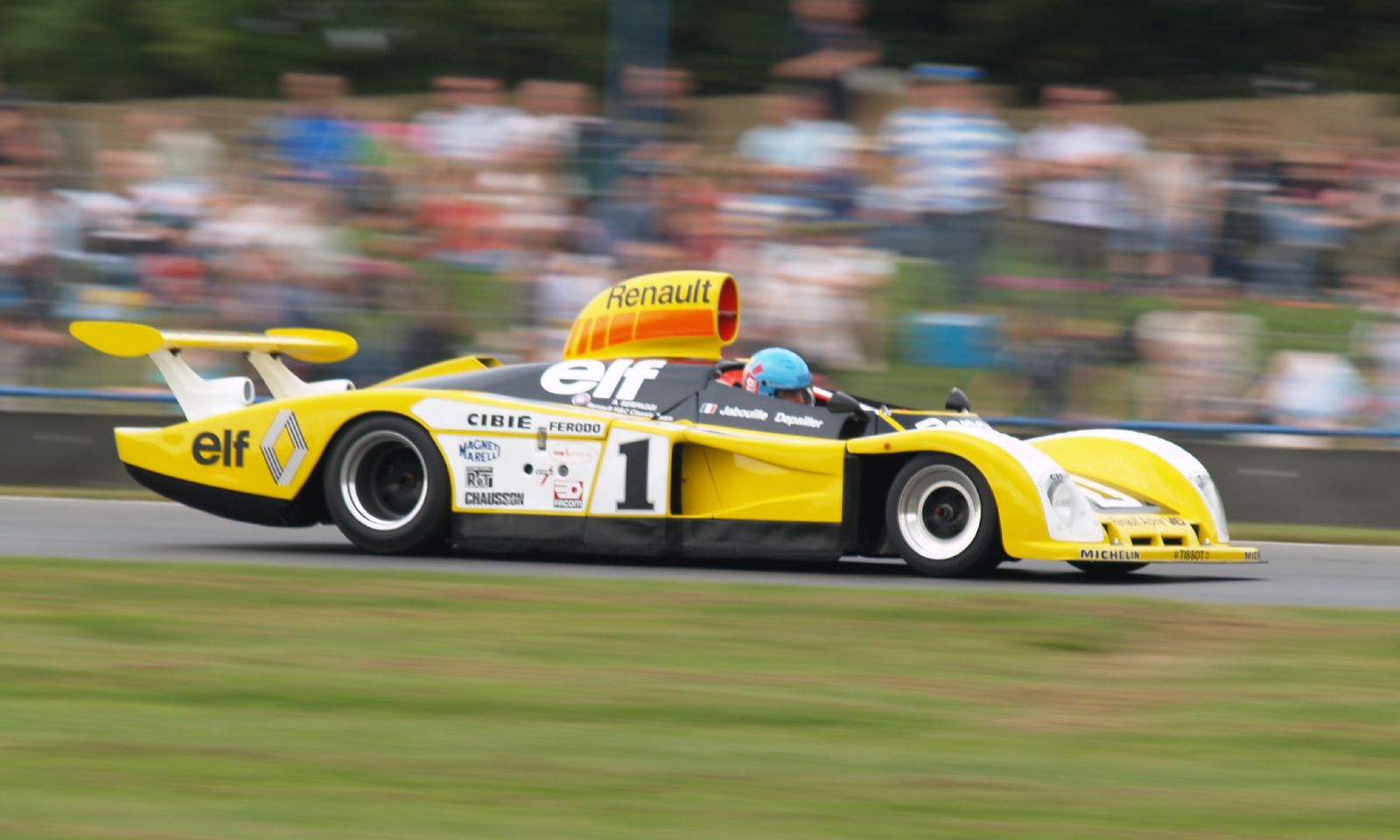 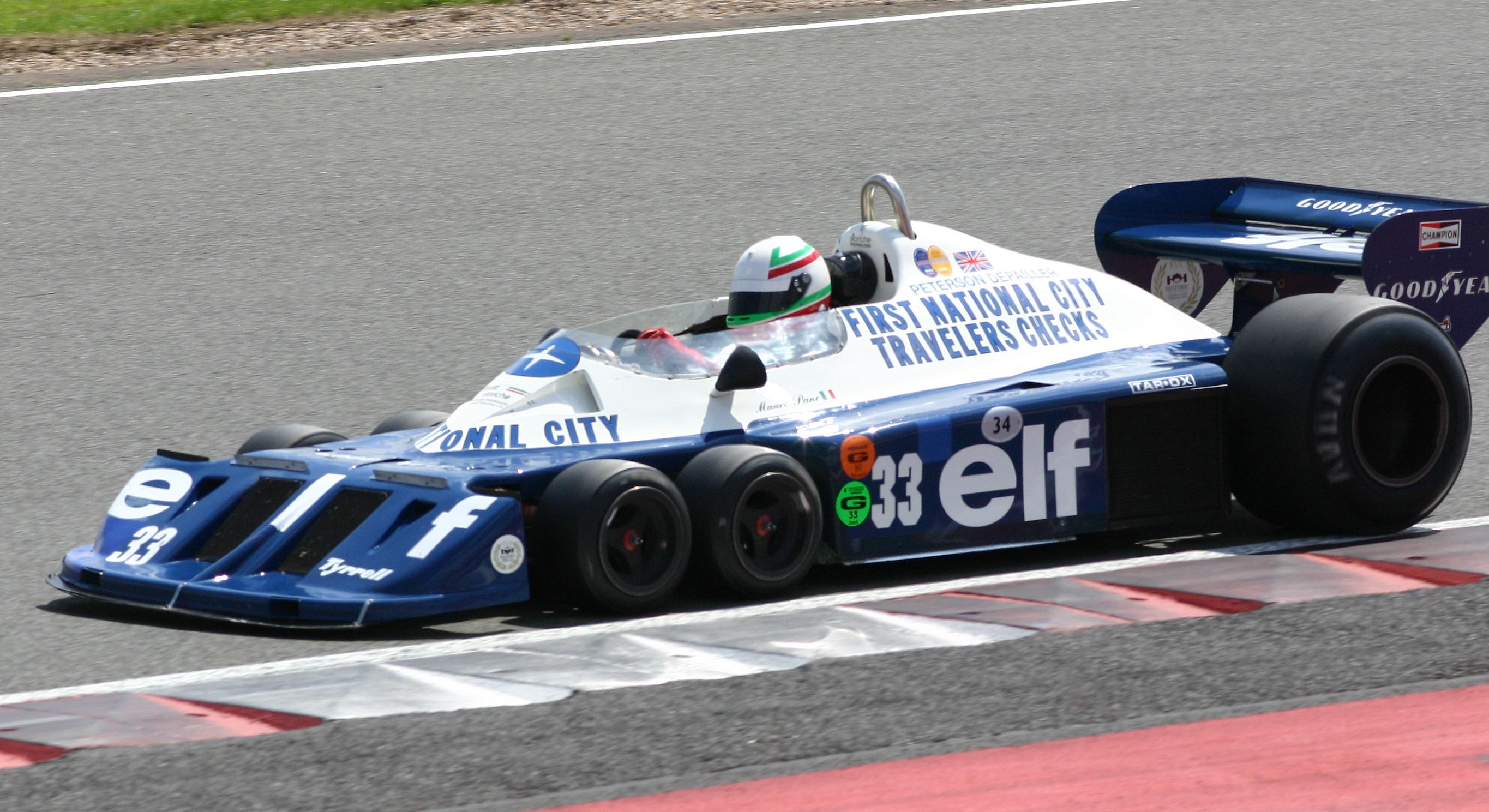 Hard to decide which sled that wore the gold, white, and black of the French oil company is the most famous: the Renault R5 Turbo Rally car? The Alpine A442 or any number of Renault-powered F1 cars? Leave out the gold/white/black colour combo, and Elf itself has appeared on some pretty out-there stuff, including the wacky Tyrell P34 six-wheel racer. 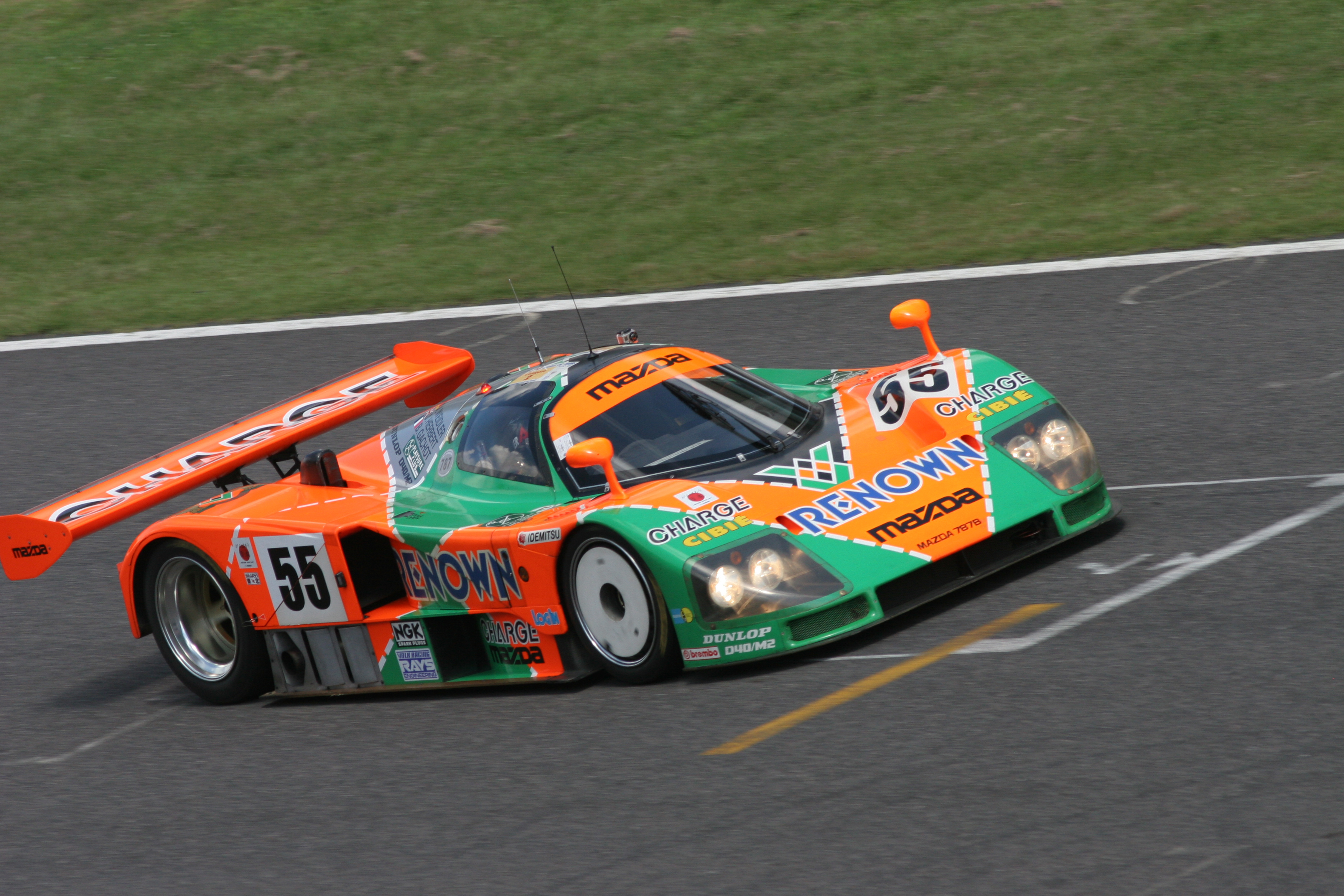 Well, if your car’s as loud as the Mazda 787B was, you’d better have the colours to back it up. With that in mind, Mazda turned to Japanese textile manufacturer Renown, whose orange-and-green argyle pattern will go down as possibly the loudest livery ever to win at Le Mans. 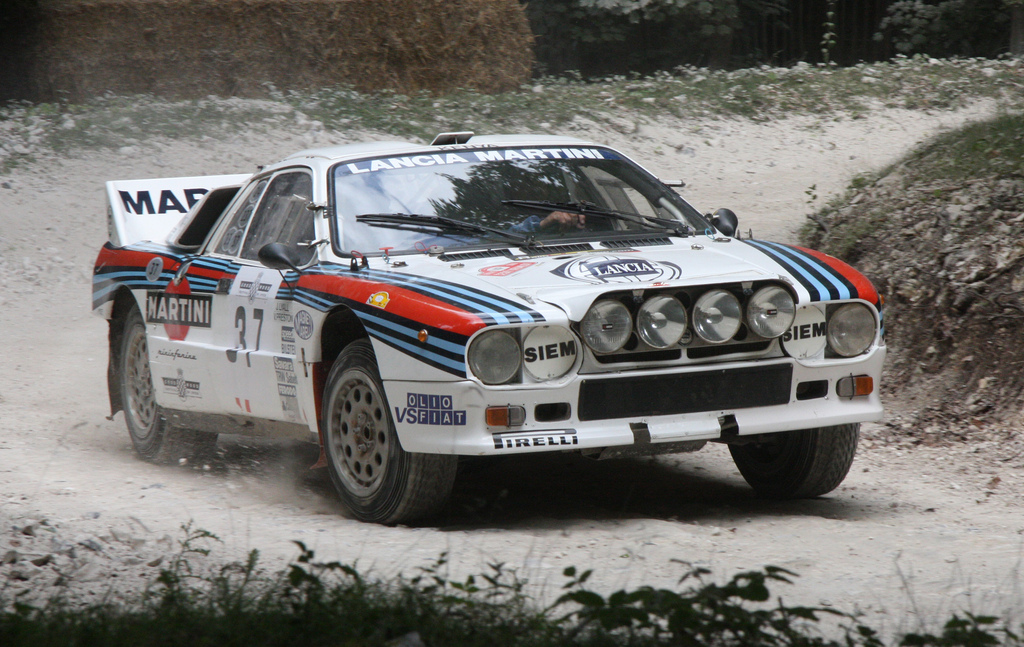 Like Gulf, the blue, white and red Martini striping has appeared on a vast number of racecars. Unlike Gulf, however, Martini is equally known for sponsoring rally cars – specifically, Lancias – as it is sports cars like the 917 (of course!), Porsche 936 and most recently, the Williams F1 team with Canadian driver Lance Stroll at the helm. 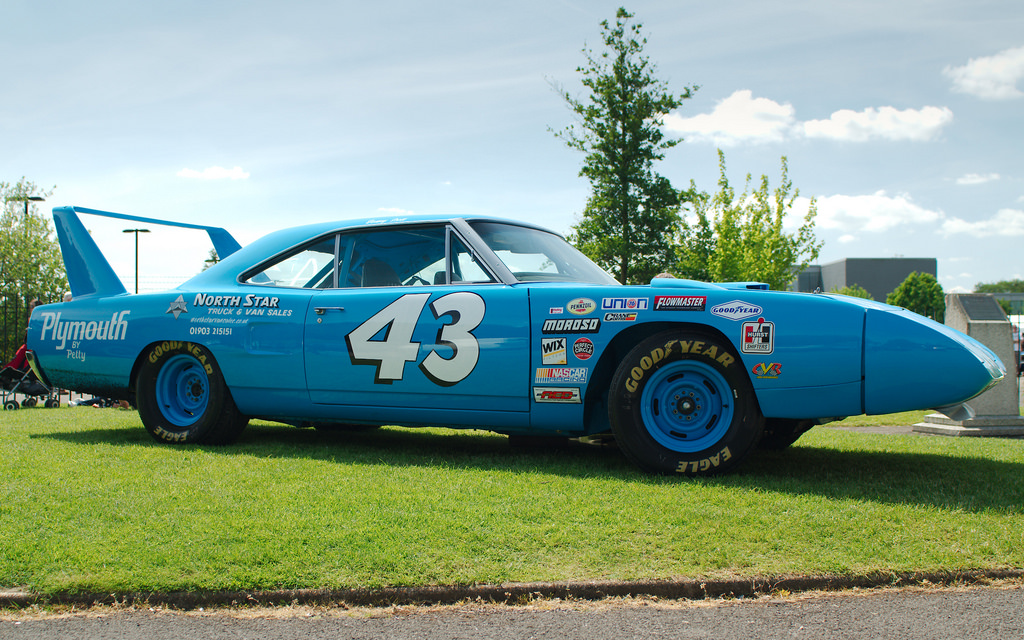 While The King’s most recognized ride – by race fans and Pixar’s Cars fans alike — is probably the Plymouth Superbird he piloted in 1970, Petty has commandeered a number of vehicles, including the Plymouth GTX, Road Runner and Ford Torino Talladega. The one thing these all had in common? The simple but oh-so-recognizable baby blue and white paintjob. 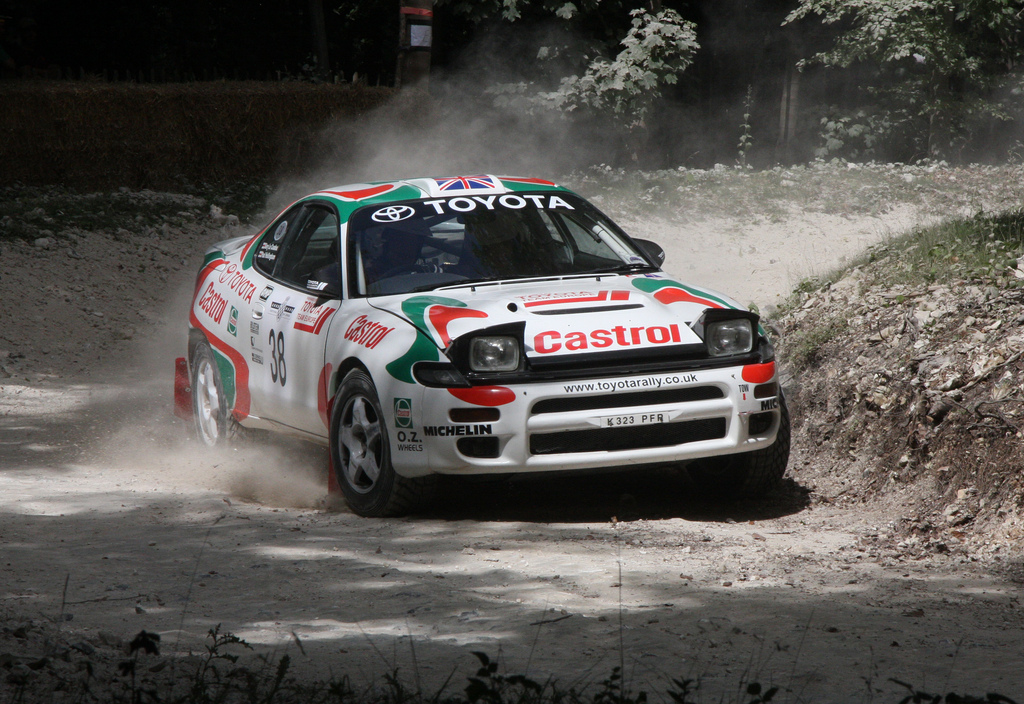 While the white, green and red of one of the world’s oldest lubricant companies has appeared in a number of series that range from the Japanese Super GT Championship to the British Touring Car Championship, it’s likely best recognized when covered in mud, snow and other grime. That’s because it’s been a staple on the World Rally Stage for decades, draped over the likes of the Toyota Corolla, Celica, Hyundai Accent and Ford Focus rally cars. It was Castrol that was draped over Carlos Sainz’s stricken Corolla, halted 500m before the finish line – and the world championship – at the ’97 Rally Great Britain…because he was out of gas. A car sponsored by an oil company…frozen in the middle of the road, with an empty tank. Oh, the irony. 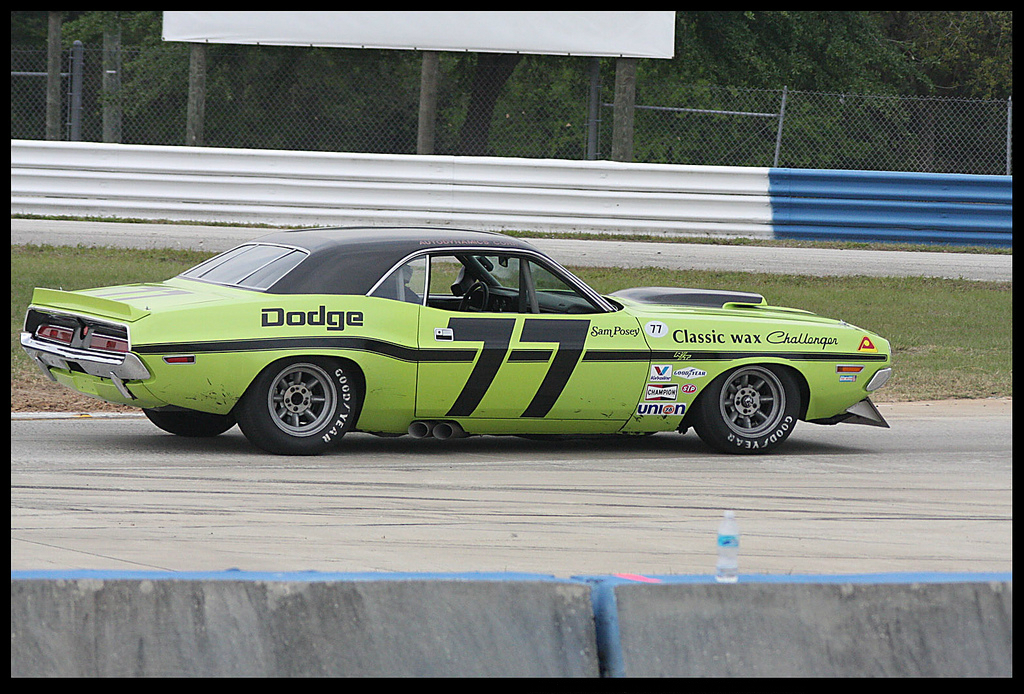 Not sure if this Trans-Am competitor is better known for the bright green paintjob or the huge “cow-catcher” front splitter, but either way: it was the most eye-catching entry on the loud n’ proud early ‘70s Trans-Am circuit. Who knew car wax could look so cool?

There’s just something about British cigarette companies and good-looking race cars, eh? Of the number of these on the list, the black and gold JPS F1 cars – usually Lotuses driven by the likes of Mario Andretti, Nigel Mansell and Graham Hill, among others – are probably the classiest. You can count on one hand the number of F1 cars with a black colour base you’ve seen on the circuit – it doesn’t tend to be the most eye-catching, sponsor-friendly colour and it gets hot – but somehow, some way the mostly black JPS cars are some of the best-looking F1 cars…ever. 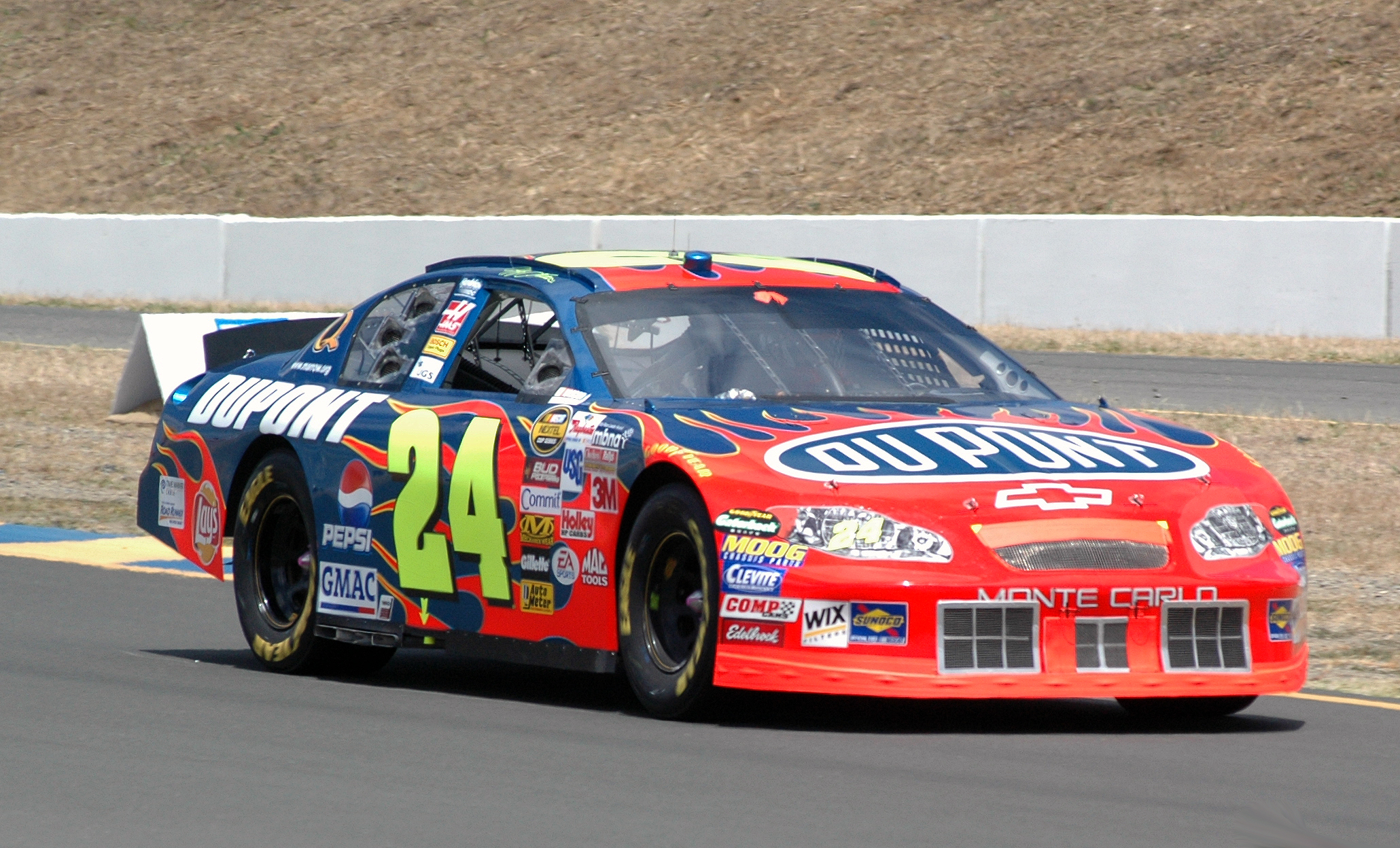 From basic black cars we turn to this: possibly the brightest car on this list, and rightly so: after all, when you’re sponsored by a paint company, you’re going to be colourful, right? It helped that Gordon was one of the most dominant drivers of his era, and managed to transcend the typical good ol’ boy NASCAR image by appearing in movies and even rap songs. 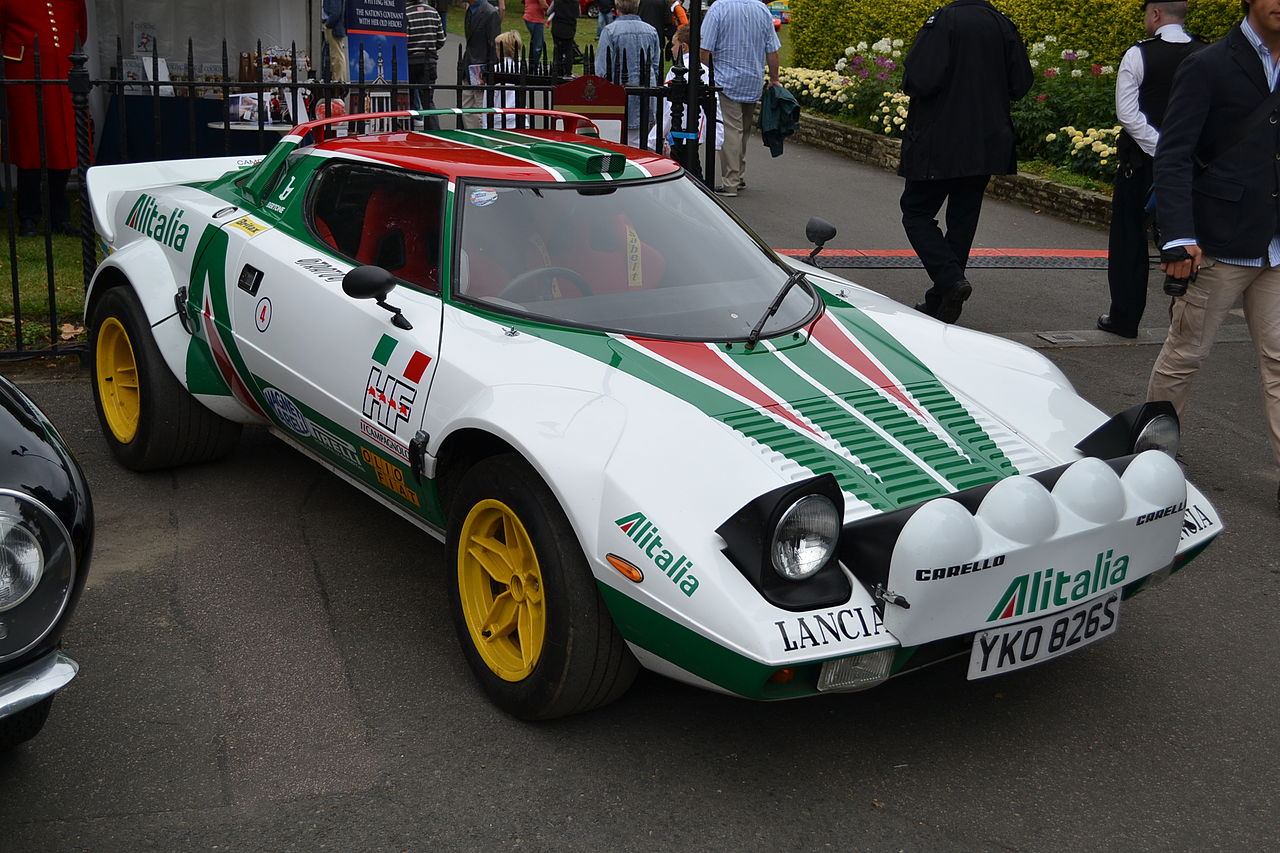 It may have appeared on other cars, but none of them ever wore Italy’s national airline colours like Sandro Munari’s Lancia Stratos HF. Somehow, they managed to get the airline’s tail art to fit perfectly onto the ultra-tight canvas that is the Stratos’ body, and it looks glorious. 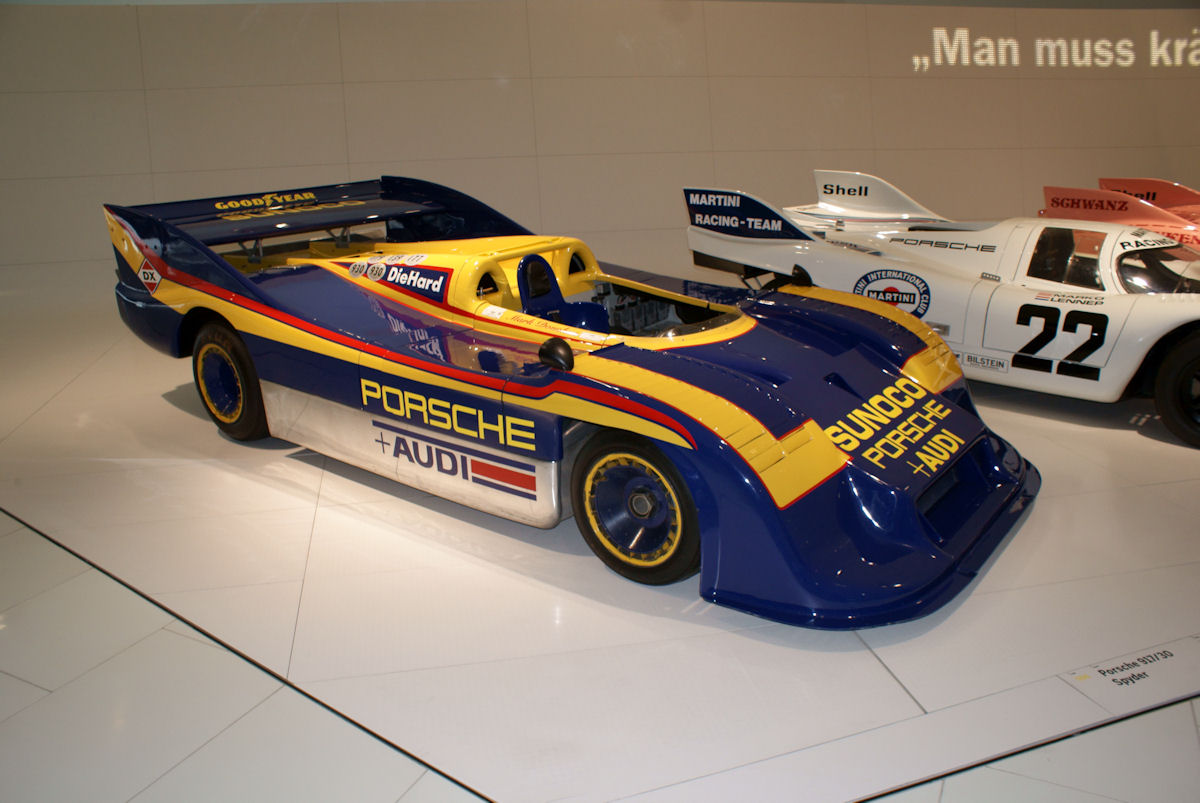 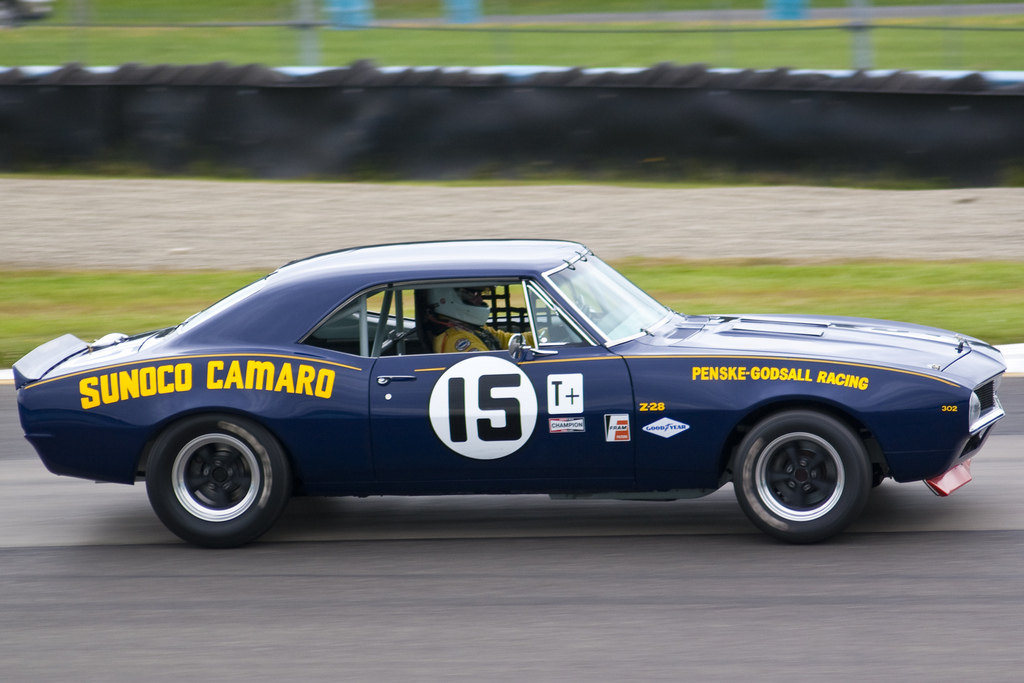 What’s so crazy about the blue and gold Sunoco ‘do is how its two most famous applications are on such divergent cars – the bonkers (wait for it) Porsche 917/30 Can-Am car, and the Camaro Trans-Am car – yet both are run by the same guy, Roger Penske. It also appeared on the sexy body of the Lola T70 – the man loved his racing. 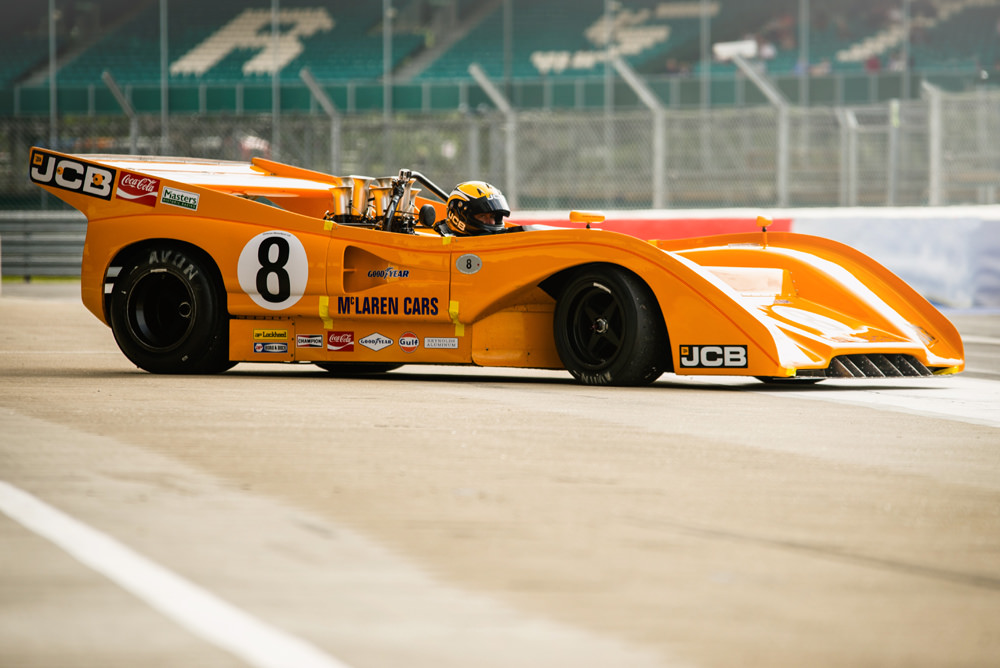 Gulf may have had blue and orange, but these babies were all orange, all the time. So bright you could probably see them from space, they dominated the Can-Am circuit in 1967-69, winning 20 of 32 races over that span, including all 11 in ‘69. 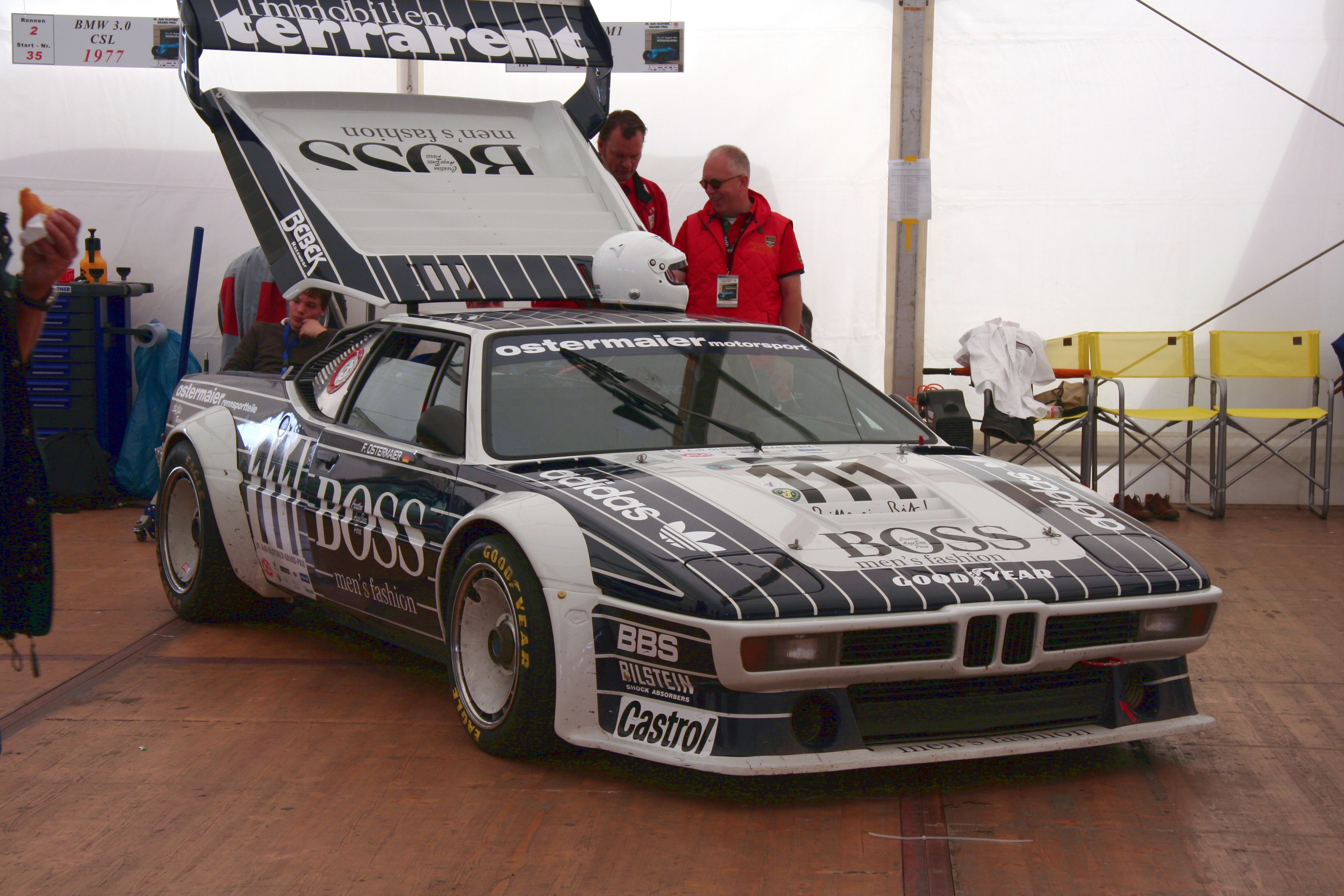 You could probably make a whole list of the M1 – when you run a single-make series, there tends to be a lot of sponsorship variety – but we’re choosing the white/navy Boss cars as they represent such a great confluence of two storied German brands: Hugo Boss and BMW. You can bet the drivers that drove the Boss car were the best dressed, too.

Red Bull All the Things 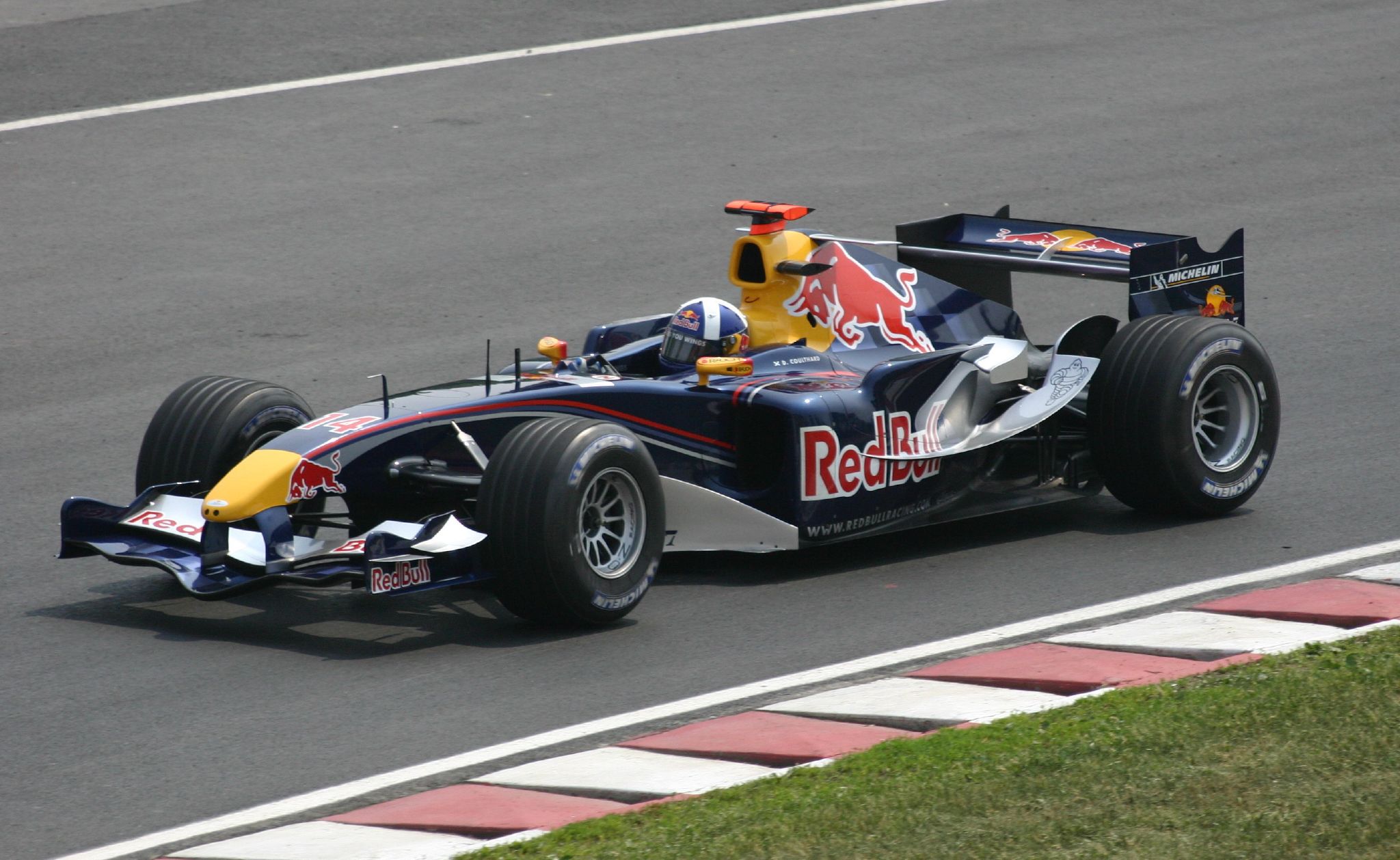 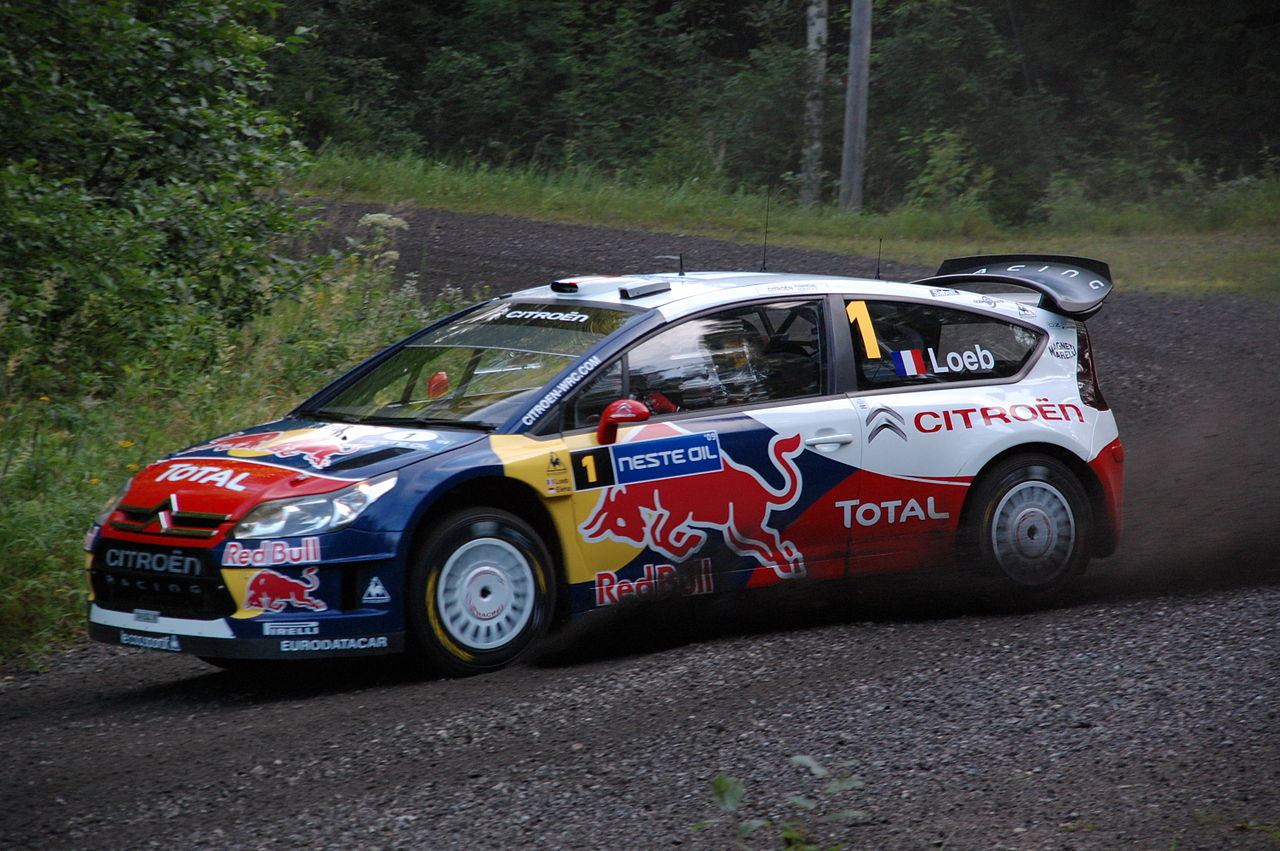 Forget Gulf, Martini and Rothman’s; when it comes to sheer variety of the cars (and boats, and planes, and bikes, and…) that have been graced by the blue and silver of a sugary energy drink brand, no-one comes close to Red Bull. The brand became so recognizable, that at one point that there were actually two teams competing in the F1 Championship that flaunted the colours of a company that was actually started by a guy in Thailand. Sort of. Oh, there’s a racetrack named after it, too.

It simply doesn’t get much more all-worldly than this. Painted over the Ferraris and McLarens driven by arguably the two best F1 drivers ever – Michael Schumacher and Ayrton Senna – the red and white of the American tobacco house will forever be tattooed on the minds of race fans. Even when the “Marlboro” script had to be turned into a bar code after cigarette sponsorship was banned from racing in 2001, everyone knew it was Marlboro.