And 5 advantages the Wrangler has over the Bronco.

Before we get into the meat of this comparison, know that as obviously similar as these two vehicles are – Dana axles, big tires, convertible roofs, manual or automatic transmission options, barn door-style tailgates, retro styling –  they’re also oddly different in a number of ways.

Of course, even if a vehicle is competing in a segment as slim pickings as this is – there are about five vehicles to choose from, including these two – you still have to stand out, and indeed have to. When we’re talking about “halo”-type vehicles such as these, it’s the unique attributes that garner the most interest.

We’ll start with the Ford because after all, it is the new kid on the block (as much as it looks like and traces its roots back to a much older kid on the block) and will have to prove itself against the Wrangler, which has somehow managed to pull off the feat of being both the most cultish of classics and an ultra-popular model for Jeep on the sales front. 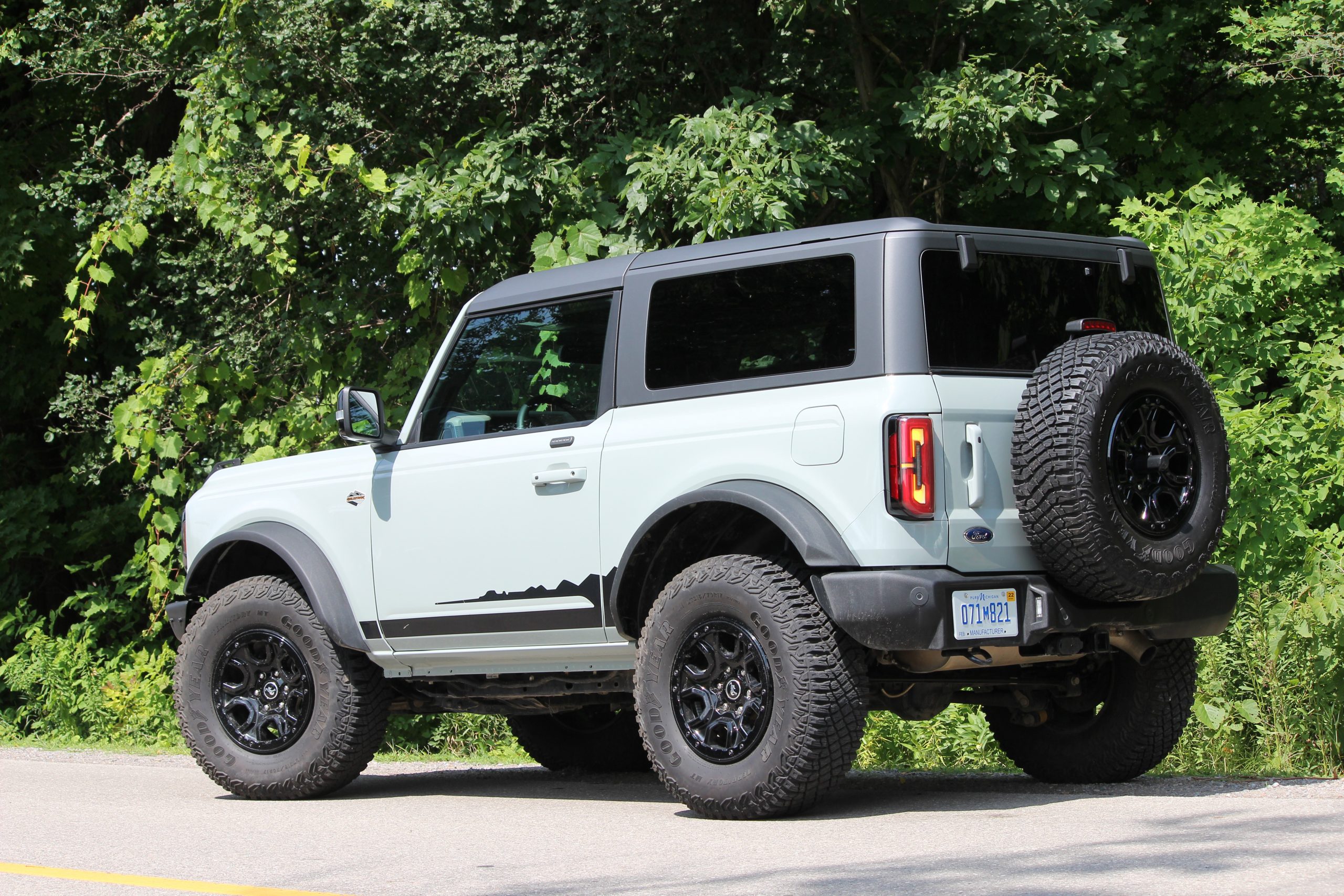 If the Bronco was going to go bumper-to-bumper with the Wrangler, its ability to outdo the Jeep on the road would be a huge advantage.

After all, the Wrangler has never been considered the most smooth-riding (not by a long shot) or efficient vehicle, and the way pretty much every sound gets into the cockpit can get grating if you’re not in the right headspace.

Sure enough, the Bronco is the more comfortable vehicle on the road. It’s got an independent front suspension and a multi-link solid rear axle to the Wrangler’s solid front and rear trailing-arm set-up and is just softer overall. Plus, even though owners can peel off pretty much any panel, you don’t feel that here as much as you do in the Jeep.

Things get a little dicier with the short-wheelbase version as it is bouncier and more Wrangler-like than the four-door, but it still represents an improvement over the Wrangler, especially in the latter’s two-door form.

We’re talking almost apples to oranges here. The Jeep’s upright, analogue gauged, switchgear everywhere treatment will appeal to fans of simpler times but there are many sharp corners. the controls for your locker and other off-road controls are tough to reach and there’s plastic abounds. 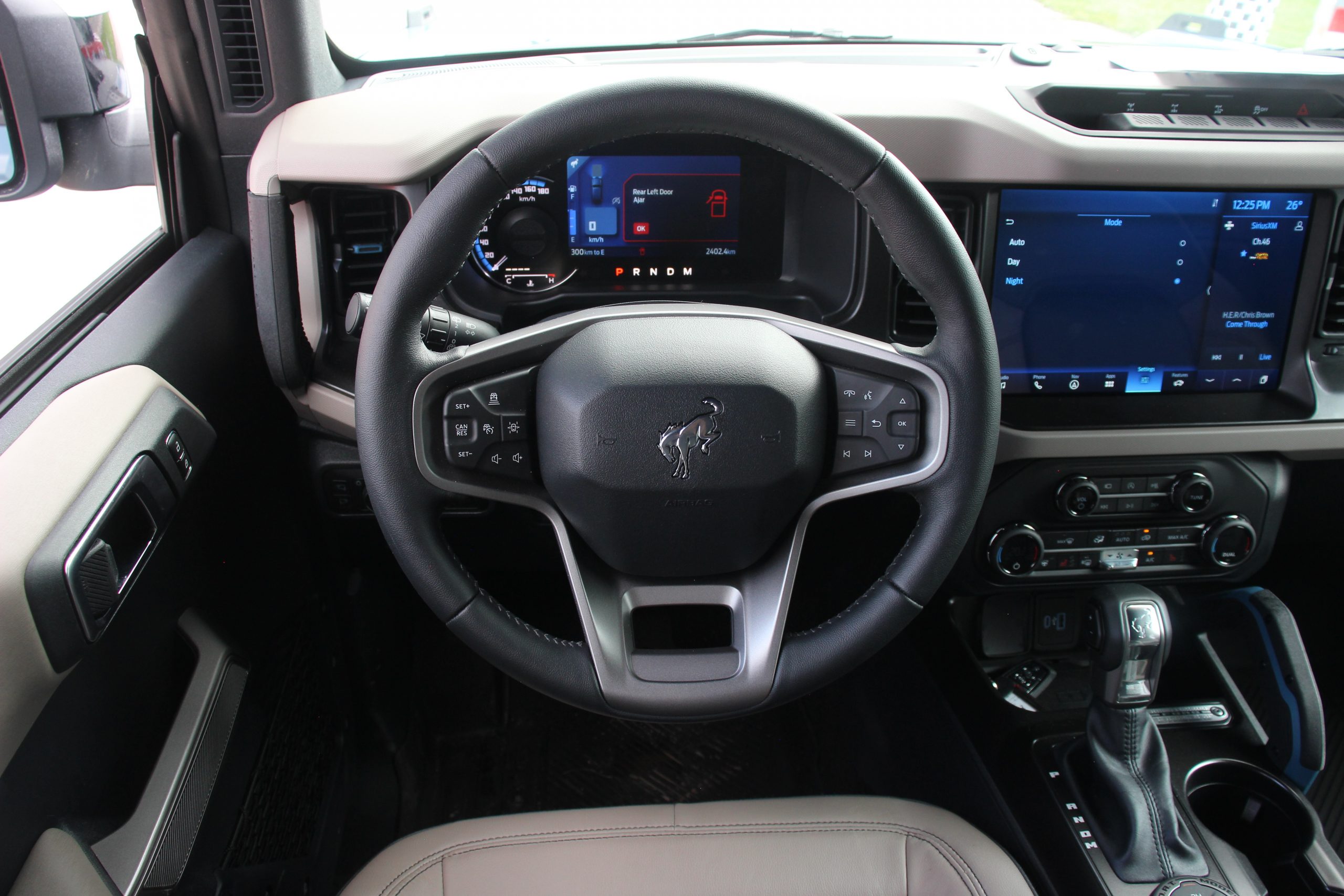 It abounds in the Bronco, too – these are off-roaders first-and-foremost, and few will care or have a need for Nappa leather and suede — but it’s softer and easier on the eyes, most of your off-roading controls are nicely aligned and easy to reach and it feels roomier overall, especially in the back seat of the two-door version.

Inside the Bronco, we find all manner of tech including an optional 12-inch screen that’s bigger than anything offered on the Wrangler, a forward-and-down-facing camera that activates soon as you select 4 low or the Rock Crawl, Mud/Rut or Baja drive modes (there are no drive modes to speak of on the Wrangler), faster-than-ever SYNC infotainment and a digital gauge cluster. 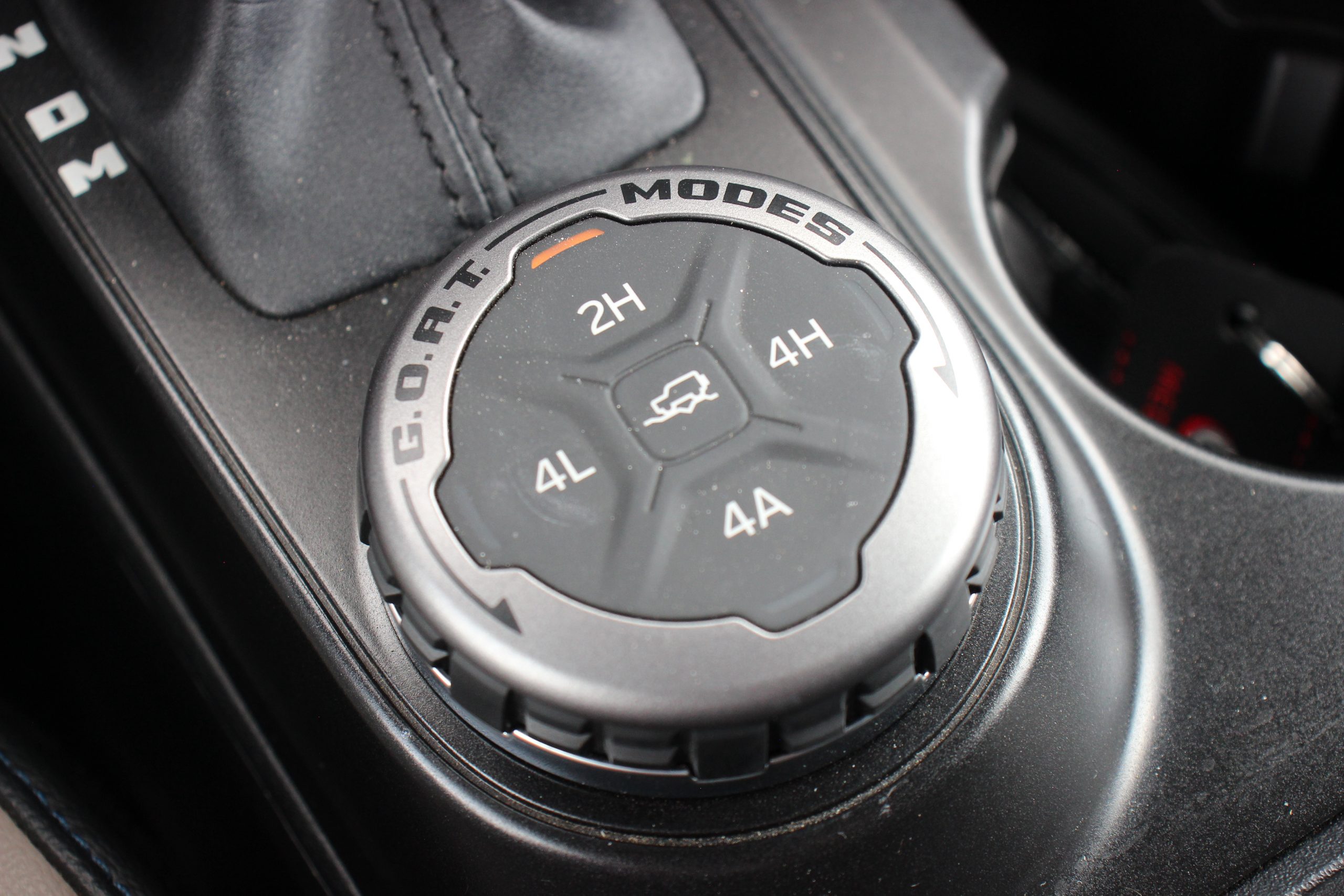 Add mechanical features such as the Bronco’s ability to brake the inside rear wheel during slow turns to decrease the turning radius and its cruise control-based Trail Control system, and you have a bonafide off-roader that hasn’t forgotten that we’re here in the 21st century.

Bit of an asterisk here because as we’ll see in a moment, the Wrangler’s 4xe option gains it back some valuable points in this department. 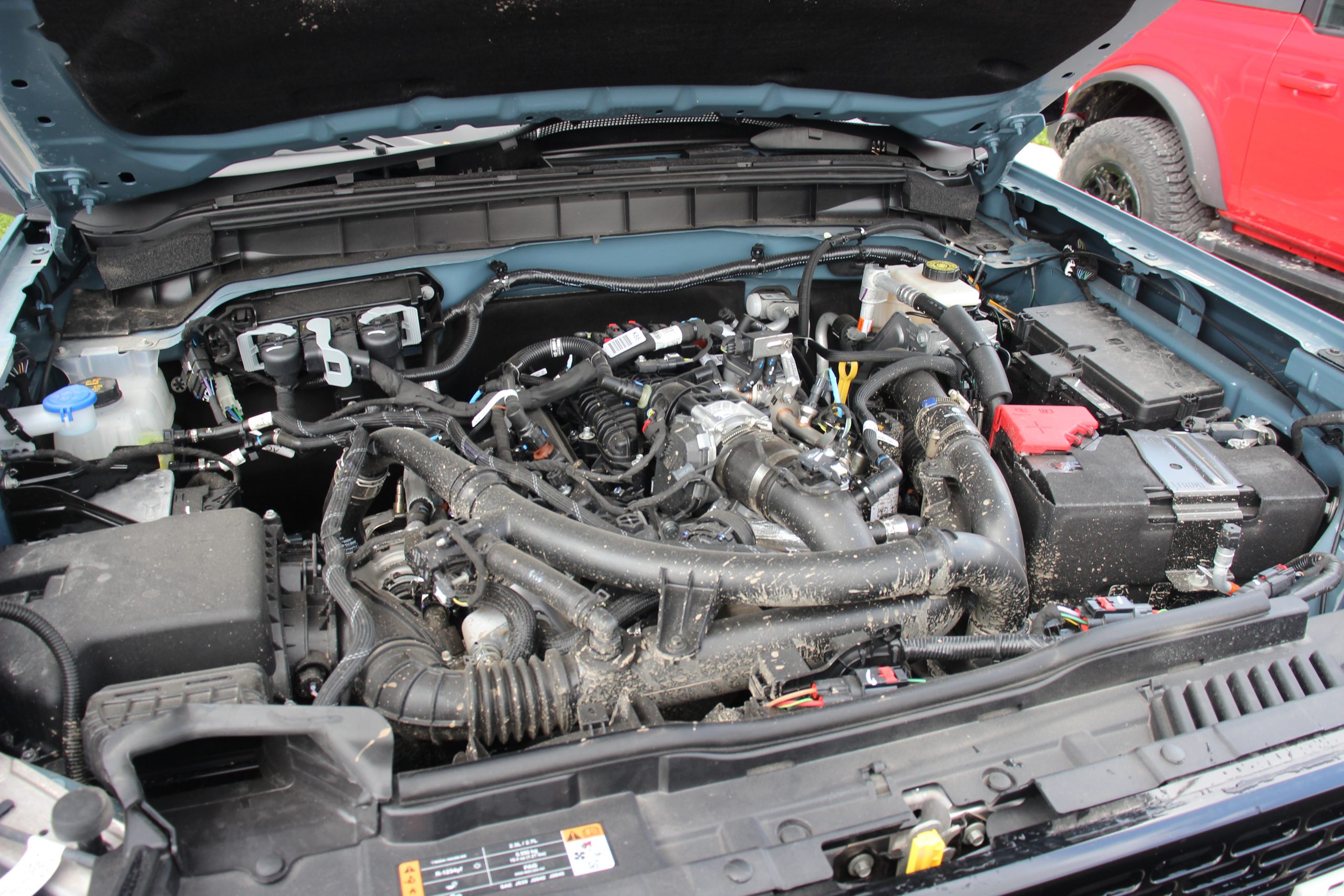 When we’re talking traditional internal combustion, however, the Bronco’s 2.3-litre turbo four and 2.7-litre turbo V6 are smoother, more refined, and more powerful than their equivalents in the Wrangler world. Sure; you can get a V8 as well as a diesel V6 in the Jeep, but those are never going to be volume sellers.

This one’s a close call, but the Bronco edges the Wrangler out because while it maintains many of the cues from the original – the headlights (somewhat), grille, proportions, silhouette – it really takes all of that to the nth degree with huge wheels and tires, ultrawide body, removable fender flares on some models, “gunsights” on either side of the hood meant to help line up the truck on off-road trails, chunky roof rails, and massive bumpers. Parked side by side, the Wrangler looks almost tame in comparison. 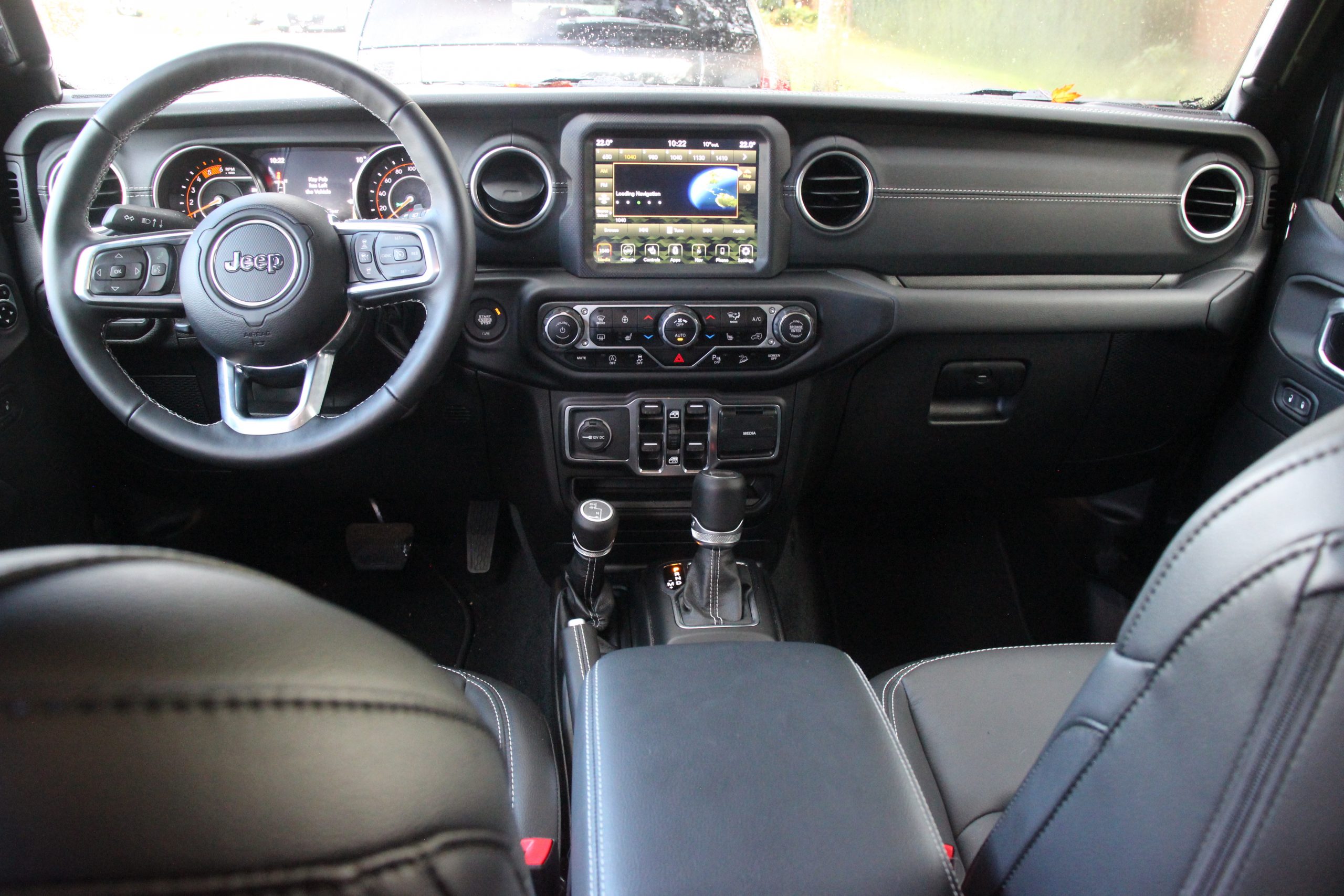 We raved about the Bronco’s tech, but the Wrangler’s more analogue feel is also a big source of attraction for many buyers, and an important aspect of the Cult of Wrangler. They like its simplicity, its purity, and the feeling that you’re that much closer to the Willys MB/JP that inspired the Wrangler, but that the needle has been moved just the right amount to know that this Jeep is a long ways down the road from the original.

Sport, Willys, Sahara, Rubicon (throw Islander in, if you’d like) – that’s pretty much it when it comes to your trim choices, this side of a few special edition packages that are mainly cosmetic in nature. On the surface, the Bronco’s trim count looks roughly the same but there are so many sub-packages that blur the line between actual trims and just add-ons that it all gets a little confusing. Like the truck itself, the Wrangler’s trim walk is nice and straightforward, which is a boon for buyers. 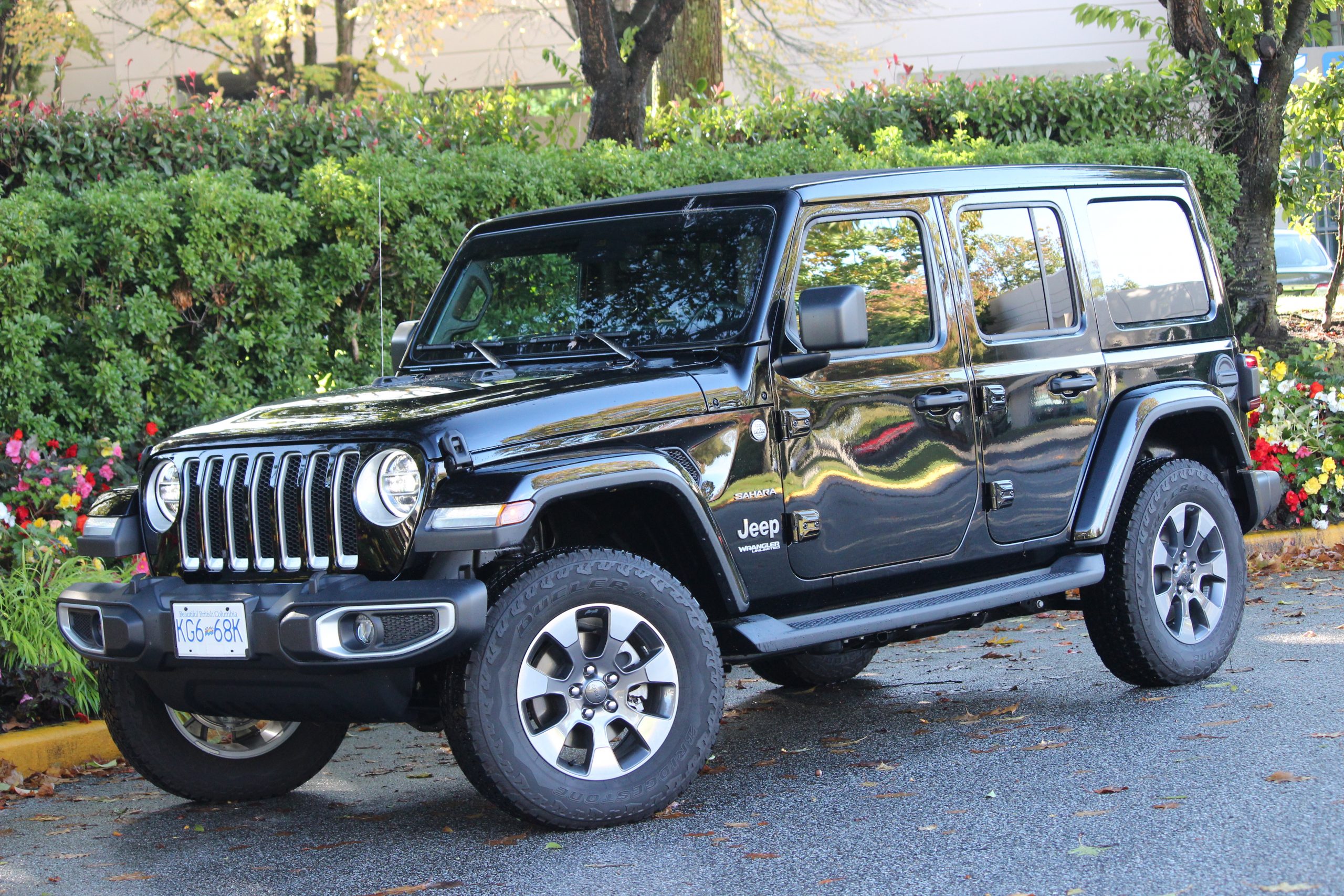 As much as we’re seeing lots of love for the Bronco these days, the fact that there has been no announcement of a hybrid model of any type is sticking in some craws.

That’s especially the case when you consider that the Wrangler already has the 4xe plug-in hybrid model in its line-up and that it can be had across three different trim levels. It’s a high-functioning system, too, that benefits the Wrangler both on the road and off it. Add the fact that a full-EV model is also on the horizon, and you could say the Bronco has some catching up to do. 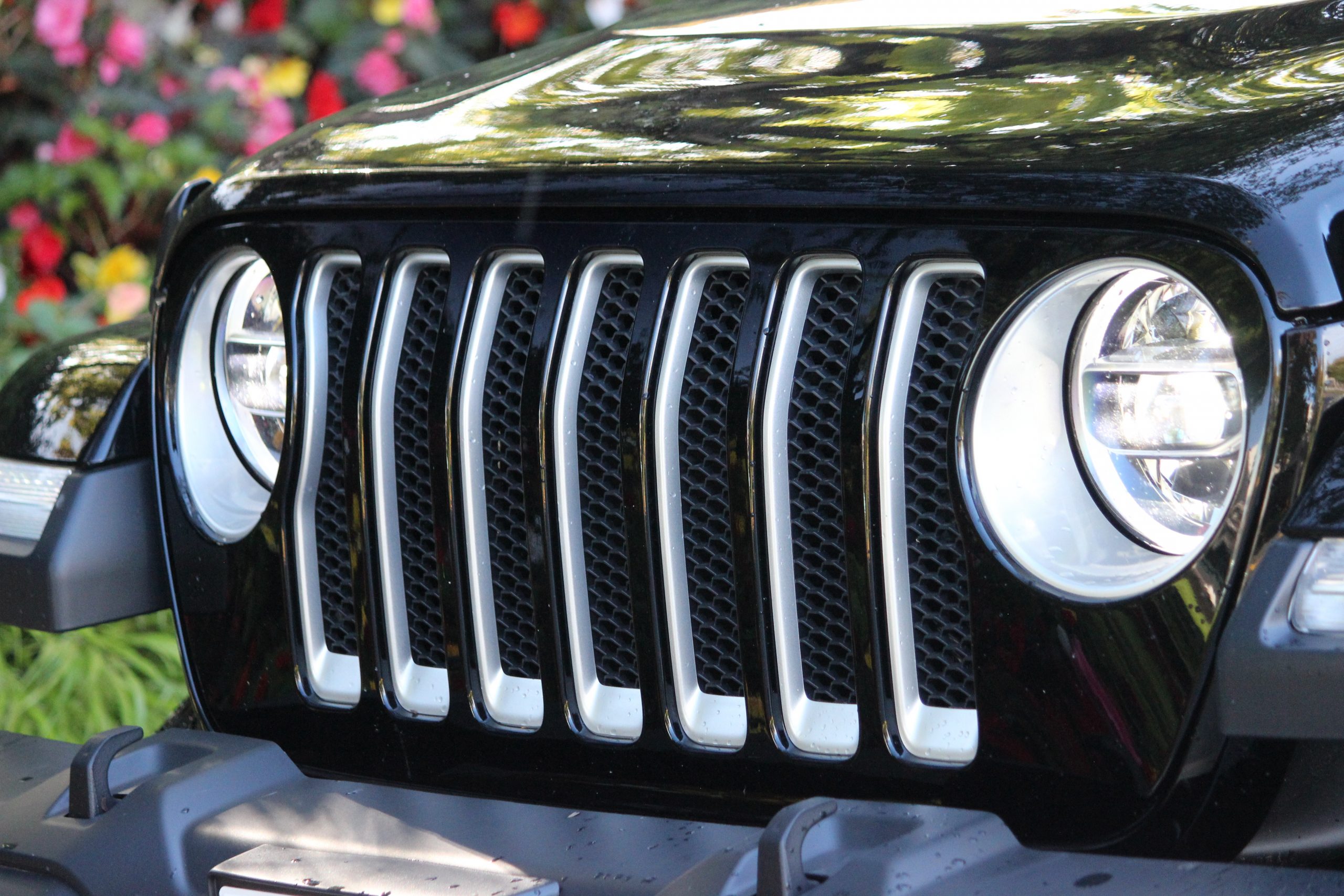 If you’re looking to save a few bucks, opting for the Wrangler will shave about $3,000 off the base price when compared to a Bronco, although the two are much closer if we’re talking the four-door models. While the Bronco is the newer vehicle, that’s a healthy savings for someone who may have always wanted a fun off-road vehicle and has saved enough Dineros to finally pull the trigger.

There is a pickup version — sort of

The Jeep Gladiator is as close to a Wrangler pickup as we’ve seen in years; even though it shares bits with the Ram 1500 line of pickups, it has all the styling and panache of a Wrangler. And as the saying goes: if it looks like a Wrangler, it’s a Wrangler.

How it all shakes out

As stated before; while these two are dead ringers on the surface, they’re actually more two variations on a theme than anything. You’ve got the cult classic brawn-over-brains entry from Jeep, and a techier, slightly more Hollywood entry from Ford. They are both good options, and which best suits you will become abundantly clear once you get behind the wheel.