How do you ensure your tires survive the season unscathed?

A flat tire can ruin everything. It can make you late for work, sour a summer road trip and potentially wreck a nice pair of pants.

Motorists of a certain vintage might recall a common sight at the side of the highway back in the day, when drivers were hunched over in the gravel to replace a punctured tire.

Today there’s a generation of drivers who have never experienced a flat tire, thanks to advancements in tire technology that have made flats almost obsolete. Almost.

We largely take our car’s tires for granted and look upon the spare wheel and the requisite jack and tools in the trunk as museum artefacts. Some auto manufacturers have stopped supplying the gear, content to include a can of sealant and an electric air pump as a half-hearted measure.

Plenty has been written about winter tires, but what of Canada’s other major season – construction – when your tires are at a greater risk of coming into contact with nails, screws, broken glass and metal debris? How do you ensure your tires survive the season unscathed?

We asked two tire experts with 75 years of industry experience between them – Vinnie McGoey of OK Tire in Peterborough, Ontario, and Larry Bristowe of Consumers Tire in Toronto – for their best insights and tips when it comes to looking after our tires in the summertime. 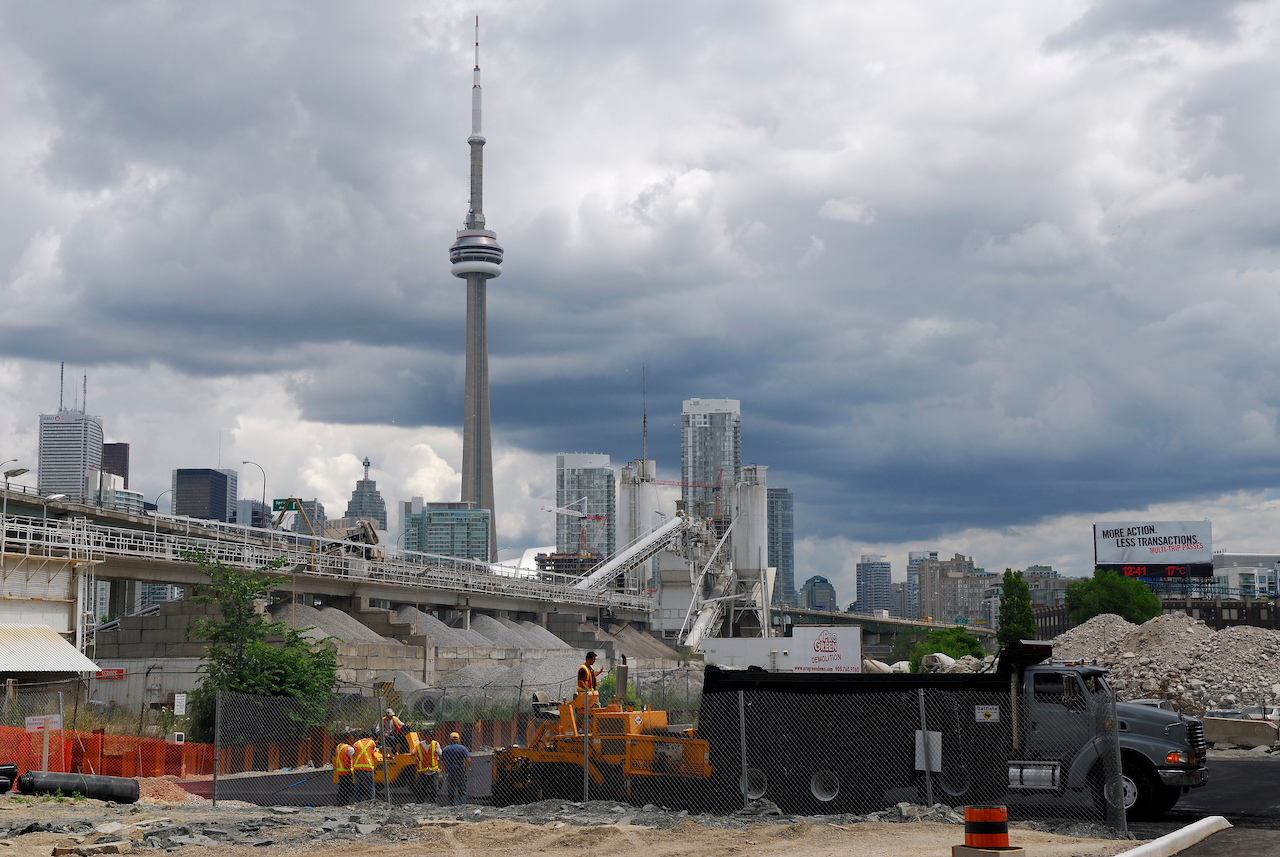 While puncturing a tire is sometimes unavoidable, it pays to be vigilant and exercise caution while behind the wheel. When driving past construction sites, assume that hazardous materials such as nails, screws and sharp metal likely litter the roadway in front of the site. Avoid the curb lane if you can.

“Construction sites are definitely a problem,” says Bristowe. “More often than not, it’s a screw I find in the tire, not a nail. Screws are sharper. I find one in a tire every day. And 75 per cent of the time, it’s in a rear tire because the front tires kick up the screw before the rear runs over it.”

Stop a tire leak from worsening by visually checking your tires regularly for any evidence of foreign material piercing the rubber and get it fixed with a plug or patch. Bristowe also recommends checking the tire sidewalls for bubbles, or what he refers to as “shock ruptures,” caused by big impacts that fold the sidewall and may then be damaged by the wheel rim. 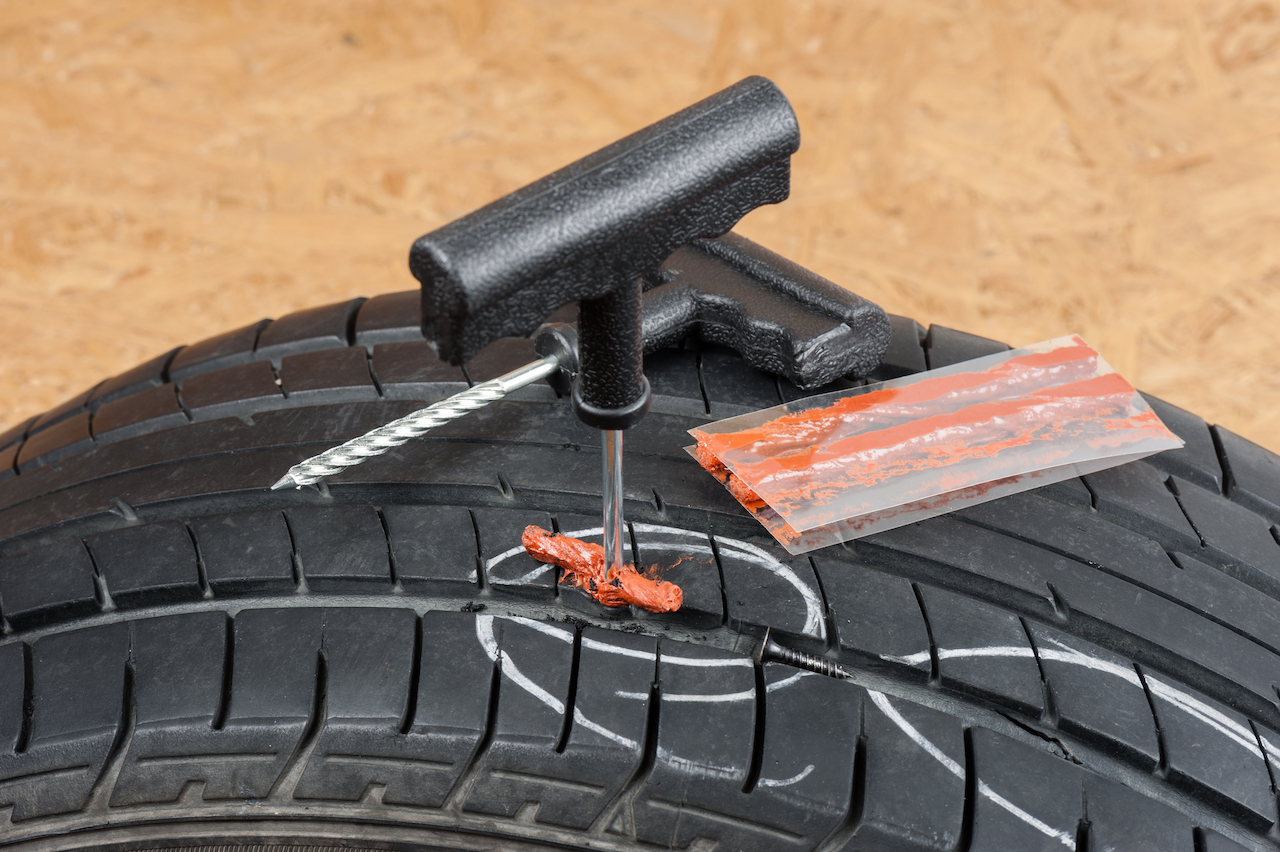 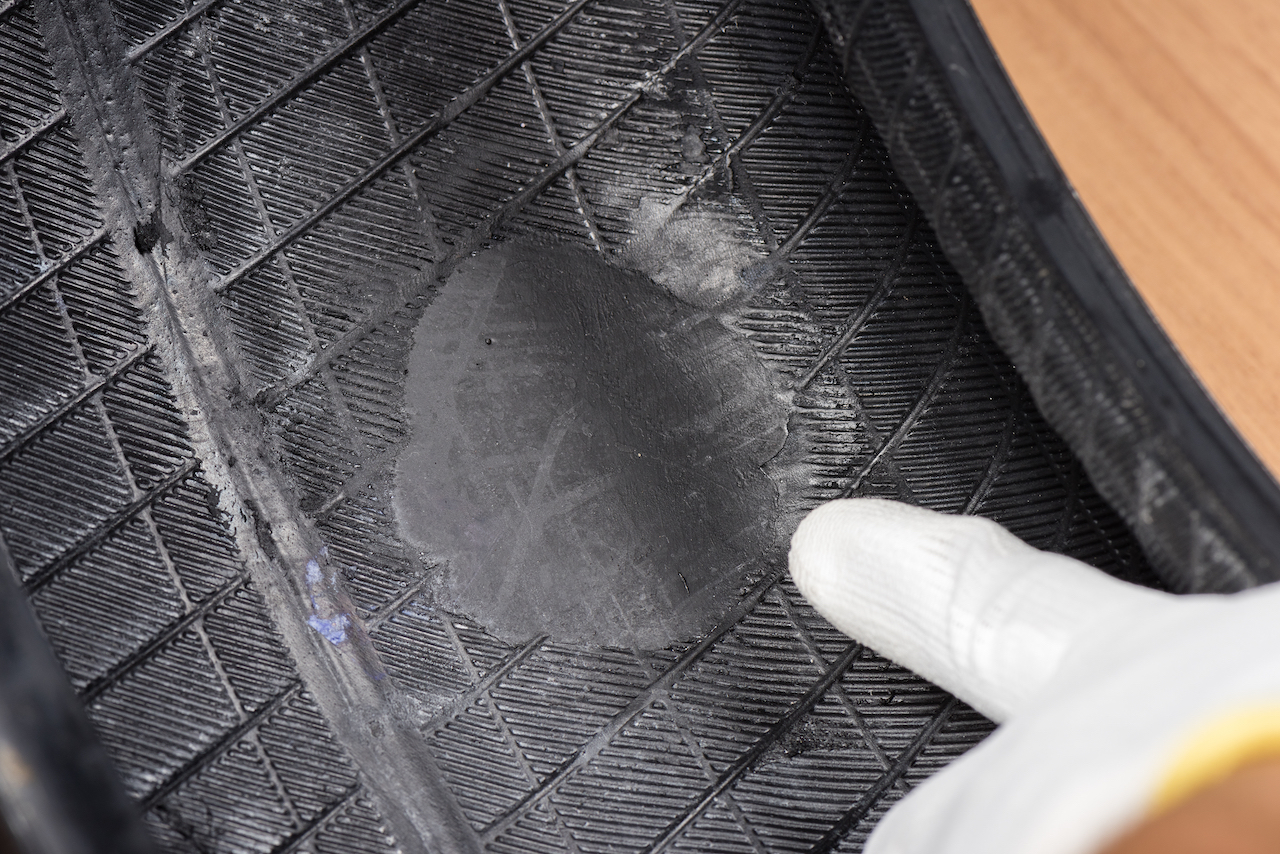 Motorists are more likely to uncover a slow leak in their tire rather than experience a dramatic blowout while underway. So what to do? Service centres offer two common remedies: tire plugs or patches. Here are the pros and cons of each.

Plugging a leak is quick, cheap and convenient because it’s done with the tire on the rim. The technician simply removes the offending nail or screw and plugs the hole with a soft rubber plug that is supposed to stay in place for good. However, it’s prone to leaking over time.

“The frayed edges of the steel belts inside the tire will shred the plug over time and it will fail,” advises McGoey. He strongly recommends a patch as a permanent fix. Applied to the inside of the tire (once removed from the wheel), chemical vulcanization restores the integrity of the tire and seals the hole left behind by the nail.

There’s some labour involved, so budget $50 or $60 for a patch repair. By comparison, plugging a tire costs $20, or even less if you buy a do-it-yourself kit. Bear in mind you should not plug a hole less than a thumb’s width from the shoulder of the tire; it’s unsafe to do so and it’s considered unrepairable.

Mandated after the Ford Explorer/Firestone Tire debacle in the early 2000s, the tire pressure monitoring system (TPMS) lamp in your vehicle lights up when it senses low pressure in one or more of your tires. Auto manufacturers have adopted two distinct systems: direct and indirect monitors.

Direct systems use an electronic sensor at the valve stem to read the air pressure inside each tire. It’s more accurate, but it represents an extra expense when swapping tires between seasons because a second set of rims requires another set of sensors at $40 to $60 per wheel.

“I find a lot of customers don’t bother adding sensors to their winter tires and wheels, preferring to live with the TPMS light on their dash over the four months rather than pay $250 for sensors,” says McGoey. He notes the sensors can present finicky service issues and require lithium batteries that have to be replaced every five years or so.

An indirect system is inherently simpler and less costly. It employs your vehicle’s antilock brake sensors to monitor the rotational speed of your tires. A wheel that’s spinning faster indicates a smaller-diameter tire due to lower air pressure. It works with any tire/wheel combination, requiring only a recalibration at the touch of a button when you swap tires. 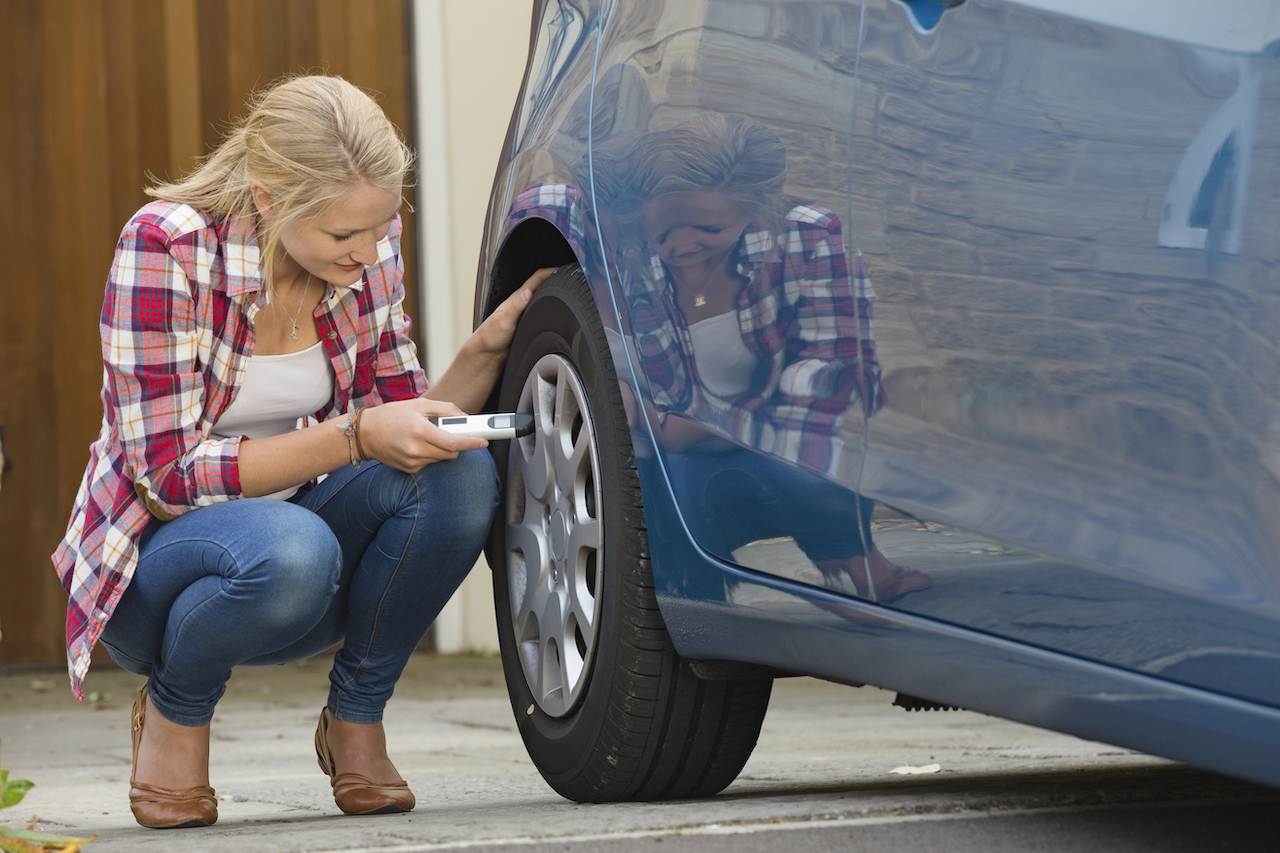 Almost one-quarter of all vehicles on the road have at least one underinflated tire. If your tire pressure monitoring system flashes a warning this is an indication that the pressure in one of your tires is lower than the recommended pressure (which is specified on the label on the driver’s door jamb and in the owner’s manual).

TPMS generally works well, but it may not tell you which tire needs air. That’s why our experts recommend drivers keep a $10 tire-pressure gauge in their glovebox.

“I give a bunch away to my customers every year,” says McGoey. Underinflated tires make the car harder to control at speed and are prone to blowouts. Not to mention use more fuel. Radial tires may look normal even when underinflated, which is why a tire pressure gauge is so handy.

Overinflated tires can also lead to problems, including uneven tire wear, a rougher ride, suspension damage, high heat and tire failure. When your tires are inflated to the recommended pressure you can tackle lumpy pavement with ease and are less likely to fall victim to road debris. 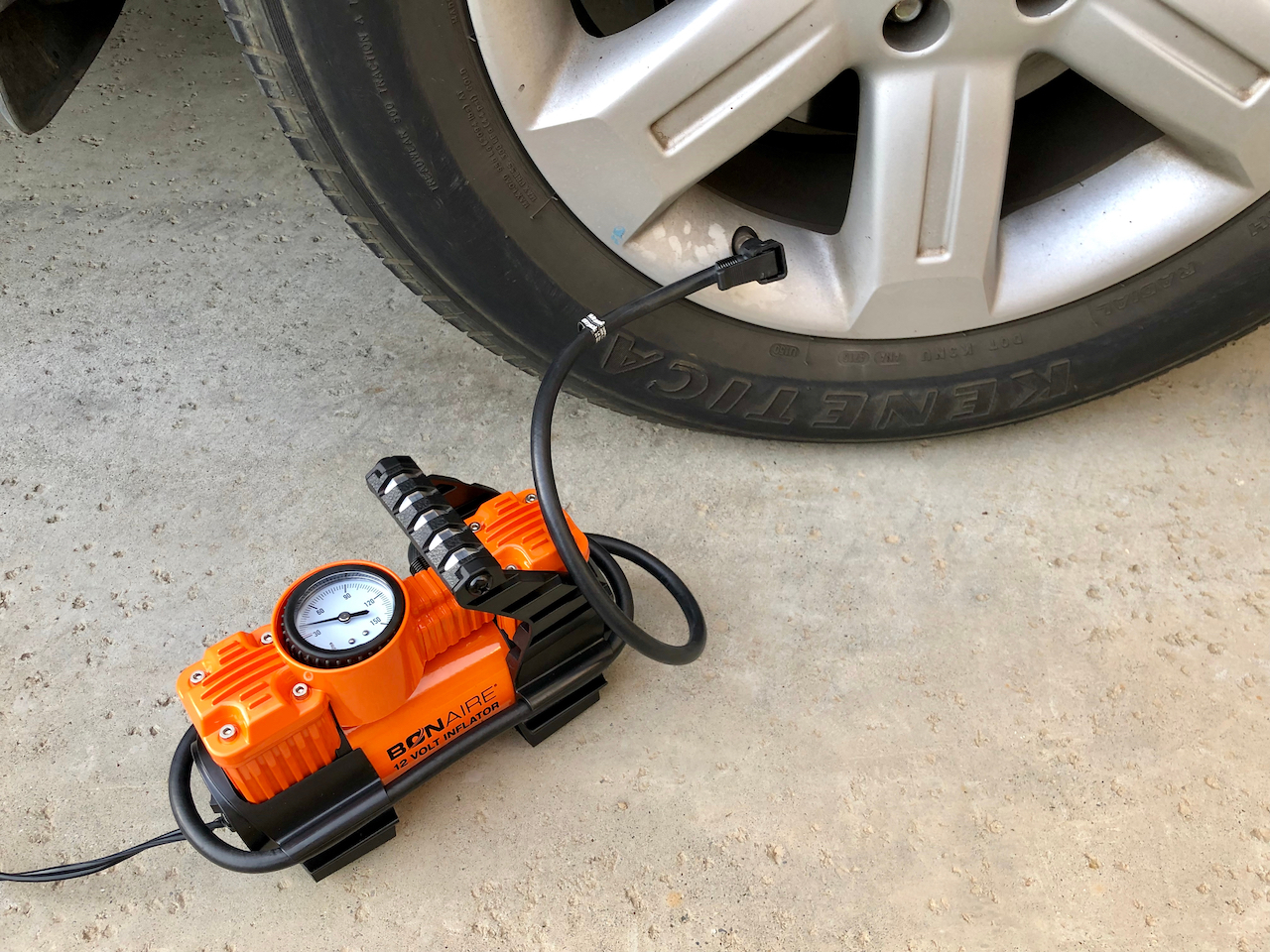 Sometimes a tire pressure gauge or monitor will reveal a slow leak, but upon close inspection of the offending tire there is no evidence of any puncture damage. So what gives? The source of the mysterious leak may in fact be your aluminum wheel.

Lightweight aluminum alloy wheels are standard issue on the majority of new models these days, and many older vehicles wear them, too. Most motorists are under the impression aluminum doesn’t rust or corrode – but nothing could be further from the truth.

“Alloys will definitely corrode over time and it frequently occurs between the rim and the bead of the tire, pushing the bead off the rim and compromising the air seal,” explains McGoey.

To solve the leak, the technician has to remove the tire from the wheel, grind the corroded metal all the way around the rim, apply sealant and remount the tire. It’s a common fix and one that’s often required when aluminum wheels get to be about eight to 10 years old, McGoey notes.

Look after your suspension 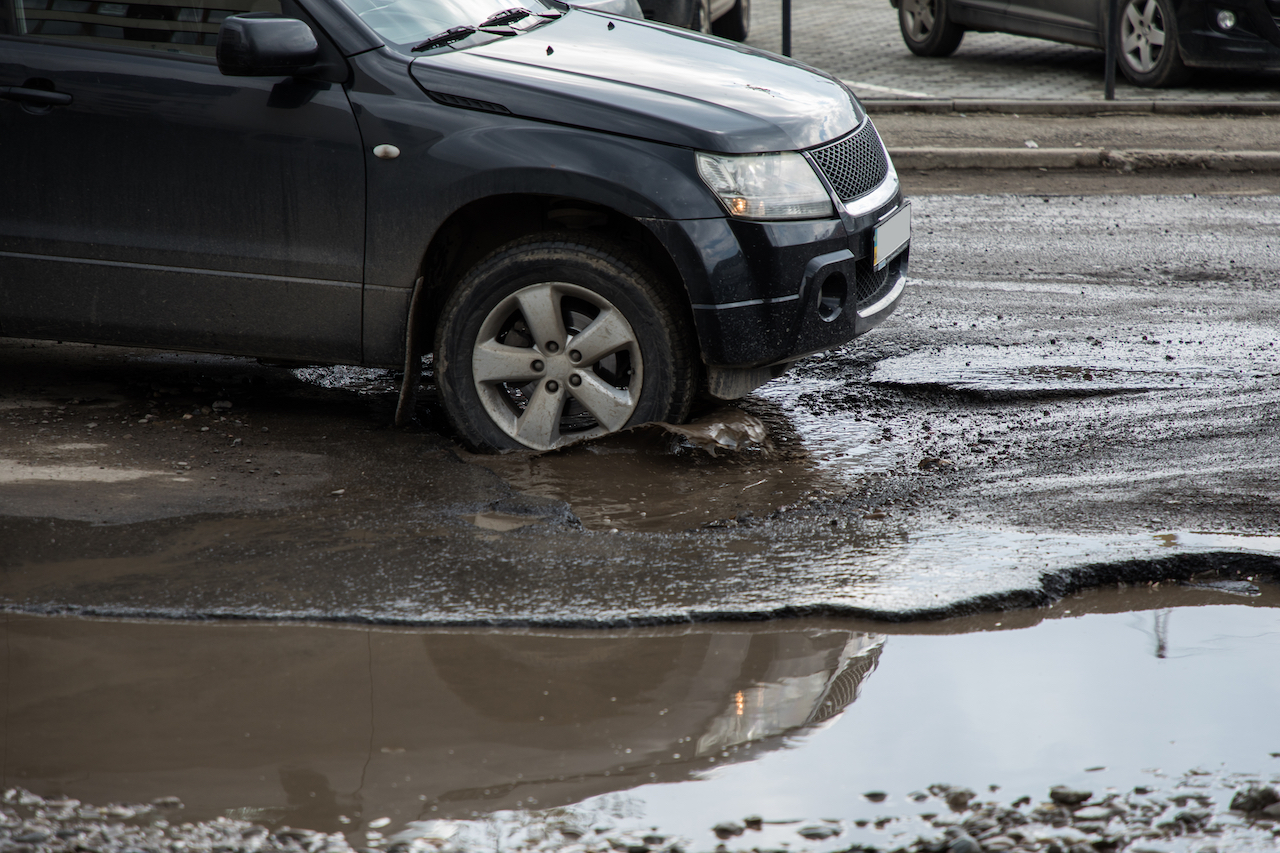 Your vehicle’s suspension is designed to absorb impacts and keep your auto on the straight and narrow. But bumps and potholes can take a serious toll on your shocks and struts, especially on Canada’s pockmarked and frost-heaved roads.

As your suspension gets assaulted by the bumps and lumps over time, it works its way out of alignment. Misalignment has a direct impact on your tires, which will wear unevenly as the wheels begin pointing in every direction except straight ahead.

“Alignments are very important to tire life. I do 20 alignments a week in my shop,” says McGoey. “Checking the alignment every spring after the hard winter season is key to maintaining your tires.” It’s also an opportune time to look for worn tie-rods, bushings and other suspension components that can affect tire life. 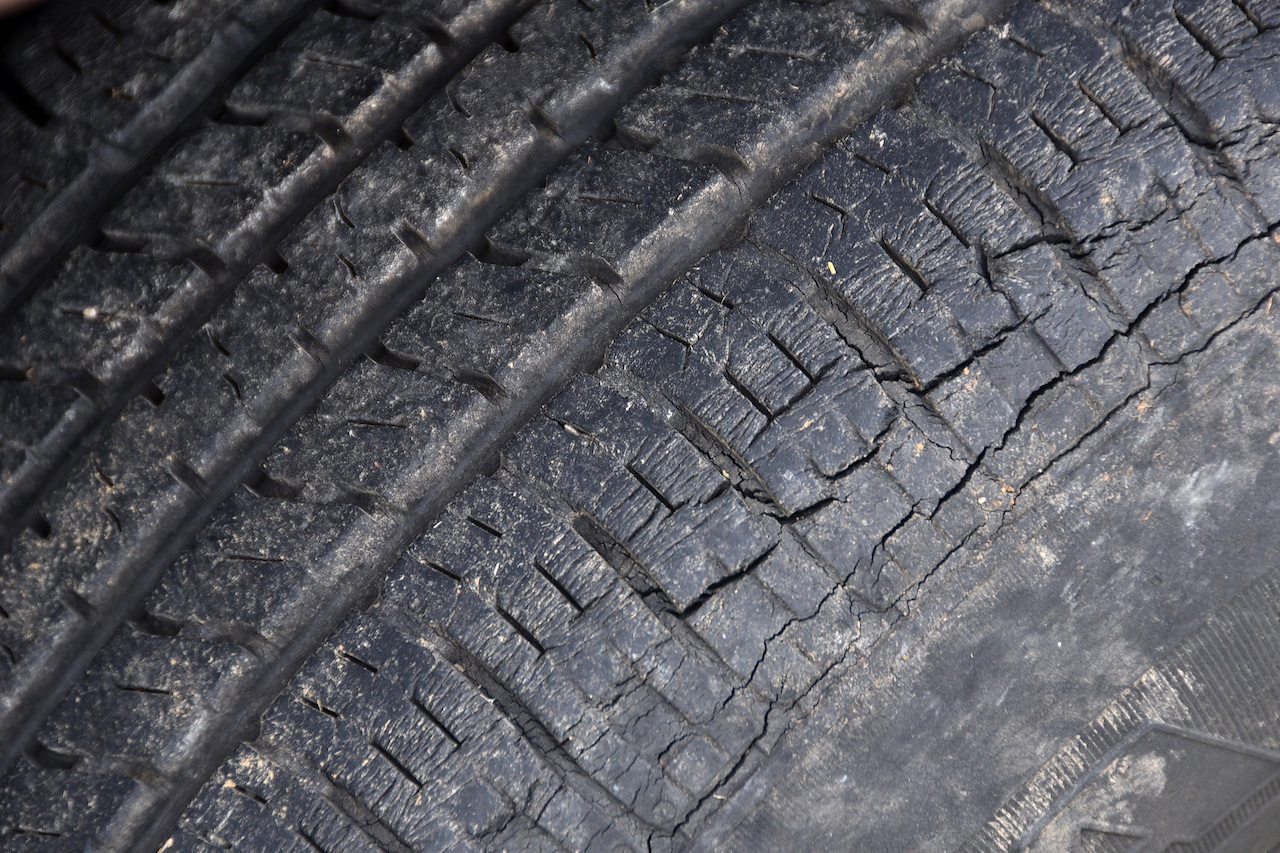 Your tires consist of natural rubber, silica, oil, carbon black and a cocktail of chemicals to bond everything together. Fresh from the oven your tires were soft and pliable, and hugged the road lovingly. But over time the chemicals and oils evaporated and the tread became hard.

After five or six years your tires will have dried out and won’t work nearly as well, even with adequate tread depth. Among other things, they will become noisier and they may skid farther during an emergency stop, making for a harrowing drive.

“The rubber cracks as the tires dry out,” says Bristowe. “These days we’re recommending tires be replaced after five years of service, rather than five years after the manufacturing date.”

And that’s even if the tires haven’t approached the wear bars moulded into the tread. Tiny spider cracks, and especially big ones, reveal your tires have reached the end of their safe service life.

Get to know your spare tire 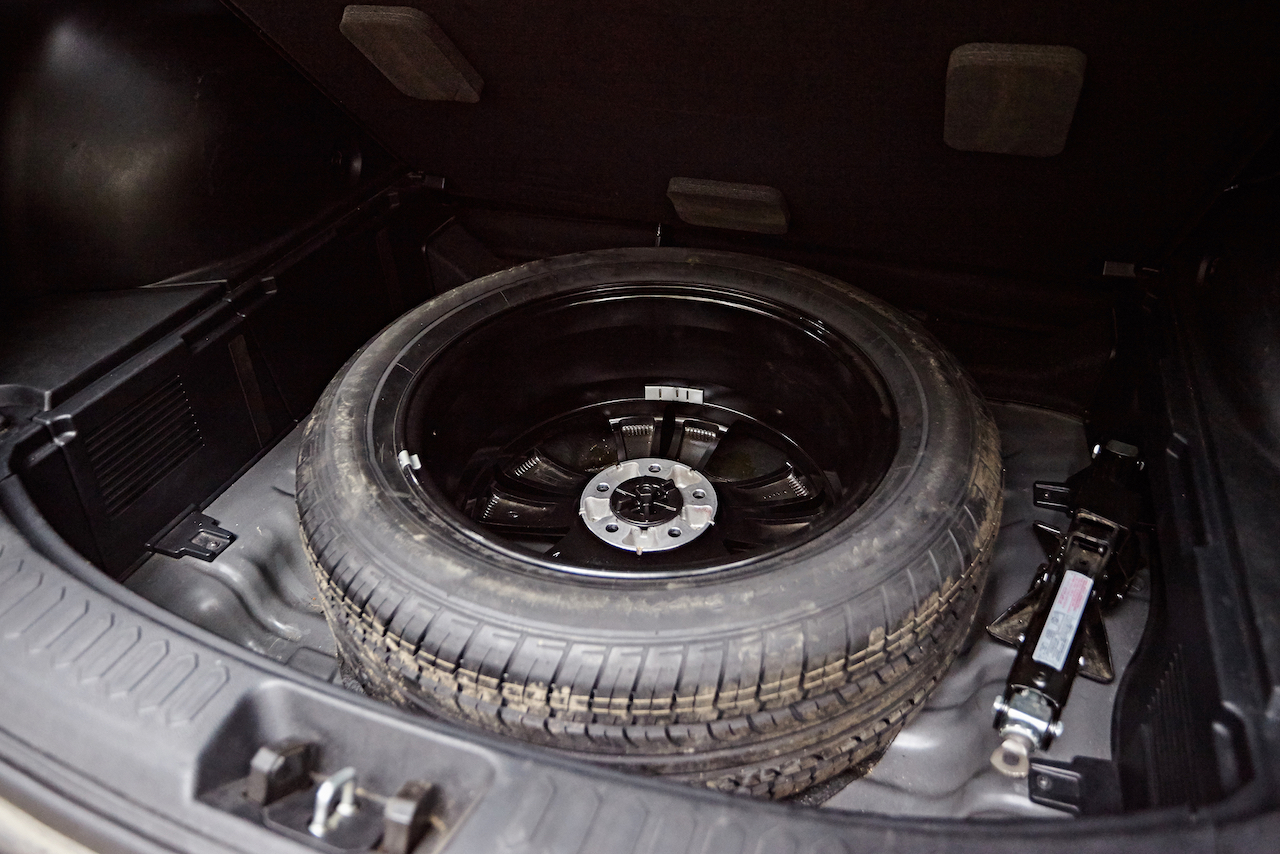 Most vehicles still come with a temporary spare tire and the necessary tools to replace it at the roadside. It’s called a temporary spare because it is a smaller, lighter wheel/tire assembly that takes up less storage space. It’s usually found under the cargo floor, fully inflated at 60 psi (413 kPa). Check the air pressure on a regular basis or, at the very least, before a road trip.

A temporary spare is designed to be used in combination with the original tires on your vehicle. But remember: your vehicle’s ride and handling will be compromised, which is why it cannot be driven at speeds greater than 80 km/h. It’s intended solely to get you out of a dire situation and to a service centre, where a full-size replacement tire can be installed.

It’s smart to become familiar with your spare tire and the related tools. Practice changing a tire in your driveway or a parking lot on a sunny day. Follow the instructions printed in your vehicle’s manual. If you experience a sudden flat while driving, steer to the shoulder of the road or turn into a side street away from traffic. Try to avoid stopping on a slope. 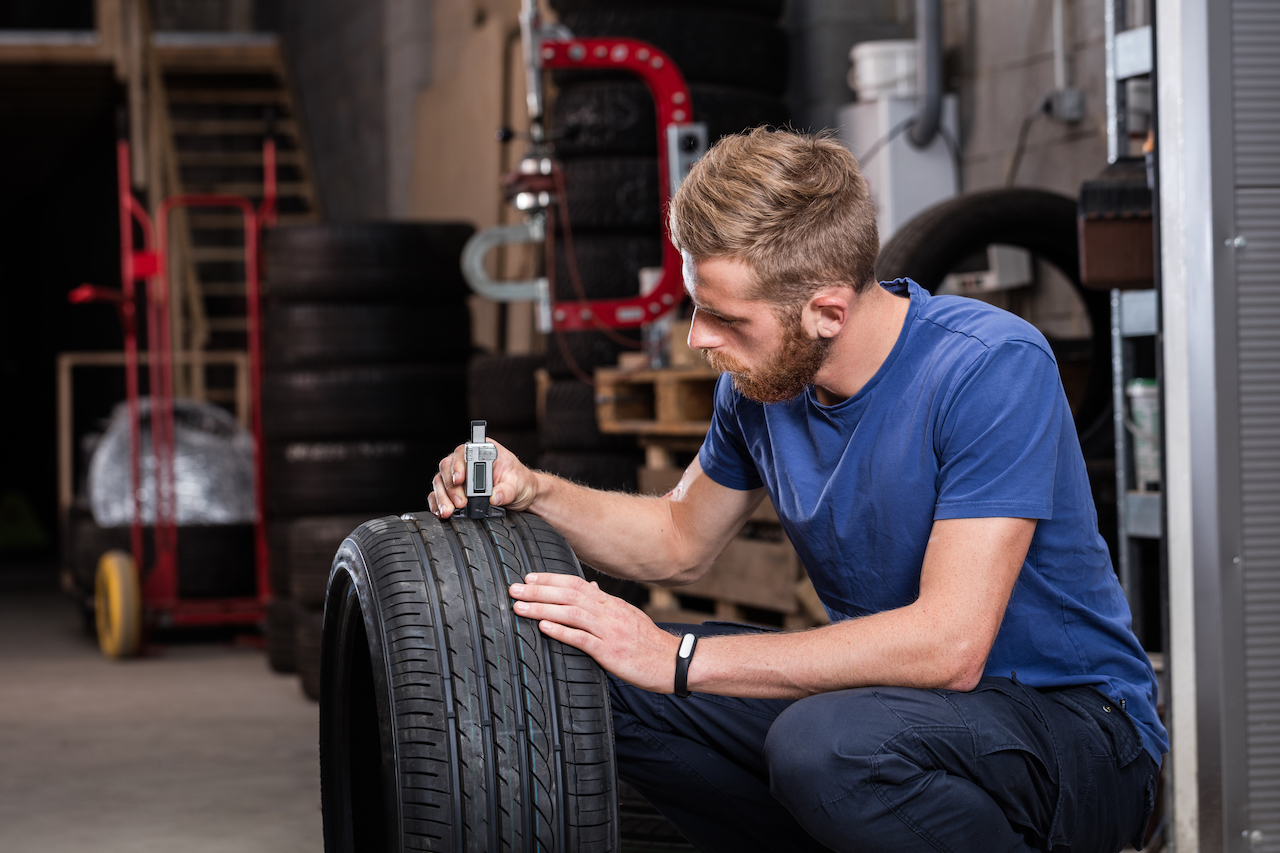 We asked Larry Bristowe what is the biggest mistake car owners make when it comes to their tires. We thought he was going to say failing to rotate their tires every 10-12,000 kilometres. Nope.

“The number-one mistake they make is trying to run them until there’s nothing left of their tires,” he says. While tires can be used until there’s only 2/32 of an inch of tread depth remaining, he’s surprised that motorists don’t see the benefits of replacing their tires sooner.

“Worn tires may work okay on dry pavement, but you jeopardize safe handling and braking in wet conditions,” he warns. Bristowe reminds us that the contact patch that keeps your vehicle connected with terra firma is no bigger than your hand. There isn’t a lot of room for error.

“Nobody looks forward to buying new tires,” he says. “But tires shouldn’t be a grudge purchase.” Look after the ones you have properly and they will reward you with a long life and (hopefully) no aggravating flats.