Every once in a while, the Queen grants an exemption that lets a British automaker put something a little more raucous under the hood. Something American. Usually with eight cylinders.

There’s just something about the classic British car. Sure they’re just sports cars, or sedans, but somehow they’re more appealing. Curvier, more interesting, sexier, even. At least the ones we see. After all, for every Jaguar XJ there are a thousand Vauxhalls that couldn’t pick up style even if they crashed into it. But what the UK’s greatest carmakers couldn’t always manage was under the hood. And no, that’s not a dig against the reputation of the 6-volt positive ground electrical system. But they’re better known for fuel-sipping tiny fours than for big bore V8s that roar. So, every once in a while, the Queen grants an exemption that lets a British automaker put something a little more raucous under the hood. Something American. Usually with eight cylinders. So here’s a look at some of the best British cars with American engines. 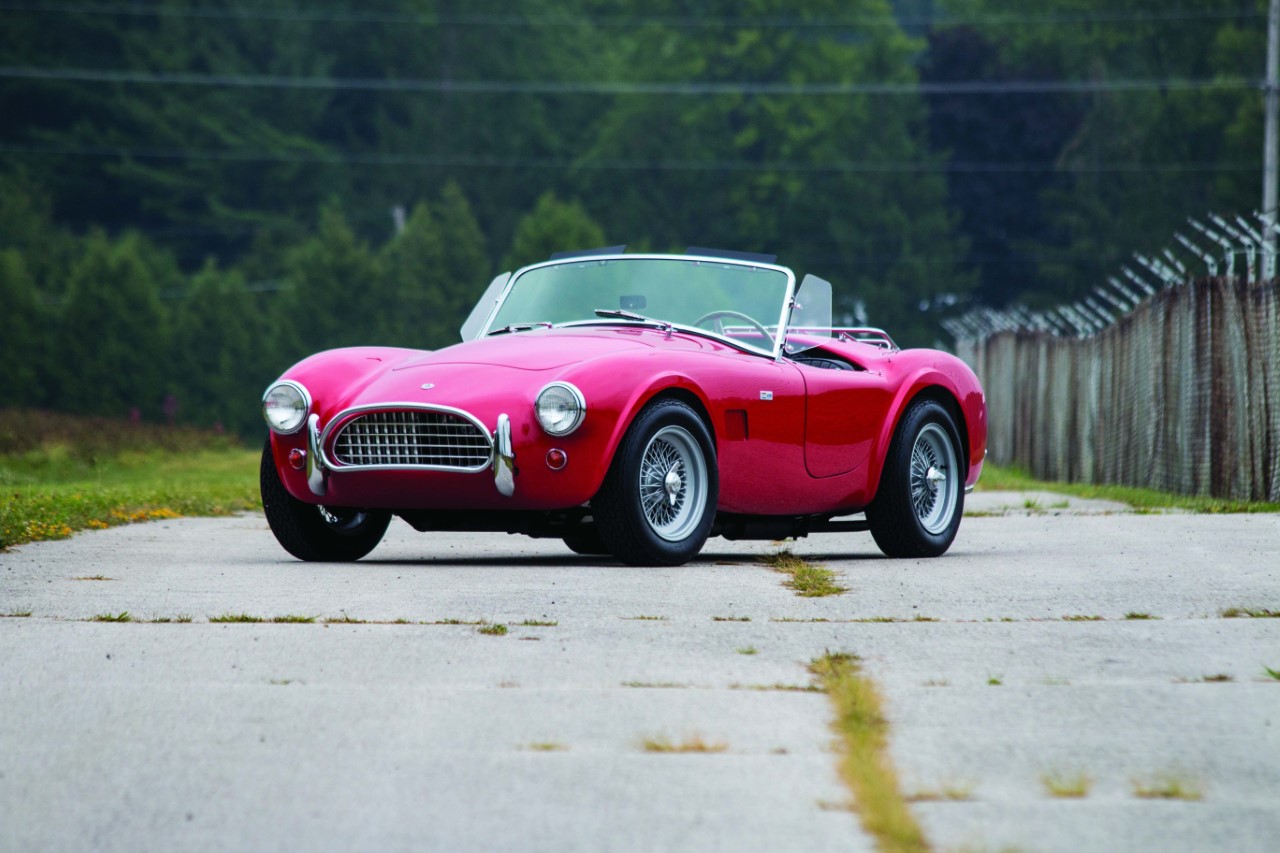 The most famous is the AC Cobra. So yes, we’re going to put it first on the list. The AC Ace was a typical small British sports car, designed shortly after the war. A steel tube frame, aluminum body panels, and a Bristol straight six that was a pre-war BMW design borrowed from BMW. In other words, a lump. Carrol Shelby, legendary crammer of horsepower, reached out to AC and asked if they could modify one to fit a V8. AC said sure, if you find us an engine. Chevrolet told Carrol no, Ford told him yes, and the legend was born. Starting with a 3.6-L V8 prototype, the engine size grew quickly to 4.3-L then 4.7. Eventually, with a new chassis hiding under the skin, a 7.0-L V8 arrived to destroy the competition and rear tires. 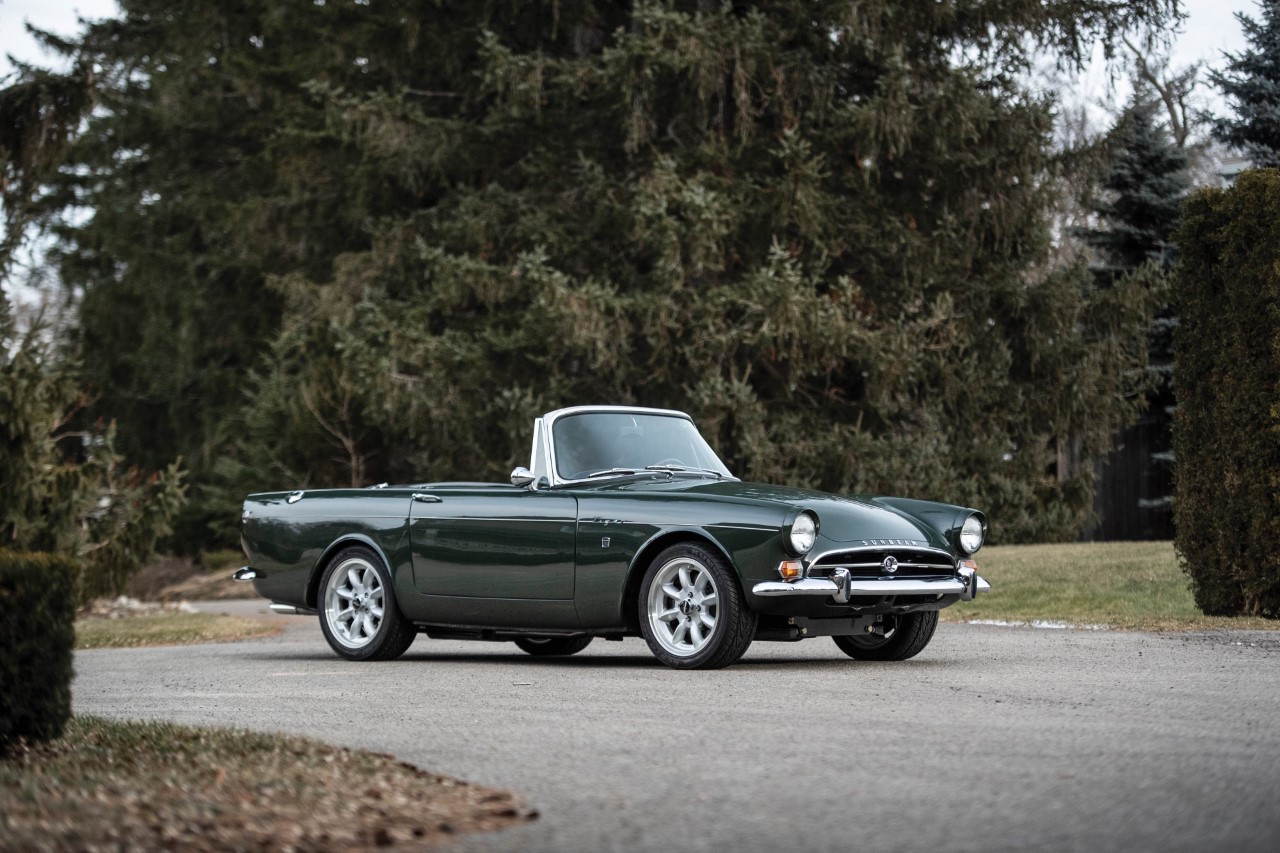 The Sunbeam Alpine was another small mid-60s roadster. With a boring four-cylinder engine. Once again, Carrol Shelby was there. Though this time on the request of Sunbeam parent Rootes sales manager Ian Garrad. Once again, drop a Ford 260 V8 into the car and go make lots of noise. The new creation was dubbed the Tiger.

The engine just barely fit, but fit it did. And the car made double the power of the standard one. Though the assembly process involved the use of a sledgehammer to “refinish” the bulkhead. Dealers offered packages to boost the power again, from 164 hp to 245, for less than the cost of floor mats today.

This V8-powered sports car became the car of one of the most famous secret agents of all time. No, not Bond. Maxwell Smart. Agent 86 of C.O.N.T.R.O.L. 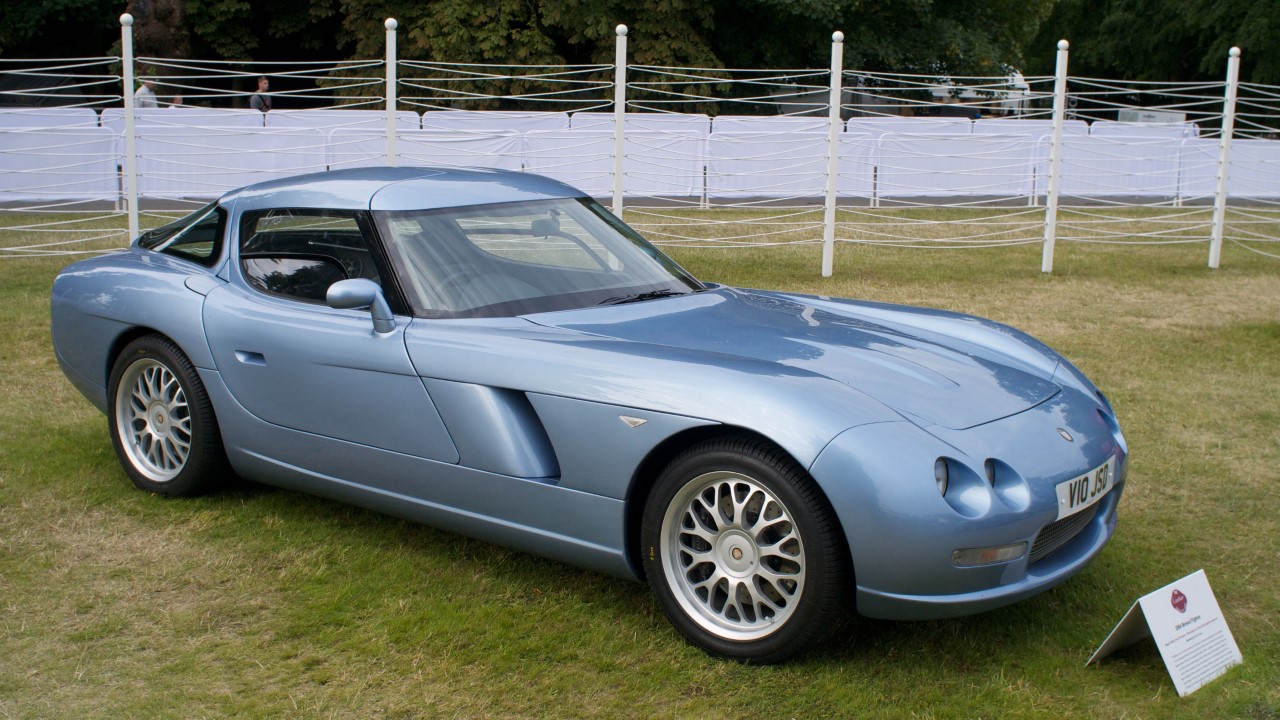 Ok, so not all of these American engines were V8s. Bristol Cars, an on again, off again boutique car maker has made some very interesting models over the decades. The last one might have been the most ambitious. It was certainly the most powerful.

The Fighter wore deceptively slippery bodywork and gullwing doors, penned by a former Formula 1 engineer, but its real reach to the stars was under the hood. An 8.0L V10 borrowed from the Dodge Viper. Yup, 525 hp and 525 lb-ft of torque. Bristol’s been using Chrysler engines since 1961. Opt for the Fighter S and get 628 hp. There was a planned 1,000+  hp turbo version, but none were produced. It’s also said to allow for six-foot seven drivers. 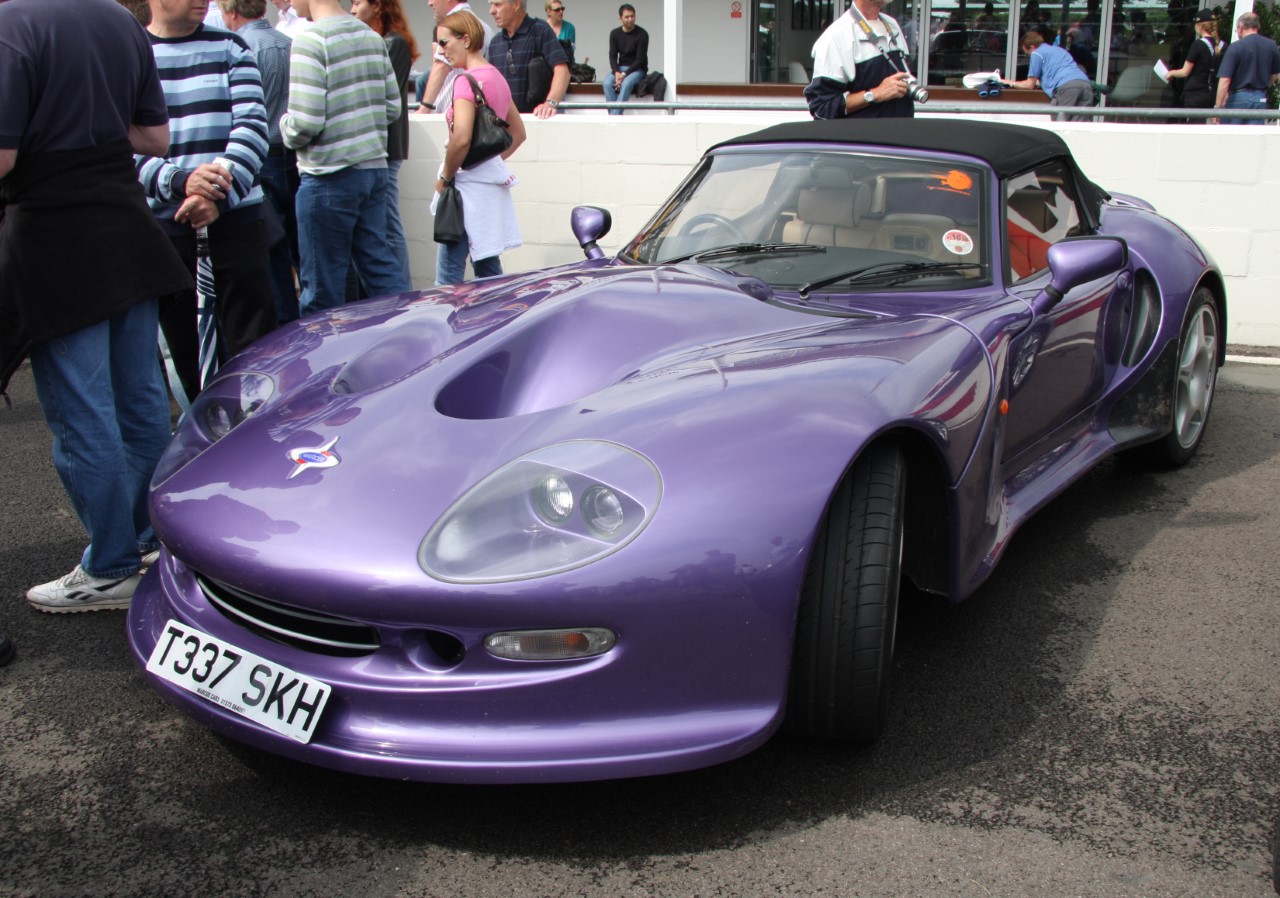 By Brian Snelson – originally posted to Flickr as Marcos Mantis, CC BY 2.0

Marcos is a long-time brand, building cars for decades, but it’s so small you probably haven’t heard of them. The Marcos Mantis of the early 2000s is a bit of a British Panoz. Take a sports car plan, add a Mustang V8, take most of the Mustang interior with it, and build a race car. There were street cars, but they also went racing. In a spec-series, as well as the British GT Championship. 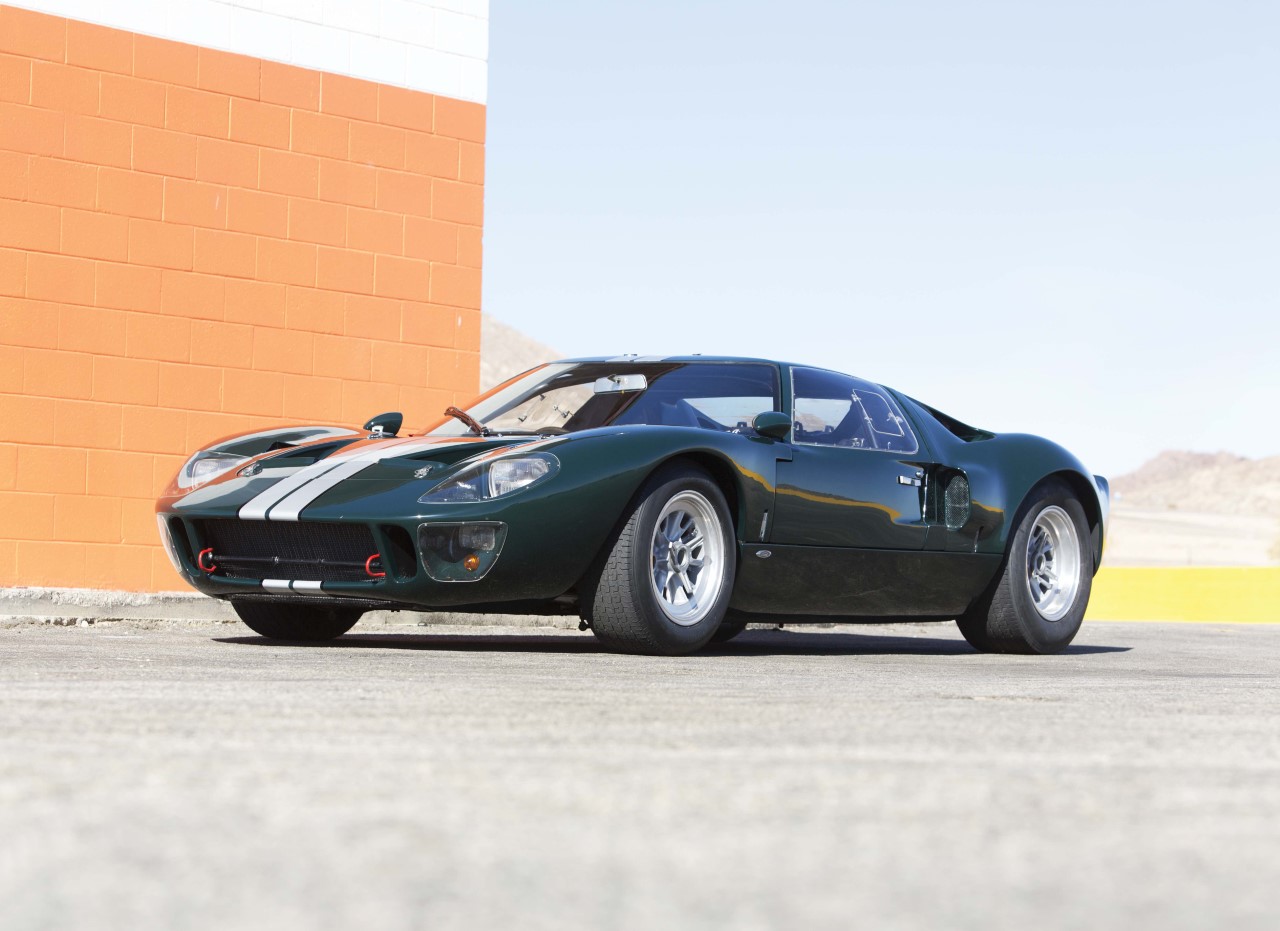 What’s that? The most famous racing Ford of all time isn’t a British Car? Well, how about the Mondeo? Or the Ka? Well, the GT40 out-Brits both of them.

That’s because while Ford had plenty of NASCAR and other US racing engineers, they didn’t know how to Le Mans. So Ford got help from Lotus, Lola, and Cooper. All serious British racing teams and car builders. It’s the Lola design that became the first GT40. Though partly because Lotus insisted on having its name on the car.

The actual project was run by Lola boss Eric Broadley and ex-Aston team manager John Wyer. It was built by Ford Advanced Vehicles Ltd, the name given to the team. The chassis was built in Coventry, the glass fibre body in Farnham.

The racing cars, packing either 7.0L Ford V8s or 4.9L models, won the 24 Hours of Le Mans three times. And before you point out that it was four-years straight including 1967, the car that won that year was a MK IV chassis. Which were all built in the US and were quite different under and over the skin. So we’re splitting some hairs. 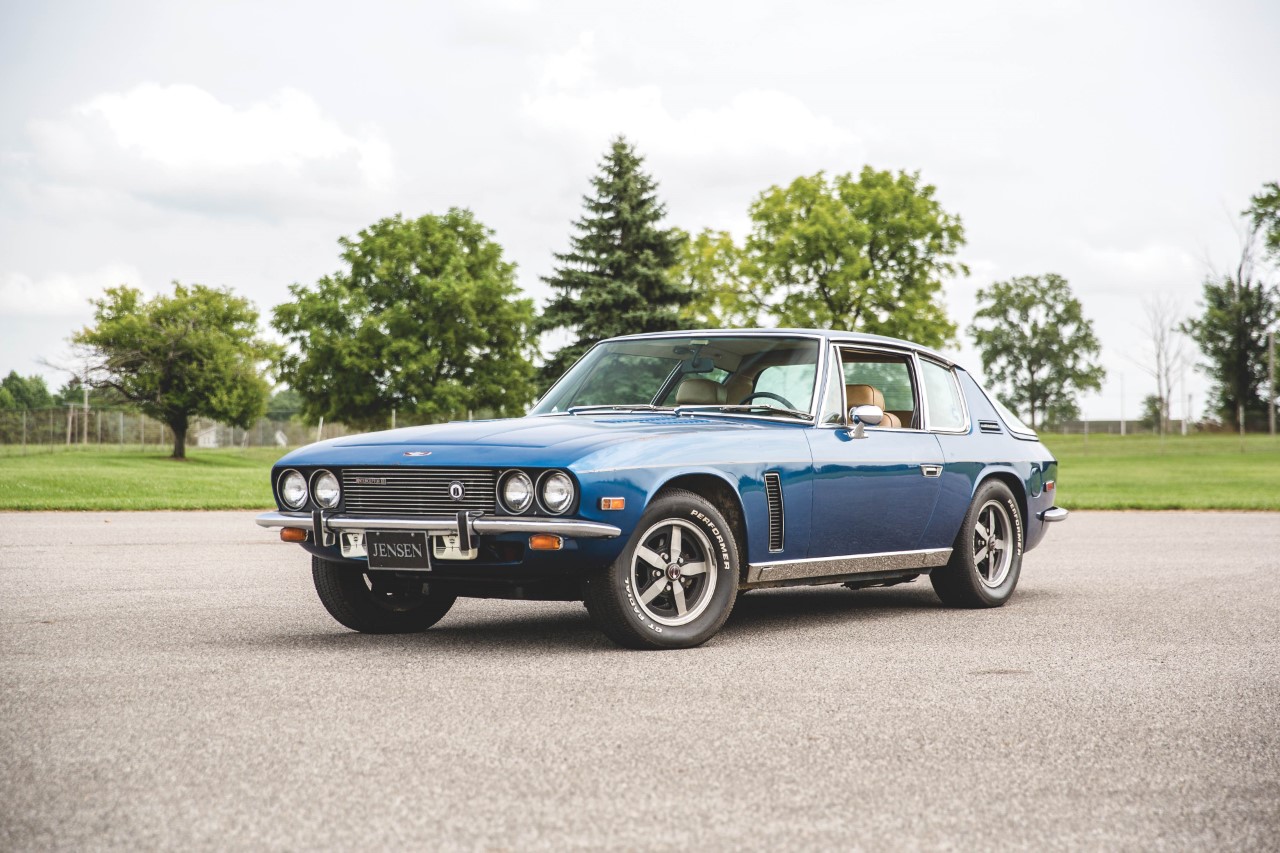 Is it one of the coolest car names ever? Yes. Is it an impressive British road car? You betcha. Could you get it with a massive Chrysler V8? And how.

The Interceptor was a GT car built near Birmingham in the UK. The body was designed by Carrozzeria Touring in Italy. It was a big, mean muscle car, at least by UK standards. And that meant that it needed a great big mean engine. So they reached out to Chrysler. Early cars use a 6.3L V8 that produced 335 hp. As emissions controls loomed in the early 1970s, Jensen went big. The 440-six pack. A 7.2L V8 with three 2-barrel carbs boasting 330 hp and loads of torque. Though pretty soon it would be traded for a 5.9L V8 to keep things cleaner.

A close relative of the Interceptor was the Jensen FF. An Interceptor following the Ferguson Formula. That means all-wheel drive under this big muscular body. 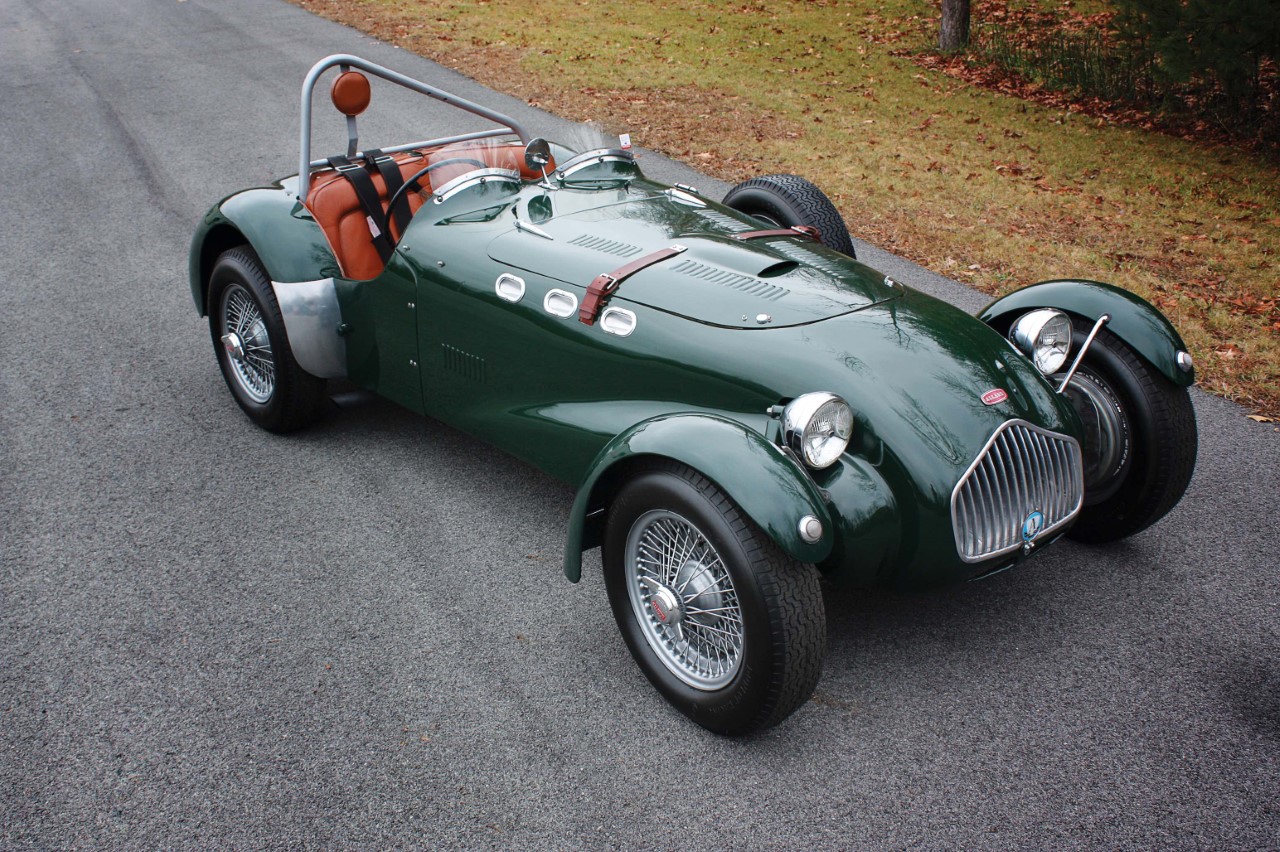 Allard was a small automaker started in 1946, building cars for just around 10 years near London. But its trademark was putting big American V8s into light British cars. Cobra before Cobra. The J2 was one of the most impressive. An aluminum body and coil-spring front suspension. Both unusual in 1946. They started out with a 4.4L Mercury flathead V8, but then quickly moved to more modern powerplants. It was successfully raced using a 5.4L Cadillac V8, but could also have Chrysler, Buick, and Olds engines fitted.

Who were some of the famous names to drive a J2? How about Carroll Shelby. Or Zora Duntov, the engineer responsible for turning the Corvette into a performance car and keeping it that way. The cars are said to have 40 wins and 32 second place finishes in 313 race starts between 1949 and 1957. Impressive. 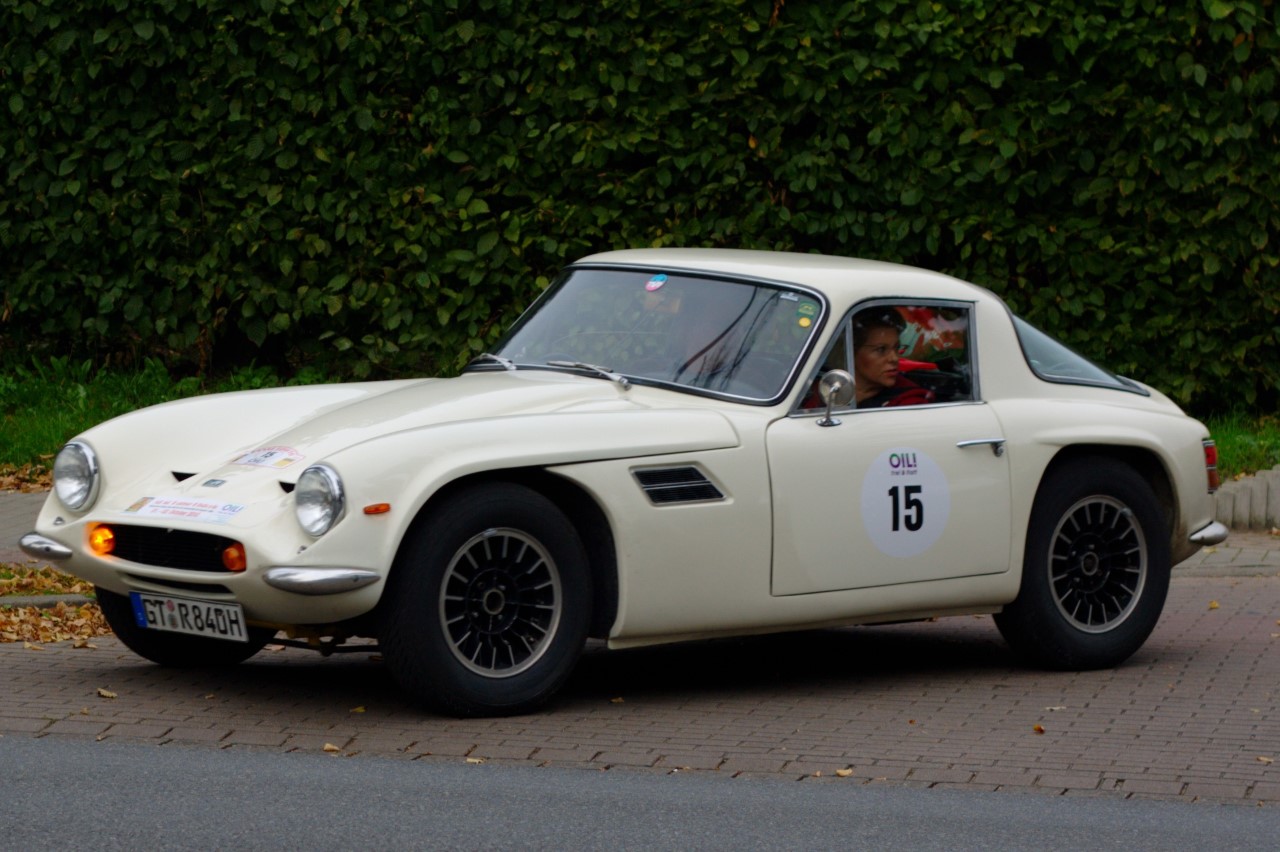 TVR, named for founder Trevor Wilkinson, built some astonishing sports cars, starting back in 1946. One of the best was the Tuscan. Now the company’s used that name more than once over the years, but we’re referring to the 1967 model. It was based on the company’s Grantura, meaning it was fibreglass over a tubular steel backbone frame. For this one, TVR ditched the tiny four-bangers it had been using and went big.

TVR called Ford and got a load of 4.7 L V8s. Just like in the Mustang. That gave the tiny coupe 271 hp and a top speed of more than 250 km/h. That is, after all, a big shot of power for a car that doesn’t show 1,000 kg on the scales. Think of it as Cobra performance with a roof. And more obscure.

The list of British cars with American engines looks short until you remember that one of the most-used British V8s wasn’t. That’s the Rover V8, nee the Buick V8, that found itself in just about everything from the Rover Group. Including Land Rovers until well into the 2000s. It was a Buick design, launched in 1961, that was bought by Rover and launched in 1967. It was small, light, and versatile. So it lived a very long life.

So while dozens of cars use that engine, we’ll limit this to two of the coolest. 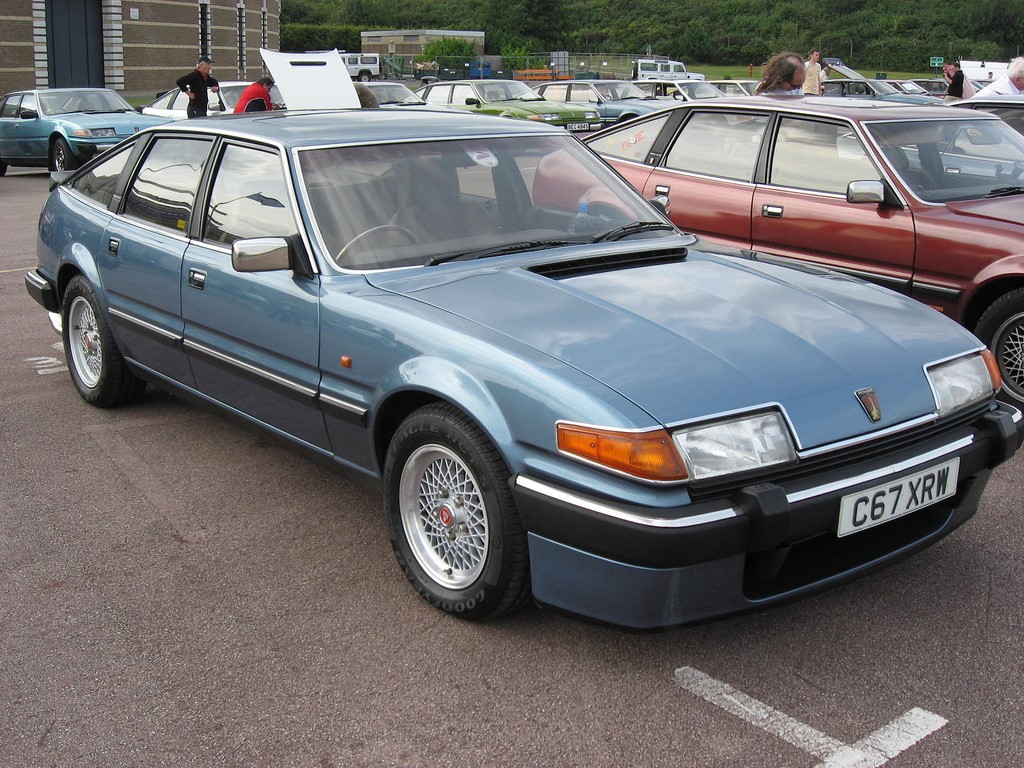 The Rover SD1 is probably the most iconic performance sedan of the late 70s and early 80s in the UK. For Specialist Division and 1 for the first in-house car for the division.

With a nose that appears to have been borrowed from Ferrari, a hatchback tail, and a 190 hp 3.5L V8, this was the car of choice for racing drivers off course as well as for the fuzz. The SD1 was a popular patrol car, taking part in countless pursuits as well as legends like the Liver Run that saw a transplant organ driven 44 km through the heart of London in just 30 minutes in order to save a life. 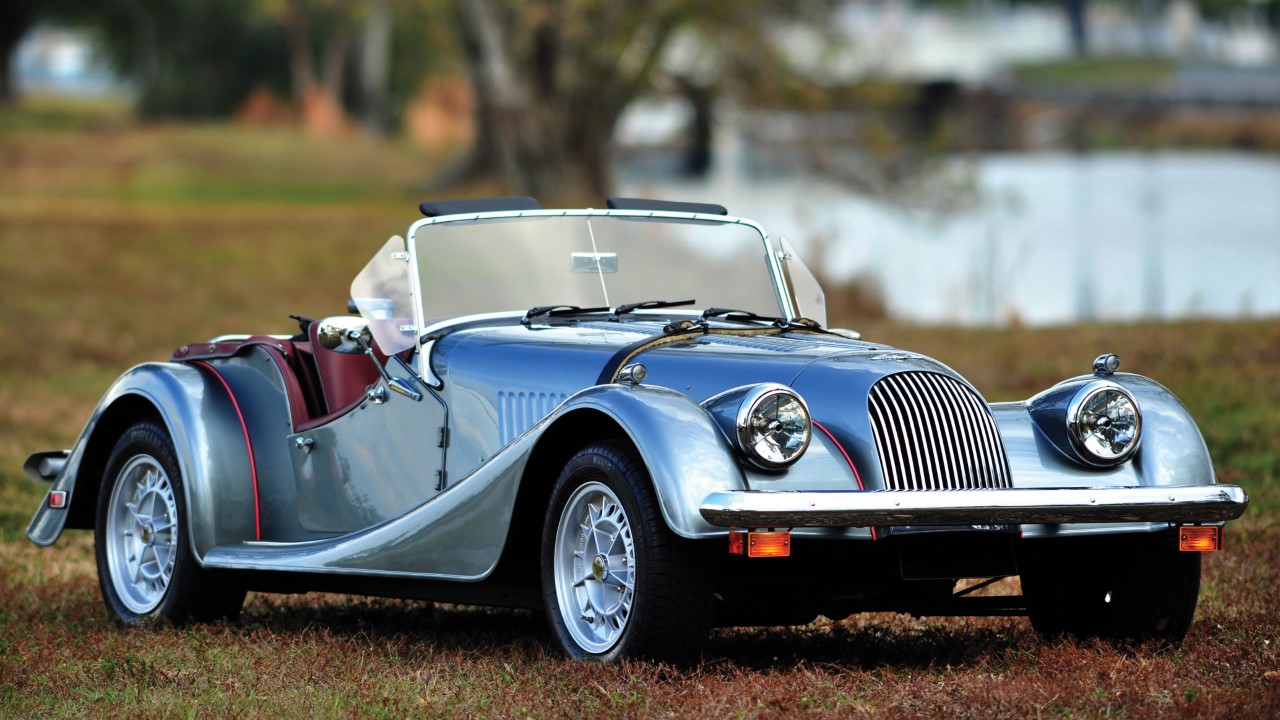 Since the Rover V8 was born way back in 1961, it seems fitting to put a car on this list that manages to be even older. That’s right, the car with a wooden frame. Holding on the body, that is. The actual chassis is steel. It’s a Morgan +8.