Monterey Car Week is one of the biggest events in classic cars. Where a huge number of some of the most valuable classics and most important cars in the world come. Some just to be driven, some to be raced, and some to enter the Pebble Beach Concours d’Elegance. But some come to be sold. At a series of auctions that top half a billion in sales in just a few days. One of the biggest is RM Sotheby’s Monterey auction. It’s loaded with some amazing automobiles. So here are 12 of the coolest ones we saw in this year’s catalogue. 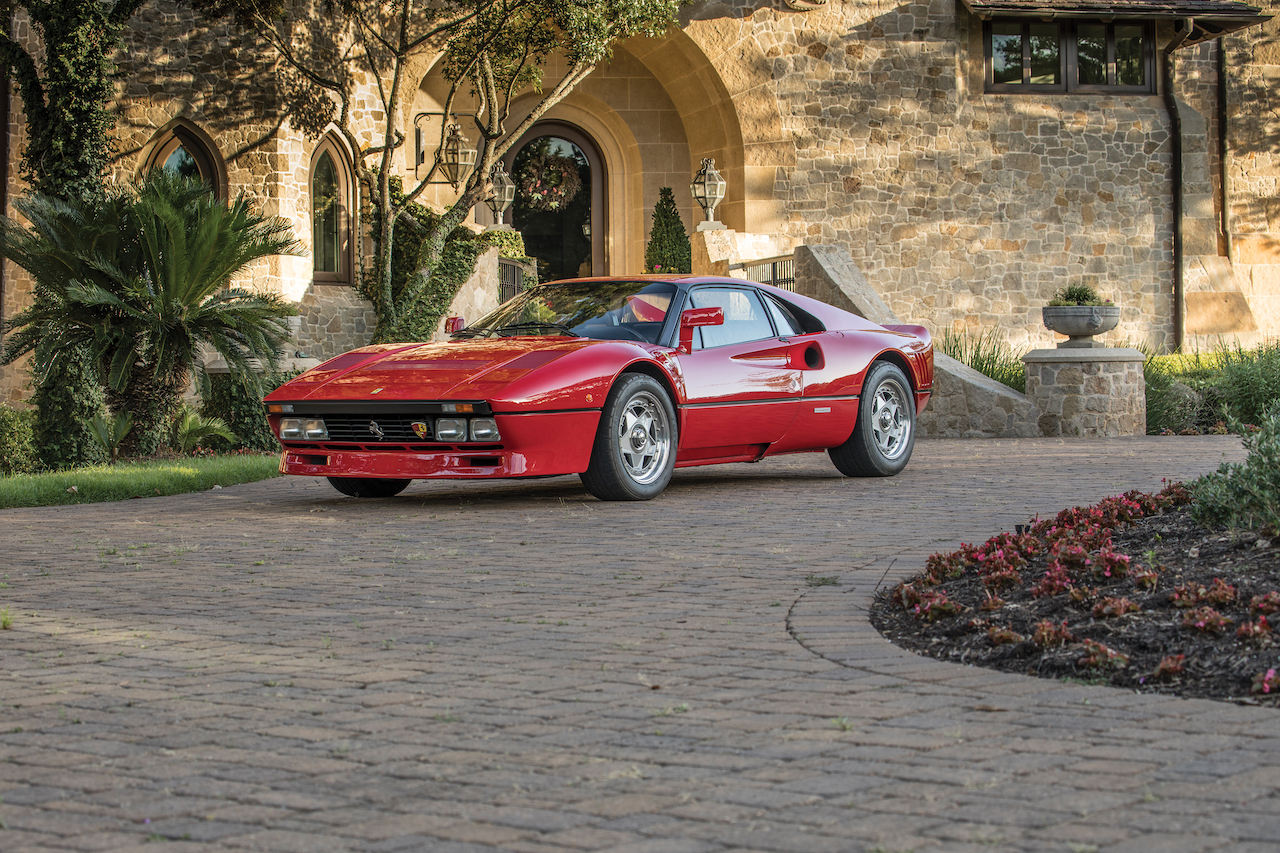 The Ferrari 288 GTO was part of Ferrari’s attempt to compete and win in FIA Group B racing. It was a technological tour de force, one that led to the icon that is the F40 that came after. Sure it was based on the 308 GTB, but the two don’t have all that much in common. Bigger fenders, larger spoilers, more air vents. And a Kevlar and carbon hood and roof. Oh, and that 2.9L 395 hp twin-turbo V8. Oh my.

This one is the 137th car built, out of 272. It’s one of just a few fitted with the sports exhaust and even fewer to get AC. It was also the first 288 GTO imported to Japan. It’s been driven sparingly, with just under 14,000 km on the odometer. And the listing says that it comes with a particularly detailed stack of history and documentation. 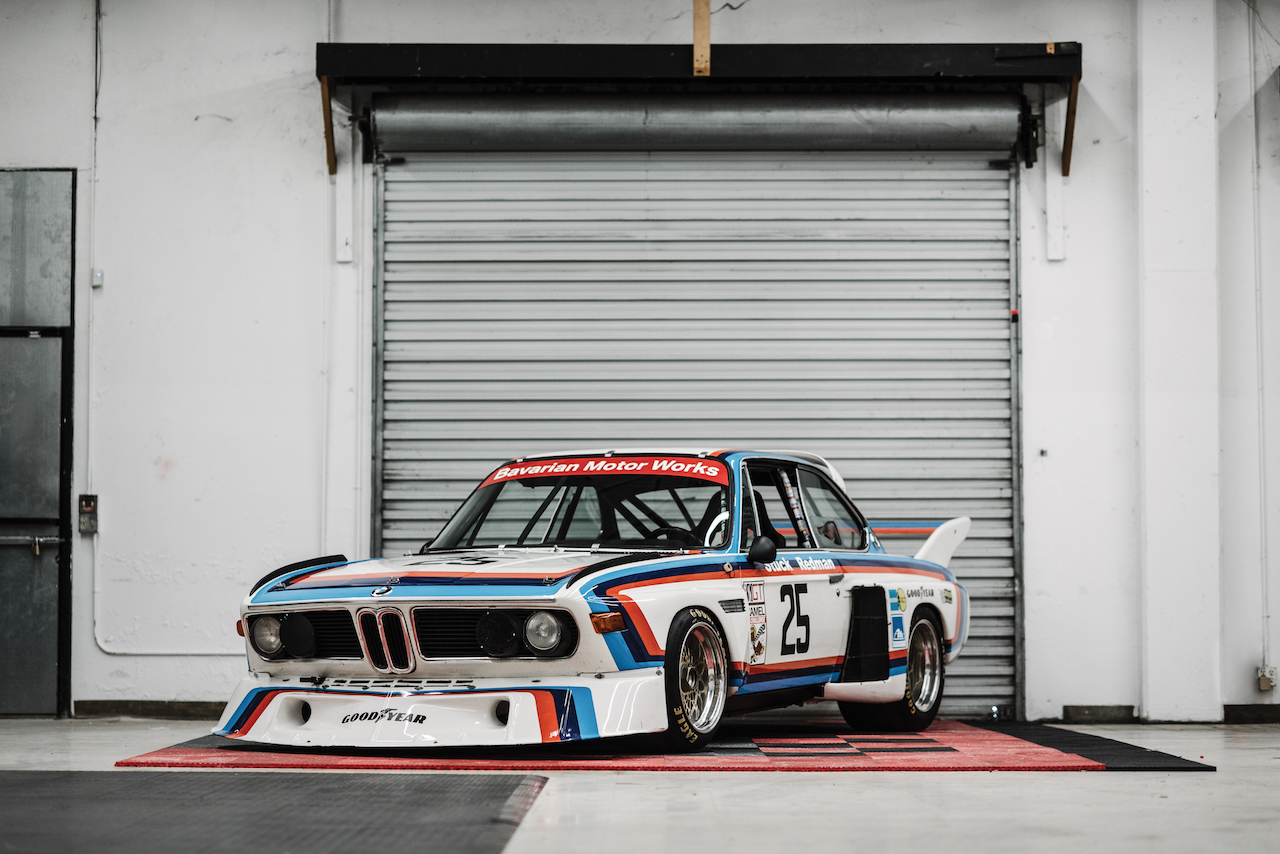 One of the wildest stock-based racers of the 1970s was the BMW CSL. A homologation special built with an oh so long front spoiler and thinner steel bodywork. The race cars were even more outrageous, wearing enormous rear fenders and a behemoth rear wing. This car is one of those racers.

This particular car was campaigned in US touring car racing. It debuted at the 24 Hours of Daytona in 1975, where it retired with engine issues. At the 12 Hours of Sebring, it finished first. Driven for seven of the 12 hours by Brian Redman, who suffered a failed wheel bearing and dead alternator in the last hour of the race. It was campaigned by drivers like Sam Posey and Hans-Joachim Stuck over the years.

Currently, it’s part of a massive collection of BMW racers owned by BMW San Francisco principal Henry Schmitt. Who is selling off that collection at this event. It’s one of only three IMSA-raced CSLs in private hands. 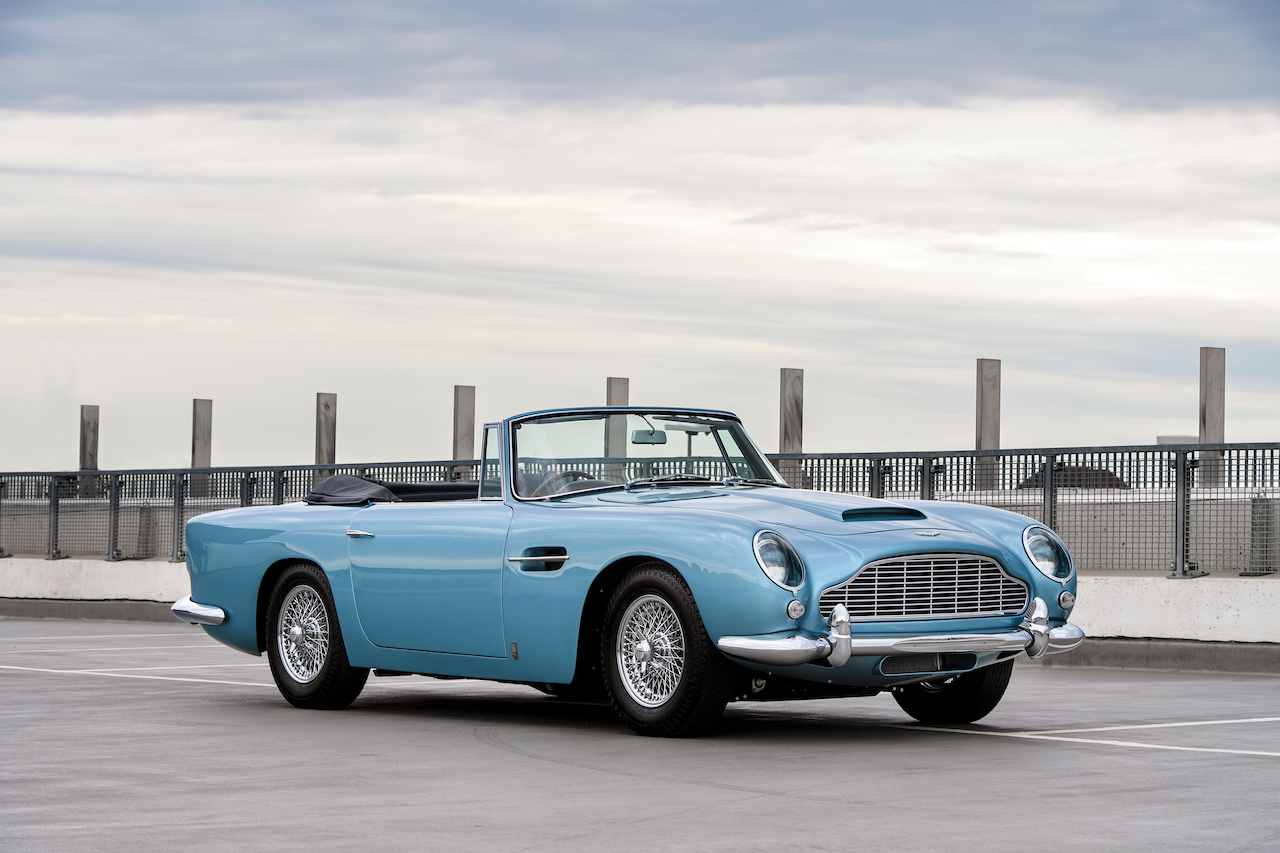 Aston Martin is having a bit of a celebration at the auction. Which means there are quite a few excellent examples for sale. Including this one which is one of just four Bond-spec cars built.

But there’s more to Aston than Bond. And more to the DB5 than silver and gadgets.

Like this 1963 DB5. It’s a convertible, and it’s blue. It’s not how you’d expect to see one of these cars, but we’d love to see more. Just 123 convertibles were built, and only 85 were right-drive like this one.

This is the fifth convertible chassis by number, and it was originally a factory demonstrator. Which is why it was finished in Caribbean Pearl over Dark Blue leather. It’s believed to be the same convertible that was at the 1963 Earls Court Motor Show. Where the DB5 was unveiled. It’s had just two owners since the factory, with the current owner sending it to the Newport Pagnell factory for a complete restoration. 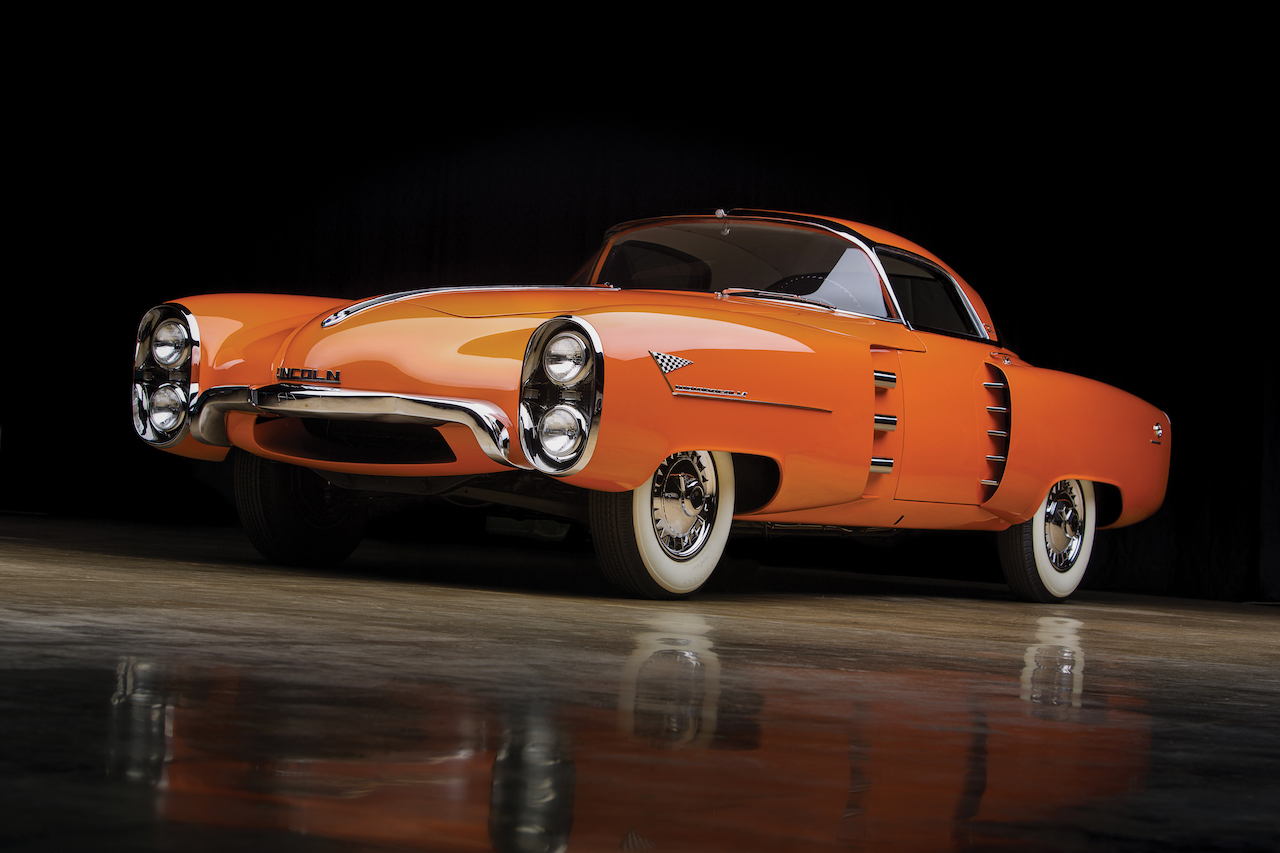 This might be the most stunning car to ever wear a Lincoln badge. It’s certainly the brightest.

Like the best 1950s cars, it was designed to look like an airplane. It was penned by Gian Carlo Boano. Through a connection with Ford, Boano and his father, who ran Carrozeria Boano Torino, secured a chassis on which to build this car.

From the stock 1955 Lincoln chassis, Boano created a jet-age masterpiece. No grille, less chrome than most cars of the era, and a shape like no other. The instruments hid under a panel making the interior seem even more futuristic.

Called the Indianapolis, it was revealed to massive acclaim. Ford bought it immediately, reportedly by the direction of Henry Ford II. It’s traded hands through the years, but in 2001 a complete restoration was finished. It’s won multiple awards since then. It comes with copies of two of the magazines that featured it back in 1955. 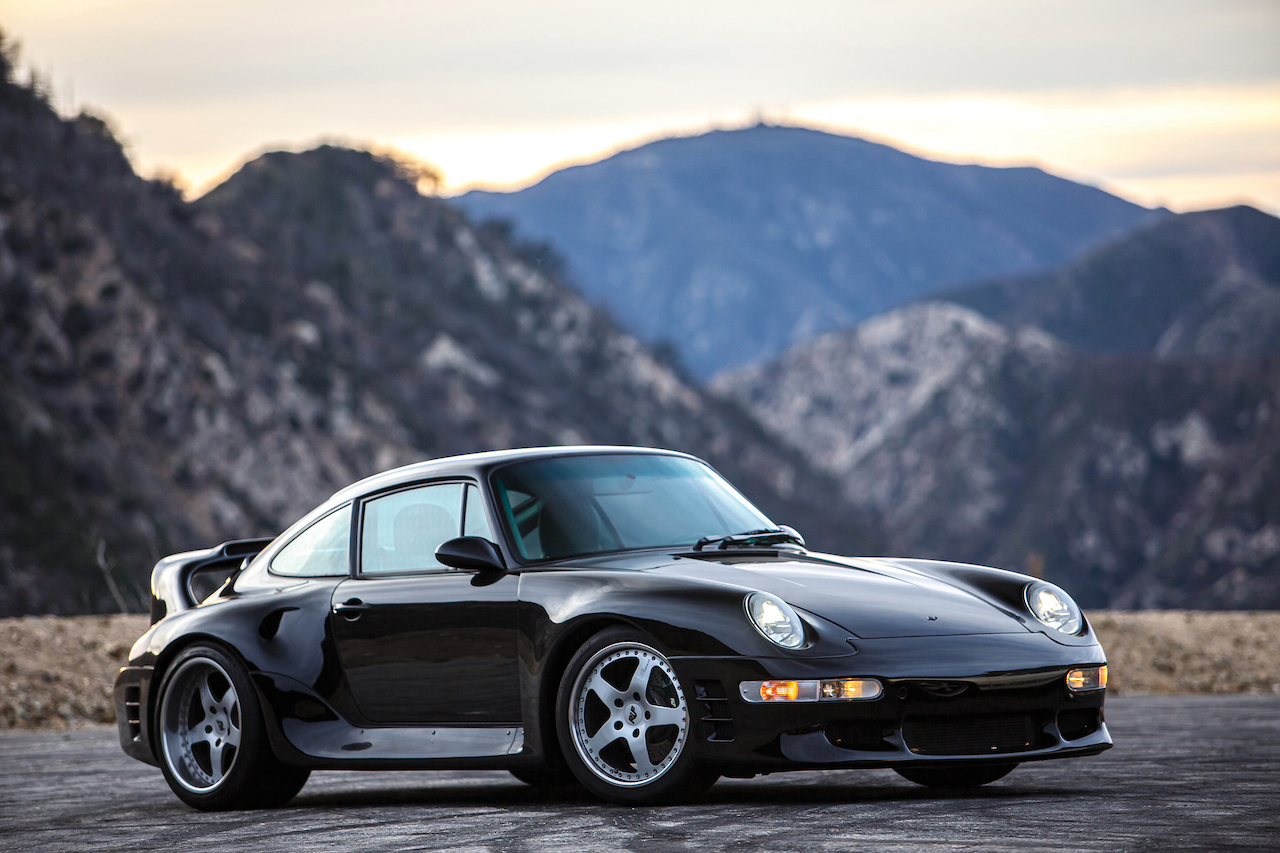 RUF made its name with the CTR named Yellowbird when that car broke through 200 mph in 1987. It became a household name with gamers when Porsche licensing issues put the cars into Gran Turismo. The CTR2 was based on the next-generation of 911 from the original. The 993. The height of air-cooled Porsches. The CTR2 made 520 hp and could send it to all four wheels. This is one of just four CTR2s fitted with a Porsche Motorsports-derived AWD system. It also got kevlar instead of standard steel panels.

One of around 15 Sport models, it got even more performance. 580 hp instead of 520. With wider fenders for bigger brakes and tires and a more track-focused suspension. This one has just 17,000 miles since conversion to CTR2 spec and recently saw a mechanical and cosmetic refresh. 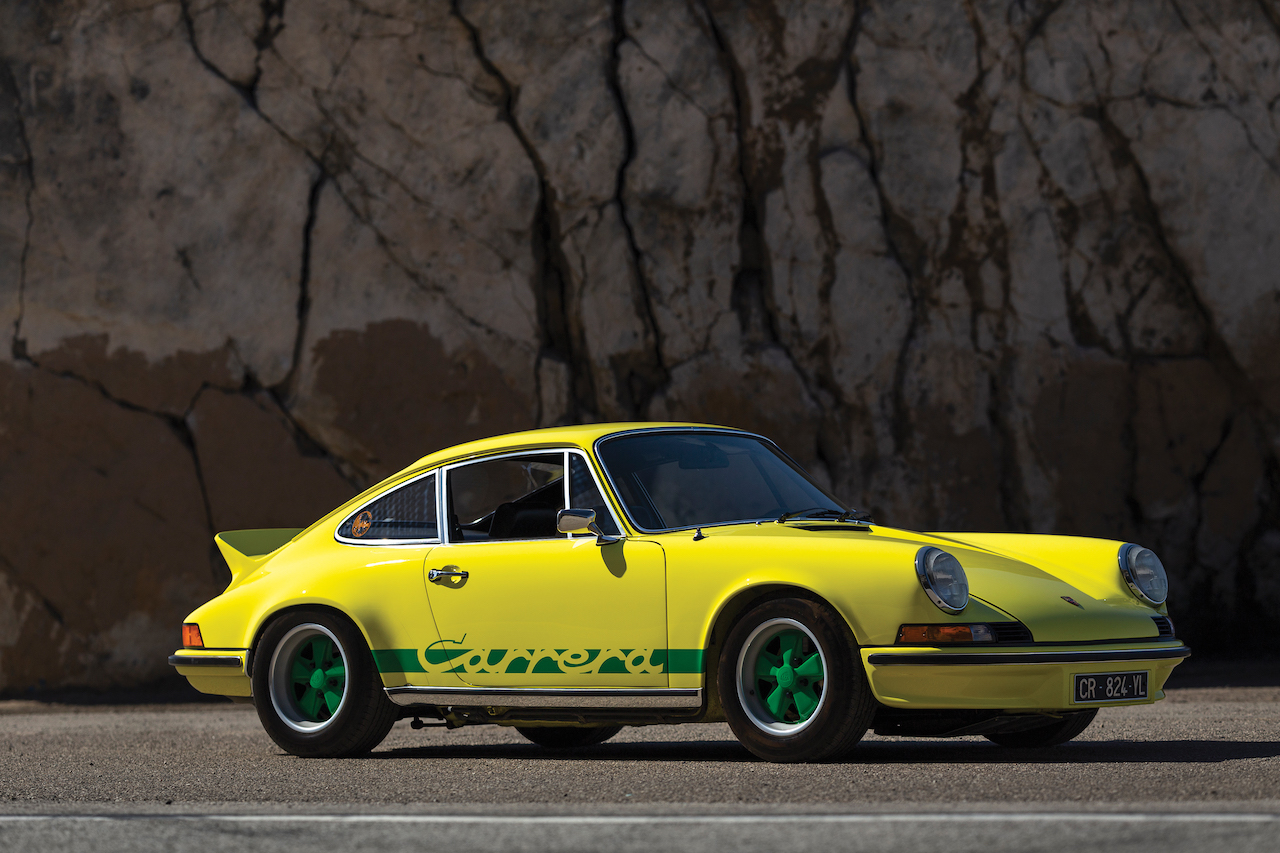 This Porsche’s lemon-lime colour scheme is enough to get it on this list. That’s the factory colour, too. They call it pale yellow, though we wouldn’t agree. Sold originally in Italy.

But this is no ordinary 911. It’s a Carrera RS 2.7. That’s the larger engine model that Porsche dreamed up to compete in FIA sports car racing. The 917 prototypes had been pushed aside with new displacement rules, and the 2.4L 911 S wasn’t enough to compete.

So it got a larger engine, more power, larger wheels, and that classic duckbill rear spoiler. This one, like many of the RS models, was in Touring spec. Which means instead of a stripped-out race-ready interior, it came with the luxury trimmings of the 911 S. 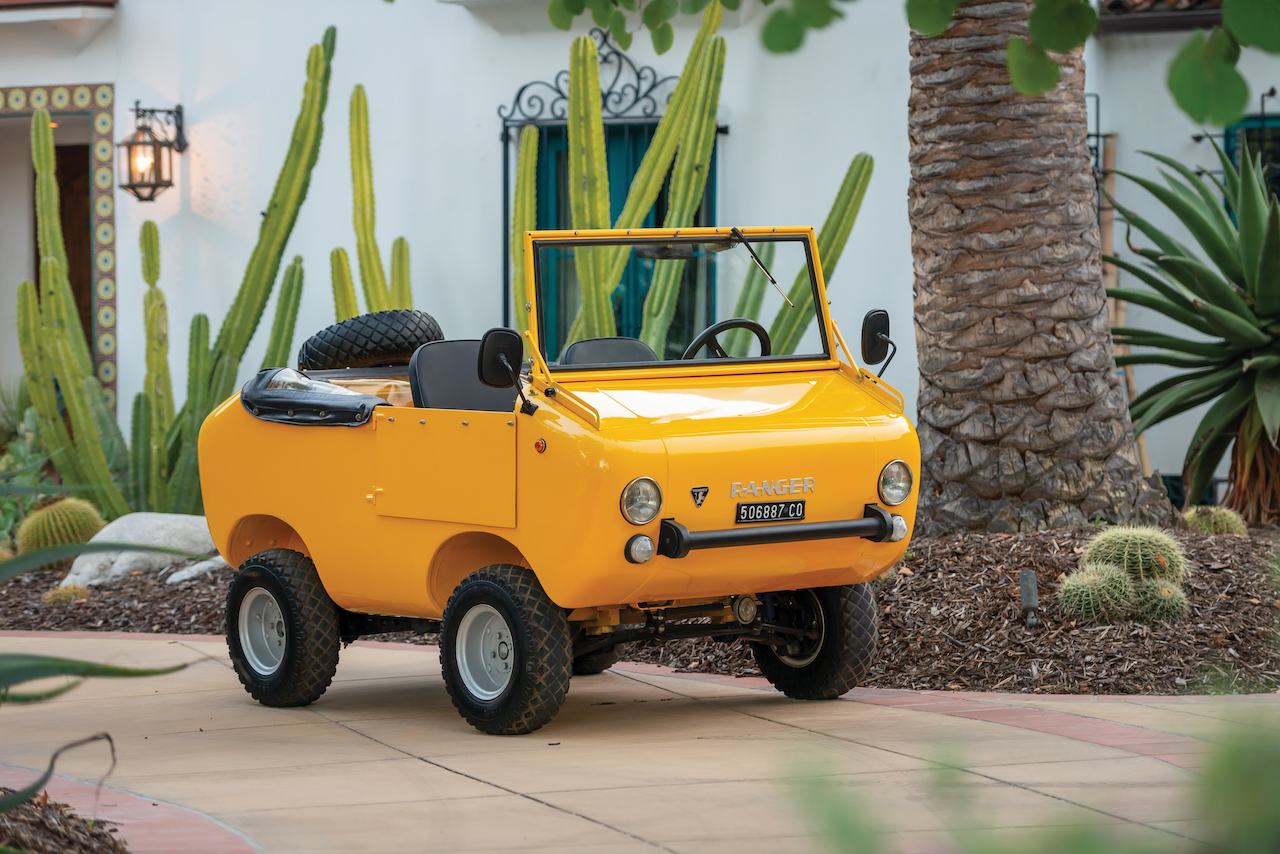 Everybody is excited for the return of the Ranger, right? Ok, maybe this isn’t what they were thinking about. But this is an amazing and amazingly small little runabout.

It was revealed at the Turin show in 1966 as a very Italian take on the off-roader. It was designed by a Ferrari, but not that Ferrari. It used parts from the Fiat 500 and 600, like the rear-mount 18 hp engine of the 500 and the independent suspension of the 600. You could get two or four-wheel drive, but this one had two.

The company made about 600 of the cars, and it’s believed that fewer than 50 remain. Maybe it won’t go literally anywhere, but we’re guessing that if you couldn’t clear an obstacle you could probably just pick it up and carry it over. Yes, it’s road legal. 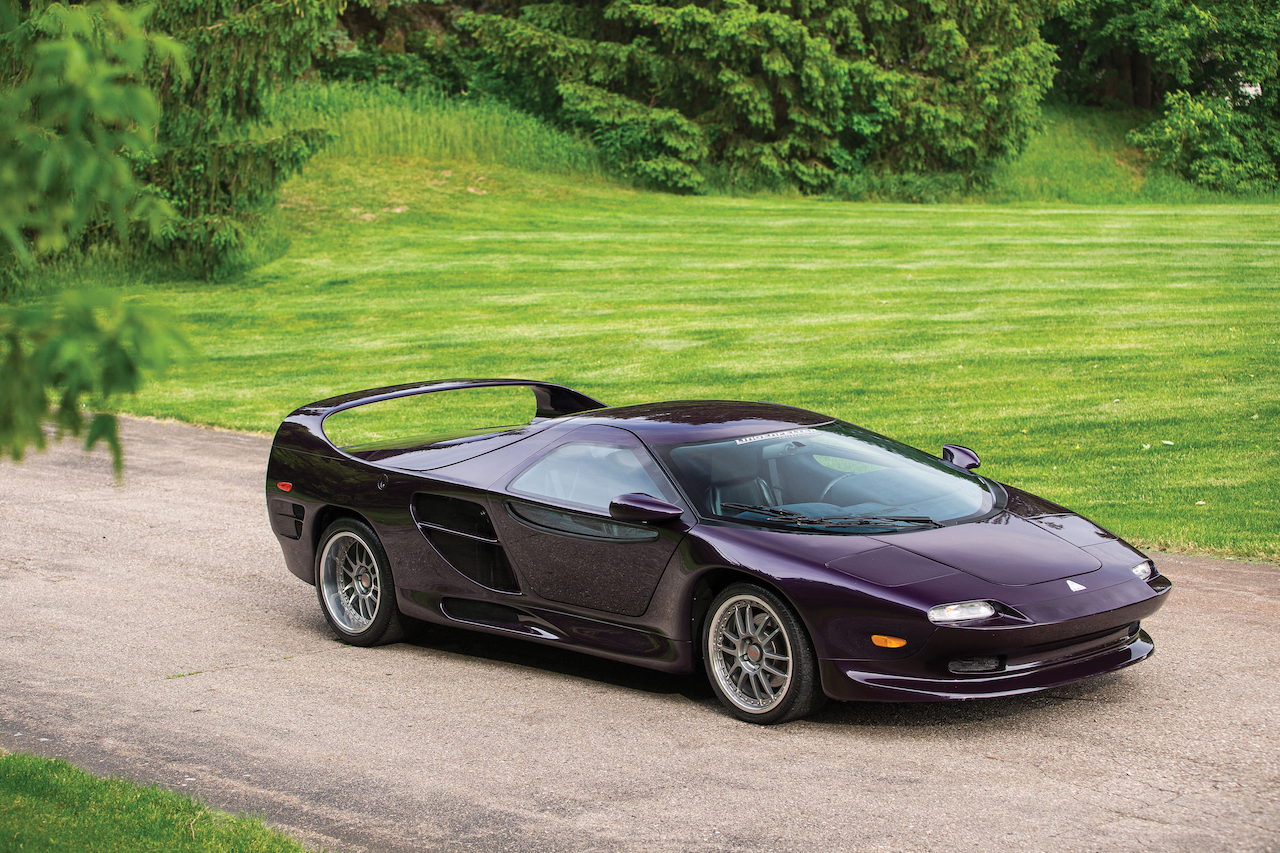 Ahh, the Vector. A surprisingly modern-looking supercar for a model that debuted in 1996. Vector Aeromotive was the brainchild of Jerry Wiegert. The same engineer who designed the oh-so 1980s W8.

Underneath, this was a Lamborghini Diablo. Because the same company owned both at the time and wanted to expand volumes. That meant it also got the 5.7L Lamborghini V12 and 492 hp.

While it looked great, and probably went great too, only 17 were ever built. And three of those were prototypes. This is the fifth built and the only purple one. 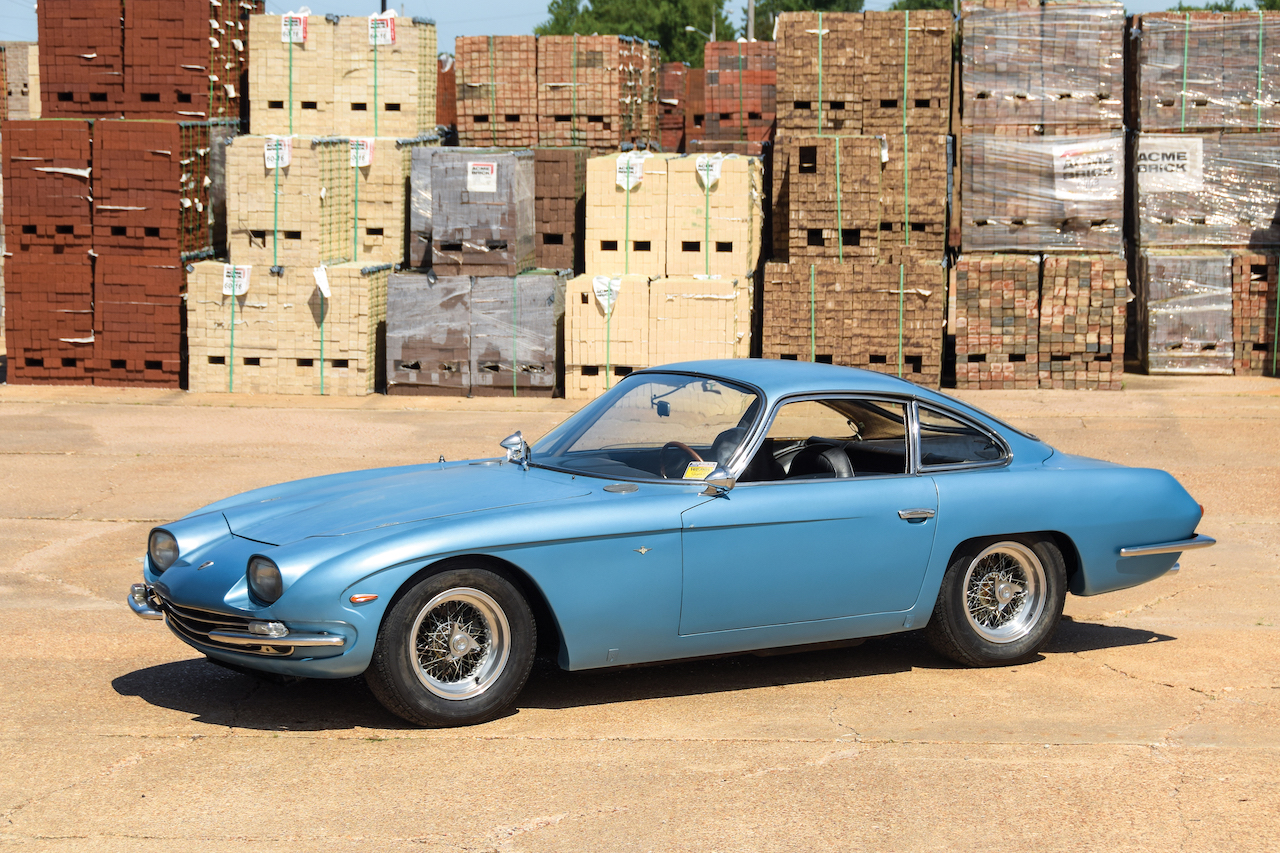 The 350 GT was the first production car built by Lamborghini. After the tractor maker took offense to Enzo Ferrari’s customer service. This was a Grand Tourer, not a racer like Ferrari.

The company realized that the original Bizzarrini engine was a bit high strung for road car use. After all, the 3.5L V12 made its 400 hp at 11,000 rpm. So it was detuned to 270 hp, but said to be much more reliable. And easier to drive.

Just 120 350 GTs were built, with styling by Touring and a chassis from Dallara. This is believed to be one of the last 350 GTs built.

It’s a mostly unrestored car. The original engine was replaced at some point with a 320 hp 4.0L V12, and in the 1970s or 1980s, the seats were reupholstered. With corduroy. But other than that, it’s quite original. It’s had some important work completed, like overhauling the fuel system and braking system, but is still largely the way it was back then. 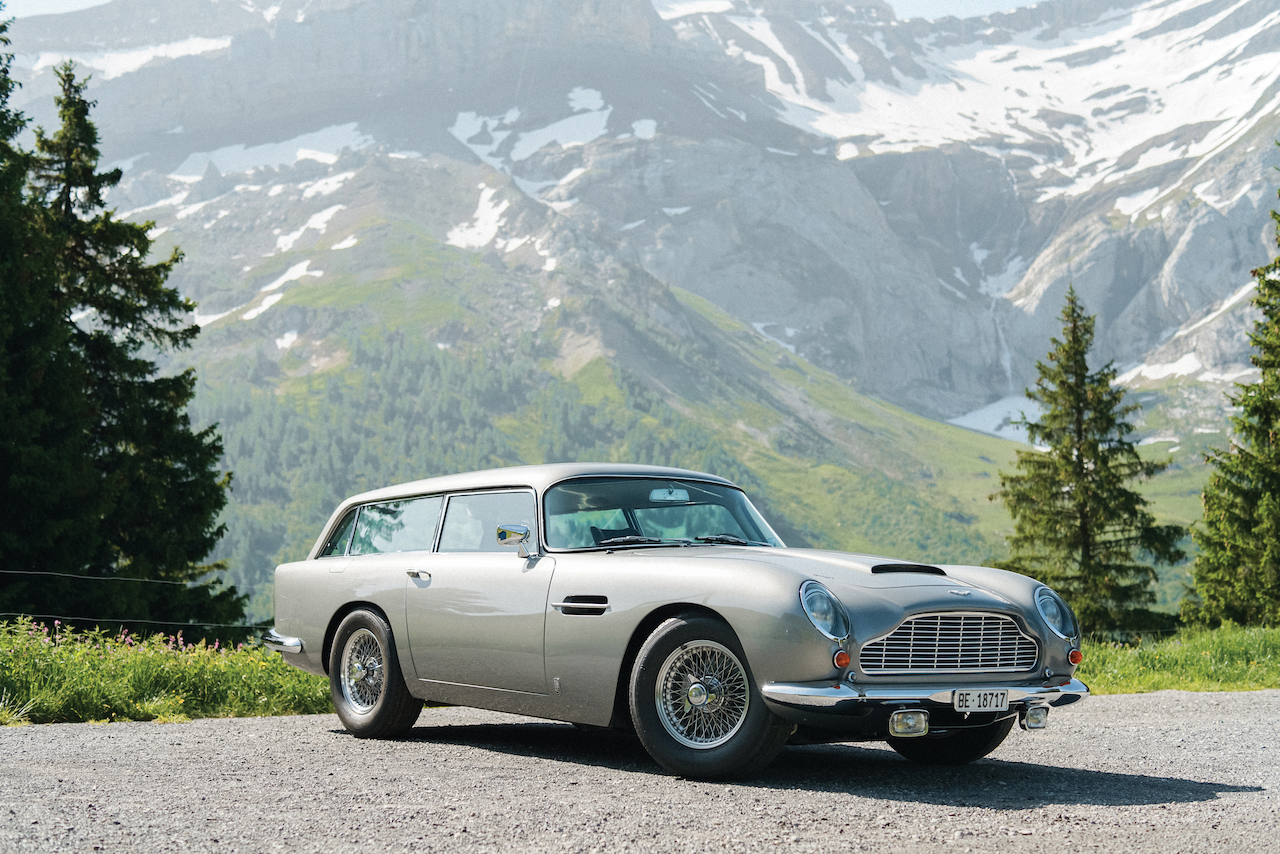 Yes, yes, it’s another DB5. But we told you they were featuring Aston this year. And just look at this one. It’s like no other DB5 we’ve ever seen. A Shooting Brake.

Turns out that David Brown, the DB in DB5, wasn’t happy with his company car. His polo gear didn’t fit. His hunting dogs were chewing the seats. You know, real problems! So he is said to have brought his dog into a meeting, plopped it down on the table, and said: “build me something for him to sit in.”

So was born the DB5 Shooting Brake by Radford. Because the Aston works didn’t have the time to build these special cars. Brown asked Harold Radford’s coachbuilding company to help. And help they did.

Just 12 were built, and only four, like this one, in left-drive.

The listing says that one of these cost double the average British home. But it offered 1,140L of cargo space. Take that, crossovers.

This one’s been in Switzerland since new, with just three owners. In 2003, it was factory upgraded to the 4.2L inline-six, and a five-speed automatic was fitted. In 2009, it was upgraded again. To 4.7L. And it was repainted in its original colour. 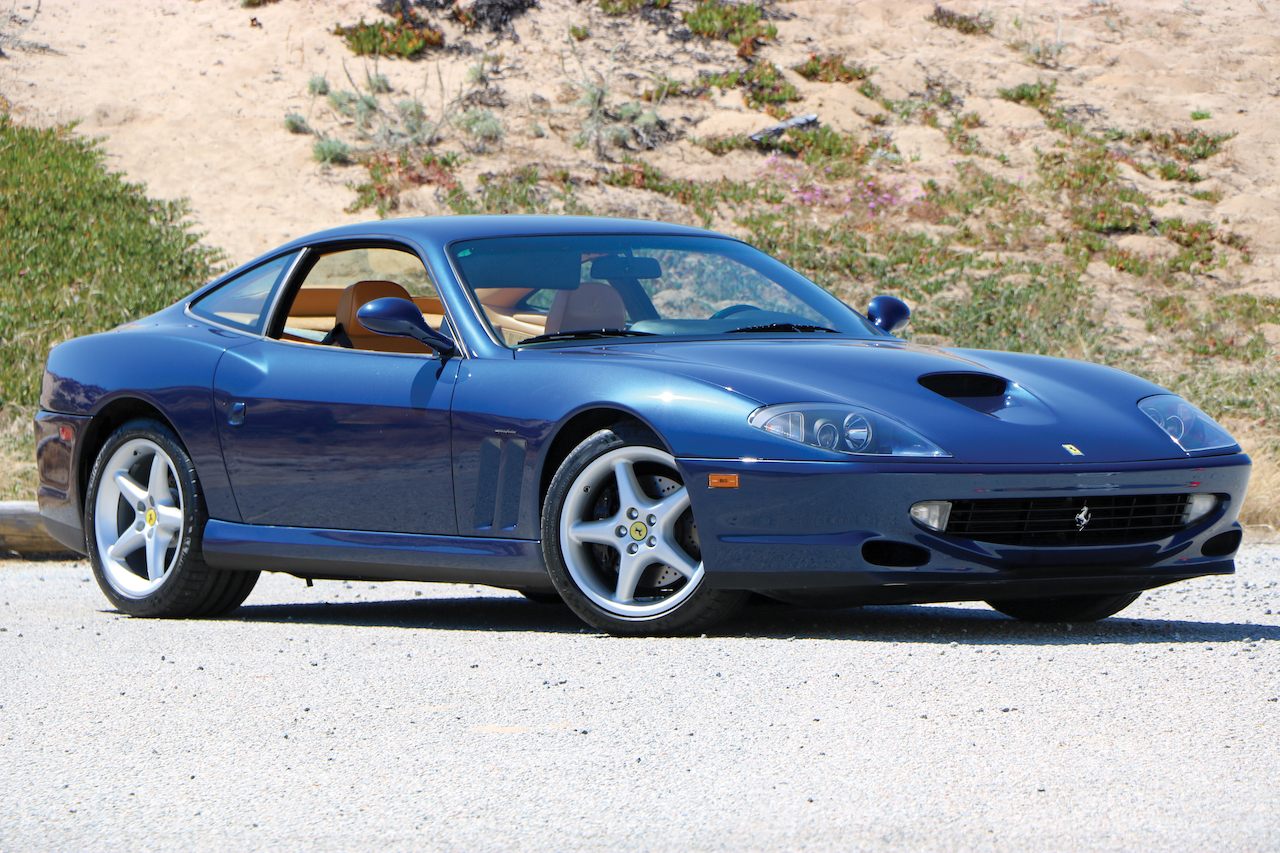 The 550 Maranello was the return of Ferrari to the front-engine, V12, two-seater. The replacement for the hopelessly dated Testarossa. With a top speed of 199 mph showing that maybe Ferrari wasn’t going to exaggerate anymore.

That 5.5L V12 screams past 7,000 rpm and makes 480 hp along the way. Maybe we have a bit of a nostalgic soft spot for the 550, but this is one of the best looking modern Ferraris, and the Pininfarina shape can hold its own among the best of the brand.

It’s a V12 rocketship with a gated manual. Just ignore the cassette deck. You can buy Bluetooth adapters to slot in there now anyway. 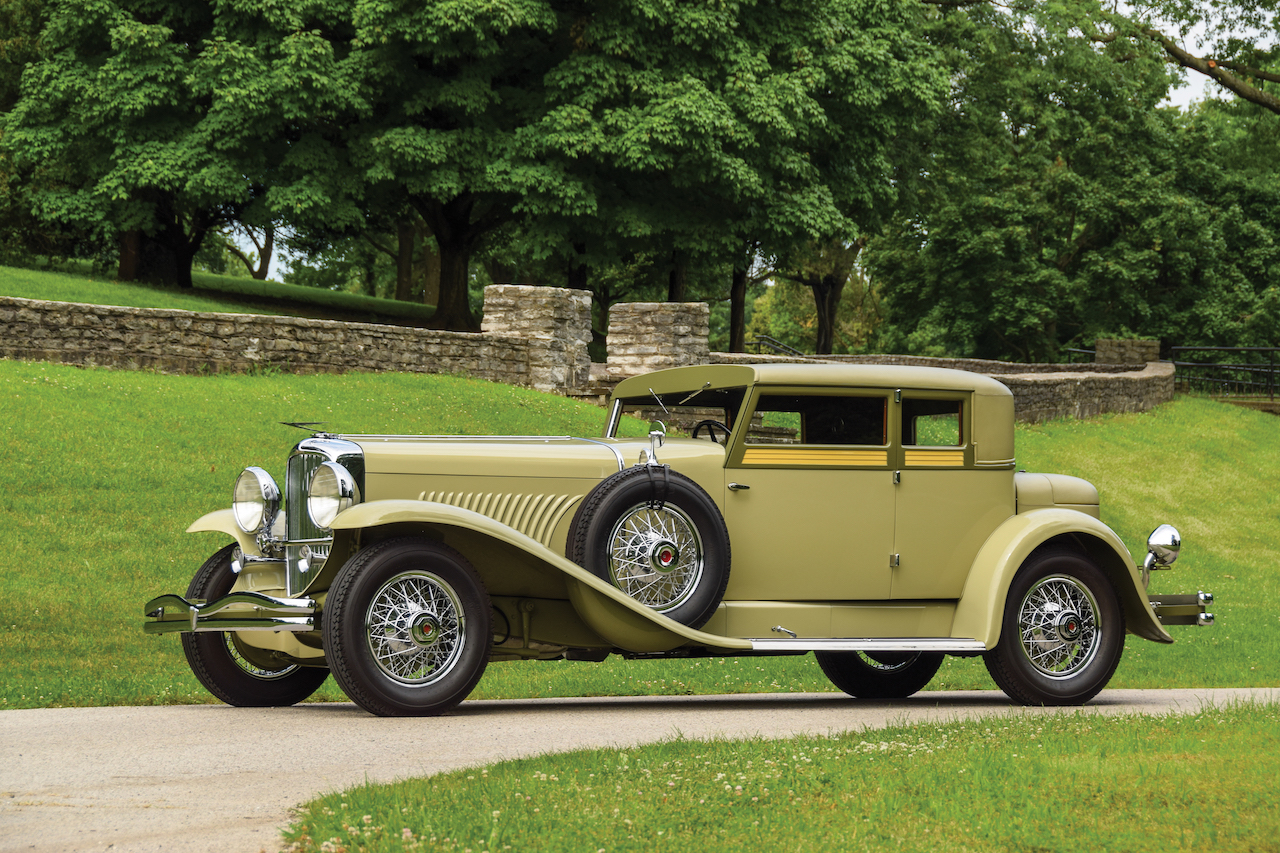 The Duesenberg Model J was one of the premier luxury cars of the era between the wars. Unfortunately for the automaker, it was released just a year before the Great Depression started. A straight-eight engine based on the company’s racers offered 265 hp and let the car hit a top speed close to 200 km/h. It was the fastest and most expensive American car offered at the time.

This was the era of buying the chassis and having a body fitted to it. This one wears the Victoria coupe coachwork, and it’s said to be one of just two. A short-wheelbase chassis with a body by the Judkins Company. It’s traded hands many times, and saw a restoration sometime between 1954 and 1980. It was restored again in the 1990s.

Today, it’s won multiple Concours trophies. And gets driven, which is even more remarkable for a car like this. Which means its a classic icon you can get out and enjoy.