Interesting, affordable safe options that will prevent you from buying the dreaded minivan.

The article I get asked to write the most is one recommending cars for new parents. That’s because everyone I know is having kids. Which is weird. These are the same people who used to not shower for an entire week while camping out at Bonnaroo and get kicked out of the same bar twice in one night.

Millennials, we’re parents now. The party is over. We have to be responsible.

But just because we’re accepting new responsibility doesn’t mean we have to accept defeat and join the herd by driving another minivan or bland crossover SUV.

We can still put some excitement in our lives while being safe and responsible.

So, here’s a list of cars that are fun, cool, practical, spacious enough to get a car seat into and, above all else, very safe. Because that’s important to you now.

On the safety front, I’ve chosen cool cars and SUVs which have earned top marks from the Insurance Institute for Highway Safety (IIHS) for their “crashworthiness”. 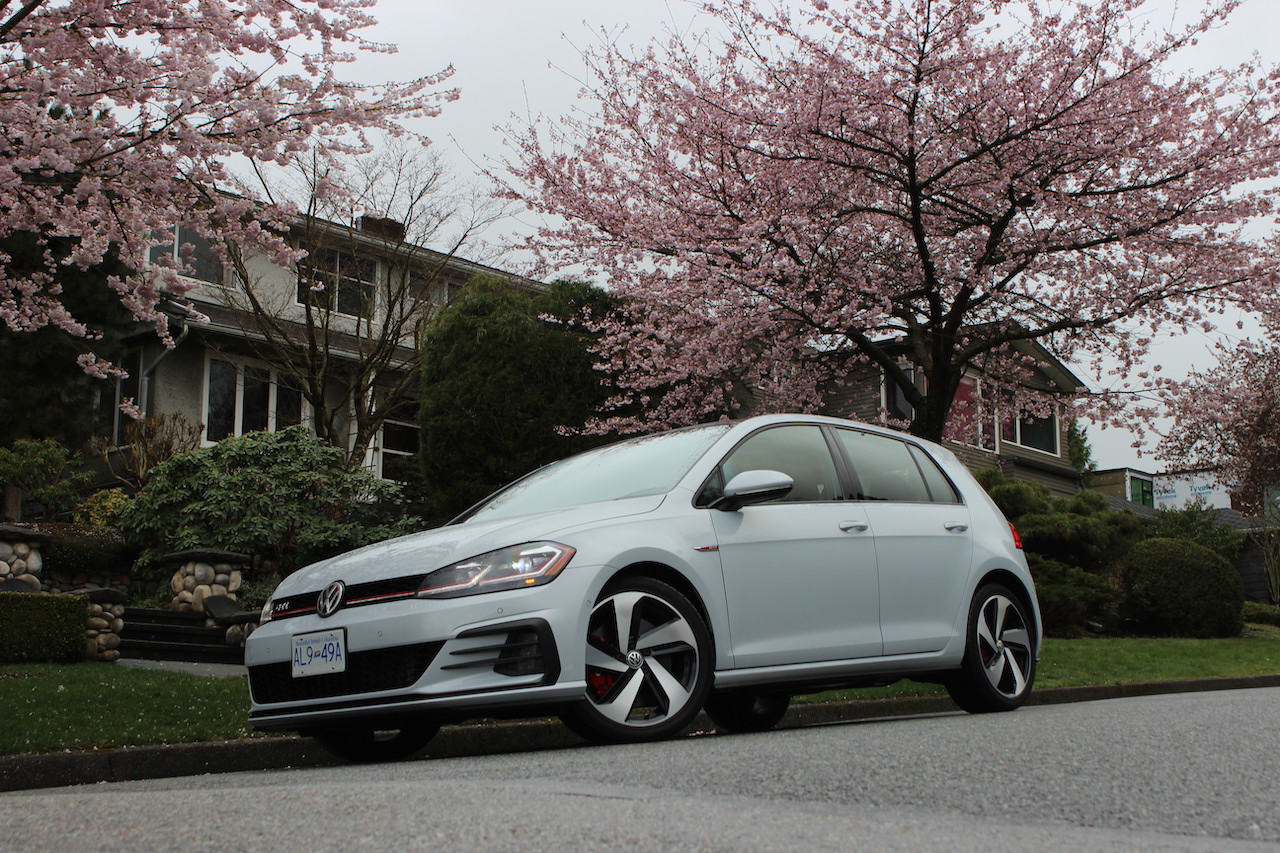 The granddaddy. The classic. The obvious choice. The GTI is the first, and arguably still the best “have-it-all” car (at least, for the money). Offering 228 horsepower from the familiar VW 2.0-litre engine, the GTI stays close to its ‘hot-hatch’ roots by offering a six-speed manual transmission as standard. It also receives top crashworthiness and child seat anchor marks from the IIHS, and is even a Top Safety Pick when equipped with the correct headlights. It’s also a bargain starting under $31,000. 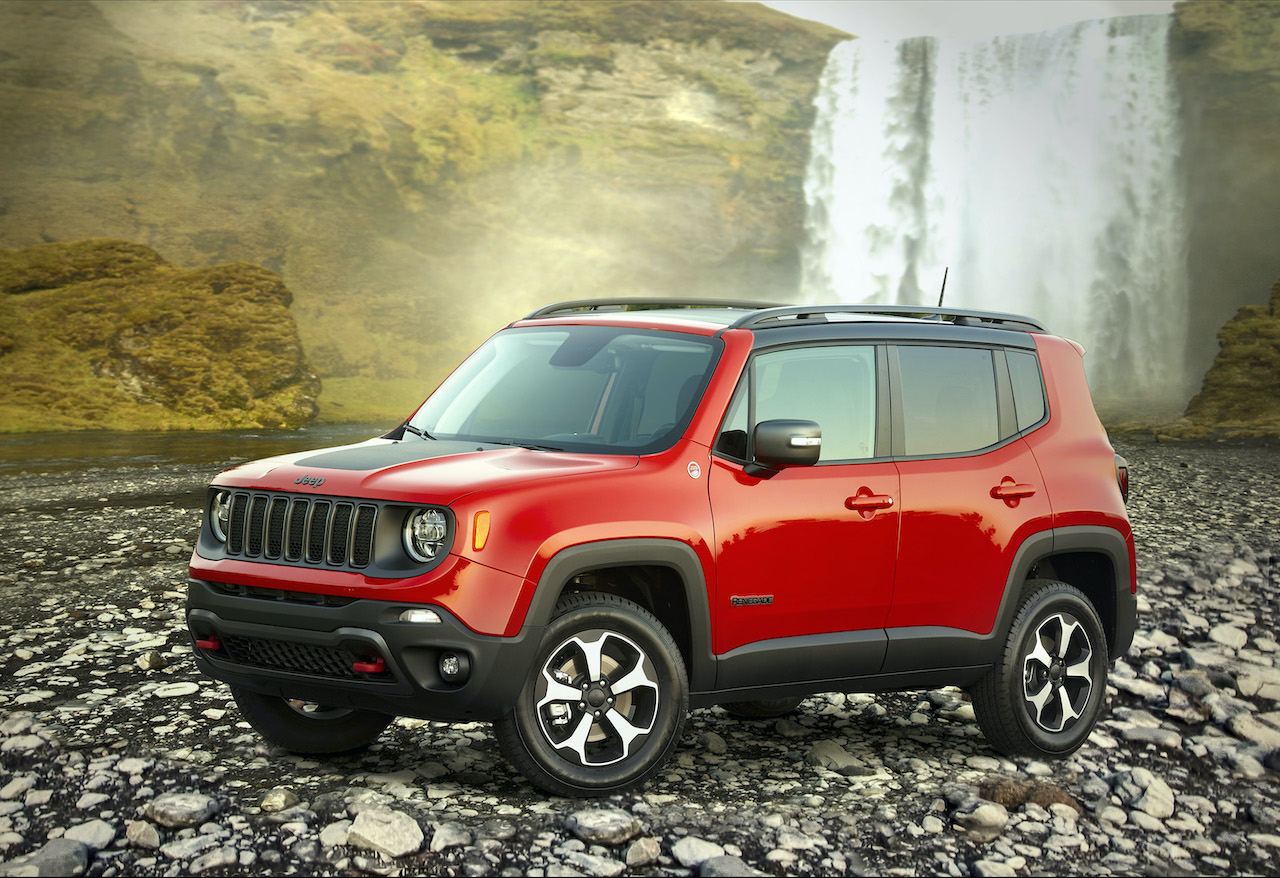 True, crossover SUVs are becoming ubiquitous and boring. But I don’t think the same can be said for the Jeep Renegade Trailhawk. It’s rugged styling and stance make it appear as if it’s actually a bigger, tougher SUV than it really is. And it’s boxy silhouette prevents it from blending in with its other overly round and smooth competition. Its tiny 1.3-litre engine may only make 177 horsepower and 200 lb-ft of torque, but the Trailhawk is nonetheless officially trail rated with a proper 4×4 system. The Renegade model is also an IIHS Top Safety Pick when equipped with optional front crash prevention and specific headlights. 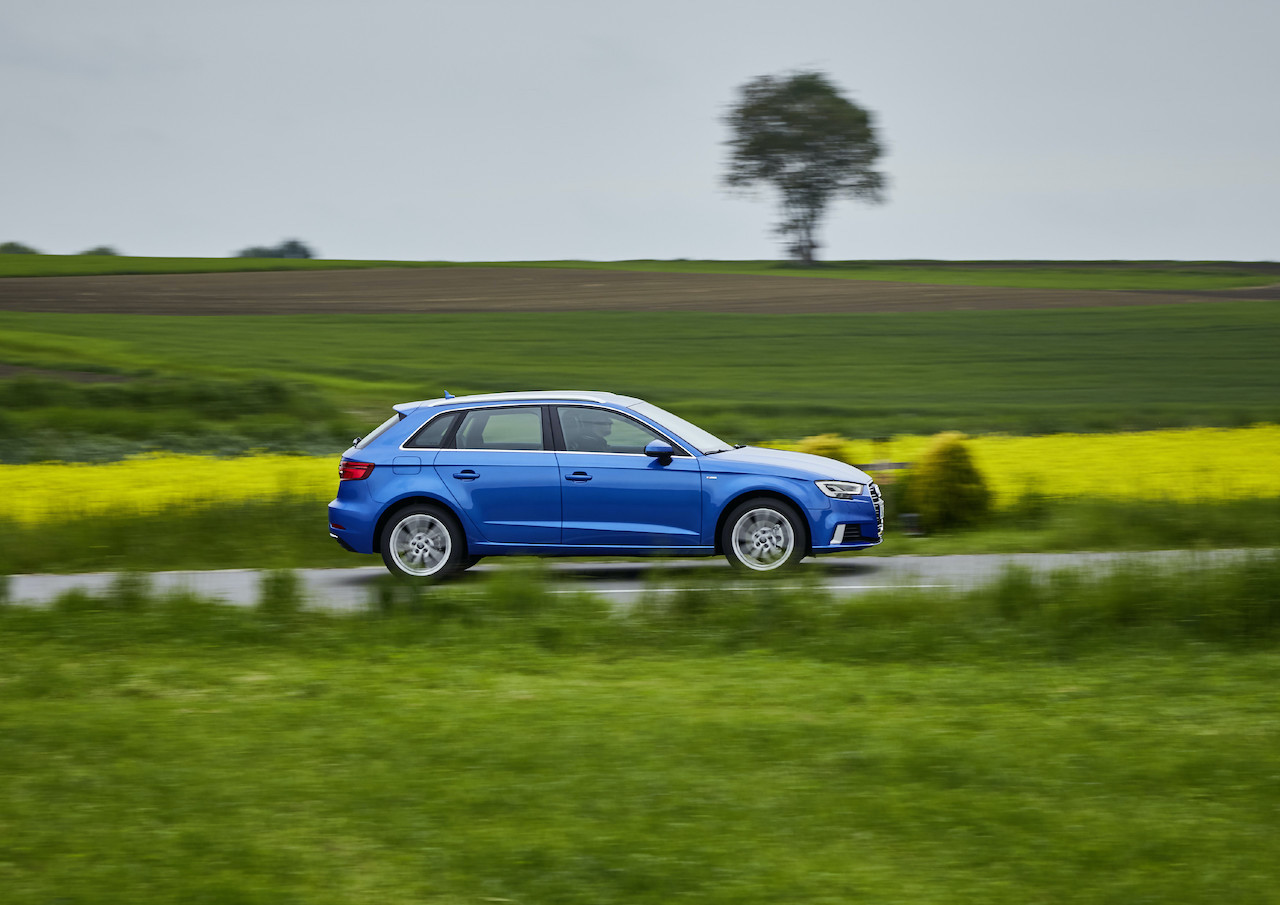 The Audi A3 just might be the best bargain from the big three prestigious German badges at the moment. While it uses the same 228 horsepower 2.0-litre engine found in the Golf GTI, the Audi A3 differentiates itself with an up-trimmed interior, a 7-speed “S Tronic” transmission and the infamous Quattro all-wheel drive system. It’s one of those cars that makes you look richer and classier than you are, without actually being obnoxious in any way, mostly thanks to its small stature. The A3 also earns top safety marks. Although it should be noted that its child anchors only received an “Acceptable” rating. 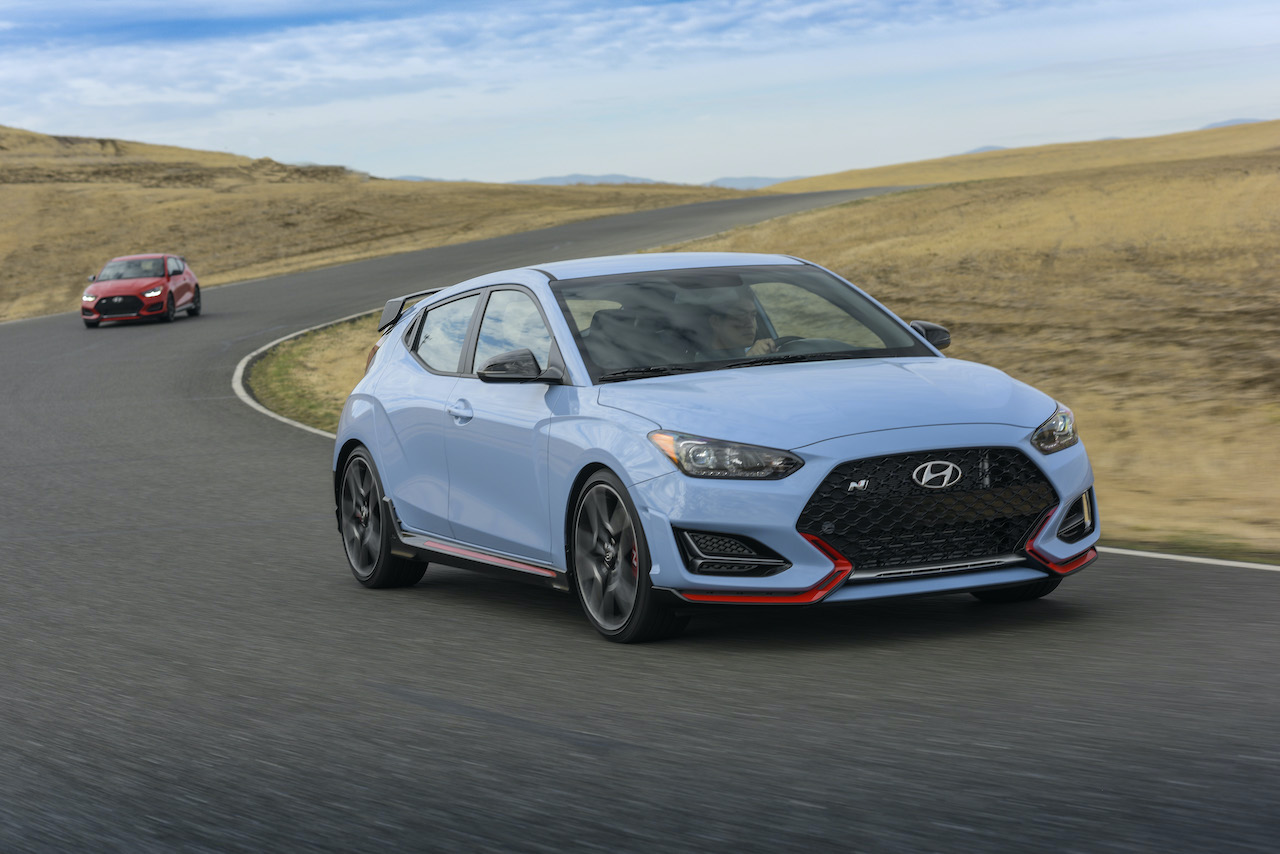 Much ink has been spilled over the performance merits of the Hyundai Veloster N. With its 2.0-litre, turbocharged engine making 275 horsepower, Hyundai is aiming the Veloster N directly at the hot hatch establishment of cars like the Honda Civic Type R or even VW Golf R. However, it should also be noted that the Veloster receives a very high crashworthiness safety mark, making it an easy choice for a new parent. Sure it’ll be a pain to get a car seat in and out of. And “N” is the least exciting sounding performance badge of all time. But on the upside, you’ll be able to have some fun between daycare pick-ups and drop-offs thanks to high performance brakes and suspension, as well as a six-speed manual transmission. 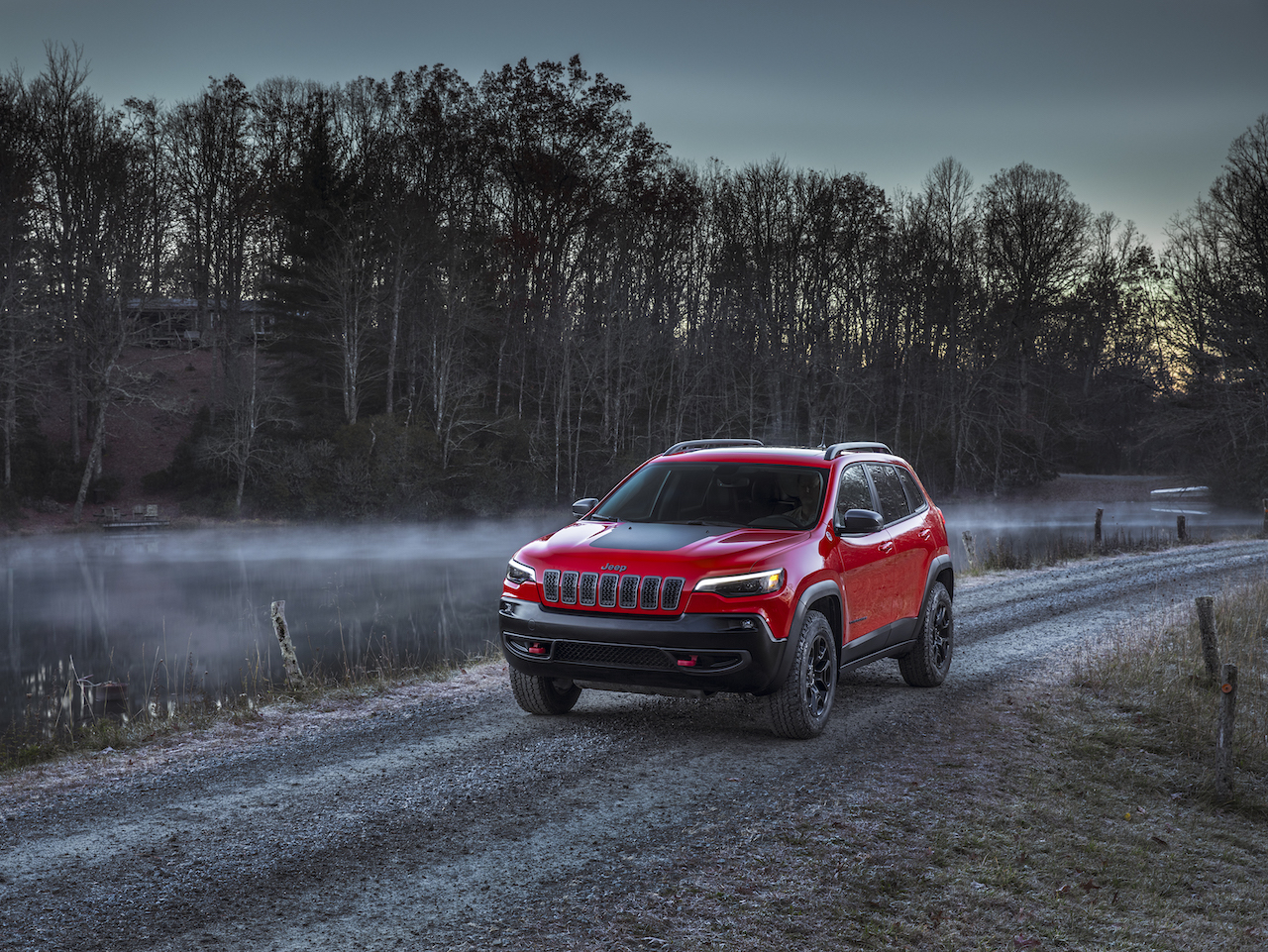 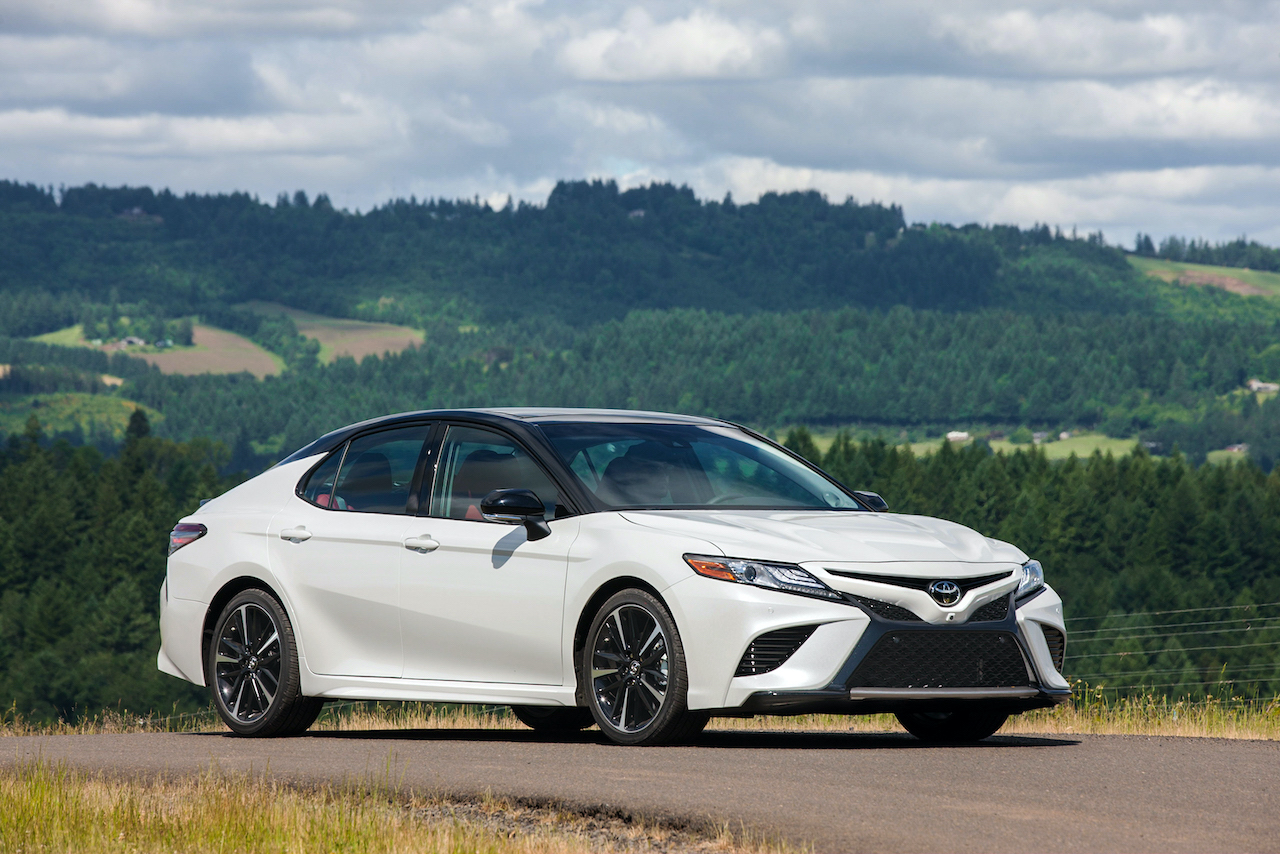 In years passed, the Camry was the very definition of boring. But times have changed. The new Camry is a striking thing with its sharp angles and sweeping curves. It looks, dare I say, aggressive. With a TRD package, those elements are all turned up with a body kit, rear wing, dual exhaust and black chrome rims. It’s even packing a respectable 301 horsepower under the hood. But, it’s still a Toyota Camry, which means it’s very, very safe. 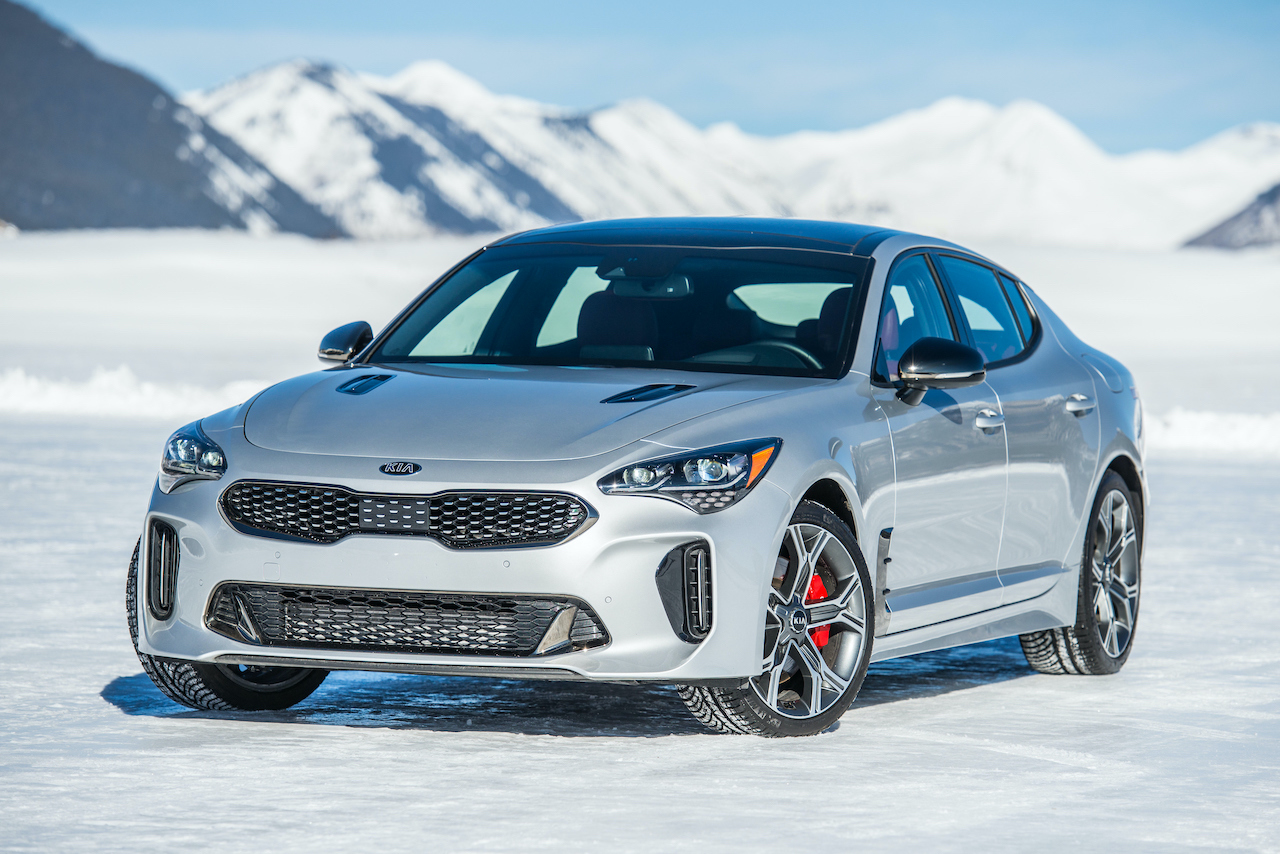 The Kia Stinger is many things. Striking. Unexpected. Arguably good value for money. And yet still a tough sell with the emotionless “Kia” badge plastered all over it. But, if you’re not one to fuss over the prestige of a badge, there’s some good fun to be had with the Stinger. Its 365 horsepower 3.3-litre twin turbocharged V6 propels the Stinger GT to 100 kmph in under 5 seconds. Get yours with optional front crash prevention and specific headlights and you’ve got a certified Top Safety pick. And hey, maybe the lack of a familiar badge will be a good conversation starter. 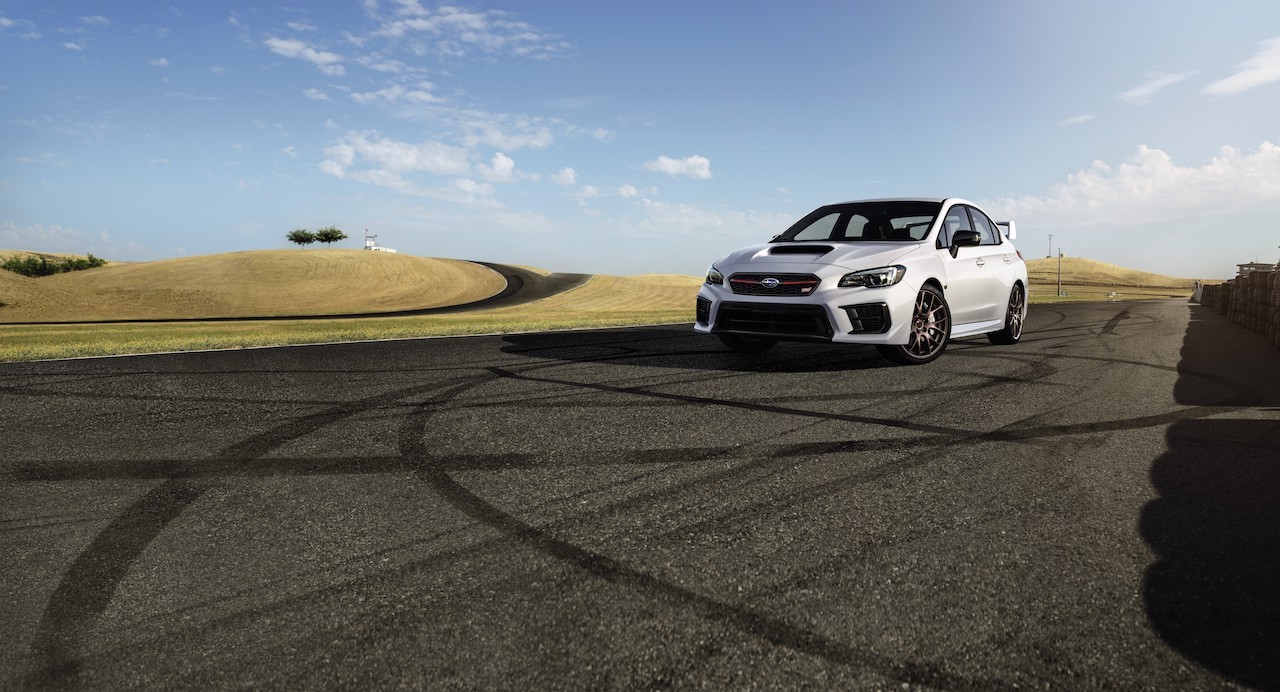 Nothing says, “I refuse to be a complete grown up” quite like a Subaru WRX. While the STI trim doesn’t quite obtain all the safety awards as the down-trimmed WRX models (you’ll need the optional CVT transmission for the front crash prevention option), it’s crashworthiness still receives high marks across the board. Which is good. Because that means you can still enjoy the STI’s track-tuned suspension, 310-horsepower turbocharged boxer engine, face-ripping 6-piston Brembo high-performance brakes and “refuse to be a grown up” Recaro seats. You’ll also get a lot of thumbs up from young people—offering you precious reassurance of your continued relevance. 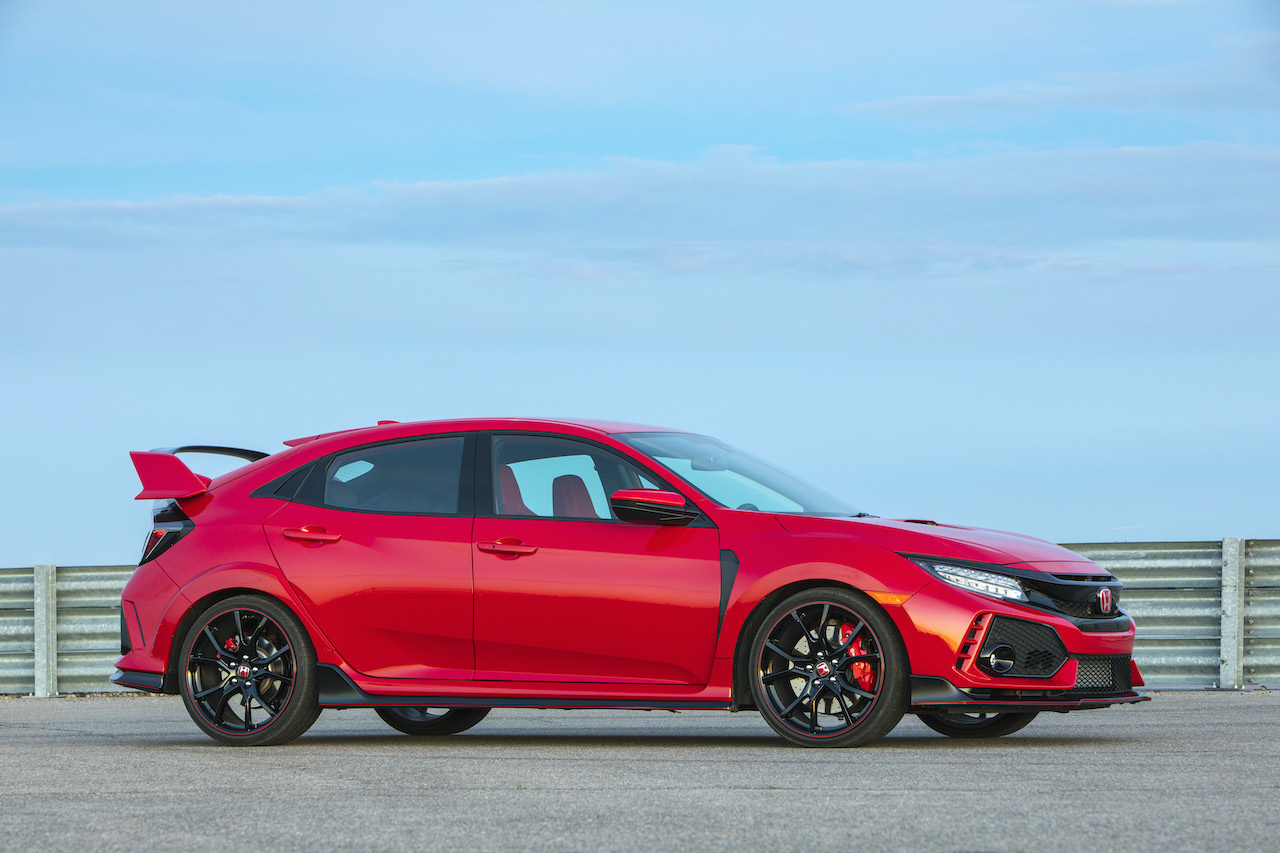 The Honda Civic didn’t receive a Top Safety Pick in 2019. However, this current generation has received high praise in past years for its safety features, and the 4-door hatchback model, which the Type R is based off of, continues to earn high marks. Like the Golf GTI, the Honda Civic Type R is one of those “have it all cars.” It’s as much a docile daily driver as it is a rev-happy, corner-carving hot hatch. The looks are a little juvenile (especially the red front bucket seats), but in this case, that’s a good thing. 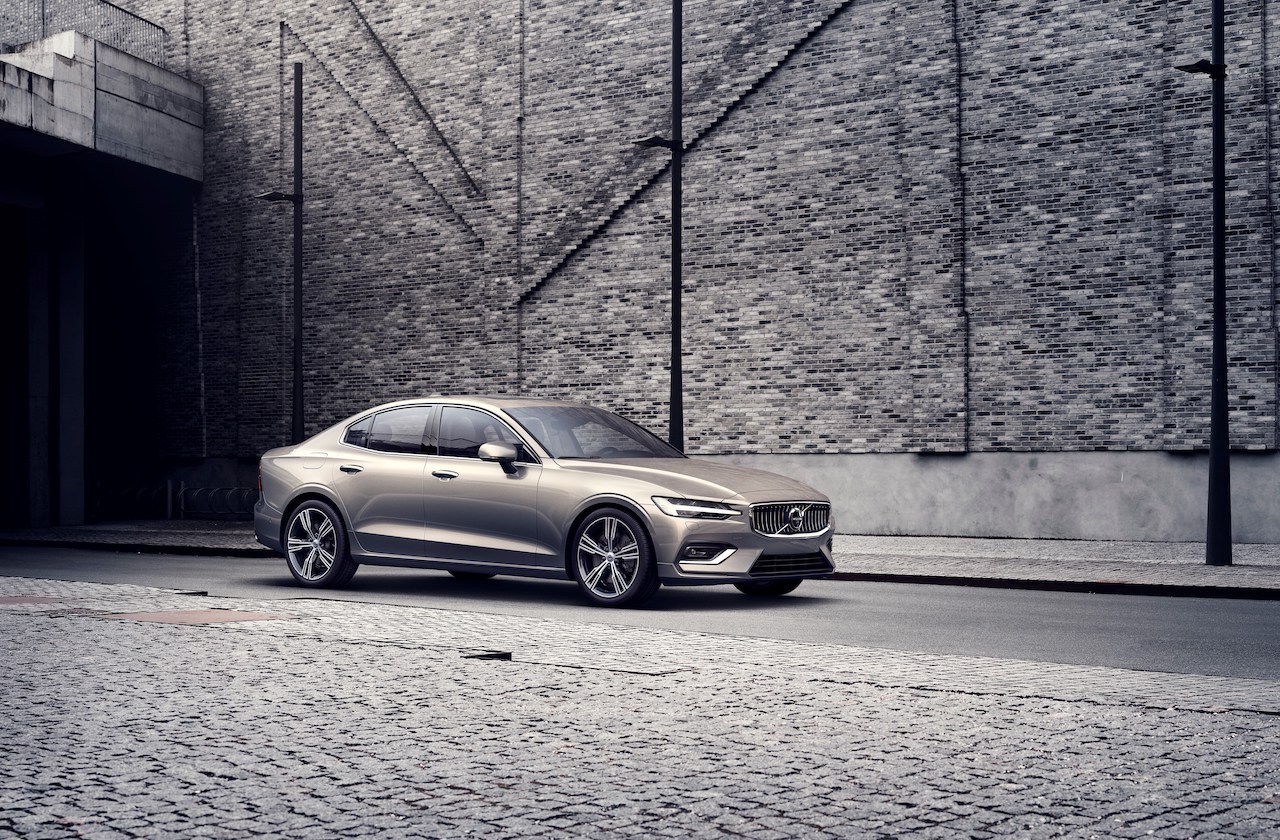 The fact that a Volvo is very safe is a joke so old it’s not even worth telling. What’s seldom discussed is just how cool the Volvo S60 actually is. Besides being rare on the road compared to BMWs and Mercedes, there’s something supremely confident about the S60’s reserved and certain styling. It’s not shouty or pompose in anyway. It’s like wearing a clean, black, well-fitting suit all the time. Then there’s the power. While the standard option S60 packs a modest 250 horsepower, a well-optioned car will bring the power output up to 316 horsepower. Powerful. Effortlessly cool. A conversation starter. Peace of mind with a baby on board.