There are a lot of ways to have fun on a budget.

Life is too short to not own a fun car. Anyone who has ever told you otherwise is most likely either a boring person or someone who has never driven a sports car.

The trouble is, if you already have a daily driver for your commute to work, or you’re paying unreasonably high rent prices to live in a city, the prospect of owning a car which only serves the purpose of being fun may seem like a luxury you can’t afford.

Luckily, there are plenty of great options in the used car market which are obtainable on a budget of about $10,000.

And you don’t have to stick to the strictest definition of “sports car”, either. You can open up your search to just about any car you would own solely for the purpose of having fun. From yesterday’s prestigious grand tourers, to muscle cars, proper sports roadsters, tunable project cars and even a 90s legend you wrote off as out of reach, there are a lot of ways to have fun on a budget.

While a brand new G35 coupe with a 6-speed manual transmission would have set you back somewhere in the ballpark of $50,000 back in 2006, the Canadian Black Book now puts the average asking price right around $10,000. 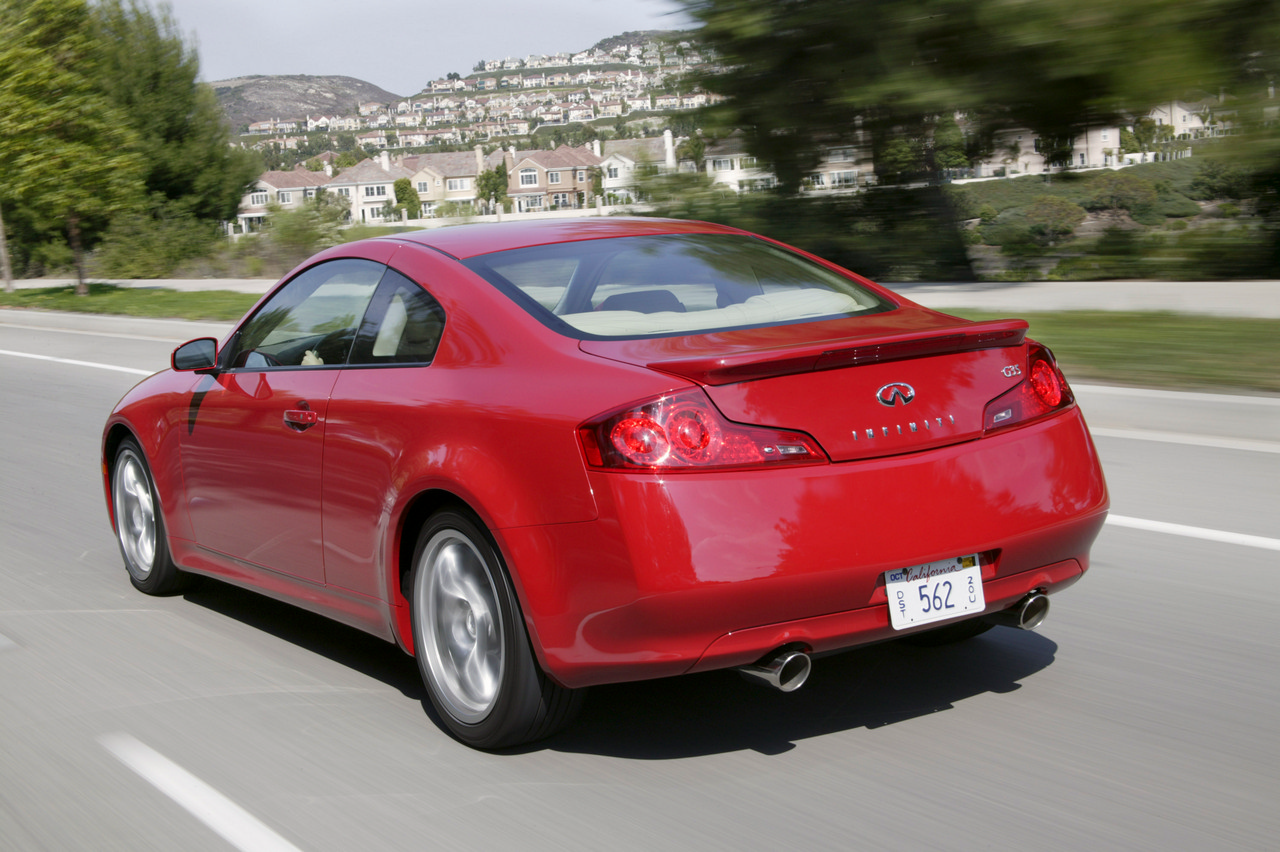 The Infiniti G-series has always been pegged as nothing more than a Nissan Z with a back seat. And that stands to reason when you consider they sport the same drivetrain—this generation being powered by Nissan’s 280-horsepower, 3.5-liter V6 engine. But the G35 doesn’t need the Z connection to claim its cool factor. Why? Because the Infiniti G35 was actually branded as the Nissan Skyline in Japan. Yeah, that Skyline. Don’t believe it? Just take a good look at the tail lights.

Even though it was around for a decade, it’s very easy to forget about the S197 Mustang—especially the pre-Coyote, 3-valve, 4.6-litre cars. We now live in a world where a four-cylinder base Mustang puts out more horsepower than it’s GT counterpart did from a previous generation. 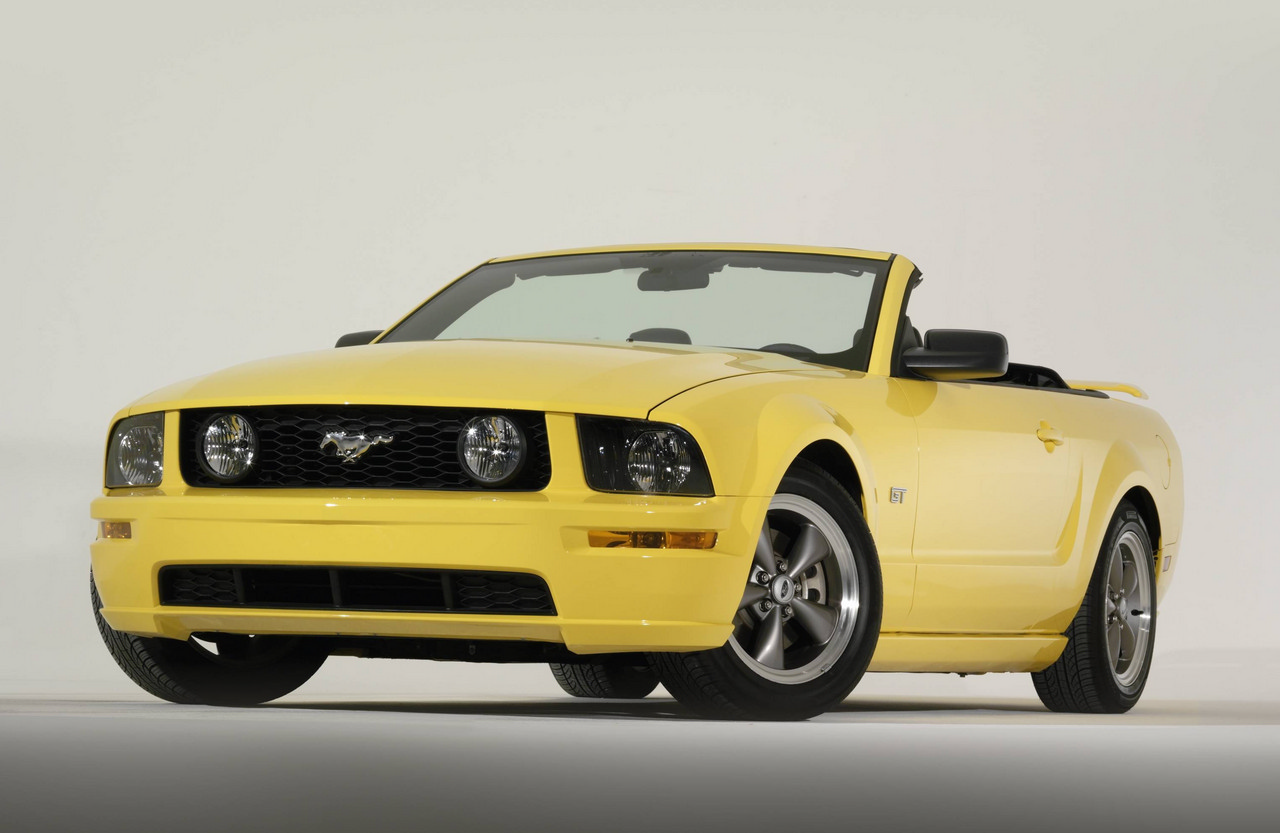 But it’s perhaps because the 4.6-litre is so yesterday’s news that the Canadian Black Book now puts the average asking price of one these cars just a smidge over the $10,000 mark. With a little bit of shopping and some solid negotiating, you can have a proper rear-wheel drive muscle car, complete with V8 noises. As for the power deficit between this car and the newer Mustangs… just be honest, you were looking for an excuse to install a supercharger anyway.

The Black Book puts this one just around $12,000, but you’ll find plenty of listings for well under your $10,000 budget. That’s probably because owning an RX-8 is the world’s most annoying way to have a lot of fun. Sure, taking the RX-8’s 1.3-litre rotary engine all the way to its 9,000 rpm redline sounds like a good time. And it is. But what’s not so fun is dropping half a quart of oil into the car every other fuel stop as said rotary engine burns it faster than a Bluth Cornballer does flesh. 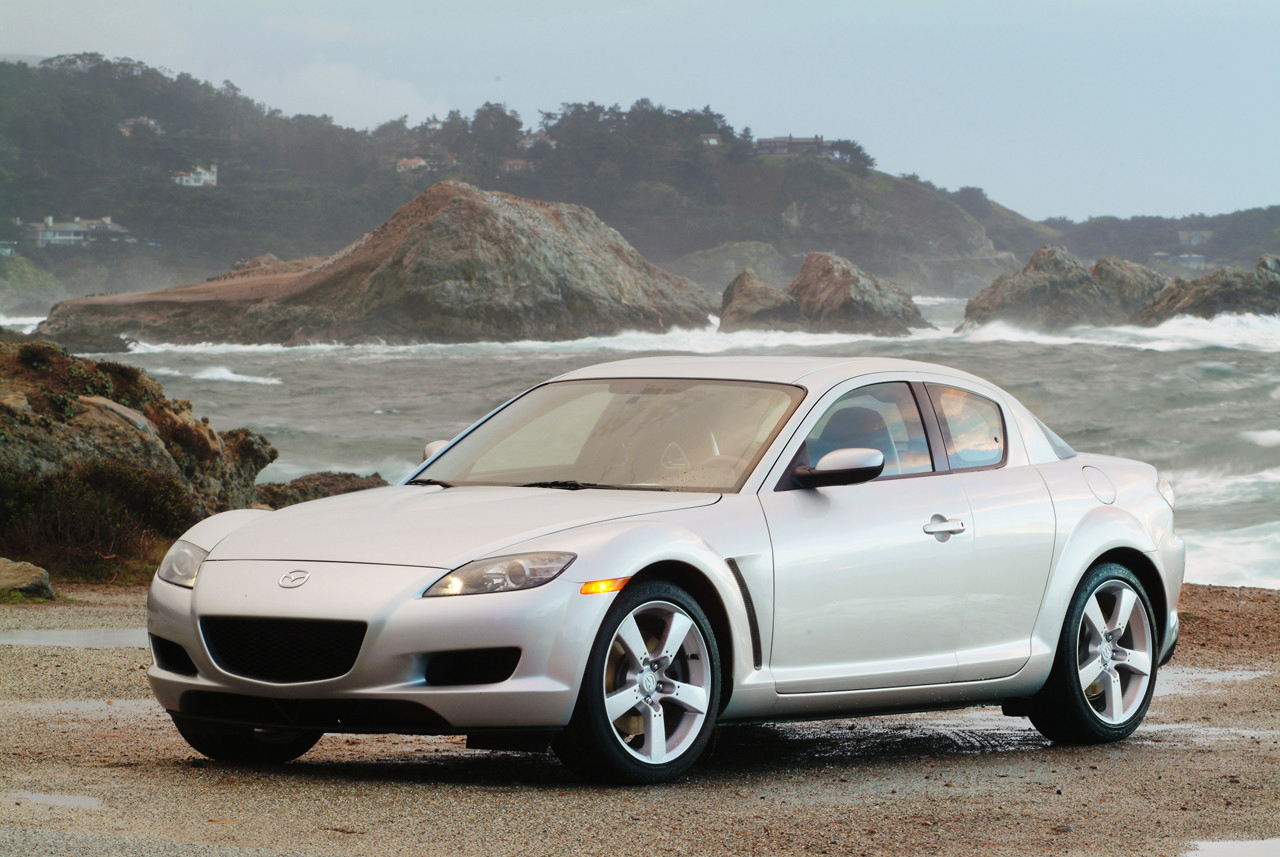 Buying an RX-8 is a little bit like getting drunk. It’s fun at first, but you’ve made an irresponsible decision and will invariably pay the price for it in one form or another.

However, if you love getting your hands dirty and diagnosing obscure and totally unique issues, then the RX-8 is for you.

There was a time when owning a Mazda MX-5 would earn you a steady stream of hazing from your friends… and also probably some strangers. However, the car community has become more exposed to the simple and pure joys of a light, high-revving, 170-horsepower, rear-wheel drive roadster. 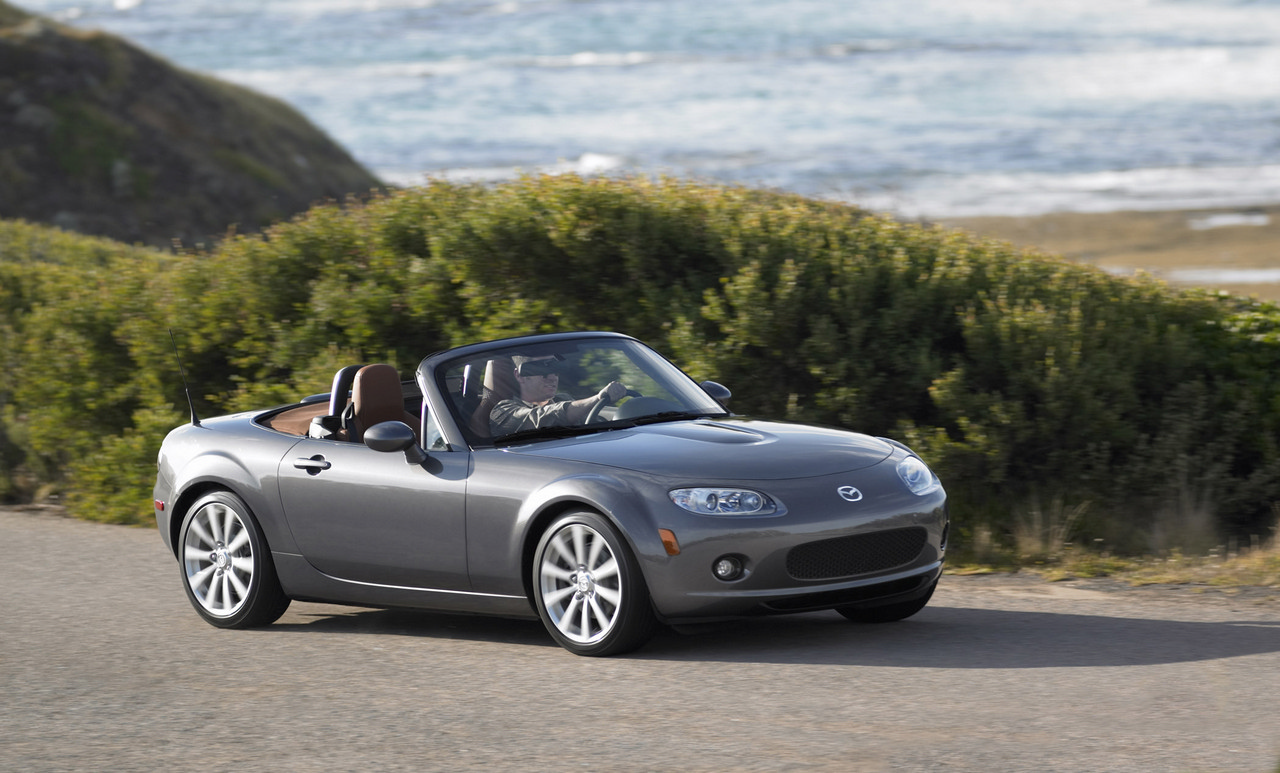 So where we once had to endure the same, annoying jokes about the MX-5’s small stature, we now have to listen to that one friend who constantly boasts about how they, “would totally own an MX-5” and “would totally LS-swap it” because “they’re crazy like that.” Yeah, right. Let us know when you get around to that, never.

Maybe you can be the one friend who finally puts their money where their mouth is and buys an MX-5. Just do us all a favour and buy one for the pure enjoyment of it. We don’t need to hear about your plans for becoming the next Carroll Shelby.

The Hyundai Genesis Coupe caused a bit of a stir when it debuted back in 2010. Taking aim directly at entrenched competitors like the Ford Mustang and Nissan Z, the Genesis Coupe was praised for its sheer bang-for-the-buck in terms of power, handling, and driver experience. 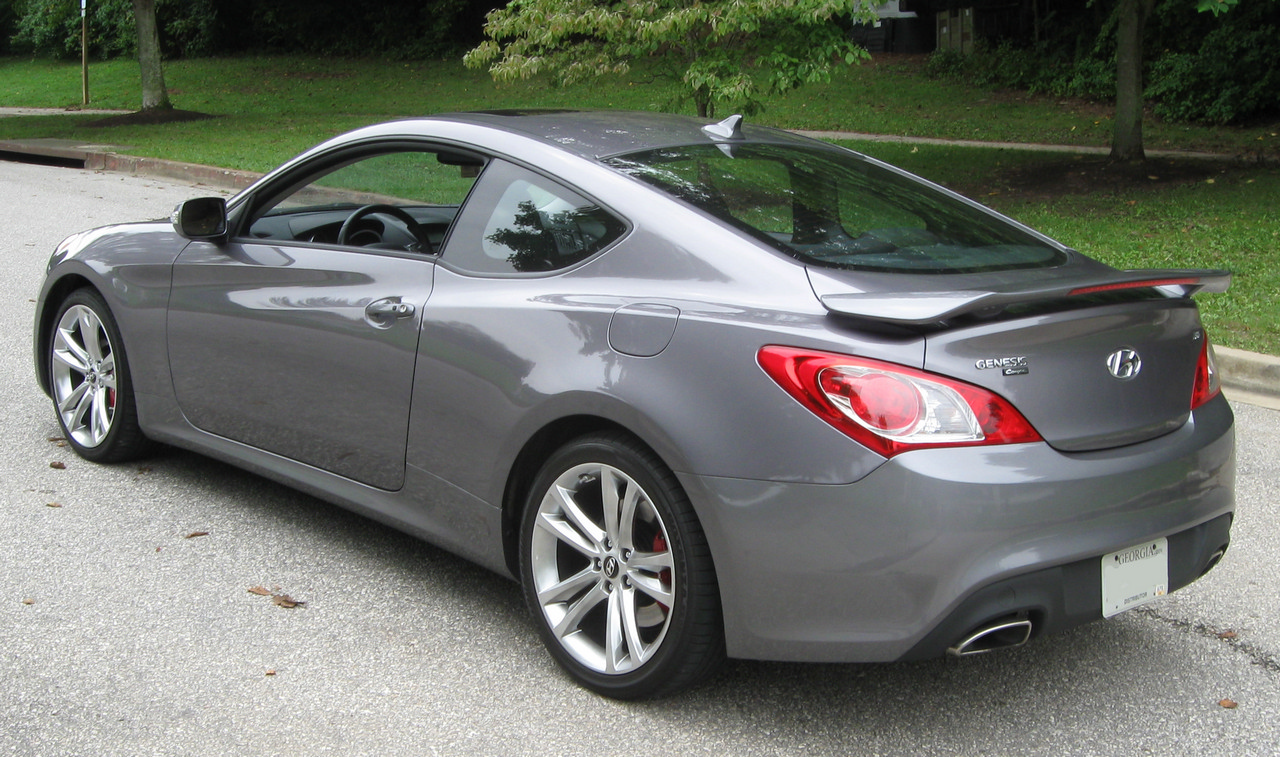 You should have no trouble finding the 2.0-litre 210-horsepower base model for under $10,000. However, with a little searching and some luck, you might be able to score a 3.8-litre GT model with a 6-speed transmission and a respectable 306-horsepower.

The BMW 1 series coupe has been consistently praised for the pure enjoyment of its driver experience since it hit North American shores way back in 2008. The Canadian Black Book now values its early base models for just a hair over $10,000. 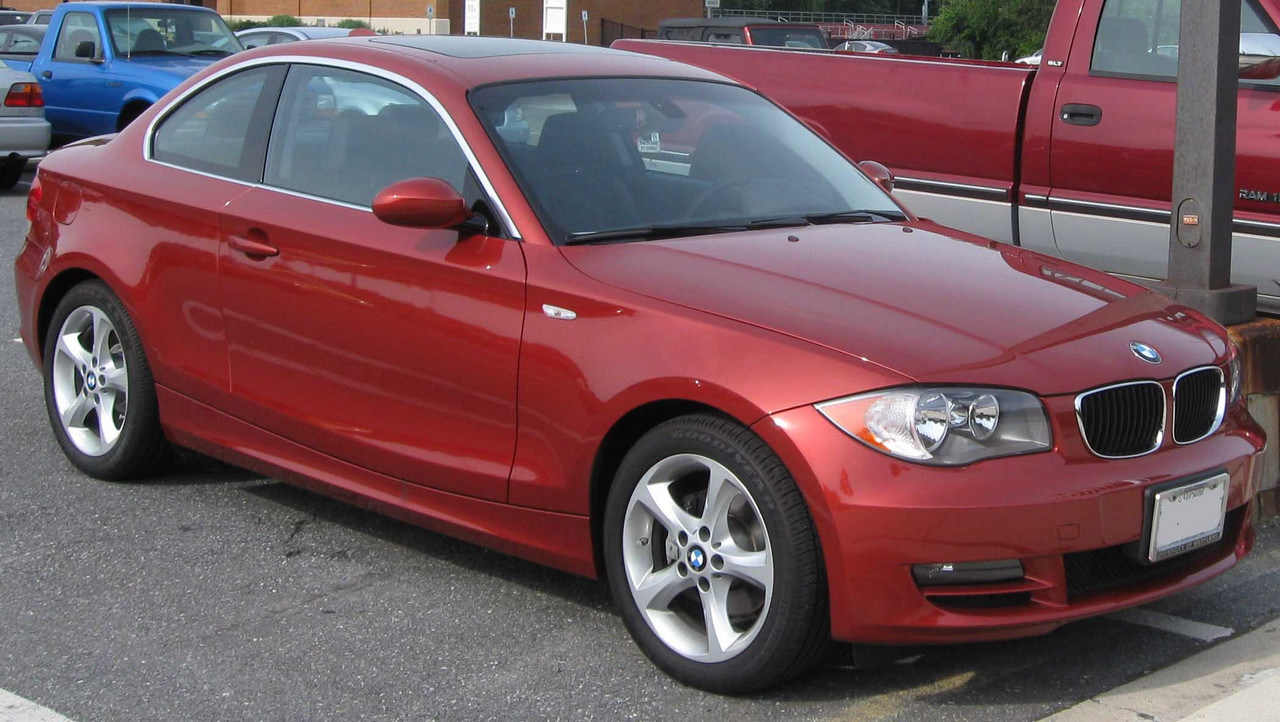 True, you’ll be down a pair of turbos and about 70-horsepower by electing for the 128i over the 135i. But you’ll still be left with a rear-wheel drive, inline-six-powered, 6-speed BMW. And it’s hard to imagine how all would not be right in the world when driving a machine with that description through some twisty back roads on a summer’s day.

Uh, yeah. So what? First of all, when did it become unflattering to be seen as blue collar? Have you ever listened to a Bruce Springstien song? It’s great. Have you ever seen a guy driving a brand new Lamborghini down the road and thought, “Man, what a cool guy.” No. You hate his flashy, rich guts. 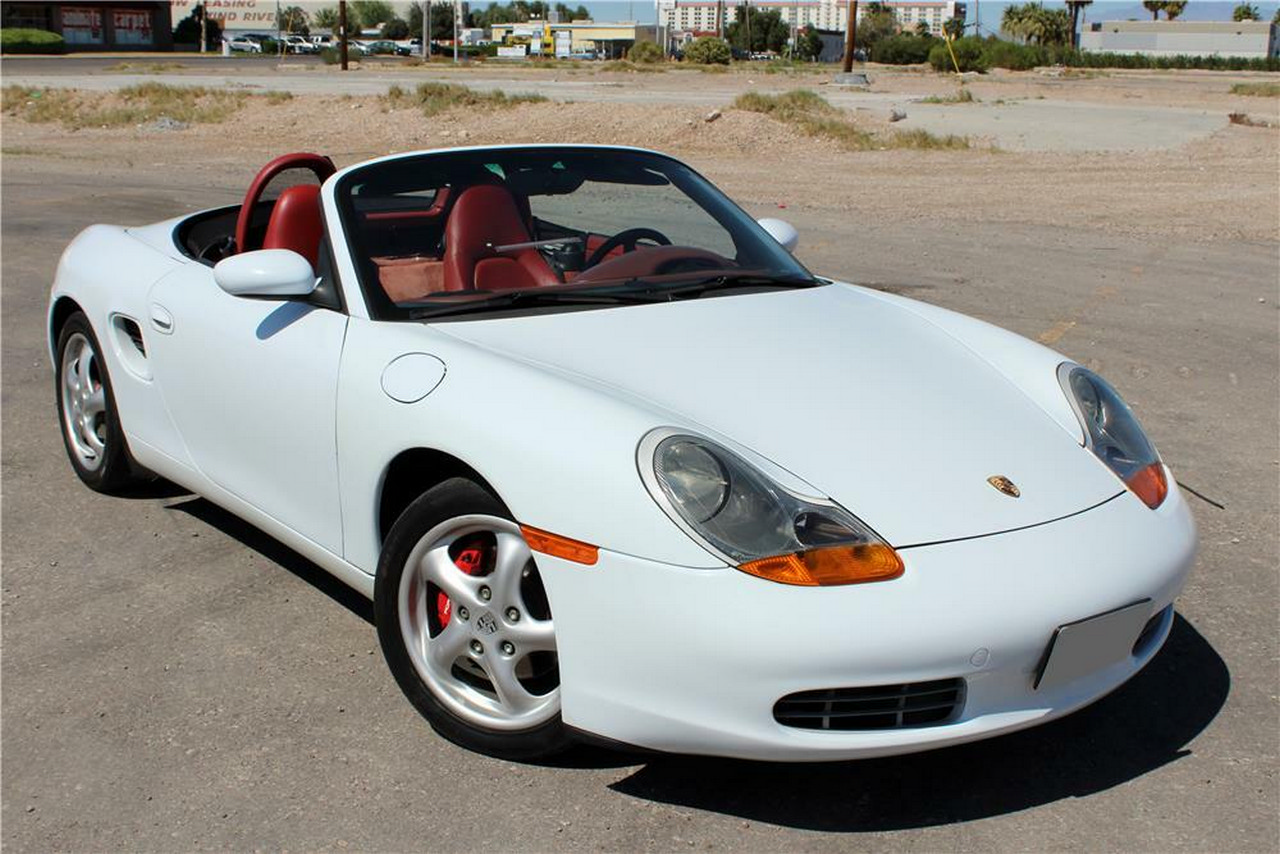 Second, the Porsche Boxster is a true driver’s car and has consistently been praised as such. In 2000, the Boxster’s flat-six engine put down up to 250-horsepower. Nothing to sneeze at in a car weighing only 1260 kg. Combined with superior weight distribution and a proper 5-speed manual transmission, this is a car you can use and enjoy every bit of, unlike its blood-thirsty, fire-spitting big brother, the 911.

Also, not the RSX. Yes, you can buy those for under $10,000 as well. But let’s face it, they were never as exciting or cool as the Integra. Where the Integra has undeniable 90s charm and style, the RSX looks like a sun visor worn by the lead-singer of a bad early 2000s pop-punk band. 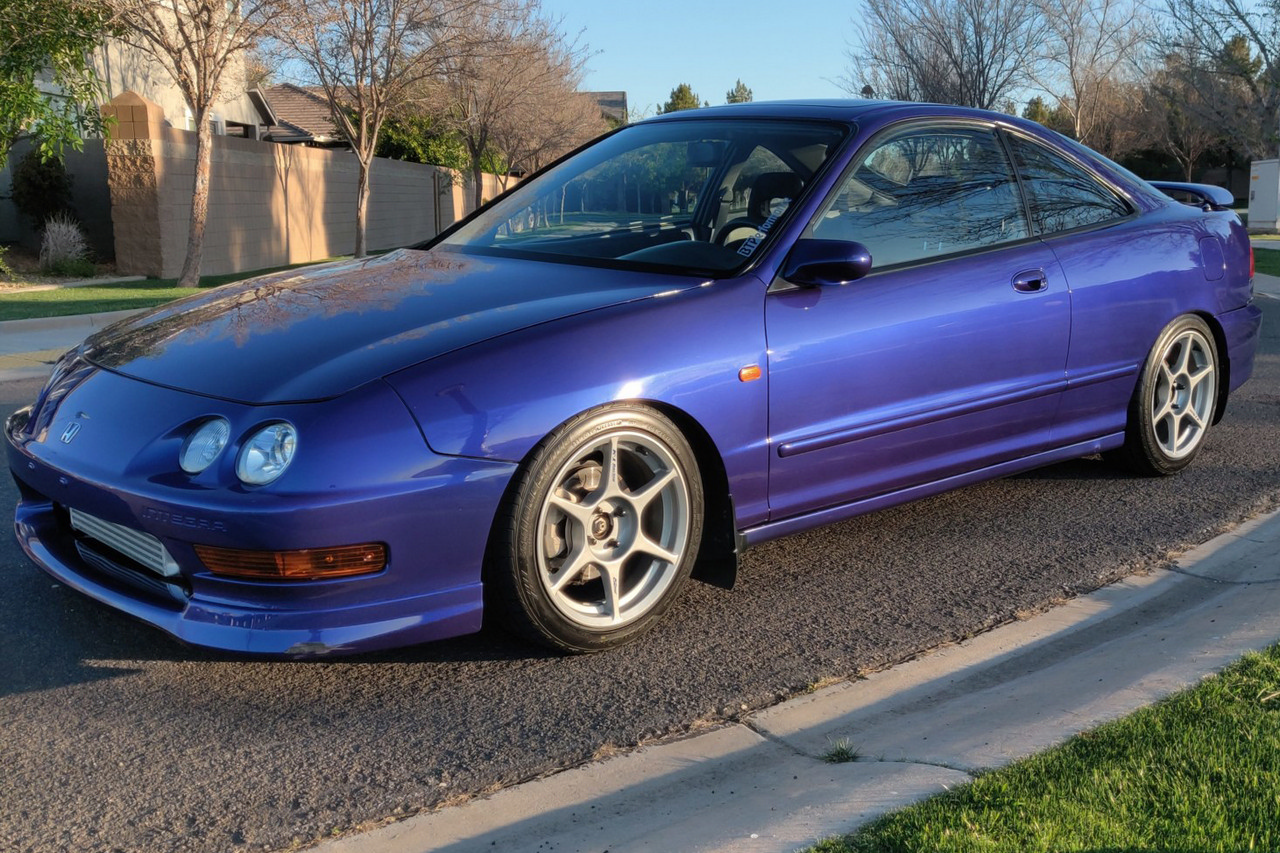 The only front-wheel drive (promise) car on the list, the GS-R still offered a 5-speed manual transmission linked up to the infamous 170-horsepower Honda Vtec 1.8-litre inline-four. That’s a recipe for a good time, and like the Boxster and MX-5, it’s a car you can use every bit of all the time.

There are still plenty of well-kept examples out in the world, so if what you’re after is a car you can have cheap fun tuning and customizing, the Integra is a great choice.

“Good luck finding one that hasn’t been drifted and/or customized to within an inch of its life.”

True, these cars are becoming increasingly rare and difficult to find. And the ones you can find have usually endured at least one owner who made very poor decisions involving unnecessary rear spoilers and handbrake turns. 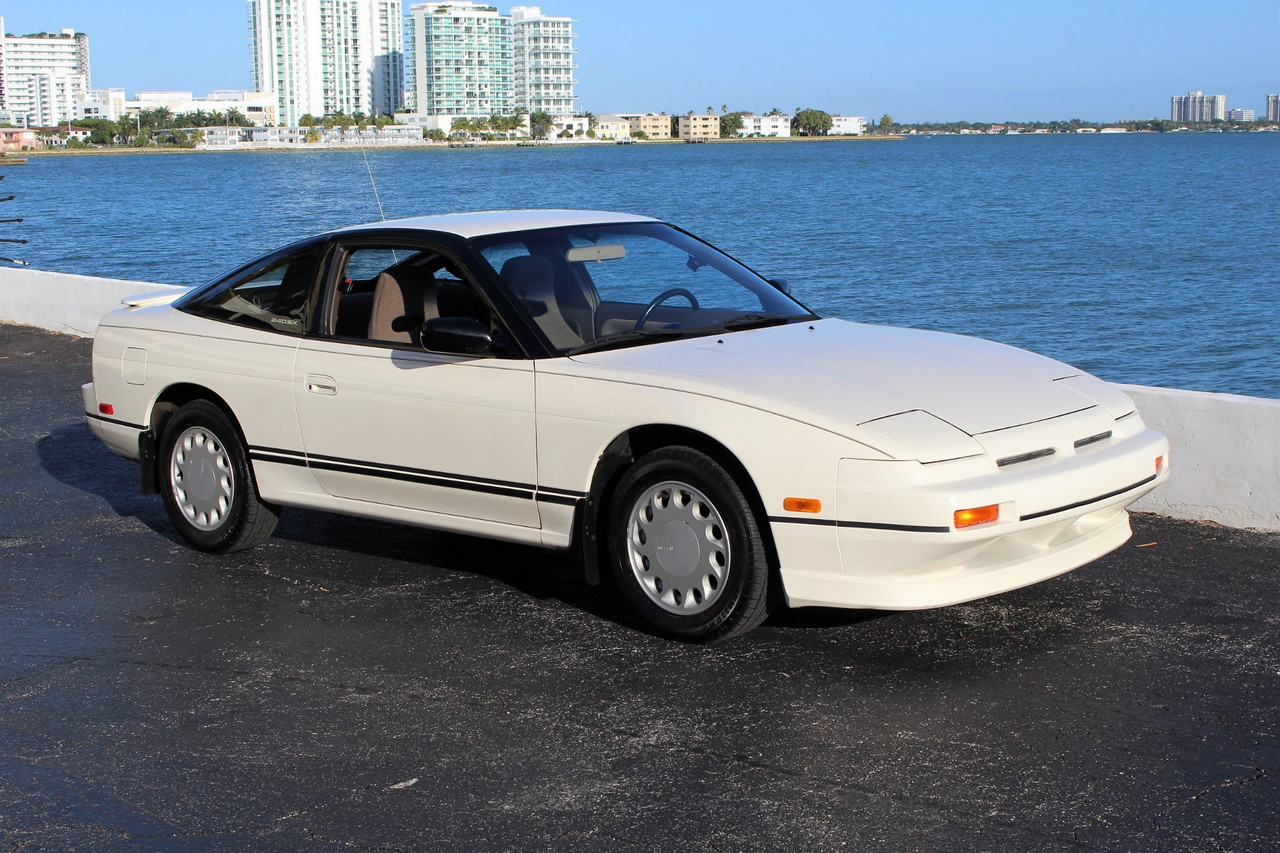 This is really the project car of the list—the one you’ll want to pocket a portion of your budget to at least attempt to get your 240sx back to something resembling stock. Which is fine because examples of this car still sell for well under the $10,000 milestone.

Why go through all the trouble? An infamously tail-happy, but controllable sports coupe, thanks to its MacPherson struts and a rear multi-link suspension, and an engine bay which can accommodate just about any powerplant you can think of to drop in. 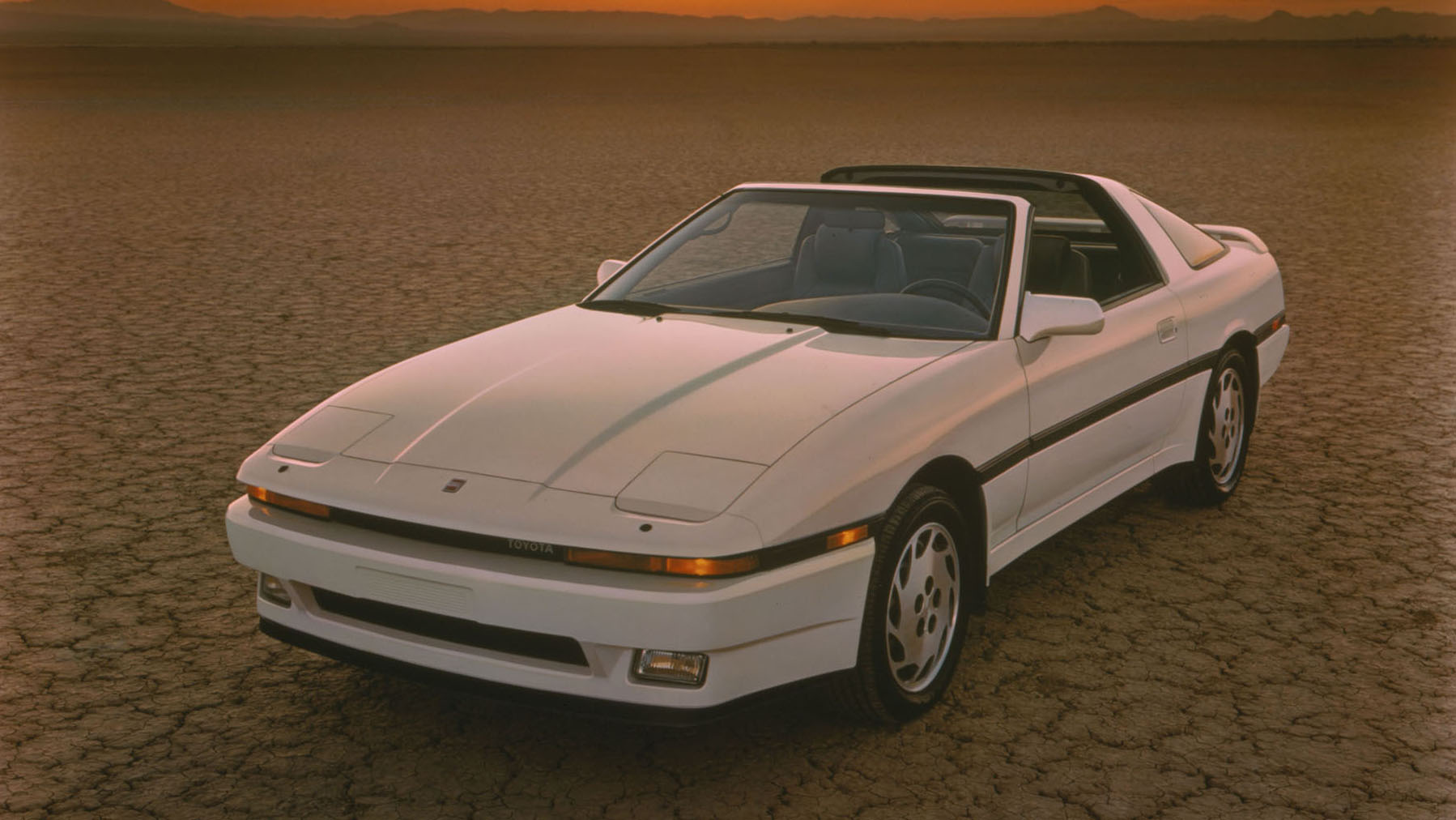 This is not the Supra you’re thinking of.

A U.S. market MARK IV Supra (certainly a twin-turbo, 6-speed car) will now set you back up to six figures. And while JDM MARK IV Supras are much more affordable (particularly the non-turbo, 5-speed cars), you would still most likely have to plan on at least doubling your $10,000 budget.

The earlier generation, Mark III Supra, however, should be very attainable for within your $10,000 budget.

Sure, it’s not the car everyone knows. But these were still available with a 2.5-L twin turbo engine (albeit the lesser known 1JZ-GTE engine, the predecessor of the infamous 2JZ-GTE) and a 5-speed manual transmission.

As a bonus, you won’t get as many annoying kids asking you, “Is that a Supra?” in Tim Hortons parking lots. And you’ll still get to constantly talk about your plans to do a big, single turbo conversion.

Honorable mentions (but probably out of your budget for a good one):