‘Top Gear’ top picks: 20 years after its relaunch, we look at some memorable episodes

The BBC car show didn’t start to gain worldwide recognition until after its 2002 relaunch, when new hosts Jeremy Clarkson, Richard Hammond and Jason Dawe were joined by an anonymous race car driver known only as the Stig.

Join the Conversation (0)
Get the right people in front of a camera and the results can be magic. This really comes into focus when you look at what was arguably the most popular motoring television show of all time: “Top Gear.”

Having been around since the 1970s, the BBC car show didn’t start to gain worldwide recognition until after its re-launch in 2002, when new hosts Jeremy Clarkson, Richard Hammond and Jason Dawe were joined by an anonymous race car driver known only as The Stig. When James May replaced Dawe after the first season, the show’s dynamic fell into place for viewers.

It seemed unlikely that these three out-of-shape, middle-aged British men would be able to connect with audiences but the chemistry between them was real and their passion for cars was infectious.

They put vehicles through gauntlets of pointless challenges and gave us beloved segments like “A star in reasonably priced car” and “The cool wall” – literally a wall where pictures of vehicles they decided are cool were placed. It was fun, and never serious. It was a car show for everyone.

Then there were the specials. These were epic feature films that saw the hosts visit a remote part of the planet where they would procure beaten-up vehicles and compete in a series of challenges. The ensuing adventures were epic, sometimes spanning thousands of kilometres through the harshest environments and putting both human and machine to the ultimate test.

After 22 hugely successful seasons, the BBC did not renew Clarkson’s contract. He, along with Hammond, May and producer Andy Wilman, moved on to develop a new series called “The Grand Tour” with Amazon TV.

Twenty years since its successful reboot, I still watch old episodes of “Top Gear,” and while most are great, these were some of my favourite episodes because they are easily the most memorable.

This special episode of the series is hard to forget. It was the first time in history that humans drove a car, in this case a highly modified Toyota Hilux pickup, to the north magnetic pole. Setting off from Resolute, Nunavut, the team battled some of the most extreme weather and geographic conditions on the planet. Even the hosts typical antics were tempered by the seriousness and danger of this particular challenge.

Clarkson, Hammond and May were abandoned in the middle of a South America with nothing but their wits and some secondhand 4x4s. Their challenge was to trek through the unforgiving Bolivian rainforest and across deserts so uninhabitable that not even microscopic life survives there. Their destination was the Pacific coast of Chile, more than 1600 kilometres away. Before setting off on their challenge, however, the boys would first need to figure out how to get their rusty rigs off the barge they road up the river on. 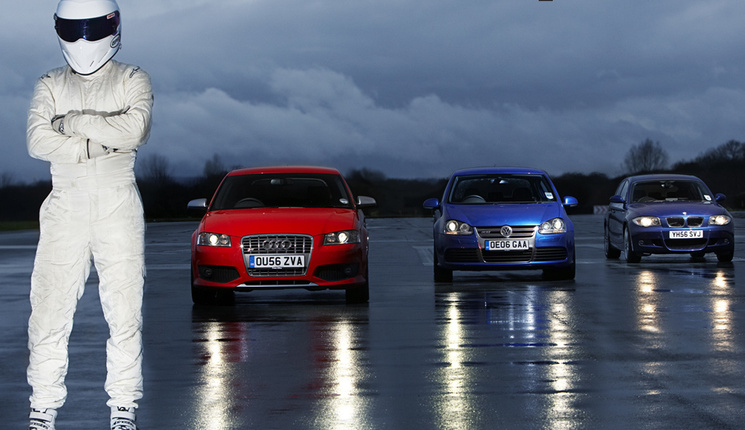 The eight episode of season five saw Hammond train with the Norwegian bobsleigh team in Lillehammer, Norway, to race against champion driver Henning Solberg and May in a Lancer EVO World rally car. It’s a battle for the ages as the bobsleigh run and the roadway being used are the same length – with both teams hoping to complete it in record time.

The episode also features Clarkson investigating whether the Ferrari 612 Scaglietti is faster than a plane flying from London to Switzerland, while The Stig blasts around the “Top Gear” test track in Fernando Alonso’s Formula 1 car.

The search for the greatest driving road in the world

In the opening episode of season 10, Clarkson is testing the Volkswagen Golf W12 while Helen Mirren trades in a big screen role to be the star driver of a reasonably priced and compact Chevrolet Lacetti.

The episode’s main segment could have been a special all on its own, with the hosts on a quest to find the best ribbon of tarmac in the world for driving. The trio eventually find themselves in Italy – “God’s racetrack,” Clarkson calls it – and driving on the switchback filled road to the Stelvio Pass in the Eastern Alps. The drive is nothing short of inspiring. (In a later episode they would end up finding an even better road, but we’ll save that for another list.)

The Porsche Panamera versus a letter

Is Porsche’s super sedan faster than the United Kingdom’s Royal Mail? Hammond and May find out by mailing a letter to the northern Orkney Islands from a post office in southwestern England. The honour of the motorcar is at stake as they race north against the postal service in this season 13 episode.

Kunal D’souza is a content strategist with Wheels.ca and a member of Automobile Journalists Association of Canada