These unique vehicles promote products and also bring smiles to faces wherever they park.

Join the Conversation (0)
From the Oscar Mayer Wienermobile to the No Frills Hauler Cart, corporate mascot cars have earned miles of smiles over the decades – and turned heads. “They can be a very powerful visual tool,” said Toronto-based sports and marketing consultant Tim McLaughlin. “They’re like rolling billboards.”

For their brands, mascot cars offer an economical way to stage an event on wheels and get their products in front of as many eyes as possible. “If you’re working with a mascot car, your transportation is built in,” said McLaughlin. “You just set out, park the thing and you’re good to go. It’s, ‘We will bring the party with us, wherever we are.’”

For the general public, he said, there can be a deeper connection. “When done right, mascot cars have a unique way of creating an emotive response. For a lot of people, the Oscar Mayer Wienermobile, for instance, takes them back to their childhood.”

Here’s a look at four mascot cars that conjure up good feelings and brand awareness.

One of the most distinctive vehicles ever built, mascot or otherwise, the Wienermobile has been “delivering unlimited joy to thousands of people” since 1936, said Ed Roland, manager of the Oscar Mayer Wienermobile program. Shaped like a hot dog on a bun, its basic design has been refined over the years, but has always remained eye-catching.

“The original Wienermobile was a 13-foot metal hot dog on wheels that had the driver stick his head out of the top of the (weiner),” said Roland. “Today’s Wienermobile is 27-feet long and made of fiberglass. It includes all of the modern conveniences.”

Those consist of a state-of-the-art audio-video system that can play 21 different versions of the company’s famous wiener jingle, a public address system, back-up camera, built-in GPS, a removable “bunroof” and separate climate control systems for the front and rear of the vehicle.

Driven by a “Hotdogger,” who is always recent college graduates, Roland said its fleet of six Wienermobiles travel to new cities each week, where they run events and add content to the company’s social media channels. In addition to the Wienermobile, the company also operates a Mini Wienermobile, Wiener Rover, Wiener Drone and Wiener Cycle.

Greg Taylor, the co-founder and CEO of Steam Whistle Brewing, calls the Retro Electro, its modified 1958 Chevy Apache half-ton pickup with a short box, a “one car parade.” The vehicle has a vintage feel and is painted to match the Pantone 2423 C green shade used for its Pilsner bottles. 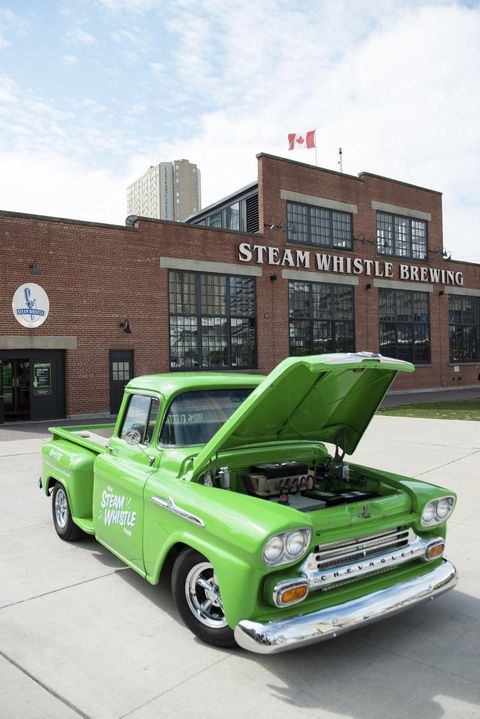 While it might appear old, the vehicle has a few modern touches that reflect the company’s environmental commitment, Taylor said. The truck has been retrofitted with an emissions-free, high-efficiency motor. “One of the problems with these older vehicles, from a maintenance perspective, is that they are a bit of a nightmare, and they pollute quite a bit,” said Taylor. “We were heading in the direction of taking care of the environment, so we thought, ‘What if we could resolve the issues with these vintage vehicles by replacing the drive system with something that was green.’ That’s when we came up with the idea of converting it into an electric vehicle.”

At nearly 6,000 kilograms, or the equivalent weight of three million peanuts, the Planters’ Nutmobile is one of the largest, oldest and – pardon the pun – nuttiest mascot vehicles on the road. “The first peanut car was built and was used by a peanut salesman starting in 1935,” said Jaynee Dykes, senior brand manager for Planters. “We have a legume on wheels. It started a year before the Oscar Mayer Wienermobile, so we might be the oldest.” 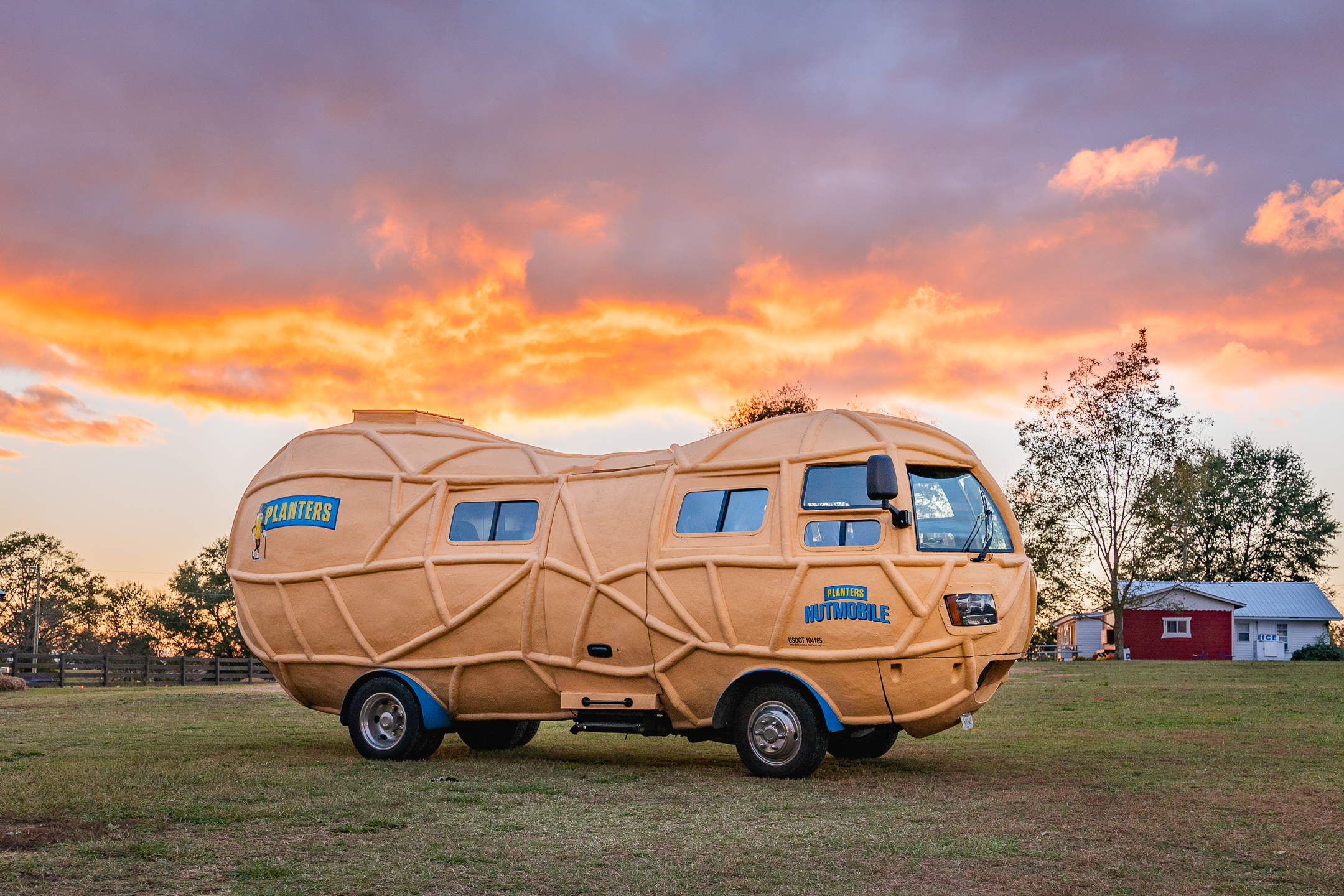 Featuring a peanut-shaped dashboard and front grill, and a “dry roasted, lightly salted fiberglass shell,” the Nutmobile appears annually at the Macy’s Thanksgiving Day Parade, has driven on NASCAR racetracks and makes regular stops at parades, festivals and retail outlets across the United States.

The vehicle’s design has remained consistent for the last decade, but it is now equipped with a biodiesel generator that provides energy for events during its tour stops.

“Anywhere the Nutmobile is, you will definitely find Mr. Peanut along with three amazing ‘Peanutters’ who are helping Mr. Peanut give out samples,” said Dykes, who adds there are plenty of “shellfies” photo opportunities. “Mr. Peanut and the Nutmobile go hand in hand. They go everywhere together because, technically, that is his home, right?”

During its Haulerverse marketing campaign, No Frills, the budget grocery chain with the distinctive yellow and black painted stores, found a catchy way to celebrate its customers, the “everyday haulers,” on their quest to get more for less.

The company’s campaign included the release of the “Hauler: Aisles of Glory” video game, a grocery-themed hip-hop album called “Haulin’ State of Mind” and a branded vehicle, the Hauler Cart. 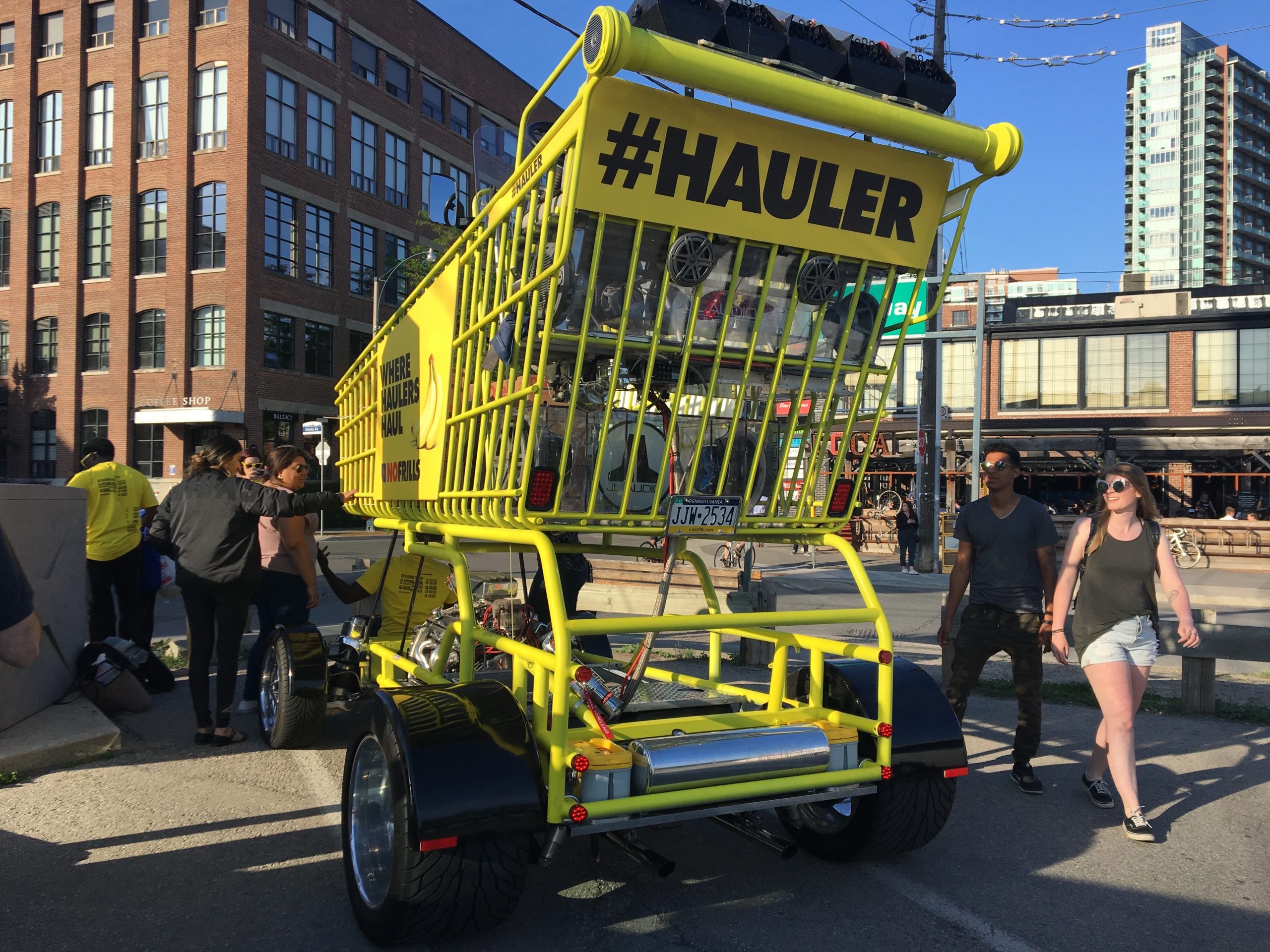 David Becker, senior brand manager for No Frills, said the three-metre-high shopping cart, powered by a small-block V8 engine, was “inspired by our experiential marketing agency that first discovered this unique spectacle in Pennsylvania. We rented this inspirational giant shopping cart, and it was such a hit with our customers that we commissioned a local company to build a one-of-a-kind No Frills-inspired Hauler Cart.”

The vehicle first appeared in 2018 and Becker said it plays music – the company’s “Hauler Anthem” – sprays bubbles and provides a unique photo opportunity. “The Hauler Cart is such a spectacle and hit with our customers,” he said. “We have not considered any design changes.”