Four doors aren’t often associated with fun, however, there are still plenty of affordable ways you can have a sporty sedan.

Join the Conversation (0)
Sports sedans are becoming a rare breed.

Between manufacturers like Ford abandoning them altogether, SUVs and crossovers devouring large portions of the market, and a new generation of YouTuber car enthusiasts focusing primarily on 2-door coupes, the very concept of the 4-door sedan seems to be endangered.

While high-end, luxury brands like BMW, Mercedes, and Porsche still manage to get mileage out of the sedan—perhaps because the sedan still retains a level of status as long as it boasts one of those badges—less sedans are seen as boring, and marketed towards older generations.

Which is really a shame. If you’re someone who needs four doors because of work or family concerns, you shouldn’t have to be relegated to shelling out mountains of cash just to get a little enjoyment out of your car. This is also terrible news for teenagers. The trick was always to talk your parent into getting the hopped up version of a four-door car by convincing them it would be “practical” somehow. Your real goal, of course, was that you could steal your parents sporty sedan on weekends and tear up the town. It’s just not something you can really do in a crossover.

Luckily, there are still plenty of sedans on sale today starting under $50,000 that offer buckets of fun with sub-6 second 0 - 60 mph (0-96 kmh) times, exciting driving experiences and aggressive, eye-catching looks.

These are the some of the best. 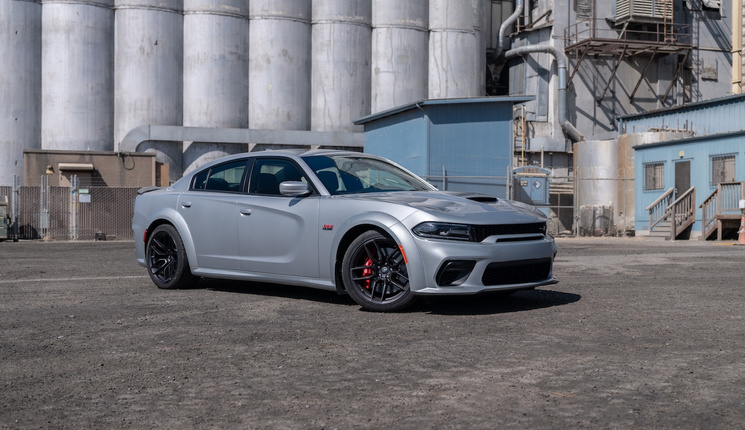 The obvious choice. The Dodge Charger really is the last hurrah of American sports sedans, so much so that it has become a staple, even an icon, of North American roads—for better or worse.

Still, it cannot be overlooked as the excellent performance bargain that it is. The familiar 6.4-litre HEMI V8 produces 485 horsepower and will punch (that’s the best way I can describe it) the car to 60 mph in just 4.6 seconds. Those numbers really only tell half the story. The real benefit to all those ponies under the Charger’s hood is just how hilarious it is to use them. SRT makes it immensely easy to squawk tires and toss passengers back into their seats. Which is really the whole point of this car.

The Charger also looks mean, aggressive, fast, and even a bit of a laugh with its ‘Scat Pack’ bumble bees festooned all over the car.

A good sense of humour. Always up for a good time. Dresses to kill. These are qualities you would look for in a person to date, and I think the same should apply to a car. 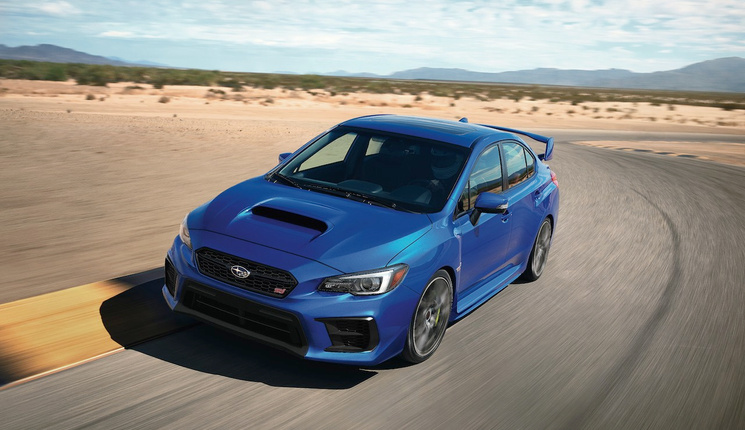 The Subaru WRX STI is a tricky proposition, as driving one around town will lead passersby to assume many things about you. Things like your favourite beverage being Rockstar Energy Drink.

Still, the WRX STI remains another performance bargain—one with some street cred, confidence-inspiring winter-driving capabilities thanks to its legendary AWD and exterior styling which, whatever you may think of it, is anything if not boring.

Its 2.5-litre boxer turbocharged engine produces 310 horsepower accelerating the car to 60 mph in 5.5 seconds. It also mercifully still comes with a 6-speed manual transmission. If you just heard church bells, you’re not the only one. 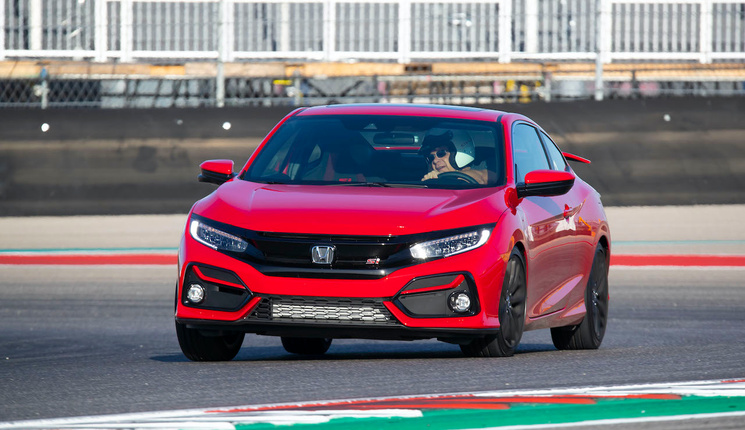 The Honda Civic Si is the slowest car on this list. It only makes 205 horsepower from its 1.5-litre turbocharged 4-cylinder engine and accelerates to 60 mph in 6.6 seconds. However, it’s also by far the cheapest option. And just because it’s a little down on power, doesn’t mean it isn’t fun.

Like the STI, the Si comes with 6-speed manual transmission (there are those church bells again) and its accessible power means you can use all of it all of the time. You can beat the snot out of a Civic Si and that’s the best thing about it.

It’s also great value for money as just a car. As the top-of-the-trot Civic line (excluding the Type R), it comes standard with just about every option under the sun.

The Type R is a hatchback, not a sedan, however if the extra fun and horsepower are what you’re after, expect to pay an additional $10,000 or so. 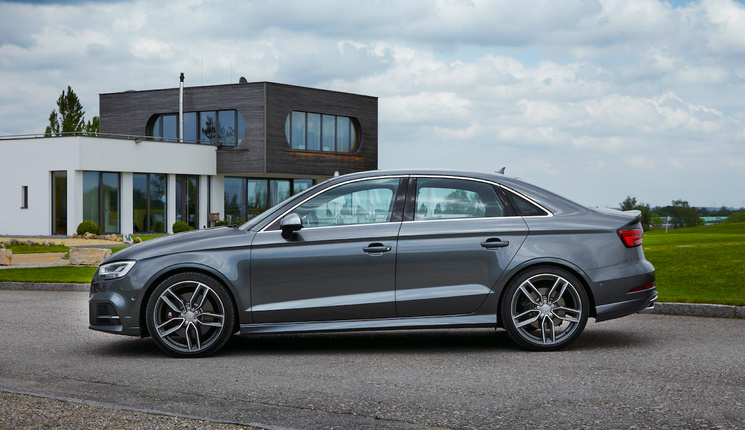 Yes, the S3 is totally a “rich kid’s” car. But that doesn’t mean it’s not a great bargain.

The S3s 2.0-litre turbocharged 4-cylinder produces a respectable 288 horsepower and accelerates the car to 60 mph in just 4.6 seconds. The same as the Scat Pack Charger which produces nearly 200 more horsepower. That’s impressive.

It also has Audi’s infamous Quattro AWD system, ensuring you won’t get stuck in the snow (which, admittedly, I totally have in an SRT Charger).

While the exterior styling of the S3 is nowhere near as exciting as the Charger—it’s far more restrained in the way German cars are (at least nobody will invite you over to watch a UFC fight), it’s interior trim is where the S3 absolutely shines.

It also has a flat-bottom steering wheel. Which is very, very cool. 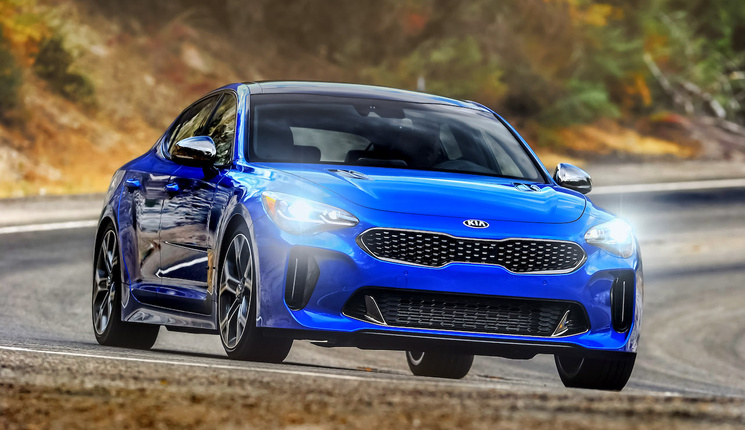 The Stinger GT is the car we’re all sick of hearing our one friend say that they would “totally own” because it’s “such a sleeper.”

That person is annoying and we should all stop being friends with them.

Particularly because the Stinger is anything but a sleeper. It has aggressive body lines, hood vents, a big, angry, open mouth and four exhaust tail pipes. It looks like it was modeled after an X-Wing fighter. It has all the subtlety of a brick flying through your window. It’s not a “sleeper.”

Still, it is a great performance bargain in the sedan market.

It’s 3.3L GDI twin-turbo V6 produces a healthy 365 horsepower and most impressively accelerates the car to 60 mph in just 4.7 seconds.

It’s a great option if you’re one to prioritize fun over a badge.