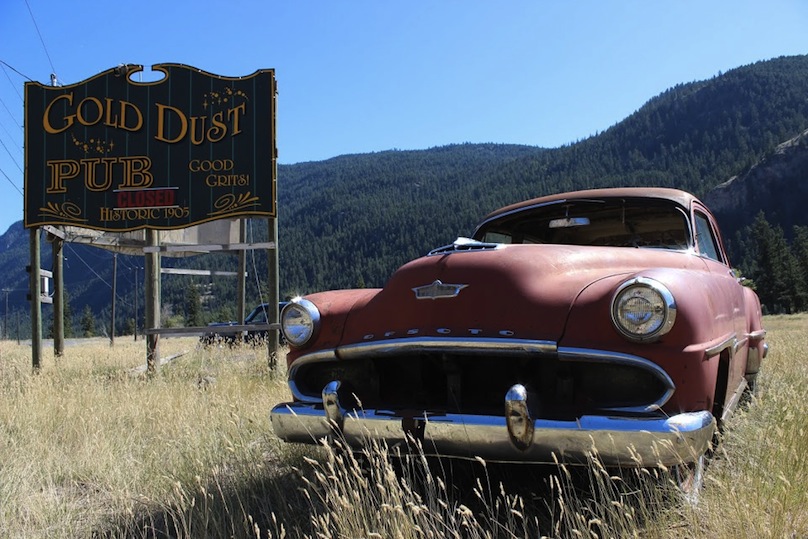 A pickup may not be the first choice for a 400-kilometre journey through canyons and over hills, but hear me out. Being of the EcoDiesel variety, this particular Ram is great on fuel. We also had the air ride suspension fitted; the Ram is the only full-size pickup available in Canada that comes equipped with a multi-link rear suspension set-up as opposed to the traditional leaf spring set-up

The corridor between Vancouver and Penticton, British Columbia, is perhaps one of the better kept road trip secrets out there, especially if you select the slightly slower route, along Highway 3 through the peach pickin’ town of Keremeos.

The other, slightly faster, option is via Highway 5, colloquially called the Coquihalla Pass, as it takes you past the 1,244 metre Coquihalla Summit. There are some nice vistas there, that’s for sure, but if it’s fine scenery that you’re after, then the former route is the better.

So my wife and I loaded up our 2015 Ram 1500 EcoDiesel pickup with all the goodies required for the five nights we’d be camping once we arrived in Penticton, at the Barefoot Beach Resort just outside of town.

But more on that in a minute. First, the truck.

A pickup may not be the first choice for a 400-kilometre journey through canyons and over hills, but hear me out.

Being of the EcoDiesel variety, this particular Ram is great on fuel. We also had the air ride suspension fitted; the Ram is the only full-size pickup available in Canada that comes equipped with a multi-link rear suspension set-up as opposed to the traditional leaf spring set-up. So, even without the air ride option, the Ram rides smoother than does, say, a Ford F-150. So we had that going for us.

Secondly, the Ram boasts one of the nicer interiors in the segment; it’s mighty spacious, and since we had the crew cab, we had a full-sized back seat (that’s got more room than do some midsize sedans and crossovers) in which to store the stuff we couldn’t fit in our tonneau-covered box. Since we had the larger cab, we couldn’t get the larger 8-foot box, and had to make do with the 6’4” option. That may seem like plenty, but when you’re planning on visiting the Okanagan’s famous wine region and loading up on the numerous tasty varieties of fruit of the vine available there, well, space fills fast.

Enough of that for now.

Being as gorgeous as it is in B.C. in August, it didn’t take us long to reach our first waypoint, about 90 minutes out of town.

What Keremeos is to peaches, and what Osoyoos-Penticton is to wines, Chilliwack is to corn. Nothing fancy; just good ol’, one-per-plant, ears of corn. Oh, but it needn’t be so fancy, because this corn is good. Like, there’s-no-way-this-is-natural good. The best way to cook it? Shuck it halfway down, remove the stringy bits (the “silk”), pull the husk back up and barbeque for 5-7 minutes. No salt required, no butter. That’s how good it is.

The experience of picking it up, meanwhile, is almost as fun as eating it; throughout Chilliwack (and, as we’d find out later, other B.C. towns, too) you’ll spot miniature barns that do just as their signs say: allow you to drive right up to the window, grab some corn for $.75 per ear, and be on your merry way. Too good.

After the ‘wack, our next big stop could have been the small town of Hope, B.C. (if we’d had a plug-in EV or hybrid, we could charge it here), but we decided to forego that and make a quick stop at the Hope Slide, instead.

RELATED: Road trip of a lifetime to Montreal, Quebec City and Ottawa

It’s hard to tell from the pictures how enormous the slide caused by a minor earthquake on January 9, 1965 actually was. All you have to know is that 46 million cubic metres of earth tumbled down a 2,000 metre mountain ridge to the highway below. It was so thick that it completely filled—and buried—Outram Lake at the base. Pretty impressive stuff.

The Hope Slide is the first stop on what’s officially called Highway 3, a road better known as the Crowsnest Higway. Not to be confused with the Crowsnest Pass in southern Alberta, the highway stretches over 830 kilometres through to the B.C./Alberta border, but we’d only be on it for about 230 km to our resting spot in Osoyoos, B.C.

Still, there’s plenty of time for some spectacular sights. There’s Allison Pass, which, at 1,342 m is the highest point we’ll be seeing on our drive to Osoyoos. However, it’s not the place where we got the best view.

At 1,282 metres, the pass through Sunday Summit provides more vistas than you can count of the valley below, ripe for 360-degree panoramic shots, if you can stave off the dizziness. It’s incredible here, with snow-capped peaks rising to the heavens, with a deep golden-green valley below that’s straight out of something you’d see in an establishing shot for, I dunno, The Sound of Music, for example.

Particularly spectacular is the view you get, dead straight ahead of you, as you begin the descent towards Princeton, B.C. There the highway stretches down towards the horizon, seemingly disappearing even though you can see land dead ahead of you. Pictures don’t do it justice, but we did our best to provide you with some scope of the view in the photo below.

Your first sign of civilization after traversing is the tiny one stoplight town of Princeton, where, after catching a quick bite at the Subway—as we did—it seems you could have made your way to the Princeton Speedway—yes, this actually exists—to take in some “mud drags” (your guess is as good as mine) and, of course, a demolition derby.

As welcoming as Princeton tries to be, the real highlight of this stretch comes one town over.

Even at about 1 PM, the old gold-mining town of Hedley which, didn’t seem to have woken up yet. Indeed, it really is kind of stuck in the Gold Rush era; there’s even a museum there that focuses primarily on that, but even it looks rather dilapidated. The most modern building we came across was—big surprise—a church perched way up on a hill just outside of town.

If the hills you just dropped out of would fit right in with a musical set in 18th-Century Austria, then this town right here would work perfectly as a backdrop for Gunsmoke, Tombstone, Rawhide or any other grimy Western you can think of.

There are businesses carrying gold minin’ monikers like “Unusual Gifts” and “Nickel Plate Restaurant”; if it wasn’t so dead, you’d expect Blondie to be stepping out of the Hedley Trading Post any second, chomping on a hand-rolled smoke. However, as quickly as that image comes to the fore, it kind of gets pushed back by other sights that are still pretty period-specific, however pertaining to a different period.

There’s the old gas station that seems to technically still be operational, but again, the fact that it’s closed early on Friday afternoon suggests otherwise. Then there’s the two DeSotos from the ‘40s standing sentry as you leave town that do suggest that, as musty as it feels, this was a fully-functional town even after the Gold Rush.

If I had to come up with one sight—or even a collection of sights—that it reminds of, it would be any number of nigh-ghost towns that dot the landscape along the old U.S. Route 66, which I got the chance to experience almost in its entirety last year. It really is an interesting sight, Hedley, if only because of what you don’t see. Either way, it’s worth a stop.

After Hedley, it’s another 30 km drive to Keremeos, which may as well be called the Wily Wonka’s of the fresh fruit world. You may have heard that the Okanagan Valley is known for its fruit, and K-town pretty much epitomizes that notion.

You will find everything here, from enormous squashes, to juicy peaches, to mouth-watering fruit syrups and on, and on and on. It’s all local, which is even more appealing considering the prices, which were either equal to—or less than—what we were seeing for stuff from California and Mexico back in Vancouver. The only real problem we had was that we were running out of space in our cooler!

It’s not all about the fruit on offer, either. It’s about the presentation: the old tractors on display in front of Parson’s; the cartoon mouse (no, not that cartoon mouse) on the sign at Gerry’s; it’s all just so refreshing, so un-incorporated that you wish you could shop like this, all the time. It’s a veritable farmer’s market, only this time, the storefront backs right on to the farms that populate the market. The fruit’s all good, but be sure to try the cherries. They’re to die for.

The final stretch is another short blast to the lakeside town of Penticton, which pretty much plays the roll of gatekeeper to the famous Okanagan wine region and more specifically, the Naramata Bench.

It’s home to wineries with such names as Oliver Twist (you must see the classic pickup parked out front), Blasted Church and more. And more. And more. There are over 100 wineries in the region, and there’s no chance you’re ever going to see them all on one trip.

Check this space in the coming days for the second part of our trip, with a closer look at the goings-on around Penticton and one of the most picturesque drives you’ll find in Western Canada.

Ours to discover: A road trip to learn about the ...

Seven Summer Road Trips from Toronto for the Whol...