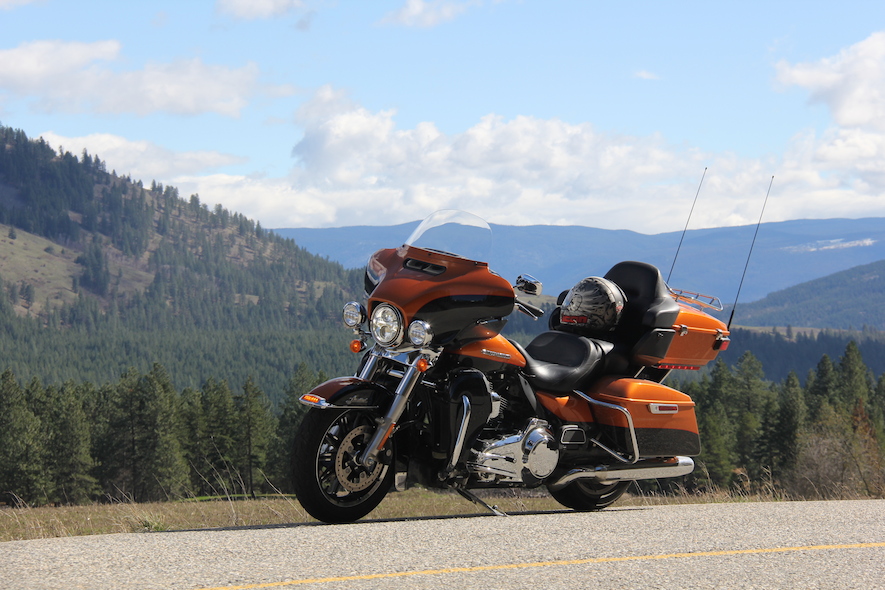 Touring the Okanagan Valley on a Harley Davidson

There is rarely a convenient time to take a holiday. The older you get, the more career, financial, familial, and various other domestic obligations shackle you into a routine that can be difficult to break free from.

For the better part of a decade now, two of my oldest and closest friends have been living on opposite ends of town in Kelowna, BC and I have been promising to visit but it had yet to happen for one reason or another. After a mutual friend of ours recently dropped dead at 35 years old from a massive and completely spontaneous myocardial infarction (heart attack), it was reinforced that life can be tragically short and tomorrow is not always promised. It was the catalyst for several changes in my life, including booking a flight the past March to visit Jon and Mark as well as their respective wives and children – whom I hadn’t seen since they were in diapers.

RELATED: 9 Simple Steps to get your Motorcycle Spring Ready

Since the weather in the Okanagan Valley is far more favourable than Ontario’s in March, I decided to take advantage of traveling to a location where the air doesn’t hurt. I decided to pack up my riding gear and fly into Kamloops by way of Vancouver to pick up a 2015 Harley-Davidson Electra Glide Limited. Stepping off the plane at the tiny airport, I couldn’t help but smile as the sunshine and a warm breeze graced my face. After a record-breaking frigid February in Ontario, I was suffering from severe withdrawal symptoms that were immediately subdued when I arrived at Kamloops Harley-Davidson and fired up the familiar 103 cubic-inch V-Twin. Coined ‘Project Rushmore,’ the full lineup of 2014 touring bikes received significant refinements, contributing to the largest scale new model launch in the company’s 110-year history. At first glance the casual riding enthusiast may not even detect that anything changed, but the new Harley-Davidson Electra Glide is a drastically different motorcycle than its predecessor, in a good way.

The culmination of these changes is a tighter, more comfortable and intuitive touring bike that has evolved into a more thought-out and sophisticated entity without losing the essence of what the Harley faithful loved about it. It pulls harder, stops faster and is an all-round easier bike to live with. Collectively, each bike received more than 100 updates, some more significant than others, such as the new high-output version of the Twin Cam 103 powerplant, which received liquid-cooling. All models benefit from a new airbox that increases intake airflow and a new cam that optimizes phase and duration, resulting in better low-end torque and improved passing performance in the top gears. Encapsulating over 2,400 new part numbers over eight models, customers, employees and dealers were sourced for input on updates that include infotainment, aerodynamics and ergonomics. This list of small changes culminates in a big improvement.

With nothing on the itinerary my first day but to arrive, pick up the Electra Glide and enjoy the area, I toured around town and pointed the big bike towards the squiggly lines on the dash-mounted GPS screen, which took me up to the top of Sun Peaks resort.

Briskly traversing the winding roads up to the summit, great care had to be taken in some of the corners where road sand had yet to be cleared away from the winter. The trip to the summit of the small ski village was worth the ride, if for no other reason than the ride itself, but the view wasn’t half bad either.

Residing at the convergence of the two branches of the Thompson River near Kamloops Lake, Kamloops, or “Tkumlups,” means “the meeting of the rivers” in the Shuswap language Secwepemctsin. European settlement changed the area from a fur trading hub and fishing village into a region that relied more on industry and agricultural. Like most of the province, outdoor activities of all kinds are enjoyed year-round. Encapsulating this experience is a 4×4 I came across that had both a windsurf board and snowboard on the roof. Both could easily be used in the same day if you timed it right.

Encompassing mountainous desert reminiscent of California’s landscape, the area also features an impressive array of old cars that would have succumbed to time and devoured by salt corrosion years ago elsewhere in the country but continue on here as timeless, albeit faded, daily drivers.

Doing my research on the region prior to arriving, I came across several endorsements of The Dreamcycle Museum just off the Trans-Canada in Sorrento between Kamloops and Salmon Arm.
Only in its third year of operation, the museum is unassuming from the road but turned out to be well worth stopping for. I would recommend making it a priority for any motorcycle enthusiast, regardless of whether your visit it merely as a stopover while visiting the incredible roads in the area or it being the destination itself.

Despite the fact that owner and manager Mark Lane’s expertise resides in tree planting after 25 years in the business, his retirement project is a professional operation that will elicit feelings of severe jealousy from any motorcycle enthusiast and inadequacy from even the most prized collector. Featuring a drool-worthy gift shop filled with a diverse collection of aspirational items, an intimate theatre where motorcycle themed films play continuously on a loop and an impressive workshop where projects are refurbished or restored, the highlight of Dreamcycle is obviously the motorcycles themselves. Comprised of rare models from well-known marques like Honda, Kawasaki and BMW, Lane has amassed a collection that features lesser known brands like the ill-fated BSA, Ariel and even Vincent. While some of the models are shockingly low mileage examples, prototypes or one-of-a-kind race bikes, the crown jewel of the museum is Lane’s recently acquired 1911 Pierce Arrow which is prominently displayed at the entrance of the collection. Lane wanted this bike so badly that he even traded his beloved Ferrari for it. Lane justifies this decision by explaining, “I can always buy another Ferrari one day if I want to, but the opportunity to find another Pierce Arrow in this condition would never happen again.”

As much as he would love to own thousands of motorcycles (wouldn’t we all), Lane acknowledged the need to pick a theme and stick with it in order to have any kind of consistency. “What I’m looking for are rare bikes with a unique history or design characteristics,” explains Lane who is not only the owner and proprietor, but also chief mechanic, occasional custodian and personal tour guide.

RELATED: Road Tripping on Vancouver Island in a Lincoln

Bikes are constantly changing so you never know what you’ll find there. Lane admits that he doesn’t post the collection on his website because he believes that the bikes should be experienced in person rather than being read about on the Internet. The Museum and the adjoining motorcycle-themed Sprockets Café have become a gathering spot for classic car owners and a hub for motorcyclists to gather and partake in the many clover leaf routes around the area which are as plentiful as they are enjoyable. 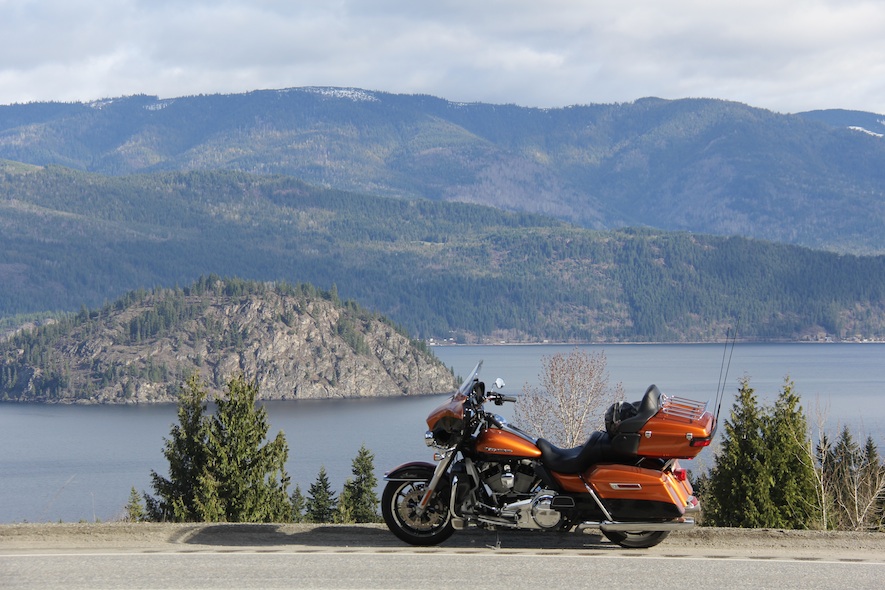 Leaving the museum for lunch in Salmon Arm before heading down towards Vernon by way of winding and scenic back roads rather than Highway 97B, I reflected on how inspiring it was to witness someone who has embraced their passion and pursued their dreams like Mark has. Life truly is too short to spend it doing things that don’t serve to promote our personal growth or fulfillment. I take solace in the fact that my recently and prematurely deceased friend Derek passed away while exploring the world while on vacation with his beautiful wife. There is never a good time or scenario to meet one’s maker, but I like to think that his last moments were happy ones.

They say that friends are the family you choose and I consider both Mark and Jon to be family. Navigating our formative years together, we shared the many victories and defeats of childhood and adolescence, continuing to be friends to this day regardless of the miles that separate us. As is the case with old friends, we immediately slipped into the familiar status quo of jokes and insults – the personification of male bonding.

Mark enjoys riding his British café racer around Kelowna year-round but Jon hadn’t been on a motorcycle since his uncle took him around the block on his Fat Boy as a kid. He was excited at the prospect of going for a ride despite riding pillion, “I borrowed a buddy’s motorcycle gear and I’ve got a pair of cowboy boots.”

While we both felt a little bit like Jim Carrey and Jeff Daniels riding a scooter in the film Dumb and Dumber, carrying the added weight and drawing more than a few stares was worth it to experience the surrounding roads on two wheels rather than from the passenger seat of his luxury SUV. Leaving their house in Glenmore, we travelled across the William R. Bennett Bridge and up Westside Road along the west side of Okanagan Lake. 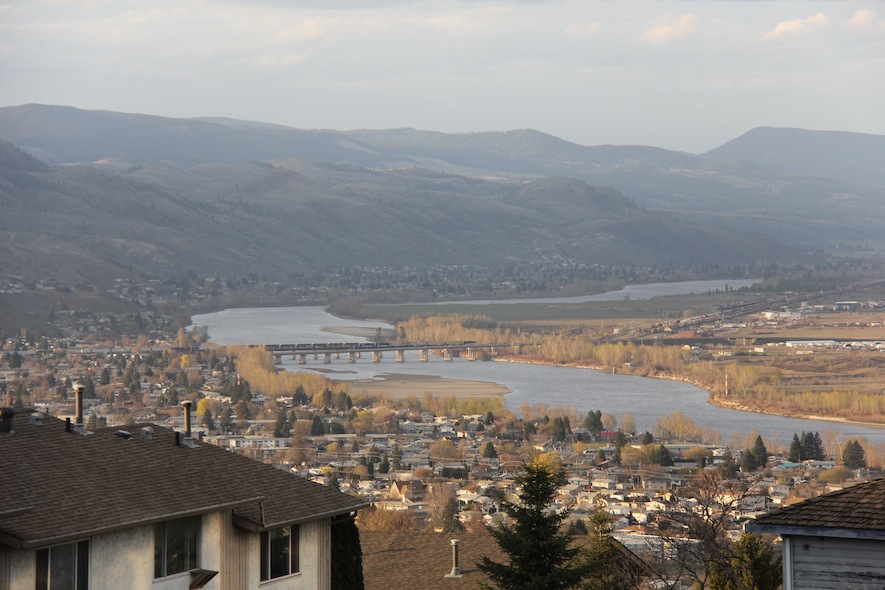 We learned quickly that the signs warning of road crossing rams should be heeded since we met eyes with a number of them during out afternoon ride, which also took us further south down Boucherie Road to where the wineries reside, for which the Okanagan is world famous. Sharing more than a couple bottles over dinner, I can certainly understand why.

Despite the warnings from my cab driver that night about my proposed route the next morning, I opted to take Highway 97C to Merritt then 5A to Kamloops where I would return the Electra Glide and fly home. Known as the Okanagan Connector or Coquihalla Connector, the 220 kilometre stretch of expressway has very few exits, little traffic and a suggested speed limit of 120km/hr. This steep elevation changes and higher speed limit allowed the new aerodynamics and engine dynamics to really shine through over its predecessor. At its highest altitude, the Pennask Summit reaches 1728m above sea level) and often experiences snow, which I learned firsthand. Colder and possibly a little wiser, I made it through the ordeal unscathed and arrived safely at my destination. The whirlwind weekend of travel was short-lived and left me exhausted for the workweek ahead, but the recollections of vast, pristine landscapes and new memories made with old friends will continue on until the next time we meet up down the road.

RELATED: 12 amazing roads around the world