The Arctic Watershed and Second Thoughts.


After my second night of novice camping, I was showered and packed by 9am. I was looking forward to crossing my first time zone and I was excited to trade in my second sleepless night for a comfortable bed at a hotel. I would get back to tent camping by the time I hit Banff in another few days but I knew I needed some sleep to be safe across the next few thousand miles. I pulled out of my Kakabeka Falls campsite, waved goodbye to Lake Superior, and was ready to say hello to whatever came next. 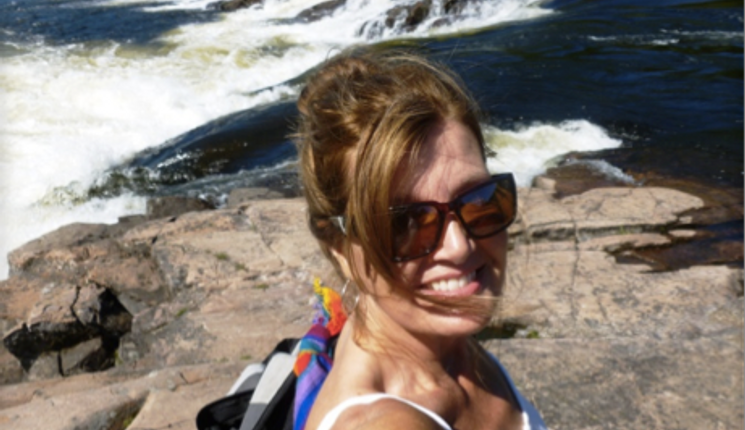 
It had rained during the night a little, but my strategic foresight of placing my tent beneath giant pine boughs paid off. All I had to do was shake off the fly and the rest of my tent was water droplet free.   The weather, however, was not water droplet free. As I drove northwest the sunny morning gave way to pouring rain and it was getting colder by the mile.  The further north I drove, the harder it rained. If you've ever driven beyond Thunder Bay you already know how treacherous that two lane highway can be. With my windshield wipers on the turbo setting , I thought about the AWD SUV I'd traded in a few months earlier. Excellent timing. Not. As I put my face up against the windshield for better vision, I began to wonder how my little Chevrolet Cruze was going to navigate over 10,000 km let alone plough its way through deep pools of water, endless potholes, and never ending logging truck spray.

Road Trip: Toronto to Winnipeg in a 2015 Ford Mustang


After many white knuckle miles I was excited at the beacon up ahead that read "LCBO/Trading Post/Hunting Supplies/Gas Station/Restaurant". Northern Ontario rest stops are efficient. I was near Upsala, known for its proximity to Thousand Lakes , which is host to numerous hunting and fishing outposts. Lucky for me the cashier was happy to pour me the first cup from a freshly brewed pot. The fact that I had no cell phone service and the gas price was 25 cents per litre more than I'd paid at the last gas station, was of no concern since I had a hot cup of coffee to warm my freezing cold hands.

It wasn't long before I entered the Central Time Zone and saw a marker identifying the area as part of the Arctic Watershed Region. According to Canadian Geographic, its total area spans over 3.6 million square kilometres and receives the drainage from 75% of Canada's land mass. Isn't that cool? Canada's major waterways all flow north.


Unless you count the hunt camps, liquor stores, gas stations and the odd roadside motel, there's not much to see until you reach Dryden. At the risk of offending any Dryden-ites, there wasn't a whole lot to see in "The Wilderness City" either, but it was a welcomed sight just the same. I was half way to Winnipeg and there was a Tim Horton's.


When you tell people you're driving across the prairies to get to the west coast, some will try to convince you to fly over them instead. I'm here to tell you to do the drive, at least once in your lifetime. It is a magnificent part of Canada to experience by car.

During the non-descript drive from Dryden to Kenora, the weather cleared and the sun came out. As my grip began to loosen around the steering wheel and the stress of bad weather driving lifted, my mind began to wander. I had been in the car for over 2000 kilometres across the span of a few days and I hadn't talked to a soul other than a gas station attendant, a police officer and a retired teacher from England.


Kenora reminded me of Muskoka in south-central Ontario, where I'd spent almost every weekend of my life from the age of 15 to 21. My best memories of my parents, both of whom are deceased, were from a place that looked very much like the scenery from the highway. Out of nowhere I felt a lump in my throat and the tears welled up in my eyes. As they streamed down my cheeks, I thought about how much my parents would have loved this Canada road trip and how very much I missed them. And so, I put my Braveheart soundtrack CD on repeat and I imagined my Dad, who was half Scottish, riding shotgun and my Mom in the backseat telling me to slow down. I pulled off at a rest stop a short while later and once again I had the place to myself. I walked around to stretch my legs and sat quietly by the water as I sifted through thoughts of countless memories. Road trips have a way of creating space in your mind so you can remember all the things you thought you'd forgotten. 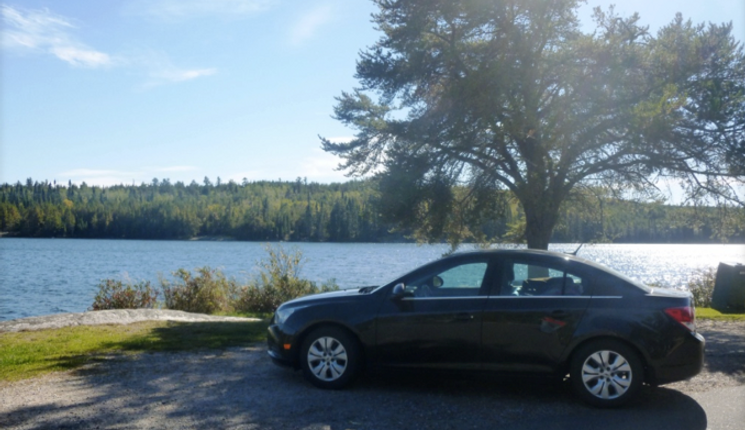 The Kenora District of north-western Ontario is the place to go if you're looking for some of the world's best walleye, and the area is host to the well known Lake of the Woods. There are over 14,000 islands and 105,000 km of shoreline according to the local tourism association. The Lake of the Woods Historical Society shares, " The rugged rock and lake terrain that remains today is known as the Canadian Shield, which ends in the Lake of the Woods. The rocks that form this shield are among the oldest on earth." The rugged beauty of Ontario was about to give way to the calming fields of the Canadian Prairies. 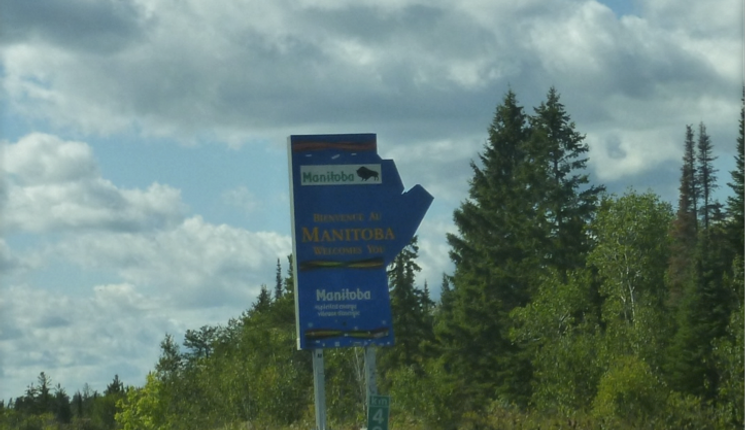 
I spent the next several hours deep in thought and I must have gone on automatic pilot because I barely remember the drive from Kenora to the Manitoba border. I asked myself all kinds of questions. What was I going to do with my life once this road trip was over? Was I crazy to take this on all alone? What if I had gone off the road in the rainstorm where there was no cell service? Who would know? Was anyone missing me? To stop the barrage of rapid fire questions spinning around in my head, I decided to store them in the far corners of my mind for the time being, and just let the adventure unfold at will. I'd made it this far without any major problems, I'd faced the fear of travelling alone, and I was beginning to settle in to my new, albeit temporary, gypsy lifestyle.

The next thing I knew I was entering Manitoba, and without a word of a lie, within a few kilometres of the border the rolling hills of Ontario came to an abrupt end. All I could see was flat land; flatter than flat roads and wheat fields as far as the eye could see. It was marvellous. The closer I got to Winnipeg, the closer I got to a sweeping rain storm. I had never seen anything like it. It literally swept across the horizon and I could see it raining in several different places in the distance. Within a few minutes, it was pouring all around me, and as quickly as the rain storm blew in, it blew right back out and the sun came out. 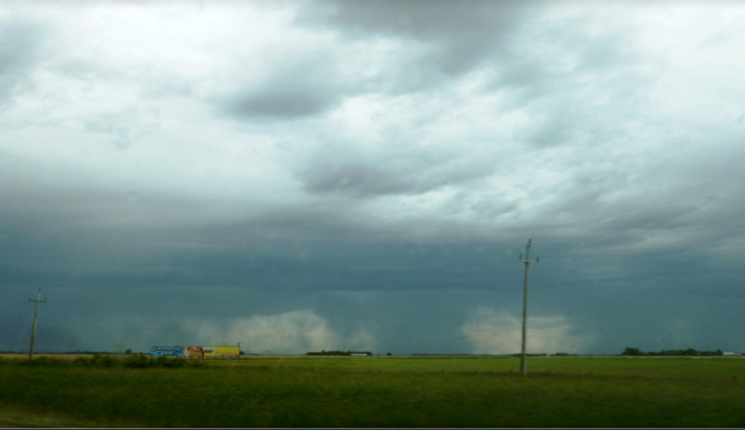 Winnipeg is one of those cities that has a certain charm to it, but you don't need to stay very long to get the gist of it. If you ever find yourself in Manitoba's big city, be sure to check out The Forks near the riverside; it's a must see. I had been to Winnipeg before via airplane in February, when it was -40C, so I was thankful to see it unfrozen this time.


My hotel, located on the west side of Winnipeg, was under construction when I pulled in at dinner time. It looked a little sketchy from the outside but was thankful for a room in the newly renovated wing. I threw a change of clothes and some necessities in a small back pack once I pulled up to my door, and then I flung myself on the queen size bed. Paradise. 2400 kilometres in a little over 48 hours was a pretty good haul for a first time road tripper. An hour later, I awoke to my rumbling stomach so I ordered a sandwich to go from the bar full of lottery terminals across the street. It was the best meal I'd had in days and I swore the Winnipeg version of a clubhouse sandwich was, and still is, the 'Best Sandwich Ever'.

I was wide awake, showered and ready to hit the road by 7am the next morning thanks to the power nap and good night's sleep the day before. I gassed up, coffee'd up, and pointed my Chevy back to Highway 1 West for day number 4. Although it was only 6 degrees, the sun was out and I was going to cross another provincial border in a few hours. I searched for a local radio station and country, country or country were my choices. I settled on Brad Paisley's, "Mud on the Tires", and I sang along at the top of my lungs as I pulled out of town. I found myself wishing I had a cowboy hat. I was excited knowing I had 650 kilometres to enjoy before I arrived in Moose Jaw, Saskatchewan; it was going to be my last 600 plus kilometre driving day for awhile, and I was going to enjoy every minute of it.