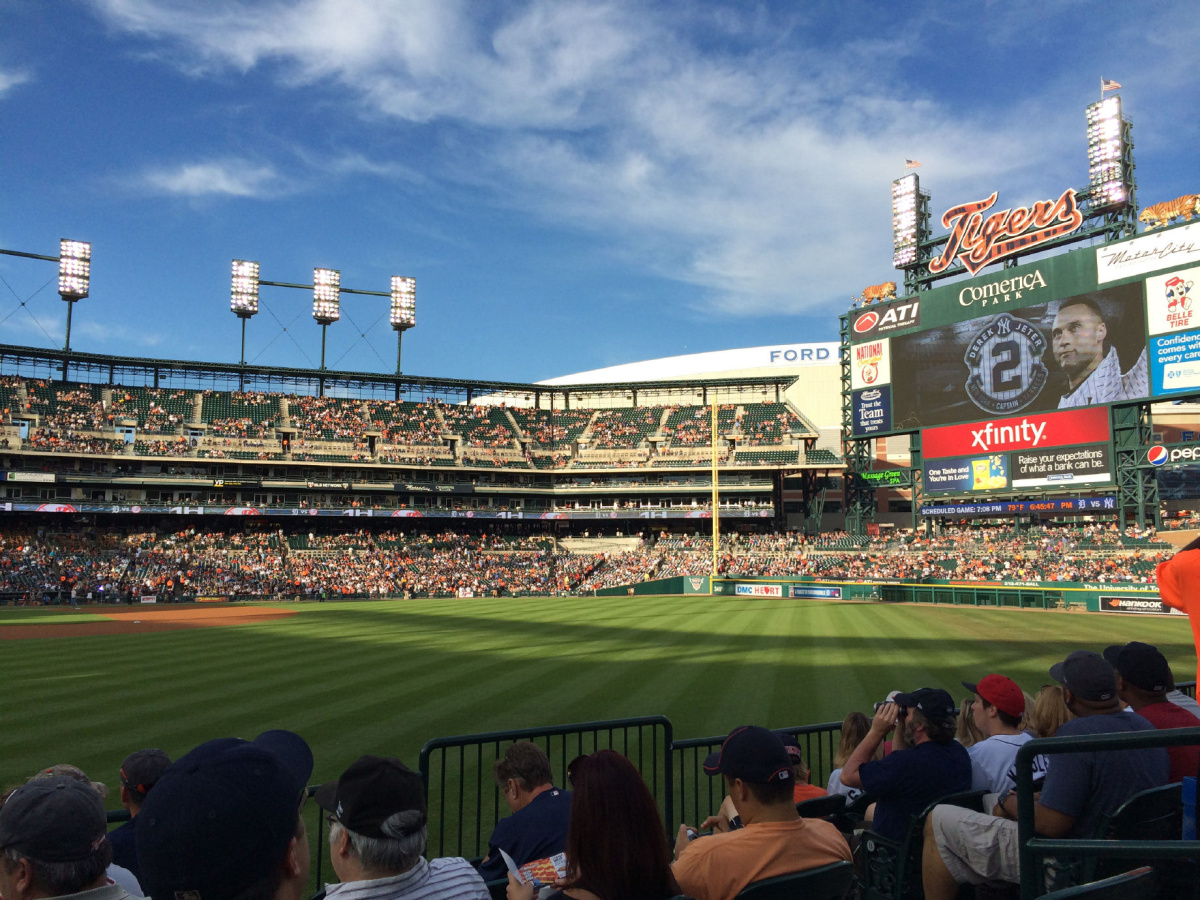 Model the perfect ride for a pilgrimage to see Derek Jeter and embark on fun adventure.

Dashing to Detroit to wave a Yankee legend goodbye

DETROIT — We are dashing to Detroit in a Dodge Dart, peeling off the late days of August on a pilgrimage to see New York Yankees shortstop Derek Jeter play the Detroit Tigers one last time before retirement.

The Dart proves to be a perfect teammate for the road trip, interesting enough to drive, congenial to ride in, and stuffed with a concert hall sound system that is lifting the tedium of driving on the soulless 401.

The idea to see Jeter on his farewell tour hatched in the spring. My road trip companion is my friend Sarah, a true baseball seam head. Last year, we paid dearly to see the Yankees play in New York. In Detroit, $48 tickets give us a splendid view of the field, enhanced by $8 craft beer. At $24,810, the Dodge Dart was plenty likeable too.

Our model, the SXT with the Rallye Appearance Group package, includes touring suspension, stabilizer bar, and trim bits geared for a sportier look.

In an instant we are both happy with the hospitable cabin. The seats fit right away and never needed fiddling after the initial setup. Visibility is good forward and a crisp backup camera takes care of the rear view. The instrument panel and controls are laid out with perfect logic. An 8.4-inch touchscreen display is dead easy to work.

Destination Detroit programs into navigation in seconds, and when the system is switched over to the radio, a small map remains on the screen for reference.

All climate functions are controlled by big dials, no need to poke the touchscreen. The centre console’s controls are rimmed in black trim, as are the gauges in front of the driver. In all, it’s a handsome and restrained interior.

The Dart, with its 2.4-litre, four-cylinder engine pushing out 184 horsepower, is well-suited to plug along in the giant car pool headed for the Ambassador Bridge. The smooth shifting six-speed automatic works discretely, and on the numbing 401, the straightforward cruise control is your best friend.

We averaged 7.1 L/100 km on the highway. I can tell the steering is well-weighted even though a curve can’t be found from Tillsonburg to Windsor. Brakes are fine, but with vague pedal feel, and road noise is nicely muffled.

Normally on a road trip, I can’t wait to get off the main roads and explore; on this trip, not so much. I stash the Dart in the parking garage at the Greektown Casino Hotel. The stylish hotel is plunked in the middle of interesting restaurants, historic churches, and is a 10-minute walk to Comerica Park, home of the Tigers, and Ford Field where the NFL’s Lions play.

Walking to the game, there isn’t much evidence of a Detroit in distress and navigating bankruptcy, although private security guards are on duty near hotels and restaurants. Across from Comerica Park, the Detroit Athletic Club is putting on a fine spread for members; it’s all white tents, linen and oysters on the half shell.

Other bars and outdoor patios are full and street music serenades a festive crowd inching in through the gates of the ballpark.

And what a ballpark it is, with powerful statues of Tiger greats Al Kaline, Ty Cobb and longtime radio announcer Ernie Harwell. Convivial places to eat and drink include the Picnic Porch, where fans feast family style at tables overlooking the field.

The night they salute Jeter is the 10th sellout in a row for the Tigers. He’s greeted with a roaring ovation from everybody including old ladies, babies in Tiger T-shirts and dads with sons lifting baseball gloves too big for their small hands.

It’s a Midwest crowd — warm, welcoming and without airs. Jeter played high school ball in nearby Kalamazoo, and his former coach is here to see him tip his hat to the crowd a last time.

His first games as a pro were at old Tiger Stadium and tonight he’s given two seats from the old park as a memento. Then it’s time to play ball. It’s a classic summer night.

The next day, we take the Dart out for photos, posing it underneath the tiger statues at Comerica Park’s entrance. Close to the stadium, the Dart is dwarfed by the splendid Fox Theatre, built in 1928 and restored in 1987 by the Ilitch family, owners of the Tigers and the Red Wings.

While the Tigers play to a packed house, the Detroit Jazz Festival is taking over Campus Martius Park. Music in the open air, ball games nearby, all close to our hotel.

It is a great trip, an escape to a bubble of fun and culture, still vibrant in a struggling city. On the way home, cocooning in the pleasant Dart, it’s easy to linger on the pastimes of summer — a diversion from worrisome news in Detroit and around the world.

Accommodation was provided by Detroit Metro Convention & Visitors Bureau and the Greektown Casino Hotel. The Vehicle tested by freelance writer Kathy Renwald was provided by the manufacturer. Email: wheels@thestar.ca