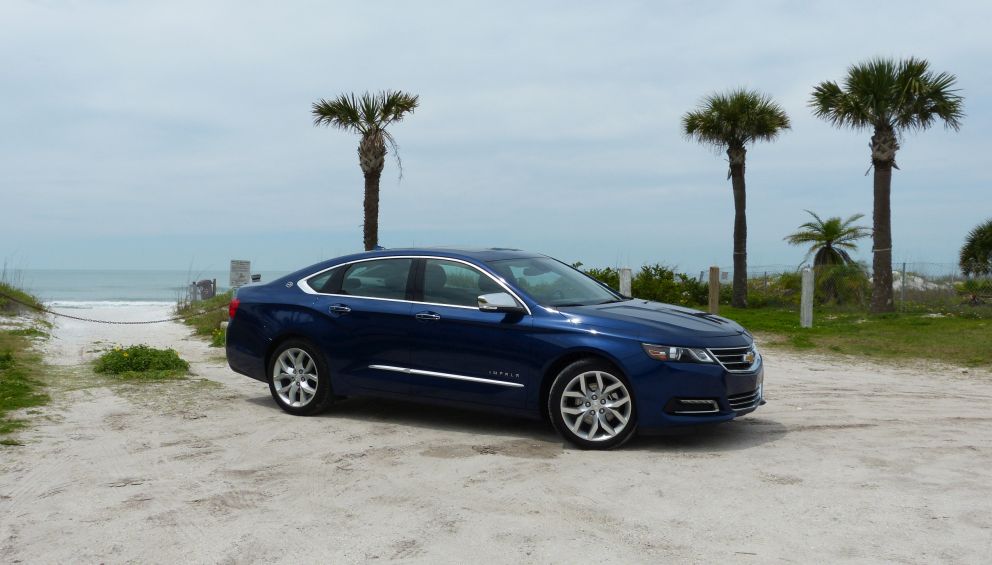 After this never-ending winter, I was more than ready for a little sun and sand during the opening IndyCar weekend in St. Petersburg on the Gulf coast of Florida.

My vehicle was the redesigned 2014 Chevrolet Impala 2LZ, the best-available trim for this more streamlined and somewhat aggressive-looking full-size sedan.

Aggressive, that is, until you climb in and realize the cabin is in no way aggressive at all. In fact, it?s downright luxurious.

Leather on the steering wheel, detailing, and seats comes standard, and those seats are very comfortable and highly adjustable, including a four-directional headrest. They are also heated, and can be ventilated as an option.

A lot of clever thought has been put into small details that make life behind the wheel easier. The dashboard layout is easy to absorb at a glance, and controls are well within reach and make sense. The steering wheel can be repositioned electronically, and the volume and channel controls on the back of it are useful for keeping hands where they belong.

Chevrolet has also gotten into the habit of including a third LATCH system in the centre rear seat of its vehicles, an often-overlooked boon to harried parents who need a child within easy reach.

This might lead some buyers to believe that three LATCH-equipped seats can be used in this car, though, which is not the case ? a flip through the manual reveals that there are only five LATCH anchors for the three positions. That said, there is plenty of room in this backseat to place two LATCH seats and a non-LATCH booster ? or three adults ? side by side very comfortably.

Storage space is expansive. The trunk is enormous and well-designed. The touch screen lifts at the touch of a button to reveal a small cubby hole with a USB port for easy phone charging on the go. (And then your phone is hidden so you?re not tempted to play with it while you?re driving. Good idea, right?)

So, in terms of appointments, there?s really not much here to complain about.

When you get deeper into the inner workings, though, there are a couple of things worth noting.

The first is that the Impala?s fuel economy isn?t stellar. The engine that comes with this trim is a front-wheel-drive, direct-injected 3.6 L V6 that puts out 305 horsepower and 264 lb.-ft. of torque, mated with a six-speed transmission.

As an aside, this is a flex fuel engine that can run on E85 as well as regular-grade gasoline, should you be in an area where you are able to and choose to do so.

The other downside is a bit harder to put one?s finger on at first. The car is definitely capable: it powers down fine, it handles decently well, the ride is very smooth, and the 19-inch wheels that come standard stick to the road well enough.

But the car just lacks a little something. Character, maybe.

Manual mode on the transmission works as intended, but it?s controlled by two buttons on top of the shifter and there are no paddles. It does the job for those few people left who know how to shift manually to save fuel, but it doesn?t even attempt to simulate that visceral, tactile experience of driving that?s coveted by some. In certain circles, it would be said that this isn?t a driver?s car.

But perhaps that speaks directly to the audience Chevrolet is trying to reach with the Impala. There are plenty of people out there who don?t care how their car works, as long as it gets them from A to B with comfort and ease, and this one does that job most ably and for a very fair price.

Even more importantly to some, this car is built in Oshawa, which means that by selecting the Impala you?re truly buying the car your neighbour built. As an added bonus, the engine is constructed in Canada, which helps the economy on the home front, too.

It was easy to reflect on that as I spent my last afternoon in St. Petersburg, cruising down Gulf Boulevard and taking in the tropical architecture, the swaying palms, and the glimpses of sand and surf on the Gulf of Mexico. After all, there are as many Canadians as Americans in those parts, especially at colder times of year.

I soaked in as many of those last precious rays of sunlight as I could by opening the windows and the immense sunroof and bopping along to my favourite tunes, which sounded fabulous coming from the optional Bose 11-speaker sound system.

It occurred to me as I people-watched that the Impala 2LZ would be the perfect car for someone advancing in years but still feeling young at heart ? someone who wants the luxury and comfort of a Buick but doesn?t feel old enough to own one just yet.

If you pull that trick in Florida, there will be plenty of people wondering where you found the fountain of youth.

The vehicle tested by freelance writer Stephanie Wallcraft was provided by the manufacturer. Email: wheels@thestar.ca.

What?s worst: Fuel economy could be better, as could the fun factor.