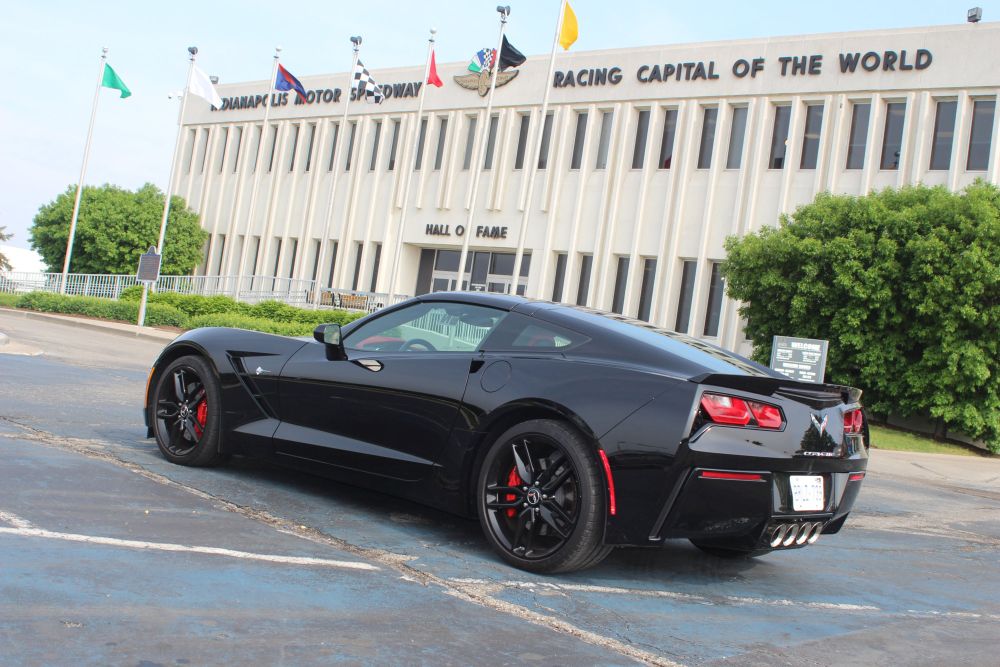 Corvette Stingray the logical choice for a meandering museum tour on our way to the Indy 500.

INDIANAPOLIS, IND. ? A road trip to Indianapolis in the month of May can have just one destination for a racing fan: the Indianapolis Motor Speedway.

As well as this weekend?s 98th Indianapolis 500, the purpose of my trip was the inaugural Grand Prix of Indianapolis ? the first race ever for Indy cars on the speedway?s road course.

There were other incentives for going as well ? not the least being the chance to revisit the Hall of Fame museum, located on the track?s infield.

Add in the opportunity to take in more automotive museums en route, and it?s a dream drive for any auto enthusiast.

All I needed to make the dream real was the right car ? say a 2014 Corvette. Given that Chevrolet is one of the two engine suppliers for the Verizon IndyCar Series as well as the official vehicle of the Indianapolis Speedway, it seemed like a logical choice.

So off I went in a new Stingray on a trip to automotive nirvana.

There are at least five different routes from Toronto to Indianapolis, sticking just to expressways, and every one of them has two or more world-class car museums either on or not far off them.

Although we tend to think of Michigan as being the centre of the auto industry in the U.S, it wasn?t always so. In the early days of the automobile, Ohio and Indiana both vied for that stature and both are rich in automotive history.

I?ve already been to most of the museums in Michigan so, although I?d happily visit any of them again, I chose to take in one I?d never seen: the Crawford Auto and Aviation Museum in Cleveland, Ohio.

Crossing the border at Fort Erie into Buffalo, I picked up I-90 through New York and Pennsylvania and on to Cleveland, with an overnight stop in Ashtabula, Ohio.

It proved to be a pleasant and scenic drive through rolling hills reminiscent of Ontario?s Northumberland County. By then I?d become quite comfortable behind the wheel of the Corvette, impressed not only by its awesome performance potential but also by its civility.

The Crawford is located in the Western Reserve Historical Society complex in Cleveland?s University Circle district, just minutes off the Interstate.

It?s an eclectic collection, heavy on cars built in Ohio and its neighbouring states, including such historic makes as Cole, Chandler, Packard, Peerless, Stutz and Winton.

Packard was headquartered in nearby Warren, which remains home to the National Packard Museum. Having been there recently, I bypassed it on this trip but recommend it as an adjunct to the Crawford on any visit to northeastern Ohio.

Packard went into the car business, the story goes, because James Packard complained to Alexander Winton about faults in the Winton he had purchased.

Winton replied to the effect, ?If you can build a better automobile, do it!? So, along with his brother William, Packard did.

Postponing a visit to Cleveland?s Rock and Roll Hall of Fame to another time, I let the Vette?s nav system direct me south to Columbus on I-70, through mid-Ohio race track territory, then west on I-70 right into Indianapolis, where I joined up with friends for Grand Prix qualifying the next day.

Intermittent thunderstorms and changing topography kept the drive interesting, as it alternated between forested hill country and flat midwest farmland.

Equally variable was the condition of the U.S. Interstates, which gave the Corvette?s suspension a serious workout.

Set to Touring position, the car?s variable-mode suspension system effectively took the harsh edge off the worst of the broken road surfaces.

After qualifying, we ventured down the main street of Speedway, the Indianapolis suburb where the race track is located, which was closed to traffic for a massive cruise-in that included several old Indy cars.

We also stopped in at the U.S. Dallara factory, part of which is open to the public. It includes several displays on race-car design and aerodynamics, as well as a caf?, where we spotted several famous racing faces ? Dallara is the sole manufacturer of today?s Indy cars.

Qualifying and the Grand Prix itself were well worth the 2,000-km round trip, but race day brought an extra bonus called the Celebration of the Automobile ? an outdoor display featuring scores of classic and collector cars in the infield plaza behind the speedway?s iconic pagoda.

After race day, when the crowds had thinned, I made my periodic pilgrimage to the Hall of Fame Museum, which houses a rotating collection of historic cars ? most of them Indy racers.

A showcase exhibit currently on display features the Marmon Wasp that Ray Harroun drove to victory in the first Indy 500 in 1911, and the car that Dan Wheldon won with 100 years later ? his last race before his fatal crash in Las Vegas.

With my appetite for race cars sated for the moment, it was time to head home, but which way to go? There was time in my schedule for just one more museum stop.

The Studebaker museum in South Bend is among the best marque museums anywhere, but I opted instead for my favourite of them all ? the Auburn Cord Duesenberg Museum, about two hours north of Indianapolis on I-69 in Auburn, Ind.

Located in the former headquarters of Errett Lobban Cord?s automotive empire, its art deco architecture makes the perfect setting for cars of the Grand Classic era.

As for the cars themselves, they?re primarily Auburns, Cords and Duesenbergs, with a supporting cast of Indiana-built cars and a smattering of other brands. What more needs be said?

Alas, the clock on my trip to nirvana was running down. Had I more time, I could have continued north into Michigan on I-69 to take in the fabulous Gilmore Museums near Grand Rapids, the R.E. Olds Transportation Museum in Lansing, or the Sloan in Flint.

Or I could have detoured into Dearborn to visit The Henry Ford.

Instead, I headed home, by way of Toledo and Detroit, already making plans for another Michigan museum tour, ideally in a car half as cool as the Corvette.

The vehicle tested by freelance writer Gerry Malloy was provided by the manufacturer. Email: wheels@thestar.ca.