Why I love my vehicle: Driving into the metaverse with a Tesla Model Y

Taking a Model Y for a night was all it took to convince Phil Kluba it was the vehicle for him.

Join the Conversation (0)
Toronto musician and entrepreneur Phil Kluba dreamed of owning a Tesla since the automaker first appeared on the market.

The founder of Press It, a company that offers live streaming services for concerts and other events, Kluba enjoys being at the forefront of technological innovation. So, it seemed only natural that he quickly fell in love with the Tesla.

He thought about buying one for years, often renting them to drive on vacations and, in one instance, to shoot fire out a flamethrower for one of his music videos.

It was only recently that Kluba decided the time was right to buy his own Tesla. He tells us why he loves his Model Y Performance.

“Now felt like a good time to take the plunge,” said Kluba. “With gas prices that are absolutely insane, and federal government incentives to choose an electric vehicle, the opportunity seemed right.

“Almost all of Tesla’s controls are accessed by the touch screen, so opening the glove box, running Spotify, playing video games, watching Netflix, and even making fart sounds is all accessible in the centre screen. This is basically an iPhone on wheels, so it’s the perfect car for me.

“One of my favourite features is the megaphone. It’s accessible from within the car or through the app while in sentry mode. You could be away from the vehicle while streaming the cameras to your phone and communicating to anyone around it through the megaphone in a Darth Vader voice. I love pranking my friends with it.

“The Model Y Performance also has a ‘light show mode’ where you engage the feature from within the car, get out and enjoy the show. The car then begins to play music, opens the trunk, and moves the windows up and down, until reaching the finale where it’s back to its original position — at that point, if the Tesla could bow, I’m sure it would. 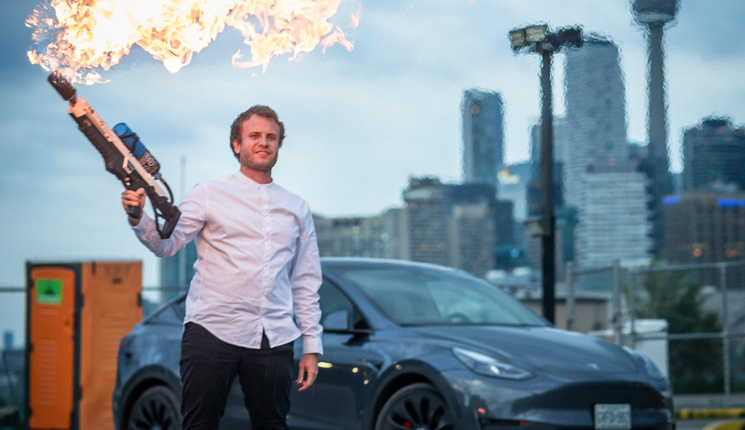 “I also use the front console to pull up the music video for my new track called ‘Fine By Me,’ where some dancers wear cut-outs of Elon Musk’s face and then we even were able to shoot flamethrowers from the windows of a Tesla I rented before buying this one,” Kluba said. “The video foreshadows the metaverse and expresses the belief that we could be living in a simulation.

“I went to Tesla and asked them to take a model for a test drive, but they offered to let me take a Model Y Performance for the night,” Kluba said. “After that, I was in love with this car. Everything about it is amazing. It’s the best car, I personally think, that money can buy right now.”

“The acceleration is incredible,” Kluba said. The dual-motor Model Y Performance offers an estimated 488-kilometre range, and it goes from zero to 100 hilometres per hour in 3.7 seconds. The motors operate individually, controlling the torque and the rear wheels, respectively. The result is an ultra-speedy SUV, great for open road adventures exploring the province. “It just goes like, zip. It’s superfast,” Kluba said. 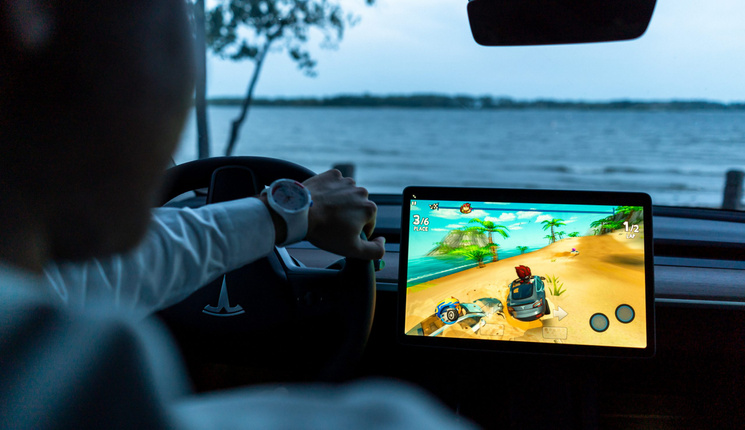 “I absolutely love the sound system. It is great in here, which is important to me because I’m really into music,” Kluba said. The system includes 13 speakers, a subwoofer and two amps. “The entertainment package in general is impressive. On the 15-inch screen you can watch Netflix as well as other stuff while you’re charging your car.”

“I’m very into technology,” Kluba said. “So, all of the cool features that the Tesla has, from auto-driving to self-parking, are great.” For example, summon mode allows him to click a button on his Tesla app and have the car drive itself to him (within a reasonable distance), as if the car is its own valet.

This article was edited for space and clarity. To be featured in Why I Love My Vehicle?, email us at wheels@thestar.ca. Erica Commisso is a Toronto-based lifestyle writer and photographer.