WHY I LOVE MY VEHICLE: 2022 Kia Telluride SX Limited Nightsky

Graduating class. The Kia Telluride is a family-approved upgrade that comes with all the bells and whistles

Join the Conversation (1)
Marc Royer is a trademark paralegal with a downtown intellectual property law firm. His wife, Stacey, works for the Ontario government. The two are always on the go. In addition to a Honda Civic, the Pickering-based family of four relied on a 2011 Dodge Grand Caravan to get around town.

Royer, who’s also a soccer coach for the Pickering Football Club, used the minivan to drive his kids to soccer, for carpooling and to carry all the equipment that’s needed for games and practices.

But after spending years as a Minivan Family, the family was ready for an upgrade.

With children who are older – Emily (11) and Noah (9) – plus a new puppy, Kobe, the Royers leaned toward a SUV since they no longer required the amount of stow-and-go room for things like strollers. Looking for a vehicle that still fit their lifestyle, they chose one with seven seats so that it could accommodate Marc’s parents.

The family had never considered a Kia, but after doing some extensive research, the Royers went with a 2022 Kia Telluride SX Limited Nightsky. Having put in their order for the car early July, they picked up the midsize SUV from Scarboro Kia in September. Royer tells us what he loves most about the vehicle.

“The minivan was older and served its purpose,” said Royer. ‘It needed some work and we hit that crossroad of either spending more money trying to fix it or replacing it. We did a lot of research to narrow it down between a couple of vehicles. We considered the Hyundai Palisade, as well as the Ford Explorer and the Mazda CX-9 – everything in that class that was highly rated. The Kia really stuck out for us although initially we were like, ‘I don't know about a Kia.’ But seeing all the reviews and how this particular model had won World Car of the Year, we said, ‘let's give it a shot.’ And I'm happy to say that it was the right decision for us.

“We ended up basing our decision on the test drive. We went all out and bought the top trim level they have in Canada for the Telluride. It was just below $70,000. We looked at the Acura MDX, and to get similar features we're knocking on $100,000. Plus, Kia has a great warranty. We like everything about it. 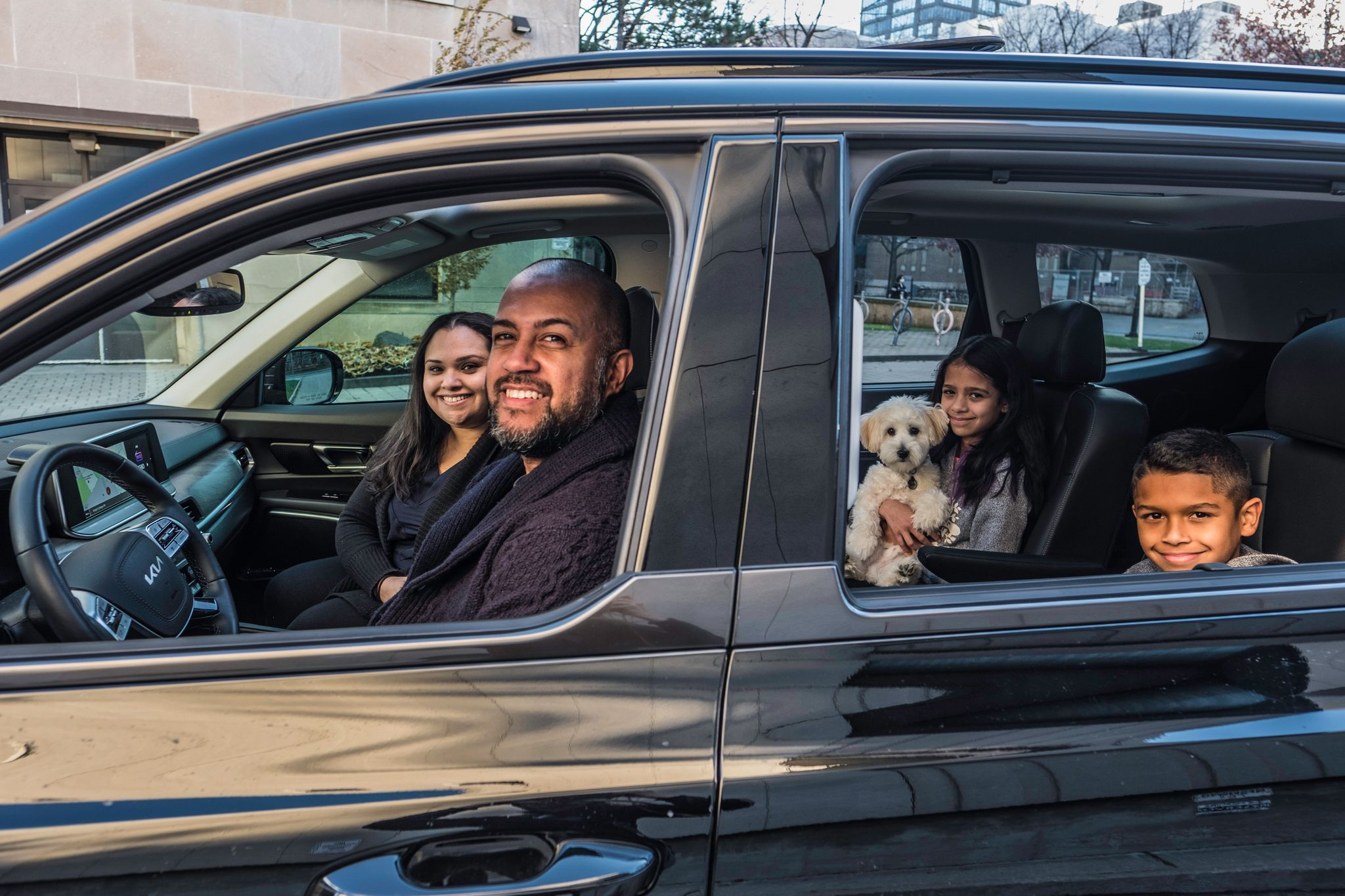 “Both my wife and I want to get behind the wheel because of the newness of having the Kia. I usually take the Telluride for things like transporting the kids because it’s a lot more spacious for them. I take my daughter to her soccer practices twice a week, and I pick up a teammate of hers with their bags. We're working from home right now, so commuting isn't such a big deal, but for running errands, groceries, and what not, I'll usually take the Kia for the convenience and the cargo space that it has. Everyone's a lot more comfortable [in the Telluride].

“There’s a sort of stigma with Kia and the designs of their previous models were not too appealing, but they've changed their game. Kia’s also rebranded, and because they’ve changed their logo, people have stopped and asked us about it, or I can see drivers’ heads fully turn trying to look and figure out what it is.

“We really liked the esthetics of the Telluride – it’s really distinct. The body styling is very nice. The front is very aggressive looking, and we really love the way the headlamps light up: it’s these DRLs that have an amber rectangle and it looks really cool. And then there’s the look of the waterfall tail lights. So we were just kind of sold on the styling of the truck, and we picked up the Nightfall package where everything – [the grille, roof rails, badging, and skid plates] – is black. We just thought it looked really sharp.

“It comes loaded with a ton of features you don’t see on many non-luxury cars. For the price paid, that was a big thing for us. Little things – that might not be a make-it-or-break-it thing for a lot of people – like the heated and ventilated seats in the second row are a nice touch. Most parents might not care about that, but I like having that luxury for me, so why wouldn't I want that for my kids, especially knowing how they complain about being hot one minute and then cold the next minute. Now they can remedy that themselves and I don't have to worry about the climate in the cabin. You know the feeling when you jump into a hot car with black leather? With the cooling seats, your back, butt, and legs stay nice and cool even though the car has leather seats.

“The difference technology-wise between the car and the 2011 Dodge Caravan is astronomical. The head-up display is a nice option. There’s Apple CarPlay that we didn't have before, cameras galore for backing up and changing lanes. Even when you put the car in cruise control, they say keep your hands on the steering wheel, but if I don't have my hands on the steering wheel, it keeps the car in the lane. There’s a cabin talk feature for people all the way in the third row. You know how sometimes with wind noise and whatnot it's kind of difficult to hear [inside the car], but you can push the Passenger Talk button and it amplifies your voice so that you can communicate through the speakers of the car.

“It's come a long way, you know, with the heated steering wheel and memory seat that’s in a lot of cars now that we didn't have in the Caravan. Even though the Honda – it’s a 2016 – is not that old, the features in the Kia are light years ahead.

“And look,” said Royer, “I grew up learning to drive in a minivan and I was just done. I didn't want to be the minivan dad anymore. It's nice to be in this SUV that’s got 20-inch [black alloy] rims [and part of the Nightsky package]. Although it's not nice lifting those and storing them for the winter, but what can you do? [Laughs]

Being the first winter with their new Telluride, Royer feels confident tackling the season, equipping the SUV with snow tires and testing out some of its features.

“I’ve tried the remote start through [Kia Connect, formerly called] the UVO link,” said Royer of the service that’s currently free for the first three years. “[It’s a service] where I can [remote] start the car and adjust all the settings through the phone. It's pretty cool. I've been notified a couple of times through the app that I've left the car unlocked, so that's a nice reassuring feature.”

Then there’s the community that comes with having the car.

“There aren’t many Tellurides out there,” said Royer. “If I see another Telluride owner on the road, there’s a wave or a thumbs up. It's not a sports car or sports bike – and you know how those riders always get a wave and whatnot – so it was surprising to see that when I come across other Telluride owners. That's different. It’s its own little club. I’m honestly very happy with our decision.”

“The Telluride's got a Harman Kardon sound system,” said Royer. “So, when I’m not with the kids and some 90’s hip-hop or R&B comes on, I crank up the volume. You know those tunes? You’ve got to crank those. It feels good on my errands, and I just enjoy the drive.”

“I’ve never had a car that had memory seats,” said Royer. “My wife is five feet tall; I’m six feet. Our last car she got adjusted for her and half the time when I jump in, I bang my head against the roof or my knees against the steering wheel and I have to adjust the seat. With the Telluride, when you get out and shut it off, everything is set back to default position so it’s easy for any driver to get in. It’s great when it's raining or minus – 20 C outside. You don’t have to stand outside of the car pushing this button watching the seat slowly move into place, especially when you just want to jump in your car, you know?”

Graduating from their minivan life, Royer feels proud to have a sharper vehicle for his children to drive.
Royer explains: “When my daughter wants to learn to drive and gets her licence, it won’t be ‘Dad, can we borrow the minivan?’ anymore. She can jump into the SUV with a friend, and they won’t feel the embarrassment of jumping out of a minivan wherever they go.”