With ample storage, an elegant profile and the ability to park it in a limited space, the Genesis SUV meet all this family’s needs.

Article was updated 15 days ago

Join the Conversation (1)
When Peter Brough and Abby Yew moved from downtown Toronto to the Leslieville area, the couple realized they would need a new car.

Although the couple is working a mix between home and office – Brough co-owns Labour, a small creative communications agency in the Junction, while Yew is the head of marketing at Wattpad, a global storytelling platform – they need a vehicle to take their kids, Beckett, 5, and Leonie, 3, to daycare, and to visit their parents, who live in Kitchener-Waterloo and London.

The family of four had relied on a 2018 Audi A4 wagon, but it didn’t have the cargo space they needed when their daughter was born. When that lease came up, they looked at their options and found the 2021 Genesis GV80 – the South Korean automaker’s first SUV. They tell us why they love their vehicle.

“We've always liked the brand and kept up with them,” said Brough. “My first experience with Genesis was on a trip to (South) Korea with Abby and her parents and seeing it there because they weren’t in North America eight years ago. My dad had the sedan for a few years, which we’ve driven and really liked it. But the real selling feature was probably when Tiger Woods got into an accident in the GV80, and he survived. That was the best safety promo you could have.” 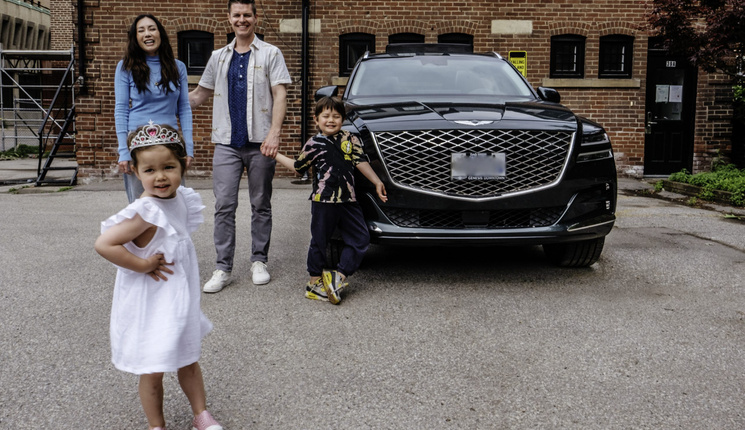 “We reviewed and researched online, and when we reached out to Genesis, a sales rep basically came to our house and took us out for a test drive explaining the features as we went,” said Yew. “We kept it in mind, and it checks all the boxes for me in value. It’s very loaded, and I like the esthetics.

“We started with the esthetic before we discovered the features and function of the car. It's sleek, elegant and has a low profile, but it feels powerful at the same time. We got the Cardiff Green, it’s a subtly shifting dark greenish black colour. It’s a bit of a showstopper,” she said.

“I like the aggressive nature of the front – the lines, the lights and the grill – and the size,” said Brough. “We like having a bit more size and aggressiveness on the wheels as well. It’s different and a bit of a shake up for the category where everything sort of been the same for years. We get a lot of people asking about it, because there's a novelty to the brand, and there’s not many on the road. The first comment is that it’s a great looking car.”
“I do have a lot of pride driving the Genesis because I am Korean,” said Yew. “I feel like I’m witnessing a sort of surge of soft cultural influences from Korea. I think there is a definite shift in cultural mindsets about expanding your acceptance or the perception of luxury.” 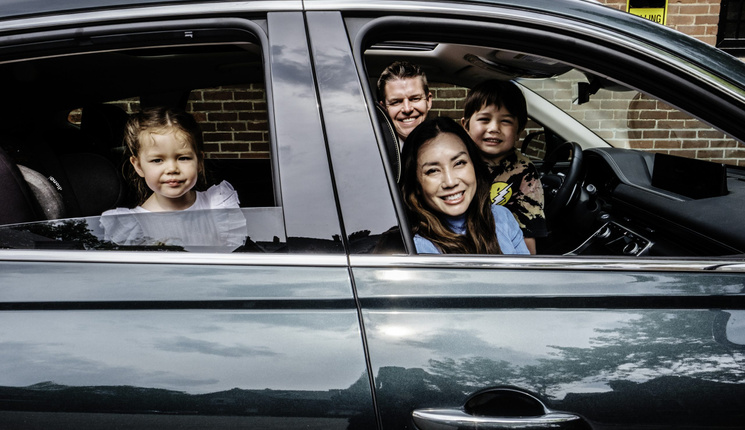 “Abby and I love the drive itself,” said Brough. “It's got a powerful engine, and it drives like a sedan and the feel of the drive has been great.” Yew said the vehicle also strikes a balance between elegance and performance. “It’s very easy steering,” she said.

“We were looking for trunk capacity,” said Yew. “The GV80 has a third row that flips out of the trunk, and that felt handy if we have additional passengers. We were also cognisant of the length of the car. We have a very specific parking space at the back of our house that has probably two to three inches on each side that we can parallel park in. We got this trim level because I really wanted the 360-degree parking camera so I can park this thing.”

“It’s like the company elevated every feature just a bit more than its competition,” said Yew. “It’s very accommodating and seems to anticipate your next move. I’m delighted by the fact that the seats sort of auto adjusts when you open the door. I think that’s a really smart detail. As I’m approaching the car, it auto unlocks. I can have a million groceries and holding the kids, but I can push a button and the trunk opens.”