The Ron Fellows Driving Experience put us behind the wheel of three different 1LE-equipped Camaros from the 4-cylinder RS to the manic 650-horse ZL1.

Join the Conversation (0)
Sitting in the parking lot at Canadian Tire Motorsport Park surrounded by new Corvettes was a 1989 Camaro IROC-Z in full vintage livery drawing journalists towards it like a moth to a flame. But it wasn’t just any old Camaro. This one ran in the 1986-92 Player’s LTD/GM Motorsports series.

Available through dealer special order, this Camaro was a street-legal racecar fitted with a roll cage and a tamper-proof sealed engine. The Players LTD was a one-make series and all the cars that raced in it were identically equipped F-body Camaros or Firebirds.

In 1986 when a financially strapped Ron Fellows bought his first Camaro to enter the series, it would forever change his life.

He not only used that car to race but also to commute, even in winter. Swapping on a set of snow tires and using his hockey equipment as ballast. Ron was able to pay for that first car through monthly installments but racing in the Player’s series soon earned him a paycheck and ignited his career. He was able to make a living doing what he loved to do.

Racing and the harsh Canadian winter had taken its toll on his first Camaro, so in 1989 Ron traded up to the car you see in the photo. Equipped with bigger brakes, an engine oil cooler, an aluminum driveshaft, and other mechanical upgrades it was a much better car. The option code from the dealer was 1LE, one of the first GM products to wear that badge. Ron won the Players LTD/GM Motorsports series that year. 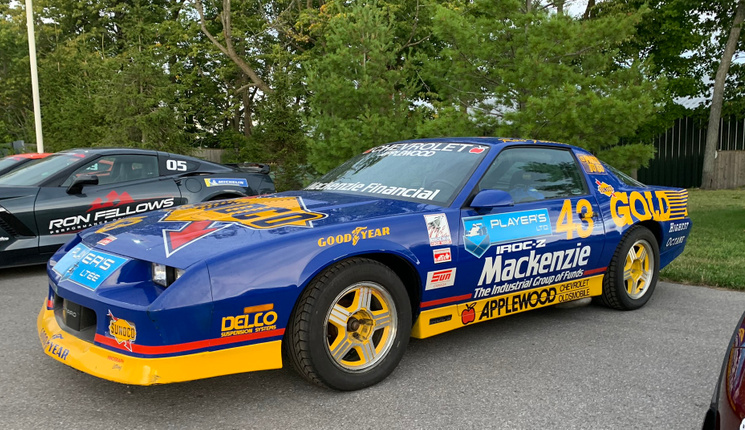 Quite fitting, then, to be at Canadian Tire Motorsports Park (CTMP) to drive a bunch Camaros. Also fitting, all of them were equipped with the 1LE track pack.

Ron's co-owner of CTMP, and they’ve made great strides modernizing and bringing the old F1 circuit back to its former glory. This was the first track he raced on with that ‘86 IROC-Z, so it was quite an honour to take part in his driving school on a track he knows so intimately.

Running from May to October the Ron Fellows Driving Experience can put you and a small group of your office buddies behind the wheel of some of GM’s highest-performing cars like the C7 Corvette, Cadillac’s V-Series, or a range of Camaros.

“If you can race here [at CTMP], you can race anywhere, ” remarked Ron at dinner. This wasn’t the first time I’ve heard him say that, and I’m sure it won’t be the last. But with 10 corners spanning just under 4 kilometres, CTMP is an adrenaline-pumping thrill ride that can challenge even the greatest drivers in the world.

I’ve been fortunate enough that my job has allowed me to drive at CTMP on more than one occasion. And every time I do, I learn more about the track and my own abilities. It’s an absolutely wonderful experience if you’re into this sort of thing, even more so under the guidance and excellent tutelage of the school’s pro instructors. One of them being Sam Fellows, Ron’s son. 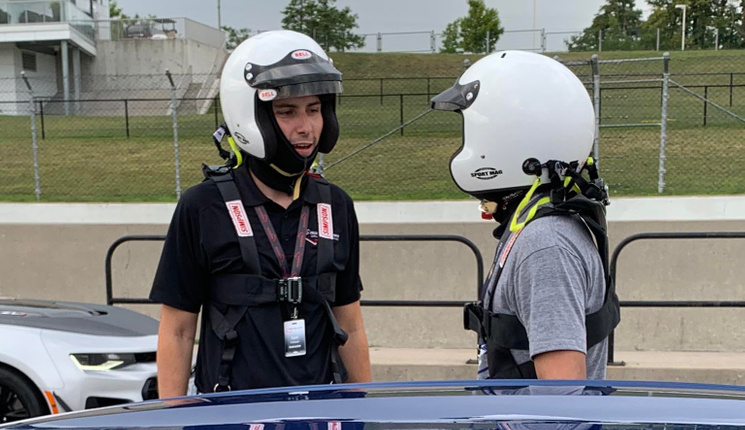 Sam calmly guides us out onto the track, giving valuable tidbits of information over radio as we exit pit row.

I’m in a Camaro RS 1LE equipped with a turbo 2-litre 4-cylinder and a manual transmission. Sam is in front slowly picking up speed, patiently explaining the nuances of each corner demonstrating the correct line to take through them. 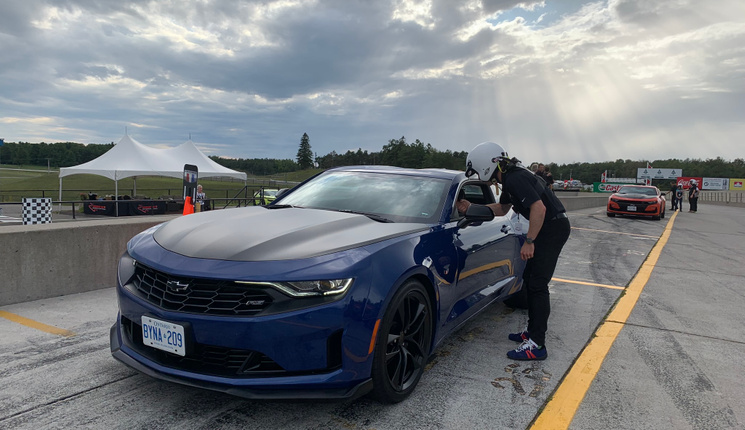 After the first lap, Sam goes faster as I do my best to keep up. Lead-follow is a great teaching tool because you follow a pro that knows how to approach each corner, when to brake, when to get back on the gas.

Sam keeps a watchful eye on his rear-view mirror making sure that I don’t fall too far behind. The closer I get to his tail, the quicker he goes. By the third lap, we’ve picked up the pace significantly.

There are only a couple of clues that the Camaro I’m in doesn’t have a big V8 under the hood, and one is the sound. Not bad by any measure, just that the atmospheric LT1 V8 in the SS is a sonic marvel. The other clue comes when turning in, and that’s a front end that feels lighter, more eager to bite into the tarmac. You still get the same responsive, tingly steering, and the robust feeling 6-speed manual with satisfyingly chunky throws.

Even on a fast track like CTMP the 4-cylinder Camaro doesn’t feel down on power. Credit the 295 lb-ft of torque available at 3000 rpm. Corner exits are a joy, as you can really get into the power exploring the nether regions of the tach without fear of ending up ass-first in the wall. It’s only on the long back straight that the 4-pot Camaro feels like it runs out of steam. But we still easily top over 180 km/h before having to stand on the brakes to slither through the esses that link corner 8 and 9.

Hopping into the SS, everything is the same and everything is different. The 6.2-litre direct-injected V8 still uses old-school pushrods and overhead valves. In terms of engine design, it’s a dinosaur. But in terms of character, sound, and power delivery, it’s sublime. A suitcase bomb unlocked by a shift-it-yourself six-speed stick. Its lumpy idle is the soundtrack of American muscle.

As good as the modern turbo 4 is, the tired cliché there’s simply no replacement for displacement plays like a broken record in my head. The Camaro SS 1LE is easily one of the best out-the-box track tuned cars in its price range. 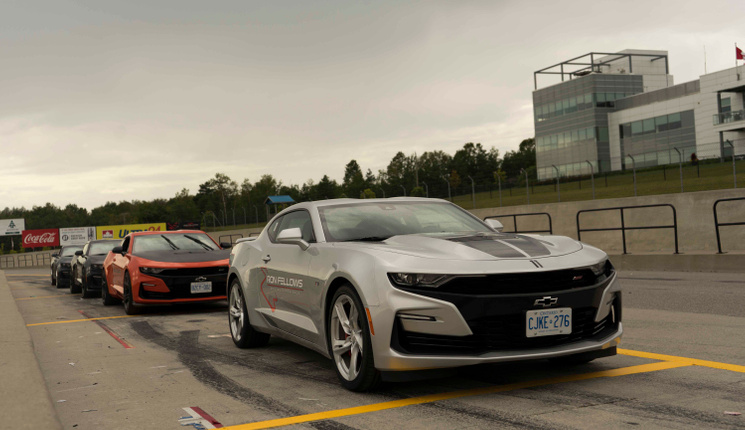 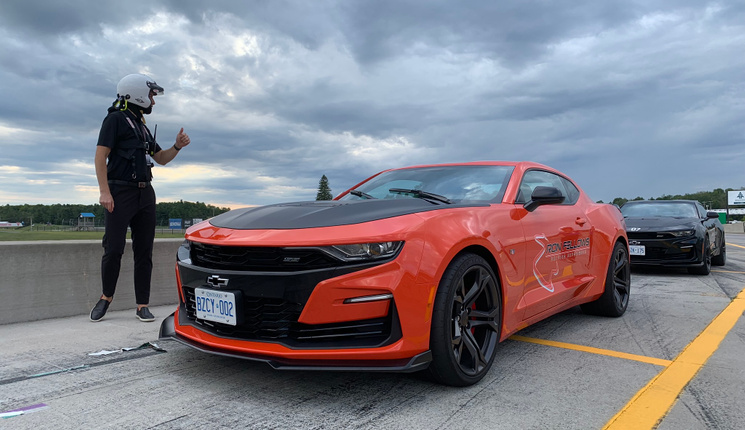 455 hp and 455 torques make all the difference in the world and no turbos mean instantaneous throttle response. Exiting a corner with the SS is a different story than in the small-motor Camaro. You cannot floor it every time, or at least you shouldn’t. With the drive mode set to track, the traction overlord allows for a smidgen of hooliganism. Want to let the tail hang out? Apply throttle early and hold on while you feel the magic that is GM’s Alpha platform. Let up on the go-pedal a bit and the tail tucks back neat and tidy.

The SS 1LE gets even more cooling, even wider wheels, an electronic limited-slip diff, bigger brakes, and GM’s trick magnetic dampers. You also get better seats, a dual-mode exhaust, and stickier tires.

On the track it feels indestructible. Capable of lapping all day without breaking a sweat. Where I was shifting to fifth in the 4-cylinder Camaro, fourth was more than enough on the SS. With the V8 you can do the entire track in third and fourth.

My time in the SS is much too short, but no bother as there’s another Camaro waiting. This one has 11 heat exchangers, and bumper cutouts big enough to swallow a Miata. It’s the ZL1 and with 650 hp and 650 lb-ft of torque from its supercharged LT4 V8 heart, it’s the most powerful road-going Camaro ever made. And this one is a 1LE, natch, so it adds dive planes on the front and a giant carbon wing out back for real downforce. It also gets a set of Mutimatic’s trick spool-valve dampers that replace the magnetic shocks. 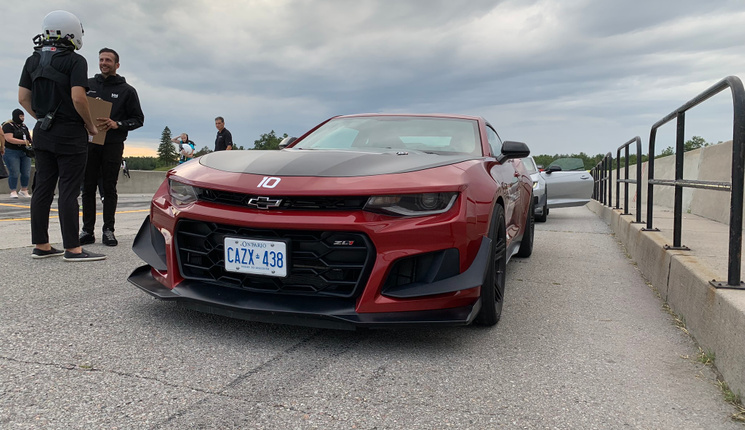 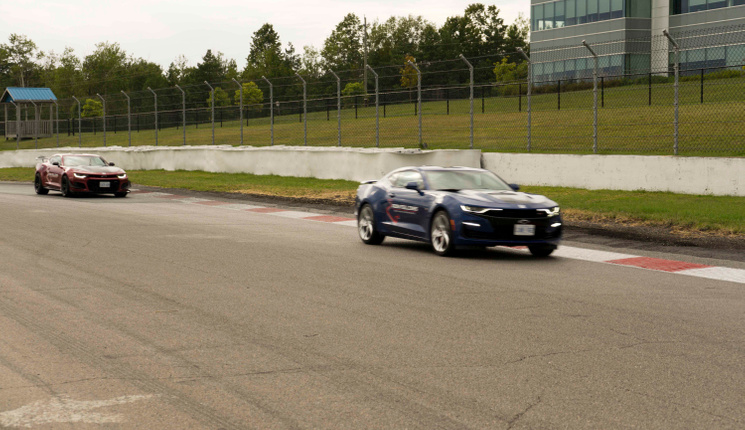 Exiting turn 5 and heading towards the back straight requires restraint in a car with this much firepower under the hood. Your mind says floor it, but the ZL1 has so much torque that it struggles to put all its power down. In track mode the traction control light flickers furiously.

Once its finally hooks up the ZL1 will out accelerate the starship Enterprise. And because it had a quick-shifting 10-speed automatic successive gears arrived faster than I could ever hope to shift had it been a manual. In what seemed like no time at all, I’m on the brakes, HARD! Massive 15-inch front brake rotors scrub off speed like you’ve hit a wall.

Steam-roller tires with a 305 section in the front and 325 in the back produce over 1.1g of grip, meaning that you can chuck the ZL1 into the tighter corners with reckless abandon, and it will hold on like a petrified feline in the long, fast sweepers.

Those brakes were confidence-inspiring with a super-firm pedal goading you to push deeper into every corner. Although by the end of the day that pedal did grow a bit mushy. Seeing as I was in the last group to drive the ZL1, after it had been lapped all evening, I couldn’t blame the car. The Camaro in all its forms is a world-class handler, no longer relegated to the back of the line when compared to international rivals.

It’s shocking what you can learn about your driving abilities in just a few hours, it’s also shocking just how good the Camaro actually is around CTMP when given the chance to really flex its muscles.

And there’s probably no one better to show you around this legendary circuit than Ron and his team.