Putting two little Fiats through their paces on track.

Join the Conversation (0)
I encountered more than a few surprises when I stepped into the Abarth 500 and 124 and tackled the main track at Ridge Motorsports Park in Shelton, WA about 90 mins south of Seattle.

First of all, there was the track itself; it’s one I’d never heard of, but it’s a remarkable place with heavy braking zones, fast sweepers and even a miniaturized version of the daunting corkscrew at Laguna Seca Raceway in California. There’s a whole heck of a lot to like here, so it was going to be up the cars to do the place justice.

Considering the stats of each, though, I had high hopes for the two little bottle rockets from Fiat.


First of all, there’s the 500 Abarth; it’s a microcar, yes, but it also happens to make 160 hp and 170 lb-ft of torque, more than enough to get this little sonofagun and its 1,142 kg curb weight going in quick order.

The power comes from a turbocharged four-cylinder, fed to the front wheels via either a six-speed automatic, or six-speed manual. I was lucky enough to sample them both, but chances are anybody who knows a thing or two about tracking a buzzy little car like this knows one thing: it’s gotta be the manual, all the time. Plus, with an exhaust report like this, I like to be able to rev it till my heart’s content.

Much has been made about how obviously Fiat has, shall we say, “enlarged” the Abarth’s exhaust note, but I say have at it; when you look all low (thanks to lowered springs), and squat and bulldog-y like this, you can sound however you want and to be honest, I say the louder, the better. You’re a tiny little car that outperforms much bigger stuff than you; g’head! Yell about it! 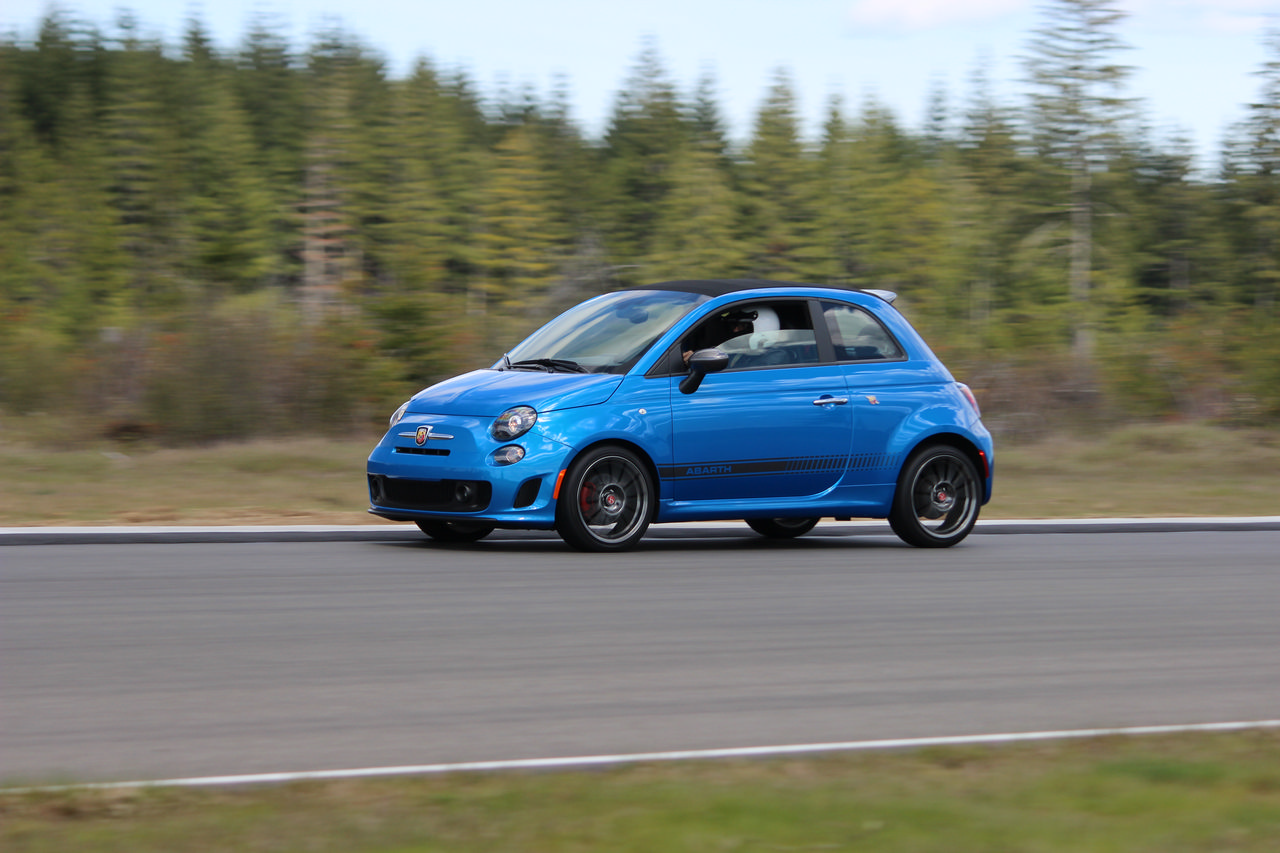 The first thing you’ll notice once you step inside, however, is not how small it feels in here, but more like how big it feels in here compared to what its exterior looks suggest. Even with the deeper sports seats the Abarth gets, you still fee like you’re sitting up quite high, which is likely what most owners would want considering that this is a city car, and outward visibility is key in city driving. Less so for track work, of course, but I was happy that even with an XL crash helmet bracing my melon, I had no trouble fitting inside; and here I thought I would only be able to drive the cabriolet 500C version with its roof open!

It’s not just the seating position that’s upright, either; everything in the 500 is somewhat upright. The pedals, shift lever, windscreen, steering wheel angle – all very vertical, which make it all easy to reach, if not a little uncomfortable. The pedals, especially, forced me to point my feet up, causing fatigue to the muscles atop my foot and at the base of my shins. I’m also not a huge fan of the huge steering wheel; having a chunky rim is nice, but when it covers such a massive diameter, it just feels weird, as if it had one of those steering wheel covers that cabbies like to use.

You’ll get over that, though – oh, you’ll get over it, all right, as soon as you start to really delve into what the 500 Abarth has to offer. Put simply, when it comes to driving dynamics, that’s quite a lot. 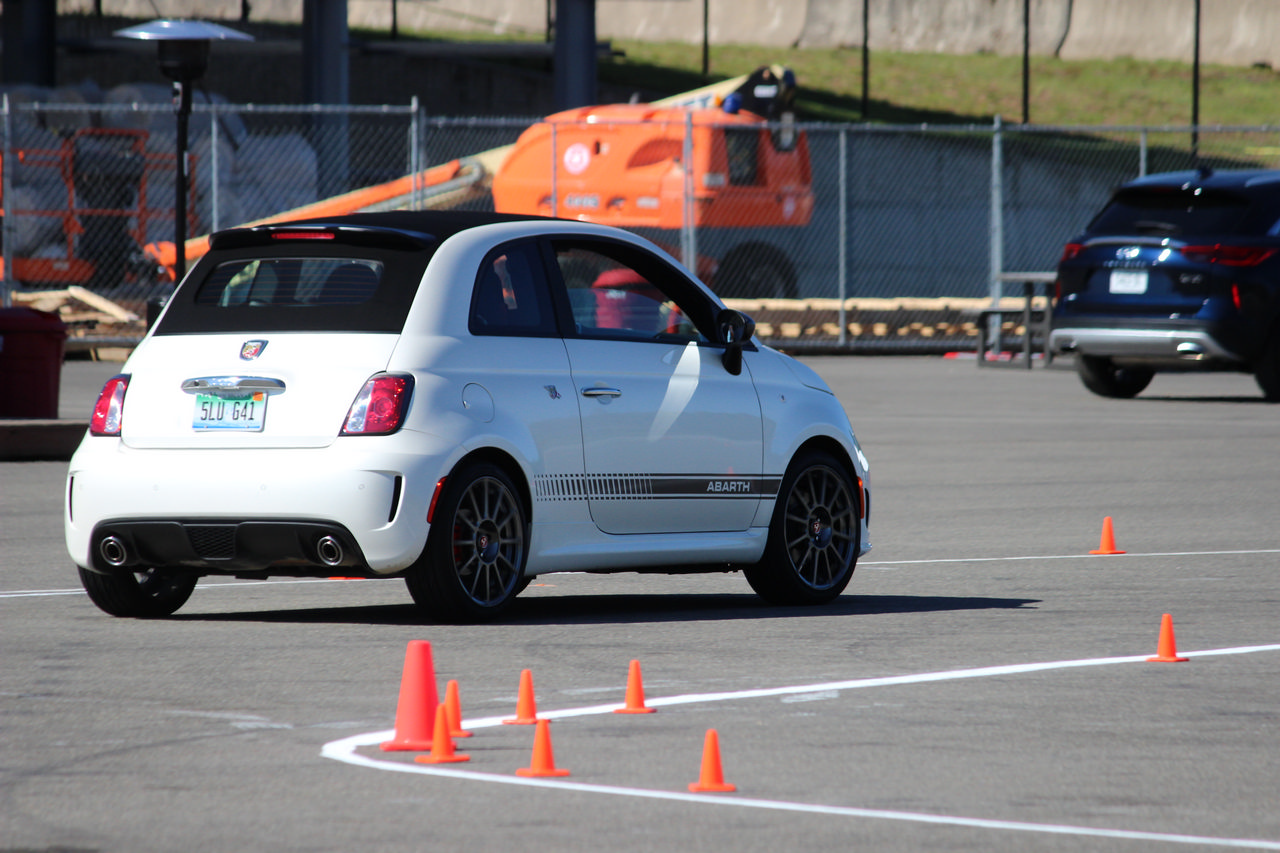 It should come as no surprise that it has the acceleration; you do have to get that aftermarket-style tach needle sweeping past the 5,500 mark to reach peak hp, though, as there is some turbo lag but once you do, this is a rocket of a thing that will get you to the next braking zone in quick order.

Then, once you do get there and it comes time to turn in, best believe you had better be ready because this here’s go kart-like in its turn-in response; the quick rack, sticky tires, twist-beam rear axle and short wheelbase all combine to have you holding on for dear life as you saw away at that enormous wheel.

The most surprising bit for me, however, is that while it was fun on the autocross course, the 500 Abarth was also a willing partner on the big track, too; I though that its front-wheel drive configuration and short wheelbase would have it a little more nervous through the big sweepers, but that wasn’t really the case. It remained confident even in those circumstances, which bodes well for its performance on wide sweepers at speed on the highway in the real world.


The 124, of course, is a whole other beast. First of all, it’s rear-wheel driven, meaning a more traditional sports-car like attitude. It’s also larger than the 500 and makes more torque (184 lb-ft) but it makes the same 160 horsepower from its 1.4L turbo four-banger. It’s also heavily developed by Mazda, while the 500 is a Fiat creation so you know the 124 knows a thing or two about what makes a sports car tick.

The stats say it has more legroom than the 500, but since you sit lower and the footwell is narrow, I can’t say that I really felt that, though I do much prefer the pedal angle. While that’s fine, it’s a little tougher to get over the fact that your right leg just has very little room to move as it’s jammed against the firewall. And unlike the 500, I did have to drop the top on the 124 in order to fit my giganticized head in there. Luckily, like in the Mazda MX-5 with which the 124 shares so much, that can be done from the driver’s seat with one hand.

Unlike the MX-5, however, the 124 gets a turbocharged engine and all the extra acceleration and top speed that comes with that; it’s something MX-5 lovers have been after for awhile. Before you get all “why does the student get it, when the master doesn’t?” know that while fast, the 124 still isn’t going to blow your socks off in terms of acceleration, even if you are running premium fuel as is recommended. You’ll feel more speed, but the transmission does come from the previous-gen MX-5 so while it’s athletic, the ratios make it so you can do a little grand touring here and there, too. 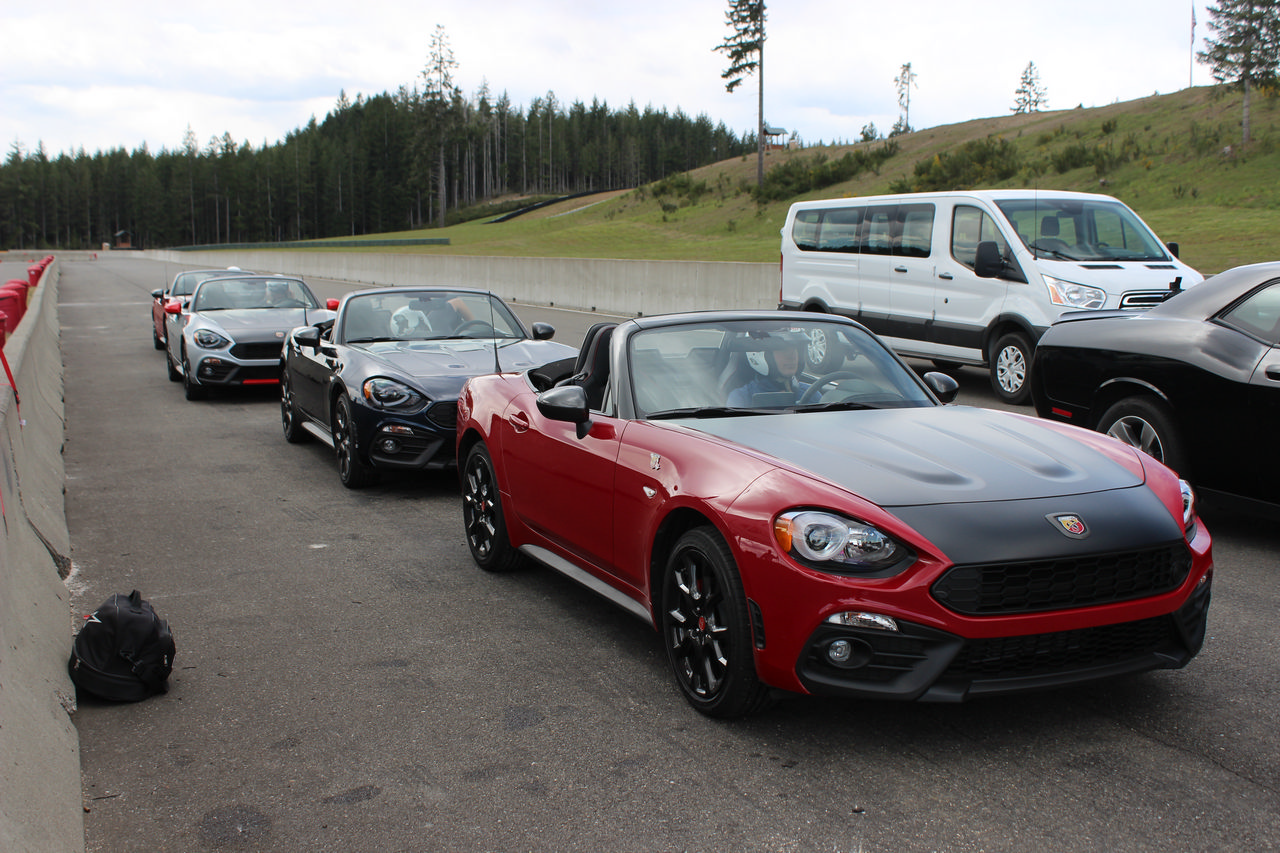 Still, though; out on the track, there are few vehicles out there that are as adept as the 124 about making even the most pedestrian driver feel like a bit of a track star, if they let it. Like the MX-5, the chassis is perfectly balanced, making for quick turn-in but with a level of steering feel that ensures you know what’s going on just beneath you. The rear-wheel drive set-up and more powerful engine, meanwhile, means you can even get the tail out a little if you’d like, as we were encouraged to do on a damp skidpad during the event.

That was fun, but the real fun – like the 500 – was out on the big track, where the 124 really gets to strut its stuff. And where I felt like I was actually in a race car thanks to the low seating position compared to that of the 500. Even though the 124 remains a small car, it feels right at home in this environment as there is such a great balance between straight-on acceleration and the ability to nicely balance the car through the faster sweepers that make up the track at Ridge. No snap oversteer, just a nice, progressive response from the front axle and the rear, the 124 rotating nicely through turns and always keeping you apprised of what’s going on beneath you. 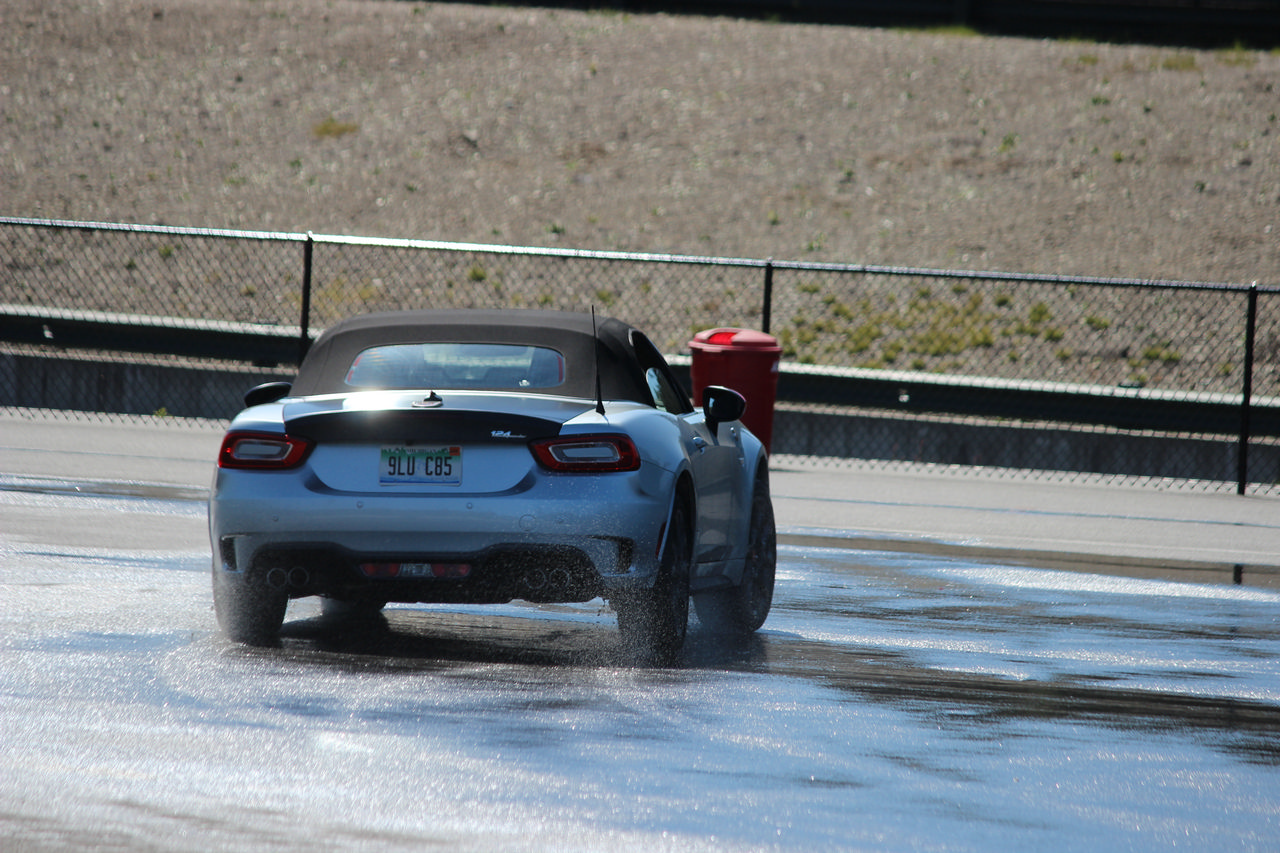 I guess the question that still remains is whether or not you go the 124 route, or the MX-5 route. Anybody who thinks they’ll be getting the better price on the MX-5 will be surprised to find that it starts at $31,795 – turbo motor and all – while the MX-5 roadster starts at $32,900, the targa-syle RF at $39,900. So you can’t just say “I want to spend less, so the MX-5 is the way.” The Abarth, however, starts at $35,295; still undercutting the RF, but representing a bit of a premium over the roadster. They both handle well, they both come with identical infotainment and they both have easily-retractable convertible tops.

What you really have to do, then, is decide if you want to join the cult of Miata – and it is very much as cult-like as it gets in the car world – or maybe give something else a try, maybe break away from the mold a little (with a little more power to boot) and go with the Fiat.

The choice is a tough one, but at least we are lucky enough to have to make one.