A proper manual makes the Supra an even better sports car.

Join the Conversation (0)
The thing about the latest version of the Toyota GR Supra is that once you sift through all the guff about its connection with a certain Bavarian manufacturer and so on, underneath is a really, really good car. It gets two great engine choices, both turbocharged; it looks as unique as can be even four model years after its debut; it handles like the sharp performance instrument it’s meant to be and at $68,640 for the six-cylinder version, it’s reasonably priced for what it is.

No. I was never bothered about the partnerships required for its coming into existence; I was more bothered by a much more granular aspect: the lack of a manual transmission option. In my eyes, this is the purview of any true-blue sports car. While that transmission type as we know it is short-shifting its way off the mortal coil faster than you can say “battery-electric vehicle”, I plan on holding on to the options we have for as long as I can with the tippy-tips of my fingers…and now, for 2023, Toyota’s going to help me and many driving enthusiasts like me to do so. 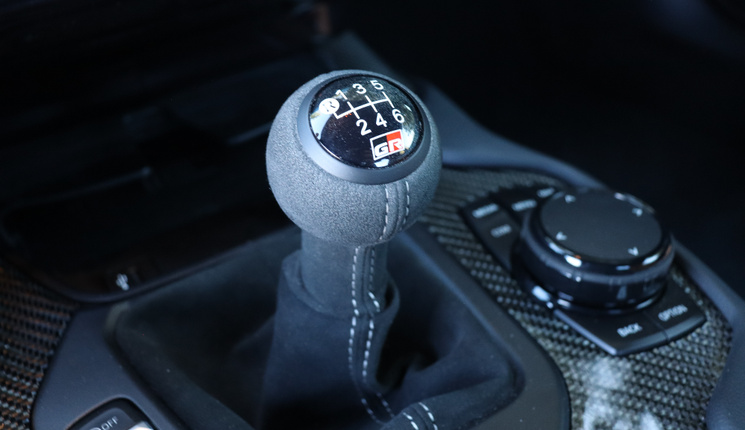 You see, for 2023, a proper six-speed manual transmission (with a clutch yes a clutch!) can be had on the Supra, as long as you opt for the I6-powered Supra 3.0 – in North America. In other markets, the manual is available only on the four-cylinder Supra 2.0.

This is not a case of “just give ‘em what we got; they’re just happy to get one” either, but a ZF unit developed in-house with Gazoo Racing (hence “GR”) specifically for the GR Supra MT.

At any rate; we were given a go at Vancouver Island Motorsport Circuit in the three-point-oh, and not just any 3.0, either, but the A91 version which adds red badging, Alcantara shift knob, red strut tower brace, and my favourite feature of all: a tan interior with black inserts that looks absolutely gorgeous. I’ve said it before: brown/tan interior can either be very good or very cheap-looking and here, it’s thankfully the former and in my mind, it is the best way to finish the Supra’s interior. Power-wise, it makes the same 382 horsepower and 368 pound-feet of torque as the standard 3.0

One thing that hasn’t returned to the ’23 GR Supra MT A91, however, is an extended rear spoiler first seen on the ’21 model. That’s too bad, I guess, as it did add even more visual flare to the proceedings, but it’s not like the Supra is a shrinking violet. 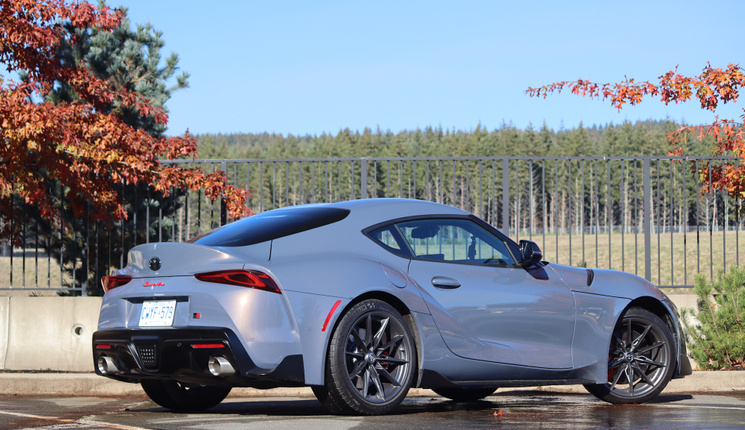 Otherwise, the A91 – especially in the Cu Later grey paint job seen here – is a stunner. The 19-inch 10-spoke alloys finished in a dark gunmetal are right on – especially when shrouding red brake calipers – and there are a bunch of neat little details like the red inserts behind the headlight lenses and contrast-colour wing mirrors, which do well to compliment the window surrounds, rear diffuser and vents on the front fenders. Outside and in, I love it.

Sliding inside the Supra is not as challenging as it looks from the outside – even for a taller gent like myself – but once in, there’s a little work to be done. The toughest thing is the visibility. Over-the-shoulder blind spots are omnipresent – which comes as no surprise, considering the tiny rear window – but it’s the way the roof drops so far down to the side windows that was the most challenging for me. If you were to look at me sitting in the car I’d look like Batman, with only my chiseled chin and cheeks visible beneath a Toyota-designed cowl. Add the long hood and the very cab-rearward profile, and you really do have to start trusting your knowledge of the exterior dimensions of the car. 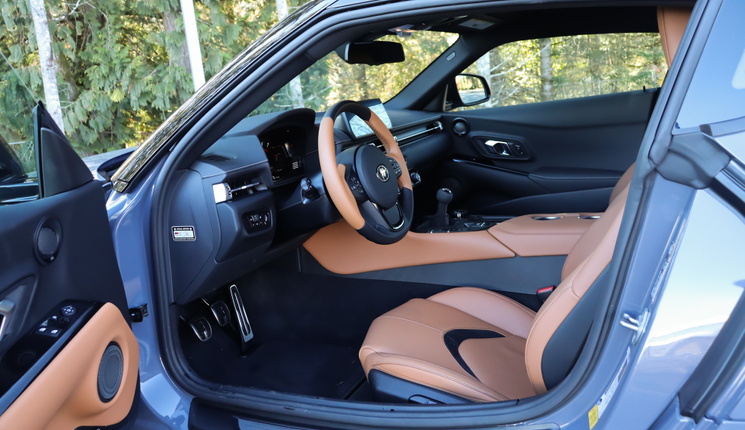 After that, of course, everything comes nicely together. The cabin is snug, so all the controls are well within reach, and other than the visibility factor, the seating position is right on. The seats themselves, meanwhile, are comfortable yet supportive – a great mix of the two, which is important in a sports car.

Of course, when out on the track your over-the-shoulder blind spots aren’t as much of an issue. You need to be able to achieve a good look forwards, however – any racing instructor will tell you that your eyes are either at the top of or near the top of the list of tools required to be successful. In that light, the Supra is fine.

Which means that out there, you get to focus on the task at hand and really enjoy a car that really likes this environment. 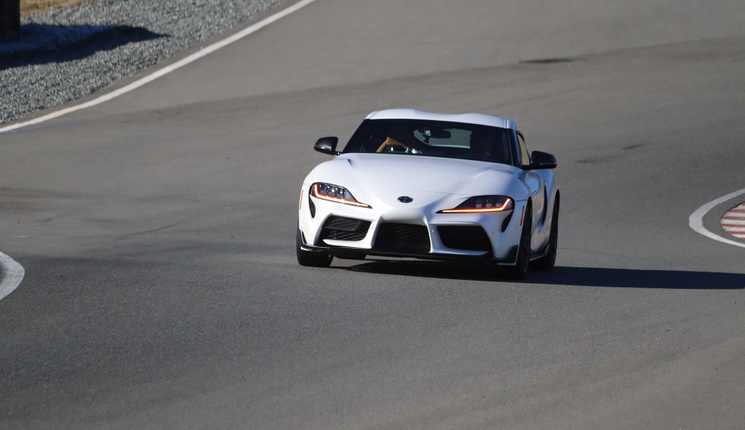 You see, the GR Supra MT is razor-sharp; the steering is so direct and well-weighted that you hardly believe it’s electrically assisted and even though it’s turbocharged, that’s disguised as well with smooth power delivery that avoids the peakiness usually associated with these kinds of powertrains. So, you dip into the throttle and activate what feels like an elastic band being released, snapping you down the track at VIMC with authority and a great sound through the twin-tailpipes.

This track is an interesting one to take the Supra on; it’s very twisty, it’s narrow and it’s undulating with hardly a straight to speak of. Having sampled a number of vehicles here, I found it to be a track better fit for stuff like the Supra’s smaller GR 86 or GR Corolla siblings – at least that’s what I thought going in.

You see, the GR Supra MT may be heavier than the GR 86 but its wheelbase is actually shorter. That, coupled with the wide track, sticky Michelin Pilot Super Sport rubber and a stability system tuned to counter snap oversteer make for a car whose big presence belies its agility. 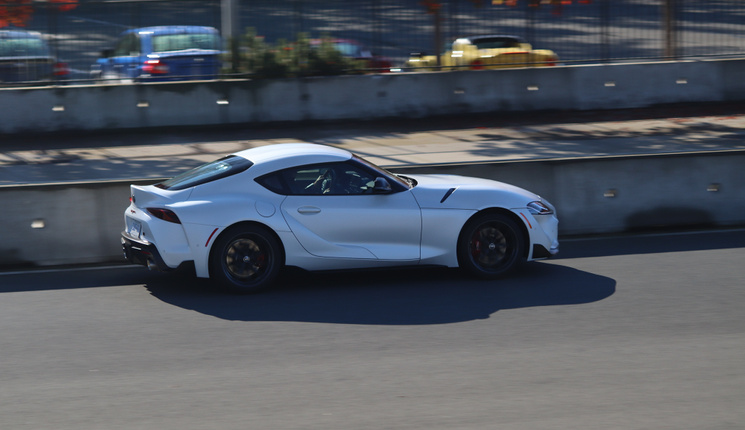 And it’s all nicely topped off by the manual transmission which provides short throws, very precise slots, auto rev-matching downshifts and a weighty clutch. It may be a bit too weighty for some, but I appreciate the muscular feel it offers. There’s still an eight-speed auto on offer, but I just can’t wrap my mind around that now that the manual is here.

That may put me in the minority, but not so much of the minority if, four years into a car’s lifecycle, the manufacturer decides to add a manual. I would imagine that there are many out there that are still pinching themselves that this has become a reality.