Though Silverstone isn’t without its share of high-speed straights, a Formula One car can pull as high as 6 g’s in its turns. To excel on this track, a car must work with the laws of physics instead of trying to overcome them with power. And thank god for that alliance because I’m white-knuckling it behind a factory driver, hitting those corners at speeds that have probably shifted my internal organs and dreading the moment that the tires finally surrender and we go pinwheeling off the track to land somewhere near Northhampton. 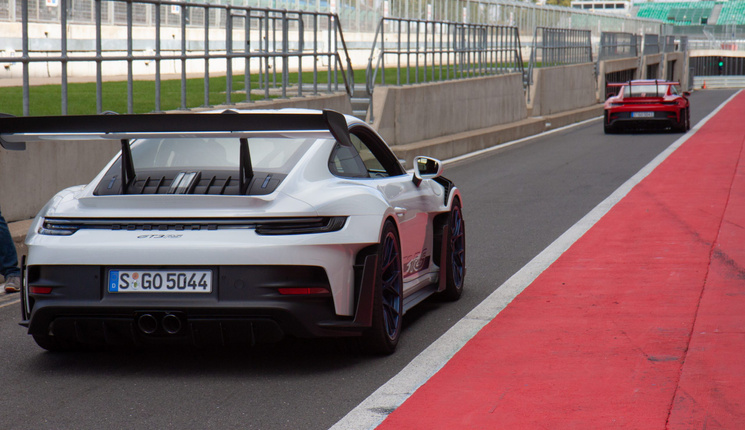 It doesn’t happen. The latest 911 GT3 RS was born for a track like this.

Rather than give the new GT3 RS tons of power, Porsche decided to push the boundaries of aerodynamics and grip beyond anything we’ve seen on a production car. Most races are won – or lost – in the corners. A car needs mechanical grip (tires) to stick to the pavement, and barring divine intervention, a means of generating force to push it down onto those four contact patches. The new GT3 RS has twice the downforce of the outgoing car and triple that of the current GT3. The harder you drive it, the harder the air mashes the car down onto those tires, giving it the ability to corner at insanely fast speeds without losing grip.

It looks like the fever dream of a Fast N’ Furious fanboy – all flared nostrils, gaping air ducts, and ridiculously enormous wing – but everything about the new GT3 RS is the result of countless hours in the wind tunnel and advanced physics. It’s enough to make an aerospace engineer salivate (full disclosure: I live with one, and yes, he did). 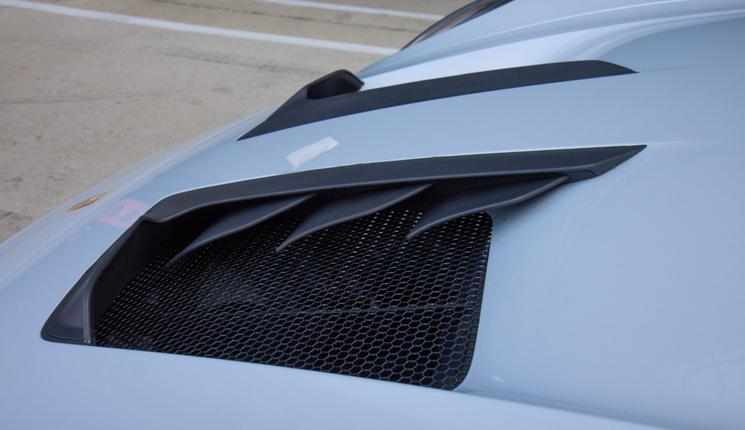 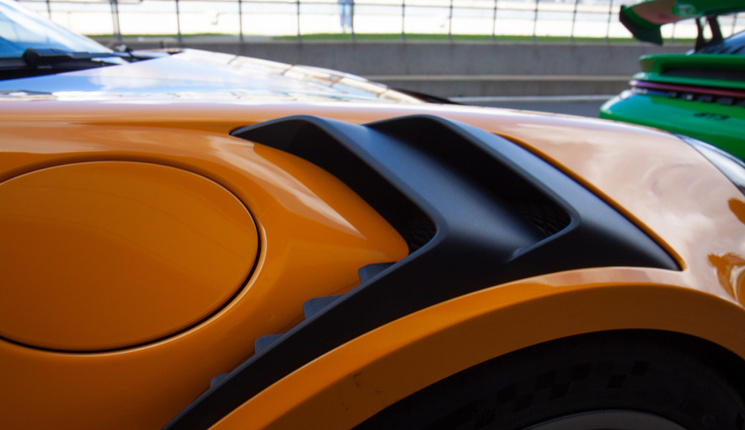 The giant nostrils on the hood draw in cooling air, while bladed inlets reduce pressure at the wheel arches and keep the brakes cool. A pair of roof fins deflect any air flowing up over the doors, redirecting it over the top of the car and into the rear air ducts, where it feeds the engine. The enormous swan-necked wing is 40% larger than the regular GT3’s, boasts 34 degrees of adjustment range, and for the first time in a road-legal production car, employs the “drag reduction system” (DRS) used in Formula One racing. On the straights, that much downforce isn’t needed and can actually slow the car down. Adjusting the wing to a “flat” setting allows the air to pass over it with very little drag.

While rear wings are nothing new, engineers have struggled to come up with a way to match that downforce at the front of the car. By eliminating the two side radiatiors under the hood, Porsche made room for a pair of hydraulically activated wings. Tucked away under the hood, they sit directly in the path of incoming air without creating the drag of a bumper mounted element. However, this also eliminates any “frunk” cargo space –- and given that it also has no rear seat, the GT3 RS won’t be your first choice for a Costco run. All told, the GT3 RS’s outlandish aero mods generate as much as 860 kg at 286 km/hr. 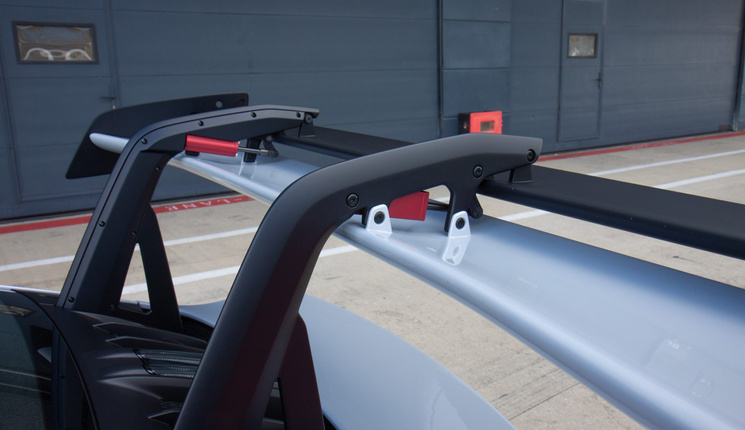 Complimenting the advanced aero technology are dampers and torque vectoring that are fully adjustable up to eight different settings. No more lying under the car in the pits between lapping sessions to adjust the dampers, the compression and rebound settings can be dialled up, or down using a knob on the steering wheel. You can also decide how much torque vectoring assist you need in the corners. Even the double-wishbone front suspension has been tweaked to improve airflow, with a spiralling, organic profile to its diameter.

Powered by the same 4.0-litre naturally-aspirated flat-six found in the GT3, the new RS receives a slight power boost to 518hp from 502. It also retains the six individual throttle bodies, one per cylinder. But the character of the engine has been altered by new camshaft profiles to give it more pull in the upper ranges – drive this car hard and it responds with “is that all you got?” As with all RS badged Porsches, the engine is mated to a seven-speed PDK because everything on this car is focused on getting maximum speed – and no human can possibly shift as quickly.

The gearbox’s shorter overall gear ratio helps the new GT3 RS to rocket from 0-60mph in only 3.0 seconds– 0.2 seconds faster than the regular GT3. Air intakes on the underbody cladding help cool the transmission so it can withstand extreme track use. 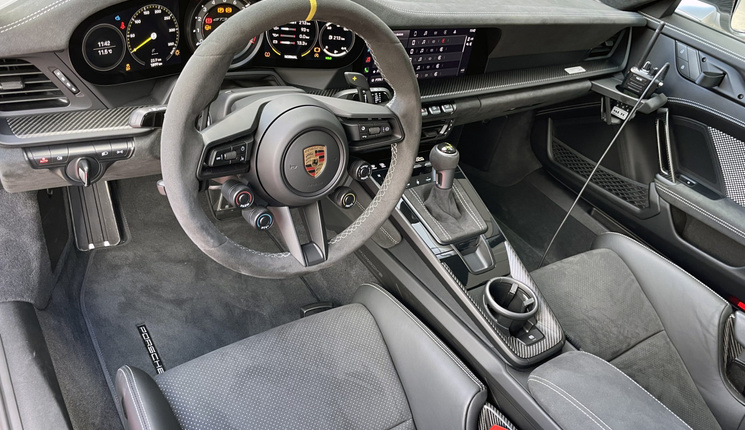 Honestly, the car’s cabin doesn’t make much of an impression when you’re buckled in and looking down the front straight of one of the world’s most famous Grand Prix tracks. The carbon-backed seats grip like a glove. The wheel is a telepathic conduit between you and the beast that’s enveloping you. My photos show a cockpit-like environment with a driver centric digital display and a simple centre console topped with an infotainment screen. I don’t remember them. The visceral experience of driving required a laser focus and everything outside its periphery was irrelevant. Apparently, my tester boasted $5400 worth of leather with GT silver stitching and an eye-watering $38,250 Weissach package. It features lightweight Magnesium wheels, and carbon fibre trim on the wing, hood, roof, and in other markets, a carbon fibre roll cage. While altogether the package cuts nearly 30 lbs of weight overall, the GT3 RS can’t be purchased with a roll cage in Canada.

The car fires up with a gruff bark that escalates to a banshee wail at speed. The PDK transmission rips through shifts like a Gatling gun, with corresponding growls and barks from the exhaust pipes. A factory driver in a GT3 sets a fast pace and I’m determined to stay with him, despite the corners approaching much faster than I’d like them too. There’s no way a car can keep its grip and stay flat while cornering this fast – and yet it does. This is an immensely capable car that encourages the driver to brake later and get back on the throttle sooner and harder. The level of grip is astonishing, with seemingly no rebound after braking. 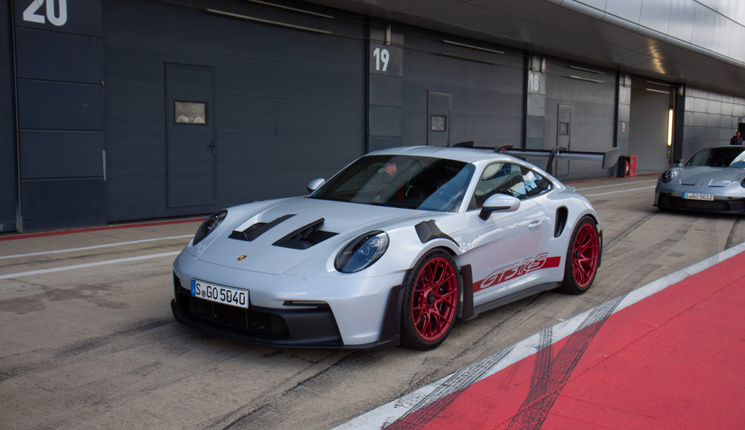 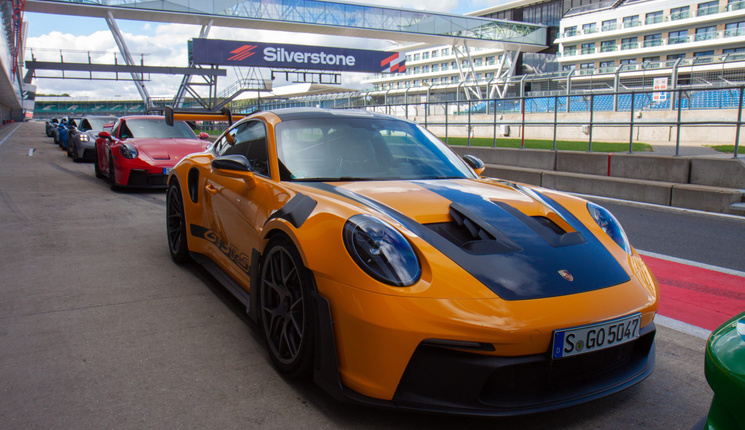 I’ve driven countless Porsches at speed on a variety of tracks, and they’re so beautifully balanced they can make an average driver feel like a star. The GT3 RS is another creature entirely. The ferocious intensity and crushing g-forces are quite frankly, a bit unnerving – even for someone who regularly tracks a Cayman S.

The Porsche 911 GT3 RS is an astoundingly brilliant car. But if the extent of your performance driving is a winding road with plenty of twisties, honestly, you’re much better off buying a Carrera GTS. However, if you’re an experienced performance driver whose every weekend is spent at the track –– the latest GT3 RS is going to blow your mind.

The writer attended this media drive as a guest of the automaker. Content and vehicle evaluations were not subject to approval