Why I love my vehicle: This Land Rover isn’t just spacious, it’s this family’s Best Friend

Jacqueline Nicosia has a car with capacity, and it comes through for her, her children and her businesses.

Join the Conversation (0)
Jacqueline Nicosia has a lot on her plate. The mother of two co-owns Toronto’s Ardo and Dova restaurants and Vivi Imports with her husband, Roberto Marotta.

With so much on the go, it might surprise you that Nicosia only bought her own vehicle less than a decade ago. Up until then, she and Marotta shared a two-door Saab. It was only after the birth of their first child in 2013 that the couple decided to get a second set of wheels.

They opted for a Jeep Cherokee, which was a top safety pick by the Insurance Institute for Highway Safety in 2012. When the Jeep’s lease ended last year, the couple decided to go with a 2021 Land Rover Defender 110 X P400, one of only 50 sold in Ontario. Nicosia tells us why she loves her vehicle.

“We were in a different financial position when we got the Jeep,” said Nicosia. “I did enjoy driving it, but I was ready to move on to a different style of car. The Jeep was a two-wheel drive, and I had a few moments driving in the winter with (my son) Leonardo in the car where my tires spun out a bit on the snow and ice. Getting a four-wheel drive car was at the top of my list. 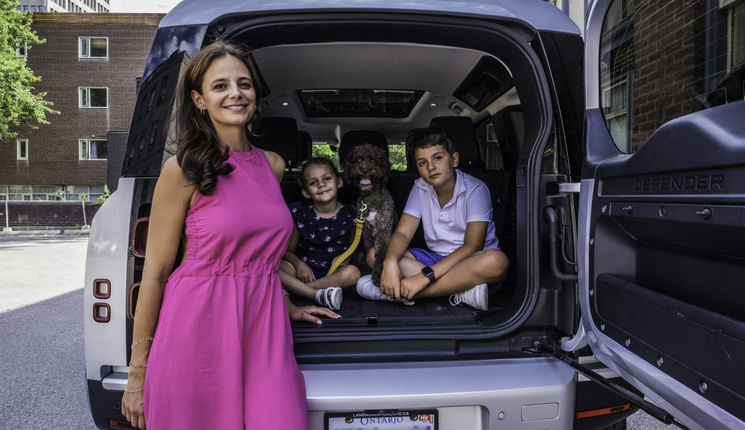 “I test drove about 15 different new and used SUVs. We went to the Land Rover dealership to look at another car and I saw the Defender. We figured we’d take it for a test drive and ended up buying the floor model.

“One of my favorite features about the car is the fact it's a very sturdy drive. It’s important especially with kids in the car. I wanted a car with a bit more power, and this delivered. I wanted something that that was easy to clean up. One really nice thing about the Defender is you can literally open the doors and almost hose the entire thing down. I’m the one who drives the kids from school to their activities, so you can imagine the mess left from boots in the wintertime.

“You also don’t see too many Defenders on the road compared to some of the cars I test drove that are all over the city. I wanted something that looked a little different. I liked that it has a bit of a rugged, bigger, boxier look but is still very elegant. I’m nervous to admit, but it’s true, I wanted something that I felt good to be in. 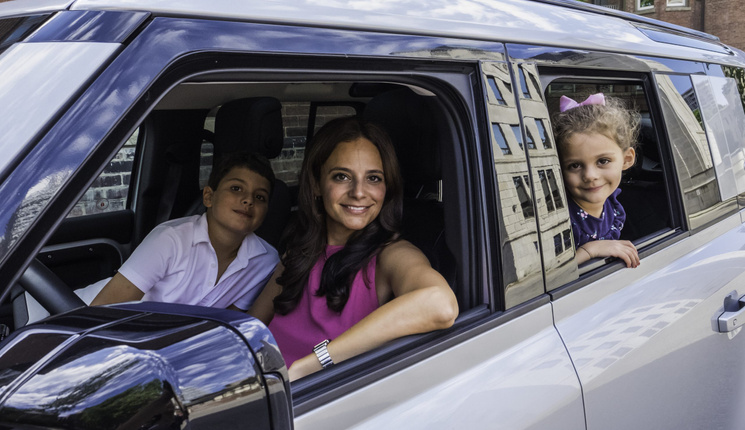 “I try to help my kids feel included and want them to care for the car as much as I do because its ours collectively. I don’t know why, but we gave nicknames to the cars. Rob’s car has always been Big Friend. My Jeep was Little Friend. The Defender’s nickname with the kids is Best Friend because it’s our car.”

“My favourite thing with having this car in the winter is I've never had a problem finding or getting out of a parking spot,” said Nicosia. “Even if there is a snow mound – especially in Toronto after they plow the street – I don't have a problem getting in or out of a parking spot. The capabilities of the Defender have been huge for me, and I didn’t realize the benefits of that until I had it. I have a feeling it will be very hard to drive a different car after this one.”

“My kids and I absolutely love that there’s a centre armrest cooler,” said Nicosia. “It’s probably not something I would have chosen if I had picked my own package, but it came with the car because it was a floor model, which already had all these different features in it. I didn't think I would use it but it’s a nice feature to have. It’s like a mini-fridge and I always have water and Bublys in there. When people get into my car and I ask, ‘Can I offer you a beverage?’”

“I love the size and capacity of the car,” said Nicosia. “It gives us a ton of space for moving stuff around between the restaurants, the importing business, and having two kids and a dog. I can open the back of the Defender when we’re stopped somewhere, and all three of us can sit back there and have a burger in the trunk.”

This article was edited for space and clarity. Email us at wheels@thestar.ca to be featured in Why I Love My Vehicle? Renée S. Suen is a Toronto-based lifestyle writer and photographer. Follow her on Twitter: @rssuen.