Why I Love My Vehicle: This 1976 VW Westafalia has provided decades of service

Wendy Blain has learned to go with the flow with her Volkswagen Westfalia camper van, lovingly called Gilda.

Join the Conversation (0)
Gilda — named after beloved comedic actress Gilda Radner — is famous in her own right. The vintage, lime green Volkswagen Westfalia is known across Toronto’s Danforth neighbourhood, with locals approaching her regularly with oohs and ahs.

And yet also, much like the late Radner’s famous sketch character Roseanne Roseannadanna on “Saturday Night Live,” the 1976 Westfalia is also prone to bouts of the absurd— lugging as much chaos as the cargo and camping equipment she was built to haul.

Wendy Blain, a retired high school principal and owner of the whimsical Westfalia, tells us why Gilda has played a starring role in her life less ordinary.

“I had wanted a Volkswagen camper for years and years,” said Blain. “My very first vehicle was a 1970 Volkswagen Karmann Ghia and my mom had driven a Volkswagen Beetle when I was a small kid.

“One day almost 30 years ago, I was driving along Eastern Avenue and there was a shop there called Salim’s. The owner had this little bus sitting there. I asked him if it was for sale, and he said, ‘Yes, for $3,000.’ I made the purchase immediately. I had to have it. 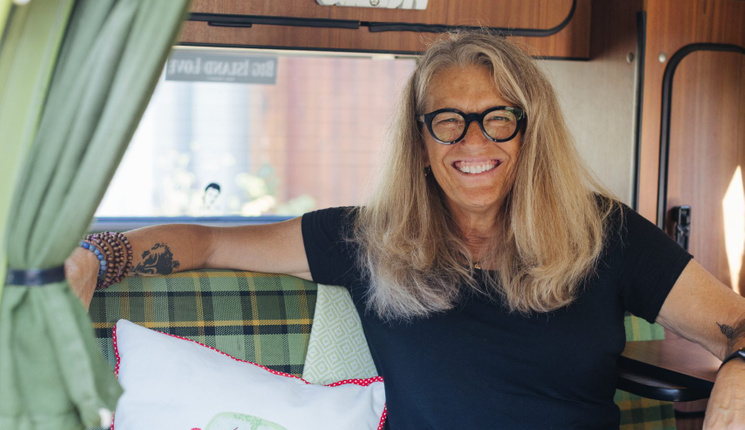 “Since that time, it’s become my cottage. I bring it out usually in May and put it to bed around Thanksgiving. Usually, the nose points east and I head to the Maritimes and enjoy the seaside with her, camping in the vehicle by myself or with friends.

“Often, I plunk it down in St. Margarets Bay in Nova Scotia where I have a dear friend. I also went to Newfoundland for a month with a friend of mine who’s a painter. We would just stop in random places and camp wherever we wanted. She would paint and I would go bike riding.

“On that same trip something went wrong with the engine, so I had to push to camper to start it the whole way. That was interesting getting off the ferry — where I had the ferryman push me off when I was heading over to Labrador.

“There was also the time, driving across the bridge in Lake Pontchartrain (in southeastern Louisiana), when the side-wind made it feel like my friend and I were going to blow off the bridge. We were white knuckling it the entire way.

“But that’s what makes Gilda unique. Gilda Radner’s character Roseanne Roseannadanna was all about, ‘If it’s not one thing, it’s another.’ When you’re traveling in a vehicle built in 1976, often stuff goes wrong, and you just have to let it go.

“People offer to buy her all the time from me, but I wouldn’t part with her for the world. The lessons she’s taught me and the memories I’ve been able to make with her — all that is priceless,” said Blain. 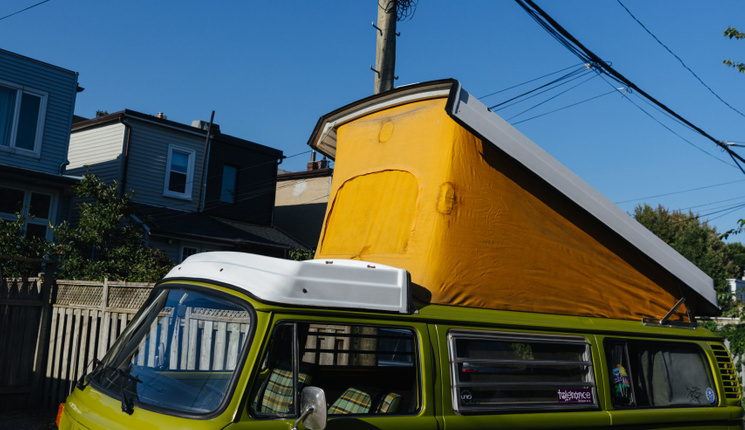 “I believe that the year this camper came out it was available in green, orange and beige,” said Blain while sitting in the vehicle. Its interior comes complete with the Westfalia’s traditional Birch plywood panels. “Green wouldn’t have been my first choice at the time, but it’s truly grown on me. It brings a smile to the faces of the people that I drive by and sparks conversations with lovely people wherever I travel.”

A place to sleep

A conversion of the Volkswagen Type 2 model, the Westfalia famously features a pop-up canvas tent on its roof that flips the vehicle into a convenient and spacious camper. “There’s a bed up there and in addition to that there’s a table on the main level that comes out so the backseat can fold into a bed. She can sleep two comfortably and four uncomfortably — a feat which she has accomplished on several occasions.”

Designed for those inspired to pick up and go, the 1976 Volkswagen Westfalia was built with all the comforts of home. Its standard features included a water storage and pump, an ice or cold box, a sink, Venetian blind windows and electrical hookups. “I can’t go anywhere without a good cup of coffee so the electric hookup is a must,” said Blain. “The cold box doesn’t work anymore so I use it as storage, and there are plenty of cubbies and closets for my clothing, dishes and odds and ends.”