Why I Love My Vehicle: 2005 Buick Park Avenue

This Buick fan never thought he would find, let alone buy, a rare version of the Park Avenue.

Join the Conversation (1)
Steve Roberts has many hobbies. In addition to gardening – Scarborough has recognized him for having one of the community’s best gardens – he builds roller skates and tinkers with his vehicles. The 85-year-old also enjoys visiting the region’s many flea markets, estate and yard sales searching for anything automotive related.

Roberts has always bought his vehicles second hand and has a soft spot for orphaned vehicles. He has owned a series of GM models over the years, including a 1954, 1959 and 1965 Chevrolet, and four Buick Park Avenues. To say he is a fan of full-sized luxury cars is an understatement. He currently drives a 2005 Buick Park Avenue Ultra Special Edition.

He bought the car to replace his 1997 Buick Park Avenue Ultra Supercharged, which he was spending more time fixing than driving. The Special Edition was sold by its original owner and, while it had its fair share of issues, Roberts knew he could fix it. He tells us why he loves his vehicle.

“I could never afford a brand-new car,” Roberts said. “I usually picked up a car that needed a lot of repairs. I’m a mechanic, but I never got my license because I went into printing instead, but there's nothing on a car that I can’t fix or repair. I’ve built motors, transmissions, differentials and the electronics. That’s why I like to stick with one brand.

“The 2005 was the last Park Avenue Buick made (it was discontinued in the U.S.). This one is the Park Avenue Special Edition Ultra, which means it was a limited production model. They only made 300 of them. It has special trim, badging, split bench seats and was only available in one colour combination. It had 17-inch rims instead of the 16-inch on the base model.

“My car has everything that was available except for the floor console – supposedly it was another $3,000 just for that. Last year I found a car that had a floor console (I could take it from),” he said.

“I’ve modified a couple of things. The 1997 had a nicer grill. I had two spare ones for the 1997, so I painted one of them black and put it on the 2005, which makes it look better than with its chrome plated grill. I saved the original grill in case I want to put it back on. 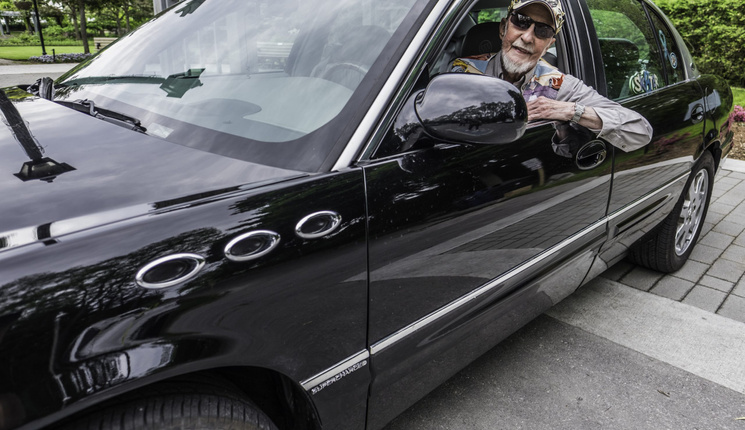 “I’ve been collecting paperwork for the Buick,” said Roberts. “I have the 1997 press package, which comes with all the different brochures that showed the different models, color combinations, interior, etc., and a set of eight-by-ten black and white promo photos of the Park Avenue. I've been shopping around trying to find the same press package for the 2005, but I’m not anticipating that I will find it.

“This is probably the last car I’m going to own,” said Roberts. “I just got lucky. I wasn't even expecting I’d ever find one because it’s a really rare model.”

“I’ve always liked Buicks,” said Roberts. “For a while, I liked European cars, but they were too expensive to fix. A lot of times you couldn’t get parts for them. I went through all sorts of different British vehicles. I only ever had one Chrysler product, and my first Ford had an overhead valve engine that was a lemon, so I never went back to Fords. I only seem to like GMs.” 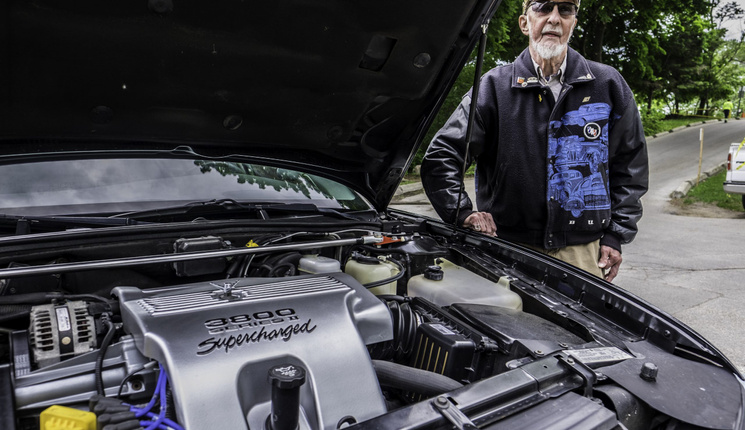 “The 1985 Buick Park Avenue was my first front-wheel-drive car,” said Roberts. “Then I owned a 1993 Park Avenue that was supercharged, and then a supercharged 1997 Park Avenue. The ’97 was the first in its series, and the 2005, which I have now, was the last of that series. Being in the same series, they used the same body, so they both look alike. But they upgraded the horsepower and more toys over the years.”

“It’s got four-wheel independent suspension,” said Roberts. “It’s also got overdrive transmission. It's quiet. It's powerful. You know, with the supercharger, it goes like a bat out of you-know-what. And it’s relatively cheap on gas. I’ve got to watch it because a couple of times I’ve had it over the speed limit. I pulled out to pass a truck, and just put my foot onto the gas hard, and it shot up to 150 kilometres like nothing.”