The car was used to bring their first two children home from the hospital after they were born.

Join the Conversation (0)
Noreen Ragbar’s 1977 Datsun 710 is filled with memories. Recently married to her husband, Ron, in the late-1970s, Noreen needed a car to get her job as a parttime nurse at the Guelph General Hospital.

Spotting an ad in the local newspaper, the Guelph Mercury, offering a Datsun lease for $99 down and $99 per month, the couple decided to purchase one with a burnt umber exterior and a white vinyl top. 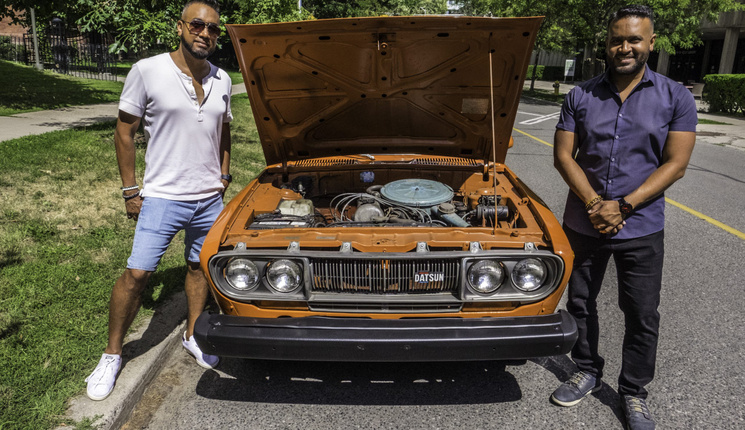 The car has been with them ever since, following the couple as they moved from Guelph to Toronto and then Mississauga, and was used to bring their first two children, sons Rygel and Zap, home from the hospital after they were born.

It took the family – including their youngest child, daughter Deneb – on vacations in Northern Ontario and the United States, as well as piano and skating lessons closer to home.

By the 1990s, the Datsun was showing its age. One time the bumper fell off as Noreen was taking the kids to a cricket camp. “I just came out, picked it up, put it in the trunk, and we continued on,” she said. Soon the Datsun was stored away in the family garage and replaced with a newer vehicle.

Thanks to the hard work of her sons and husband, after years of sitting unused, the car was restored for Noreen. The Ragbars tell us why they love their vehicle.

“In 2017, the boys decided with Ron to restore it, but they kept it a secret from me,” said Noreen. “It was badly in need of some bodywork.”

“As far as mom was concerned, it was being towed away and scrapped,” said son Rygel. “She didn’t know we towed it to the auto shop. It took us about six months to restore the vehicle. All the parts that were rusting were replaced. We had to do an oil change, but the motor was still good. All I had to source was a starter for the car which I got from South Africa.

“Our intent was to restore it and keep it for sentimental value,” he said. “It’s the original headlights, white vinyl roof and interior. We reupholstered the seats with something like the original. The radio and all the light still work. The car was originally purchased in orange but a couple years after that my father painted it a light green. So, part of the restoration was bringing it back to the original colour.” 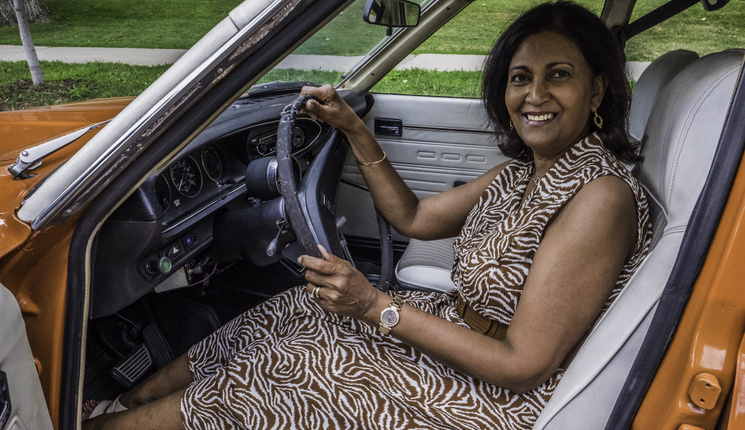 “My eldest son likes to say, ‘Things last when you take care of them,’” said Noreen. “I like to think my car has come full circle. The boys who came home in it as newborns are now driving it proudly and loving all the attention it attracts. This year, the Datsun was accepted to be on display at the Yorkville Exotic Car Show, and some people shared some very emotional memories of their own Datsuns. So, that's the fun part about driving it.”

“It’s a special car. It was our first vehicle, and I did so much with the kids in it,” said Noreen. “Bringing them home from the hospital is a very special memory. They didn’t drive the car as teenagers – by then we had other cars – but they’re driving it now as adults. That’s remarkable to me. It was laid up in the garage for more than 20 years and now it’s up and running on the road.”

“A lot of people have Datsuns that were performance or sport vehicles,” said Rygel. “But this is a regular family vehicle. It's rare for someone to keep and restore something like this. A lot of people who know this car and appreciate it are shocked when they see it. We never thought it would get so much attention. My brother and I have nice cars, but this car gets the most attention and the most love from people – young and old.”

“The beauty of the car is that all the parts are original: the L20B engine, chassis, three-speed fully automatic transmission, exhaust, cooling system, suspension, drum brakes and HVAC,” said Noreen. “It doesn’t have AC. It has one rear view mirror on the driver’s side – that’s how they were made in 1977 – and a set of 165 R13 whitewall tires. Even the Ontario plates are original.”

This article was edited for space and clarity. Email us at wheels@thestar.ca to be featured in Why I Love My Vehicle? Renée S. Suen is a Toronto-based lifestyle writer and photographer. Follow her on Twitter: @rssuen.