Join the Conversation (0)
In our series of examining road cars and their professional-grade racing counterparts, we’ve taken Audi’s latest hot sedan, the RS 3, to Canadian Tire Motorsport Park, for a rendezvous with its racing foil, the RS 3 LMS TCR.

The two cars are pretty easy to distinguish from one another. The RS 3 has that familiar look of its A3 and S3 siblings, while the racecar, with its massive fenders, is clearly taken straight out of a modern touring car racing mold.

The first thing you need to know about this Audi RS 3 road car is that it’s an Audi and even though the RS badge promises blistering acceleration and a carnival’s worth of excitement, this little sedan looks like it’s ready to lean back, kick its feet up, and sip a martini. Yes, it’s pretty chill, and you need to be in the know to recognize one. 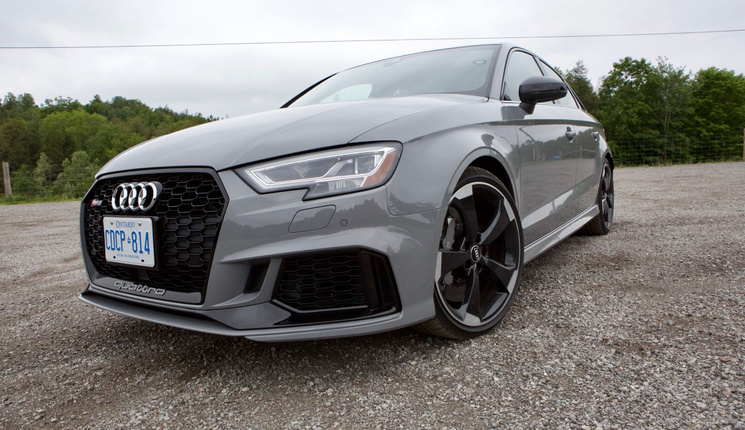 In the real world, though, this RS 3 is quick, surefooted, and inspires confidence. Need some thrust? No worries, just jump into the throttle and it’s less than a heartbeat away. It’s got grip, precise steering, and braking power to match. It’s a very tidy, very competent, and yet, a very compact package.

Visually, it’s entirely low key, similar to the way the legendary 911 Turbo looks like a basic 911 at first glance. Just like that Turbo, this RS 3 looks restrained, but yet has that same breed of ferocity lurking under its skin. It is indeed the 911 Turbo of compacts.

Unlike the other models it’s based upon, the RS 3 is powered by one of the coolest motors available today – a 2.5-litre, turbocharged five-cylinder, that produces 400 horsepower and 354 pounds of torque. It’s the torque curve that tells the story – and is the reason this RS 3 is so quick in the real world because it makes peak torque just off idle at 1,700 all the way to 5,850 RPM. Plus, it makes peak power at a thrilling 7,000 RPM, so this motor has you covered.

It sounds brilliant, too. Unlike anything else that’s similar in displacement. It’s so unique and more than loud enough, which is all pretty tough to do with a modern, turbocharged motor. This five cylinder delivers on its promises and Audi deserves kudos for continuing to build something so distinctive.

Power goes through a seven-speed DSG dual clutch transmission and Audi has nearly perfected this gearbox. In automatic mode, shifts are smooth and nearly imperceptible, and when you’ve decided to shift for yourself, the paddles do exactly as their told. There’s Audi’s Quattro all-wheel drive system, but I didn’t test it beyond maximum acceleration on dry asphalt and there’s no shortage of real-world traction. No, I didn’t bother with launch control because that’s juvenile unless you’re on a race track. Even so, it’ll do zero to sixty in four seconds flat, according to Audi, but it might actually be a tick or two quicker.

This RS 3 test car has the right specification, which includes the conventional non-adaptive dampers and the suspension does a fantastic job of delivering reasonable ride quality. It’s really not very punishing, as the RS badge would otherwise suggest, with excellent grip and the chassis’ got a beautiful, lively balance.

You’ll want to spec your RS 3 this way, too, which includes the wider front tire option – 255s versus the standard 235s – and yes, the standard tire remains in place at the rear. The kids call this reverse stagger, I think. As someone who was very successful racing on a similar setup, the wider front doesn’t necessarily change the inherent balance of the RS 3, but rather the wider tire does a better job managing heat than the narrower tire. That’s the kind of thinking that’ll make a track day in your RS 3 much more enjoyable.

Audi would love for me to talk about their virtual cockpit because it’s one of their latest bits of driver-oriented tech, but after using it for a few days, I’m obliged to talk about it. The screen is perfectly legible, but it’s the customization, especially the map view in the instrument cluster, that makes it effective. You get all of the important information – and more – and toggling between your choice of display is easy.

Interior design and finishes are typical Audi, which is to say, superb - clean lines, great ergonomics, and premium materials. Seats are supportive, the driver’s seat sits properly low on the floor, and they’re comfortable over long distances. Visibility’s great, too. 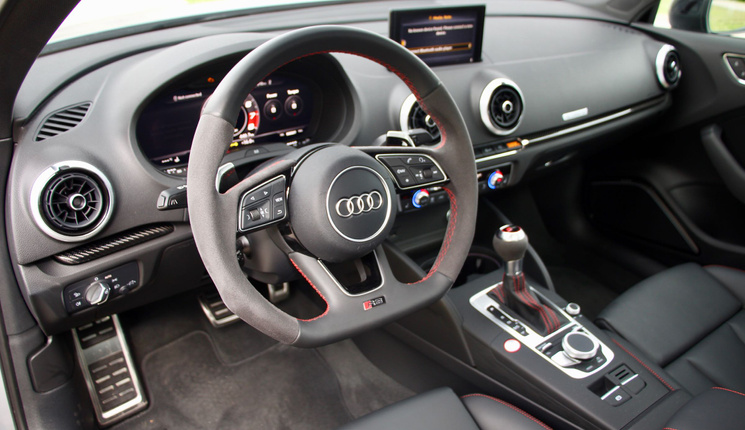 As much as the front row is relatively spacious, the rear seats are a bit cramped. Adults fit, but they’re not perfectly happy, or at least that’s what they told me. I’d rather have the versatility of the RS 3 Sportback that they sell in other markets, but we don’t buy hatchbacks in North America, so the hatch remains forbidden fruit for us.

Much like the BMW M4 road car I drove in another road car vs. racecar story, while the carbon ceramic brakes are powerful with great feel and modulation, the brake pedal is overboosted in this RS 3. Push that pedal just slightly and the pads bite into the rotors like a pit bull. You definitely will learn to have a light touch with your foot, but I’d like to see that brake pedal pressure match the other driver control weights.

For clarity, the carbon ceramic brake option is for the front rotors only, the rear discs remain steel, but the fronts are doing well over 90% of the braking, so you can forgive Audi for not going full carbon ceramic. Still, that overboosted pedal, just like the M4, is a minor complaint about this RS 3, which is outstanding in nearly every other way.

Compass Racing, one of the most successful and long-running teams competing in the IMSA Continental Sports Car Challenge graciously invited me to spend some time with one of their Audi RS 3 LMS race cars and I’m actually nervous with excitement thinking about getting behind the wheel of this racecar.

You see, I’ve been successful with front wheel drive racecars in the past and this Audi racecar is actually front wheel drive, which is the standard for the global TCR category. What’s exciting to me is that I’m going to find out what the best of modern front wheel drive race cars are all about but, first, I need to get some insight from Karl Thomson, Compass Racing’s founder and team principal.

As Thomson tells me, along with the Quattro all-wheel drive system, gone is the five-cylinder engine. It’s been replaced by a two-litre turbocharged four-cylinder. Front drive, two litre turbos are the global standard for TCR racecars, just like the Honda Type Rs, Hyundai i30Ns, the GTIs, and others.

Audi rates the turbo four at 330 horsepower and 302 pounds of torque, with peak torque at 2500 RPM. This RS 3 LMS uses a six-speed DSG dual clutch gearbox, which is essentially a production piece, although you can get a version of this car with a racing sequential gearbox.

On the outside, the racer’s bodywork is massively wider than the roadgoing RS 3 and that makes it exciting even as it sits still. This is proper touring car stuff. The Compass Racing team tells me the fenders are (relatively) inexpensive, replaceable parts, simply because they take the brunt of wheel-to-wheel action. The front splitter looks like it’ll slice your foot off at the ankle and the adjustable rear wing is all business. Unlike the road car’s pair of shiny exhaust tips, the LMS has a single pipe out the back. 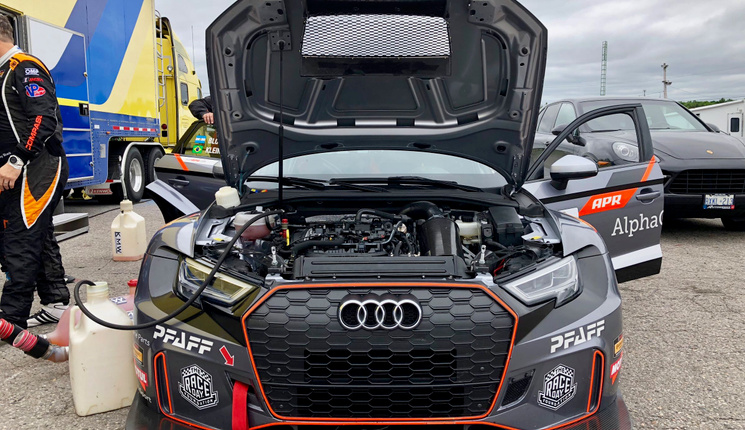 As I roll out onto the track, I immediately notice the RS 3 LMS delivers power nearly as smooth as the road car. It’s remarkably quick and it doesn’t take long to feel comfortable. I know it’s much wider than the road car I’ve been driving, but the racecar doesn’t feel all that much wider. After a couple of laps, I know exactly where the corners are and I start pushing in my usual pragmatic way – braking less for each corner and carrying more speed on corner entry.

Brake pedal effort is certainly higher than the road car, but it’s not quite as crazy as the BMW M4 GT4 I drove recently. Feel and modulation are just awesome and if there’s anything I fetishize in a racecar, it’s the brake pedal. This one is a winner and I can feel exactly what’s happening through the pedal. Love it.

As I discover, the Audi will actually shift itself at race pace, holding revs, upshifting at precisely the right time and downshifting appropriately, no paddles required. I try it for a couple of laps, and it works perfectly for me, particularly since I’m still familiarizing myself with this car.

With more time in the car and Canadian Tire Motorsport Park being my home circuit, I know my lap times are very, very quick. But I’m not looking. Instead, I’m soaking up the experience, enjoying the speed, the stable handling, the superb brakes, and the confidence the RS 3 LMS gives me.

Lap after lap, it’s encouraging me to go faster, and even though it’s Compass Racing’s car, I begin to explore its limits in a few of the fast corners and this is a car you can play with. What’s interesting is that it doesn’t seem to have any sharp edges and doesn’t want to bite the driver no matter what I throw at it.

Today, I’ve had a revelation. Audi makes the best front wheel drive car I’ve ever driven. It also happens to be a brilliant racecar and looks like a touring car should. Before I get out of the car, I know that I need to race one of these. It is that good.

I’ve heard some people say that the RS 3 road car isn’t hardcore enough. To be fair, it’s reasonably civilized, despite being very quick in the real world. Just like the 911 Turbo is a civilized GT with a massive performance envelope, the RS3 sedan is a compact-sized and civilized giant killer on the road. 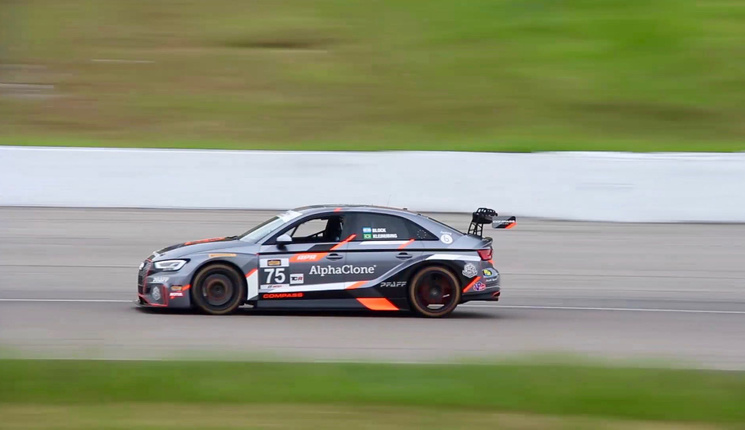 I suppose if you want a hardcore Audi compact sedan, the answer is this: get a RS 3 LMS and go racing. You can’t get any more hardcore than that. The price of admission is a bit more than a RS 3, though. Roughly double, in fact. This Nardo Grey test car with nearly every option prices out just shy of $77,000, while Audi Sport Customer Racing will sell you an RS 3 LMS for $135,000 US, which is very reasonable for a complete professional level racecar. Plus, it’s one of the coolest homologated racecars you can buy today.

Many thanks to the Compass Racing team for entrusting me with their Audi RS 3 LMS for some quality laps around Mosport. It’s a thrill to drive and I’d love to race one. And it had better be soon.