Review: The New Nissan Z Doesn’t Live Up To The Hype

Compared to the Supra, the new Z is a soft grand tourer and not a focused sports car.

Join the Conversation (0)
This shouldn’t come as a surprise.

If you were curious enough to read the fine print — or if you were zen enough to not be seduced by the legion of hivemind, groupthink clickbait articles — then you were probably able to predict, as early as its announcement, that the new Z would be nothing more than a warmed over stew of leftovers.

As a result of the Z’s parts bin approach, I felt pretty confident from the start that the new Nissan Z wouldn’t be as fast or fun to drive as the Toyota GR Supra. And I’m very disappointed that I was right.

Honest. I wanted the new Nissan Z to be a great car as much as anyone else simply because I want more thrilling, engaging, fun-to-drive sports cars on the market.

Reading the specs on paper, you would be forgiven for thinking the new Z isn’t just that. Its twin-turbo 3.0-litre V6 makes 400 horsepower. It’s available with a 9-speed automatic or a proper 6-speed manual transmission. It’s rear-wheel-drive only. It only has two seats. It takes just over 4 seconds to snap to 100 km/h and it will zip through the quarter mile in the low 12-second range.

Besides being marginally, albeit notably, slower than the GR Supra 3.0, that all sounds like a recipe for a great, fun sports car. 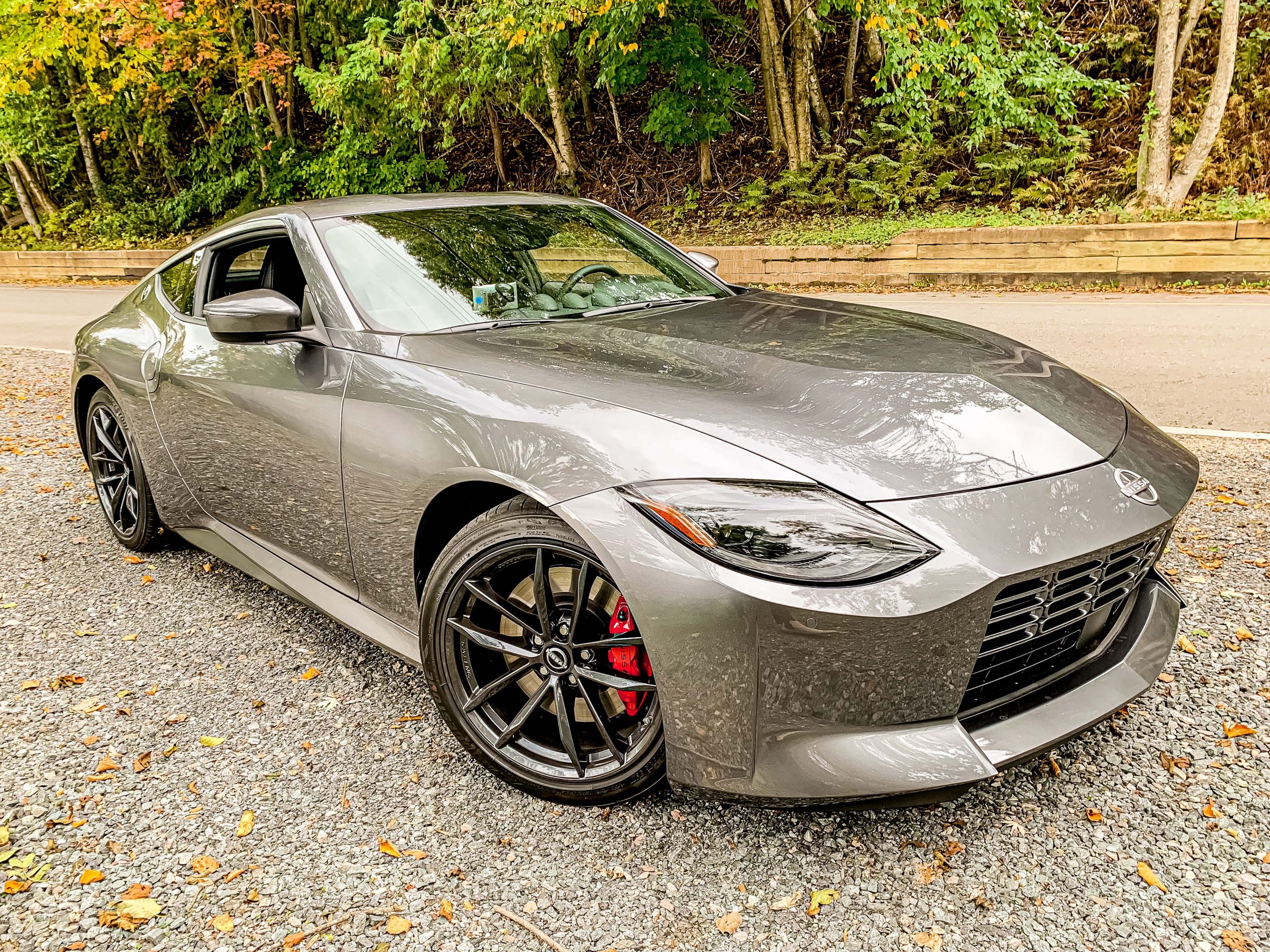 And there’s more to like. The exterior harkens back to classic Zs of old — from the original 240Z’s silhouette and halo front headlights, to 300ZX-inspired tail lights. The interior even takes cues and actual materials from the GT-R — namely the striking and very well contoured tri-spoke steering wheel, paddle shifters, and suede inserts for the seats.

Speaking of the seats; they’re very comfortable and well-bolstered. Nissan re-designed the seating position specifically to accommodate taller drivers. I’m about 6’3” and I have to admit that getting in and out of the Nissan Z, compared to the GR Supra, is a much easier and more dignified experience. The Z is also much more comfortable over long drives than the Supra. 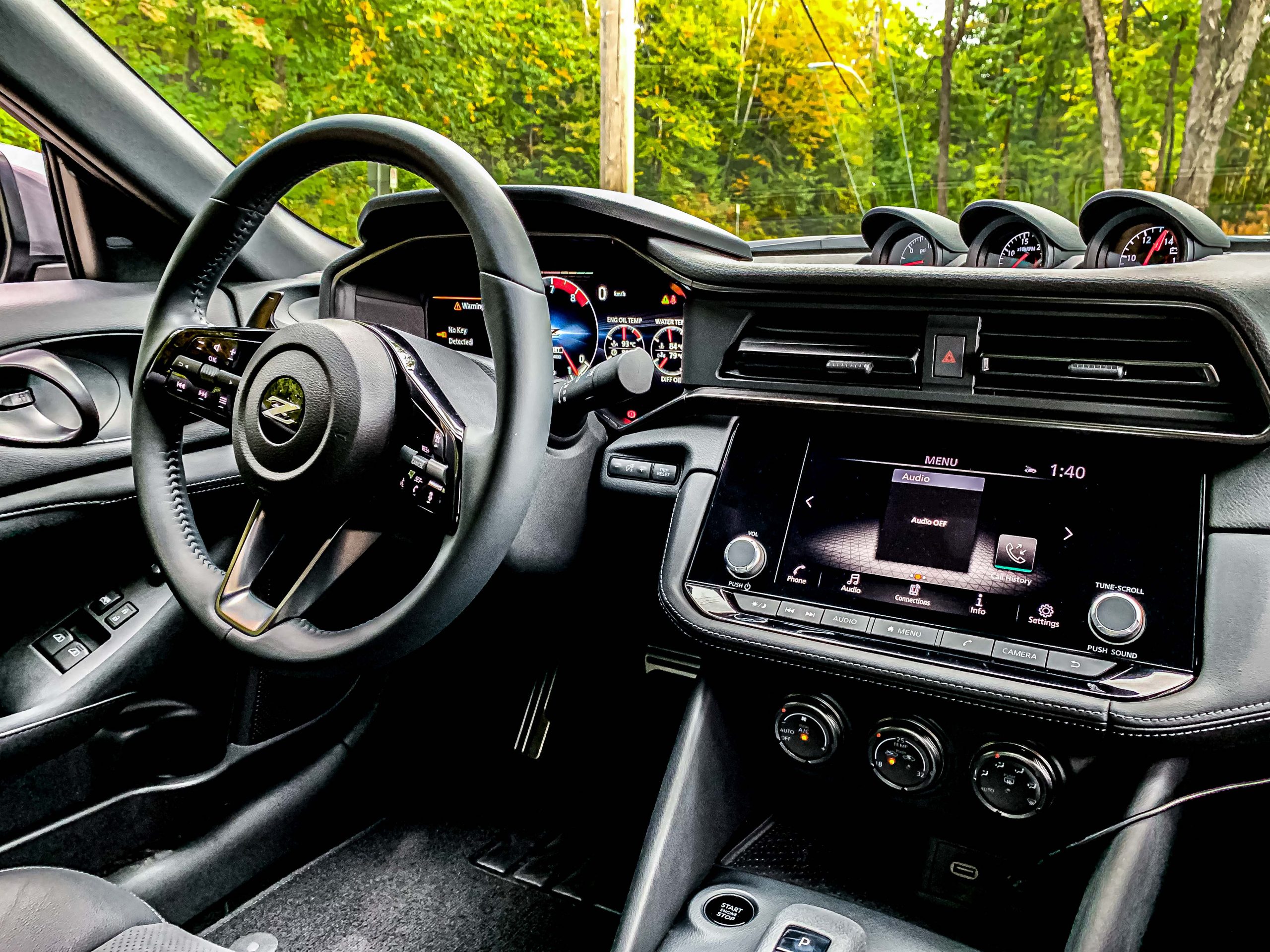 Forward and rear visibility are simply excellent in the Z — I’d go so far as to say “best in class”. And despite its massive b-pillars, blind spots are fairly minimal. Oh, and when you roll the windows down at speed, there’s no god-awful wind buffeting pounding into the back of your skull like a death metal kick drum.

Even on a greasy, wet track (I had the opportunity to test the new Z on Circuit Mont-Tremblant after some heavy rain) the Potenzas kept the Z fairly planted, controllable and undramatic. In the real world, the Potenzas were much quieter and softer than any Pilot Sport tires I’d ever driven.

As just a car to live with every day — or perhaps something to take on a long road trip, I would choose the Z. Hands down. However, in every other regard, I would take the GR Supra.

Not just because the GR Supra is the factually better performer, but because it’s a lot more fun and thrilling to drive in the real world, too. 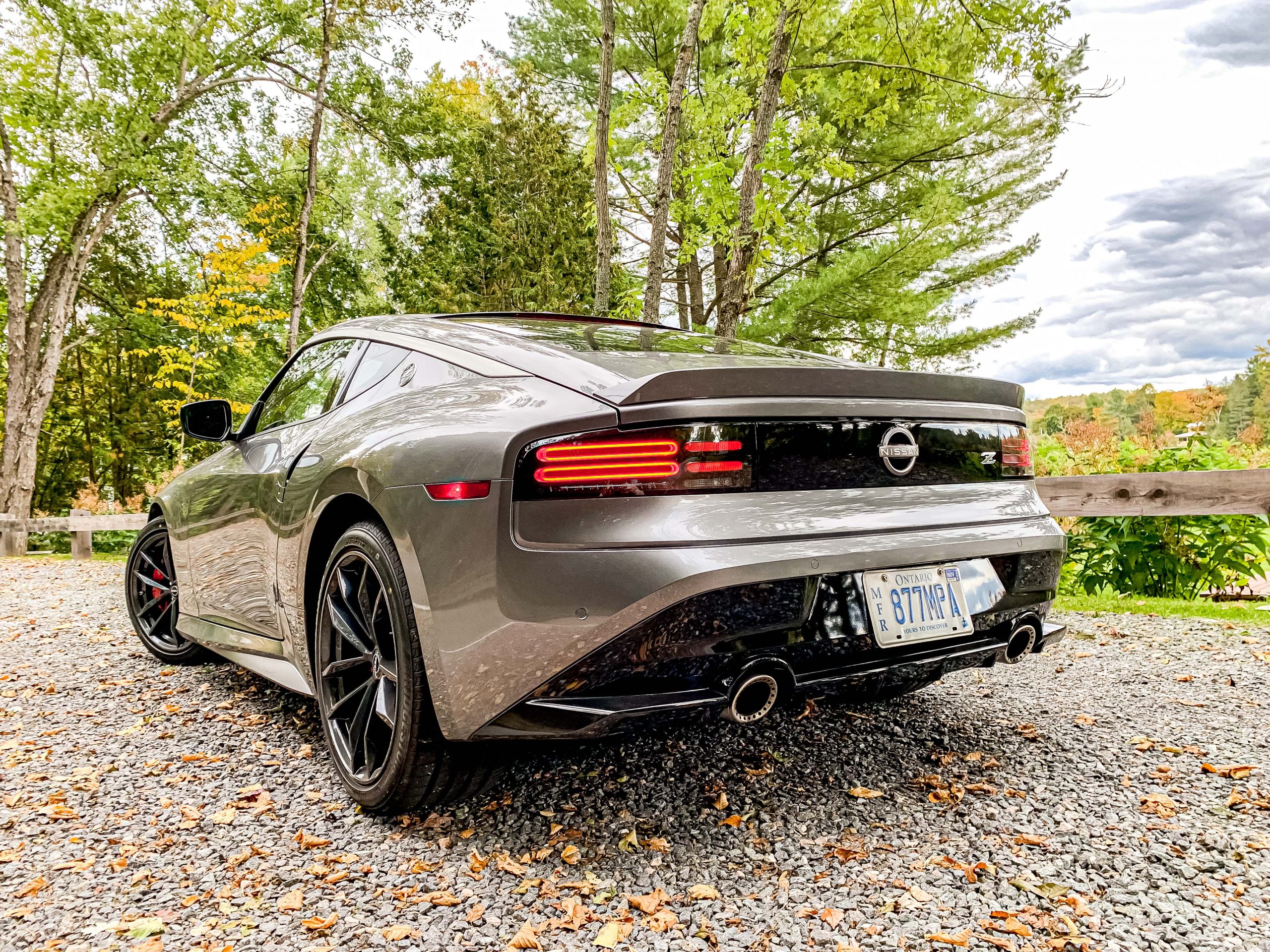 The Z’s biggest issue as a driver’s car is that everything is soft. The suspension has a lot of travel and the chassis feels underdamped. While it may feel planted with its healthy amount of grip, getting the car to rotate under cornering can be a challenge, and that might be okay if you could have fun and hang the ass-end out around corners… but that’s easier said than done. Overall, the Z is too buttoned up to be fun on the street, and too soft to be serious on the track.

Then there’s the power. Yes, 400 horsepower sounds like a lot in a car this small… but it sure doesn’t feel like a lot. From a dig or from a roll, the Z just fails to give you that feeling of slight terror you can get from so many other members of the “400 horsepower club”. The Z’s advertised 400 horsepower feels much closer to 300 horsepower and that might be okay if there was some drama or personality to the whole affair… but there isn’t. 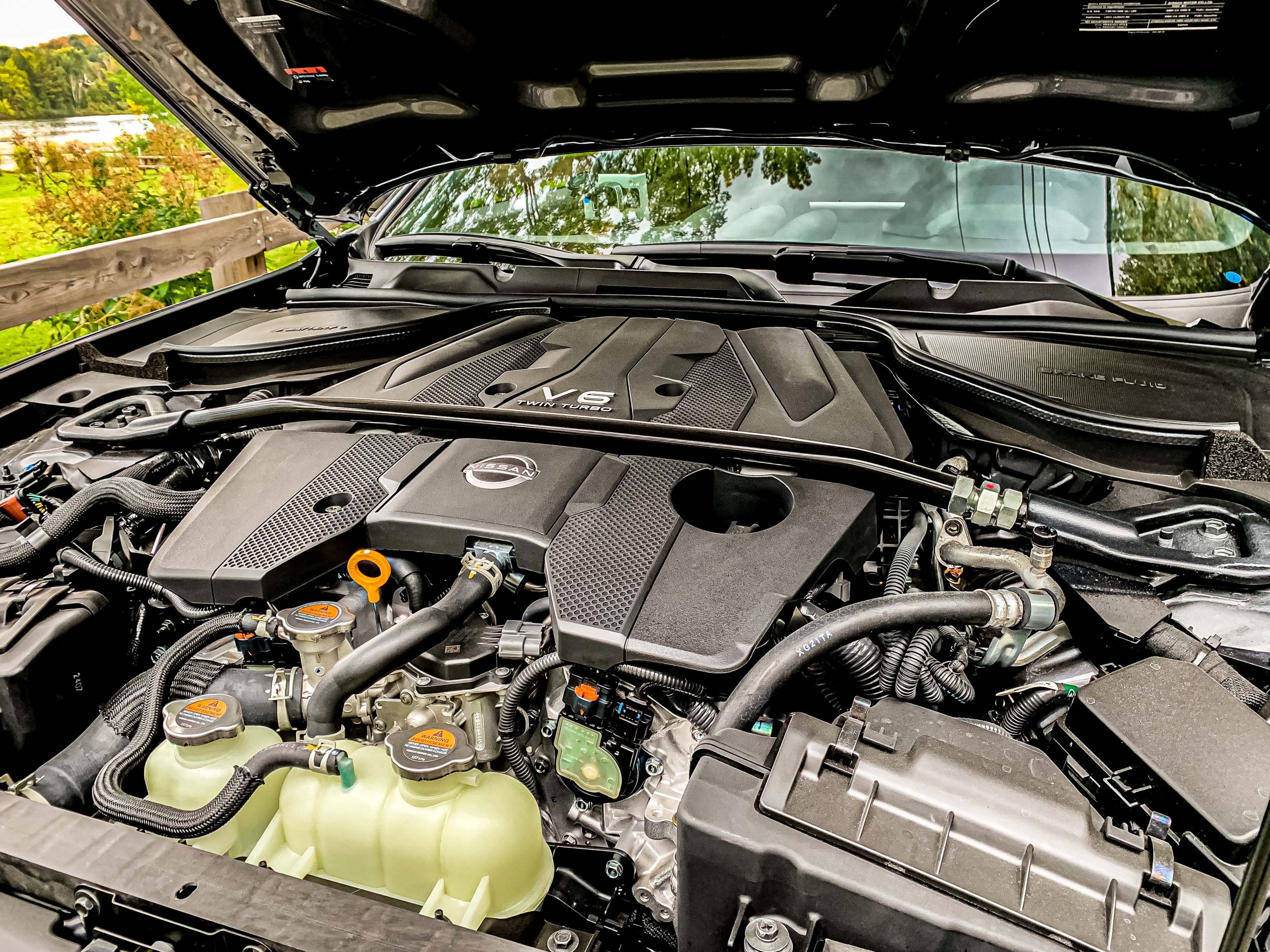 The Z’s 3.0-liter twin-turbo V6 doesn’t have a particularly memorable engine note. It doesn’t distribute power in any particular fun way. It’s just a very long, sensibly mapped powerband which goes about the business of bringing the vehicle up to speed.

Sorry, but give me the “snap-crackle-pop”, “hold onto your butts” angry terrier that is the B58 inline-six any day. It is infinitely more exciting and memorable to drive than Nissan’s turbo V6.

Ah, but what about the manual transmissionl? Surely that’s enough to liven up the experience, right?

The six-speed manual unit itself is really quite nice to use. The clutch is very light with a high, proper sports car bite point. The shifter feels great in your hand and rowing through the gears very much gives you that “rifle bolt” feeling that you so often hear about.

However, the whole experience is completely let down by the Z’s clumsy and spongy drive-by-wire throttle. Combined with the engine’s numb powerband, nailing crisp shifts takes some getting used to. In fact, for any kind of real driving, I found I had to keep the Z in “S-Drive” mode to give the throttle enough weight to create precision in my shifts.

Moreover, because the powerband is so elastic and because the gears are so tall, you can essentially just leave the Z in third gear while on the track or on the back roads. Because you don’t need to shift, you don’t get to shift. As a result, you’d have much more fun in an MX-5 or GR 86.

Maybe this squishy throttle and under-engaged manual experience is fine for retirees. But if you’re someone who likes spirited driving? It’s just not stimulating enough. And crucially, it’s just not as good as the GR Supra. 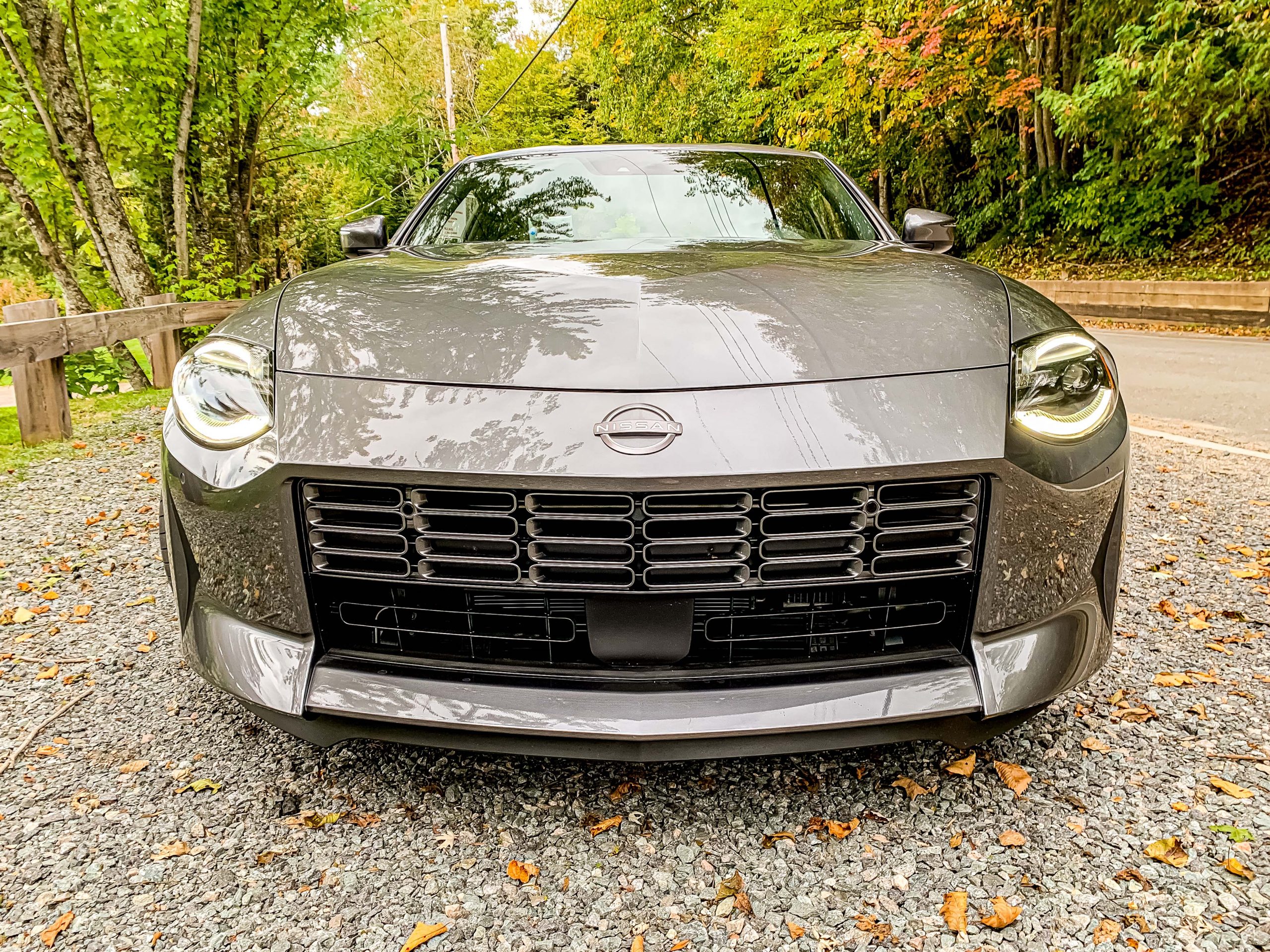 For the record, I don’t keep bringing up the GR Supra because I think it’s a good comparison to the Z. On the contrary, I think the GR Supra is in a totally different league than the Z. The GR Supra is a hardcore, enthusiasts sports car. Where the Z is a soft, spongy, grand tourer. The GR Supra feels youthful, playful, excited, and wants to overachieve, constantly. The Z just sort of feels like it's for old people.

But actually, I think the fairest (and I wasn’t the only journalist to draw this conclusion coming out of the Nissan Z press event) cross-shop for the Nissan Z is the Ford Mustang. While a Mustang GT would still blow the Nissan Z out of the water in terms of performance, the everyday usability and accessibility of the performance, for the average joe, are quite similar. And then it just comes down to a preference of personality and attitude.

Of course, if what you really want is a cheap, 400+ horsepower driver’s car at the best possible price, then the Camaro SS (or better yet, the often overlooked LT1) is the real way to go.

However, Nissan insists that Camaro and Mustang simply aren’t on their radar. Instead, the Z’s mission, according to Nissan, is to present itself as a bargain over the GR Supra or even the Porsche 718.

And true enough, the Z is much cheaper than both of those options — certainly at a starting price of around $46,500, you should theoretically be able to get into a Z for at least $10,000 less than a GR Supra (we’ll see what dealer markup has to say about that). 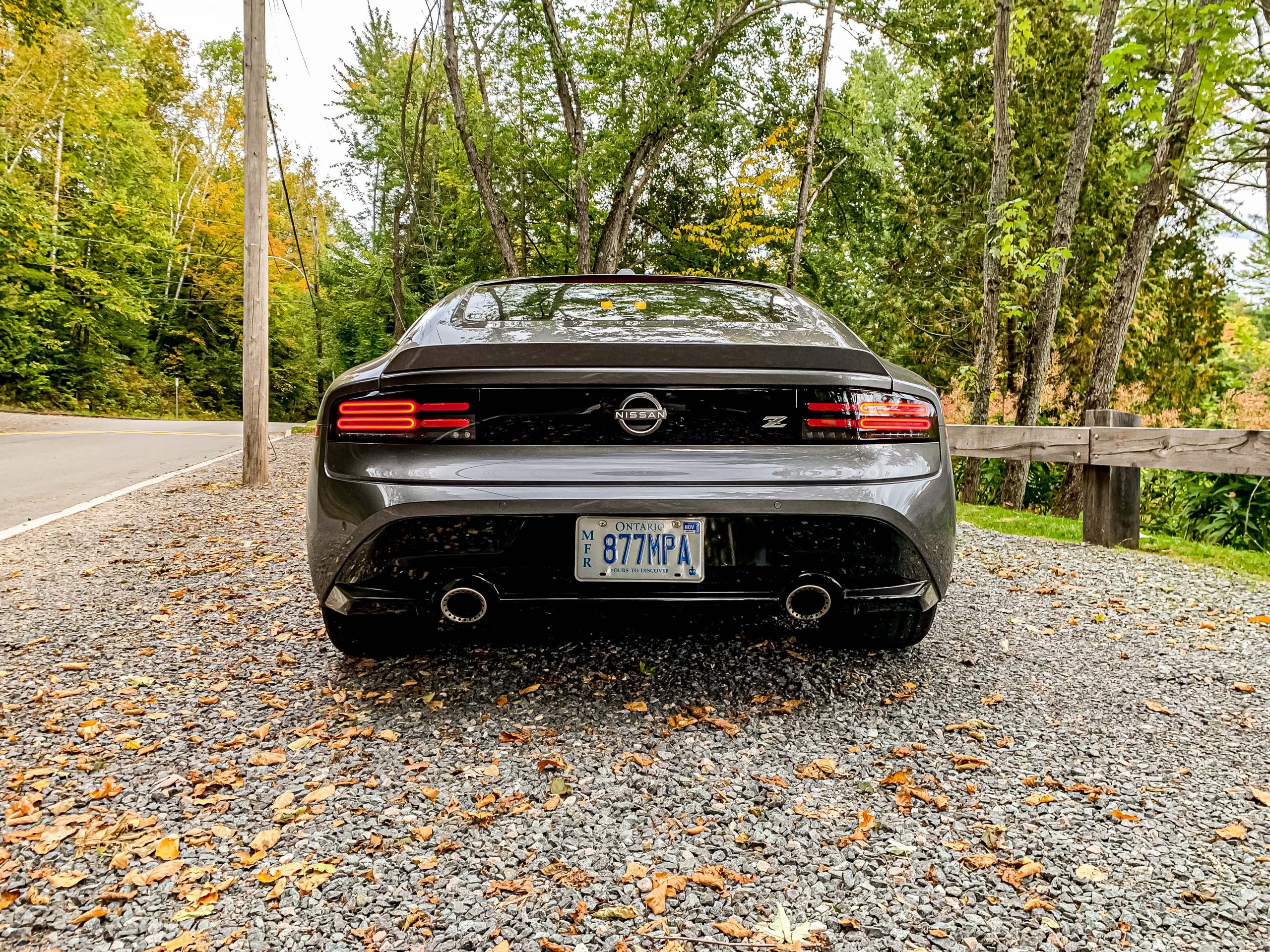 But then again, if price is your big concern within this segment, I would walk right past the new Z and go for something much slower — the Toyota GR 86. You’ll save some money, and while you might not win any races, you will enjoy your driving experience so, so much more.

The Z is not a bad car by any definition. The big problem with the Z is not that it isn’t as fast as the GR Supra. Or as much fun as the GR 86. Or not quite as good of a bargain as the Mustang or Camaro.

The problem is that it’s not any of those things. It has no party piece. Nothing you can discernibly look at and say “that’s why you should buy a Z.”

Beyond the price point, Nissan thinks their big ace in the hole is the heritage of the Z — the nostalgia and the fact that theirs is still a totally Japanese product. That might work on some brand loyalists, and it might be enough to earn some ink in the short term. But in the long term? The Z needs something real, something tangible to be competitive in this segment. Especially amongst buyers who value experience over everything else.

So, A for effort, Nissan. I’m glad the Z is back. But if I were you, I’d get started on a NISMO version ASAP. Because hype will only take you so far.