Join the Conversation (0)
The Acura ILX was a really good entry-level luxury sedan with a naturally aspirated i-VTEC 4-cylinder that reminded us of older Hondas. But slow sales meant it was a rare sight on the roads. It wasn't very big, and its alphabet soup designation likely conjured up to “fit in” with other Acura models, wasn’t especially memorable. In today’s market, a small, forgettable sedan competing for oxygen in a world of crossovers is basically doomed.

Fortunately, Acura had a perfectly good name sitting on the shelf: Integra. It’s a badge that capitalizes on 90s nostalgia and the peak of the Japanese sports car boom.

The last Integra was built on the Honda Civic platform, just like the ILX was and the new one continues that tradition. 20 years ago when the Integra was last sold, the Civic was a much smaller car. Today’s Civic and subsequently, the Integra, have grown into Accord-like proportions but that means plenty of room for passengers even in the back. And because it’s based on the Civic hatchback, there’s a huge cargo well behind the rear seats.

That utility takes away some of the advantages a crossover has over a sedan. And given how unpopular most hatchbacks are on this continent, the new Integra’s coupe-like profile helps it avoid that classification altogether. 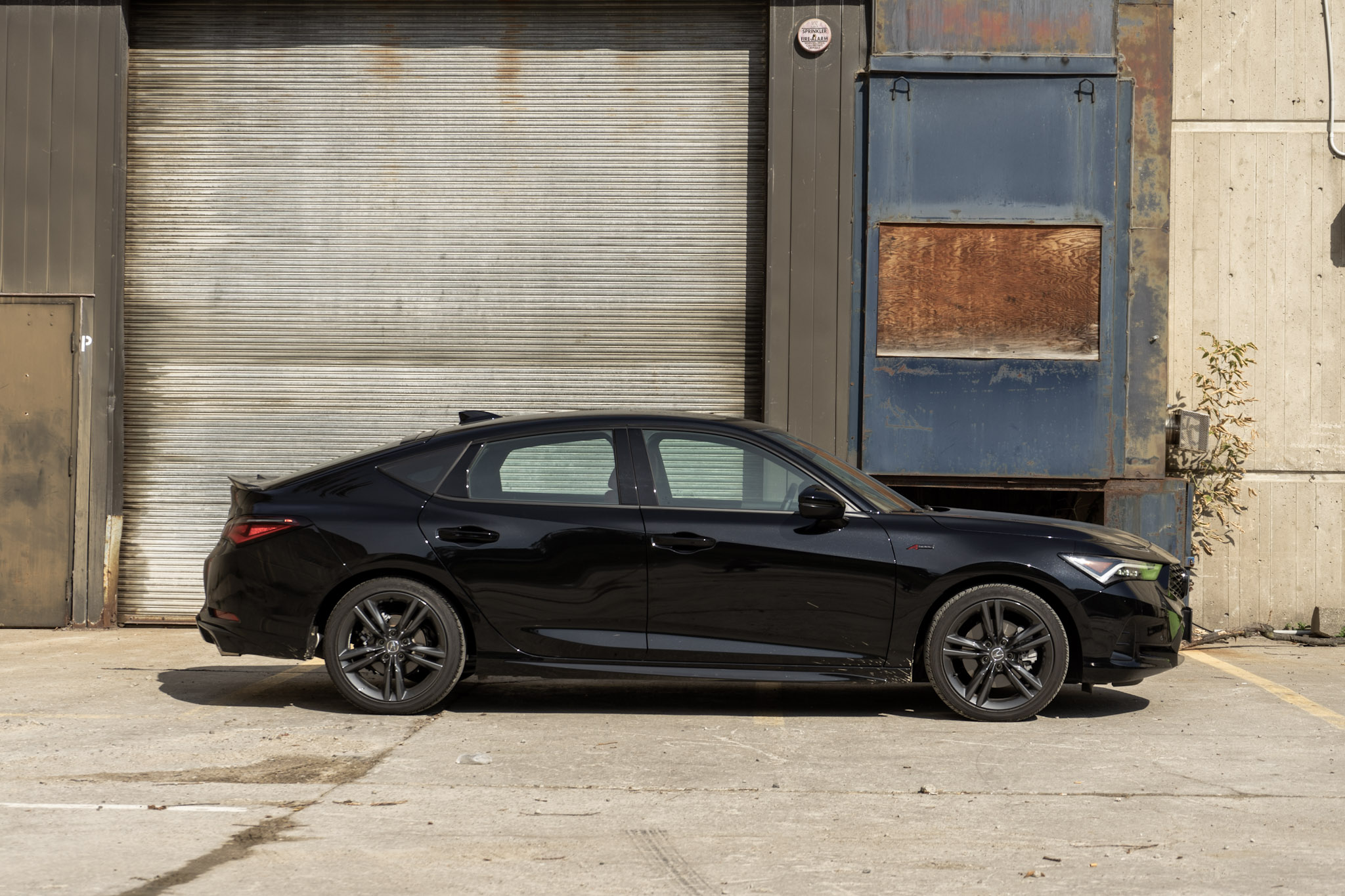 I understand why so many were upset, and in some cases mortified when this Integra was revealed because it’s not the version of the car they’d like to remember. After all, in its heyday, the Integra, specifically, the 3-door coupe was a living legend. When I was in high school, it was the car to have. Examples like the GS-R had a fizzy 8000-rpm 4-cylinder, a manual transmission, leather seats, a sunroof, and a CD player. Everything you could possibly want in a sports coupe.

But the real treat was how it went around corners. With double wishbones in the front, telepathic steering, and magical suspension tuning, its handling transcended its economy car roots. The automotive press called it the best-handling front-wheel drive car in the world. It was even affordable, not counting the Type R, which was unobtanium even then.

At its core, the Integra, like the ILX, was a gussied-up Civic with better styling, and “luxury” add-ons. But it was also sportier. Taken in this context, the new Integra is exactly this, a sportier Civic hatchback with more presence and a more expensive feeling interior.

From behind the wheel the Integra feels unsurprisingly like a Civic Si. Just with more sound insulation. It gets the same 2.0-litre turbocharged 4-cylinder as the Si and makes the same 200 hp and 192 lb-ft of torque. Underwhelming numbers considering its competition. Also disappointing is the 6500-rpm redline that just feels strange in a Honda. 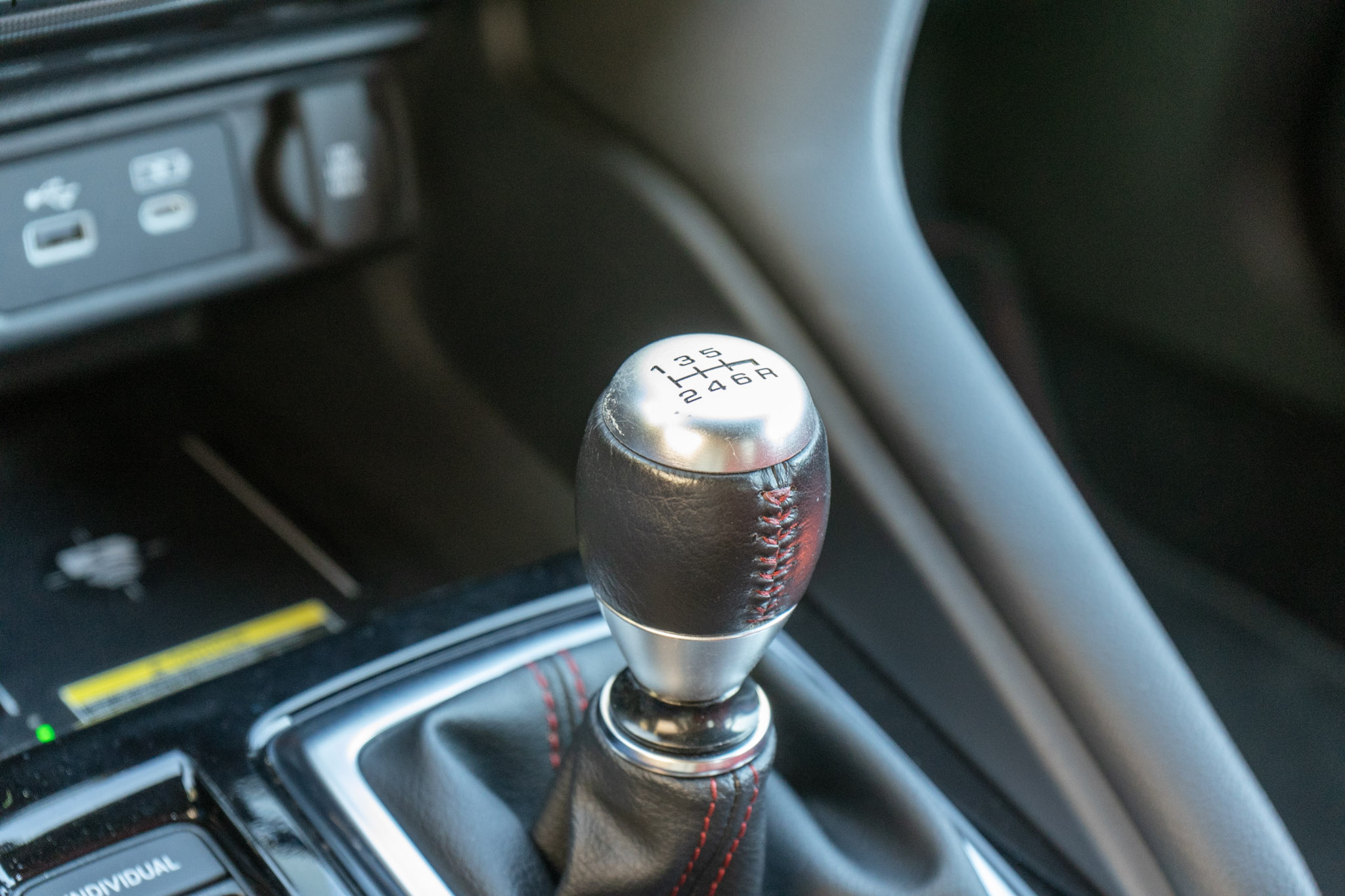 But the numbers only tell part of the story. The motor spins quickly, and when it comes time to change gears, the snickety gearbox, also taken from the Civic Si, delivers the perfect feeling shift. No one makes manual gearboxes this good anymore, with the exception of Porsche, the Mazda MX-5, and maybe a few others. Short gear ratios mean you’ll be reaching for that vintage-style Type R shifter more often but it also means that it feels quicker than the numbers suggest. Once in fourth gear and above, the juice runs out but it never feels slow, and more power is always a happy downshift away. It’s only when you drive something like the Subaru WRX or the Mazda3 turbo, do you notice the deficit under the hood.

There’s no deficit when it comes to handling. It starts with a nimble and light front-end feel so characteristic of Hondas. The steering is precise, although weighting can feel artificially heavy at higher speeds but body control remains excellent. A helical limited-slip differential cancels out any torque steer and you can power out of corners with all 200 of the Integra’s horses. 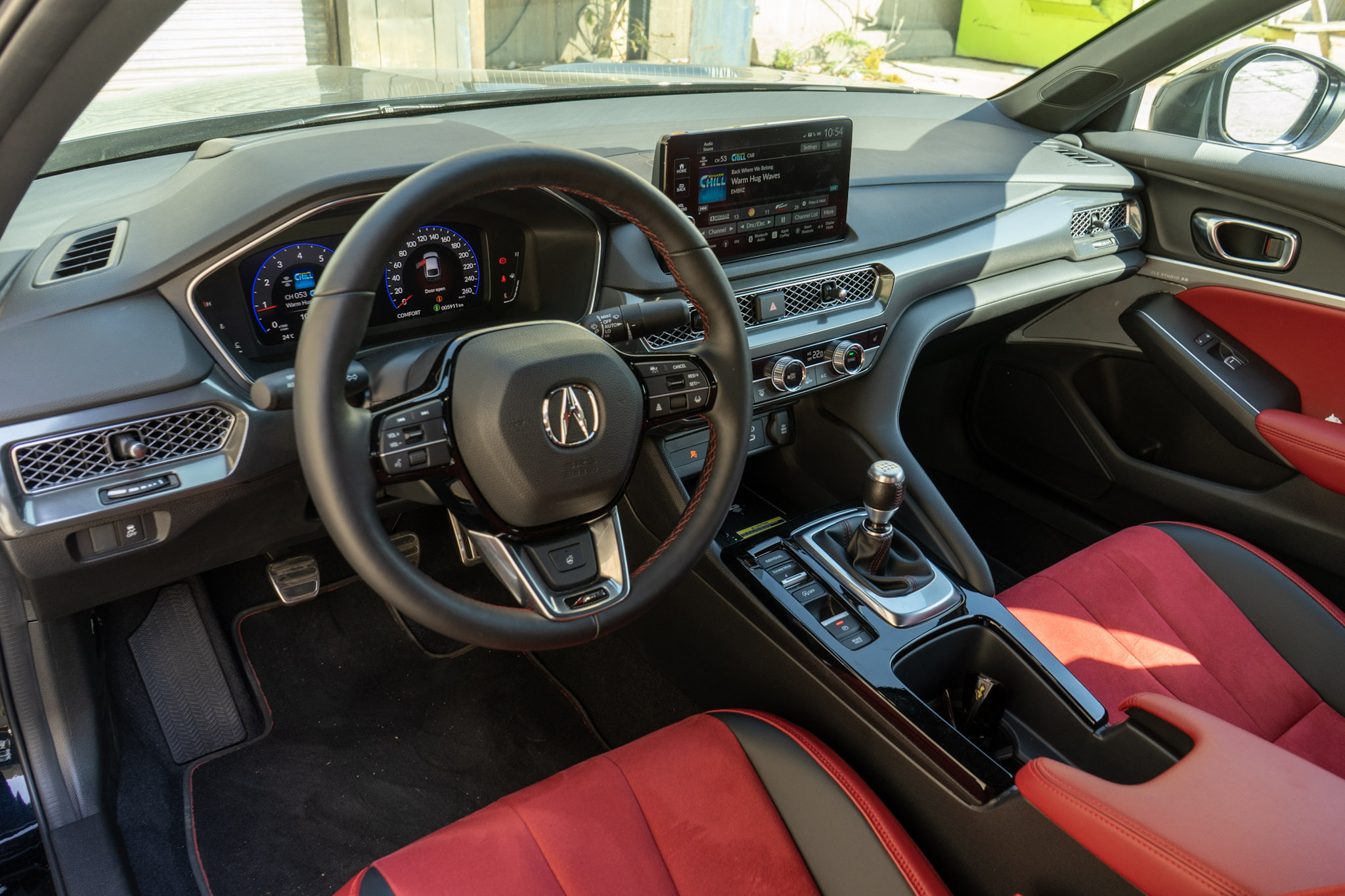 Using the drive mode controller, you can cycle between Comfort, Normal, and Sport. In “Comfort” mode the Integra delivers a convincing luxury car ride that’s something you’d expect from a bigger vehicle. Even in “Normal” and “Sport” it never approaches the stiffness of the Civic Si but also doesn’t feel like a wet noodle when the road starts to bend.

I really liked the new Civic Si, and gave it a glowing review but my one gripe was that it wasn’t available as a hatchback. The Integra solves this problem but it will cost you dearly if you want the manual transmission. Unlike the manual-only Si, the Integra stickshift is only available on the top-spec trim, which means its $42,550 price tag is a nearly $10,000 markup over the Si. That’s a lot of cheese no matter which way you cut it. Starting price for a base Integra is set at $34,350 a hair more than the Si, but you miss out on a lot of what made my tester feel special. 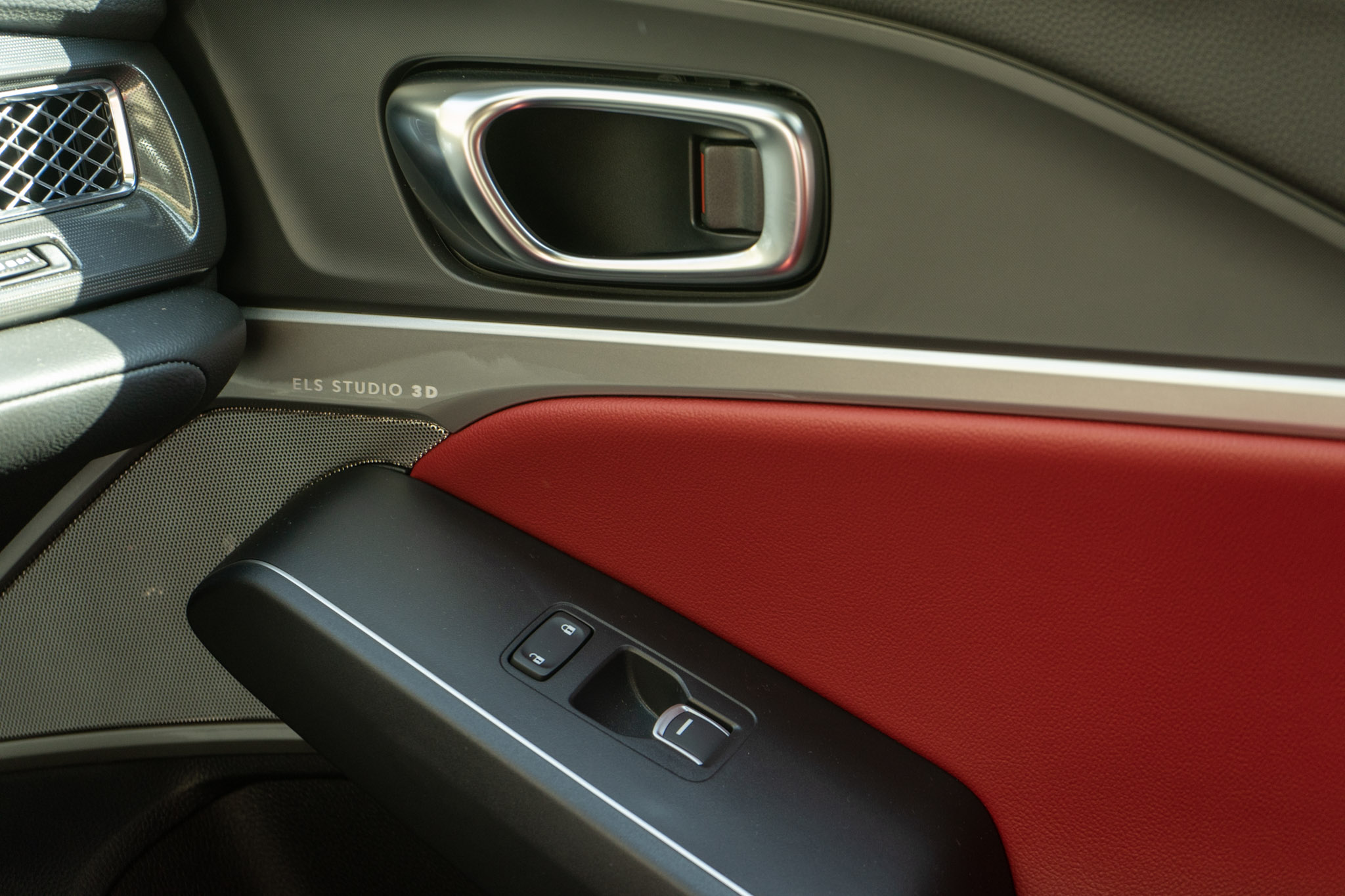 Most of the “Acura tax” is spent on the interior. Bright red leatherette and micro-suede seats, a thumping 16-speaker audio system, and better feeling touch points, the Integra doesn’t feel too far off the mark set by its bigger and more expensive siblings.

It would actually compete nicely with the Audi A3, BMW 228i Gran Coupe, or Mercedes CLA. It offers something completely different and frankly a lot more fun than the ubiquitous German sport sedan and comes across as better value even without all-wheel drive. Its interior is more convincing than the Mazda3 Turbo, the other economy car vying for your upmarket dollars, and no one else offers a manual transmission. 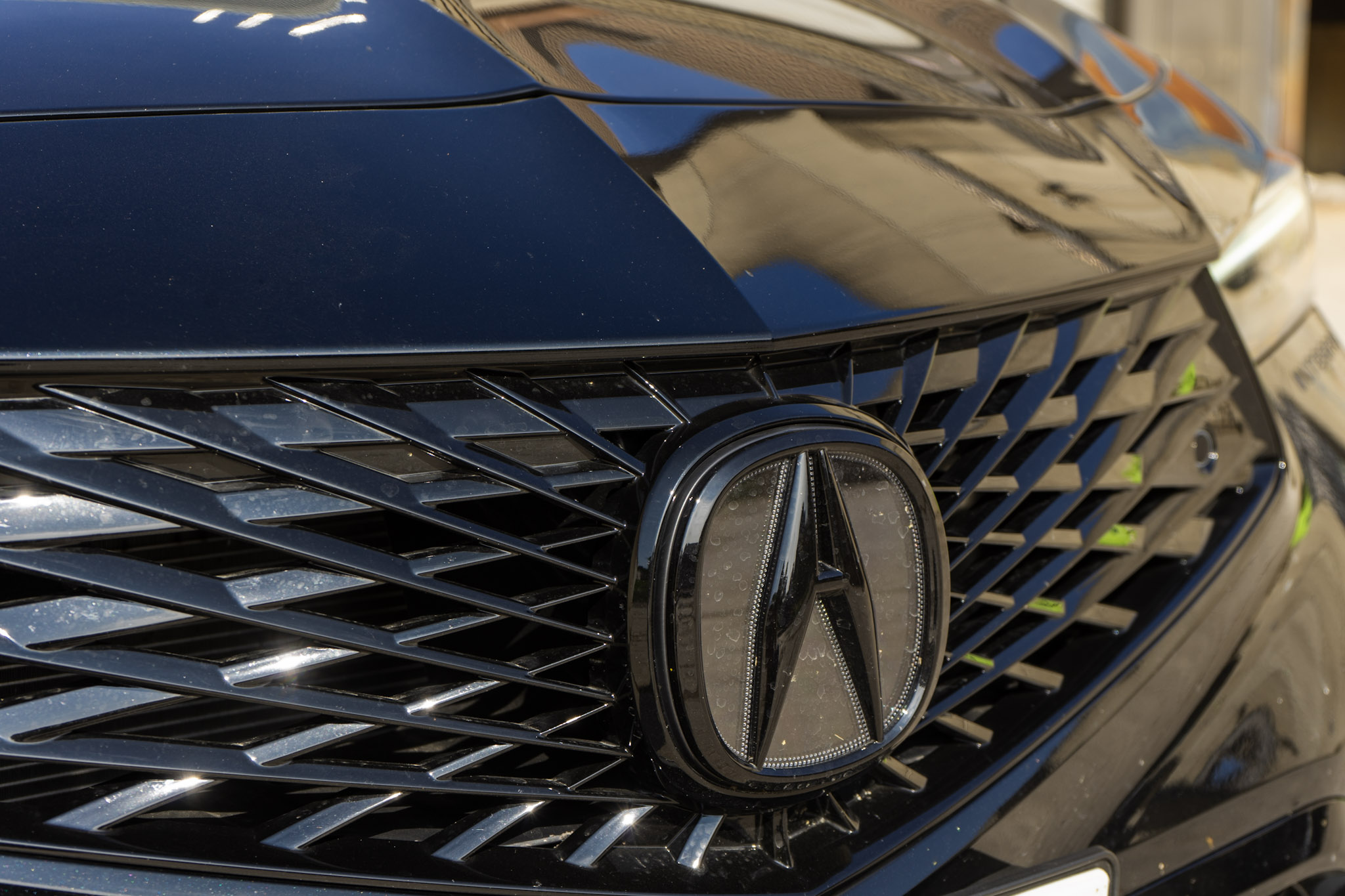 It boils down to how much that Acura badge is worth to you. The Civic Si costs less, sounds better, and there’s more feedback through the controls, but it doesn’t have the Integra’s classier styling and upscale interior finishes. It might not be that high-revving, bug-eyed coupe from the 90s but it’s about as good a representation of the Integra name as you can get in 2022. Furthermore, it’s a small and sporty, luxury sedan with a manual transmission, and we can all get excited about that.