Join the Conversation (0)
In the interest of full disclosure, I like Subarus. From the BRZ to the Ascent, the company has a unique way of tuning its vehicles to make them more comfortable than their competitors, and I'm a big fan of comfort. The Forester, in my opinion, was the one model that didn't share that common trait. Instead, it felt more like a crossover from any other brand: dull, a bit rough riding and uninspired.

For 2022, Subaru has updated the Forester with new styling, a new generation of its driver assistance suite, and some other small interior changes. The company has also adjusted the suspension tuning, and that's what has caught my attention about the new package.

First, the styling changes. You might notice them with the 2022 parked beside a 2021, but the differences aren't very big. It's what Subaru has done the last few years, and it's working for the company. The Premier trim I drove gets chrome slats around the revised fog lights and gloss black trim around the glass, and the LED headlights (and both fascias) are new.

A handsome design, the Forester shows that you can make it perfectly clear you're capable of heading off-road without the over-the-top aggression that seems to be necessary in every other off-road intender. Instead of invoking images of crashing over jumps and pulverizing rocks, the Forester looks like it will gently ease past a family of deer along the roadside. The massive greenhouse and low cowl give you an impressive view of all of the nature the design implies you'll be visiting.

The shape is also a large box, and that means it can hold plenty of cargo. It has 762 litres with the seats up and 1,957 (2,101 on base trim models) with them folded. It's a mostly square area with a low floor and a wide tailgate to make loading easier.

I'd like some more storage cubbies in the cabin for small items, but Subaru has added a little feature that is a nice touch for anyone planning on actually using it in the outdoors. Two small hooks in the roof of the cargo bay are meant to let you hang up jackets, towels, even wetsuits. It lets them air out and dry while you're relaxing or driving home.

The tall greenhouse suggests it might have the most headroom in the class, but the low cowl (a benefit of the flat-four engine) means even drivers who sit lower should enjoy excellent visibility in all directions. A large panoramic sunroof lets in plenty of light, but the large opening comes with a manual slide shade. We're not sure how a driver of average height will be able to close the shade without hopping in the back seat, because it's a long reach rearward to get to it.

Big dials for climate control are easy to use, and main radio functions have real buttons too, with a handy paddle for the (extra-hot) heated wheel and toggle switches that keep the heated seats on between starts. A 6.5-inch screen is standard, but Limited and up get an 8.0-inch screen like this one. Android Auto and Apple CarPlay are standard, but neither they nor the charging is wireless. 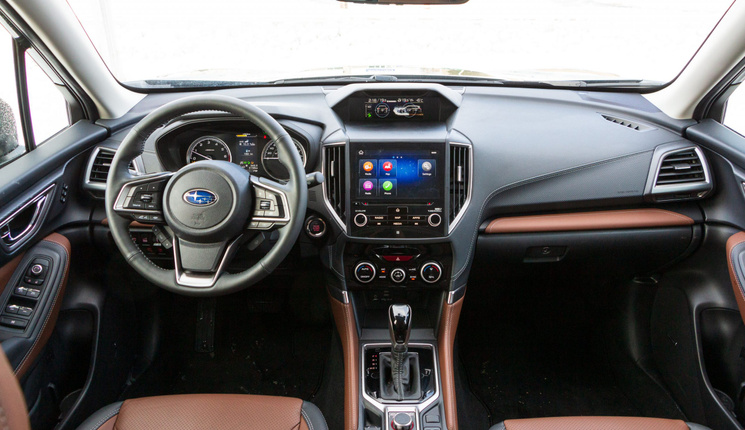 That driver monitor, called DriverFocus Distraction Mitigation, uses cameras that watch your eyes. Even through polarized sunglasses, the system can tell if you're watching the road or looking away. Look away for too long and it beeps at you (nearly every feature of a Subaru beeps at you) and puts a warning on the dash display. It works very well but does have two issues I think are serious.

The feature comes only on the top two trim levels, and the beep isn't loud enough to be heard when the climate fan is above medium. A feature like this should be available across the board, and it needs to be a bit more insistent in its operation. At least more than one beep would be an improvement.

Side perks of the system, it can recognize multiple drivers and store radio settings and other settings for each one. New this year, it also has gesture control. Raise a hand to raise the temperature, make a fist to lower it. Handy. 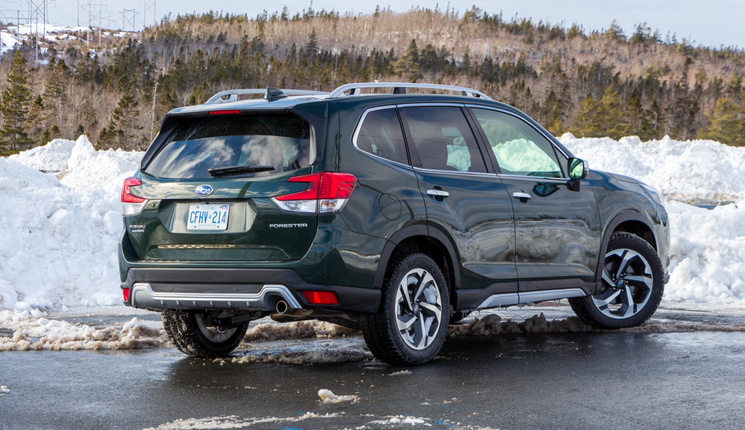 Subaru's 2.5-litre flat-four is unchanged for 2022, offering 182 hp and 176 lb-ft of torque. Nothing stands out about this engine, positive or negative. It's not notably quiet, but it's not noisy. It's not quick, but it's not underpowered. A CVT is the only transmission offered, and aside from a hard ratio change at around 63 km/h, it's one of the better ones. Would I like more power? Always. Does it need it? Probably not.

Also new this year, Subaru's X-Mode driving mode has a useful tweak. The terrain mode quickens the response of the AWD system, among other features. For 2022, X-Mode will turn itself back on if you engage it, drive over 40 km/h, and then slow down again. Last year, it would stay off once you were going too fast.

Subaru's EyeSight driver assistance suite is all-new this year, using new and more capable cameras that can see wider and longer, better-able to spot pedestrians and cyclists. The radar cruise is also a bit more natural-feeling and better responds to situations where you get cut off. Its newest addition is Emergency Automatic Steering, which can swerve around an obstacle if there's no time to stop. Fortunately, I didn't test this one in action.

Ok, back to that suspension. The Forester has been softened, so now it feels rally-car smooth like the rest of Subaru's line. There is plenty of body roll if you head quickly into an off-ramp, but that's not the point of a crossover.

The point is comfort, and the long-travel suspension offers that in abundance. It's not as soft as the even taller Wilderness trim, but this Premier has levelled up against its competition in ride quality. That makes for a more pleasant highway ride, but it's especially nice in the city, where winter roads and water-filled potholes are absorbed instead of sending spine-compressing jolts through the cabin.

Even better, it's much more compliant when you're headed down gravel roads to that secret lake, campsite, or mountain bike trail.

Subaru hasn't made any earth-shattering changes to the 2022 Forester, other than the Wilderness off-road trim. Instead, the company has made small tweaks and feature changes that add up to a more pleasant experience that also offers more safety. For me, in the compact crossover segment, the Forester is not too hard, not too soft, but very close to just right. It would be even closer if more of the driver assists and a heated wheel were available on more affordable trim levels.