Join the Conversation (0)
In my suburban neighbourhood, I live near a lot of car fanatics, which means my driveway regularly plays host to impromptu car shows.

One car that can be counted on to draw a crowd, without fail, is the Porsche 911.

An enthusiastic neighbours popped by one morning as I was getting ready to head out in the 2022 911 GTS. He expressed surprise that I was driving a 911 in the dead of winter; I replied that I was more surprised to be offered a cabriolet at a time of year when the weather could easily conspire against its plushily upgraded interior.

“Oh, you just don’t get it,” my neighbour shot back as he broke into a story about a convertible he once owned. He winter-drove with the top down so religiously, he said, that he froze out a relative who chose instead to walk to her destination.

Truly, the decision to go topless in Canada is a dedicated way of life. 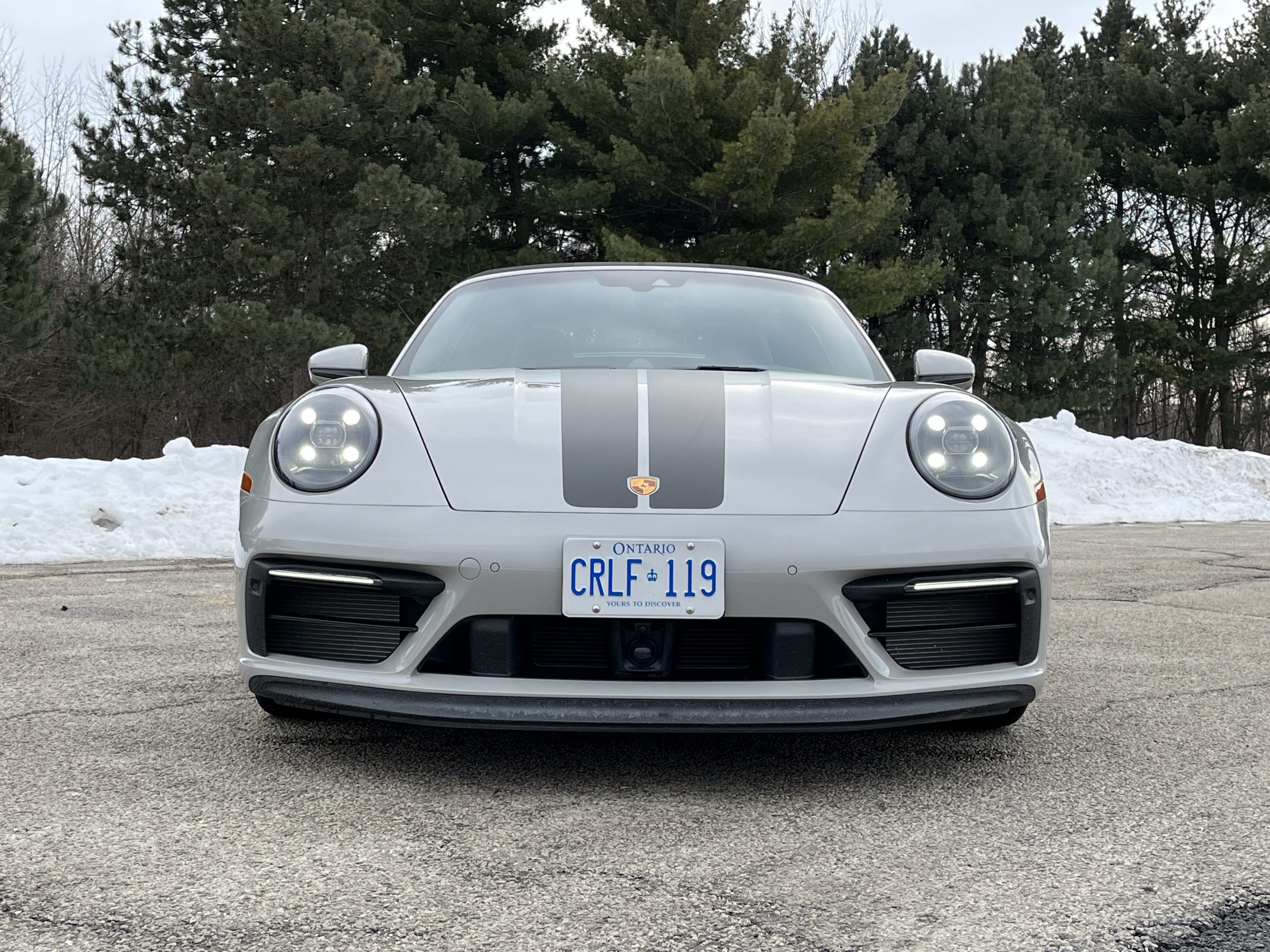 As for the part about winter-driving a 911, that’s less questionable than one might think. In fact, Porsche deliberately makes 911s available for winter test drives in Canada precisely to demonstrate that they can be driven year-round without compromise. And this theory holds up: as supercars go, the all-wheel drive on this 911 Carrera 4 GTS Cabriolet and a good set of winter rubber will get the car through city slush just fine, even with the 10 mm lower ground clearance provided by the standard sport suspension, an effect offset by the standard active dampers. Be ready to get that roof back up if weather hits — it’s a one-touch system that takes 12 seconds and can be completed with one hand at up to 50 km/h — and you’ll get through the colder months just fine. 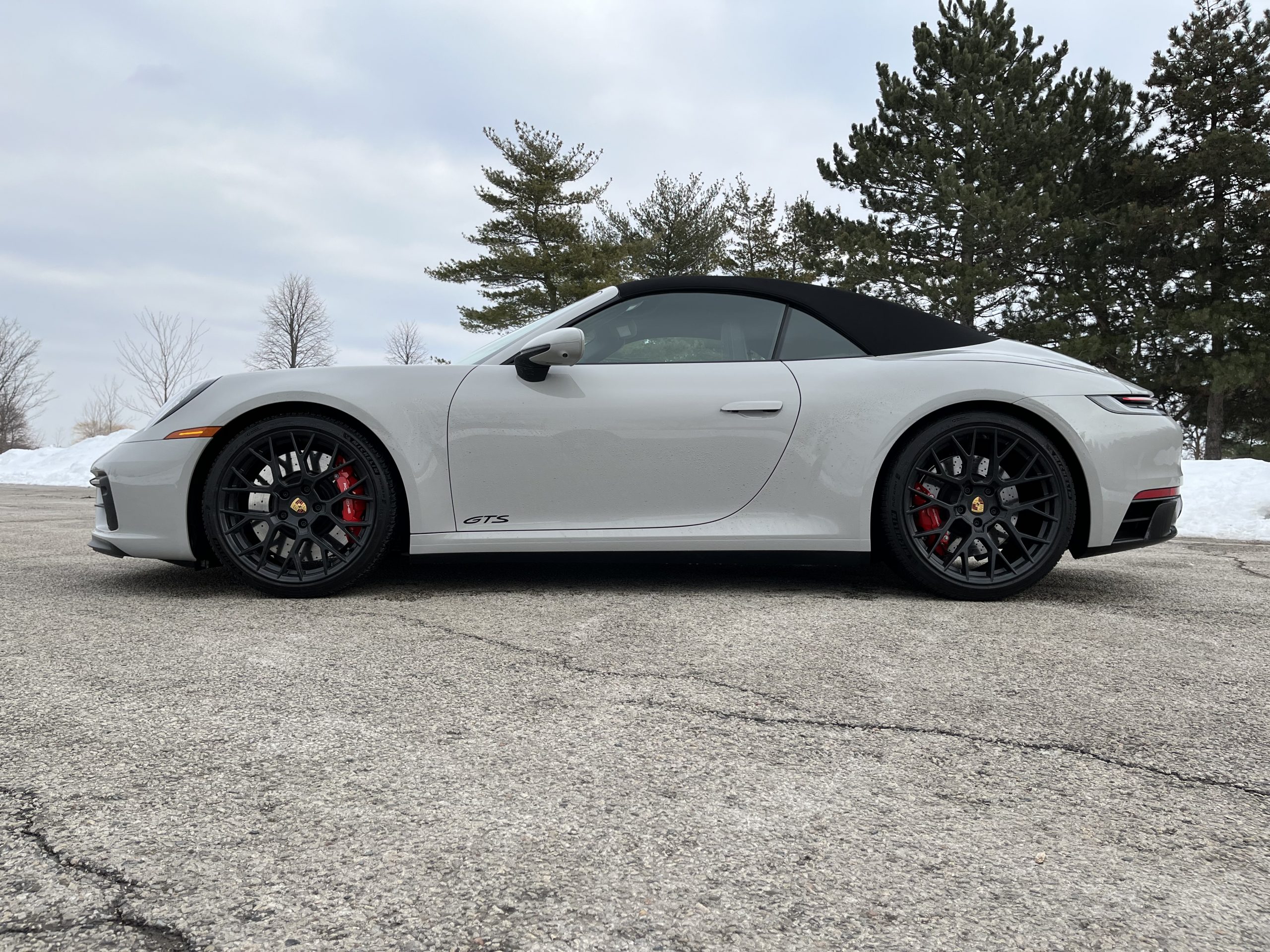 All of this is aided even further by the fact that the GTS provides a manageable amount of power, slotting artfully in between the base and S models and the over-the-top Turbo. This is where the 911 devotees will be itching to chime in, so let’s point out that this is neither a track test nor a study of Porsche powertrain history. However, during a February romp through snow-covered suburban streets, the GTS’s 3.0-litre twin-turbocharged boxer-six engine delivered its 473 horsepower and 420 pound-feet of torque in a manner that was clearly capable but also well within rein-in range when required. Crank open the sport exhaust, either by selecting a sport mode through the steering wheel mounted drive mode selector or by hitting the exhaust button on the dashboard, and it’ll sound absolutely stellar doing it, too. 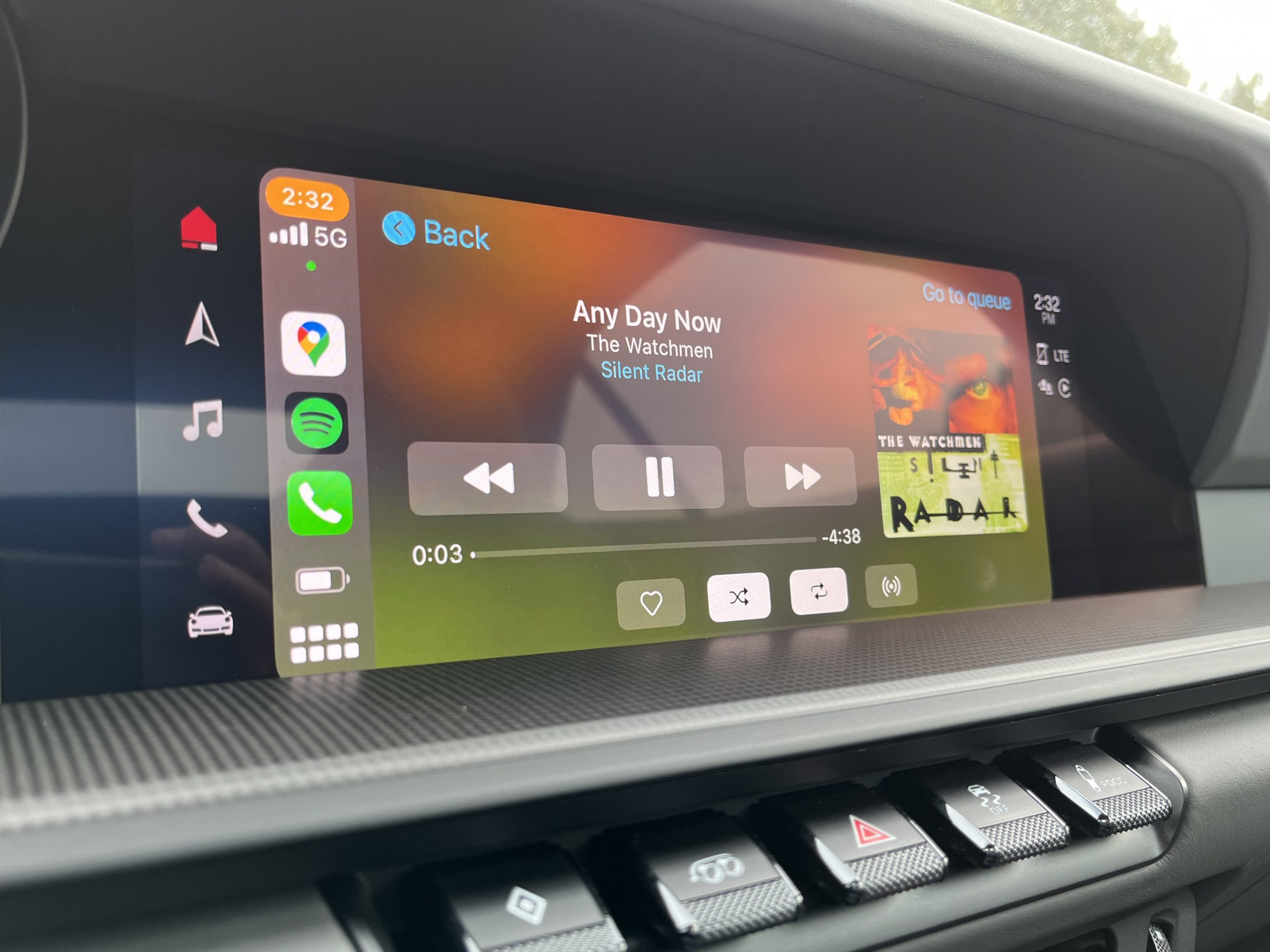 A seven-speed manual transmission is available, though as much as I longed for that visceral action of shoving shifter into gear, the eight-speed PDK (dual-clutch) transmission does the job more capably than just about anyone south of professional racing driver territory ever could. With lightning-quick steering wheel mounted paddle shifters, it’s also reasonably intuitive to operate. Or, at least, it is once you figure out that a hard vertical push lets you skip through neutral and head straight to drive or reverse.

Believe it or not, the fuel consumption ratings on the boxer-six aren’t horrible, either. Usage dictates everything, of course, but with this much capability on tap, an NRCan estimated combined average of 12.3 litres per 100 kilometres feels like a bargain, even knowing that prices are skirting $2.00 per litre for premium fuel.

The GTS can come with even more goodies. On the standard side of the ledger, it gets a launch control function, automatically extending rear spoiler, and wheels that are staggered front to rear (20-inchers on the former and 60-millimetre wider 21-inchers on the latter). If you’re willing to add onto the $173,700 base price, Porsche’s dynamic chassis control adds another layer to the car’s handling prowess. And don’t skip the rear-axle steering. The difference it makes in turning radius and responsiveness is phenomenal. 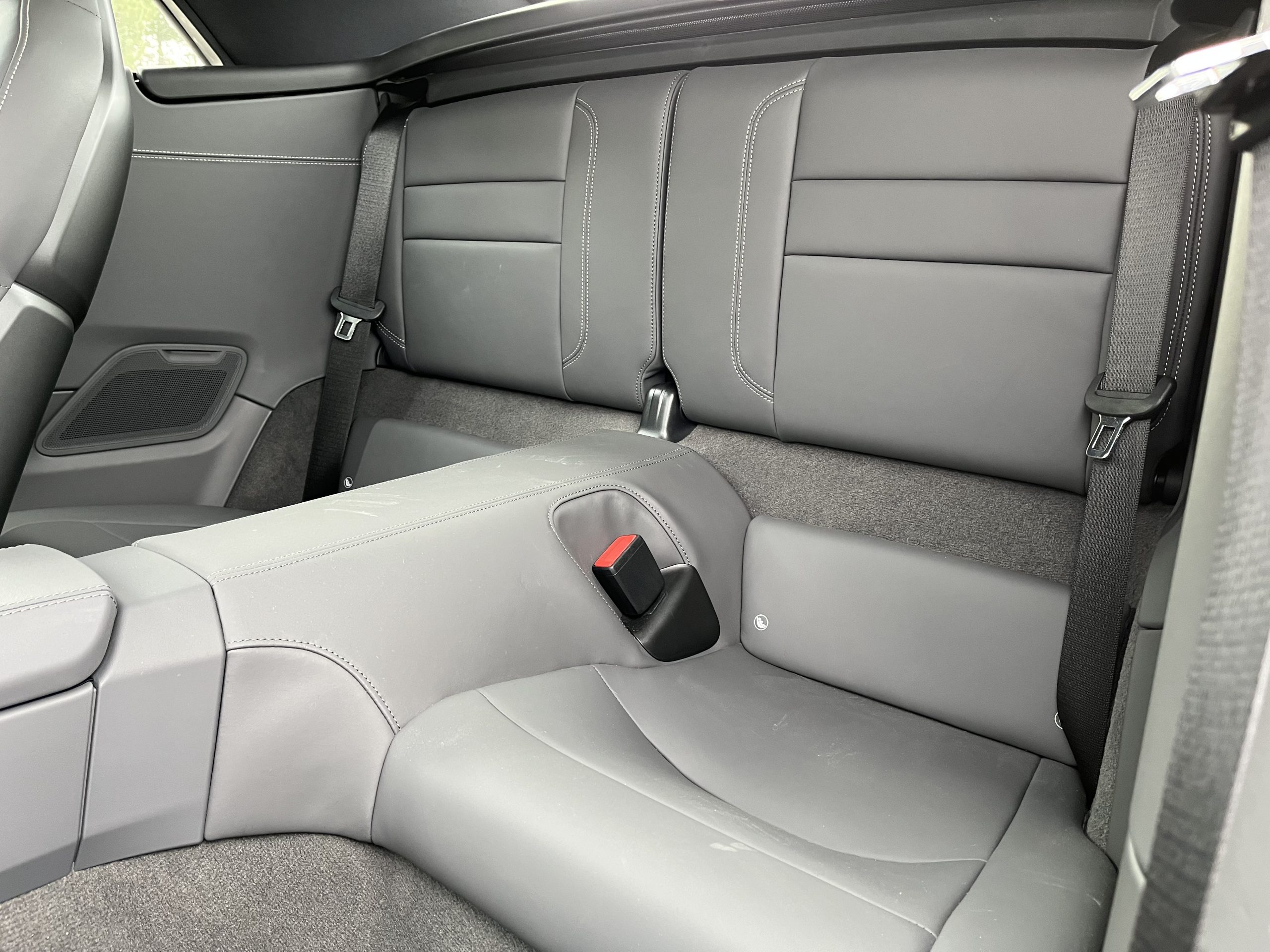 Any 911 comes with a set of known-quantity impracticalities. The 132-litre storage area under the hood isn’t going to hold a week’s worth of luggage or even a set of golf clubs, but it can take a carry-on sized bag lying down with a few more loose items around it. The rear seat is not appropriate for adults or even really for taller kids: my daughter, who isn’t yet old enough to legally sit in the front seat in some provinces, quite rightly didn’t want to sit back there because she felt unsafe without a headrest. Smaller kids will fit well, though, and while getting a rear-facing car seat in is potentially dodgy, there are LATCH connectors for front-facing seats in each of the two rear buckets. If your lifestyle allows you to use the second row for your golf clubs and not much else, none of this will bother you. 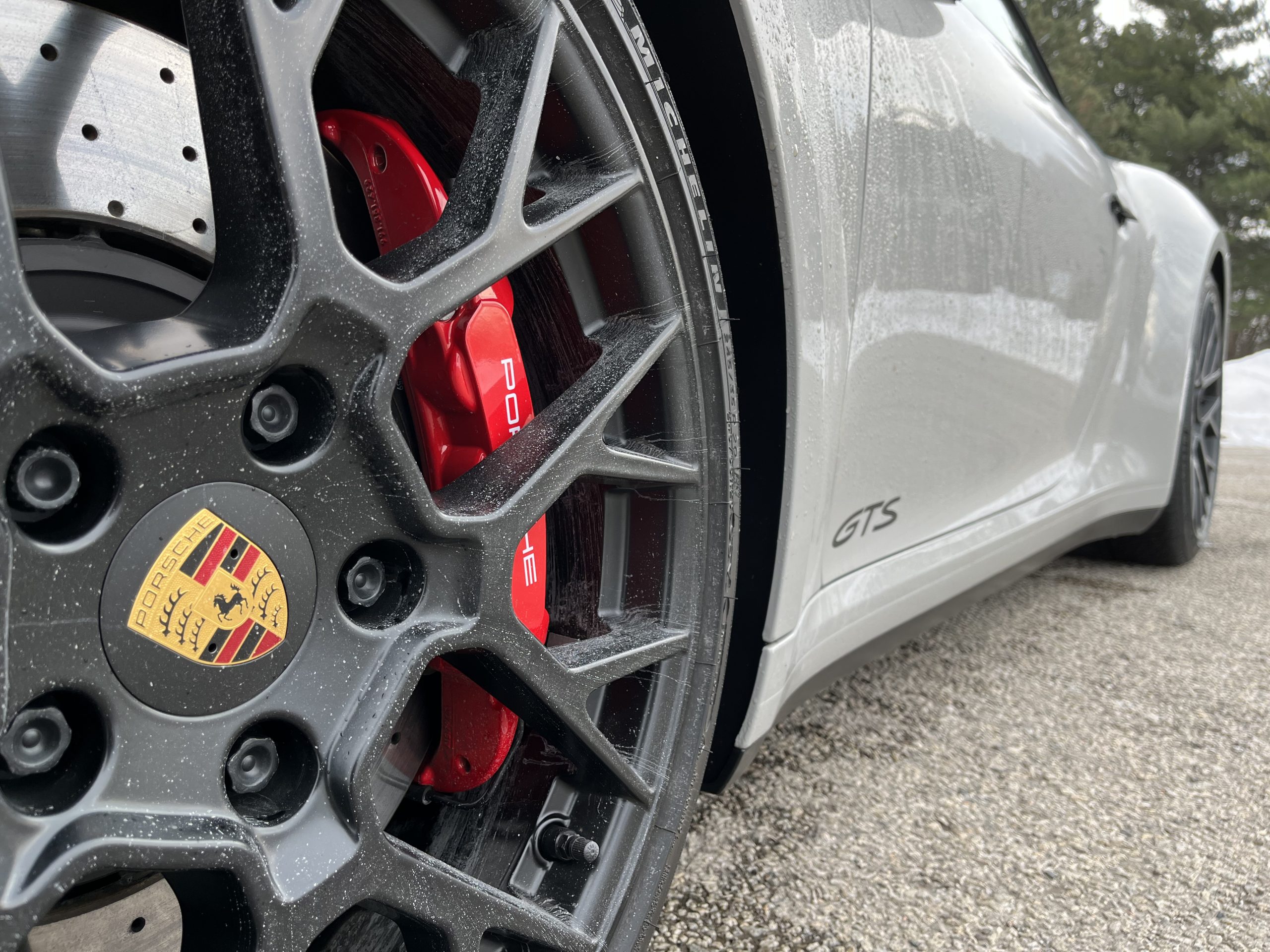 One former shortcoming of Porsche’s has been resolved: the latest generation of the brand’s infotainment system ships with wireless Apple CarPlay and Android Auto. This effectively renders any complaints about the rest of the system’s usability null and void. Leave your phone in your pocket, let it connect on start-up, and away you go with your preferred music and maps at your fingertips.

The upshot of all of this? Winter or otherwise, the 2022 Porsche 911 Carrera 4 GTS Cabriolet is notably short on shortcomings. And when one is spending north of $200,000 with options, this is precisely as it should be.