Join the Conversation (0)
The new Nissan Frontier, which gets a thorough makeover for 2022, is a great-looking pickup truck. More than one person stopped to tell me that. Someone even told me it was his “dream” truck.

Part of this might have to do with the resurgence of the smaller pickup, whose less intimidating size, and efficiency advantage is causing many to rethink how much truck they actually need.

New rectangular headlamps wrap around into the fenders and are complemented by running lights that give the Frontier a robot-chic look. The large blocky grille looks like a slab of granite and the telltale red tow hooks sprouting out from under the bumper are the now universal sign of off-road readiness. Add in some sweet new colours like my tester's Boulder grey, or the new Tactical green, or Baja storm and you have a genuine looker.

Most of the hardware underneath, including the frame, is largely carried over from the last Frontier, which made its debut over 16 years ago. Such old bones must surely feel outdated, and in some ways it does, but extensive updates keep this new Frontier relevant in 2022. 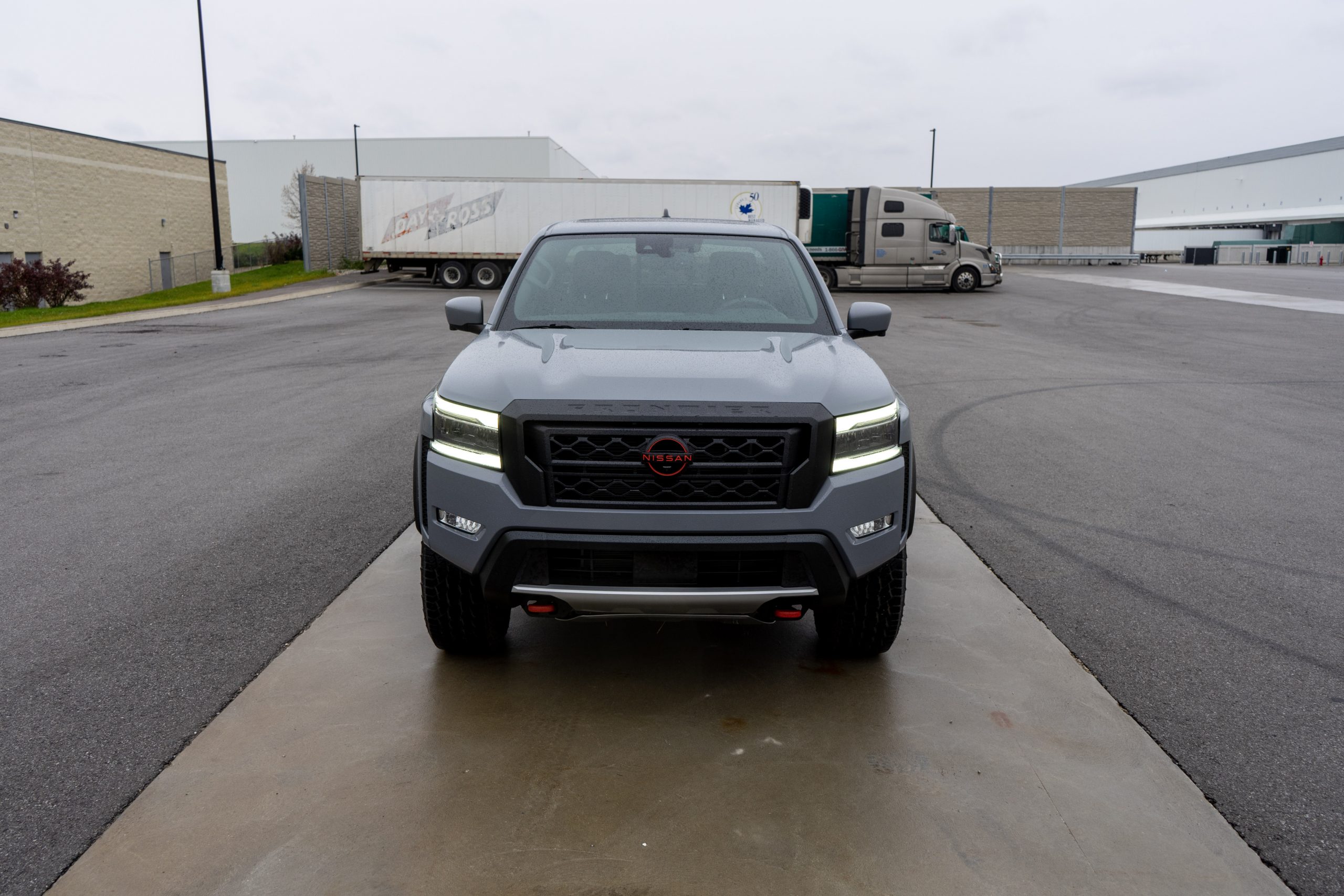 This might be one of the last vehicles on the road to use a hydraulic steering rack and because it’s essentially your main conduit to the road, much of the old school feel comes directly from there. It’s been re-tuned and given a faster ratio for better steering response and you get a fair bit of feedback through the thick rim but it takes too much effort to turn, especially at low speeds.

The only powertrain is a 3.8-L V6 connected to a new 9-speed automatic transmission. Its 310 hp is best-in-class and gets sent to the rear wheels by default. All Frontiers sold here are equipped with a shift-on-the-fly 4WD system with an electronically controlled part-time transfer case. A twist of a knob on the dashboard will engage either 4HI or 4LO. Since this is a mechanical system, these modes should only be used in low traction situations, like snow-covered roads or an off-road trail. PRO-4X models get a rear locker for even rougher terrain, and all Frontiers are equipped with Hill Descent control. 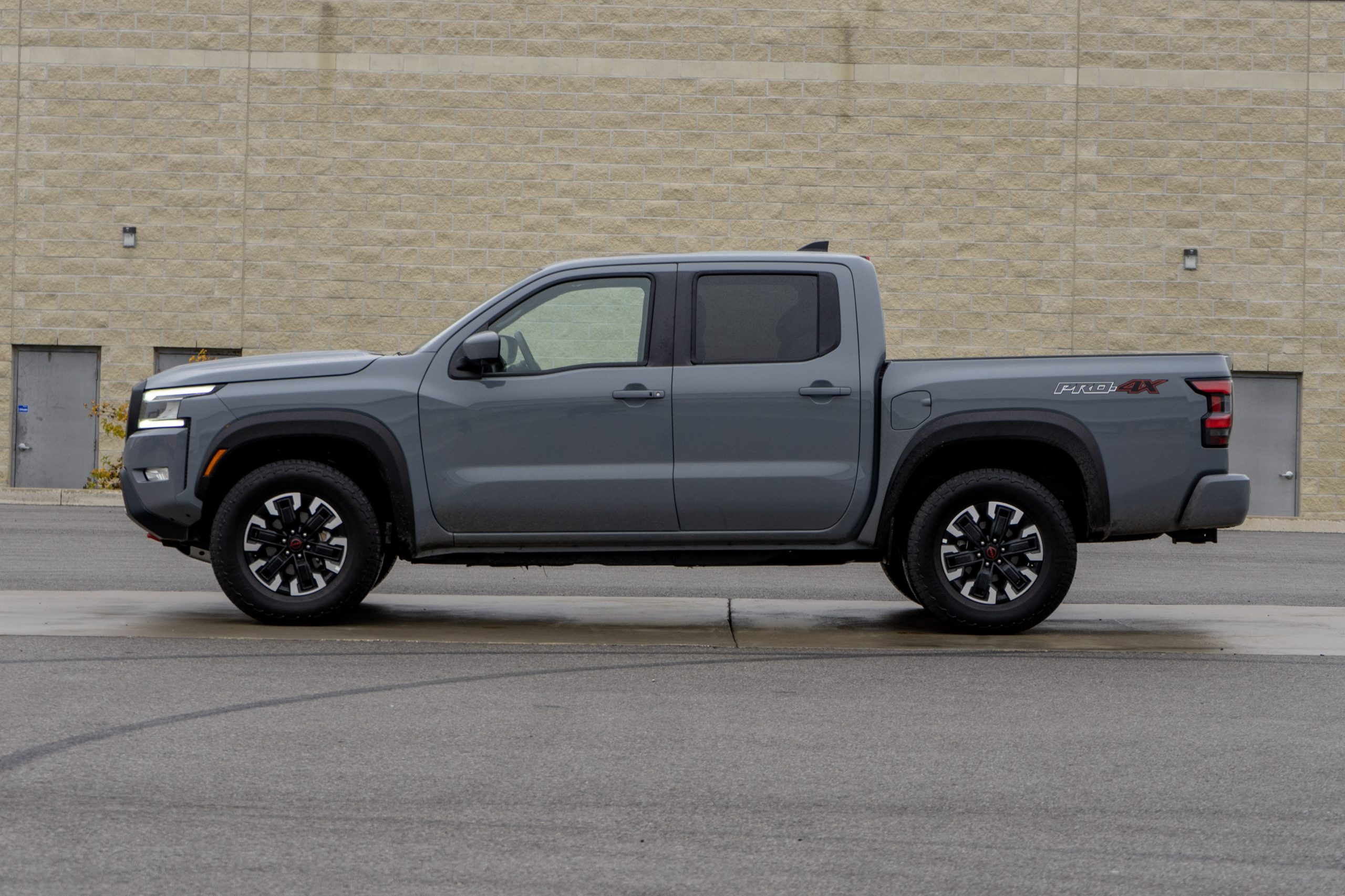 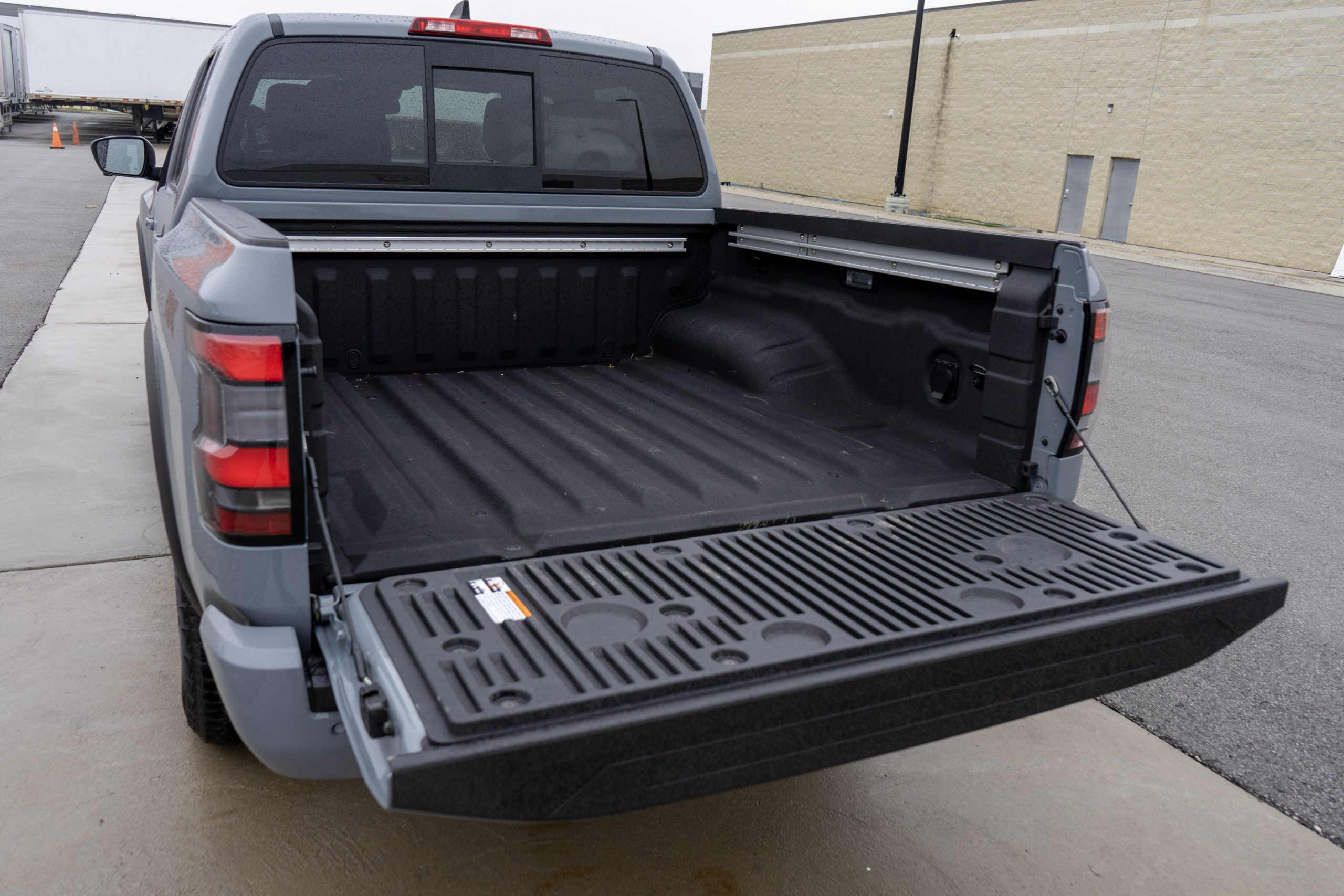 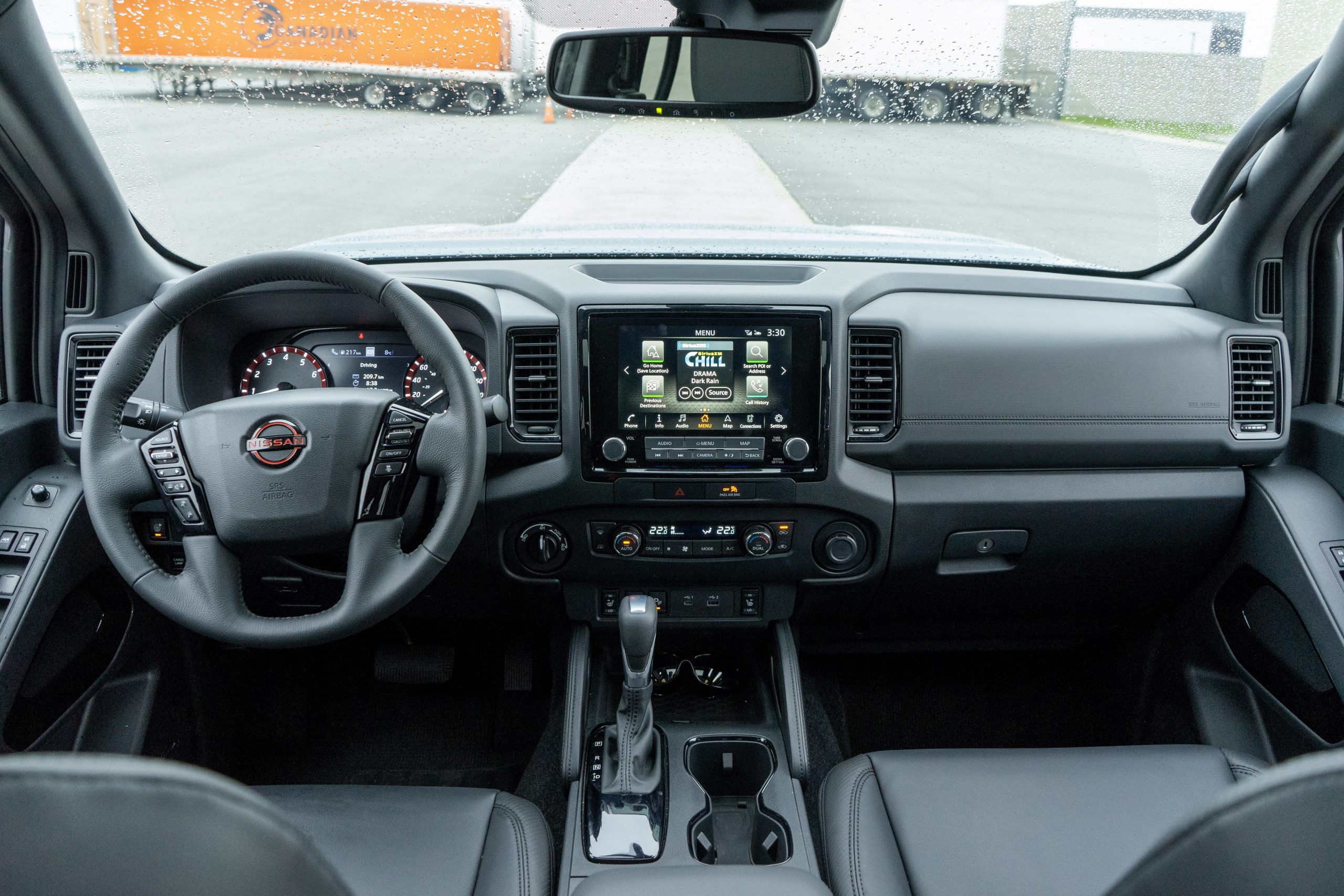 The Crew Cab Pro-4X model you see here is top of the Frontier food chain and gets underbody skid plates, Bilstein off-road shocks, red Nissan badging, and a 9-inch infotainment touchscreen, the largest in the class. Nissan’s around view monitor with moving object detection and off-road mode is the first application of its kind and gives you multiple camera angles when rock crawling or negotiating a tricky trail, reducing the need for a spotter.

The Frontier is loaded with character, and it might be the best thing about it. It’s certainly not the interior, which is dark and drab, full of hard, scratchy plastic, and has all the design flair of that little waiting room they put you in at the doctor’s office. Rear seating is upright and is tight for taller people, but the seat bottoms flip up revealing handy storage bins underneath. 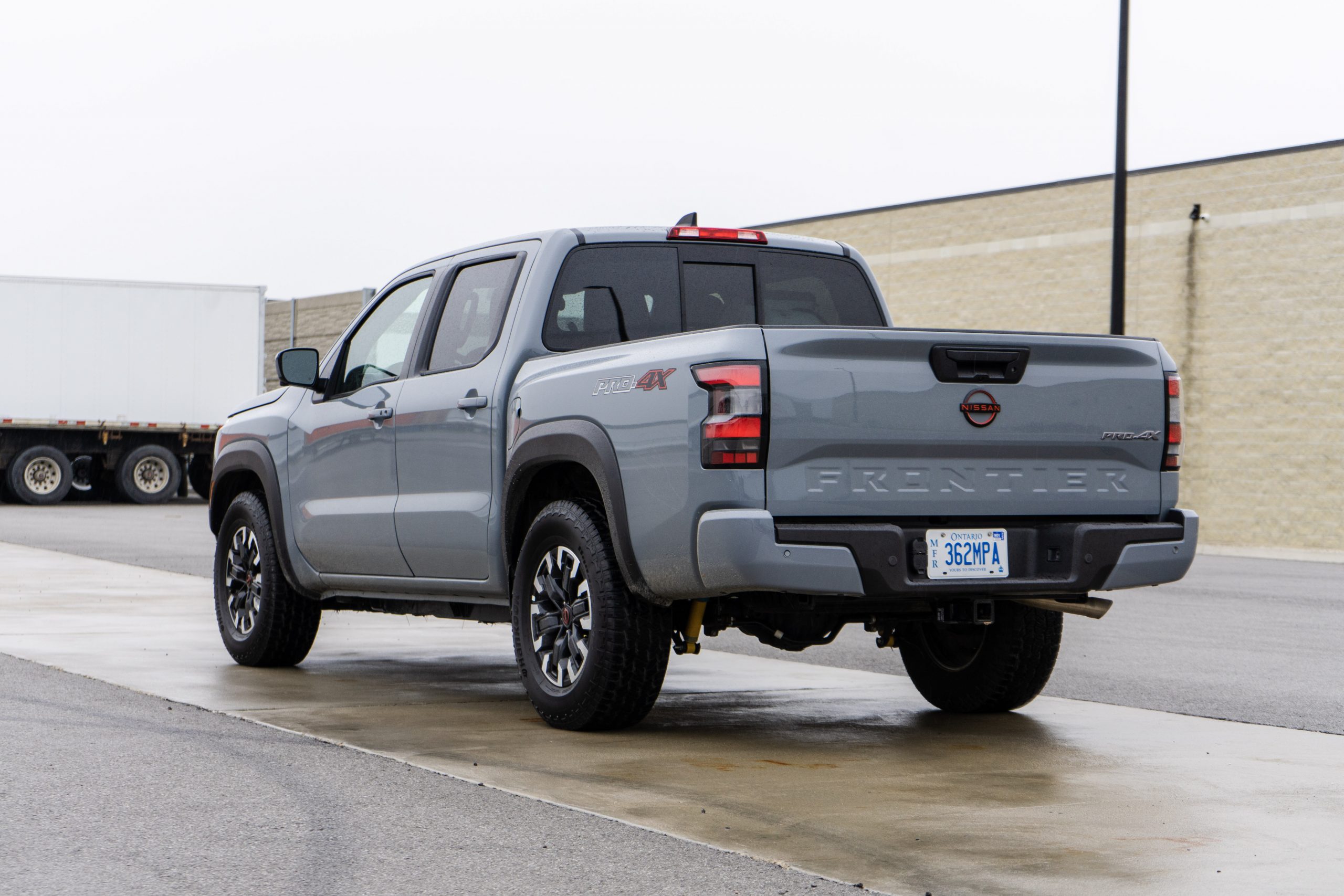 The Frontier's character comes from the way it drives. Get past that heavy steering and you have a truck that is maneuverable with a relatively good ride albeit one that gets a bit choppy over rough surfaces. The chassis despite being nearly two decades old feels stout and damn near indestructible, the way it should in a vehicle like this. The big V6 makes ample power and the 9-speed, though not the fastest shifting transmission, is a big improvement over the ancient 5-speed box that it replaced. Like the Tacoma, the Frontier feels like something you can count on day in and day out, and that robust, dependability made this reviewer feel all warm and fuzzy inside.

I didn’t take this truck off-road or tow anything with it, but it helped me carry some large boxes, a table, and a few chairs to our storage space proving how useful a pickup that isn’t the size of a building can be in the city where lanes are narrow and parking spaces are scarce.

The 2022 Nissan Frontier might not be the most modern, or the most capable in its class but it does all the pickup things right and is a welcome entry into the growing mid-size truck space.