Join the Conversation (0)
Walking up to the Sonic Grey Pearl Honda Pilot TrailSport, two things immediately jump out at me. The first is that the blacked-out accents and matching 18-inch alloys do a convincing job of making this newly released model look a lot like the top-tier Black Edition. In fact, other than the size and style of those rims and the lack of a telltale badge on the grill, the two could be twins.

The second is that this TrailSport – Honda’s “adventure ready” trim line – doesn’t have any recovery hooks. In fact, there aren’t even any removable hatches in the front bumper that could be ejected to accept a towing hook (those disappeared along with said eyelet when the third generation Pilot this is based on debuted in 2016). And unless you add an optional tow package, there’s nothing in the rear either. Digging a bit deeper, I take a peek at the undercarriage. There are no skid plates bolted up either. Hrmm…? 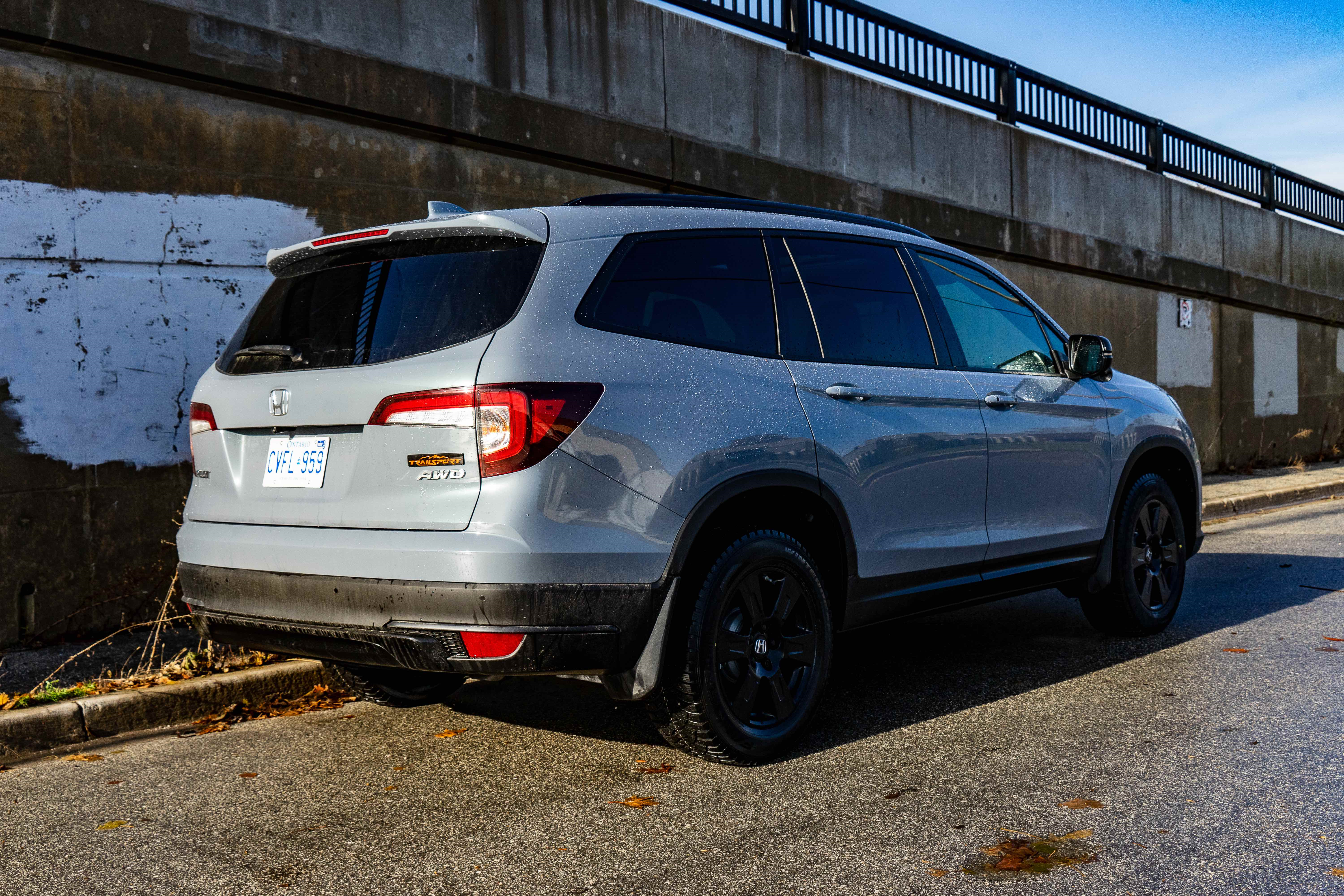 Puzzled, I cruise around to the back liftgate to make sure I’ve got the keys to the right vehicle. Sure enough, there’s an orange badge affixed telling me this is indeed the TrailSport edition of the Pilot, but bereft of any visible off-road prerequisites, what does that mean?

Seekers, adventurers, explorers. Regardless of which hashtag you feel fits best, the active lifestyle enthusiast has become one of the hottest commodities in consumer spending. And automakers have been quick to get in on the action: Subaru has recently introduced their Wilderness line, Toyota has extended TRD Pro to other models, Jeep has their Trail Rated Trailhawks and now Honda has TrailSport.

Sadly, unlike examples from the aforementioned competition, Honda’s TrailSport line really only adds a bit of ground clearance and some aesthetic changes to the mix. The Pilot I’m driving does sit 15mm taller than its stablemates, but that lift alone does little to earn it any extra merit badges. Approach and departure angles don’t substantially change (19.6/20.8 vs 19.7/21.8) and the lack of recovery points or underbody protections would cause me to pause before venturing down anything more aggressive than a rutted or washed out cottage or fire road. 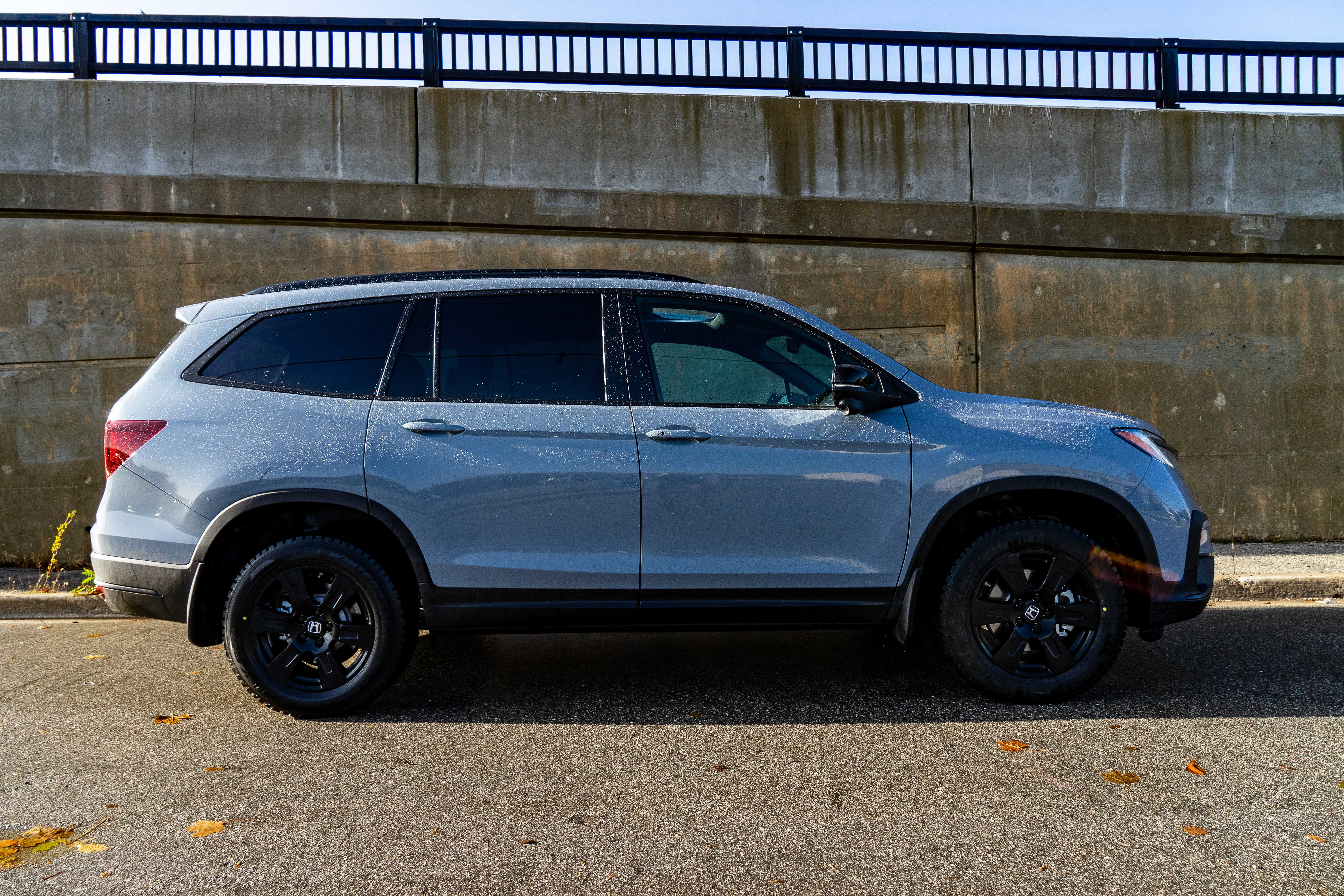 However, if that’s all you’re looking to do, the Pilot (regardless of trim package) remains a comfortable and cavernous way to accomplish that.

The interior, admittedly a little dated, ticks all of the necessary boxes. The heated and powered captains chairs up front are decently bolstered and supportive. Draped in black leather, the orange TrailSport logo is emblazoned on their headrests and matching orange accent stitching is employed on all three rows. There is an enormous storage cubby between the two front seats and a wireless charging station sits beneath the centre stack.

The 7-inch TFT screen is neatly integrated into the dash and I’m happy to report that media and HVAC controls consist of buttons and knobs. There is Apple CarPlay and Android Auto, although both are available solely via a wired connection. There are four USB ports in total but surprisingly the TrailSport forgoes a 115-volt outlet, so you may wish to grab an inverter if you’re the type to “plug-in” while “unplugged”: there are three available 12-volt power outlets. 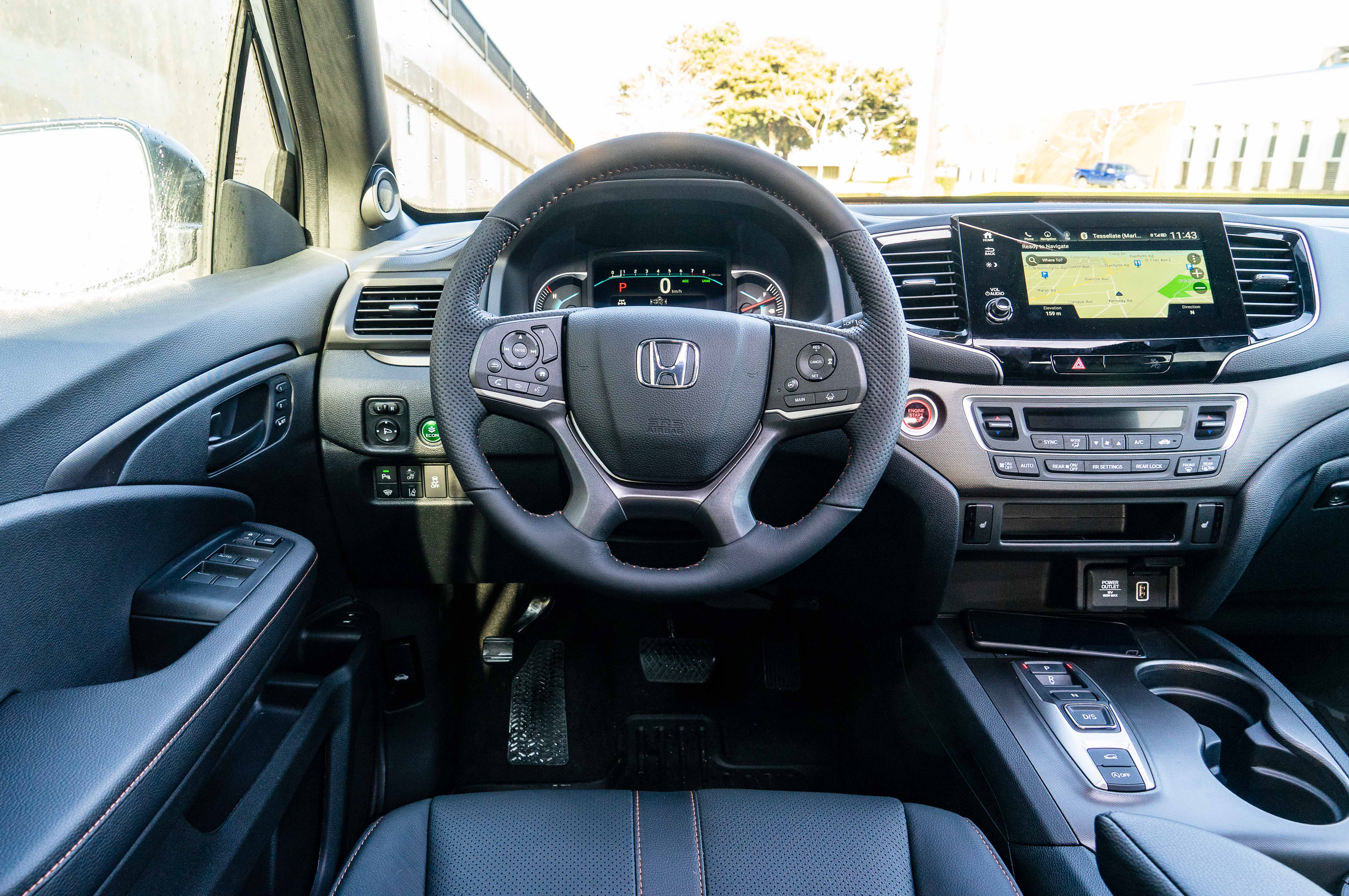 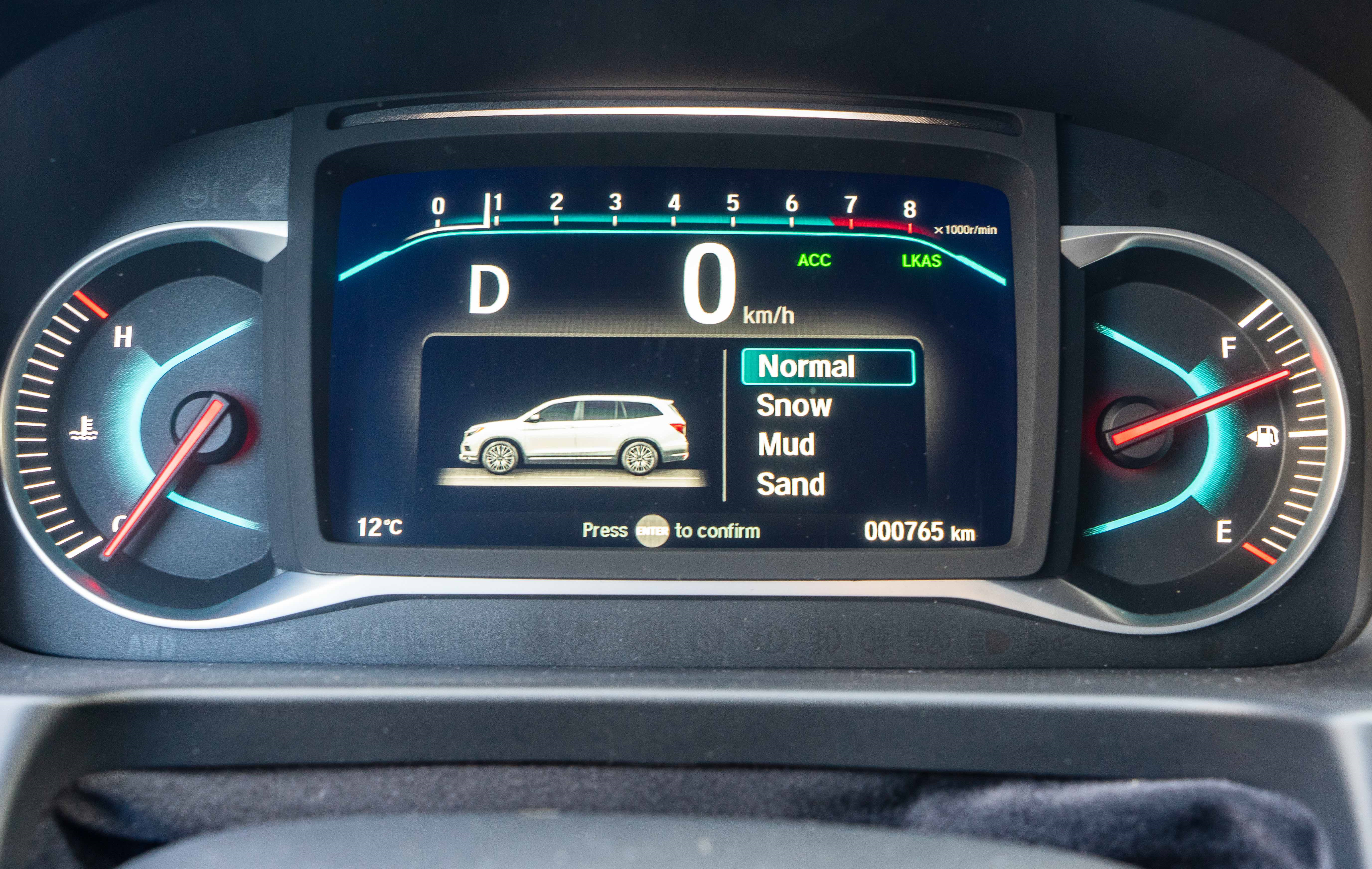 Passengers – even adult sized ones – have enough space to enjoy the ride regardless of which row they end up in, and access/egress to the back of the bus is easy enough. If you don’t need to make use of that third row, the Pilot TrailSport boasts nearly 1,600-litres of cargo capacity (which is the same for all Pilots), which should be more than enough for most campers or glampers.

From behind the wheel visibility is decent, and the TrailSport includes a rearview camera on the passenger side wing-mirror that activates when the right signal starts to click. Surprisingly one isn’t fitted to the driver side and the TrailSport does not include active blindspot monitoring.

Powered by a 280-horsepower, 3.5-litre V6, this Pilot moves with ample hustle. Despite the lack of a turbo, the torque curve starts low and develops linearly. Mated to a 9-speed automatic transmission, power is distributed via Honda’s i-VTM4 (intelligent Variable Torque Management) all-wheel-drive system. There are some switchable drive modes – Normal, Snow, Mud and Sand – that tailor throttle response and power distribution to optimise performance in a given setting, but don’t go looking for locking differentials or disconnecting sway bars. I experimented mostly with Snow mode as that was the extent of challenging terrain I experienced, but the white stuff wasn’t deep enough to warrant the transition.

I did find the transmission to be a bit stodgy in its gear selection process, hunting and pecking for an extra second here and there. Regardless, overall acceleration was confident and cruising at highway speeds spins the motor at a mere 1,500 r.p.m. There is a Sport mode that can be called upon to hold revs a bit longer before shifting but I found just disabling ECO mode made enough difference for day-to-day driving. Ride quality with the longer travel suspension feels about the same as other Pilots, which isn’t a bad thing at all.

What’s less than impressive, at least in my experiences, are some of the decisions made regarding user touch points. The gear selector is a collection of four separate buttons. In my week with the Pilot TrailSport these neither became intuitive nor enjoyable to use. Worse still, swapping between reverse and drive required me to look at the button I wanted to touch, rather than simply moving a physical shifter with eyes kept on the road. A tried and true shifter would eat up as much real estate and deliver a better user experience.

More puzzling, the parking brake continues to be a manually operated pedal assembly. While I’m certainly not opposed to a little old-school flair like this, it comes at the expense of a comfortable dead pedal. I don’t boast an E-width foot, but I still found the perch wasn’t wide enough to allow old lefty to sit straight.

With a newly redesigned fourth generation Honda Pilot rumoured to break cover in time for the 2023 model year, the current ageing edition isn’t without its shortcomings. But that being said, never once did I feel like I was missing out on anything essential. Where I feel Honda missed the mark was in its failure to equip any substantial off-road enhancements to coincide with the TrailSport branding, especially given what the competition has done and the fact that a modified Pilot scored a top-five finish in the Rebelle Rally a few years back. As it sits, this is really just an aesthetics package. 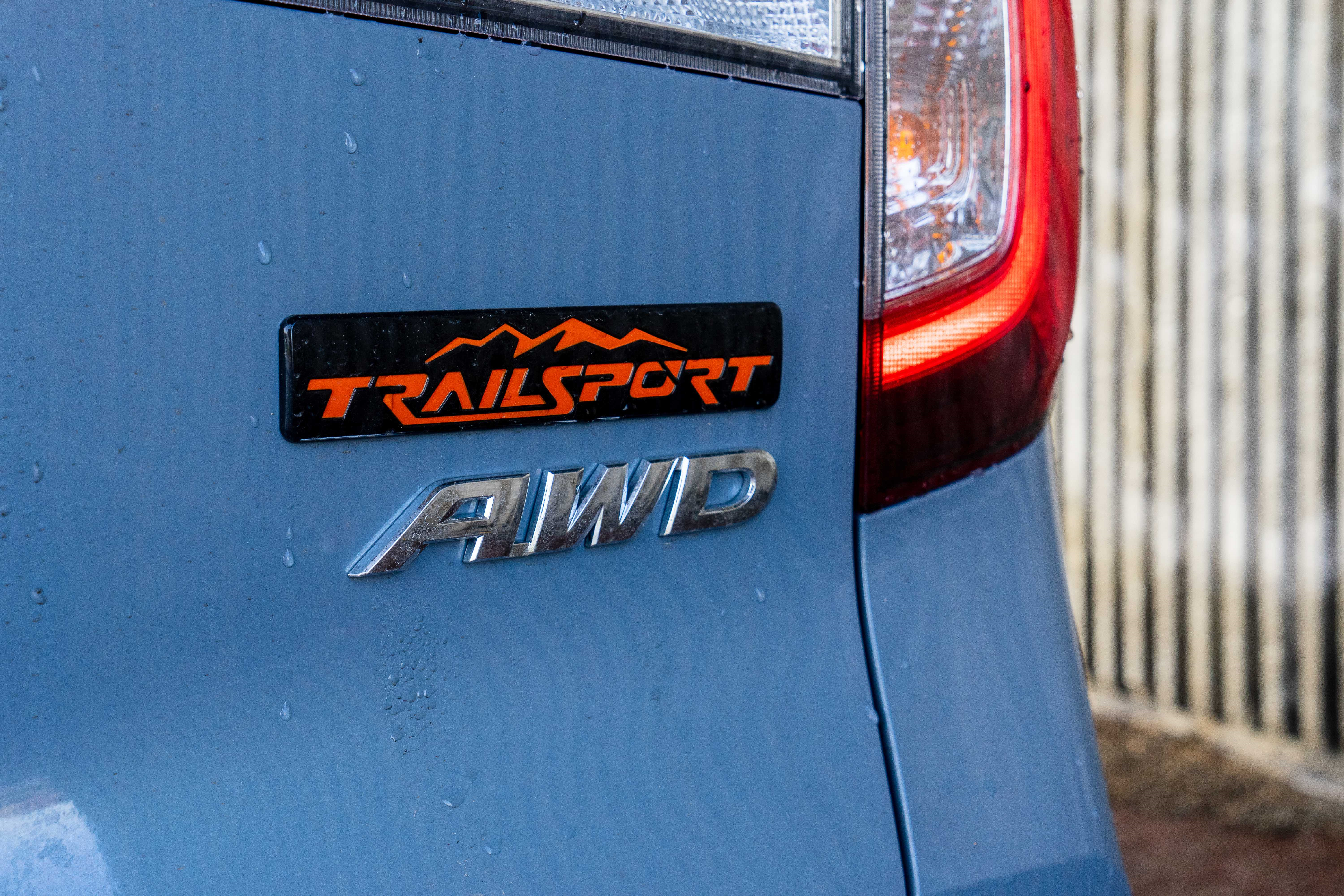 Whether or not that should sway your buying dollars depends entirely on how far you and your family hope to seek, adventure or explore. Canada Goose has built an empire out of making urbanites look as though they're enroute to clink glasses with Shackleton at the south pole, so I suppose there’s no real harm in simply looking the part, even if you’re just heading to the new, remote office.