Join the Conversation (0)
The market for compact sporty coupes has shrunk significantly over the years, especially for expensive ones, and as a result, there aren't a lot of them to be found. The BMW 2 Series Coupe is one but it sits unchallenged on its own little island, not unlike a Mazda Miata, which also doesn’t have a true competitor.

The Mercedes-AMG A 35, CLA 45, and Audi S3 are close but all are all 4-door cars, based on front-wheel drive vehicles. The Audi TT is a coupe, but it’s also based on a front driver and it’s even more expensive than the BMW.

The M240i and M2 were some of the best cars in BMW’s product lineup and we were sad to see them go. Thankfully this new one is a direct replacement, unrelated to the four door 2-Series Gran Coupe. The Gran Coupe is based on a front-wheel drive chassis, the same one you’d find under a Mini Cooper Countryman or a BMW X1. The M240i is a proper rear-wheel drive sports coupe, and in the case of this one, torque gets sent to the front wheels when necessary thanks to BMW’s xDrive hardware. 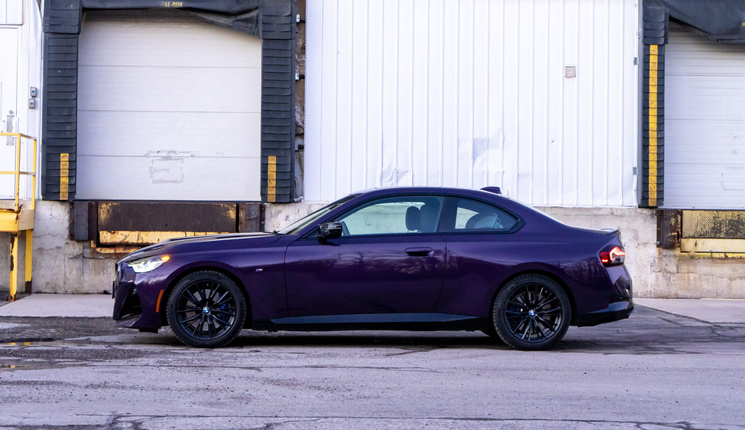 This new M240i shakes things up visually and although styling is subjective, there’s no argument to be made against the striking and perfectly named shade of Thundernight metallic coating this vehicle loaned to us by BMW Canada.

BMW seems determined to relive the polarizing Chris Bangle design era with its new extrovertly shaped cars and SUVs. They’ve probably gotten more flack for the M3 and M4 grilles than the “Bangle-butt” 7-Series from 2001, but you can probably attribute much of that to the rampant growth of social media platforms during the past two decades.

The 2022 BMW M240i takes the compact coupe’s styling in another direction altogether and the retro modern cues here are rather well done. The single lens headlights are a throwback to the 02 series sold during the 60s and 70s and the boxy fender flares bring to mind the much-loved E30 M3. 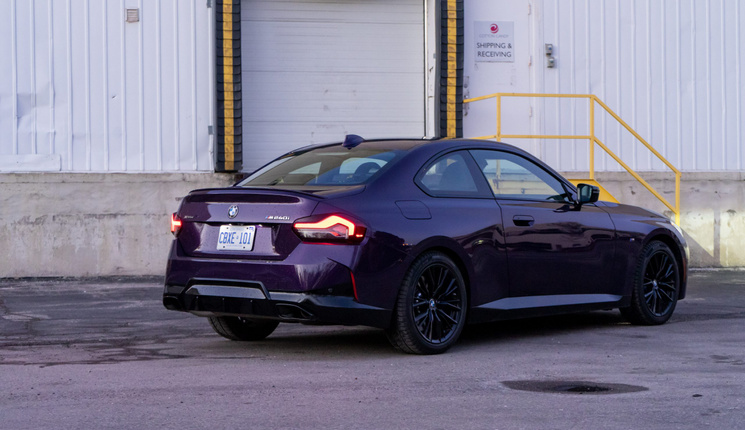 It looks like a caricature of a BMW coupe with an exaggerated hood sporting a prominent power dome, a stubby rear deck, and a wide stance. Rear taillights are pushed to the corners with an upside down L design that bucks BMW convention. It’s a look reminiscent of the BMW 2002 touring cars from the 70s with their squared-off proportions and upright greenhouses.

Things are more familiar inside with a condensed version of BMW’s interior design language finding its way into this new coupe like it has with just about every other BMW on sale today. While it might not win awards for excitement, the space is functional, ergonomic, and well put together. Everything works well and becomes familiar after a short time. A backlit M-themed motif adorns the door cards; a cool touch that I’ve never seen on another car before. The large 10.25-inch centre touchscreen sports the newest version of iDrive, and the 12.3-inch digital instrument cluster is no different that what you’d find in the brand’s much more expensive models. The driving position is spot on and it’s easy to find that “just right” seating position and settle into the coddling and supportive sport buckets. 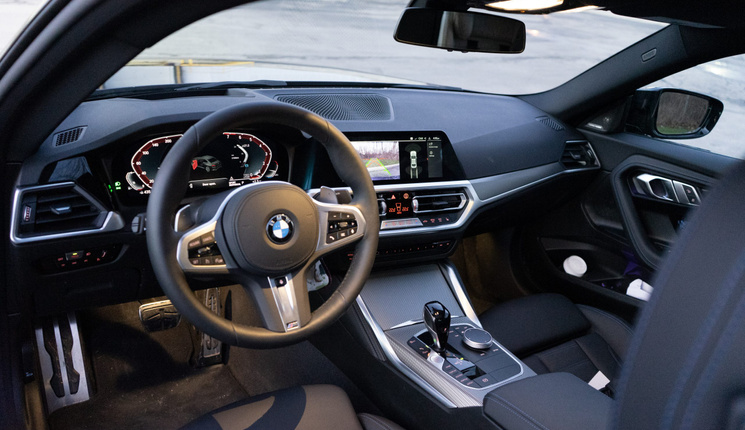 The rear seating area has actually shrunk, an odd bit of packaging for BMW, especially in a car that’s grown in nearly all dimensions.

Under the hood, BMW’s ubiquitous but stupendous 3-litre turbocharged straight-six sends 382 hp and 369 lb-ft of torque mainly to the rear wheels. A snappy 8-speed automatic transmission handles the gear changes and is equipped with launch control. Sadly, there is no manual transmission option here and there won’t even be one on the base 230i when it eventually goes on sale. Three-pedal junkies will have to wait for the 2023 M2 instead. Disappointing news, indeed.

All M240s sold here will also be xDrive only, and while a rear-wheel drive version is going to be produced, chances are it won’t be available in Canada. The all-wheel drive system on the M240i is largely invisible and directs the majority of engine torque to the rear wheels during normal conditions and only sends it to the front when wheel slip is detected.

Dial up the launch control sequence and you’ll have to hold on as all four wheels claw into the asphalt like a spooked kitty. Car and contents get jettisoned into the horizon with nearly as much force as the last generation M2.

Handling is as good as ever with tight body control and a light and playful feeling from behind the wheel. Grip is prodigious, even on winter tires, thanks to all-wheel drive, the increased body width, and the widened front and rear tracks. It’s more stable, and less skittish than before, a benefit from a wheelbase that’s grown by 51mm.

There’s a ride and handling balance that feels near perfect for a sporty coupe; it doesn’t punish you, even on downtown Toronto streets, which are easily some of the worst in Ontario. Adaptive dampers help here and they can stiffen up instantly when dialing up either “Sport” or “Sport plus” mode as you leave the city’s confines behind. These dampers can even take advantage of navigation data fed to them and prime themselves for an upcoming corner. Very cool. 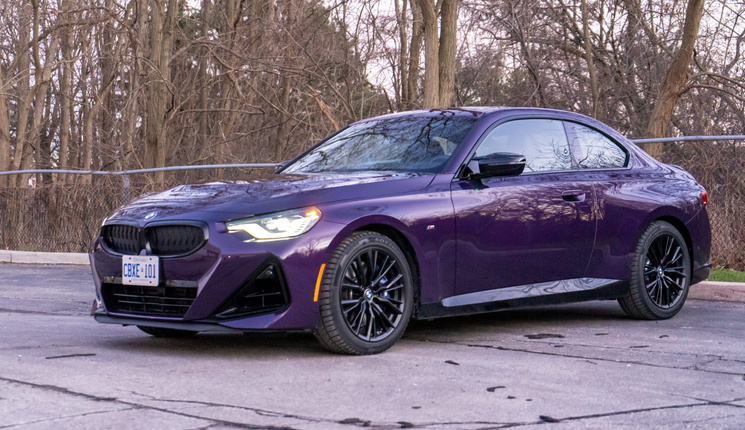 This new M240i xDrive is a seriously quick car. Car and driver clocked it doing the 0-60 mph run in a crazy 3.6 seconds, faster than the last M2 by a good margin. This speed is partially thanks to its AWD system but also because BMW is known to underrate its cars.

With even more power, the upcoming M2 is going to be a force to be reckoned with, but where will it leave the M240i? Do you wait to get the real deal M-Car or is the M240i good enough right now. It’s certainly not lacking for power. And with the price on my tester nearing $70,000, you’re already entering M2 territory so it’s not out of the question to plunk a bit more on top and get what you really wanted in the first place. I know that’s what I’d be thinking. The fact that an M2 is supposed to arrive with a manual transmission will also seal the deal for many.

In the wild, I rarely see a regular 2 Series, but I do see plenty of M2s and M2 Competitions. So in retrospect, the M240i does have a very real challenger and it comes from within. In a segment where there aren’t many buyers an M2 is likely going to be its biggest competitor.

On its own, however, the new M240i is one hell of sports coupe with more performance and capability than you’ d likely ever need. It’s still one of the most fun cars in BMW’s lineup and for now, at least, there’s nothing else like it.