All-new for 2020, the popular Mercedes GLE adds a heavy dose of luxury and tech.

Proclaiming itself originator of the premium SUV segment, the first Mercedes M-Class rolled off the line in Tuscaloosa, Alabama back in 1997 attempting to fuse a truck-like body with the sensibility and refinement of a Mercedes sedan.

The M-Class brought luxury and technology to the SUV like a Ford Explorer never could and it resonated with the public, igniting a trend that’s only snowballed over the last two decades into the cornucopia of choice we have today.

But dig a little deeper into the pages of history and a different story unravels, one that might not consider the Benz to be the pioneer in this department. Indeed one of the first real attempts at merging a 4X4 with comfort came from a brand that you might not associate with the words premium or luxury at all.

Three decades before the first M-Class hit store shelves Jeep made something called the Grand Wagoneer, a truck-based, wood-paneled, velour-lined piece of Americana that dug itself deep into the hearts of the public selling relatively unchanged for 29 years. It offered luxurious features unheard of in trucks of the era like an independent front suspension, air-conditioning, power seats, and an automatic transmission.

The M-Class might not have been the first luxury SUV to market but what it did do was reinvigorate the class at a time when North American streets were still sedan country paving the way for nearly every other automaker to eventually introduce their own premium SUVs.

Fresh off a full redesign the 2020 GLE, née M-Class, has to go up against some of the stiffest competition it’s ever faced and now more than ever it needs to stand out. It needs to do something different.

Competitors like the BMW X5 with its perfect blend of luxury and bullet speed, the annoyingly good Porsche Cayenne, or the effortless Lincoln Aviator each come with their own list of reasons to choose one over the other. 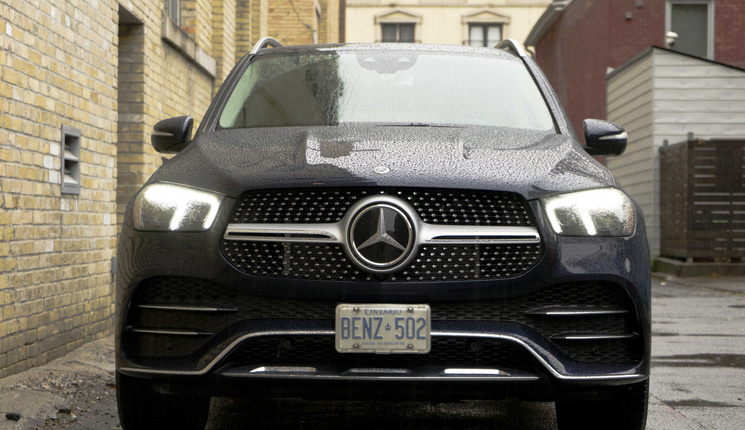 At first glance, the new GLE is rather similar to the one it replaces. The LED headlamps and taillamps have grown slimmer but gained some cool lighting graphics in the process. Hard creases have given way to smooth, contoured body panels and the GLE has grown slightly in nearly all dimensions, but most significantly, length has been added to the wheelbase resulting in more passenger room, especially in the second row. It’s also allowed Mercedes to offer an optional third-row bench that they say will fit 2 extra people up to 1.8 meters tall.

Visually, the cargo area is commodious but I just don’t see how stuffing two extra seats back there would be considered comfortable for anyone seated in them for longer than 10 minutes. I suppose if you have small kids and don’t want to move up to the full-size GLS, this option could work. But I’d personally rather have the cargo room. 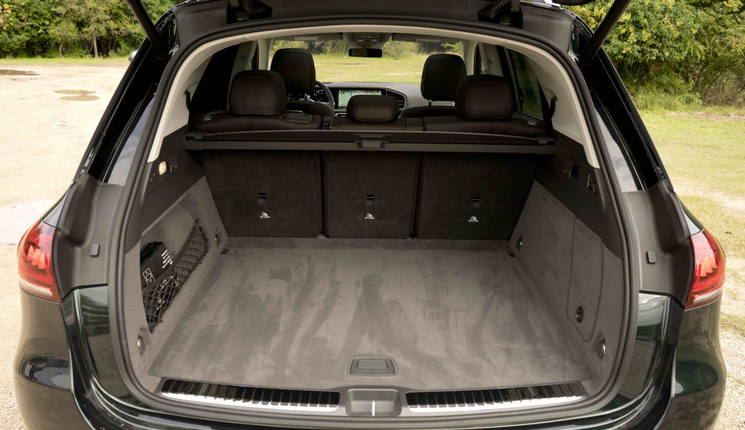 The rest of the cabin is spectacular with nicely textured leather covering every surface and the party-piece widescreen flat panel display serving as the instrument cluster and command centre. MBUX (Mercedes-Benz User Experience) cloud-powered infotainment with natural language recognition is standard fare here and a treat to use. Tell it where you want to go, or that you feel cold or hot, or that you want the seat heater on, or the sunroof shade opened. MBUX listens and then responds nearly instantly.

Even the augmented reality nav is a revolution in turn-by-turn guidance systems. It superimposes graphical arrows and street signs on a map overlay fed to the main screen by the front camera. Sitting in the GLE feels like you’ve been transported 10 years into the future. 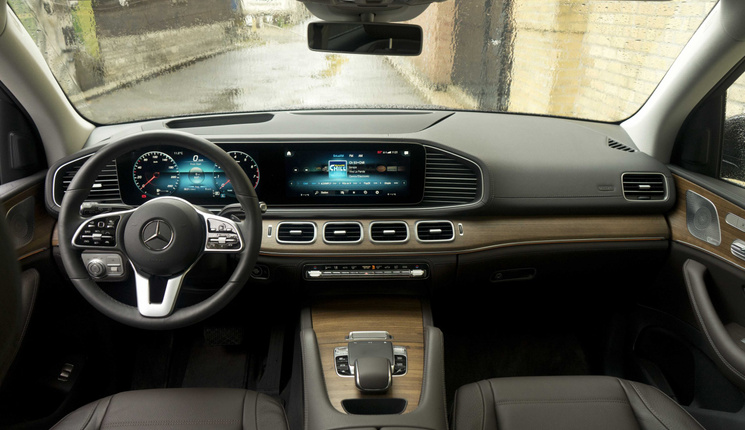 You’ll feel safe knowing that every GLE comes with a raft of standard safety and driver-assist tech that would have been sci-fi to Wagoneer owners back in the day. This goes beyond the blind-spot monitor and includes things like Pre-Safe which prepares occupants for an imminent collision by adjusting the seats, pre-tensioning the seatbelts, even closing all the windows and the sunroof. It will even play a specific tone through the stereo moments before impact helping prevent hearing damage that can occur during a crash.

The GLE 450 is middle grade slotting above the GLE 350, which is powered by a 2-litre turbo 4-cylinder. The 450 gets the straight-6 from the CLS, a mild-hybrid job pushing out 362 hp and 369 torques plus short bursts of 21 hp and 184 torques from the electric motor. The GLE 53 adds an electric turbo to that mix for even more power and the granddaddy GLE 63 is all-consuming with its 603 hp twin-turbo V8.

Back in the GLE 450 the powertrain is in one word—magic. You get a sonorous straight-6, a starter-generator plus hybrid assist motor instead of a flywheel, and a 9-speed automatic all working in harmony to deliver lag-free, silken power on demand. Energy captured from braking and coasting is stored and then turned into additional motive power when needed. And the generator also supplies the juice for a 48-volt electrical system.

Why 48-volts? It was necessary to run the E-Active Body Control system: A driver-controllable electro-pneumatic air suspension with multiple modes of operation. 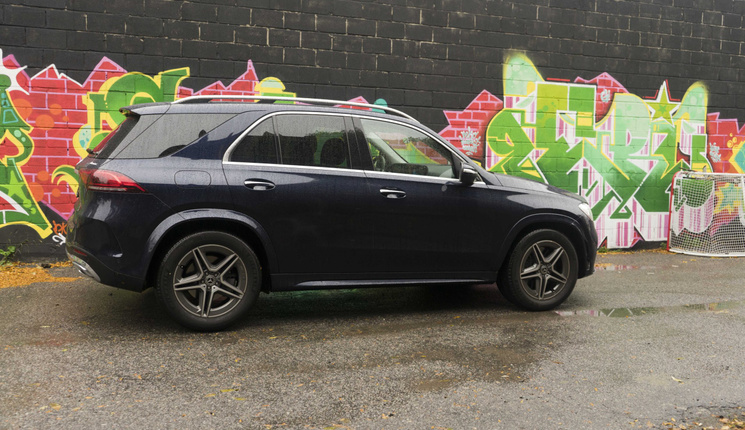 This is the SUV that bounces. Yes, it bounces. It can also lean into a bend like a motorcycle, and you can jack up or lower any corner of the vehicle that you’d like nearly instantly. My tester wasn’t equipped with this fancy suspension but I did get a chance to try it in Texas last year when Mercedes first launched the new GLE.

Being able to lean into corners is cool, a bit of a weird sensation like doing half a somersault but it actually reduces the lateral force felt while cornering ensuring undisturbed comfort for occupants. Turn it off and the heavy GLE exhibits less body roll than many full-fledged sports cars.

The other modes, while nice party tricks are rarely if ever going to be used in the real world. Bouncing or rocking might come in handy that rare time you get stuck in some deep snow but I somehow doubt that it’s worth the considerable amount of money it takes to unlock the option.

Just how much money does it cost to bounce?

E-Active Body Control is $6900. That’s a lot on its own but to get there the GLE must also be equipped with the premium package, the intelligent drive package, and the air suspension. All in you’re looking at just over $15,000. After spending a week driving a GLE equipped with the base steel spring suspension, I didn’t notice a large enough difference in ride quality to justify plunking down that much money. 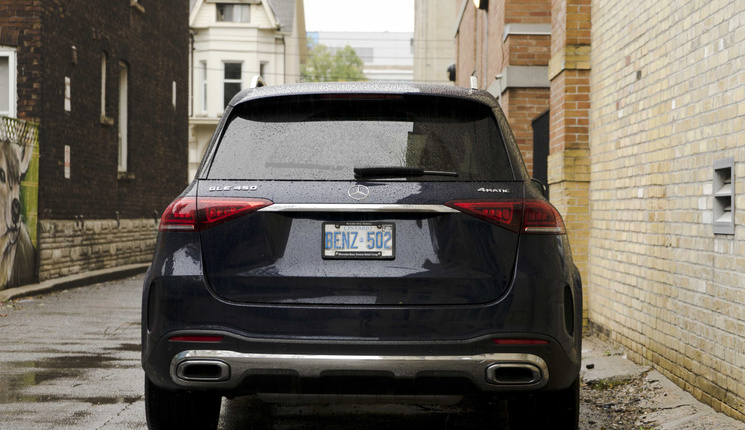 The ride on my GLE 450 tester was one step above pillowy with a cabin that could double as a meditation chamber. Even under full throttle only a small amount of engine noise makes it through, which is actually a bit of a shame cause this inline-6 makes some sweet, sweet music.

It’s quite frugal, too. With that flywheel generator providing an imperceptible auto stop-start system and instant electric torque masking any bit of turbo lag. You’ll save fuel without even trying.

Choose the Eco driving mode and the motor will disconnect from the transmission and shut off most every time you lift off the gas. And if you aren’t paying attention you’d never know it was happening. I was able to average 11.6 L per 100 km, a decent rating for a big, heavy SUV with all-wheel drive and 362 hp.

Where the Mercedes separates from the competition is with its magic-carpet ride and tomb-like isolation. This is in every sense of the word, a “luxury” conveyance. There is a sport mode but apart from delivering quicker shifts and a more responsive throttle, there’s no hiding the weight of this Benz. It can be cumbersome in the tighter corners if driven with any sort of enthusiasm. Dial it back a notch or three and the GLE’s calm demeanor and relaxed cruiser character surfaces. Driving dynamics take a back seat to comfort here and that’s no bad thing.

If anything it makes its intentions clear to the prospective buyer. If you want the sportiest driving experience, the Porsche Cayenne is the one to pick. If you want a bit of everything it’s BMW X5 all day.

The GLE feels much closer in comportment to Lincoln’s new Aviator, which goes to show you how far some automakers have come. Just a short time ago comparing a domestic product to a high-end German vehicle would have earned you a trip to the gallows but the new Aviator looks poised to steal some sales away from stalwart Benz supporters.

But Mercedes customers aren’t anything if not loyal and the new GLE 450 has some of the most impressive tech, a refined and serene ride, and an efficient powertrain keeping it near the top of the segment it re-invented nearly 30 years ago.