if you're looking for a tiny crossover, at just $1,600 more than the CX-3 this is definitely a better option

The CX-30 name doesn't exactly fit into the rest of Mazda's naming scheme, but does that mean a vehicle that doesn't fit either? Or is it just a sign that the crossover market has gotten so big, with so many options, that no alpha-numeric naming system can keep up?

It could definitely be the latter, since the crossover segment is quickly turning into the Big Three's offerings circa 1958. Remember back when you could get a sedan, coupe, pillarless sedan, hardtop coupe, wagon, convertible, and a few others that we can't even remember anymore, all based on one single model? Well, 2020 has you covered almost as thoroughly, offering crossovers in every size class, a few size classes that we're not sure really exist, and as conventional, rugged, and even crossover coupe styles.

That's why this is called the CX-30 and not the CX-4: the CX-4 already exists, a model sold in China that has a Subaru Outback-like blurring of the lines between wagon and crossover. Mazda couldn't duplicate that name here, and they already named the Mazda2-sized crossover the CX-3, so CX-30 it was.

Instead of being a more stylish version of the CX-3, a tiny gap that automakers are rushing to fill already, the CX-30 is a larger vehicle. One that slots in between the CX-3 and CX-5 as a bit of a Goldilocks entry in the market. The CX-3 is tiny, inside and out, and while the CX-5 isn't huge, it's larger (and more expensive) than many small families need. That leaves space for the CX-30's baby bear to be just right. 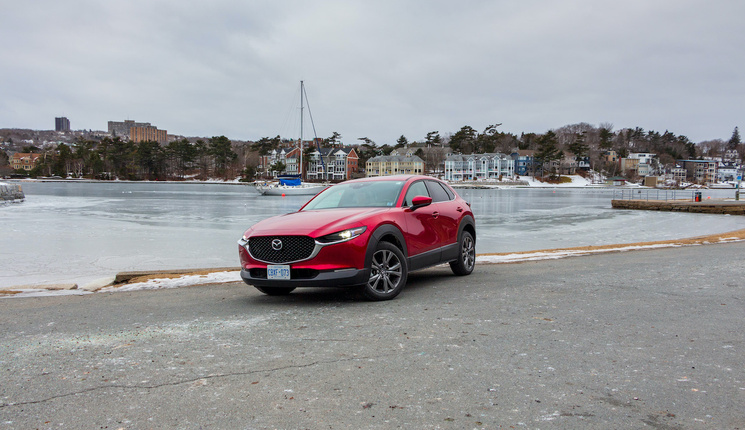 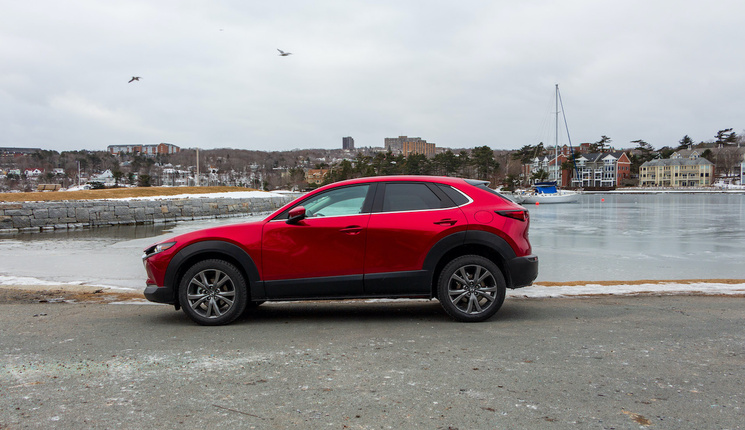 At 4,395 mm long, it splits the other two almost exactly in the middle, with a wheelbase that's closer to the CX-5 suggesting more space for people. It's 25 mm wider inside than the CX-3, though it feels even more spacious than that number suggests, and it's about the same amount taller.

Though it has that extra height, it offers up less headroom than the already cramped CX-3. Combine that with the wide A-pillar and its gradual slope and headroom for tall drivers (as well as visibility around that pillar) comes at a premium. It could be a bigger issue on the passenger side, since even on this top-spec GT that seat lacks height adjustment. Headroom in the rear is appreciably larger, as is shoulder and hip room, and while you won't be sitting stocky 6-foot plus passengers back there comfortably, that's not what this is designed for. Your average kids (and adults) will fit just fine, and it's a much better place to be than the CX-3.

Cargo space, too, is much improved over the CX-3, which has a very high load floor and small hatch opening. The CX-30 offers a lower load floor to make it easier to put stuff in the back and to let more stuff fit. With 572L of space behind the rear seats it has more than 100L more room than the CX-3, though strangely Mazda says the CX-3 has more space with the seats folded (1280 vs 1,528) but our eyes disagree with that assessment. 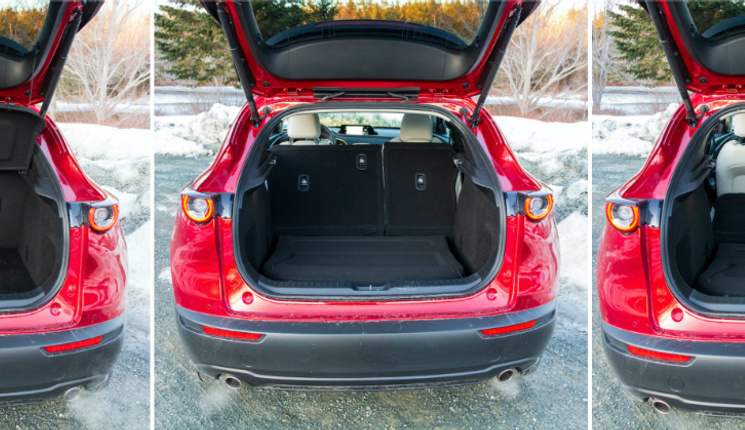 While it's not much bigger than the CX-3, and so less than 200 kg heavier, Mazda made the smart choice of putting the bigger 2.5L four under its sharply-contoured hood, at least on GS-spec and up. That means 186 hp and 186 lb-ft of torque, and while it's not the 200+ hp turbo that's now in the CX-5, it offers enough power for this smaller package. The 155 hp 2.0L is still available in GX trim, but since the bigger engine offers nearly the same fuel consumption, we'd go big.

Like all of Mazda's fours, this one is happy to rev, and while you'll know it's there it makes a pleasant sound and not an angry or uncouth noise near the top of the rev range like some of the competition's four-pots. Power delivery is consistent, with the exception of a strange flat spot right around 4,500 rpm. It feels like it could be the torque converter locking, but that's pretty high in the revs for that to be the case. In any event, after a brief pause at that spot on the tach, the engine starts pulling again. This top-spec GT gets cylinder deactivation to save some more fuel, and it's so transparent that we didn't know it was part of the system until we looked at the spec sheet.

Throttle tip-in is quick, especially from a stop, like it's permanently in sport mode. Of course, the actual sport mode is even quicker, and the whole system is almost enough to make us wish for a comfort mode. Almost. The six-speed auto is quick to snatch gears, and in typical Mazda automatic fashion is delightfully decisive. No hunting here, it makes a decision and sticks with it. Even if it picks incorrectly once in a while, the end result is better than the "ooops, let me try again" that ruins so many eight, nine, and 10-speed ‘boxes. 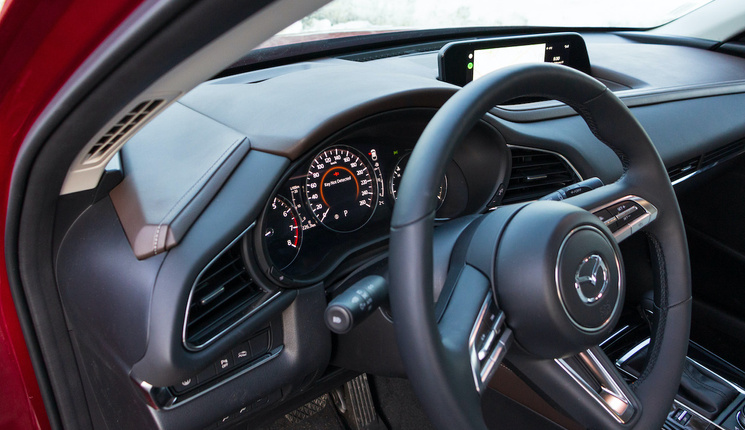 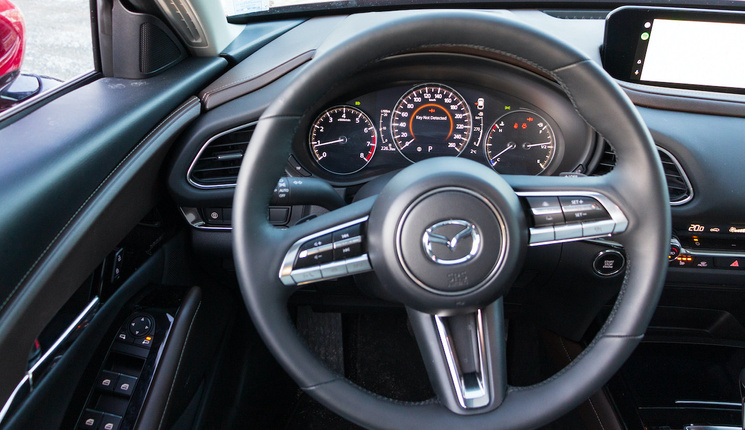 With the latest Mazda3, and now on this model, the automaker has added a newly updated version of its infotainment system. The Mazda Connect system runs on an 8.8-inch screen and gets Apple CarPlay and Android Auto in high-resolution. But the underlying interface is largely the same as the last Mazda system, and by today's standards it's starting to come up short. Changing radio stations, for example, if you have presets saved is a dial turn and a press, which is fine, but if you want to pick one that’s not a preset it requires multiple pushes of the dial and scrolling actions. Not to mention that if you pick, say, station 200 but really wanted 201, you'll need to do it all over again, scrolling through all 200 from the start.

The integrated phone connection takes some getting used to, needing many different combinations of jog, turn, and press in order to get the function you want since there's no touch on the screen. Features in some apps, like Spotify, were impossible to access. Once you have it doing what you want, though, it looks great. And the processor is quick, so you aren't waiting on menus to load.

Going big on the active safety features, Mazda has put blind spot alerts and rear cross-traffic monitoring on even the base CX-30, and the car's backup camera is high-res and works well even in the dark. Smart city braking comes on GS along with stop-and-go radar cruise, pedestrian detection, lane-keeping, and lane departure warnings. The top trim GT adds rear braking support and Mazda's neat traffic sign recognition that shows the sign on the dash or head-up display. 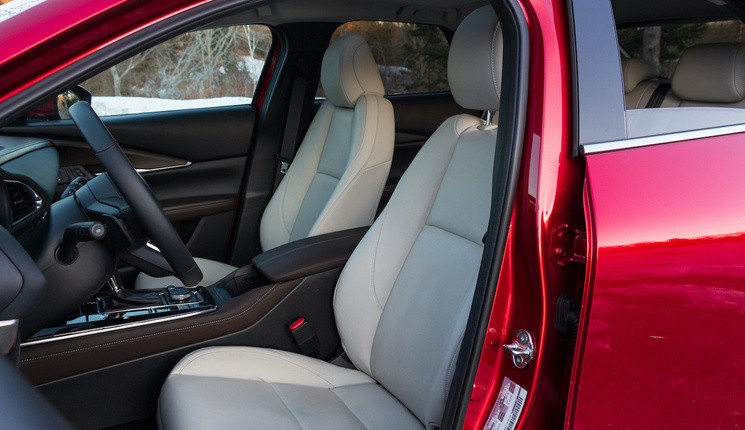 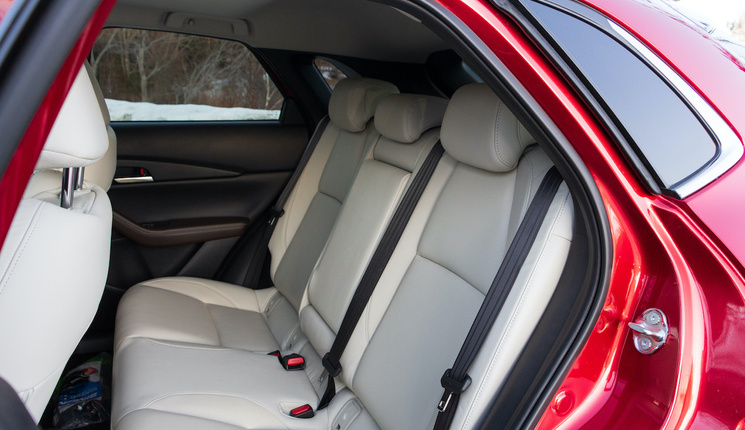 The interior is typical of Mazda's other designs, boasting class-leading finishes and materials combined with elegant shapes. This one also has heated front seats and a heated wheel. It doesn't get Mazda's top Signature trim and the wood finishes that come with it, but that's because this GT is already well into overlapping the CX-5 for pricing so it probably wouldn't get a big take from shoppers.

Ride and handling is Mazda's strong suit, and the CX-30 is no different. While they aren't using Zoom Zoom in their ads anymore, the steering in this crossover has plenty of it. Turn-in is sharp, aided by the G-Vectoring Control Plus system that adjusts power delivery and applies a touch of braking to improve responsiveness.

The CX-30 is jittery, though, on the road. Unsettled and antsy, like a middle-aged business traveller at the front of the plane, desperate for that cabin door to open to start a mad dash to the restroom. Or that person in every meeting just sitting there and bouncing their knee so hard the projector shakes. That's in a straight line, at least. Throw it into a corner and you can feel the CX-30's relief as the suspension loads like that traveller once they've found the restroom. 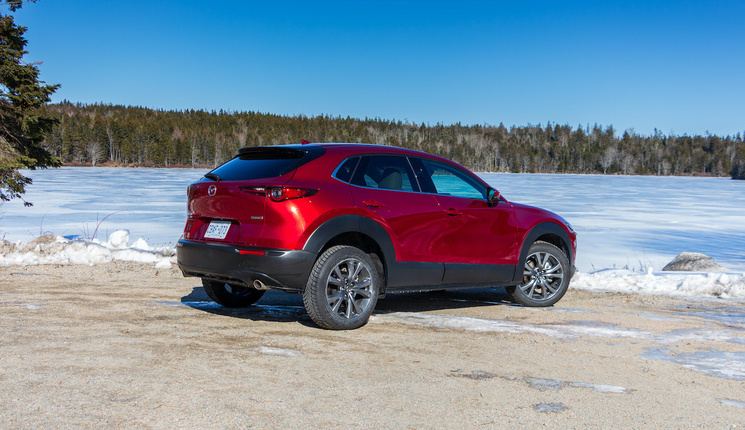 Despite the jittery ride, and stiff springs, it's very well damped. No never-ending oscillations over dips here. And, more surprisingly, even hitting large potholes or expansion joints doesn't send the cringe-inducing thwack through the cabin that is so common to small (and large) crossovers. Aside from the busy ride on the highway, which really never intrudes, this is an excellent-riding small crossover, and Mazda's suspension and structure engineers should take a well-deserved bow. And then glare at the infotainment system crew.

At first glance, the CX-30 looks to be filling a hole that wasn't really there. A wedge driven in to create a place in the market. But if you're looking for a tiny crossover, at just $1,600 more than the CX-3 this is definitely a better option for most buyers. Unless, of course, you want a stick, in which case the FWD CX-3 GX is your only choice.

Instead of being the odd-car-out, Mazda has made a vehicle that does a better job of being a compact crossover than the model that slots under it. Call this one just right. As long as you don't mind the overly funky design of the very back end of the vehicle.