Since then the Sonata has gone through one of the most spectacular metamorphosis for a mid-sized sedan.

Before, the Sonata was always playing catch up with other European and Japanese manufacturers until the introduction of the sixth generation Sonata in 2009. This was when the Sonata started to be taken seriously as a contender with its fresh body styling and competitive drivetrain.

The new eighth generation, introduced in 2019 as a 2020 model, is certainly turning heads. The Sonata has morphed from a follower to an outright leader in its category. The exterior styling is now as far removed from the earlier models as it could possibly be, and matched to a more refined interior.

Not only has the Sonata’s styling been changed inside and out, a wide range of electronic enhancements and driver assist technologies have also been added, especially in the Hybrid I was testing.

The Sonata Hybrid is certainly pleasing to the eye, the large front grille on this hybrid is different from the regular model and is now made up of horizontal chrome-finished slats that incorporate active shutters to control airflow. The bumper is smaller and is split from the grill by a chrome strip that runs between the two smaller air intakes. Differentiating the Hybrid from its gasoline sibling is small (and lighter) 17-inch alloy wheels. 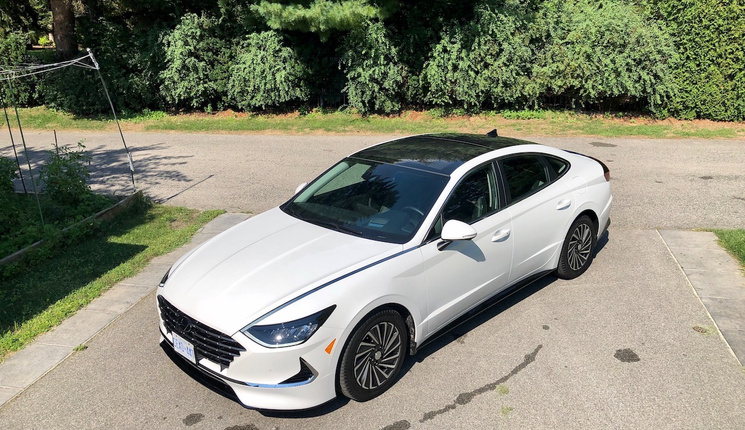 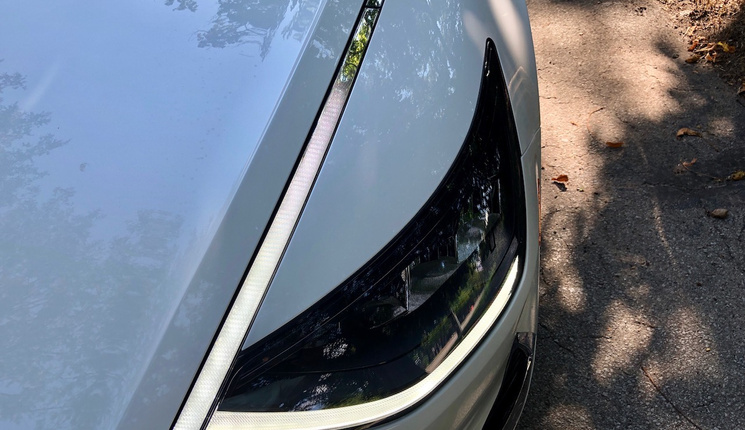 Another visual difference between the regular gas-powered Sonata and the Hybrid is the addition of a standard solar panel roof. This solar panel roof isn’t just a sales gimmick, as it not only charges the 12-Volt accessory battery but its tops up the lithium-ion battery as well,  a first in the Canadian marketplace.  Just parking the Sonata Hybrid in the sun for six hours can extend the electric range by just under 4km. Hyundai claim that this can add up to 1,300km of electric driving range in one year.

For such a technically advanced car the Sonata’s cabin is fresh and minimalistic. The dash is uncluttered with a 10.25-inch widescreen display sitting high on the dash. The driver’s 12.3-inch instrument cluster is bright and easily read. One great feature incorporated into it is the side-view cameras that show the blind spots along the side of the car when the indicators are used. The images are clear, and I found myself using these more that the external mirrors when turning.

Simply, the whole layout of the dash is practical and it is obvious the designers have spent some time ensuring all controls are where they should be and make sense.

The leather-liveried seats are comfortable and supporting, with both front and rear seats being heated. The front seats are the only ones ventilated.

Under the hood is a 2.0L four-cylinder engine that is linked to a 38kW electric motor that pushes out 192hp from both the engine and electric motor combined, torque has a combined rating of 290 lb-ft. What is unusual is that Hyundai has chosen a conventional six-speed automatic transmission in favour of the more common CVT transmission associated with a hybrid drivetrain. 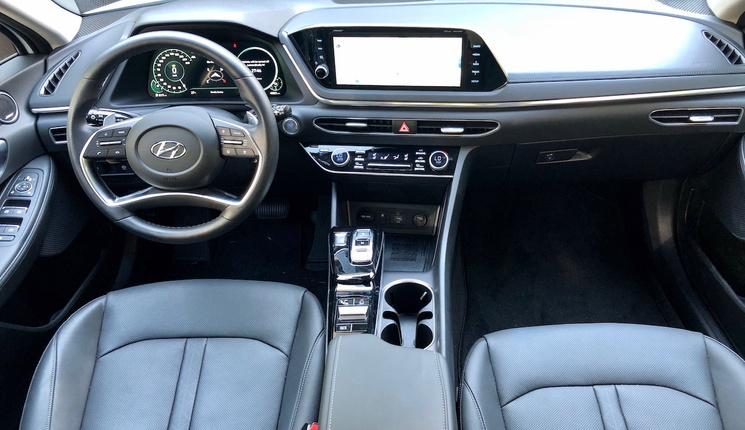 The Sonata Hybrid drives like its gas siblings. There is no fandangled learning curve or set up to take advantage of the electric power.  Acceleration is more than ample in and around town and extremely quiet. Getting up to highway speeds is uncomplicated and smooth, gear changes are quick and precise, there is a little more engine noise when accelerating hard, but this settles down when cruising along.

Braking does feel a little different due to the battery pack regeneration. It will feel strange when used for the first few times, but soon becomes part of everyday driving.

Fuel efficiency is certainly noticeable, I didn’t try to hyper-mile but I was more conscious of my driving technique which kept my average fuel usage under five litres per hundred kilometers.  There are four drive modes available - Eco, Comfort, Sport, and Smart modes that gives the driver a choice depending on driving conditions and required fuel economy.

The Sonata Hybrid is only available in the Ultimate trim level – that means it comes fully loaded with all the bells and whistles, including a crisp head-up display (HUD) and the usual driver and safety enhancements.

The Sonata Hybrid is a no brainer when fuel economy is a top priority without losing out on any creature comforts. The Hybrid has a total range of over 1,100kms that could, in theory, be extended with proper driving technique and use of the clever solar panel roof.

The Sonata Hybrid Sedan has come of age and has now outclassed its main European and Japanese competitors and might just prove that the sedan is still going to be around a lot longer than we think.