Join the Conversation (0)
The 2020 Dodge Challenger feels like the only “true” muscle car left on the market. Yes, the Mustang and Camaro, its direct competitors haven’t gone anywhere but the only muscly thing about those two is their V8 motors.

For Ford and Chevy, targeting sports cars from across the pond has led them down a path of refinement and sophistication not present in their original formulas. As a result they’ve become exactly what they weren’t to begin with—sports cars.

The Challenger, penned on a large, heavy skeleton remains steadfastly the opposite. It’s not a track rat meant to take on the Nurburgring’s finest and it doesn’t have modern dual overhead cams or a digitally enhanced cabin. It’s raw, down-to-earth, and stubbornly old school.

In Scat Pack spec, the Challenger is 6.4-litres of Detroit iron wrapped in one of the best retro-modern silhouettes ever penned. I could stare at it for hours. It drips with a rebellious attitude and isn’t like anything else on the road. Dipped in F8 Green this particular Challenger exhibited the same degree of neck-craning from passersby as if it was a bright orange McLaren. 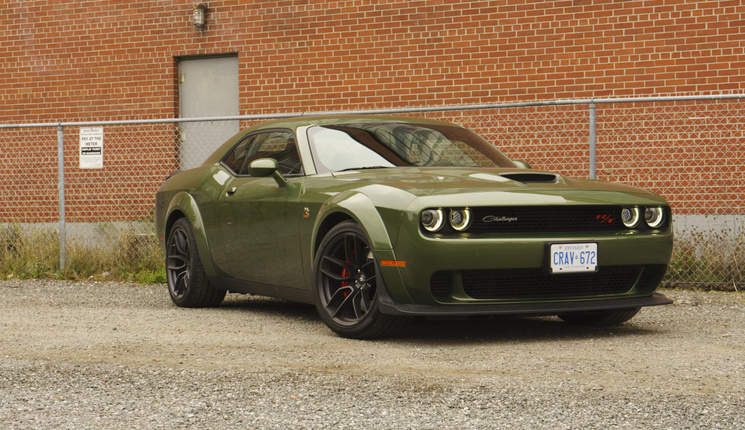 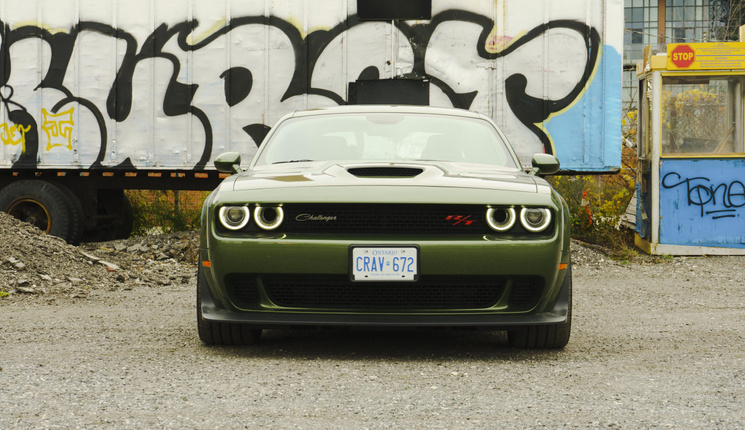 Things get even better in Widebody guise. Bulging fenders add 3.5 inches of overall width but can barely contain the ultra-wide 11-inch wheels and 305-section 20-inch Pirellis at all four corners. With this much meat on the wheels and a suitably stiff Bilstein adaptive damper setup, the Challenger Widebody can generate nearly 1g of lateral grip in the corners but don’t think you’ll be setting any lap records here. The Challenger’s girth means that as capable as it is, it’s just more comfortable between traffic lights or on a good b-road than it is tearing up corners at your local racetrack. Its approach to handling is less about finesse and more about getting the pavement to submit through brute force.

With 9 different ways to spec a Challenger from a mild V6-powered cruiser to an earth-rotating Hellcat Redeye with over 800 horsepower, the Scat Pack you see here represents the middle of the road in the lineup. This is medium roast coffee at its best, but the optional Widebody kit and sonorous 6.4-L V8 that develops a not so medium 485 hp gives the Challenger an extra caffeine kick.

The Widebody kit adds $8000 to the bottom line and the inner teenager in me feels like it’s worth every penny, adding even more drama and visual flare to a car that was already the very definition of badass. 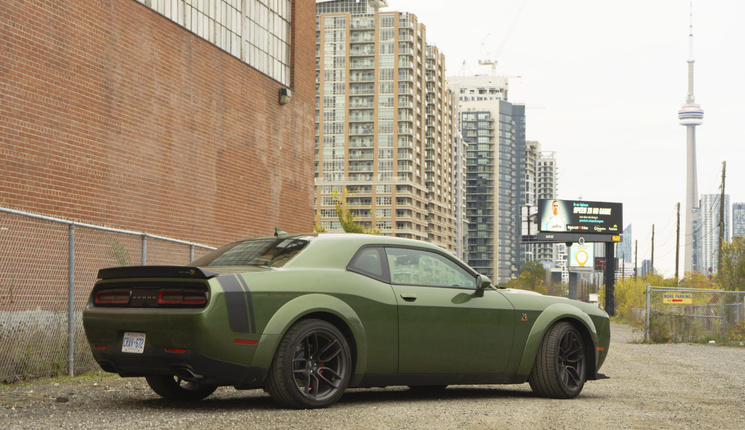 I got the warm fuzzies when I noticed my tester was equipped with the six-speed manual. There aren’t that many ways to get a V8 engine and a true manual anymore which makes the Challenger that much more appealing, even if it’s about as big as a cruise ship.

I grew up in the late 80s and 90s, so I don’t know what driving was like in the 60s but the Challenger makes it feel like I was taken back to that era. You get into this impossibly long coupe through a door that opens nearly 90 degrees and step into what you think has got to be a roomy cabin but ends up smaller than you expect. Sort of like a reverse TARDIS. It still has more room than either the Mustang or Camaro and the back seats are easily the most usable.

Interior materials aren’t exactly top-notch, especially at this price point, but major controls are placed for easy access and are all canted towards the driver, including the eight ball capped gear lever. Infotainment duties are handled by the excellent Uconnect system and despite the cabin’s dated appearance, it’s all business in here and it’s easy to just get on with driving. The one thing I couldn’t get over was the foot-operated parking brake, something you’re more likely to see in an old minivan than in a modern car.

The Tremec 6-speed’s throws are long but the gates are widely spaced and the lever moves through them with a crisp mechanical feel. The clutch is heavy and getting the shifts just right requires a bit of patience and finesse, but once you do you can make the Hemi out front sing its soulful song. 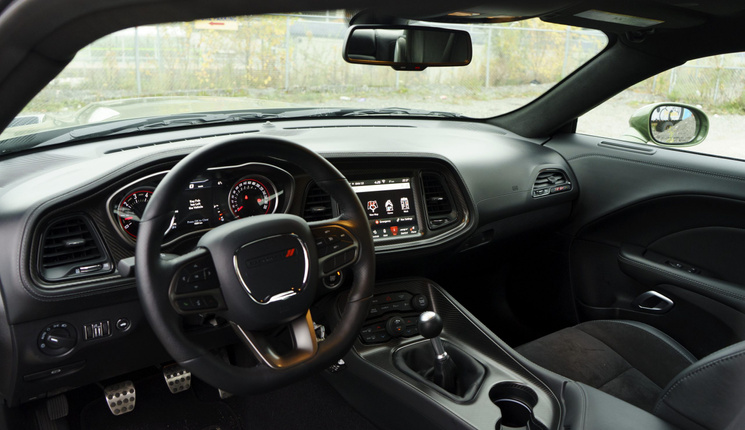 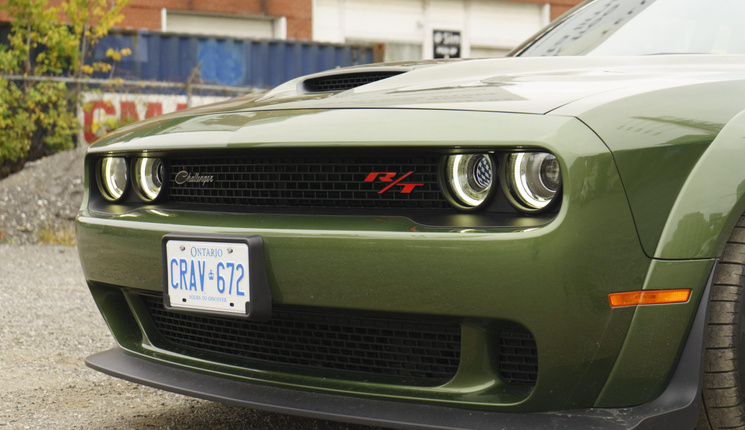 Displacing 392 cubes, this V8 makes it power with big lazy revs. Its sonorous music might be my favourite pony soundtrack. It goads you to explore its deep power reserves and watch the great slab of hood in front of you rise up and reach for the sky as you bury your right foot into the carpet.

Like any good muscle car, the V8 dominates this experience. It doesn’t hide behind two feet of sound deadening and it doesn’t need any artificial noise pumped in to “enhance” its sound. It’s a pure mechanical experience and coupled with the three pedals in the footwell, it’s one that gets less common with each passing day.

Just because the Challenger is as big as a house, doesn’t mean that it completely falls apart when you show it a corner or two. With ultra-wide, sticky tires, and adaptive Bilstein dampers, body roll is minimal and the amount of grip on hand means you can push pretty hard. It’s only under heavy braking or through the tightest of turns that you feel the size and weight of the thing. The Mustang and Camaro both fare much better here, but short of putting all three on a track together and playing for pink slips, the average driver isn’t going to care.

What they are going to care about is how the car looks, how it sounds, and how it makes them feel. Taken in that respect the Challenger is easily the most captivating. It looks like a slice of Americana delivered from the 60s and its design will look good forever. If you want the true muscle car experience, it’s the only one that qualifies.